Bringing plan-making back into planning

Amelia Thorpe reflects on Barangaroo and lessons from Part 3A.

The proposal for Barangaroo South.

Among the many issues raised in the discussion of the Barangaroo redevelopment in the May/June issue of Architecture Australia, the fact that special planning procedures will govern assessment of the project is one that resonates with many recent development controversies. While the New South Wales call-in system leaves much to be desired, it has perhaps been unfairly targeted: the legislation governing planning begins with lofty goals, and its failure to achieve these cannot be attributed to the call-in system alone. Planning in New South Wales, as in many other places, has focused on development control at the expense of positive plan-making. Debates have thus degenerated into conspiracy theories, allegations of backroom deals and dismissal of NIMBYs, leaving little space for the constructive deliberation that cities such as Sydney so desperately need.

The New South Wales call-in system was introduced as an amendment to the Environmental Planning and Assessment Act 1979 (EP&A Act) in 2005. With the addition of Part 3A, it provides for a “streamlined” approval procedure for projects deemed by the minister to be of state significance. In contrast to the standard consultation and review requirements under the EP&A Act, this introduced a wide margin of discretion into the planning system. Once Part 3A is declared to apply to a project, community and intra-governmental consultation and environmental impact assessment requirements are at the discretion of the Director-General of Planning, the minister may ignore breaches of environmental and heritage laws, and grounds for legal challenge are severely constrained. Entry into this discretionary category is also a highly discretionary process: the minister need only be of the opinion that the project is of state or regional planning significance to declare Part 3A applicable.

Barangaroo was brought within the purview of Part 3A in 2007, yet concerns about public consultation for the redevelopment of East Darling Harbour were already widespread. Complaints about lack of consultation and reports of undue influence by certain groups date back to the announcement in 2003 that stevedoring leases would not be renewed. The formation of the parameters for the 2005 design competition was similarly non-consultative and, despite professing to be an ideas competition, the brief set such strict requirements as to leave entrants little more to do than distribute prescribed uses across the site. The declaration that Barangaroo would be assessed under Part 3A merely confirmed perceptions about the government’s determination to “get on with it.”1

While Part 3A has been widely criticized, it is symptomatic of a much deeper problem. In the wake of the green bans, the EP&A Act was introduced at a time of broad consensus about the need for more sustainable and more participatory development processes. The Act was widely applauded for its efforts to balance social, economic and environmental goals, to promote the sharing of responsibility among different levels of government and to foster participation by the community in plan-making and assessment. In practice, however, the system has focused on regulation of development rather than positive plan-making and on formal consultation rather than meaningful deliberation.

Consultation in New South Wales, as elsewhere, is typically conducted late in the development process and prioritizes (or, in many cases, does not go beyond) the interests of neighbouring landowners. The recent Barangaroo public forum is a case in point: tickets reportedly sold out before the event was announced and, with over 70 percent of community invitations going to local residences and over 8 percent of tickets going to the contracted developer, little scope was provided for genuine discussions of broader public interest. Since the benefits of development tend to be diffused (increasing the supply of housing, generating employment opportunities or tax revenue) and the costs local and often hard to predict (particularly the impact on real estate values), prioritizing the voices of neighbouring property owners tends to encourage opposition (as behavioural economists have demonstrated, most people fear losses more than they value gains) or to focus discussions on superficial issues such as managing impacts during construction. In turn, this encourages consultation to be treated more like notification and the DAD (Decide, Announce, Defend) approach to be substituted for the participation promised by the EP&A Act.

The result of this approach is antagonism on all sides. Communities complain about their powerlessness against big developers, developers bemoan the delays imposed by consultation, governments lament their inability to deliver infrastructure and encourage investment, and those concerned about development proposals attract an increasing number of pejorative labels: NIMBYs (Not In My Backyard), NIABYs (Not In Anyone’s Backyard), BANANAs (Build Absolutely Nothing Anywhere Near Anyone), NOPEs (Not Even on Planet Earth), CAVE people (Citizens Against Virtually Everything) and NIMTOs (Not In My Term of Office).

It is here that Part 3A comes in, with a promise to “remove unnecessary red tape and bureaucratic delays and ensure New South Wales remains a great place to invest and do business.”2 Similar factors have prompted similar efforts in other jurisdictions, ranging from ministerial call-in powers under the Planning and Environment Act 1987 (Vic), the Land (Planning and Environment) Act 1991 (ACT) and the Sustainable Planning Act 2009 (Qld) to a new system for nationally significant infrastructure in the UK’s Planning Act 2008.

Despite their prevalence, these efforts to “streamline” consultation are misguided. As the Part 3A experience demonstrates, discretionary call-in powers have not resolved antagonism between community groups, developers and government, but they have attracted strong criticism from a wide range of groups. Part 3A is widely acknowledged as a factor in the unpopularity of the New South Wales state government, and the Opposition says it will repeal Part 3A if elected in March 2011.

What is needed is not to sideline the community, but to engage the public – in its broadest sense – in positive plan-making. Communities must be able to do more than seek minor modifications to projects, and must be required to participate in trade-offs – for example, whether growth should be accommodated in peripheral expansion or densification of existing areas – rather than simply oppose development. Groups other than neighbouring property owners must also be given a voice, ensuring that the debate goes beyond home owners’ efforts to protect their investments. Providing opportunities for public participation in plan-making, rather than mere development control, will enhance both the legitimacy and the robustness of planning decisions.

More meaningful consultation is necessary to address the concerns already expressed about development processes but also, and more fundamentally, to engage groups not typically heard in planning discussions. Increasingly, it is recognized that the current system imposes costs well beyond delays for developers. Constraints on development benefit those already established in the land market, with significant adverse impacts on minorities and low socioeconomic groups; established owners have more power to express and enforce their preferences through influence over planning outcomes. (Interestingly, this prompted a plea from one advocate for affordable housing in New Zealand for the introduction of ministerial call-in powers.3)

Call-in powers such as Part 3A are not the only approach being taken to address concerns about planning processes. Deliberative democracy – techniques such as citizens’ juries, planning cells, consensus conferences, consensus forums, multi-criteria analysis conferences, study circles, televotes and twenty-first-century town meetings – are being used in Europe and the US to engage the public in plan-making, moving debates away from development control to positive, proactive decisions for the future of cities. In Australia, Alannah MacTiernan trialled a number of deliberative democracy techniques during her term as Minister for Planning and Infrastructure in Western Australia. These fed into the development of a strategy intended to make Perth the world’s most livable city by 2030. While the long-term success of that strategy may be doubtful, particularly given the subsequent change in government, the overwhelming response from participants was positive. In the short term at least, the process achieved positive outcomes in overcoming opposition from powerful interest groups and developing a sense of community ownership of and support for the plan.

From Barangaroo, as from other major projects, we must demand much more. As a community we must seek to be involved not just in determining how high buildings should be or whether the waterfront edge is straight or curvy, but in meaningful choices about the development as it relates to the city. Is another city park really what the community wants to trade for this prime foreshore development site? Would we prefer a better public transport system, to address the housing shortage or simply to provide for other public space in other locations (perhaps a new state park with real conservation value, rather than Keating’s faux-headland)? More fundamentally, we must move beyond even these sorts of one-for-one trade-offs. Rather than regulating development in a reactive, ad hoc manner, positive plan-making would enable us to set robust development objectives and priorities for the future of our cities.

1. As Paul Keating said two months before that declaration in 2007, “… we have got, I think, as democratic a process, as consultative a process up here as it’s possible to have. You know, there’s tons of articles in the Sydney Morning Herald about it, in the popular press, on radio. We’ve had these entries, etc. Now, you can always have more, there’s no doubt about it. But at least the government’s getting on and doing it …” Design Quarter Talk, Powerhouse Museum, May 23, 2007. Available at: www.dhub.org/articles/932.
2. NSW Department of Planning, Infrastructure and Natural Resources, “NSW Government’s planning reforms: Winning jobs and investment for NSW” May 2005, available at: www.planning.nsw.gov.au/planning_reforms/p/dar_summary.pdf.
3. Peter Fuller, “What Price Participation? Property Rights, Planning and Distributional Effects,” paper presented at the New Zealand Centre for Environmental Law Conference, Auckland, April 2009.

Bringing plan-making back into planning 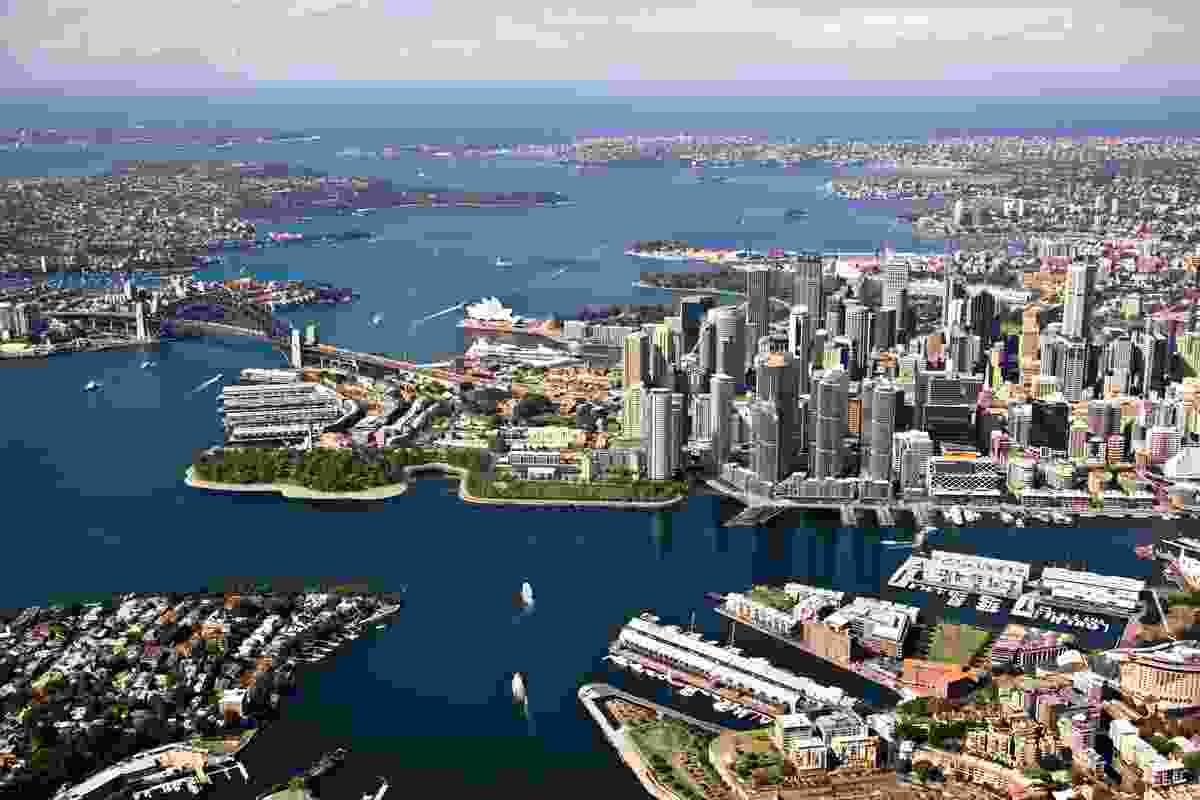 The proposal for Barangaroo South.