Courtrooms are brought to the edge of the building to show transparency.

Courts of law have an intrinsic social role: as public buildings, they express the values of justice, fairness and openness that are seen to underpin a democratic way of life. The newly completed Brisbane Supreme and District Courts by Architectus and Guymer Bailey Architects, the outcome of a competition won in 2006, expresses these values through a reduced architectural language that succeeds in representing and fixing the courts in the public realm of the city without any concessions to formal exuberance.

In the courts’ location at the western end of George Street, the architects saw a unique opportunity for the completion of a key colonial civic axis. With the Queensland parliament at its eastern end, the state executive functions at its centre and the courts precinct to the west, a new civic context is created, representing the democratic separation of powers both symbolically and spatially. The architects’ decision to organize a major public square delimited by the pre-existing magistrates court and the new supreme and district courts means they have created a “citadel of justice,” enhancing the civic presence of George Street and creating an urban tension rare in the heart of Brisbane’s CBD.

The development of a perpendicular axis through the courts site linking Brisbane’s South Bank across the river to the Old Windmill on Wickham Terrace is a strategy that embeds the complex in its urban setting. The Tank Street axis running across George Street was prefigured in Architectus’s design of the Gallery of Modern Art at South Bank, which established a sightline to the city and oriented the building to the CBD grid. The courts building steps back from this visual axis, allowing a link to be formed across the new public square to Wickham Terrace and a hillside park. With the new Tank Street pedestrian bridge in place the link has become a physical one, inviting public use of the new urban space and creating a sense of openness and accessibility to the courts precinct.

The courts project has been conceived with the conviction that a well-designed building can contribute positively to the administration of justice and its significant mission without the necessity for an overt expression of the monumental. The architects have eschewed a conventional representational facade in favour of the clear external expression of the functional program of the building – the simple demonstration of inner function as outer form. This strategy seems to align itself with the theoretical positions of some contemporary European architects, demonstrated through projects such as Rem Koolhaas/OMA’s Netherlands Embassy, Berlin (2003) and Bernard Tschumi Architects’ Acropolis Museum, Athens (2009).

The new courthouse of the Brisbane Supreme and District Courts is a big, efficient “machine of justice” whose external aesthetic directly reflects the responsibility and challenge of the work conducted within. The courts’ L-shaped plan, with its dominant glass facade edges to Brisbane’s George Street and the new civic square, displays a clear functional hierarchy. At ground level is the main foyer and public offices, the middle portion accommodates the courtrooms, and the upper levels hold the judge’s chambers and library – a subdivision of program declared directly on the elevations. Although the elegant modular double-glazed facades travel over much of the building’s surface, they are given different treatment as the functions behind them change, producing a sophisticated variation. This play of glass skins is visibly richer atop the building and across the levels of the judges’ chambers, where verandahs and sky gardens layer towards the interior. This arrangement also produces some stunning views from inside to outside as the city beyond is revealed in a floor-to-ceiling panorama of space and volume.

In the middle portion of the building on the inner side of the courtrooms are the major public waiting spaces at each level, which open to the north and to verdant views back towards Wickham Terrace. This is where the building reveals its particular attention to the humanization of space. The architects’ aim of creating a calm environment that holds natural light and makes visual links out to the landscape calls up those attributes of architecture that can assist with the concentration required of a working court, and ease the tension that might form around waiting and public hearings. The handmade quality of the concrete soffit creates a luminous surface that distributes natural light deep into the interior, creating generous airy spaces.

For the courtrooms, the architects have gone a step further and brought the court interiors to the exterior of the building, an innovative idea designed to reflect a modern justice system. While the building’s glass skin allows contact with the world outside the court, special screens, blinds and glazing treatments produce a filtered effect, affording a look from inside to out without visual intrusion in reverse. This connection to the environment creates a vital but relaxed atmosphere, a feeling supported by the use of natural materials – off-form concrete and warm plywood panelling. The idea of opening up the building to its natural surroundings came out of critical consideration of typological precedent; an overturning of the conventional model of courts as internalized and often oppressive environments. The decision to open one face of each court to the exterior did have its complexities, however. It meant solving the problem of multiple and discrete access points to each court space without consuming all four sides of the room, which has been achieved through the provision of a separate judicial lift for each pair of courts to obtain a “free” external edge.

The extensive use of glass might have seemed banal for a building housing such an important civic function, but in reality it is anything but. Glass has been highly determined in its use, both functionally and symbolically. Beyond providing luminous and calming interiors, glass has an evident rhetorical purpose: to convey the ideal of transparency in the conduct of judicial matters. This effect and this idea are brought together seamlessly by means of the building’s intricate glass skin, avoiding the kinds of clichéd representations of justice that might otherwise abound. The result is “bold but faithful” (audax at fidelis), to use the words impressed in Queensland’s coat of arms. 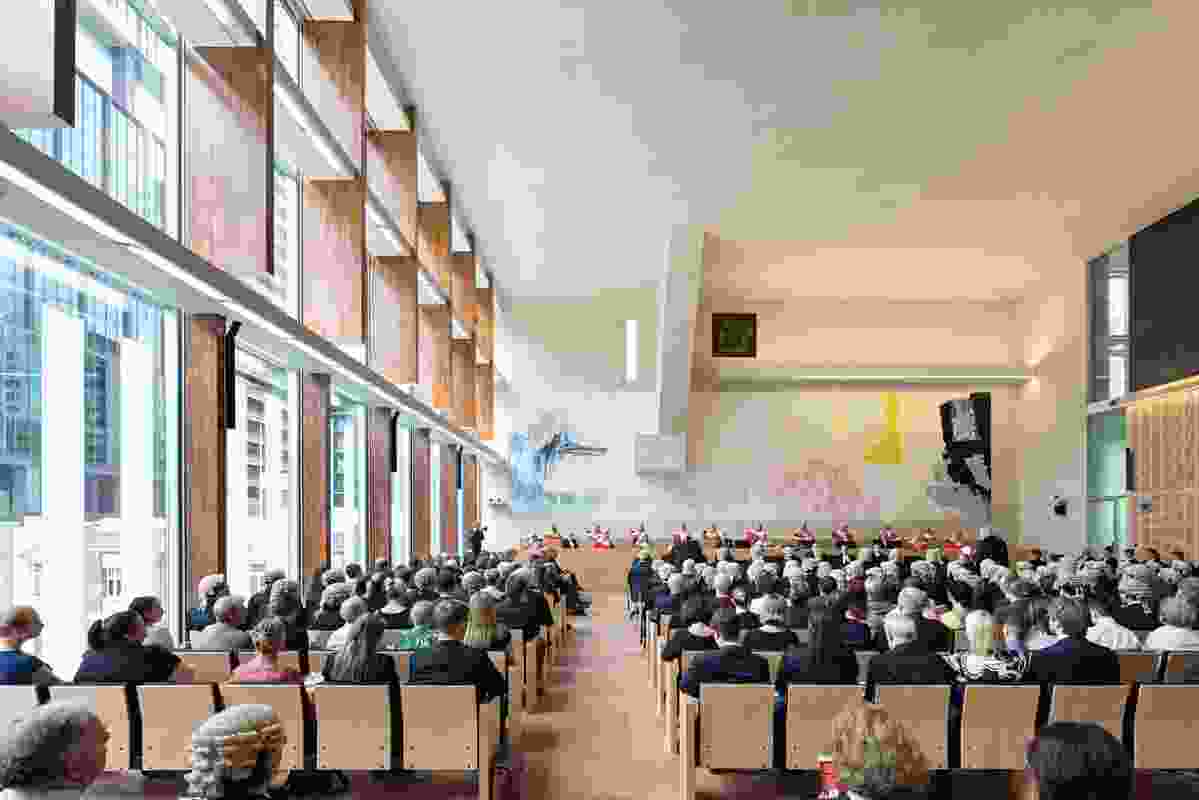 Courtrooms are brought to the edge of the building to show transparency. 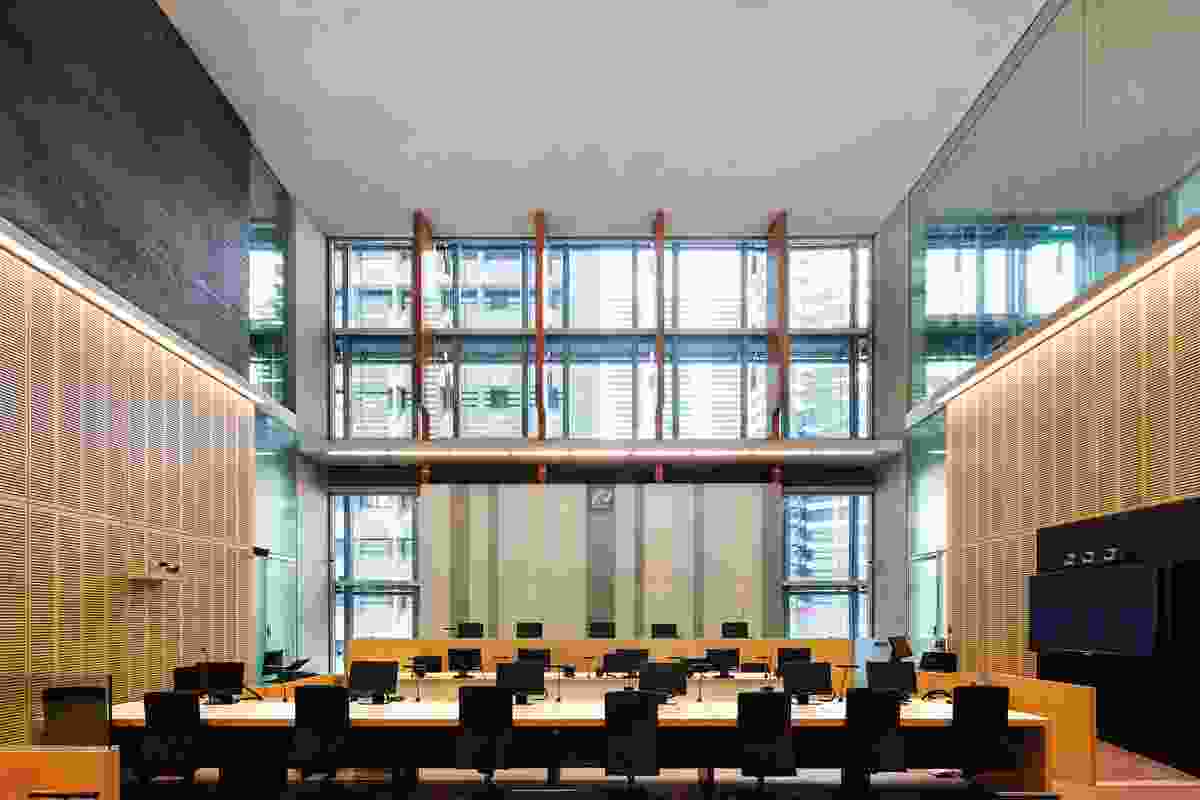 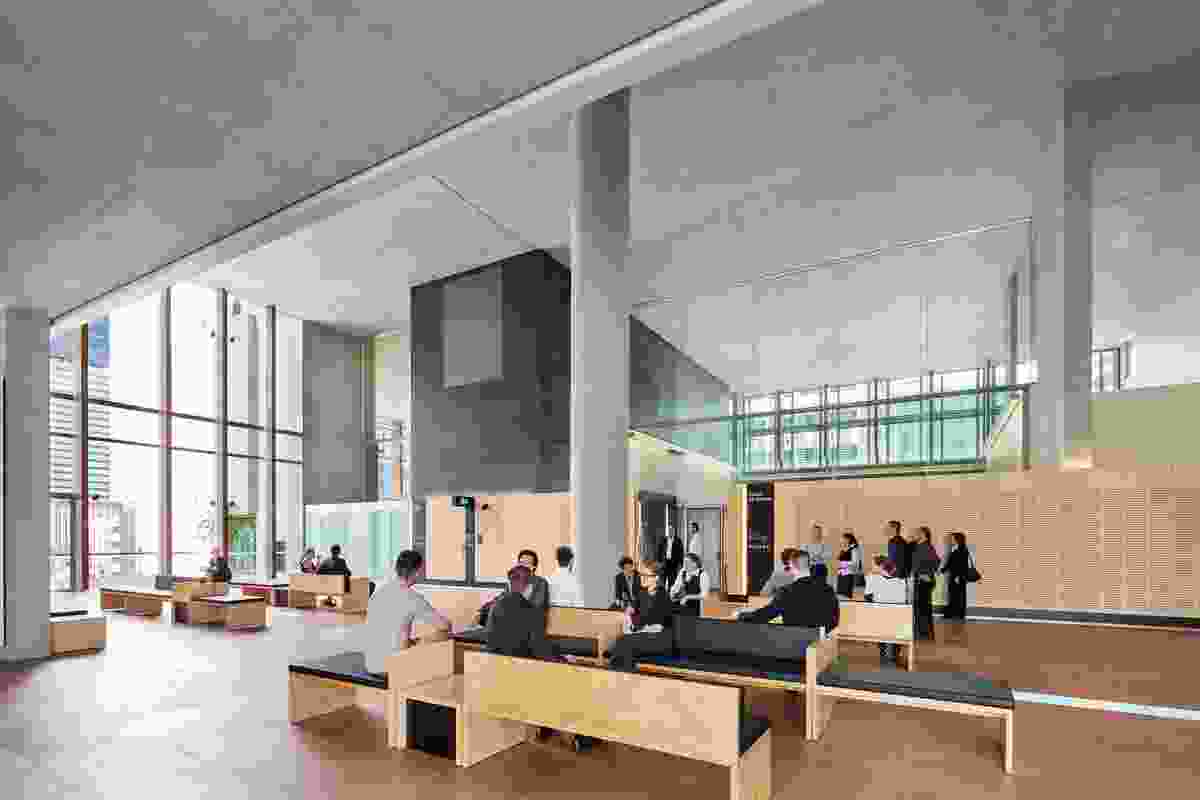 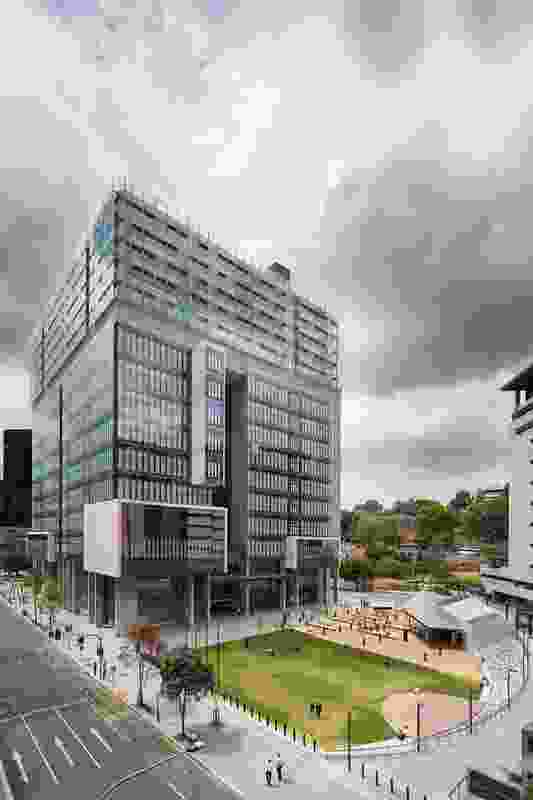 The courthouse sits on the Queensland Place site in Brisbane’s CBD. 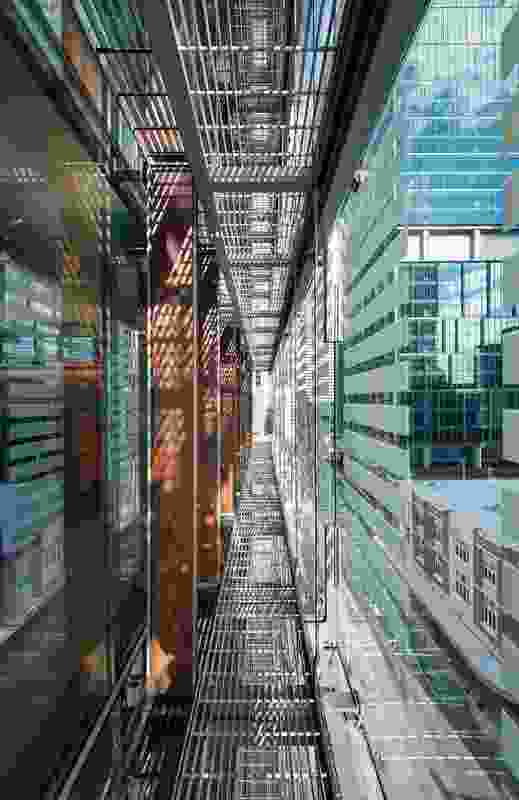 Glass conveys the ideal of transparency in the conduct of judicial matters. 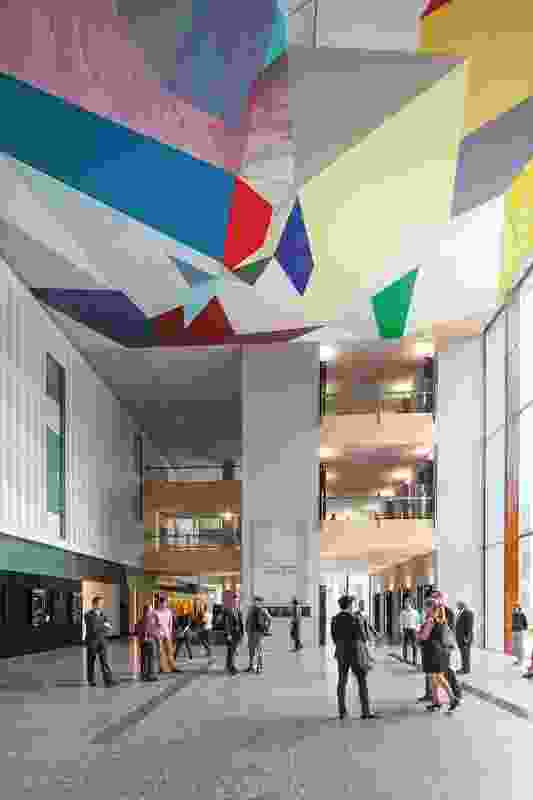 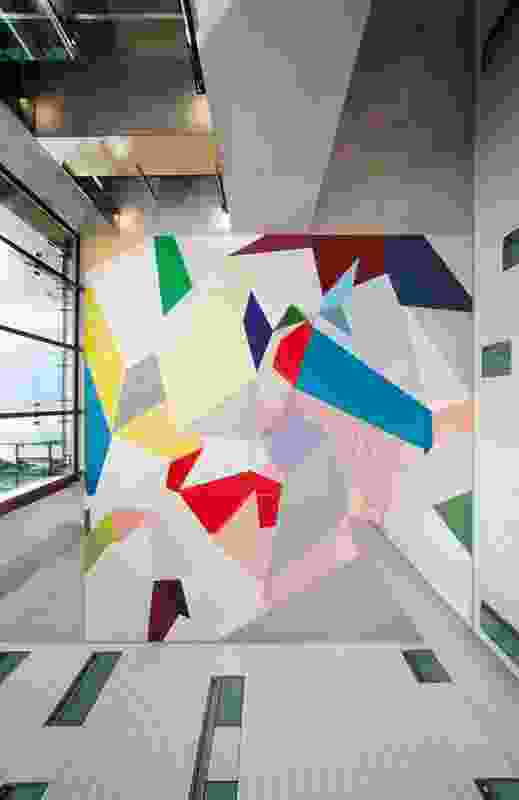 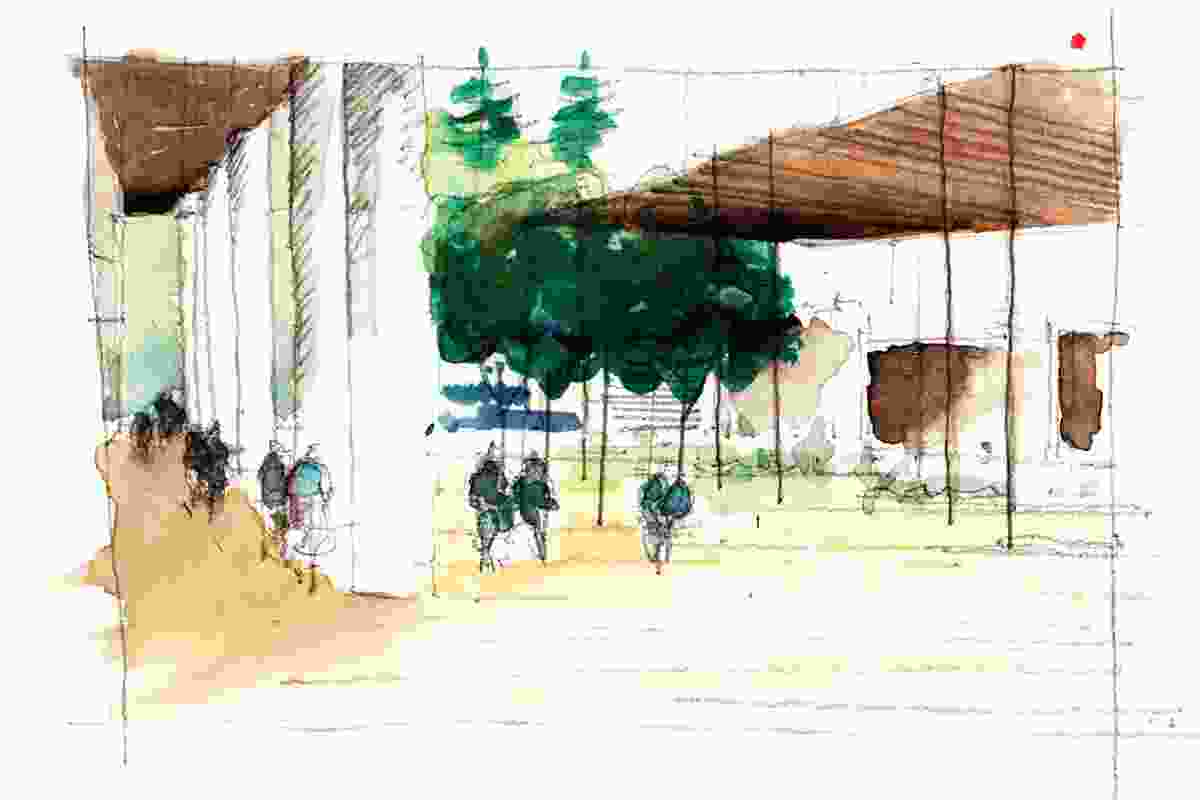 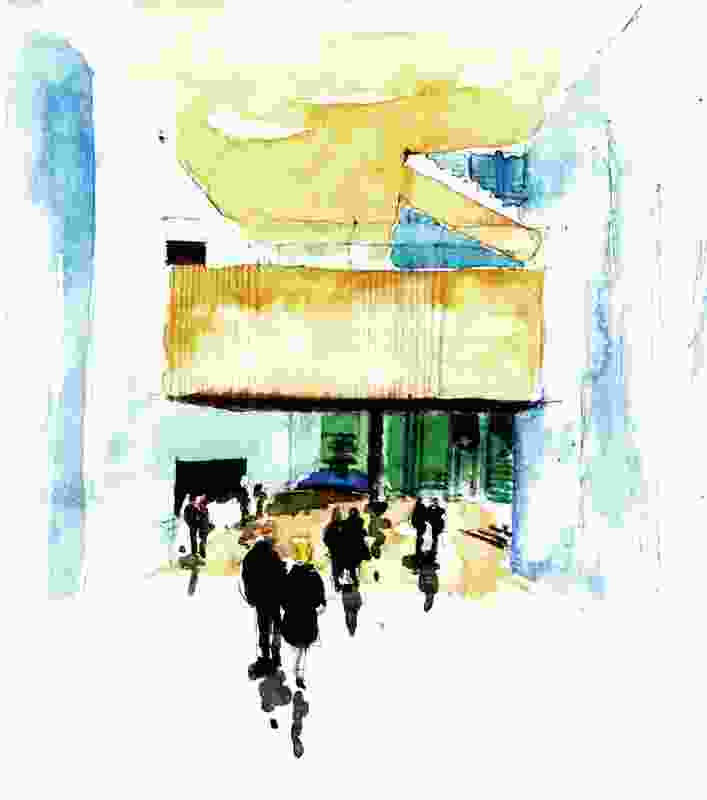 A hand-painted abstract artwork, Collision and Improvisation by Gemma Smith, features on the ceiling of the main entrance.