A bridge-like structure for the expansion of Arthur Boyd’s Riverdale property designed by Kerstin Thompson Architects.

KTA conceived a two-part design that consists of a subterranean space for a 380-square metre gallery and a 140-metre-long bridge-like structure that will house a creative learning centre, a visitor hub and a 32-room accommodation facility.

The Riversdale site is heavily constrained by the threat of fire and flood and the location of existing buildings, which include the historic homestead complex and the Boyd Education Centre (BEC) designed by Glenn Murcutt, Wendy Lewin and Reg Lark in 1999.

The design of the linear building, which straddles between two hills in a north–south alignment, is inspired by the trestle bridges found throughout rural Australia.

“It’s a very dynamic environment down there with the threat of flood and fire. That’s where elements like trestle bridges came to mind. They’re a big part of flood infrastructure in Australian landscapes,” said Kerstin Thompson.

“It’s also quite a large new element and we thought we really had to do something more on the scale of infrastructure to resolve the scale of that new building. “In its length, it can actually provide a very beautiful and dramatic datum that really highlights the undulating ground below.”

The bridge will be a “skeletal” structure made from a hybrid of steel and timber. It will act like a “giant verandah space and walkway from one ridge to another – a sheltering canopy,” which will envelop the various spaces arranged within it from the more private accommodation rooms at the northern end to more public facilities at the southern end.

“It’s envisaged as quite a robust and direct building,” Thompson said. “It’s quite hardy and not precious and stays open to lots of different uses along its length.”

The bridge will be a permeable structure and will have views towards the forest to the west and Arthur’s Hill, with glimpses of the Shoalhaven River, to the east .

The second element of the design will be a subterranean building which will be buried under a reinstated hill that was flattened for the existing car park. This will allow the gallery to be climate-controlled for the purpose of preserving the paintings. Light chimneys through the roof of the building will bring natural light into the space as well as offering tightly framed views to the surrounding bush, a gestured designed to pair Arthur Boyd’s paintings of the landscape with glimpses of what inspired them.

“One of the things we find intriguing is a lot of Boyd’s paintings are divided into sky, land and water or river. In the gallery, for instance, we thought that the experience of seeing the silhouette of the edge of forest, where it meets the sky is quite important.”

The gallery will house a permanent collection of more than 3,800 works, including more than 1,300 works by Arthur Boyd as well as works by Sidney Nolan, Charles Blackman, Brett Whiteley and John Perceval. The collection also includes contemporary works from the Bundanon Trust’s artist in residence program. The gallery will also be host to temporary and travelling exhibitions.

A common forecourt will be created between the new buildings and the existing buildings and will act as a central point for the Riversdale site. Stepped terraces will lead down to the gully and will allow visitor to access the underside of the bridge.

KTA has designed the building elements collaboratively with New Zealand landscape architecture firm Wraight and Associates, local landscape architect Craig Burton of CAB Consulting and sustainability specialists Atelier Ten. The team formed the view that “when we talk about landscape, we can’t just talk about it in a picturesque sense. It’s not just what it looks like, although that’s extremely important, but also how it operates as an ecological system” Thompson said.

“The pastoral clearings and the contrast that they create against the native bush is spectacular and a huge part of what’s really compelling about Riverdale as a place.

“Observations like that meant directed us to use things like roads to reinforce that fantastic edge between the clearing and the forest.

“From the beginning we always felt that a good building should give you some insight into the place that you’re inhabiting. We thought there was a chance for the new buildings to add to the range of experiences that were already on the site. One of the ways we could do that is to provide quite different spatial qualities to what’s already there.” 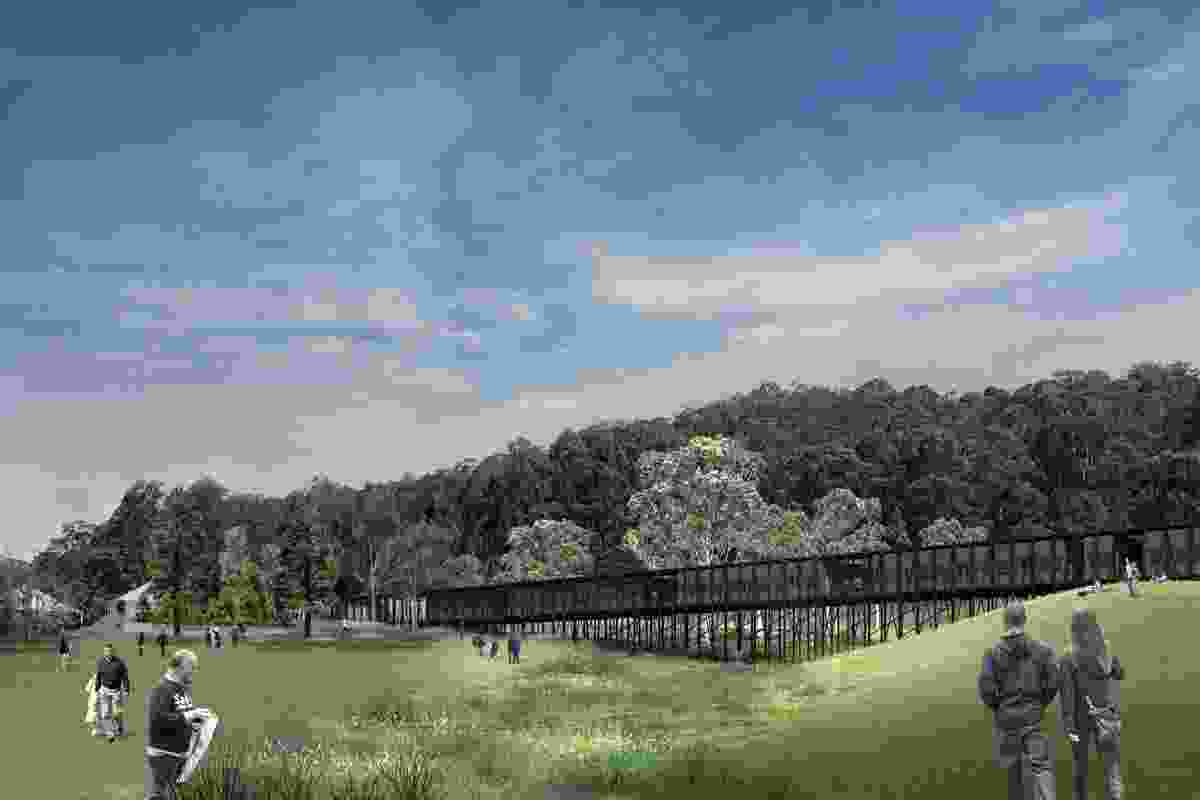 A bridge-like structure for the expansion of Arthur Boyd’s Riverdale property designed by Kerstin Thompson Architects. 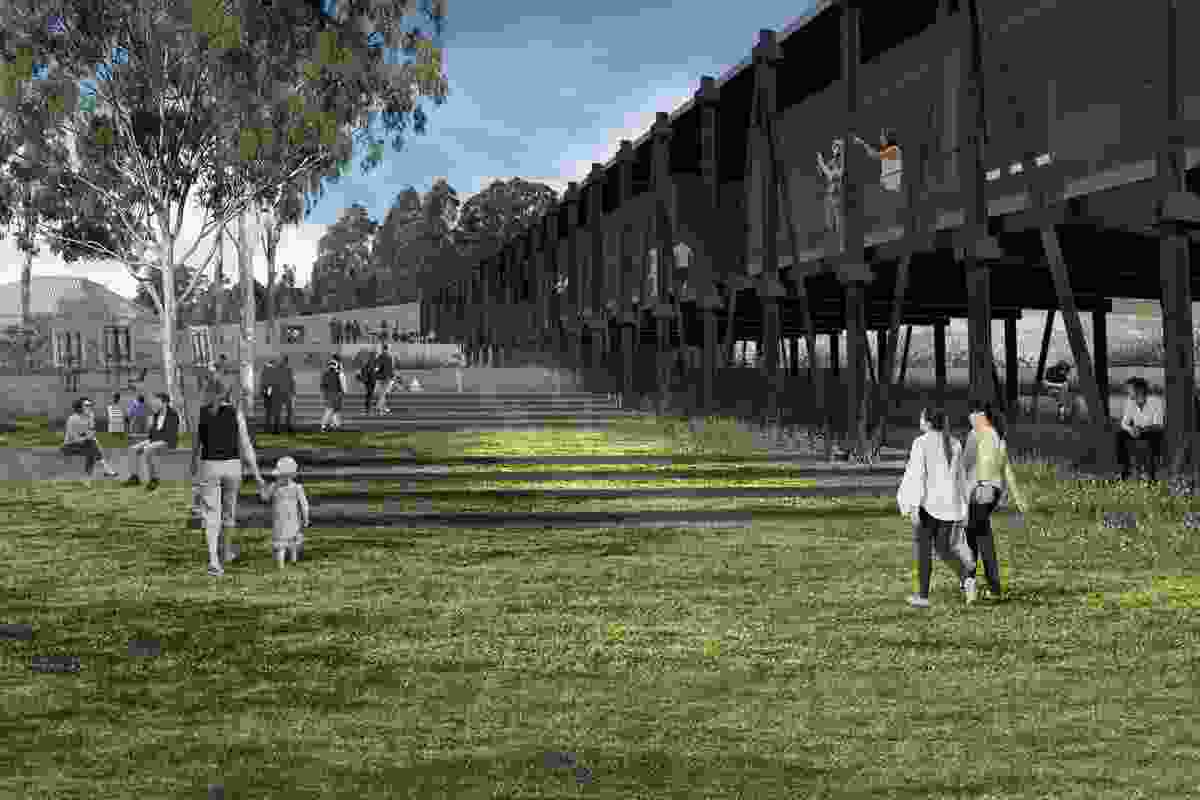 Stepped terraces will lead down to the gully and allow visitors to access the underside of the bridge. 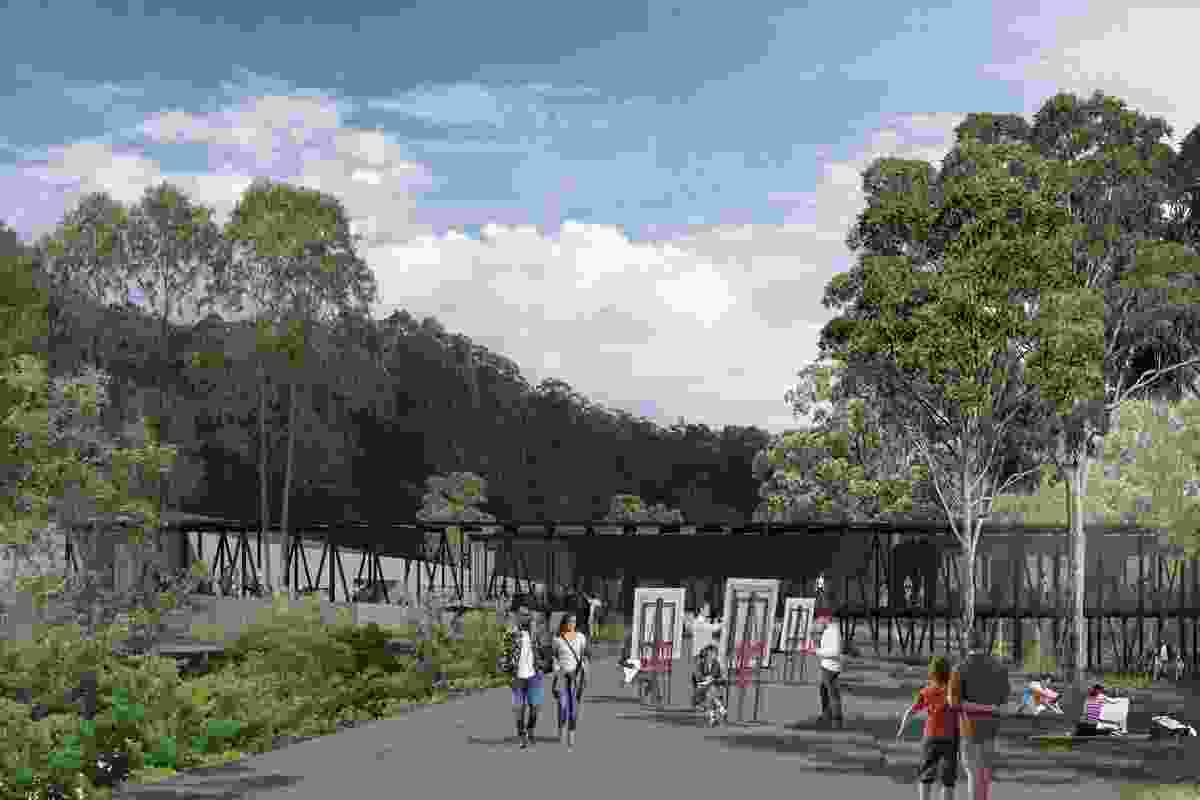 A common forecourt will unite the existing and new buildings on the site. 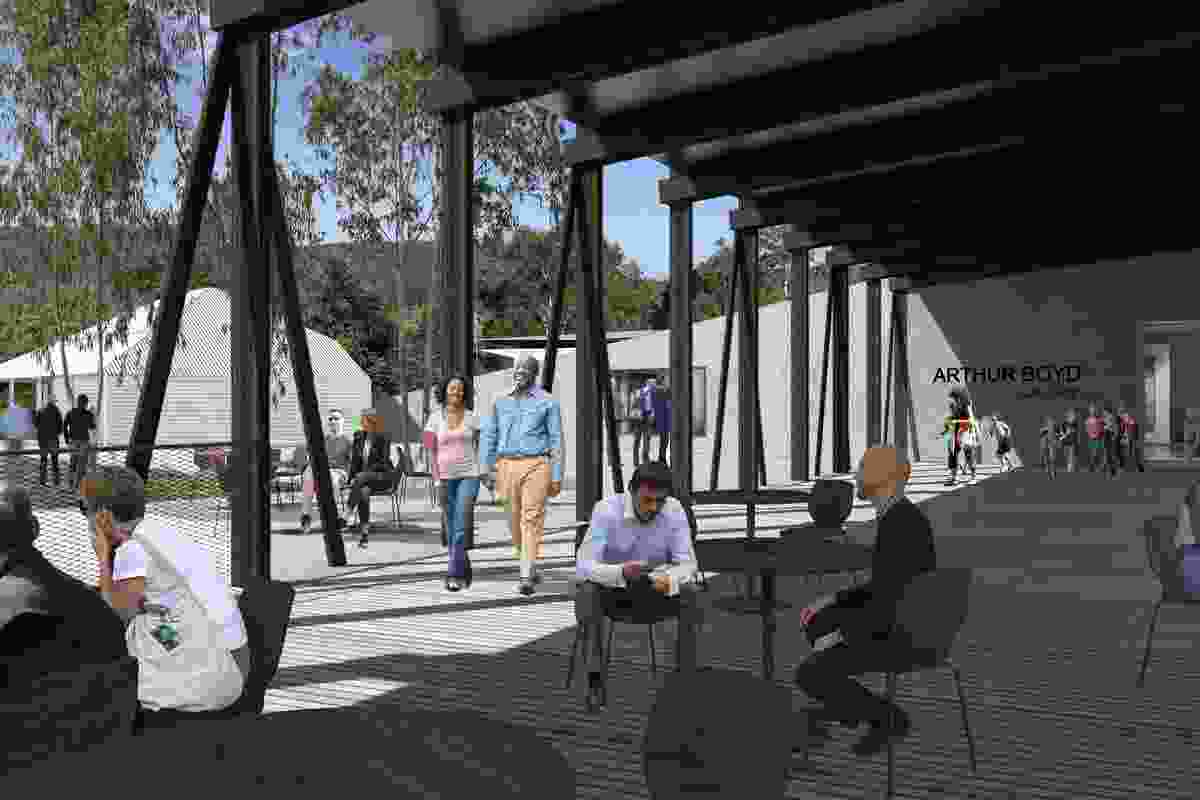 The bridge structure will be made from a hybrid of timber and steel. 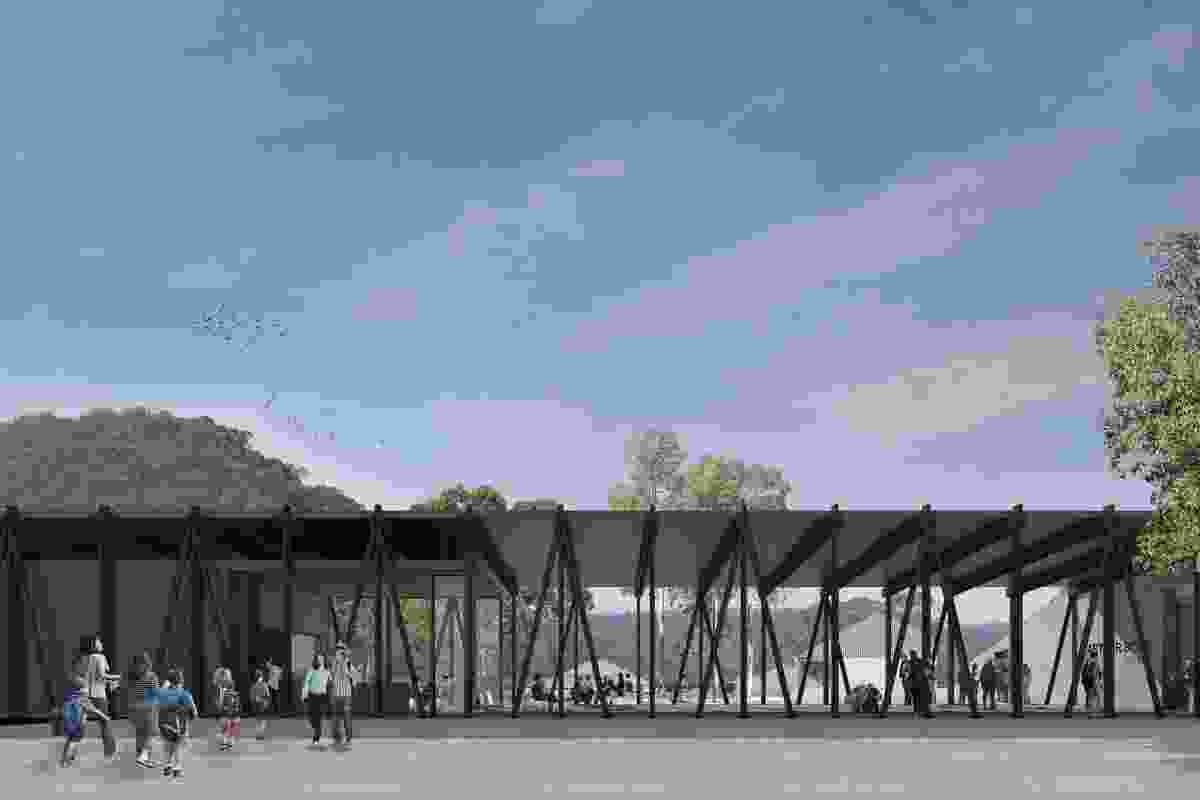 The arrival hall of the Riversdale expansion project designed by Kerstin Thompson Architects. 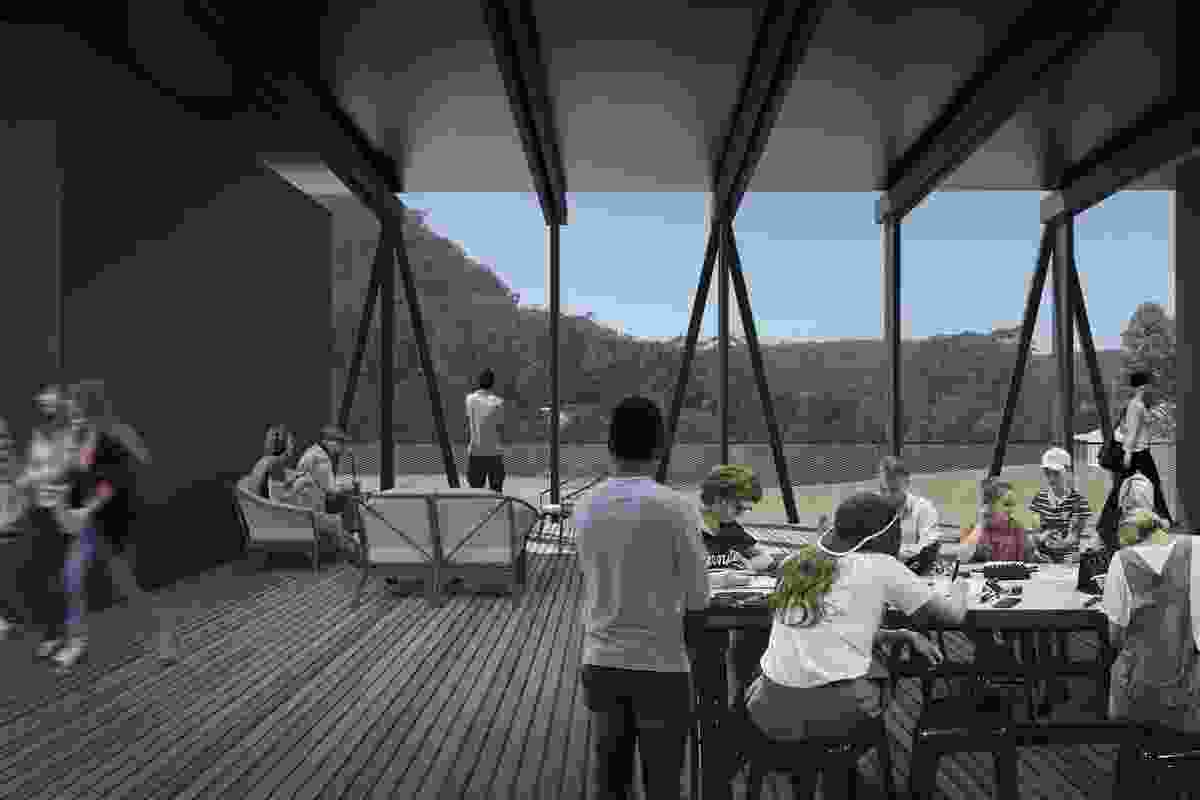 The bridge structure will essentially be a large covered verandah allowing views to the forest and Arthur’s Hill. 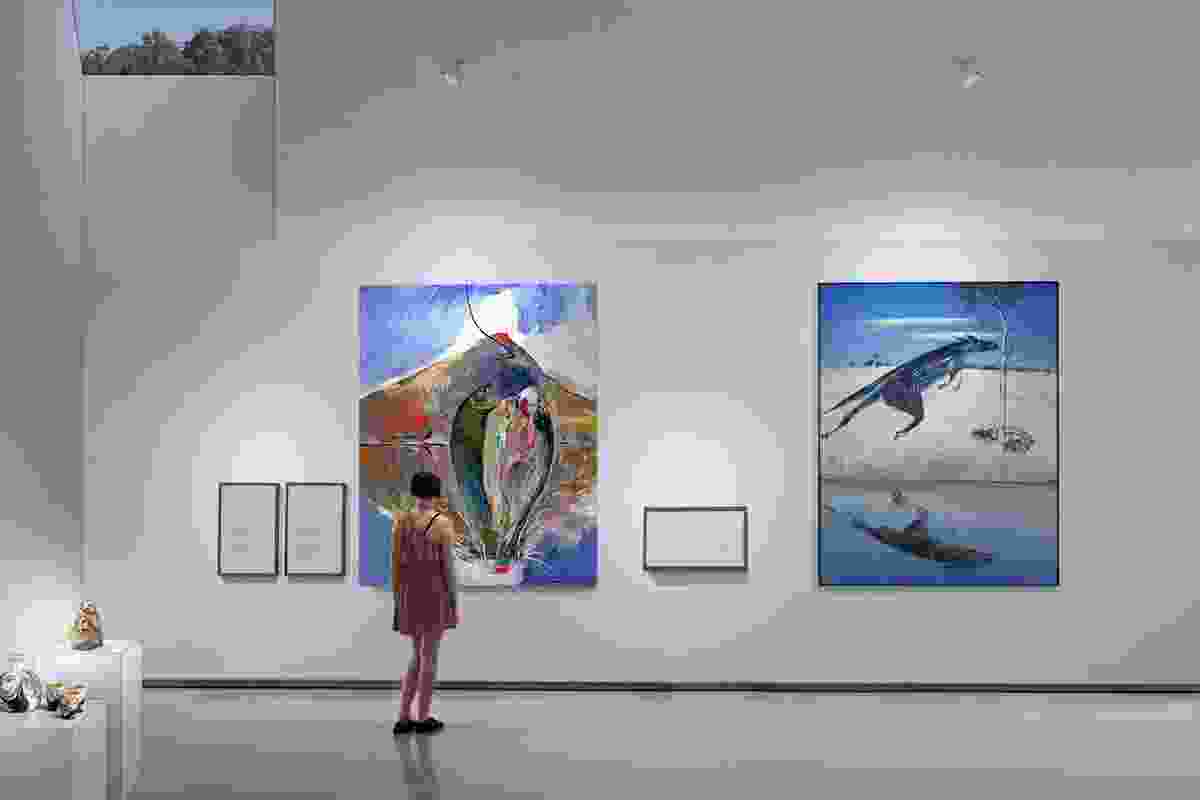 Inside the subterranean gallery space of the Riversdale expansion project by Kerstin Thompson Architects. 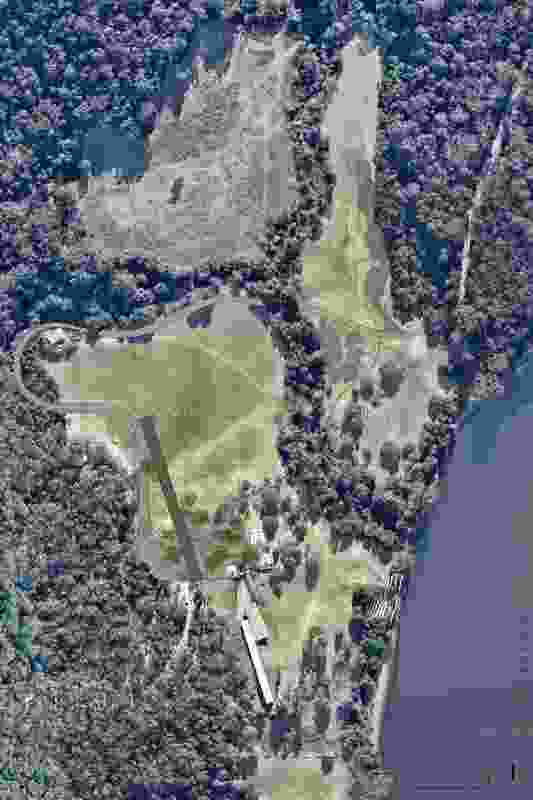 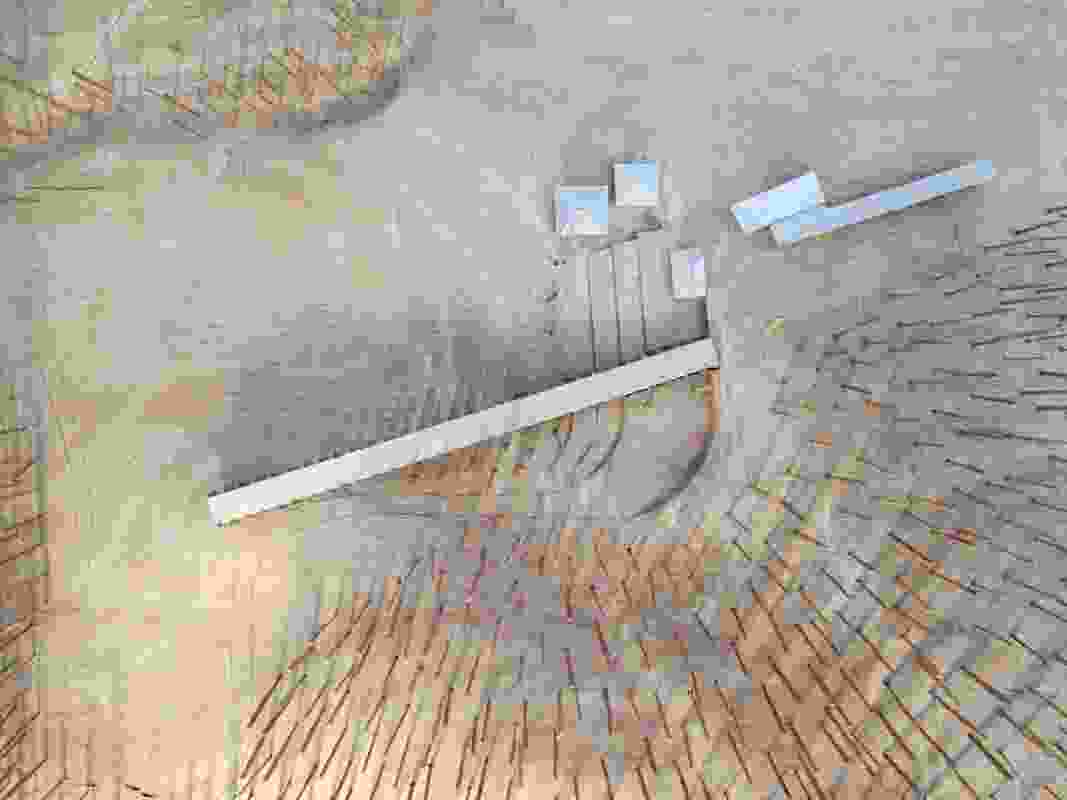 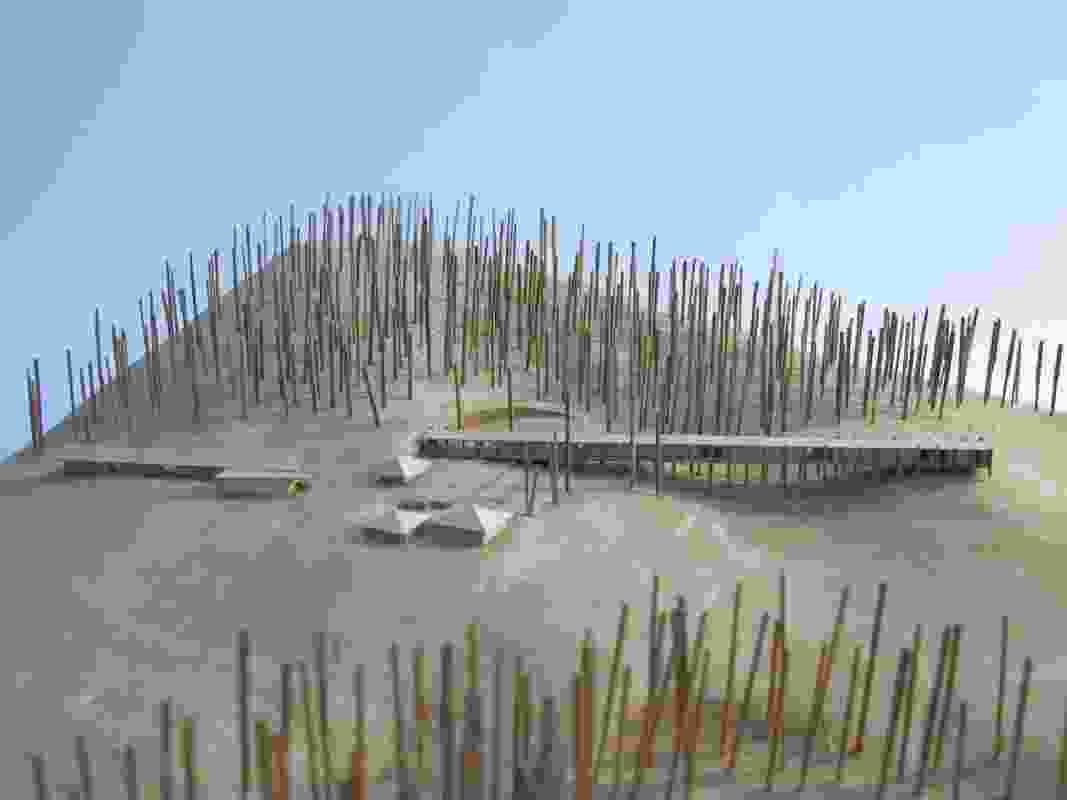 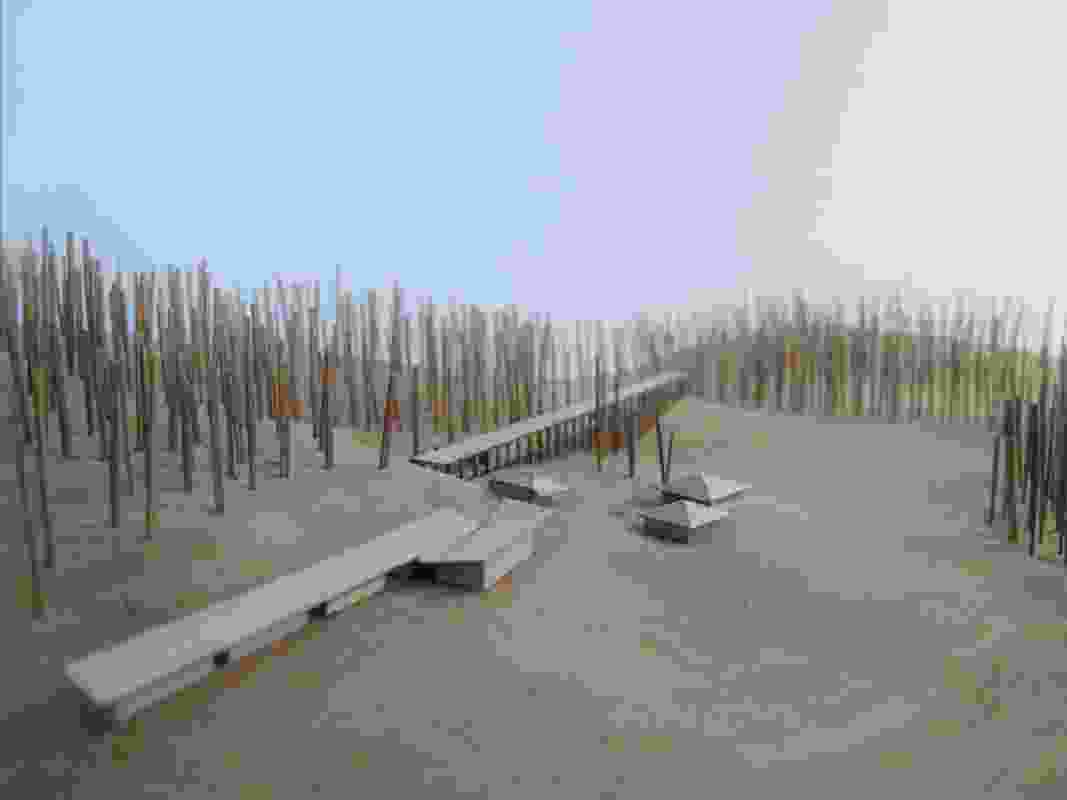