Sunken gardens inhabit hollow columns on the top floor of the podium extension by Lacoste + Stevenson.

A kind of perfect storm is brewing in the southern tip of Sydney’s CBD with an intense concentration of architectural talent engaged in work on either side of Broadway. On the south, and outside the scope of this article, the Frasers Broadway development is underway on the site of the old Carlton and United Brewery. The Frasers site boasts a residential tower by Jean Nouvel, Foster and Partners, JPW and others. Across the road, UTS is embarking on a major building works program, with projects by Denton Corker Marshall, Lacoste + Stevenson with Daryl Jackson Robin Dyke, DRAW and none other than the Bilbao Effect himself, Frank Gehry. It is safe to say that the area is to undergo a significant overhaul in the coming years.

Of Sydney’s three metropolitan university campuses, UTS stands out due to its tight integration into the city. At the point of Broadway where Parramatta Road meets George Street, it metamorphosed out of a series of technical colleges, ultimately becoming the University of Technology, Sydney in 1988. Its campus grew by accumulation over the years, acquiring sites in the surrounding areas to the point that it is now something of an octopus of a campus, tendrils stretched deeply into the city surrounding it. At its centre is the UTS Tower, loved by few, but nonetheless a striking and remarkably stubborn landmark.

Following in the footsteps of the University of New South Wales, which successfully transformed its campus in the late 90s; and the University of Sydney, whose Campus 2010 masterplan sought to transform its campus through two major building projects and a strong landscape plan (perhaps misguidedly, courtyards being the typology of USYD, not UNSW-style axial malls); UTS in 2008 adopted its 2020 Masterplan for its primary campus. The new masterplan by BVN attempts to knit the campus together by defining a new Alumni Green at the centre of the campus and identifying key building opportunities around this public space as well as along Broadway.

UTS has begun procuring the primary components of the plan, through open two-stage competitions in the case of the Broadway buildings, invited tenders and, with Frank Gehry, direct engagement. The university ought to be commended for the two open competitions it has held, for the intention if not the execution (an unclear two-stream system whereby entrants could enter a design or a statement of capability or both). These are key sites at the entry to the city and the competitions opened an intense debate around procurement and generated a great deal of exploratative design work by local and international architects.

So what of the projects themselves? As of now, there are four major projects underway, at various stages of planning. They are: the Faculty of IT and Engineering by Denton Corker Marshall, the UTS Tower and Podium Extension by Lacoste + Stevenson and DJRD, the refurbishment of the Great Hall and new foyer by DRAW, and the Dr Chau Chak Wing Building, a business school, by Gehry Partners.

The most recent of the commissions awarded and the first to get underway in a meaningful way is the refurbishment of the university’s Great Hall by DRAW (in collaboration with Kann Finch Group). Located within the podium of the tower building, the Great Hall is the University’s primary ceremonial space, all timber lining and precast concrete structure, the ceiling coffers of which each weigh four tonnes. DRAW’s project involves wrapping the interior of the hall in a folded and perforated metal skin, forming a rich interior space that alludes to the warmth of the original timber and the precision of a university of technology. The images show an intense space of dense patterning and what the architects call a “mass customization” of hundreds of unique panels, and while the development of the geometry is a work in progress at this time, talk of a rationalization of the parts promises a closer alliance with the aims of its brutalist parent structure.

In addition to the hall, DRAW identified an adjacent disused balcony (a clever value add to the competition brief by the architects), which will be glazed in and will form a new entrance foyer overlooking the Alumni Green.

Elsewhere on the podium, the UTS Tower and Podium Extension along Broadway by Lacoste + Stevenson is perhaps the most significant of all the UTS projects. It comprises the new formal entrance to the university and deals with the spectre of the UTS Tower head-on. UTS is acutely aware that the tower building regularly features on lists of Sydney’s most maligned buildings (fret not, it is in good company with that other perennial outcast, Blues Point Tower) and while any substantive modifications are structurally near-impossible, modifying the podium gives the university an opportunity to refocus the public’s perception at its front door.

L+S’s strategy is straightforward. They rightly identify the existing foyer space as one of UTS’s best (a vast space of interlocking bush-hammered volumes) and leave it largely untouched, concentrating their efforts on the perimeter of the block, which they wrap in a voluptuous glazed skin. At the entries, the glazing sweeps in, dragging the Alumni Green and Broadway into the foyer of the university.

There are other elements, like the Toyo-Ito-in-Sendai-inspired hollow columns that support structure and connect spaces, and the extension of the podium’s floor plates as shapely white. At this stage, the project has not moved beyond the competition phase. L+S has been announced as the winner of a competition; however, the university has not yet committed to taking the project further.

While the Broadway buildings will deliver the university a new face, Gehry Partners has been engaged to design the Dr Chau Chak Wing Building, a school of business on the former Dairy Farmers site, in the backblocks of the university behind Chinatown and the ABC headquarters. At the time of writing (yes, again sorry), UTS has not released any external images of the building, but fourth-hand reports say that it is blocky, or that it looks like someone sat on it. Which admittedly is not giving away a great deal. However, lest we be concerned, I am told by the university communications manager that I can rest assured, that it “will be Frank Gehry building”.

Revealingly, a poster in the tower’s foyer has a photo of a model of the interior of the building, naked, waiting for Gehry’s Santa Monica seamstresses to drape it in a post-Issey Miyake crumple frock. The interior has not been embargoed and it is clear then that the big unveiling of the building in mid December has little to do with how the building operates as a business school, and everything to do with its outer appearance and what this represents to the university. It is a business school second, a billboard first.

Expect to see images of the building on all of UTS’s marketing material for years to come. Can Sydney University boast such a drawcard? UNSW? A few good buildings by local talent are nothing compared to the might of a Gehry juggernaut. Seriously, this is going to be the face of UTS. Not the tower anymore, but the little building in the backblocks. The effect of which will be, contrary to the efforts taking place on Broadway, to refocus the university, not on Alumni Green but on the city.

In the meantime, while we are waiting for these projects to coalesce, knitting the projects together is an extensive program of temporary building hoardings. There are five sites, with four teams. DRAW is the head consultant and designer of the hoardings for the two Broadway sites, while also managing the three other hoardings: Zana Wright’s Periscope at the Dr Chau Chak Wing Building, Stacey Lewis’s Book Wall for the new UTS Library Automated Storage and Retrieval System (by Hassell) and Concrete Jungle’s Concrete Jungle at the UPN UTS Student Housing Site. The hoardings - small, temporary, inexpensive - are exactly the type of project that is easily discarded and the fact that the project even exists shows the university’s commitment to the design-led transformation of its campus.

It is heartening that UTS has extended its reach relatively wide for these commissions, engaging with emerging and smaller local practices, students (in the case of the hoardings), established interstate architects and one very global megastar. It is an ambitious building program and, with the Alumni Green well underway, it will be good to see the Tower Podium Extension, Great Hall and Business School underway in the near future - projects that, alongside the Frasers development over the road, will deliver a significant readjustment to the southern entry to Sydney’s CBD. 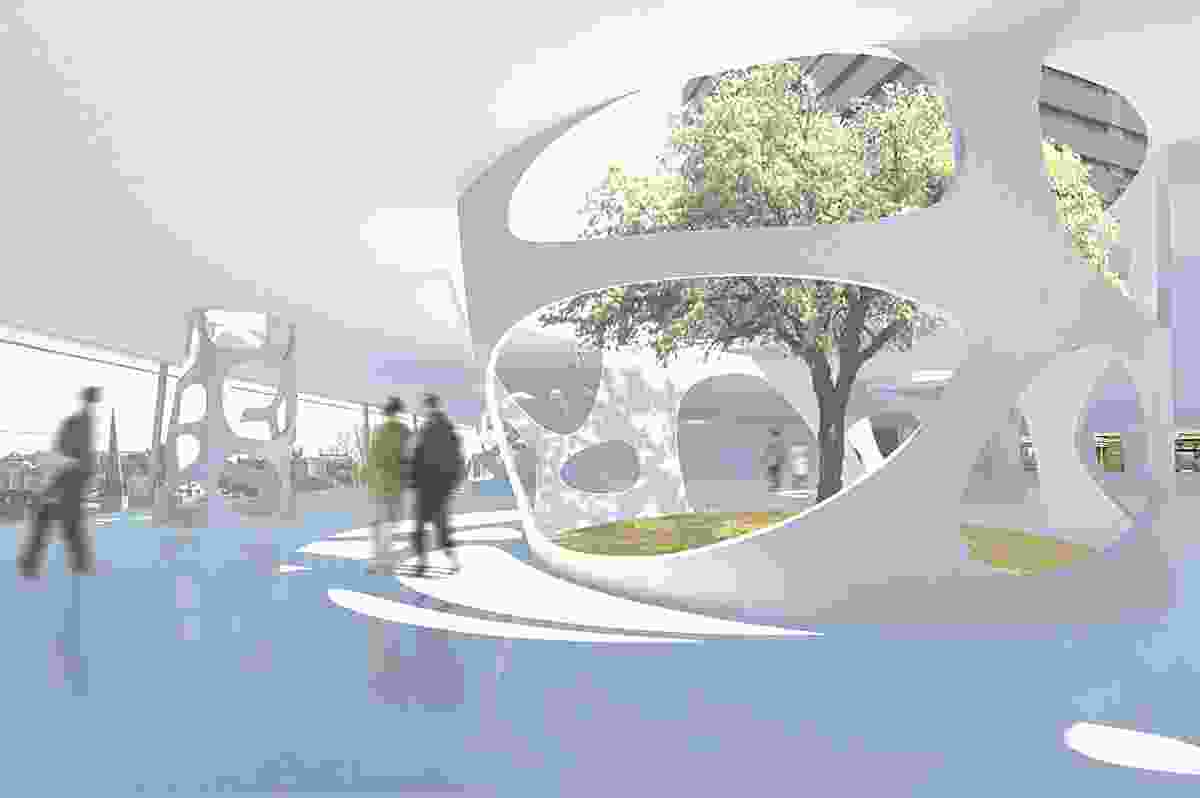 Sunken gardens inhabit hollow columns on the top floor of the podium extension by Lacoste + Stevenson. 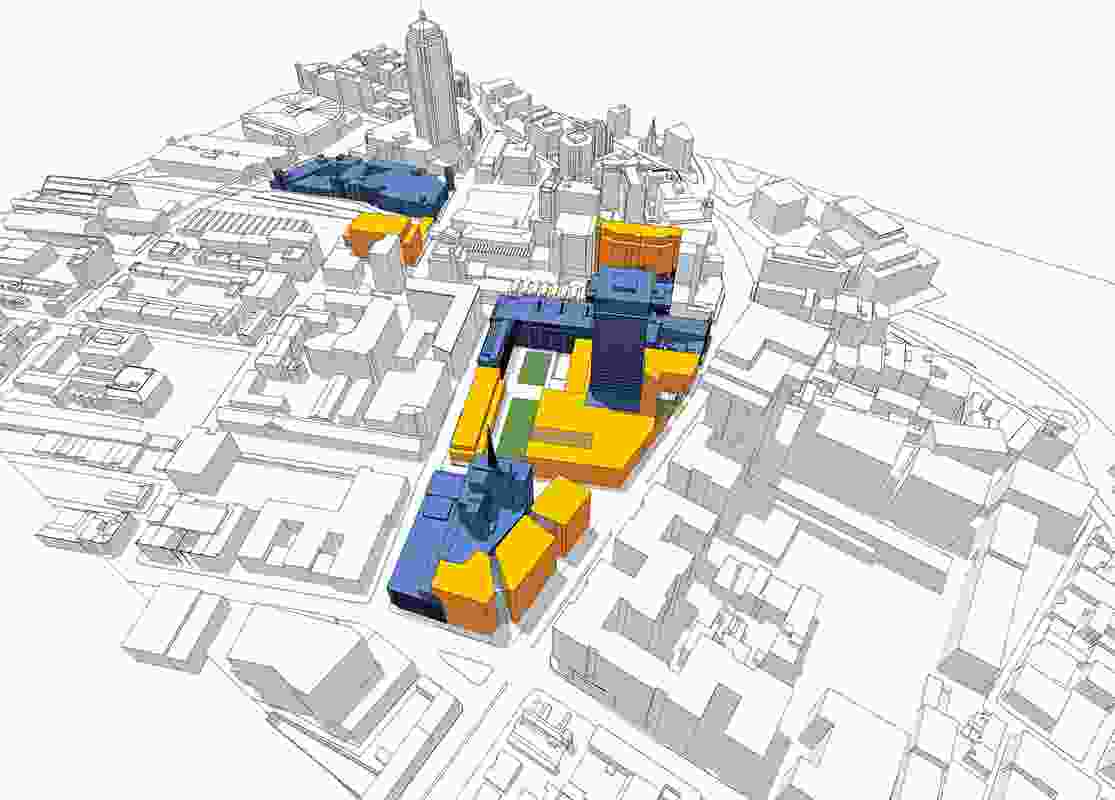 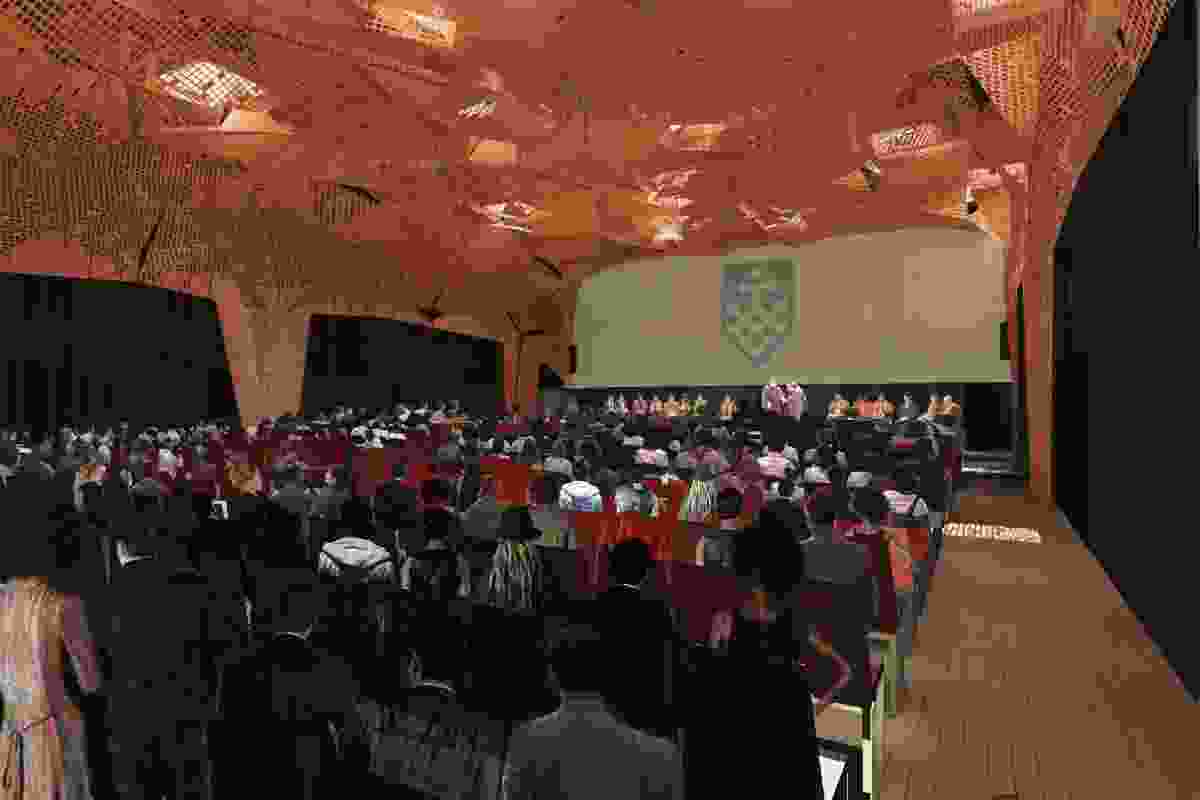 DRAW’s refurbishment of the Great Hall sees the interior wrapped in a perforated metal skin. 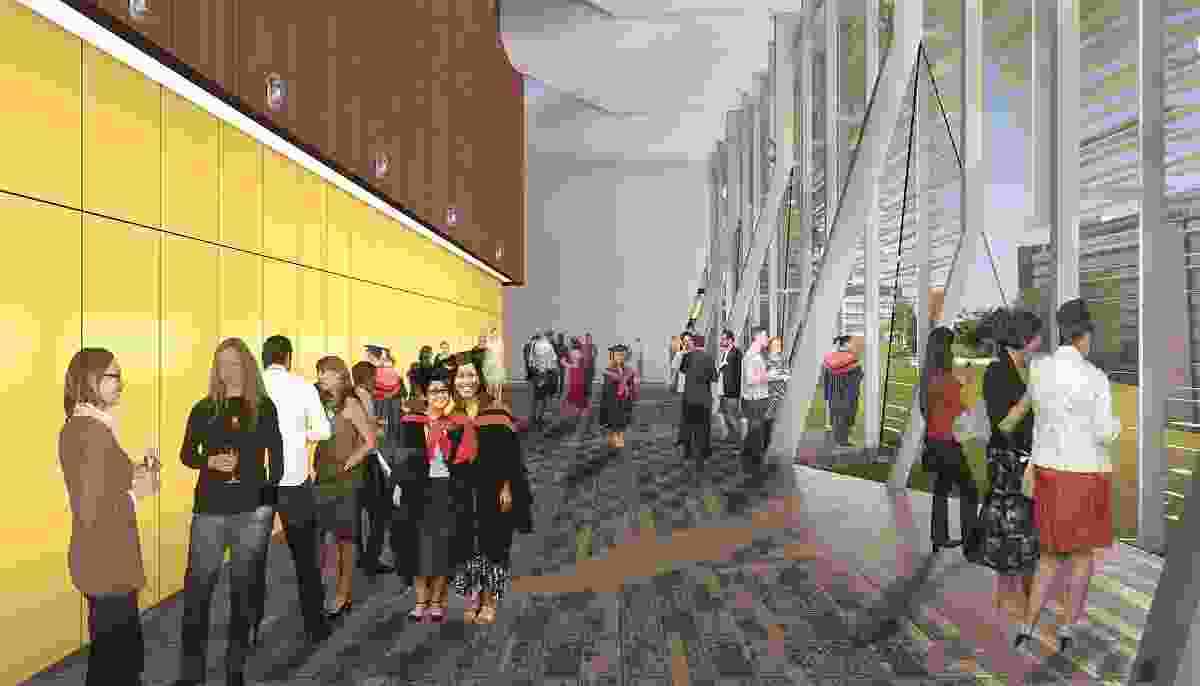 As an addition to the brief, DRAW will enclose an existing balcony in glass, transforming it into a new foyer. 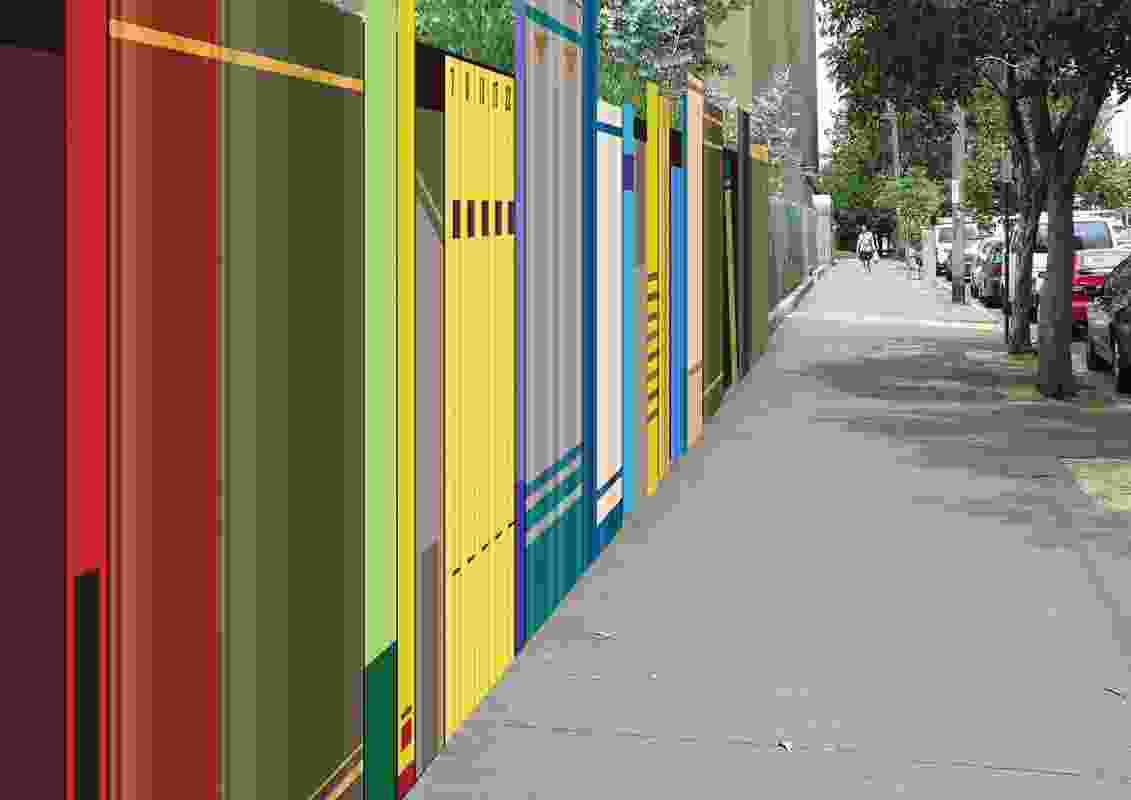 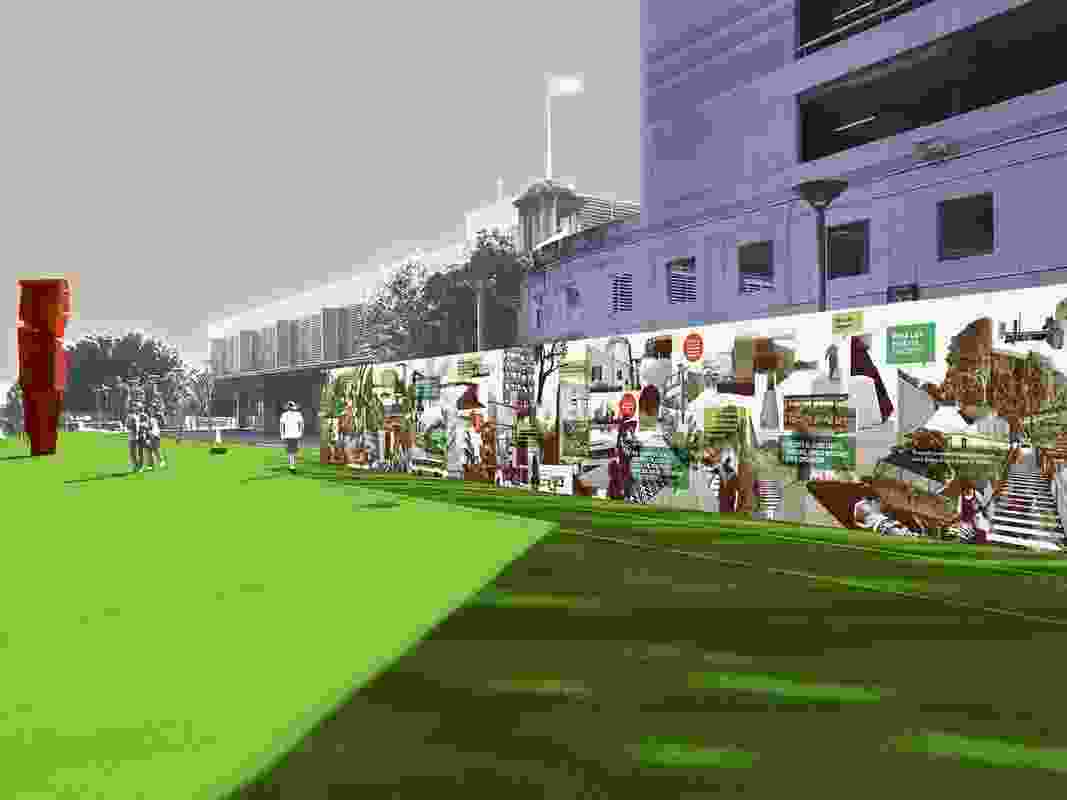 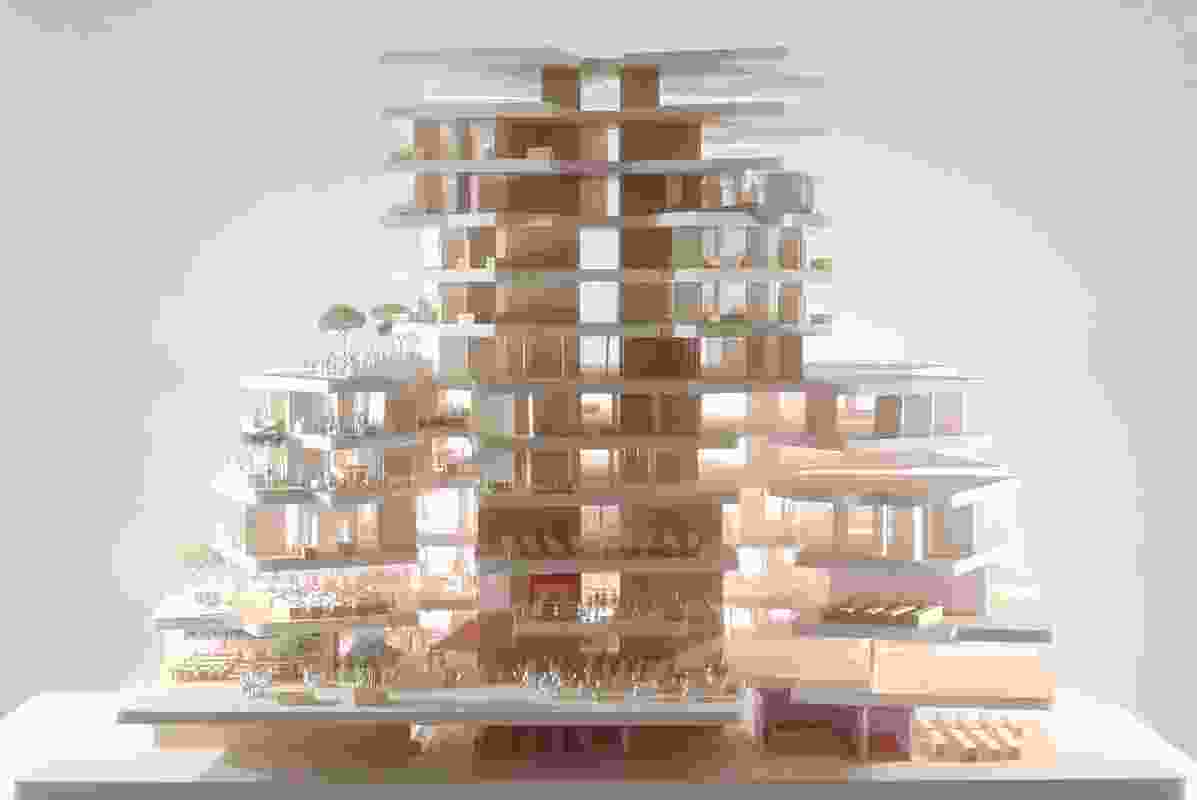 An early model of the Dr Chau Chak Wing Building by Gehry Partners. An updated design was made public in December last year. 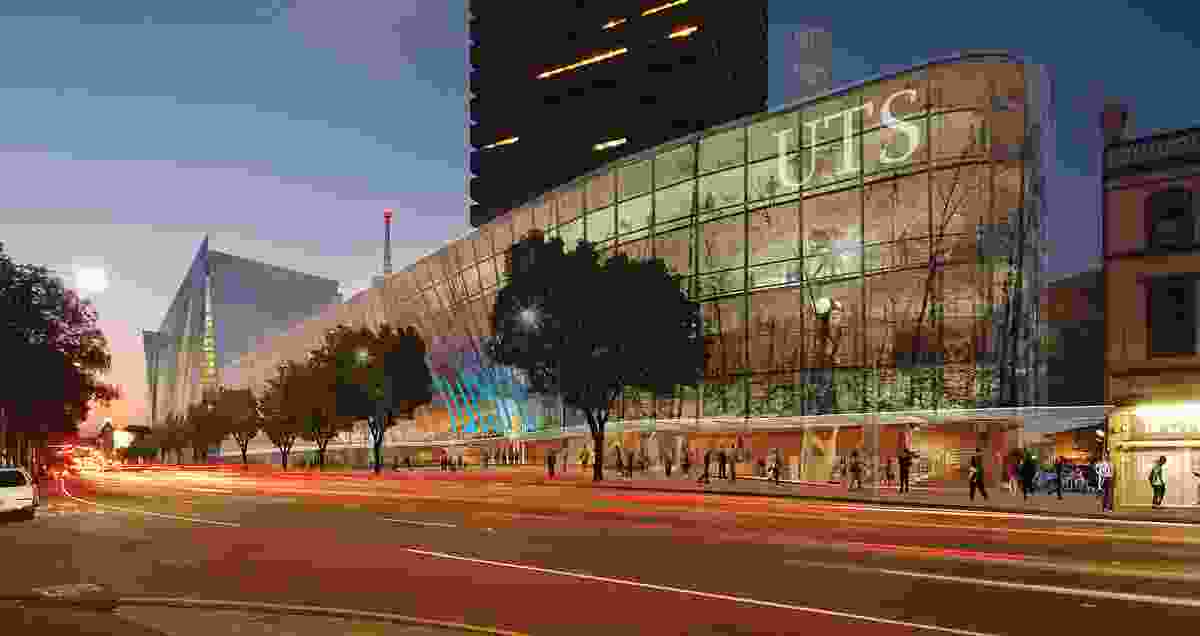 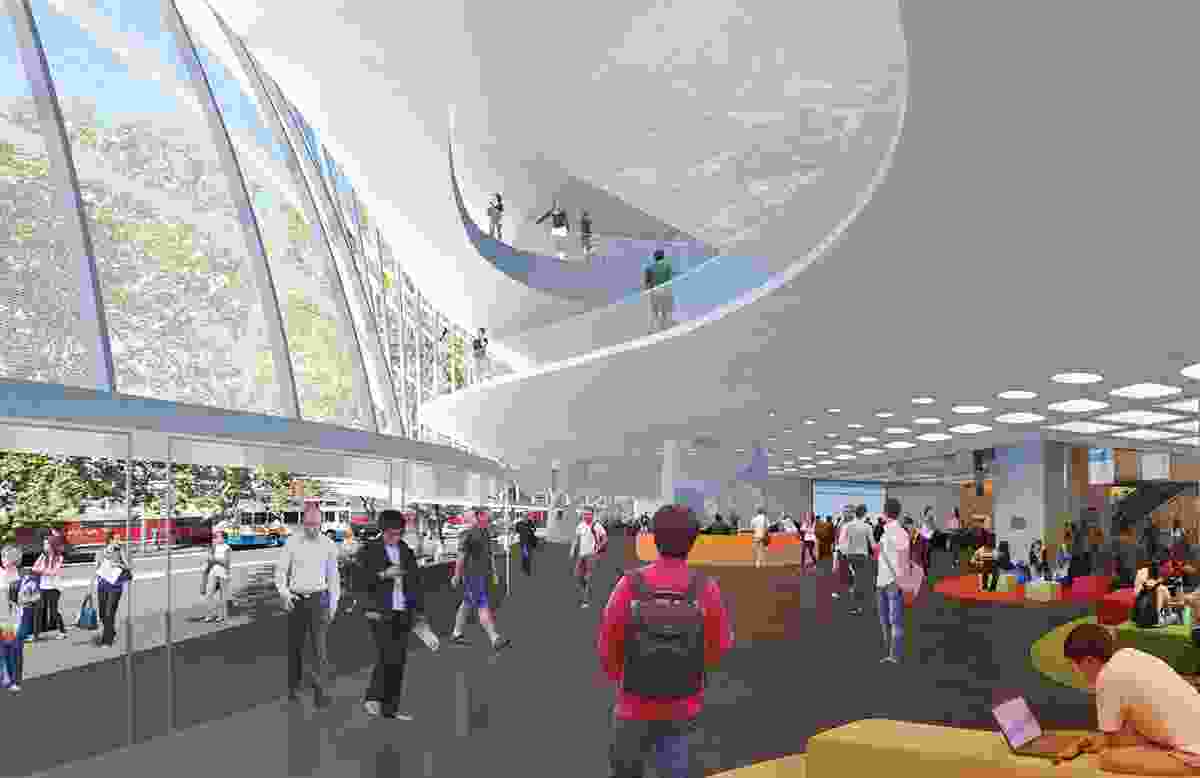 The glazed facade connects the podium’s entrance to Broadway.