A series of diverse, textural and dynamic “garden rooms” are the result of a close collaboration between architect Myers Ellyett and landscape architect Dan Young and celebrate a life lived outdoors.

The entry courtyard is a mix of shades of grey and green that highlights various foliage textures, with a ground layer of travertine pavers over sandstone river pebbles.

In subtropical Brisbane, the average top temperature in the two coldest months of the year – June and July – is a balmy twenty degrees Celsius. So if you’re embarking on a renovation, it makes perfect sense to integrate your interior and exterior spaces as tightly as possible, particularly if you have a large family and space is in demand.

This is exactly the thinking that underpins the landscape design at Bungalow Garden Rooms by Myers Ellyett and Dan Young Landscape Architect, in the inner suburb of Paddington. The design deftly negotiates an architecturally significant 1960s cream brick house to provide a series of engaging “garden rooms” that augment the family’s everyday living space. Set atop a rise, the house and garden enjoy magnificent views in almost every direction.

“The clients have four boys, and one of the key components was to give them a pool so that at the end of the day they could all jump in there, wear themselves out, have a shower outdoors, then go and get ready for bed,” explains Jade Myers, co-director of Myers Ellyett.

While the architects were initially engaged to design a deck around a pool, the project’s scope quickly grew to include an outdoor shower area, two new pergola structures – one above the entry courtyard and the other above the deck and lounge beside the pool – and an incredibly detailed planting response that stitches together the various elements into a coherent whole.

The property is essentially a walled compound: a masonry wall about two metres high runs the length of the street frontage and the top of a steep slope on the northern boundary. While the wall affords privacy from the street, a lot of the garden area still suffered overlooking issues from a three-storey block of flats across the road. Responding to this concern, the architects designed a simple but effective black timber arbour above the entry courtyard. Deep timber slats, placed about half a metre apart, run perpendicular to the neighbouring building – they let in plenty of light, yet block diagonal views into the courtyard and house.

Landscape architect Dan Young explains that the planting in the entry courtyard contrasts shades of grey and green and highlights various foliage textures. In the shadier zones the dark, large leaf forms of Philodendron ‘Congo Rojo’ contrast against the bright, delicate foliage of maidenhair fern ( Adiantum aethiopicum ), and in the brighter areas, kangaroo vine ( Cissus antarctica ) creeps between and around the reliable Philodendron ‘Xanadu,’ while the whole space is unified by a luminescent carpet of Dichondra argentea ‘Silver Falls.’

“[Because the garden is an entry space] we wanted to work at the ground plane and at knee [level], but keep the shoulder and eye line open to visually connect the series of garden rooms that are formed by the shape of the dwelling,” says Dan.

Travertine pavers – a nod to the modernist vernacular of the house – have been placed over concrete ones and a loose bed of sandstone river pebbles covers the surrounding soil. A giant imperial bromeliad ( Alcantarea imperialis ) has been made the hero of the space through the careful selection of neighbouring plants that accentuate its striking form and flamboyant hues. I’m not usually a fan of bromeliads, but the composition of this one surprised me.

A smart, black aluminium pool fence runs between the entry courtyard and the pool and lounge area, which is more open to the sky. “We wanted to celebrate the barrier of the pool fence as a threshold between two distinctly different spaces,” says Jade.

On the southern side of the pool a more contemporary outdoor shower and arbour structure has been built over a new deck, featuring integrated seating. A steel skeleton provides support for timber rafters that run along the roof and three sides, with voids left in the rear wall where key views to surrounding suburbs are framed. The structure, also painted black, will soon be covered over by lady slipper vine ( Thunbergia mysorensis ) and adorned with its elegant orange-red flowers.

With enough separation in grade between the deck and the play lawn below, a pool fence was avoided. In this third space or garden room, a slightly surreal take on the suburban backyard has been created – think of work by Ian Strange or Howard Arkley – where a flat lawn is bound by a black paling fence and the only features are a clothesline and a square sandpit filled with toys.

As we wrap up our visit a refreshing breeze blows through the garden from the north. The three-to-four-metre pink trumpet tree ( Tabebuia palmeri ) growing through the entry arbour beautifully captures the sound of the breeze with its open canopy of rounded leaves. It’s this attention to detail, where even the aural qualities of foliage are a consideration, that makes this garden a delight. It’s clear that the close collaboration between architect and landscape architect has produced a home and garden that are highly pragmatic and yet dynamic, textural and diverse. 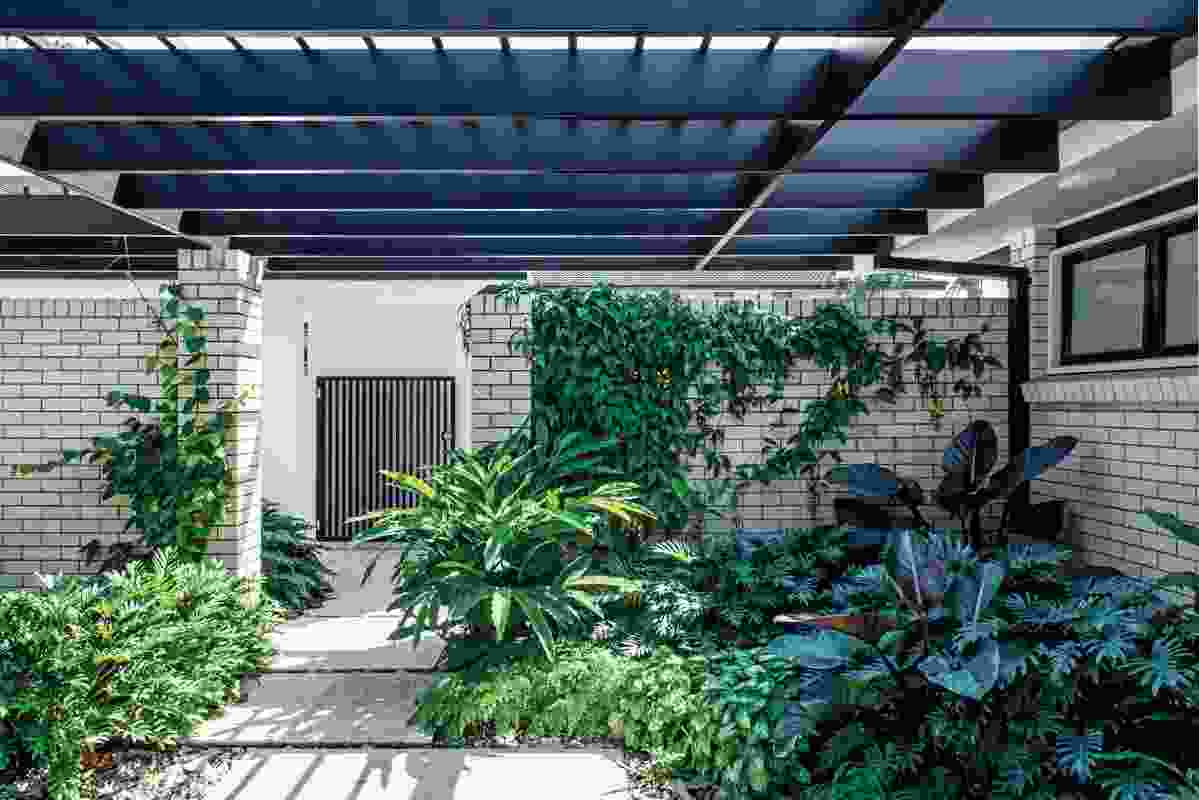 The entry courtyard is a mix of shades of grey and green that highlights various foliage textures, with a ground layer of travertine pavers over sandstone river pebbles. 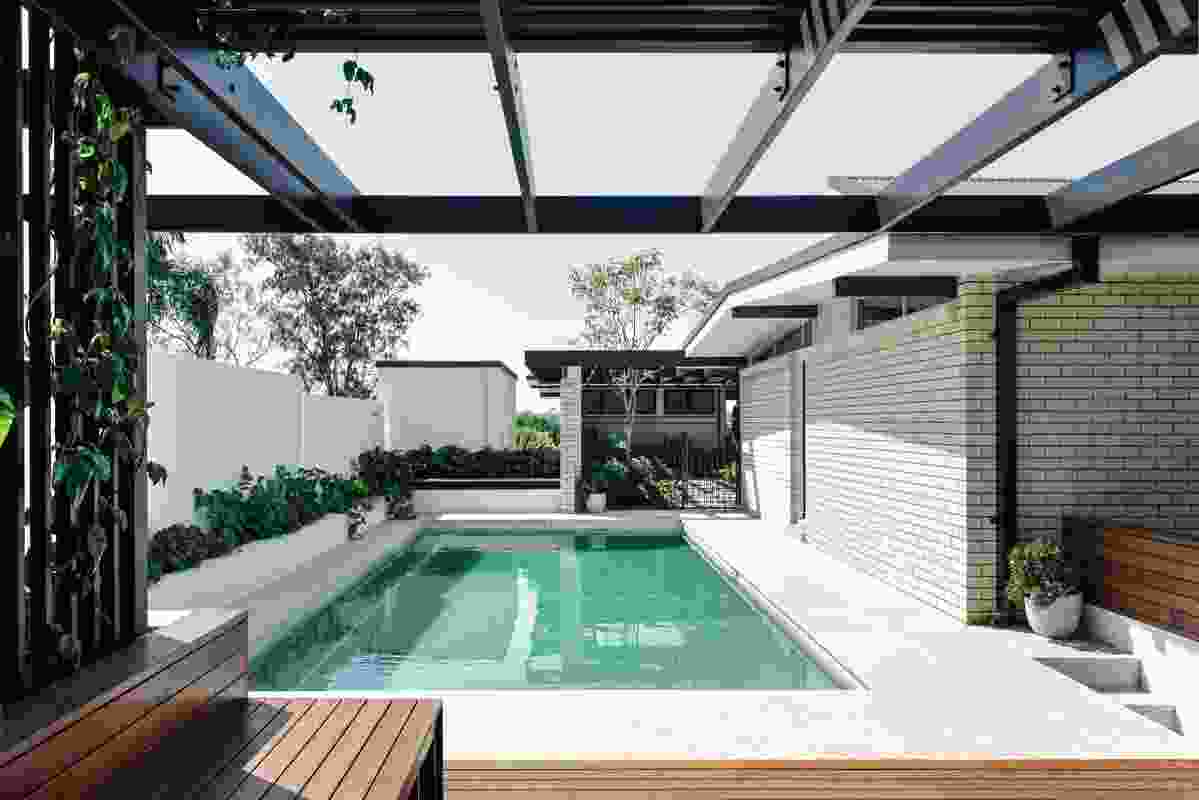 The pool area provides the family of six with an extra living area – complete with a pool lounge and outdoor shower. 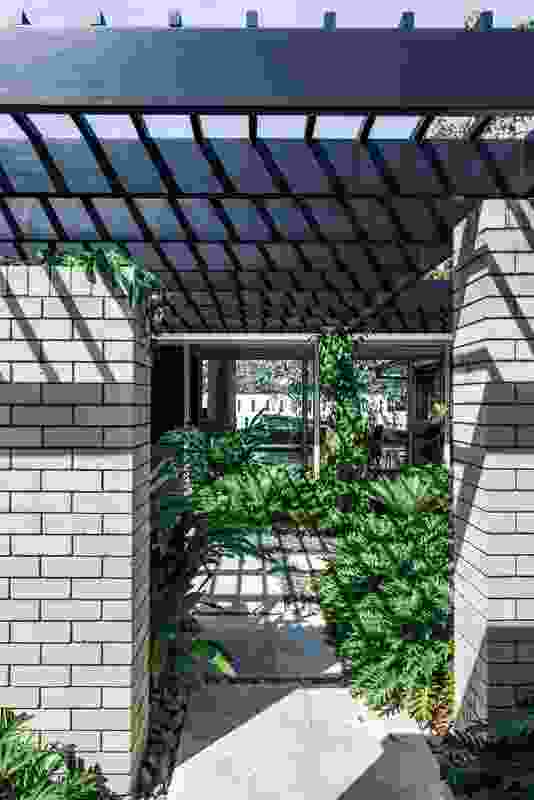 The black timber arbour above the entry courtyard affords privacy from the three-storey block of flats across the road. 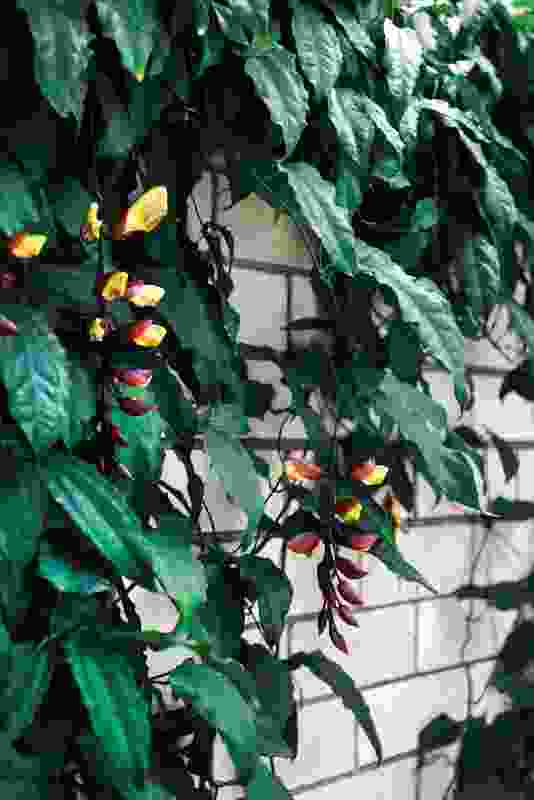 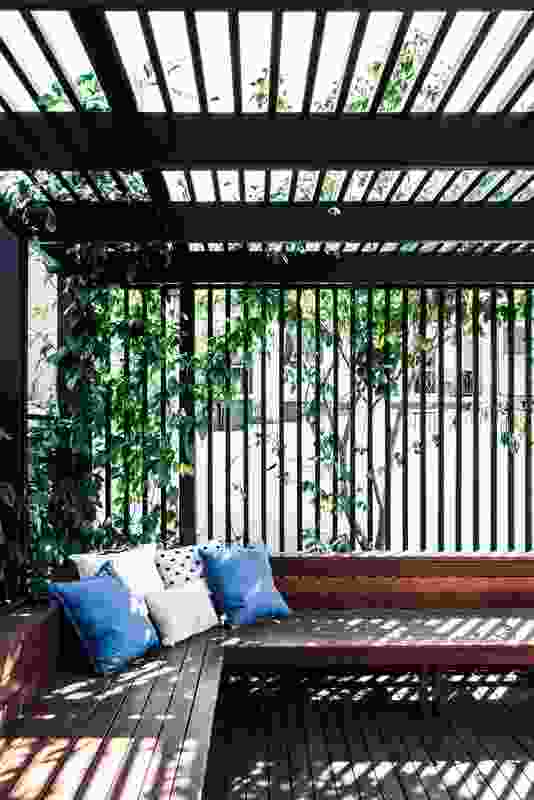 Integrated timber seating wraps around the edge of the shaded pool lounge. 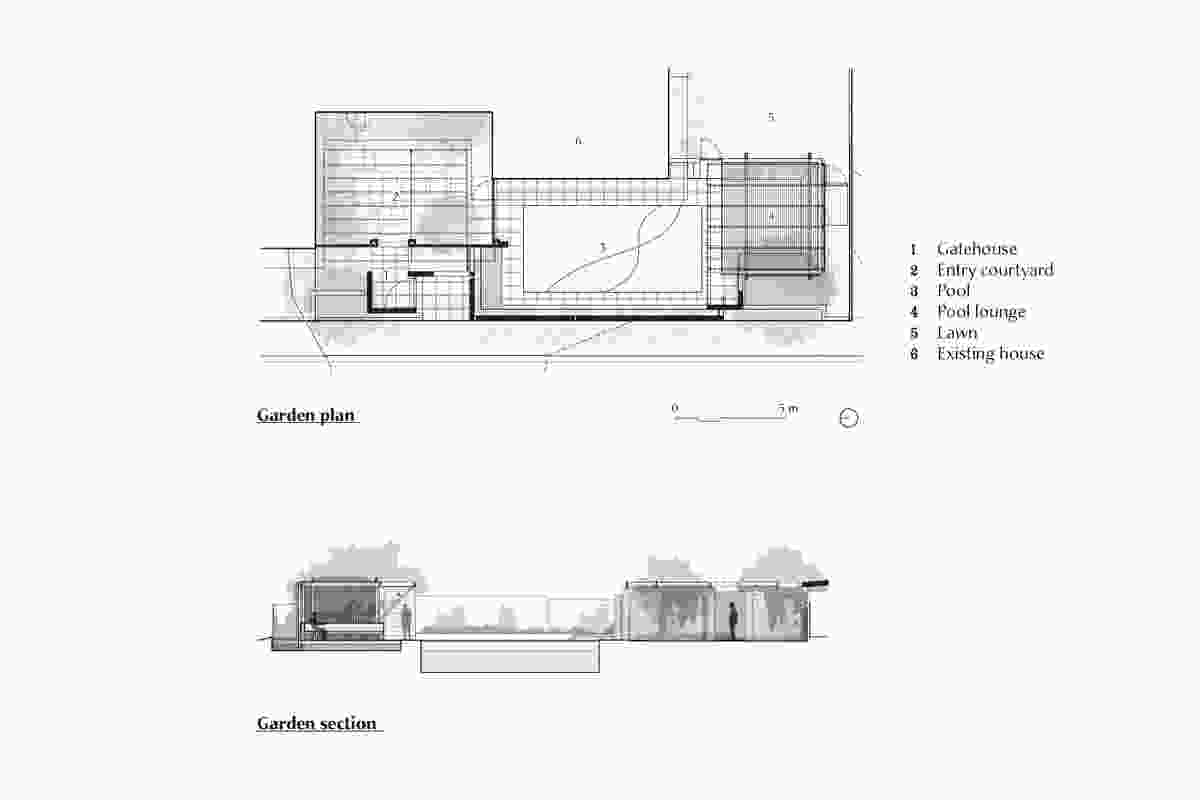