Designed in 1955 by Chancellor & Patrick for Gerald and Ellen McCraith as a holiday house, this home captures the optimism of Australian beach culture at the time.

The expressive structure defines the form and interior volumes of the Butterfly House.

Stepping into the living room of the Butterfly House on Victoria’s Mornington Peninsula, the waters of Port Phillip Bay are revealed through triangulated picture glass windows.

Designed in 1955 by Chancellor and Patrick, the house exhibits one of the key tenets of the International Style – the desire for infinite space. This does not refer to floor size (unlike the obesity of much contemporary Australian housing) but rather the designer’s skill in dissolving the north wall plane so the view lines flow unimpeded from inside to outside, providing a direct connection with the water, horizon and sky.

What is the firsthand experience of the Butterfly House? Artist Bin Dixon-Ward’s first memories of the house include weekend barbecues, days spent at the beach and chores in her grandparents’ garden. These childhood experiences stretched generations, over five decades, until the family gifted the dwelling to RMIT University in 2013. It was in her twenties that Bin developed an interest in modernist design, coalescing into her lecturing and practising in gold- and silversmithing. It is a signifier of great architecture that the house’s shapes, colours and materials influenced Bin’s unconscious and, at least in part, the direction she would later take in life and work.

RMIT University now offers the house for charitable purposes in relation to teaching, learning and research – specifically as a writer’s retreat. Reading the comments by writers in the visitors’ book reveals experiences of the house as a tranquil eyrie, with the only distraction the view to Port Phillip Bay in the north, an antidote to writer’s block.

The house is a minimal exposition of an archetypal Australian form, the coastal house. It displays a singular unity of structure and conceptual intent. It is small, lean and taut, fulfilling its function perfectly. This singular obsession with combining spatial geometry and structure can be seen in the forming of the triangulated doors and windows, mirroring the triangular steel truss frame, which is light and strong. The use of colour is confident, and when applied to wall planes emphasizes view lines to the water. The material palette is limited and inventive – vinyl floor tiles are also used on the kitchen benchtop. Joinery and structure are seamlessly integrated.

When viewing the floor plans alone, the design seems very straightforward. However, it is the dramatic section and elevation that afford the house its dynamism. Inspired by the panoramic water view, encouraged by the steep hillside setting, it is this desire to defy gravity that characterizes this house. The floor plan is remarkably efficient – there is little circulation space and a high percentage of useable floor space. The Butterfly House, also known as the McCraith House, was built at a time – only a decade after the end of the war – when postwar austerity was giving way to the 1950s craving for leisure time. Chancellor and Patrick has captured perfectly this intersection of the economy of materials with connection to the environment.

Although now in service as a writer’s retreat, the house can be seen as a prototype of the weekender, as opposed to the permanent residence. Storage is almost non-existent, the kitchen is utilitarian and children are shoehorned into a six-bed bunk room the size of a laundry. As an exemplar the Butterfly House has influenced the design of other weekenders. The Trunk House, by our practice Paul Morgan Architects, demonstrates a similar idea of the truss as crucible for dwelling, and our Cape Schanck House shows an affinity with the dissolved wall plane, angled steel columns as expressive devices and the integration of joinery elements.

Sixty years on, how far has house design evolved: could we do better? Despite good passive thermal planning, including wide north-facing eaves, the house lacks a proper thermal envelope and as a result is hot in summer and cold in winter, like most houses of the era. But as an essay in capturing the optimism of Australian beach culture of the time, displaying a masterful control of light, planes and space with great economy, the Butterfly House transcends style and period. It takes its place alongside the more famous projects by Robin Boyd, Harry Seidler and Roy Grounds, and loses nothing by comparison.

Great domestic architecture transcends style. While neighbours in 1950s Dromana may have suspiciously eyed the newly landed “spaceship” or “alien” house, Bin Dixon-Ward gives testimony to the idea that enjoyment and livability can be enhanced by highly skilled conceptual design. 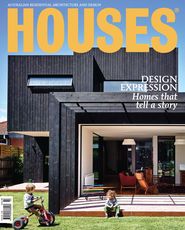 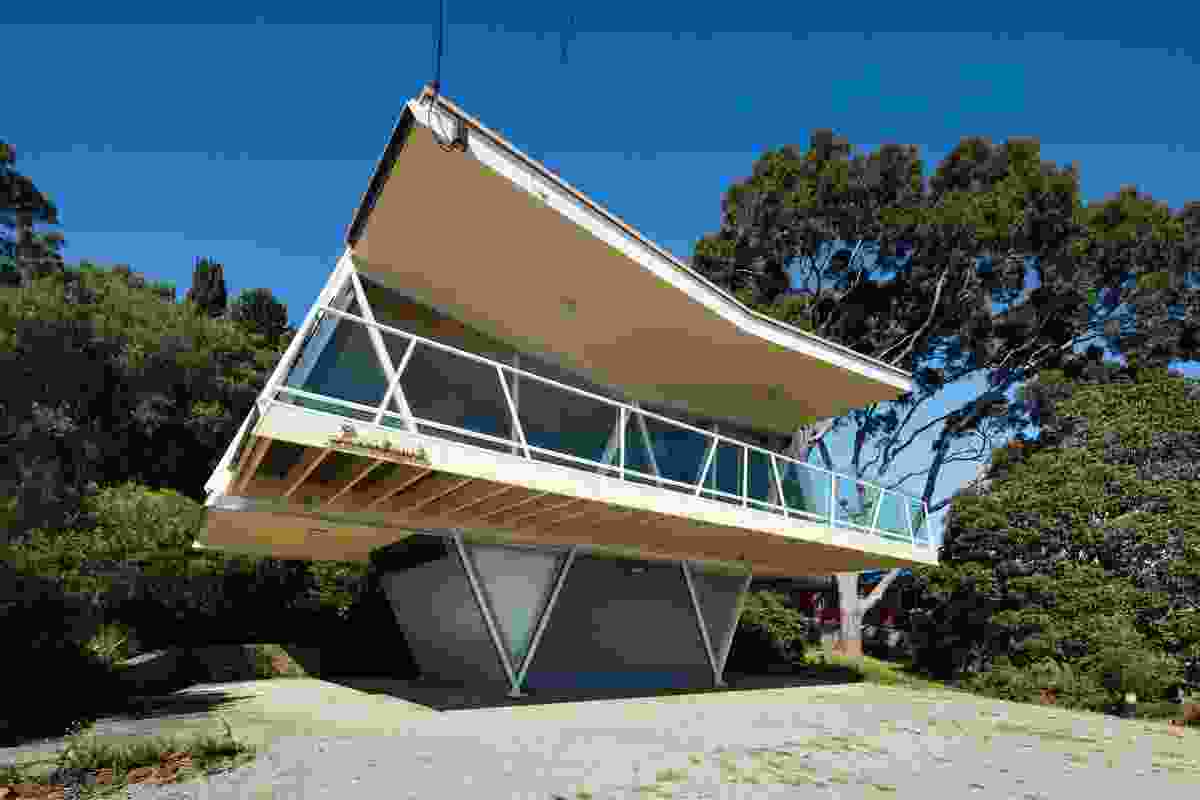 The expressive structure defines the form and interior volumes of the Butterfly House. 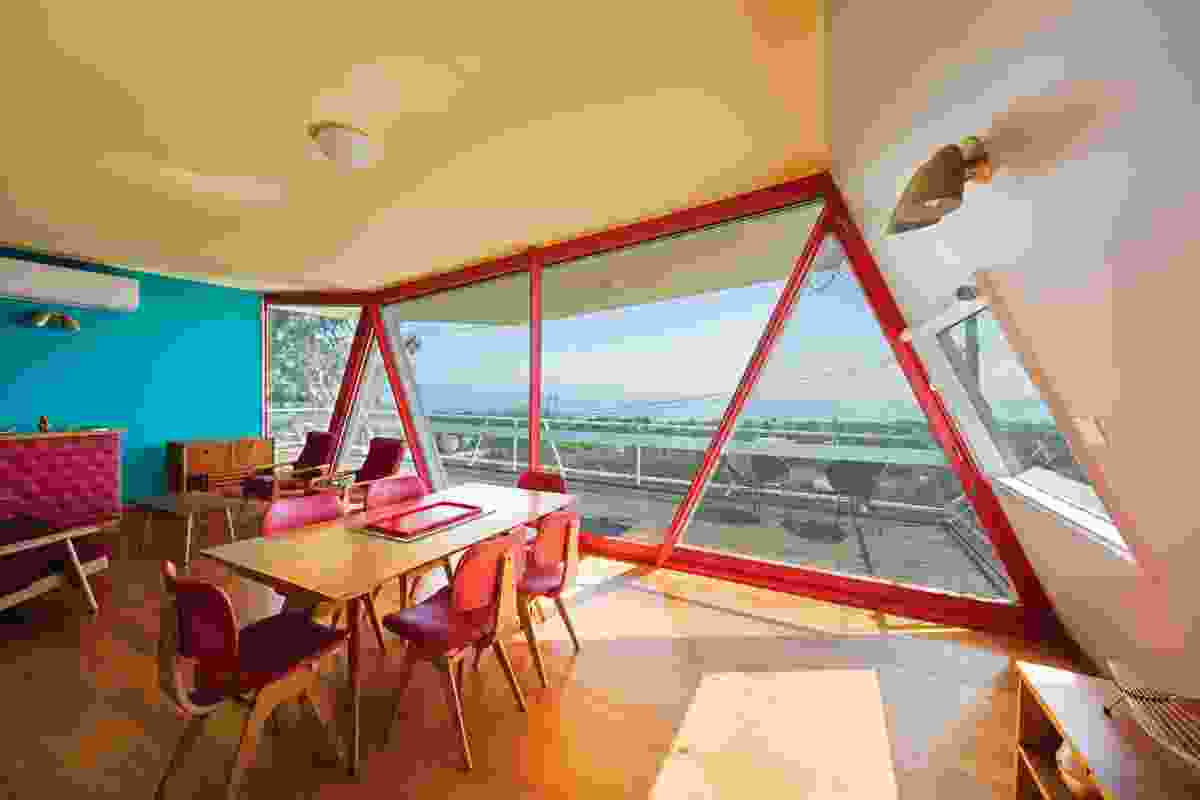 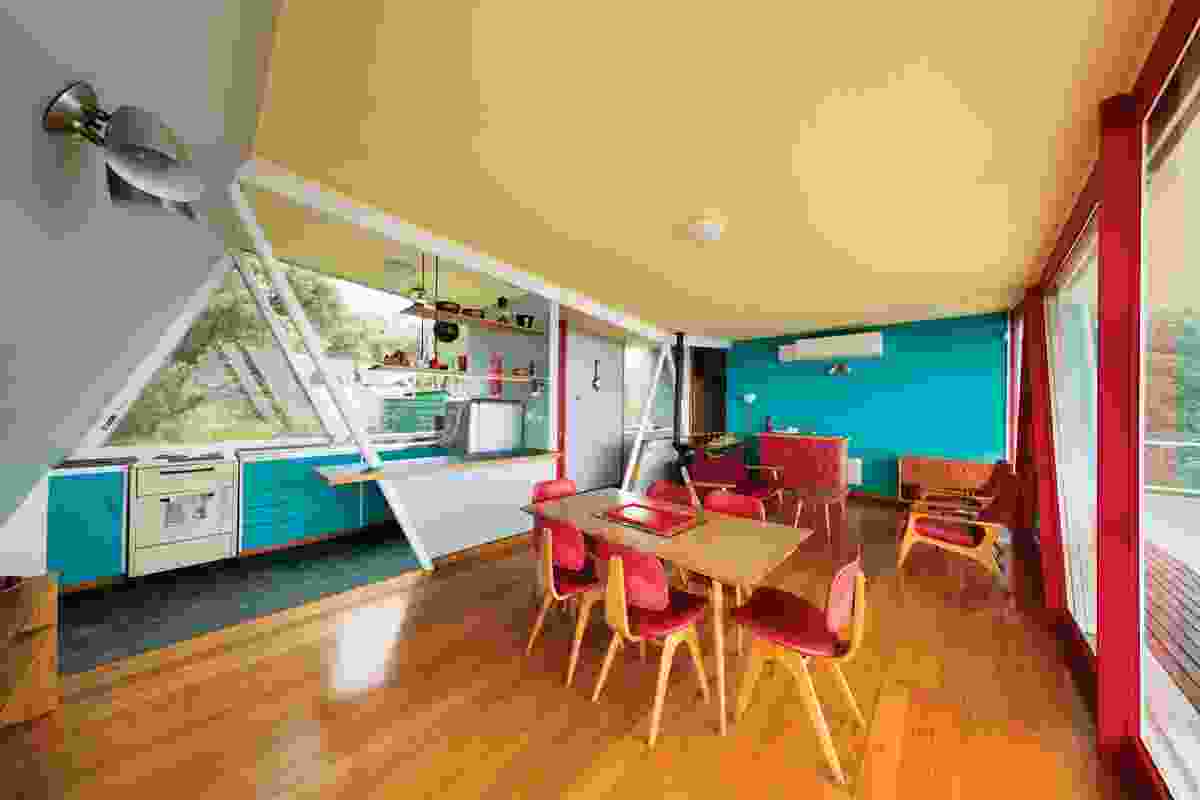 The use of colour is confident and the material palette is limited and inventive. 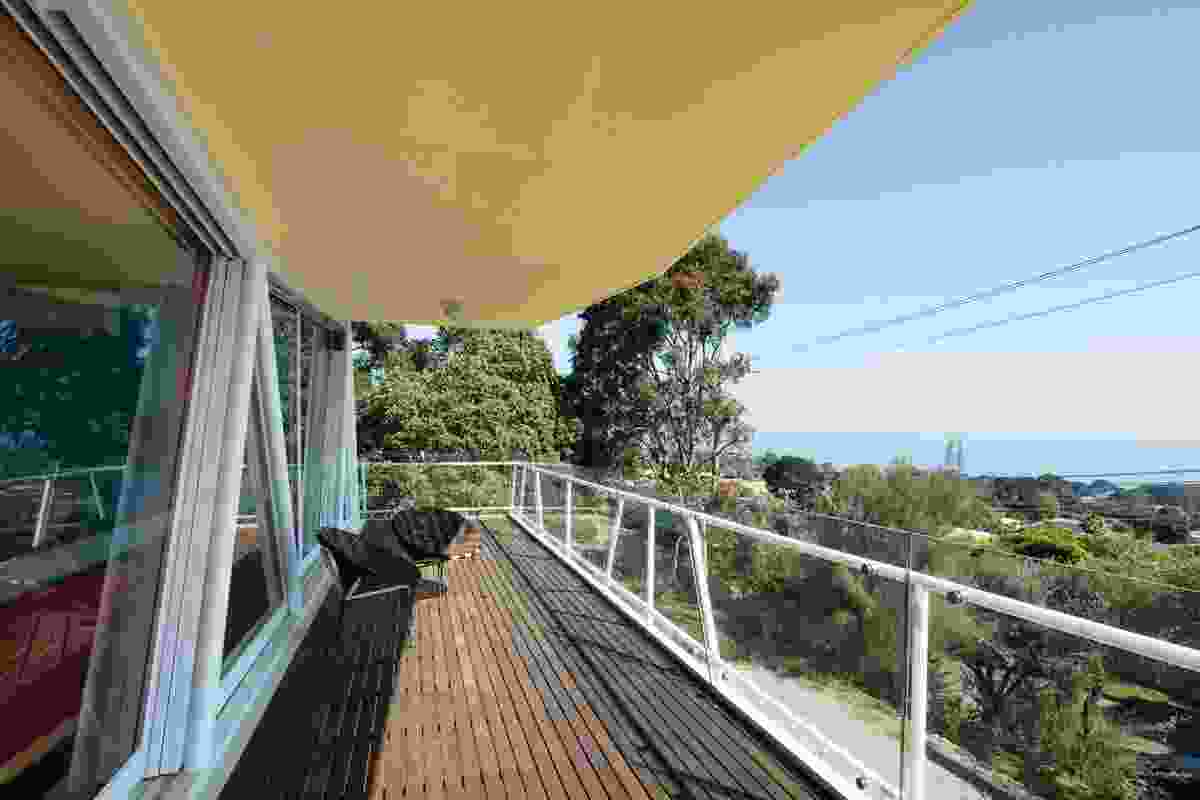 A shaded balcony extends out to views of Port Phillip Bay to the north. 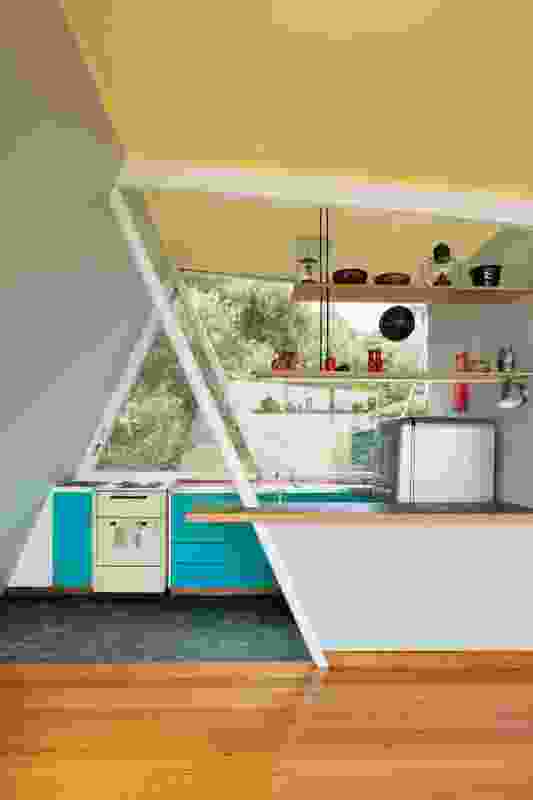 Storage is minimal in the utilitarian kitchen, which features vinyl floor tiles as a surface on the bench. 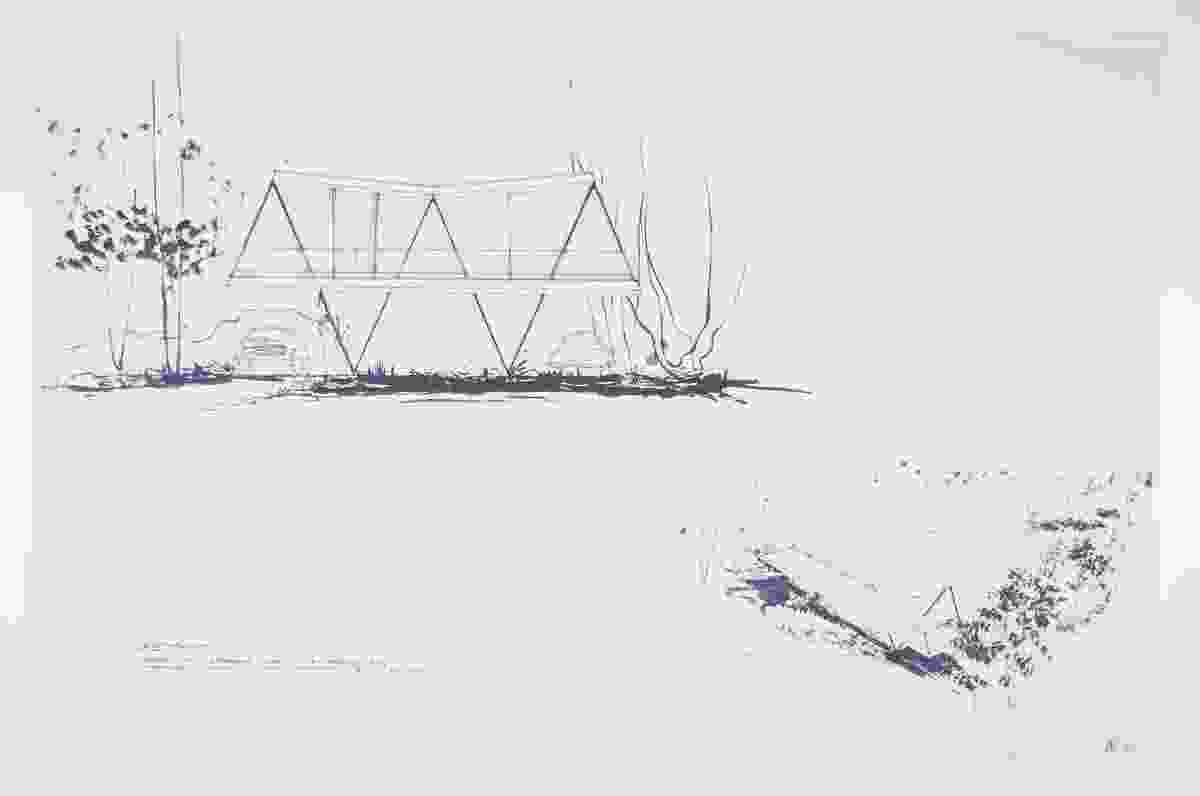 Sketches of the Butterfly House from 1956 display the singular unity of structure and conceptual intent. 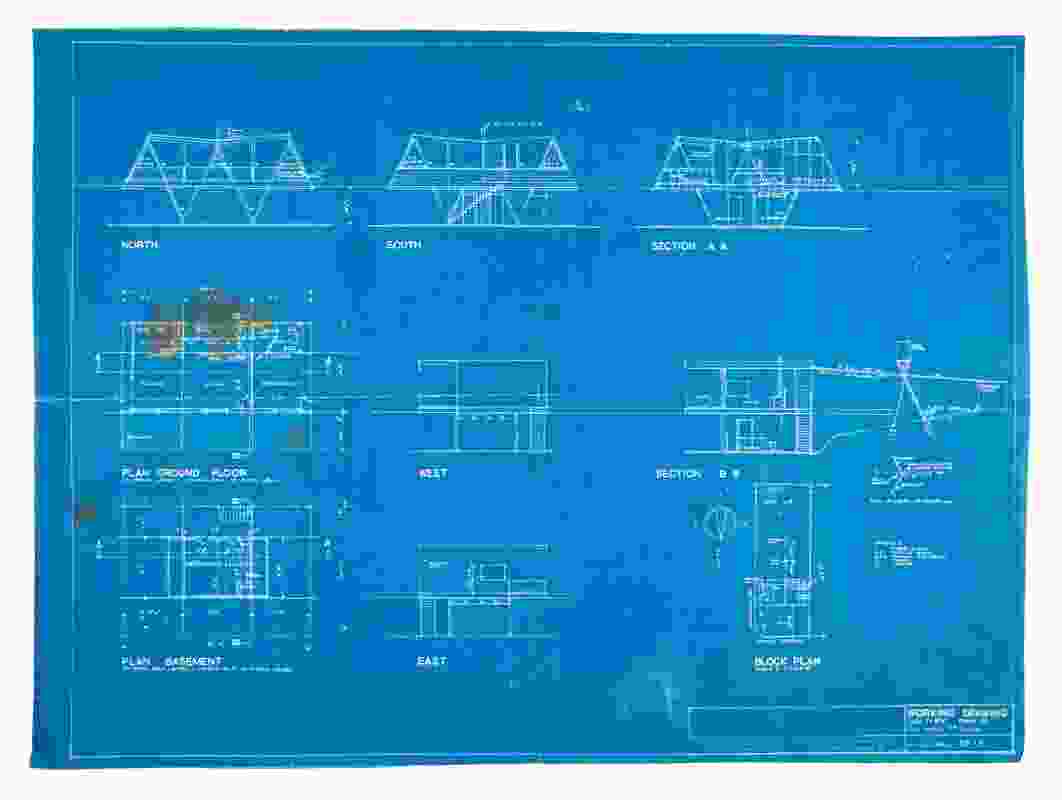 Working drawings of the Butterfly House from 1955, showing that the section and elevation are that afford the house its dynamism. 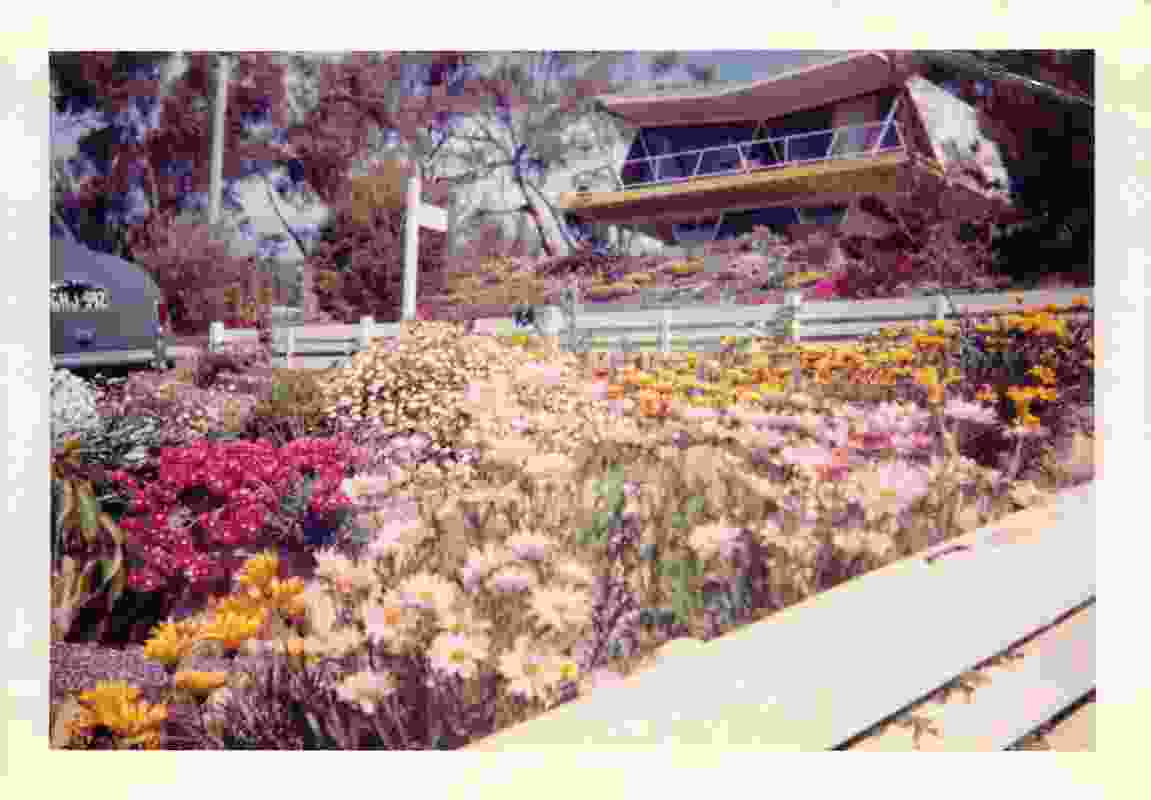 A photograph of the Butterfly House taken in the late 1970s.