A small but reverential addition to the Cathedral Precinct in Perth reinvigorates its heritage context and reintroduces site to citizen.

I expected to experience many things on visiting the multi-award-winning Cadogan Song School by Palassis Architects, but I did not expect a feeling of what could be called solace. It had nothing to do with being soothed by a beautiful and inspired addition to a heritage precinct of the city I live in – though that is what the Song School is. Rather, as someone who thinks wistfully of the loss of so much early architecture from Perth’s city centre during the twentieth century, I was moved by the sense that the addition of the Song School has granted the precinct an extended lease on life, one more profound and potentially more enduring than the physical protection granted by the State Heritage Register alone. Together, the Song School’s public and private functions have the potential to rekindle the public’s affinity and esteem for the site. In this way, the project demonstrates the power of good heritage architecture to allow aging built environments to evolve with, rather than become vestigial to, their cities and people.

The Cadogan Song School is a carefully crafted addition to three heritage-listed holdings of the Anglican Diocese in Perth – St George’s Cathedral, Burt Memorial Hall and the Deanery, completed in 1888, 1918 and 1859 respectively. The school is quite literally nestled between the foundations of the cathedral and hall. Consequently, it had to assume an irregular footprint, though the architects have worked hard to mitigate any ill-effects of this arrangement.

A white concrete colonnade of vaulted arches steps lightly off the paving at the ground level of St George’s Cathedral and alights one storey below in the deanery plaza. It shelters the entrance to the Song School, accessed from the lower plaza, and an external spiral stair that enables pedestrians to move between the split levels of the site.

Inside is a music library, locker rooms and a new choir practice hall that is the acoustic twin of the cathedral chancel – it is a marvel of acoustic engineering that the architects have achieved this in a quarter of the volume of the original space. These facilities enlarge the performance capabilities of the cathedral, while the neighbouring hall gains a kitchen and additional bathrooms on its lowest floor.

The project reinvigorates its heritage context in two ways. While the addition of a private program for the site is one obvious advantage, it is the public persona of the Song School that works the hardest to reintroduce site to citizen – a function that Kevin and Jordanna Palassis believe interventions to heritage architecture should facilitate. These reintroductions are principally achieved through the way the project’s folly-like colonnade, spire and stair enrich the public realm of the Cathedral Square precinct. The Song School revels in the opportunity to connect audiences with the musical and Anglican dimensions of the precinct through an architecture that is joyful, inviting and selflessly respectful of its heritage forebears.

The character of the project emerged from several parameters imposed to improve or preserve certain qualities of the site. The decision to maintain sightlines to the Ascalon sculpture by Marcus Canning and Christian de Vietri – a swirling white form wrapped around a lance that evokes the battle of Saint George and the dragon – pushed the program of the Song School underground. This enabled the above-ground components of the project to manifest as a “non-building” – something that could resolve the visual imbalance of the hall, cathedral and deanery without imposing its own competing architectural character.

To this end, Palassis’s hypothesis that an either white or black built form would be sufficiently incorporeal against the red-brick bodies of the hall and cathedral proved correct – the white material lends strength to the form and scale of the colonnade and spire, forging a path between the encroaching forms on either side. Concrete was selected for its irreducible structural simplicity, which the architects felt would uphold the precedent set by the existing architecture’s structural and material honesty, and for the slender forms it made possible as the project’s primary external material.

The internal spaces of the Song School employ a similarly honest palette of solid American oak, perforated brass sheeting and soft concrete arches of the same luminous material that connects the subterranean choir chamber to the colonnade forms above. Though the architects thought of the underground Song School as the crypt the cathedral never had, the ample natural light it receives through the protruding facade and adjacent windows works in tandem with warm-hued materials to banish any atmosphere of entombment. These private spaces are mighty in their grace, quality and sensitivity to the requirements of a complex brief – it is not surprising that the project received the Julius Elischer Award for Interior Architecture at the 2018 Australian Institute of Architects’ Western Australian awards.

In searching for appropriate forms to work with, the architects elected to reinforce rather than mimic the qualities of the surrounding architecture. The vaulted arches of the colonnade and the crisp, smaller-scale punctures in the facade of the choir hall allude to the lancet windows visible in the cathedral tower. The project draws attention to specific features of the religious architecture that surrounds it by creating visual coincidences with similar forms – looking through the colonnade from the west, for instance, concentrically aligns the colonnade lancet with the arched windows of St Andrew’s Church on the neighbouring lot. A purposeful and subtle kink in the arrayed forms of the colonnade aligns the view and illustrates this point of architectural similarity.

The composition, scale and form of the project also articulate the site’s musical program – the spire on the colonnade is split into the twin prongs of a tuning fork, while the human-sized arches of the colonnade are physical traces of the choir’s procession between the practice hall and performances in the cathedral.

The colonnade and sumptuous spiral stair are delicate and beguiling – a clearly legible invitation to participate in the intriguing and delightful spaces that speak to the precinct’s musical and Anglican identity. 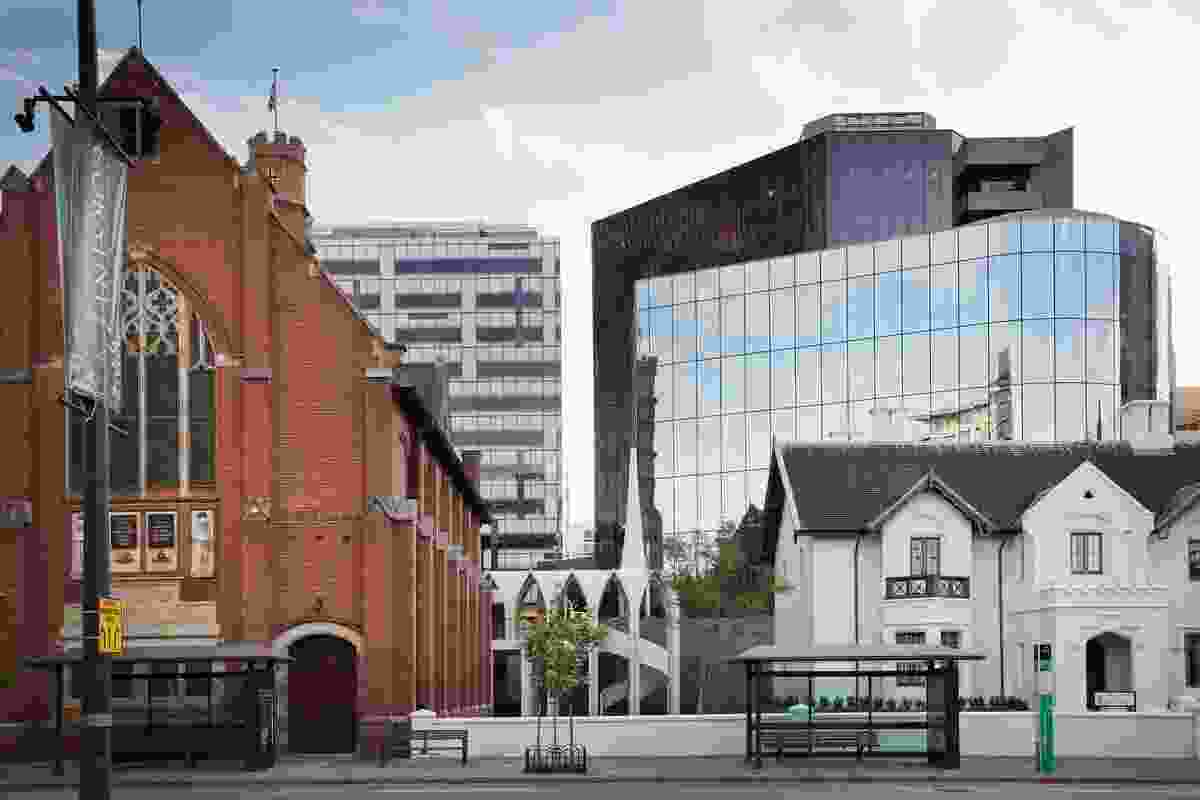 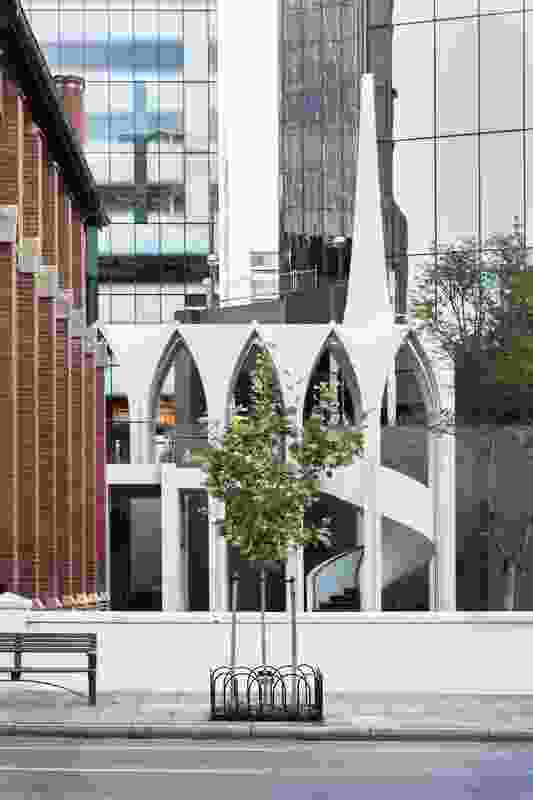 A white concrete colonnade of vaulted arches steps off the ground level of St George’s Cathedral, leading to an external spiral stair that connects pedestrians to the lower plaza. 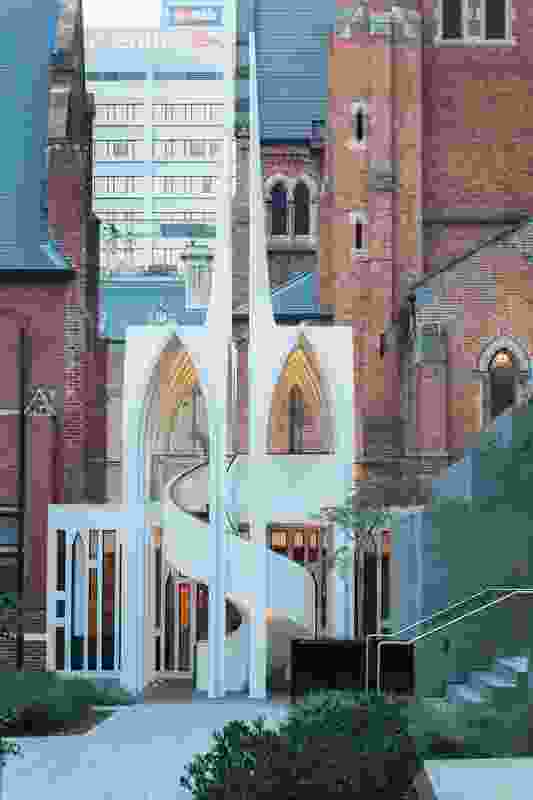 Nestled between the heritage-listed St George’s Cathedral, Burt Memorial Hall and the Deanery, the building has a folly-like colonnade, spire and stair that enrich the public realm. 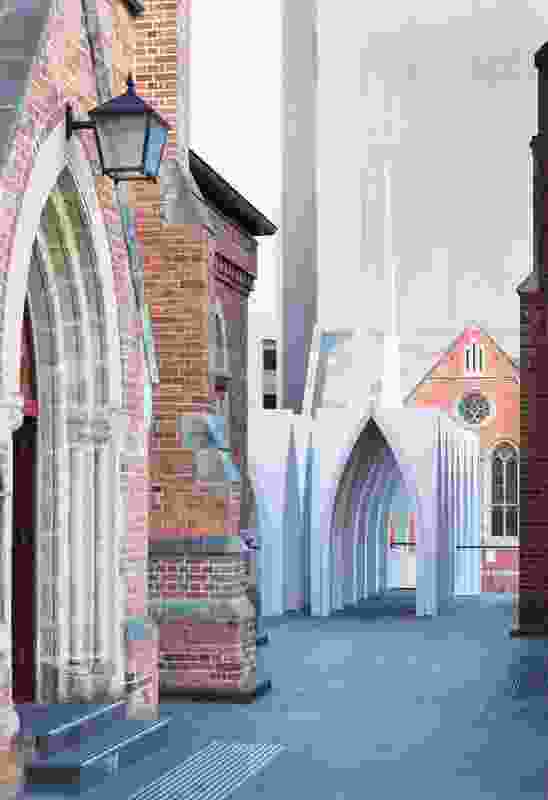 The thoughtful intervention demonstrates the power of good heritage architecture to allow aging built environments to evolve with, rather than become vestigial to, their cities and people. 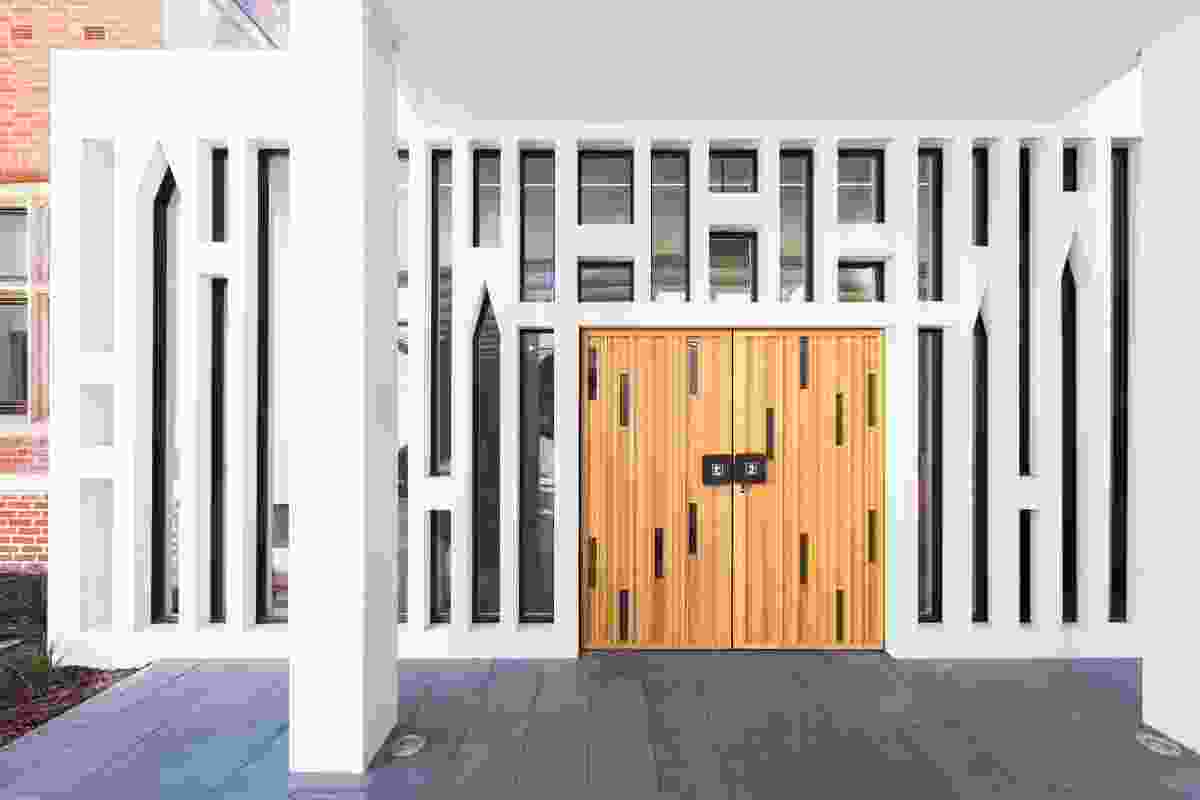 Elongated windows in the facade of the choir hall – some of them vaulted – allude to the lancet windows of the surrounding architecture. 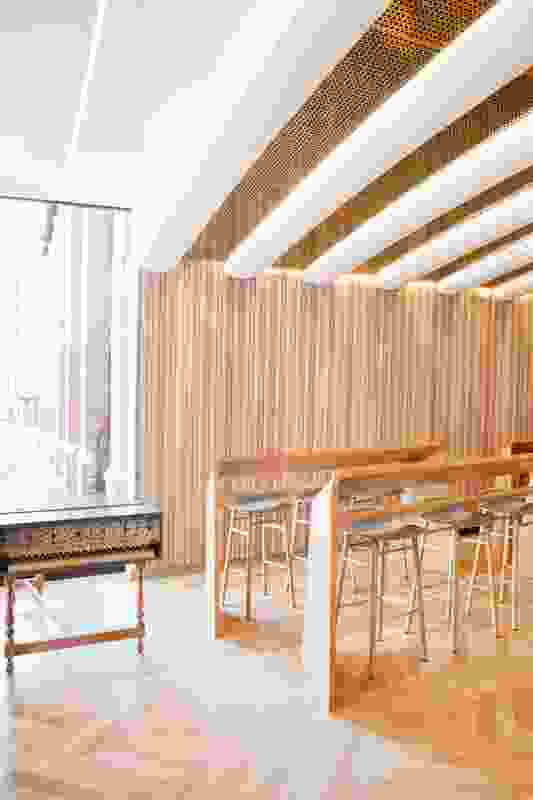 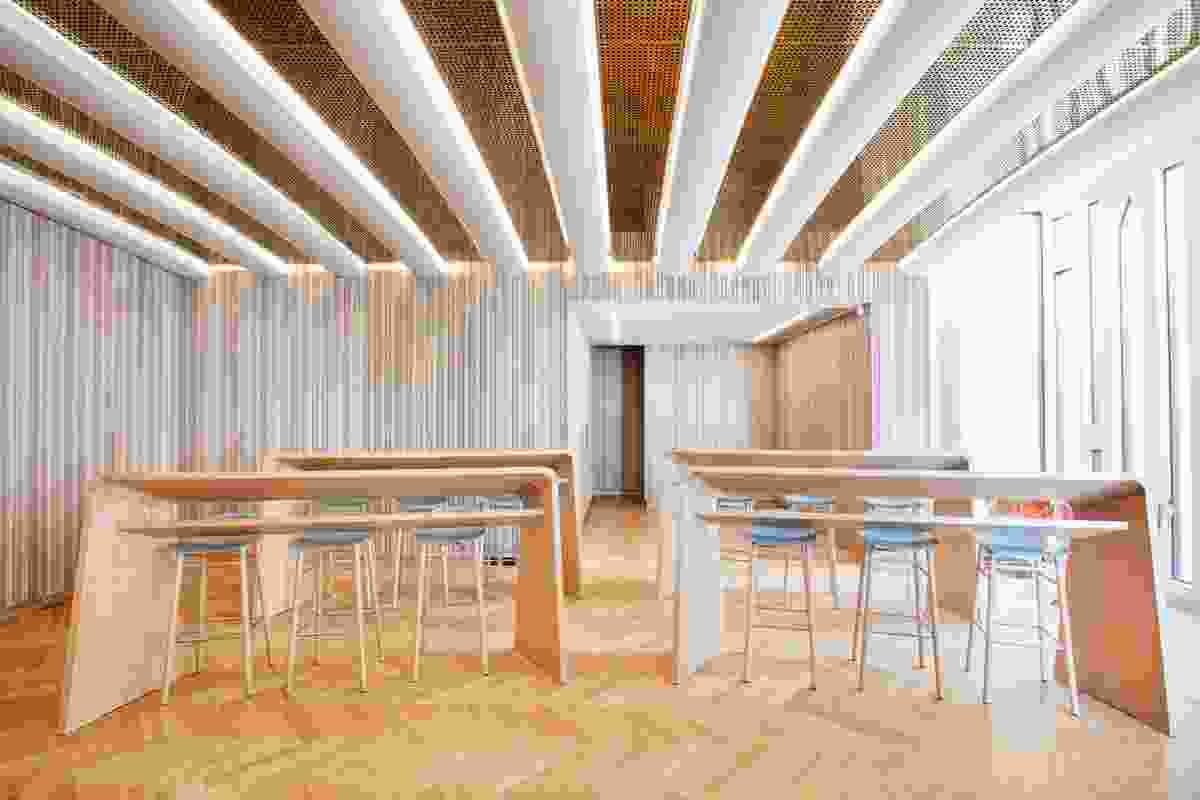 The choir practice hall is the acoustic twin of the cathedral chancel. 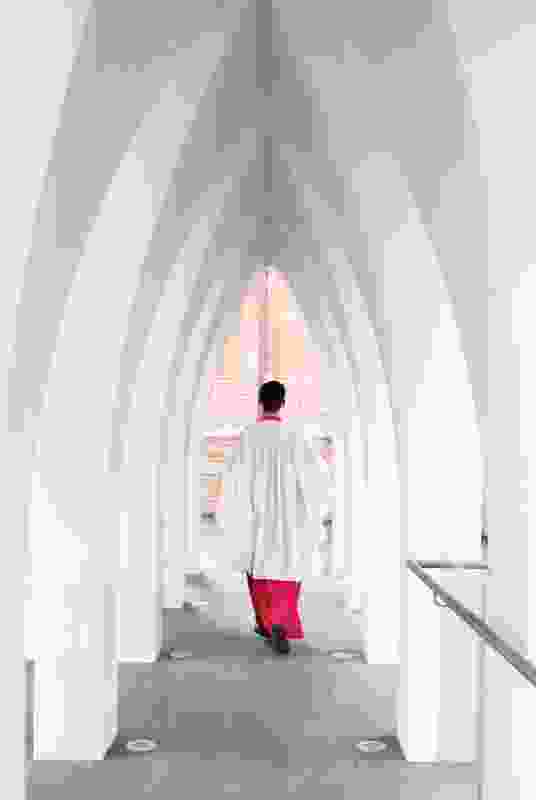 The Cadogan Song School provides facilities for the choir of St George’s Cathedral. 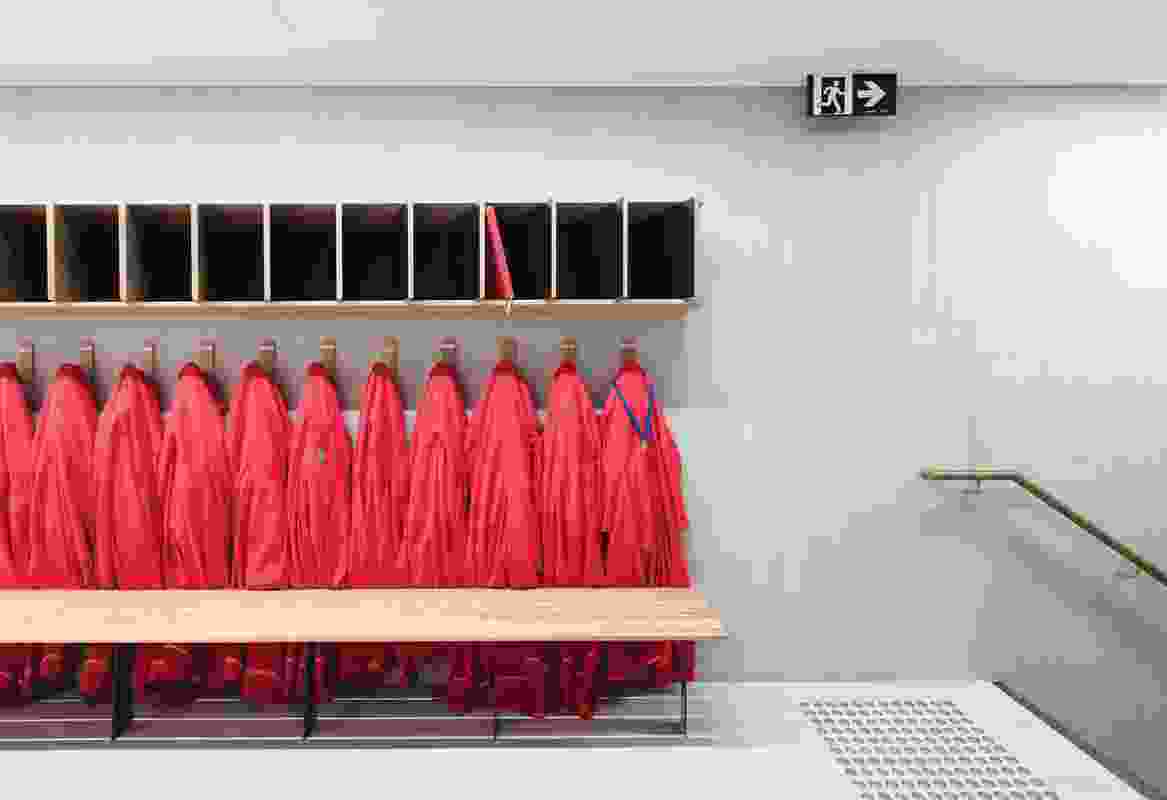 Internally, the Song School is conceived as an underground crypt with an intimate scale that is well-suited to the requirements of the practice rooms.