Reaching out to its suburban context, this bold chimney-like addition to an existing dwelling by Bosske Architecture adds a new voice to the home while reflecting the suburb’s past.

Designed in the manner of an oast, the extension is a reference to the industrious local migrant community.

Camino House is a small project exploring big ideas. With a background in public architecture, Caroline Hickey of Bosske Architecture considers urban notions of connection and scale on a site of just two hundred and fifty square metres. As a challenging, suburban infill project located in the inner-northern Perth suburb of Mount Lawley, the need for a small and well-formed space pushed the architects to create a generous house with an outward focus, firmly anchored in the tapestry of its suburban context.

Federation and Colonial-style houses are typical of Mount Lawley, though in certain pockets of the suburb, the largely Italian migrant population of the 1960s and 70s remodelled many of these houses, overlaying a distinctly European aesthetic. This demographic also contributed a form of suburban agriculture, integrating vegetable gardens, drying sheds and pizza ovens to the rear of many residential blocks.

Camino House is firmly embedded within this vernacular. The existing house is purposefully retained, a sustainable response that acknowledges the existing suburban streetscape. The 1960s concrete verandah and facade – painted in a unifying grey tone – neutralize the modest frontage as if fossilized, drawing attention to the bold addition rising in the background. Articulated in red clay tiles, the extension confidently mimics the surrounding roof forms, reworking the notion of a traditional chimney to provide a thermal chimney for the Perth climate. Designed in the manner of an oast, it is a tender reference to the industrious culture of the migrant community.

Internally, the existing layout of the Federation house is retained to the front and an existing room was refurbished to accommodate bathrooms and a small study nook. The threshold to the addition is subtly marked by a change in floorboard direction and, more palpably, via a black, L-shaped portal of integrated joinery. The extension takes the form of a minimalist open kitchen, dining and living volume, opening outwards to a serene, timber- decked courtyard.

The weighty upper level seems to push into the interior living volume, creating a raking ceiling around the galley kitchen and living room. This volume reveals glossy tangerine-coloured vertical panels, injecting a burst of colour into the otherwise monochromatic palette. Checkerboard tiling provides a bold backdrop to the kitchen and bathroom, personalizing the interior while subtly making reference to the punchy hues and patterns of the 1960s.

The kitchen’s island bench mirrors and manipulates the form of the threshold portal, a play on volumes of black and white building blocks. Similarly, the very corner of the upper-level floor seems to teeter on the edge of the kitchen joinery, a detail that plays once more with the house’s mass and spatial volumes. Direct views are afforded from the kitchen to the front door and beyond, fostering a connection between the interior and the front yard, which accommodates typical backyard occupations.

The lateral courtyard widens the interior volume. The timber decking acts as a continuation of the interior floor plane, while the operable glazing physically unites the interior and exterior spaces. Framed by perpendicular walls that are treated as section cuts, the courtyard appears dissected from the main volume of the house. The incisions are evident through the planed facades and mortared edge of the tiles – a standard detail, yet one not often expressed. The Pacific teak board and battens and black vertical garden sheathing on these surfaces provide a graphic, textural element to the courtyard.

Camino House’s upper level comprises a spare room/office and balcony, accessed via a narrow stairwell of chartreuse-coloured carpet. It is from this level that upward views to a thermal chimney shaft are offered. The play of light on the vertical planes is striking; sharp beams and soft gradients reflect off the minimalist surfaces. Louvred windows present tailored views that crop out the surrounding houses, instead framing vignettes of chimneys and roof tiles from the neighbourhood. These views take on a photographic appearance, in which the house’s context is curated and the concept of the oast is reaffirmed.

From the rear of the block, the chimney form appears vast. The tiles are meticulously detailed to achieve a continuous surface extending from the chimney to the facade below. These unified surfaces create a strikingly solid and geometric form that has a strong presence from any vantage point, bringing an element of uncertainty to the idea of “home.” Subtle nuances inherent in the natural red clay tiles impart a painterly finish to the robust form, enabling the form to meld with neighbouring roof lines.

Connection and scale become interchangeable concepts when considering Camino House. The addition thoughtfully connects with the fabric of the existing dwelling and, though somewhat self-contained, its presence reaches out to its suburban context. Through its immense scale and striking resemblance to an oast, Camino House adds a new voice to the home’s narrative, while boldly exposing the suburb’s industrious activities of the past. 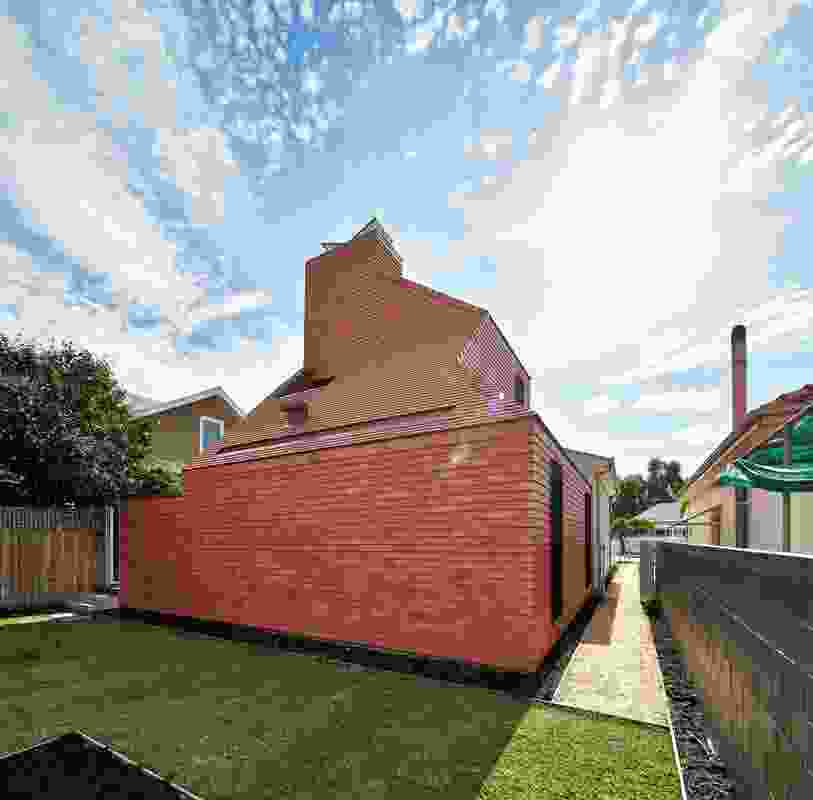 Designed in the manner of an oast, the extension is a reference to the industrious local migrant community. 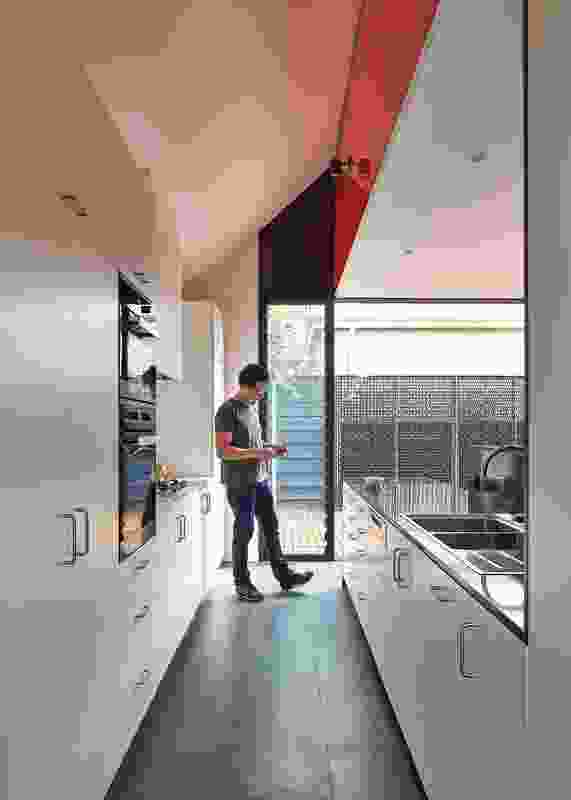 The lateral courtyard widens the volume, while operable glazing lets in ample daylight and unites the interior and exterior spaces. 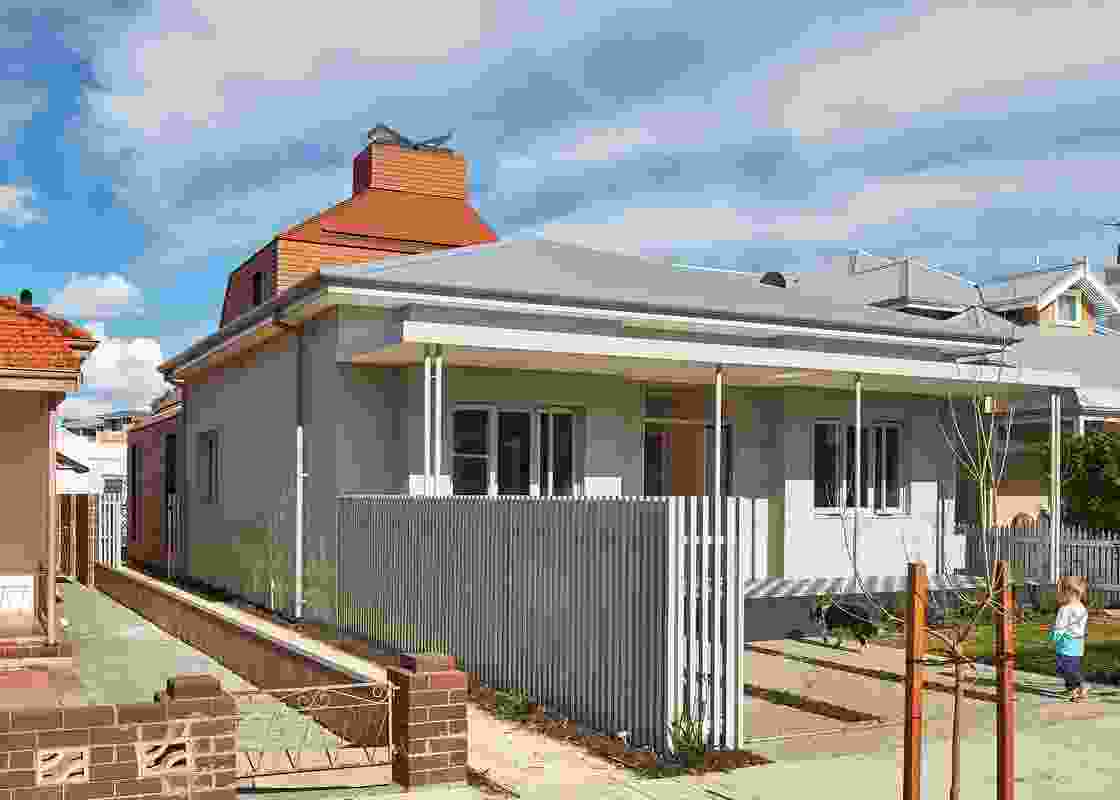 The 1960s concrete verandah and facade are painted in a unifying grey tone, drawing attention to the addition. 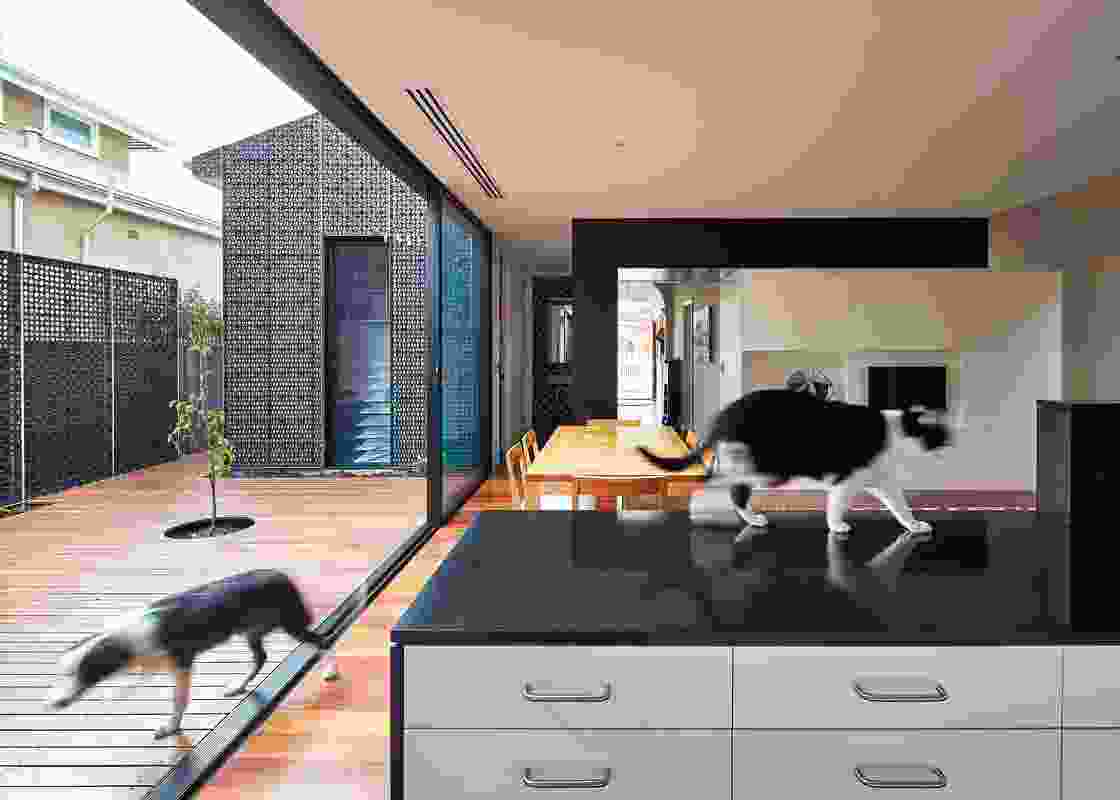 The extension takes the form of a minimalist open kitchen, dining and living volume, opening outwards to a timber-decked courtyard. 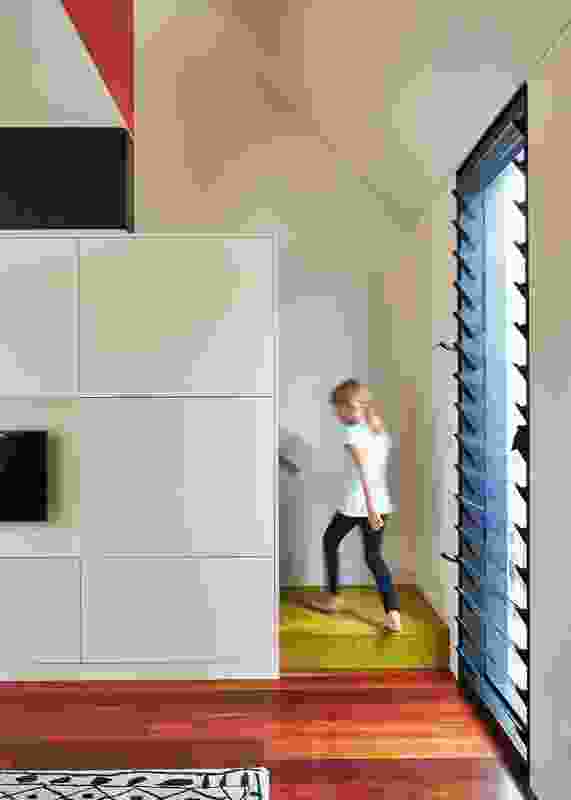 The upper level’s spare room and balcony are accessed via a narrow stairwell of chartreuse-coloured carpet. 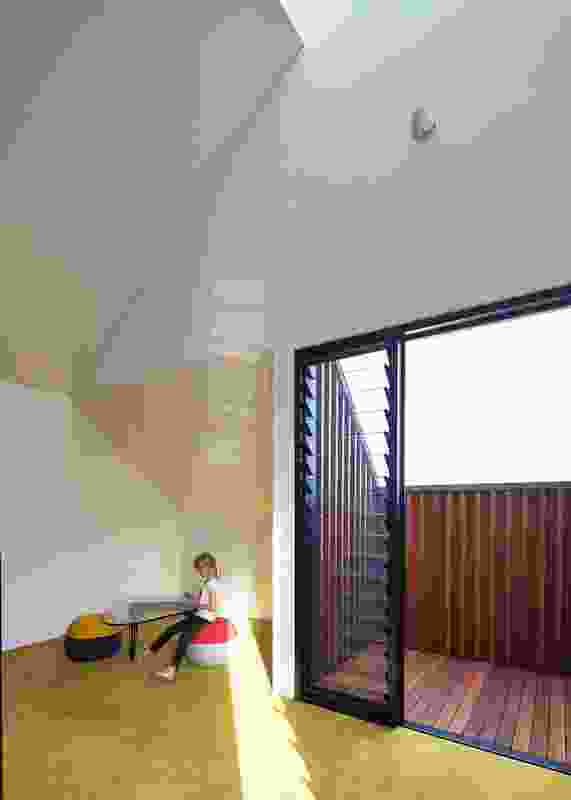 The play of light on the upper level’s vertical planes is striking; sharp beams and soft gradients reflect off the minimalist surfaces. 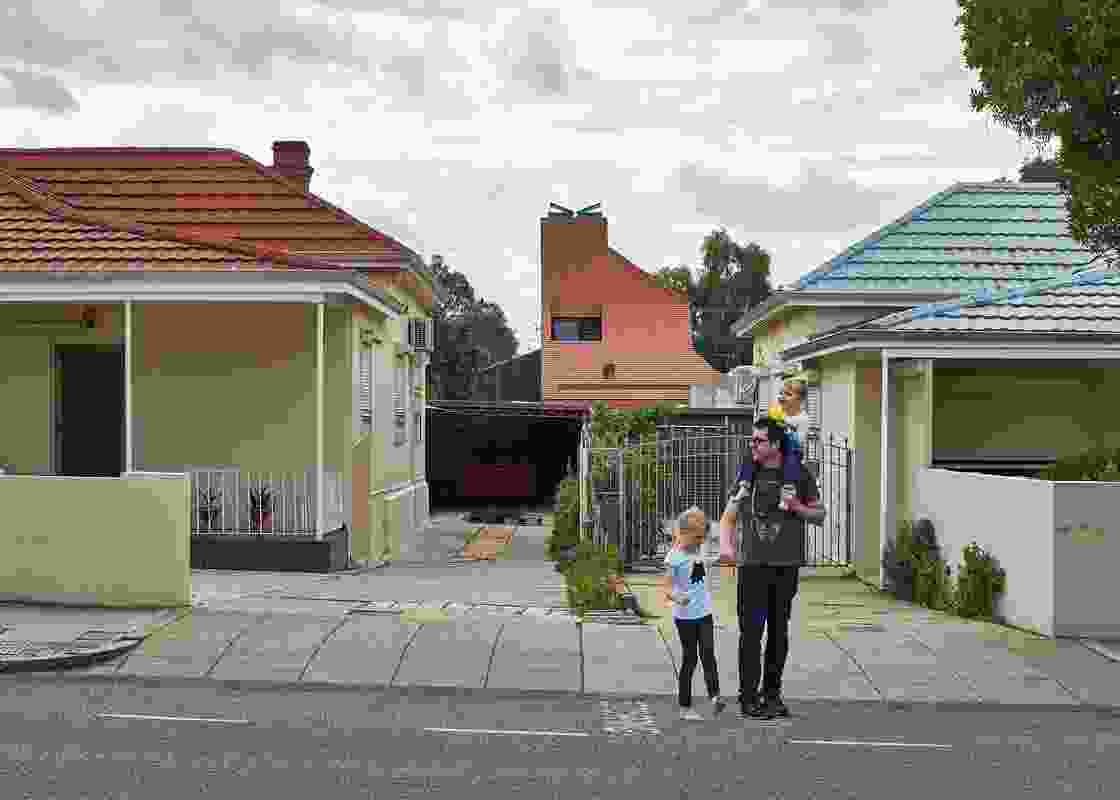 The bold addition rises in the background, simultaneously eye-catching and anchored in the tapestry of its suburban context. 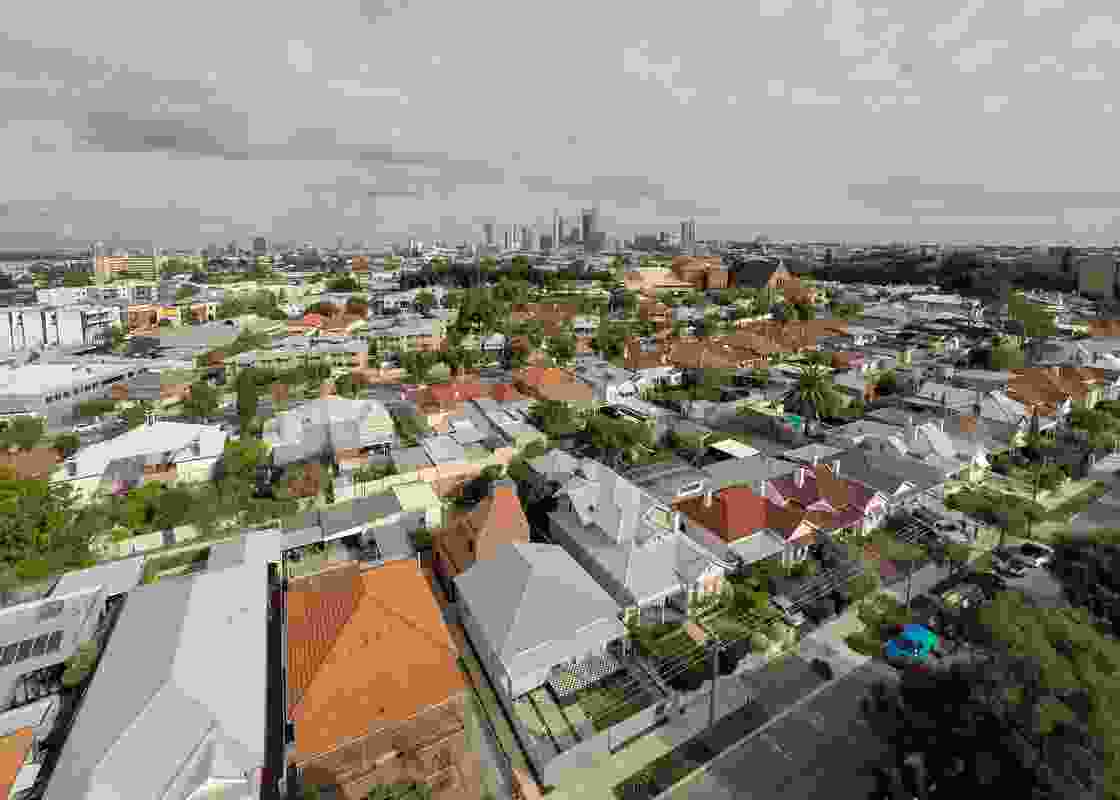 The extension to the house confidently mimics the surrounding roof forms, reworking the notion of a traditional chimney.