An inventive, restrained reworking of form, space and landscape by Twohill and James enhances the qualities of this old timber cottage, long-loved by a couple, their children and two canine companions.

Interior spaces are redefined alongside terraces, courts and gardens, resulting in a warm and unpretentious home.

Camp Hill House began as a modest interwar cottage located in Camp Hill, six kilometres south-east of the centre of Brisbane. The existing dwelling had a typical closely packed floor plan: living space to the south, flanked by bedrooms and a sleep-out to the north. Despite occupying a large block, the cottage had little direct connection to the outdoors, except for a small verandah on the south-west corner and a run of stairs from the rear of the house down to the backyard.

The clients, a couple with two children, had purchased the cottage as their first home together back in 1993. With their children growing older and lifestyle preferences evolving, there was a need to expand the space to achieve differentiation, distance and independence while also making the most of precious shared time, including with the mother of one of the clients, who now lives next door. Fortified by longstanding attachment to the place, the owners sought to find their solution within the dwelling they knew and loved.

Through an architect friend, the owners were introduced to the practice of David Twohill and Emma James. As the conversation flowed about how to meet the family’s requirements, a connection between owners and architects blossomed. “It’s a relationship,” observes the client, “and you can’t do it any other way.” As a filmmaker, he understands the creative process. “You engage an architect because they bring qualities of understanding to the process and I am passionate about letting them do their thing.” The clients desired a warm and unpretentious home to enjoy together, so the architects’ placemaking was informed by the simple pleasures of the existing house, this included the favourable orientation to the back garden and the old back stairs, which acted as a treasured sun-warmed perch for morning coffees and conversation. Radiating from this harmonious spot, a design took shape as a series of interdependent new and redefined interior spaces and complementary landscape elements of formalized terraces, courts and gardens.

The architects worked within the existing cottage footprint to gain as much space as possible. They also determined not to raise or lower the house, as to do so “would have broken the memory of the place,” says Emma. Taking advantage of a fall of roughly two and a half metres from the south-east corner at the back boundary to the north-west corner at the front, the architects built space beneath the house for a third bedroom and a home studio.

Cooking and sharing food is a vital element of the family’s life, and a new kitchen became the focus of “a very economical diagram.” Set hard against the southern boundary, the compact extension judiciously connects with the body of the cottage to enfold a garden terrace. It also acts as the house’s new entry point, serving as a “deep but poised” focal point when transitioning from street to interior. This elongated sequence passes a frangipani court on a slowly rising path to a terracotta entry plinth. There is also the option to step off this axis to directly enter the filmmaker’s studio, which enjoys as its threshold a small sunken court beneath a delicate trellis of variegated jasmine.

Crossing the threshold into the new kitchen, views of the garden and pool beyond appear over the lowered frame of a window seat. Oblique views out to the terrace invite casual transition to the outdoors, while to the north-west, five steps lead up to the long, open living and dining room, which subsumes the original verandah. Room-width terracotta steps connecting back down to the garden terrace act as a miniature amphitheatre, reifying the memory of the back stair perch. The elegant metal trellis that shades the patio will eventually grow in as a green enclosure, perceptually elongating the interior even more.

Pocketed beyond the long room, an internal stair connects to the private space downstairs where the parents’ bedroom and ensuite enjoy access to a secluded garden set below the kitchen terrace and shielded by a thick stand of ginger and climbing vines. The modestly sized bedroom is suffused with luxurious ease, with sleeping and bathing areas divided only by a low joinery unit of walnut and red marble, and a deep threshold between inside and outside providing a place to sit and enjoy the private garden.

Against the refreshed white weatherboard and polished timber floors of the reborn cottage, materials and finishes were chosen to meld “special moments” into the daily life of the occupants. There’s the tactility of unglazed terracotta tile, the spare but memorable fashioning of red Pilbara marble, the warmth of the walnut cabinetry and the grounding simplicity of the burnished concrete.

This skilfully economical cottage transformation, offered up by the inventive architectural thinking of Twohill and James in response to the considered ambitions of the clients, richly shapes the next narrative of the family’s life in their much-loved home. 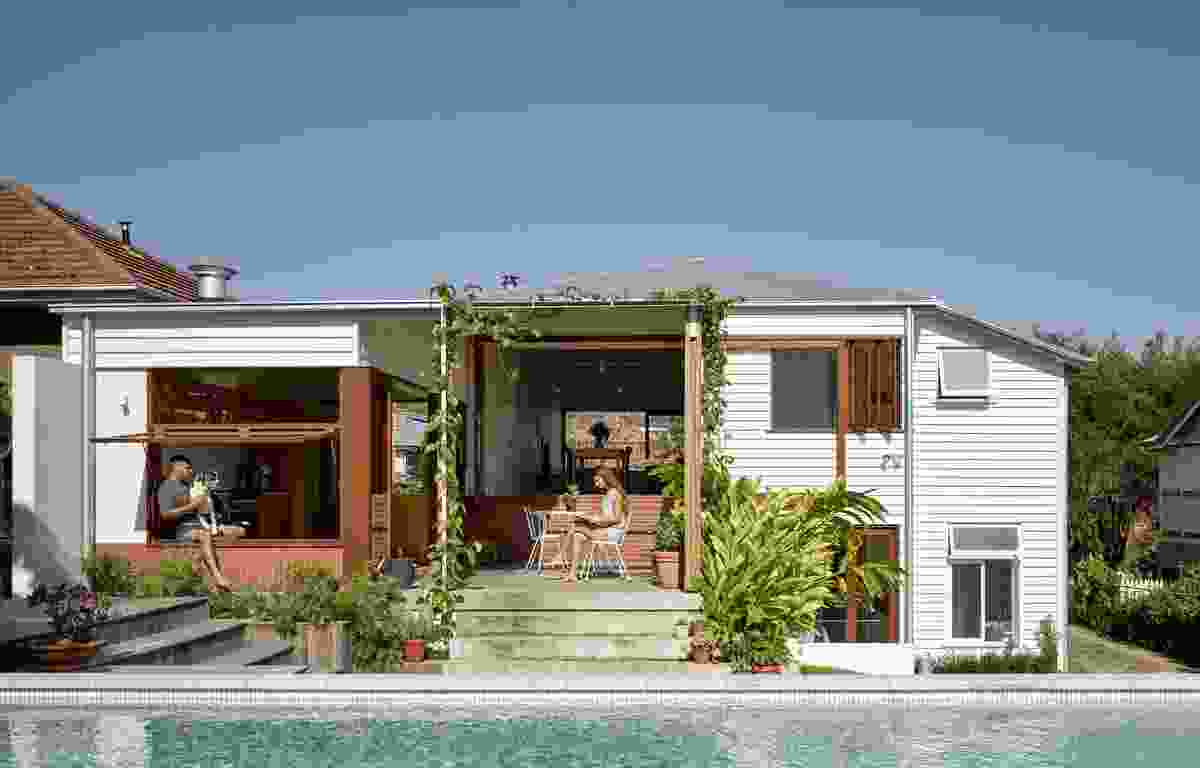 Interior spaces are redefined alongside terraces, courts and gardens, resulting in a warm and unpretentious home. 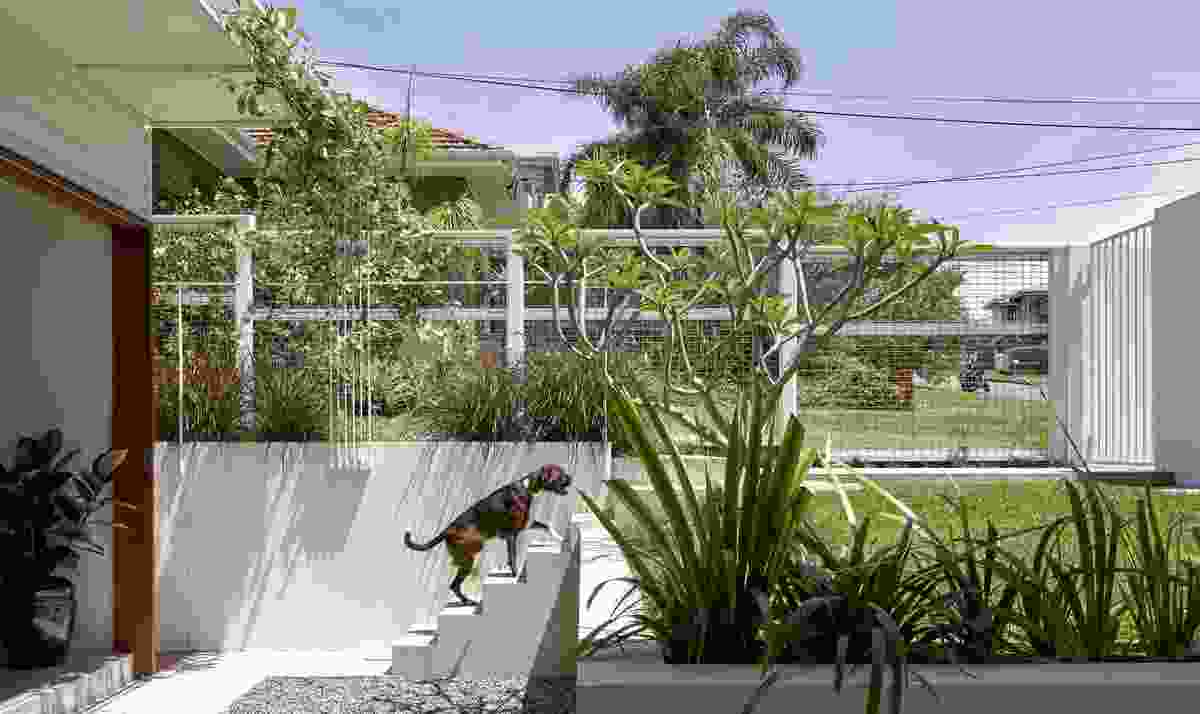 The decision not to raise or lower the cottage was one that honoured the clients’ attachment to and “memory of the place.” 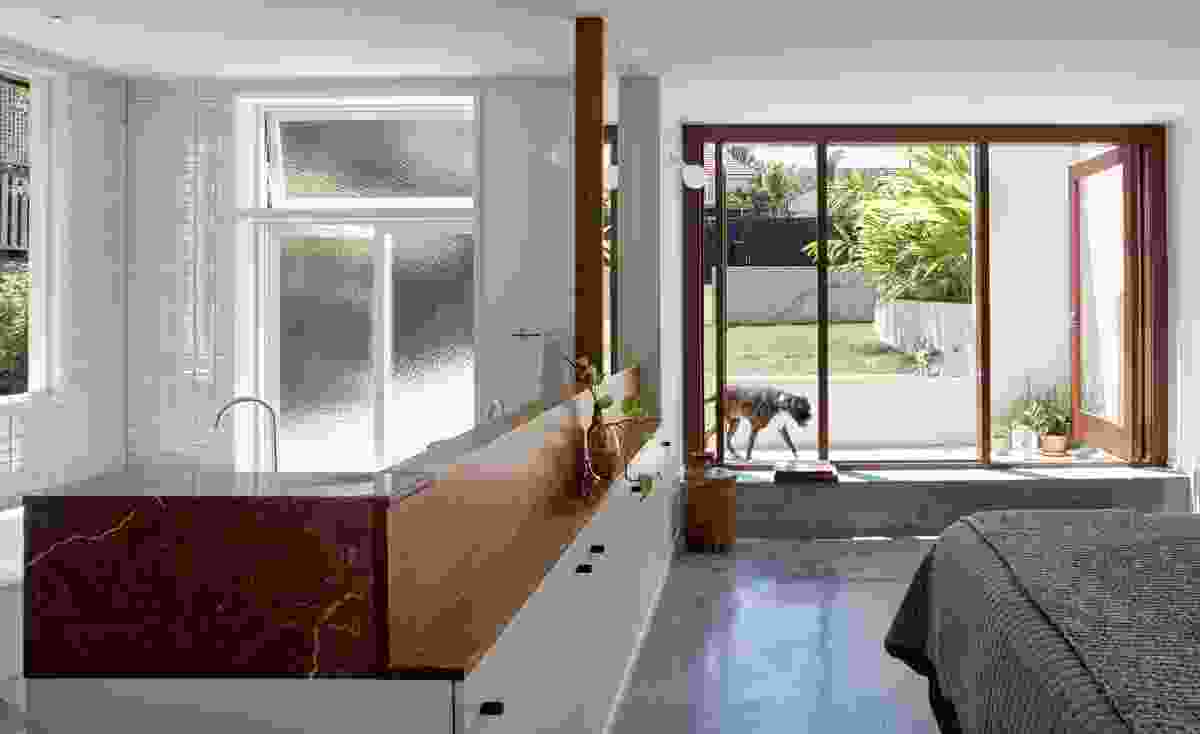 A low joinery unit of walnut and red Pilbara marble divides sleeping and bathing areas in the parents’ retreat. 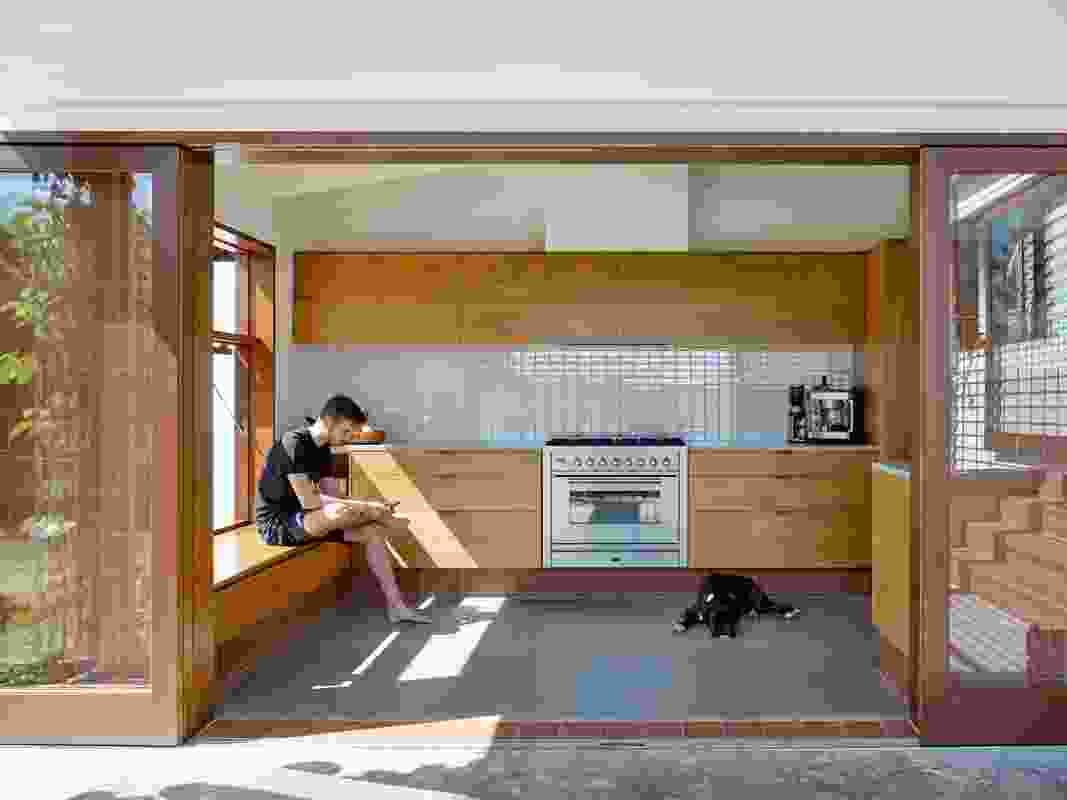 Taking advantage of a fall across the site, the architects built space beneath the house for a third bedroom and a home studio. 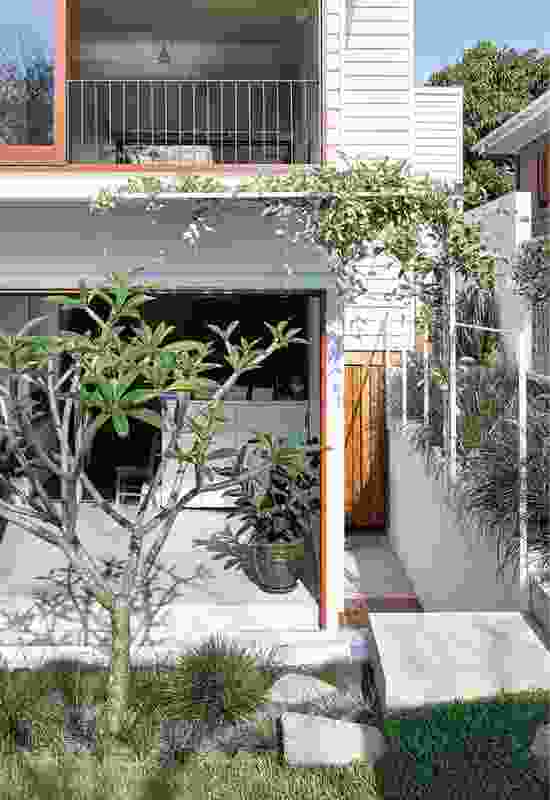 An elegant metal trellis, which will create a green enclosure as the vines grow, shades the terrace. 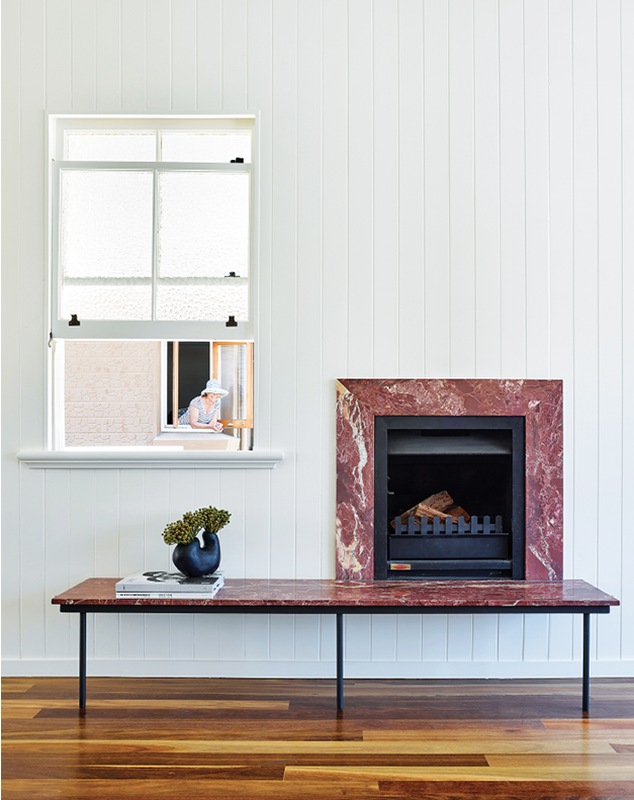 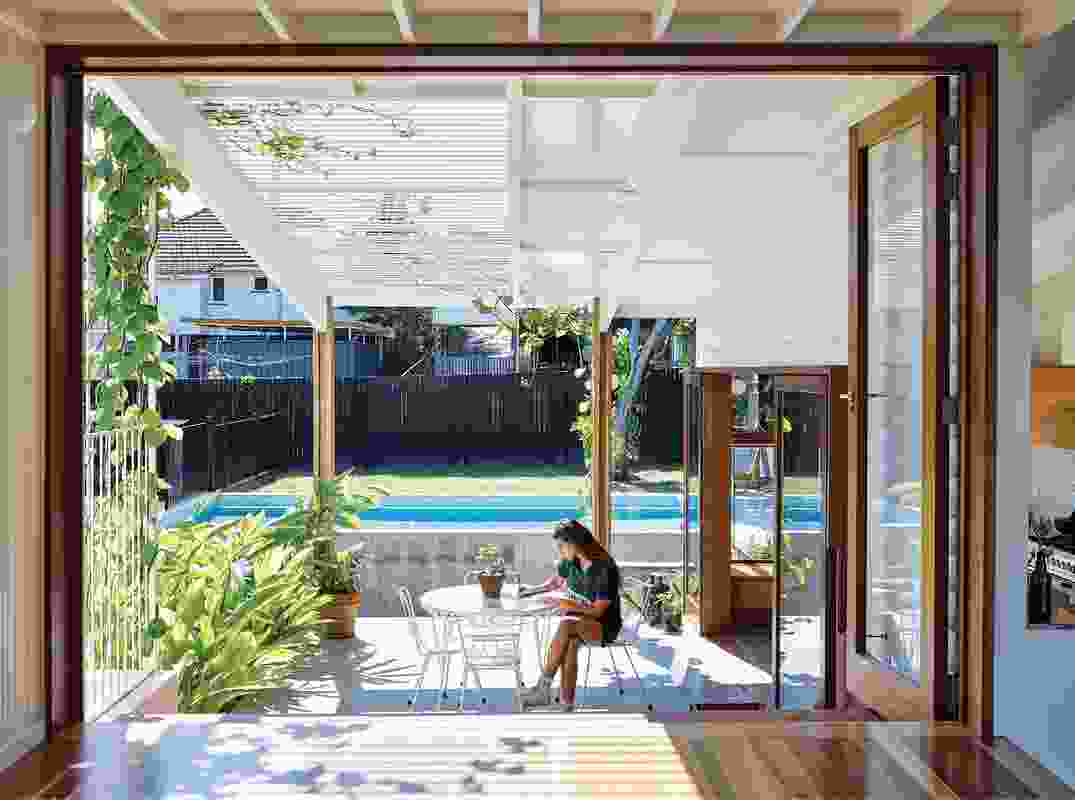 Terracotta steps at one end of the long, open living and dining room act as a miniature amphitheatre. 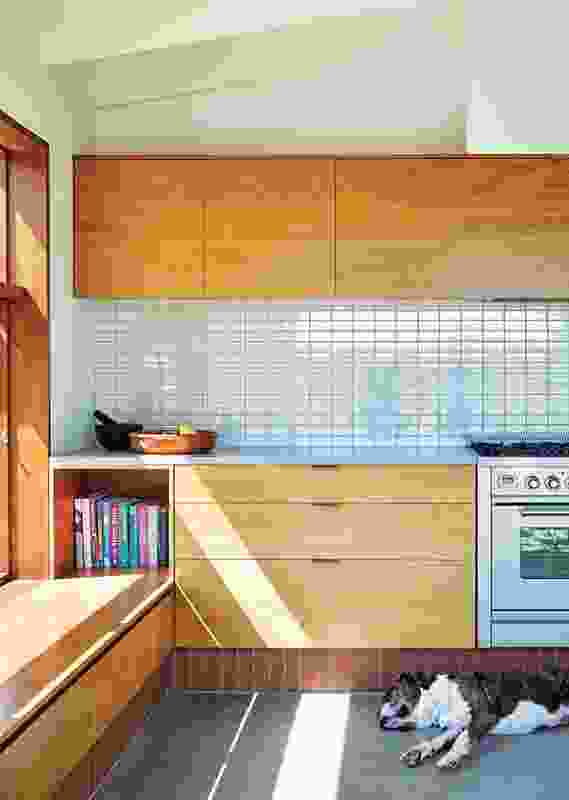 The focus of “a very economical diagram,” the new kitchen judiciously joins with the body of the cottage. 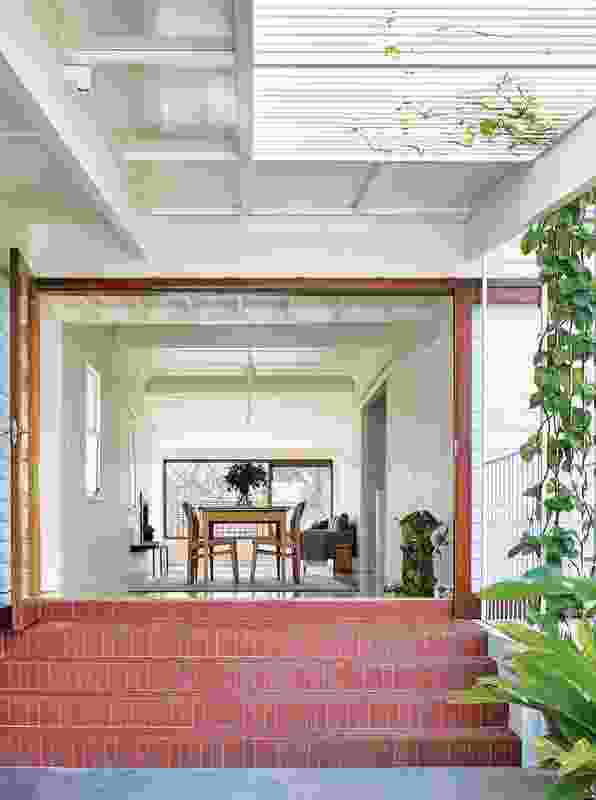 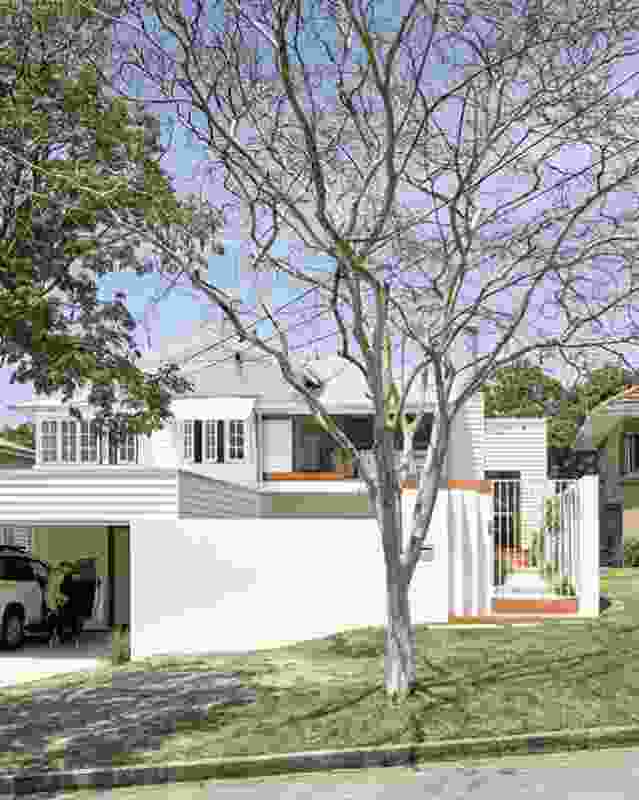