The 2018 MPavilion, designed by Estudio Carme Pinós, has opened in Melbourne’s Queen Victoria Gardens, marking the start of a four-month-long program of events.

The pavilion is the first public project by a female Spanish architect in Australia and the fifth in a series of annual architectural installations commissioned by the Naomi Milgrom Foundation, which began in 2014 and have been confirmed up to 2022.

Pinós said the design of the pavilion expresses her observations of the garden’s natural setting. On a visit to the site during the 2017 MPavilion season, she noticed a number of small grassy mounds that surround the site, as well as a number of circular formations in the park and the people who tended to congregate in circles.

“I want to enter in dialogue with the circle,” she said. The pavilion’s design includes three artificial mounds, which incorporate tiered seating. They also amplify the existing topography of the site. “These small mounds,” Pinós says as she points to those surround the pavilion, “seem like part of my intervention but they’re not.”

On top of the mounds rests two intersecting, folding planes, made from metal profiles with two layers of timber latticework, which create the effect of a brise soleil, says Pinós.

The folding planes are inspired by origami. “It’s so simple,” she said. “I made [a model of] the pavilion with paper on the plane back to Barcelona. But the effect is complex.”

Pinós also said the brief from the Naomi Milgrom Foundation called for a structure that would protect visitors from the rain. She responded with a design that emphasis the effect of the rain falling on the structure. “I wanted to play with the water, the light and the shadows,” she said.

A piece of polycarbonate sheeting between the timber lattice layers will allow visitors to experience the rain while staying dry. Two oversized gutters will channel the water to the two opposing mounds that support the structure.

“In my pavilion you are going to observe the rain, you are going to listen to the noise of the water on a rainy day. You are going to see the change of the light, the shadow moving, and at each moment, the pavilion is going to be different because it’s very sensitive to changes in nature,” she said.

Pinós, whose practice also engages in furniture design, has designed a specially commissioned stool for the pavilion, which is made in Spain from hand-tinted plywood.

“In designing this year’s MPavilion, I wanted firstly to make a space for the people of Melbourne to feel connected — to each other, to the city they live in, and to nature. We are all part of the world, and architecture can tell that story and provide a place for us to experience life together. I hope the MPavilion becomes a flow of knowledge and creativity this summer.”

Naomi Milgrom said, “Carme’s design for this MPavilion is bold with an underlying elegance. Rather than making a heroic statement, it opens the pavilion to the city. Carme has used her architecture as a catalyst. She has created a pavilion embracing relationships, intersections and encounters.”

The 2018 MPavilion will be open until 3 February 2019 and will be host to hundreds of free public events. See ArchitectureAU’s selection of architectural highlights for the season. 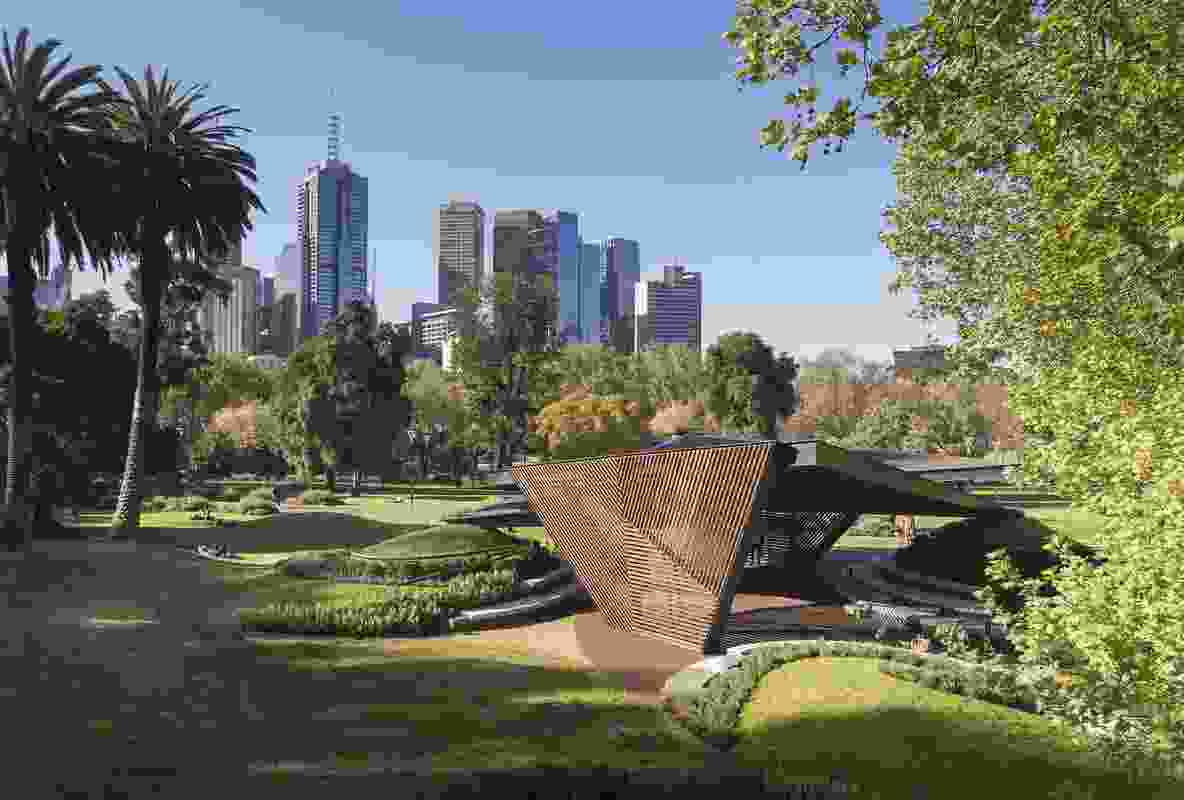 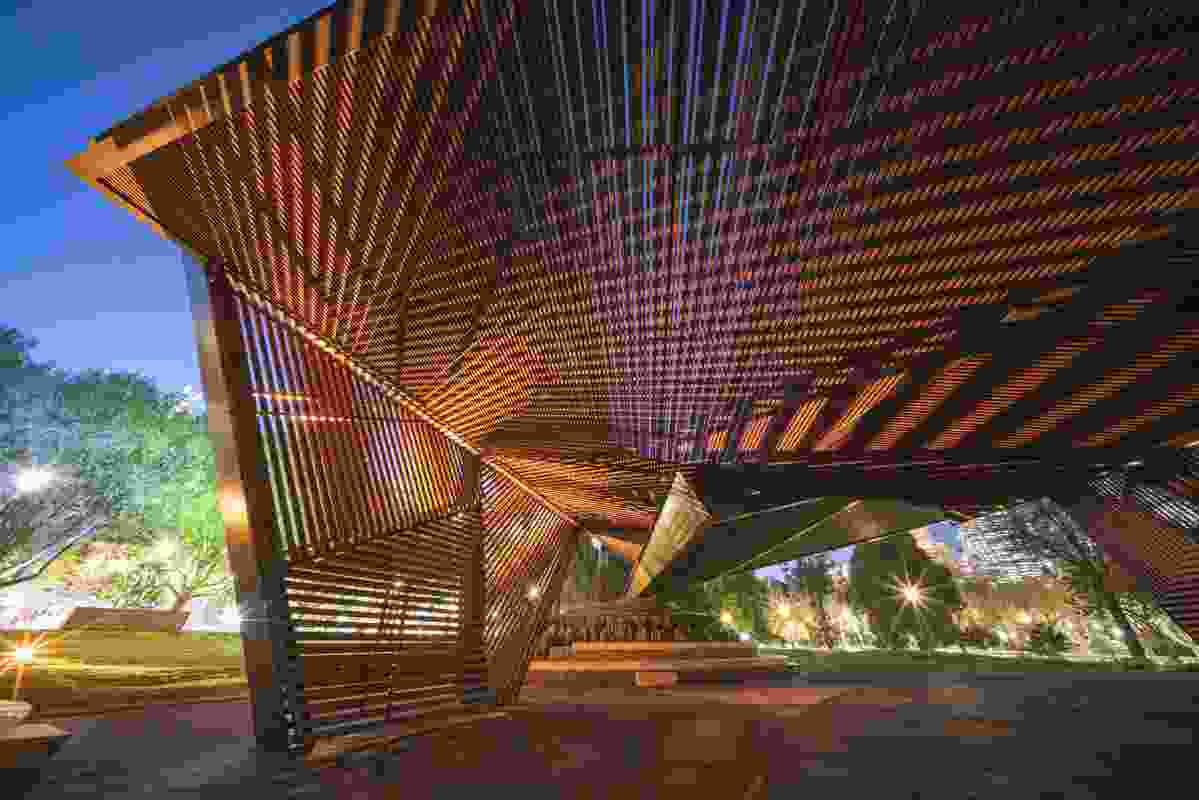 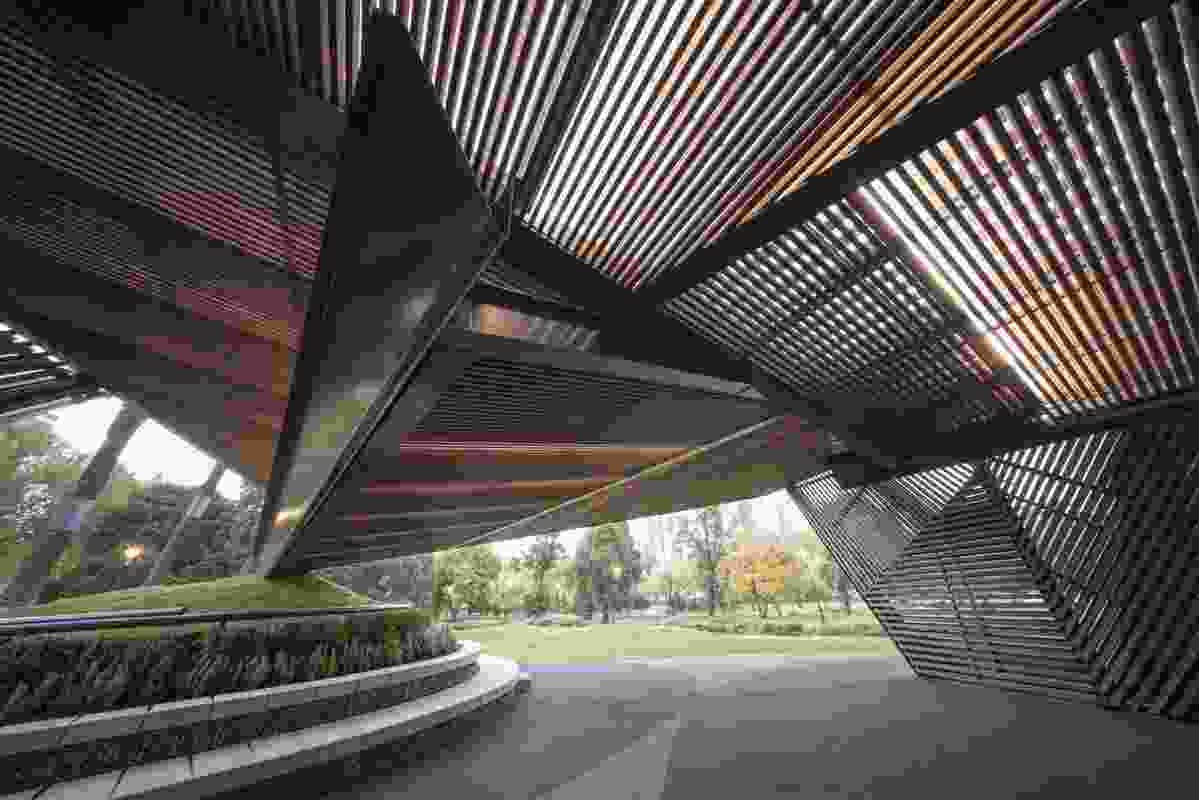 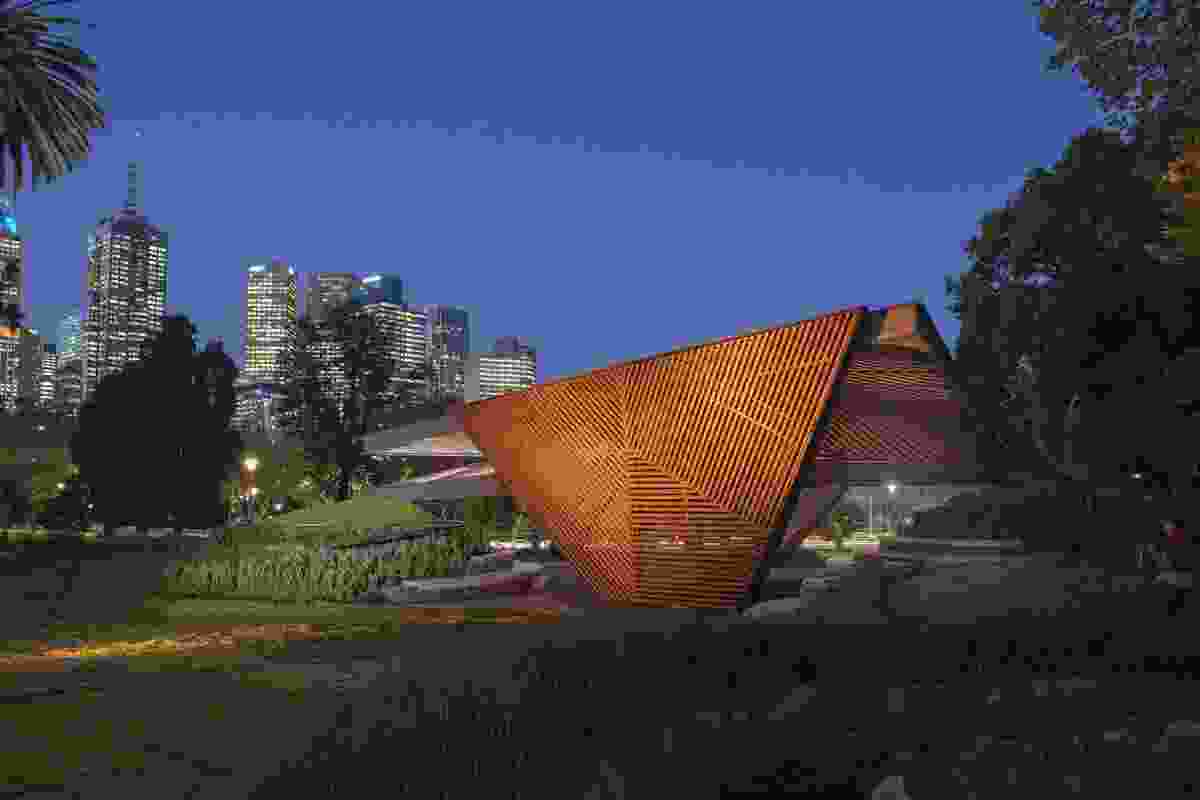 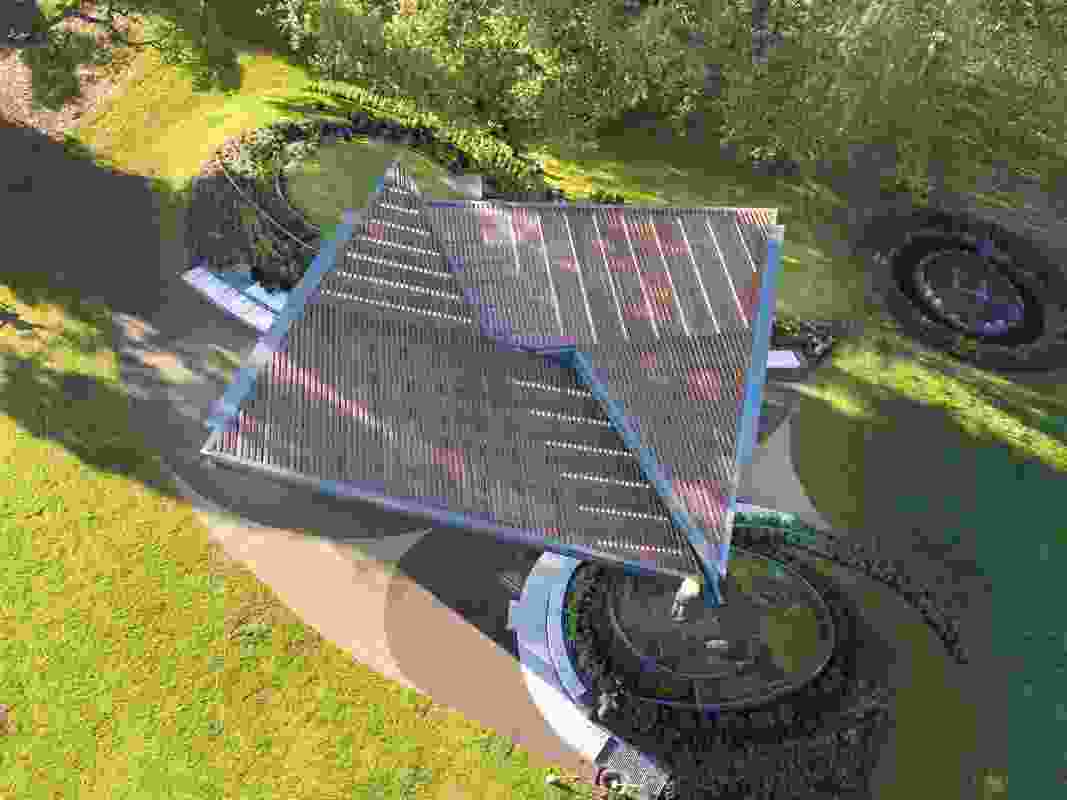 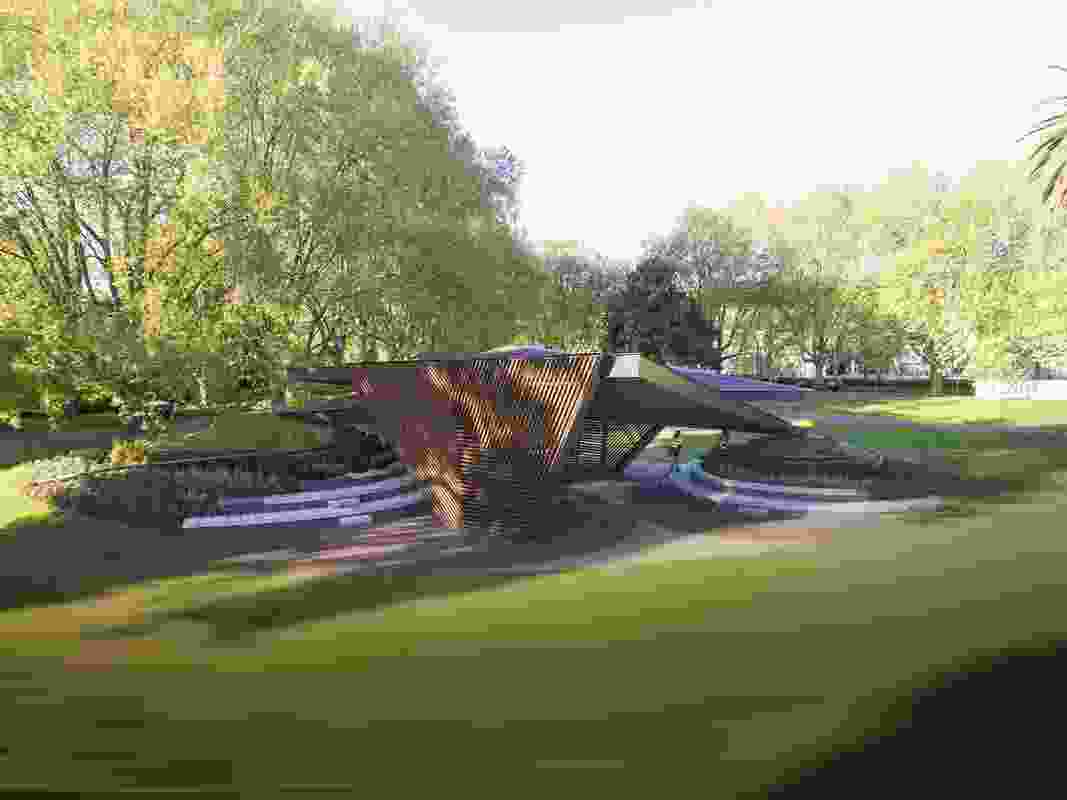