An ambitious new museum comprising a moody array of dark copper-clad buildings on the shores of Windermere lake in north-west England has opened to the public.

“The site had a wonderful series of views, but also was approached from all sides – you could arrive by ferry, by car or bus and also walk from Kendal, across the landscape.”

Pitched as a “working destination,” the museum repurposes a historic gravel-extraction plant, continuing the working life of the place while providing a reinterpretation of the site’s picturesque and industrial heritage.

“Our ambition is that the new museum will frame vivid experiences of the unique collection, the beautiful ecology and the natural landscape of its setting,” said Andy Groarke.

Windermere Jetty is one of the first buildings to be constructed on the shores of Windermere, in the heart of Lake District, in decades. The arts and heritage organization behind the project, Lakeland Arts, says it is committed to “conserving, saving and sharing” its collection of artefacts relating to industry and engineering.

Among the items on display is an “internationally significant” boat collection, including steam launches, motorboats, yachts and other vessels, with displays telling the stories of their construction and use on the lake.

Carmody Groarke was appointed to design the museum in 2011 following a competition. Speaking about the project in Melbourne in 2018, Kevin Carmody discussed how, right from the beginning of the design process, they thought the brief for a 3,500-square-metre museum right on the lake foreshore was too large for the site.

“Our intuition was to do a series of buildings – not one – somehow interconnected. The site had a wonderful series of views, but also was approached from all sides – you could arrive by ferry, by car or bus and also walk from Bowness, across the landscape.

“The building doesn’t have a back or a front […] and I think we had to come to terms with that as we were designing it.

Another source of inspiration was Windermere’s status as the wettest place in the UK. “We thought a boat museum, a museum showing historic steam boats on water, should allow people to be outside and understand that landscape and experience it both inside and outside.”

Their response was to use carved forms to make rooms, with overhanging canopies extending the inside spaces of the buildings into the landscape.

Each individual building is organized with a large principal room centrally orientated to face the lakeshore, with ancillary spaces and the external canopy spaces balancing each side of the symmetrical sectional composition.

The oxidized copper cladding was used material to give architectural consistency to the disparate elements, so that the museum buildings work together as a cohesive whole. The copper is folded and pinned with a regular pattern of brass fixings, giving the buildings their unique texture, which will only be further reinforced as they weather over time.

The Windermere Jetty Museum of Boats, Steam and Stories was officially opened by Prince Charles on 9 April. It will be open all year round, regardless of the weather.

The landscape design was led by Jonathan Cook Landscape Architecture and Real Studios was in charge of exhibition design. 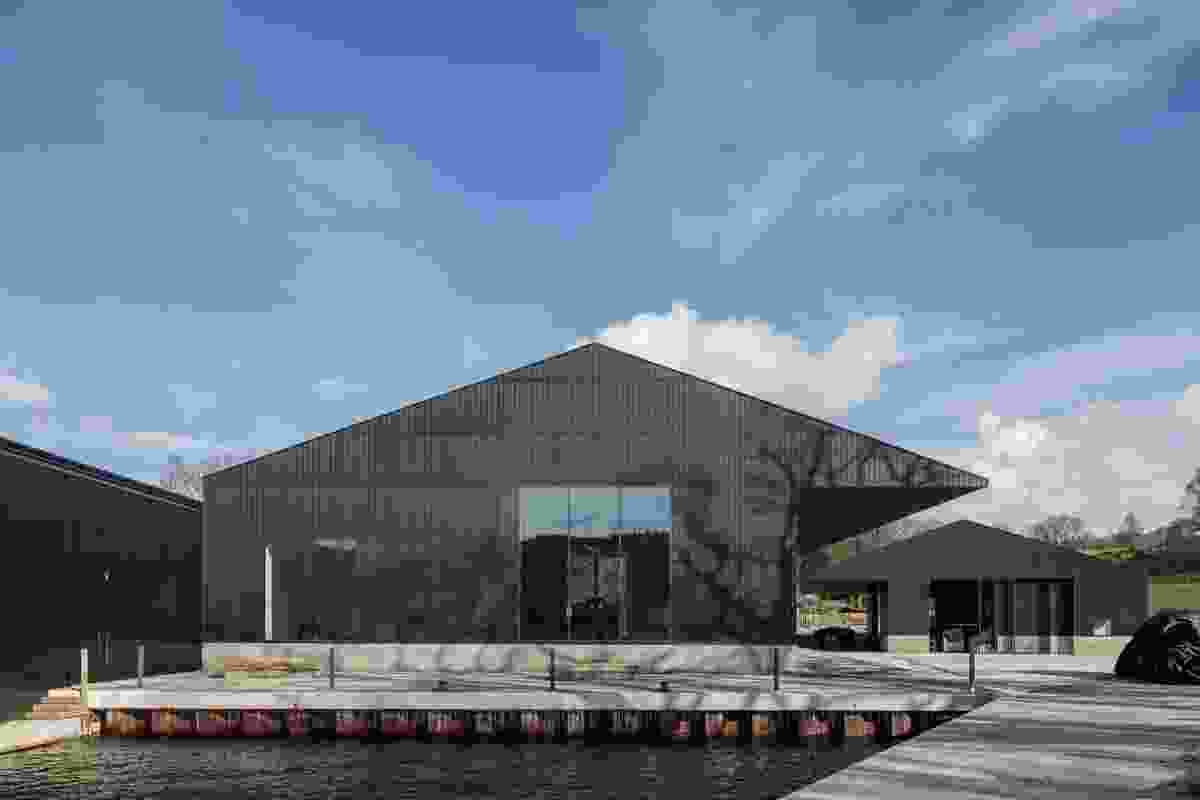 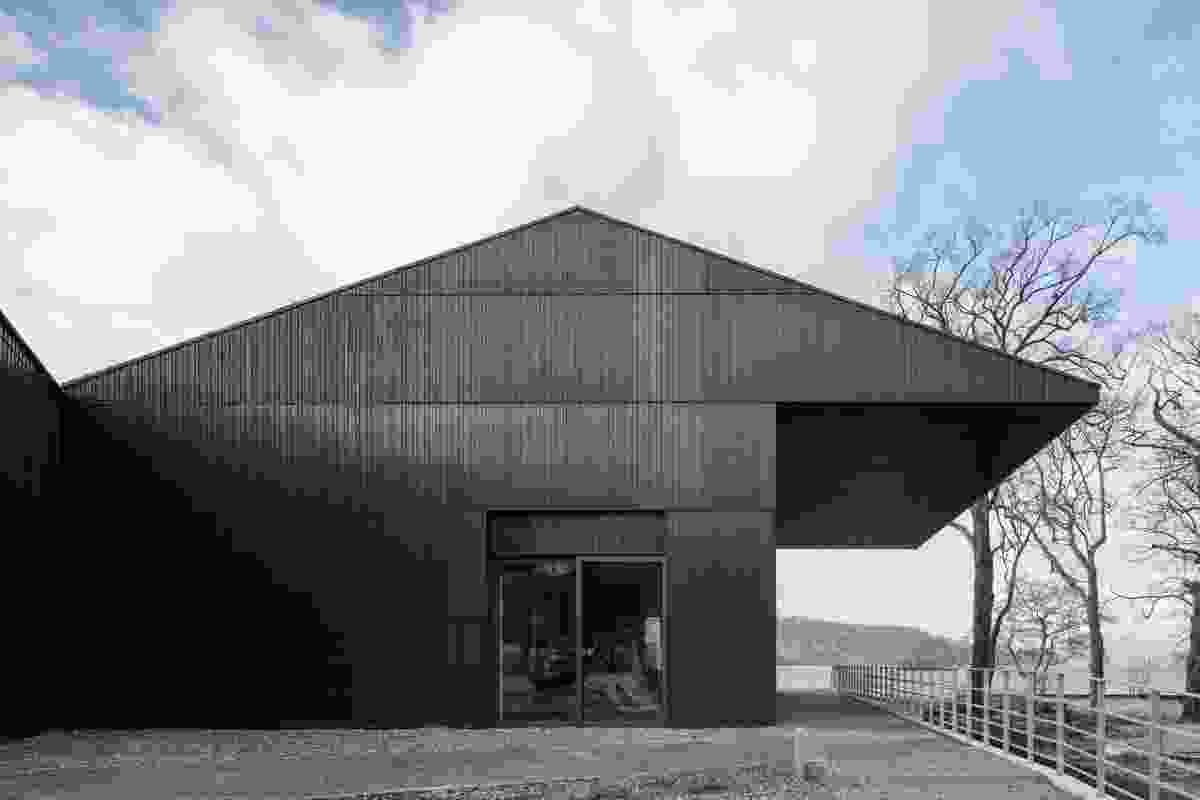 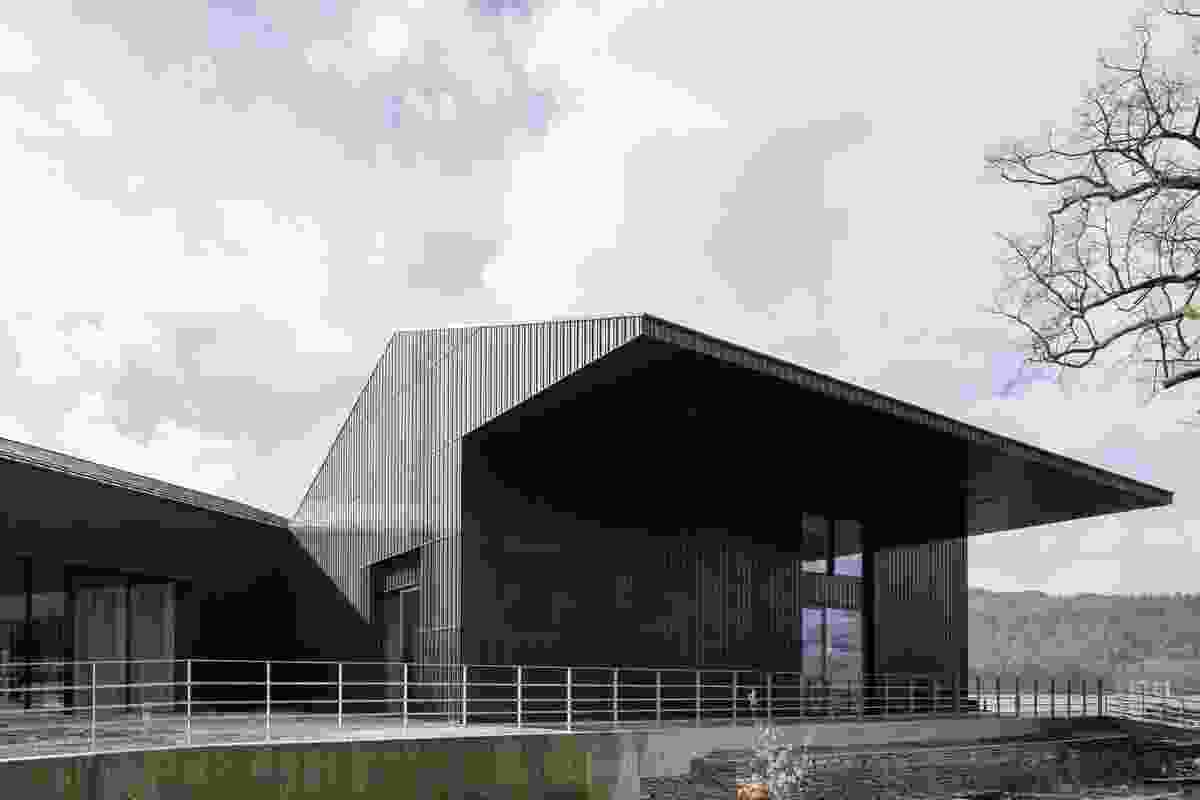 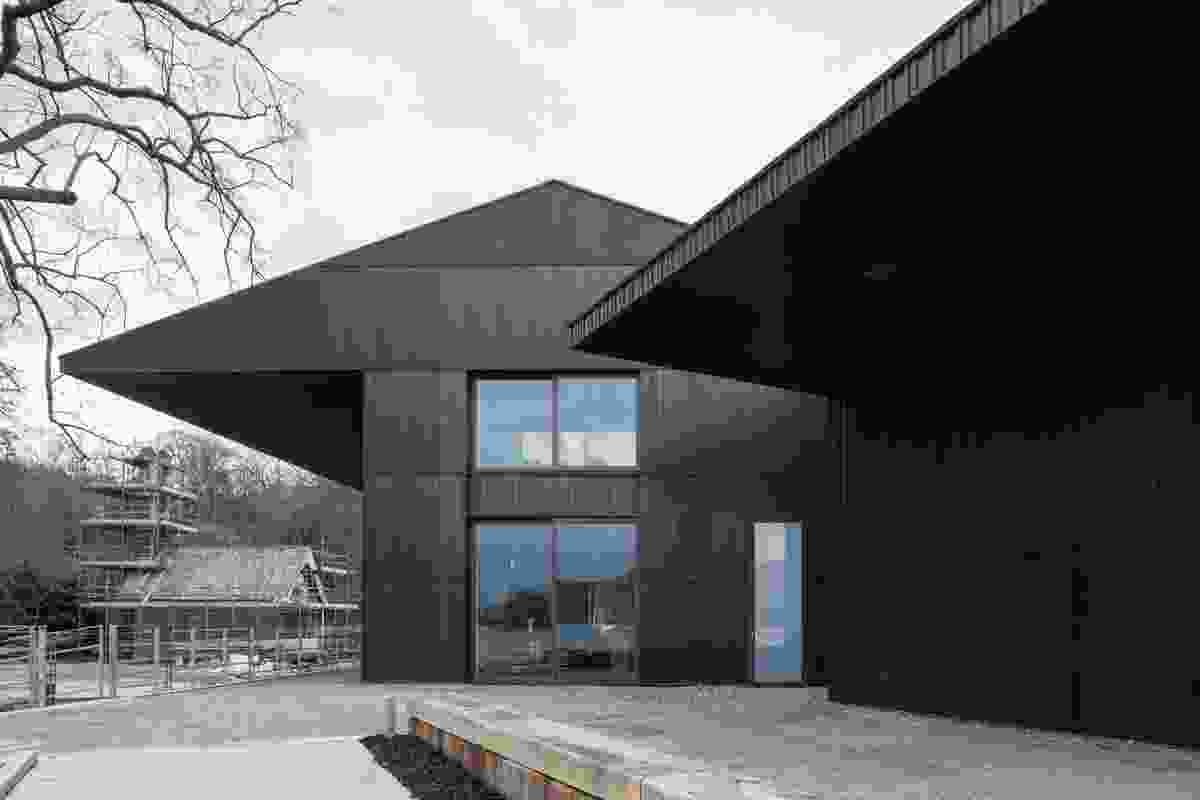 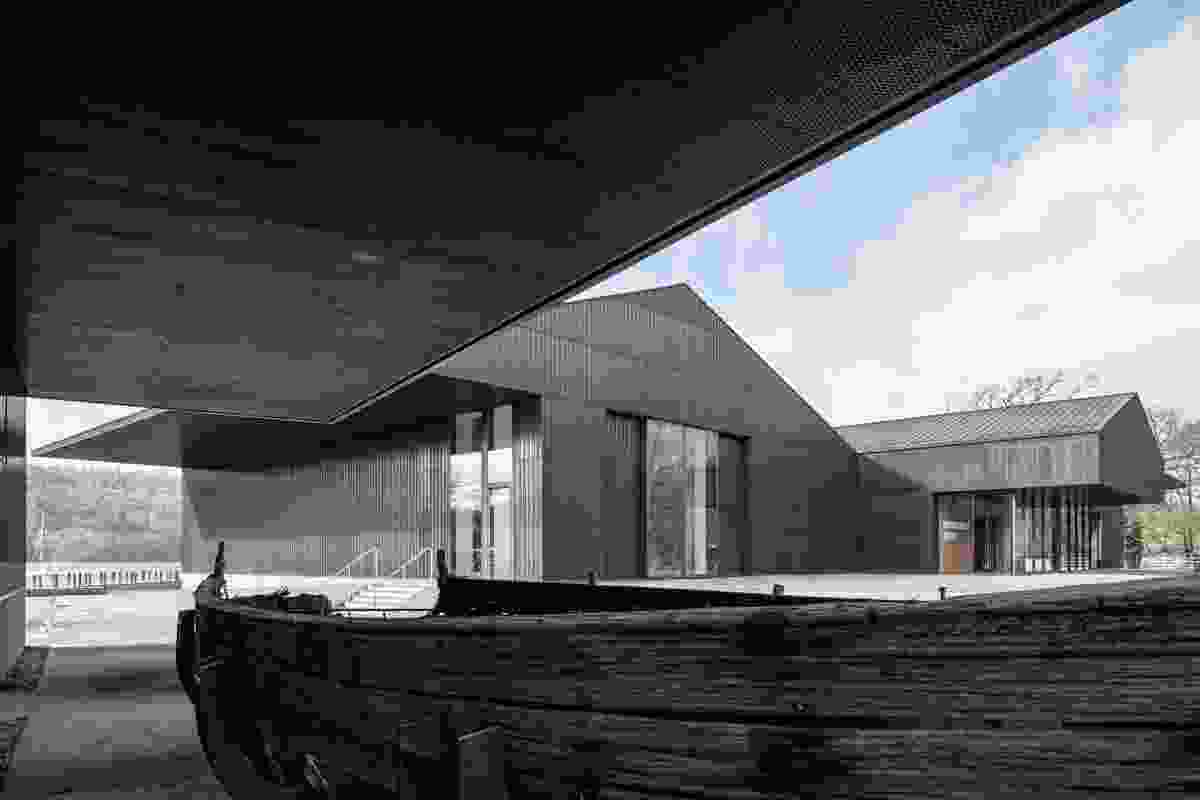 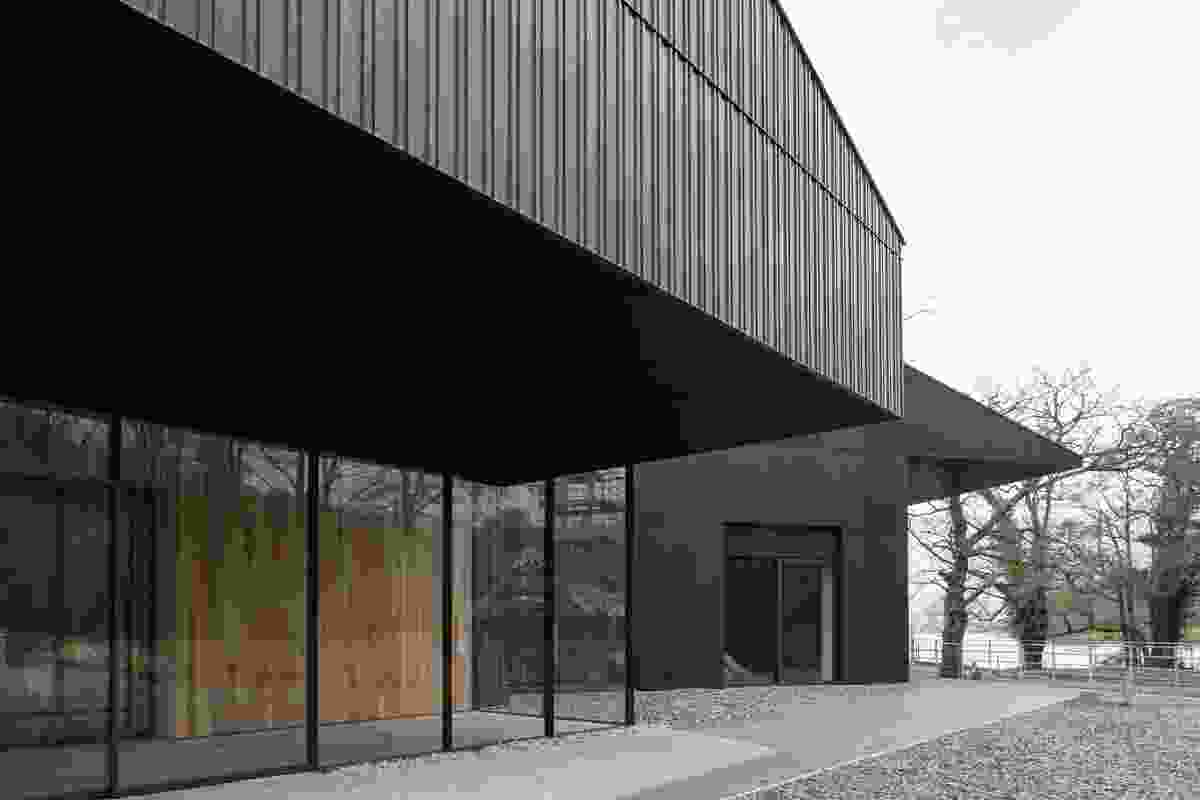 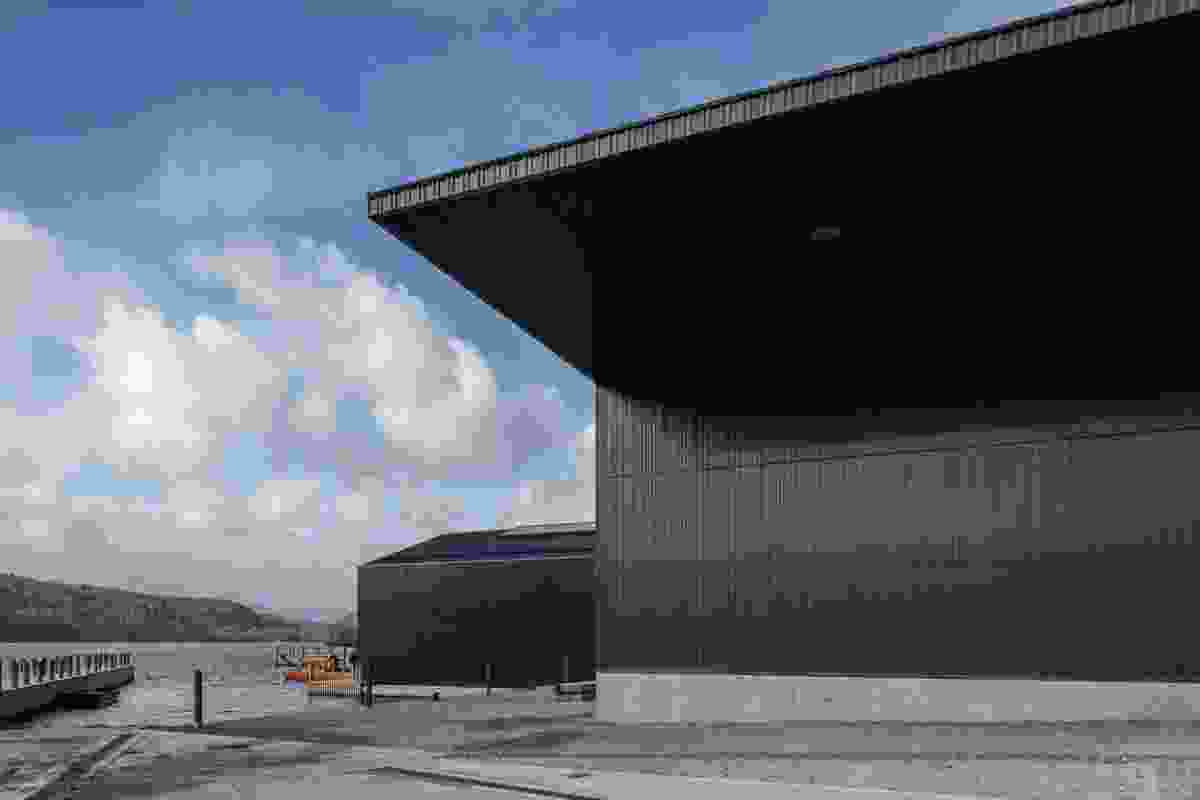 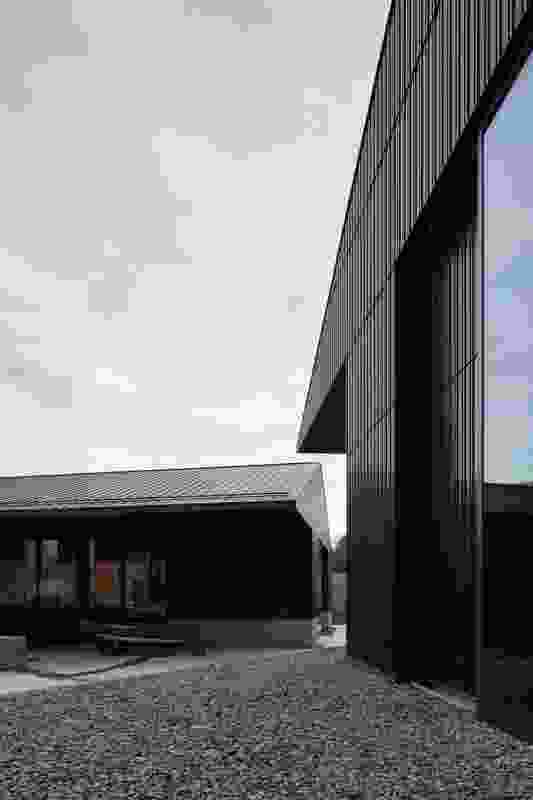 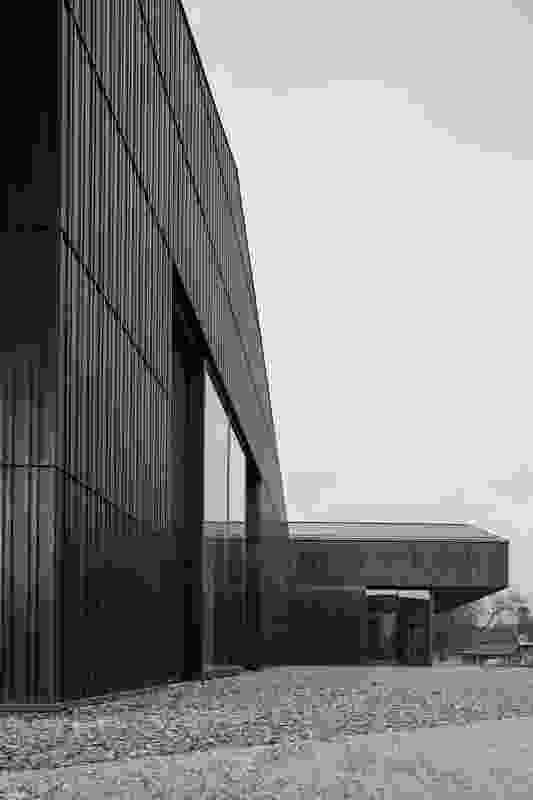 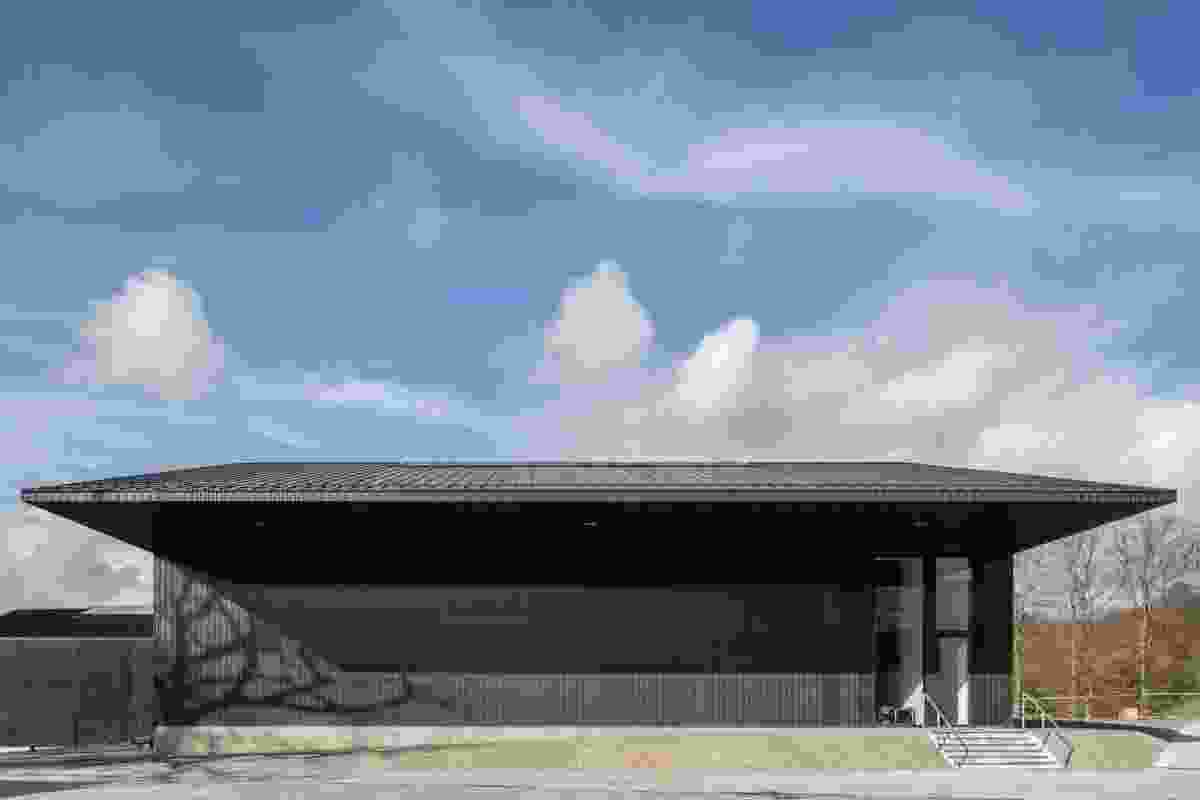 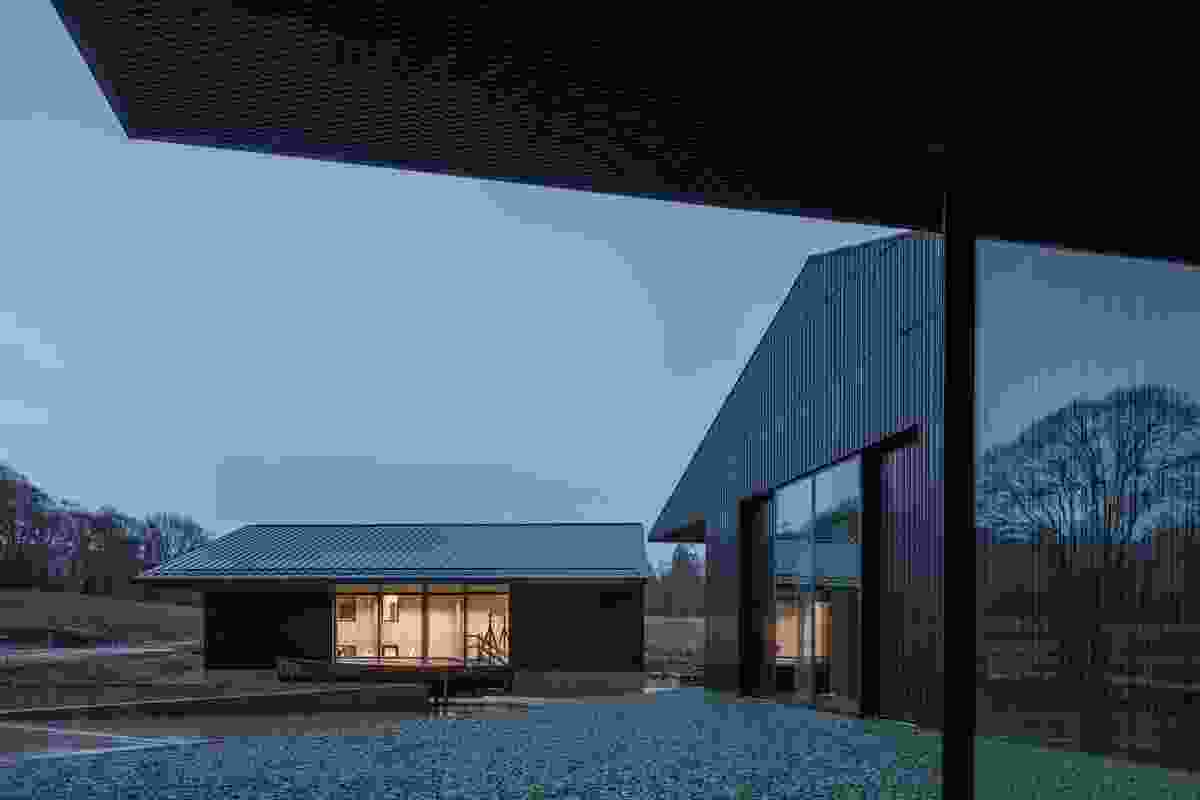 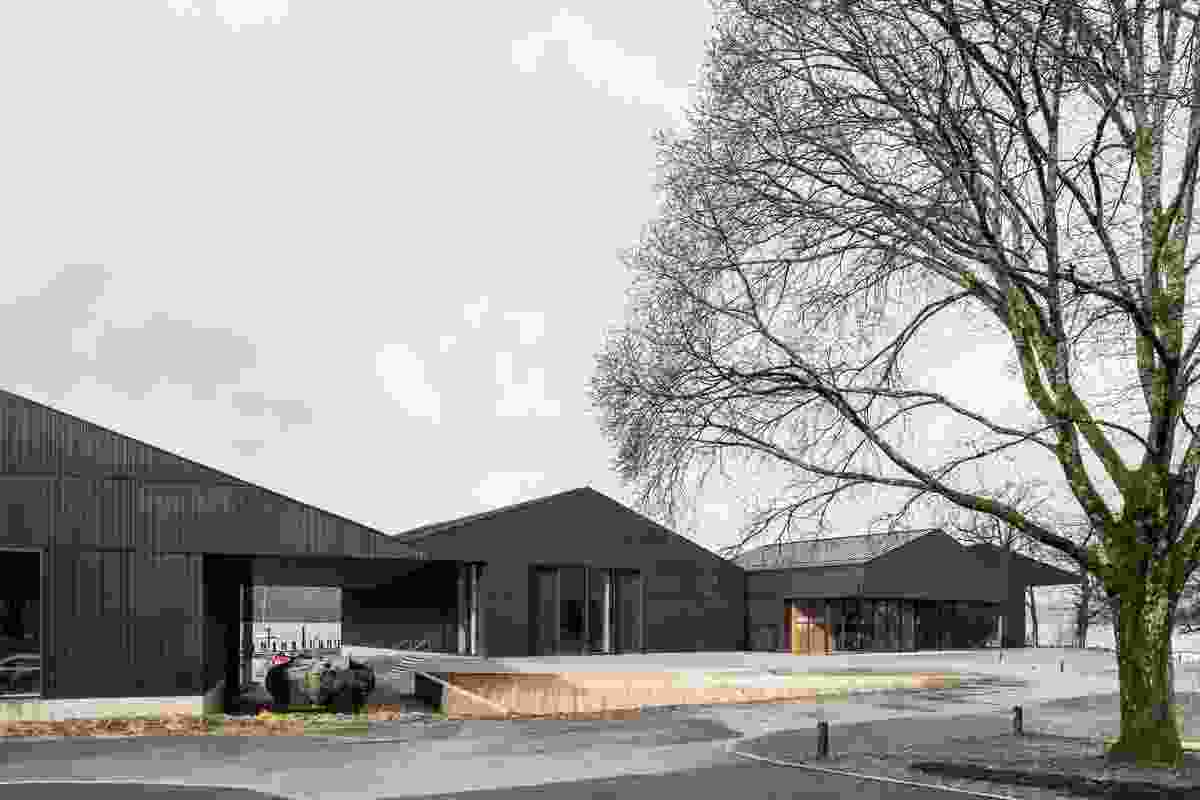 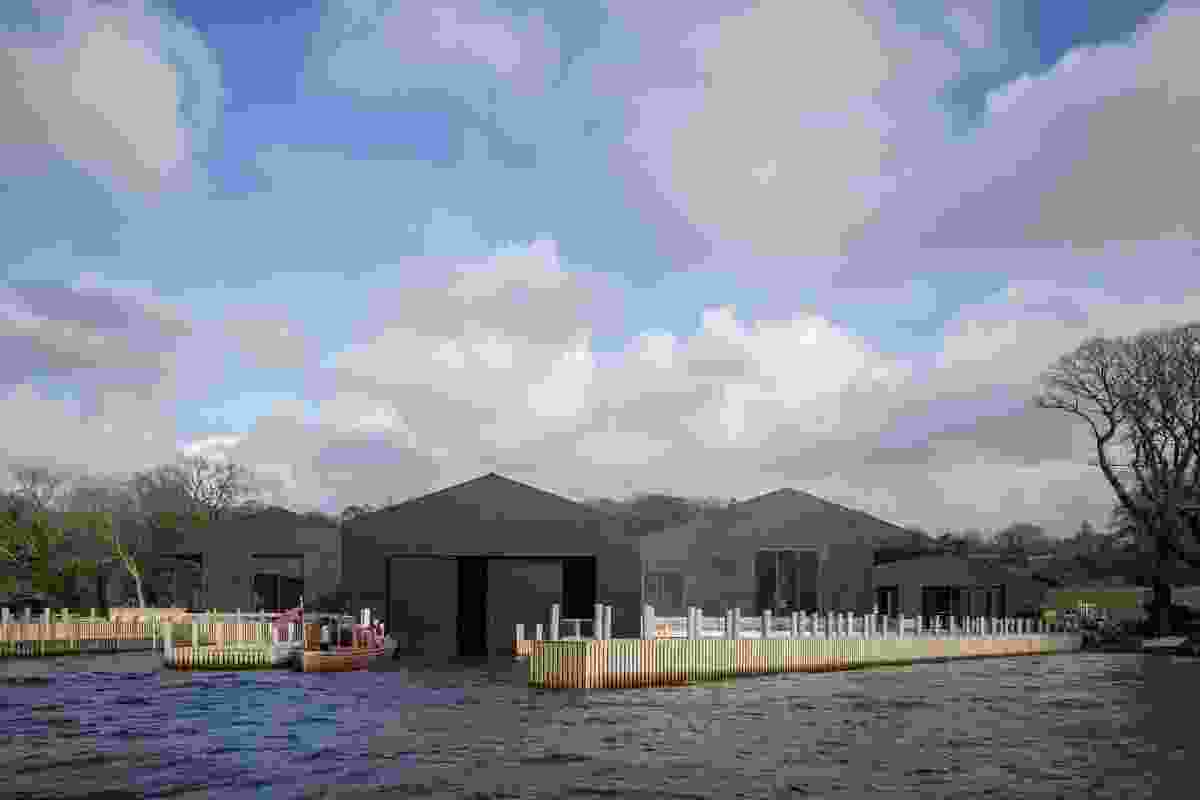 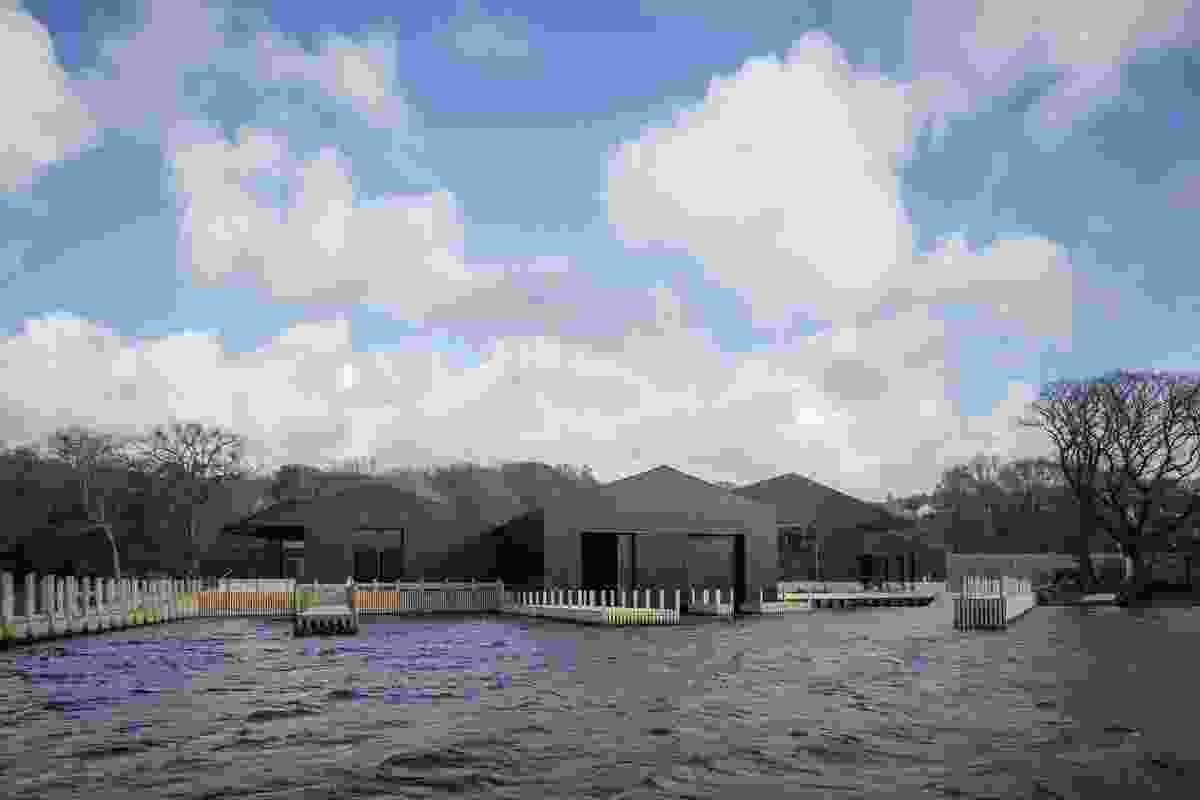 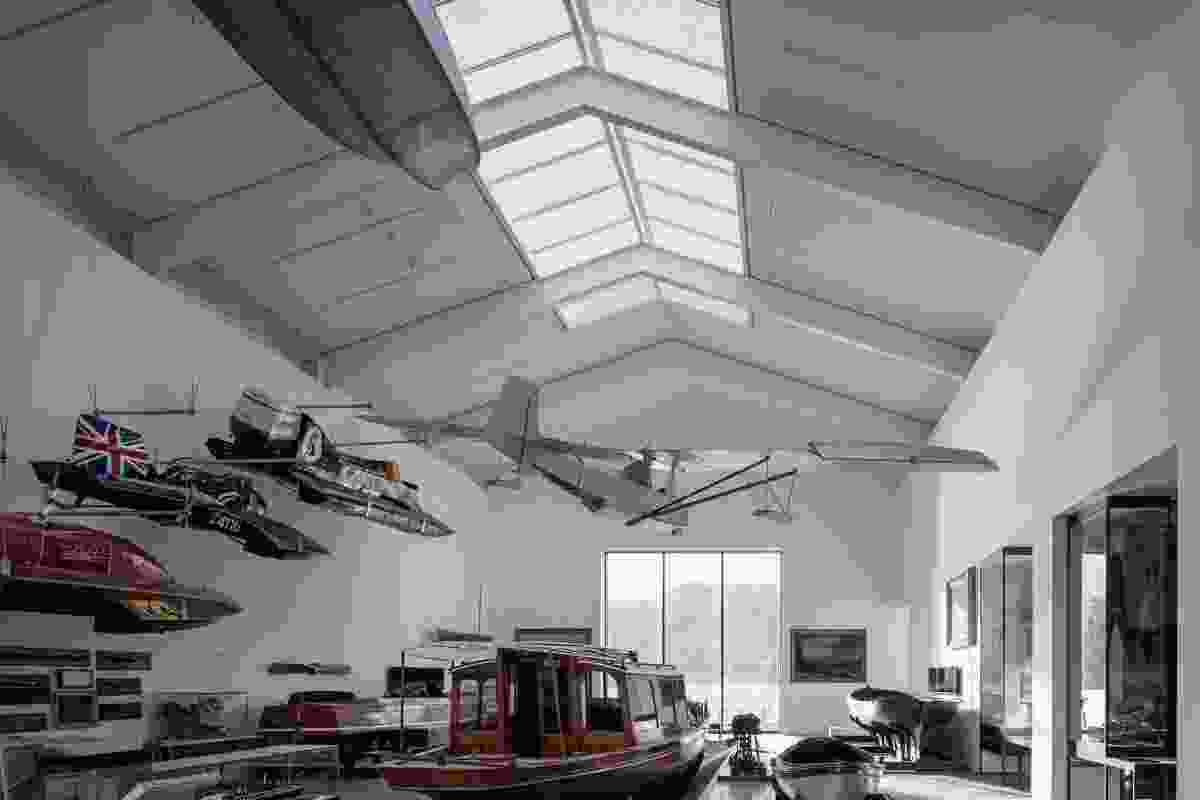 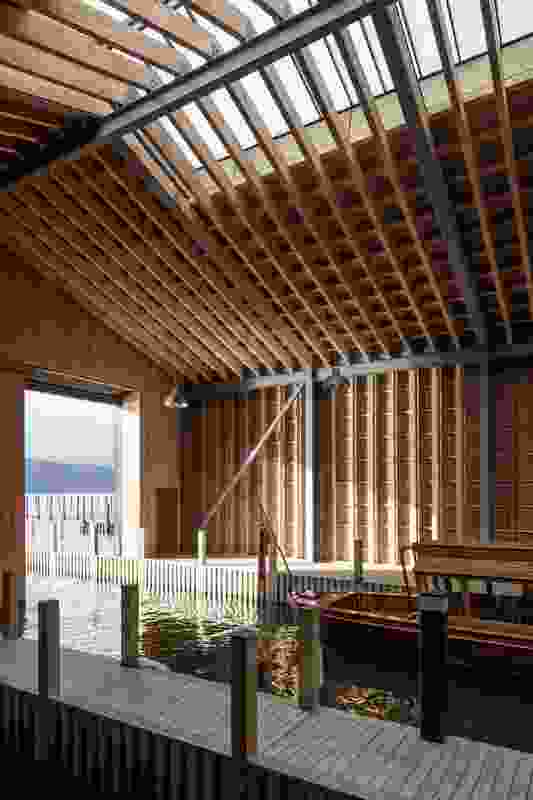 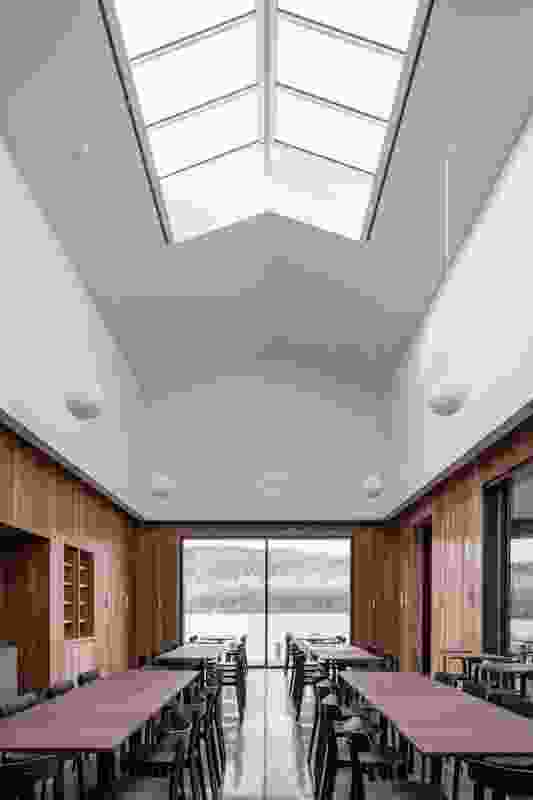 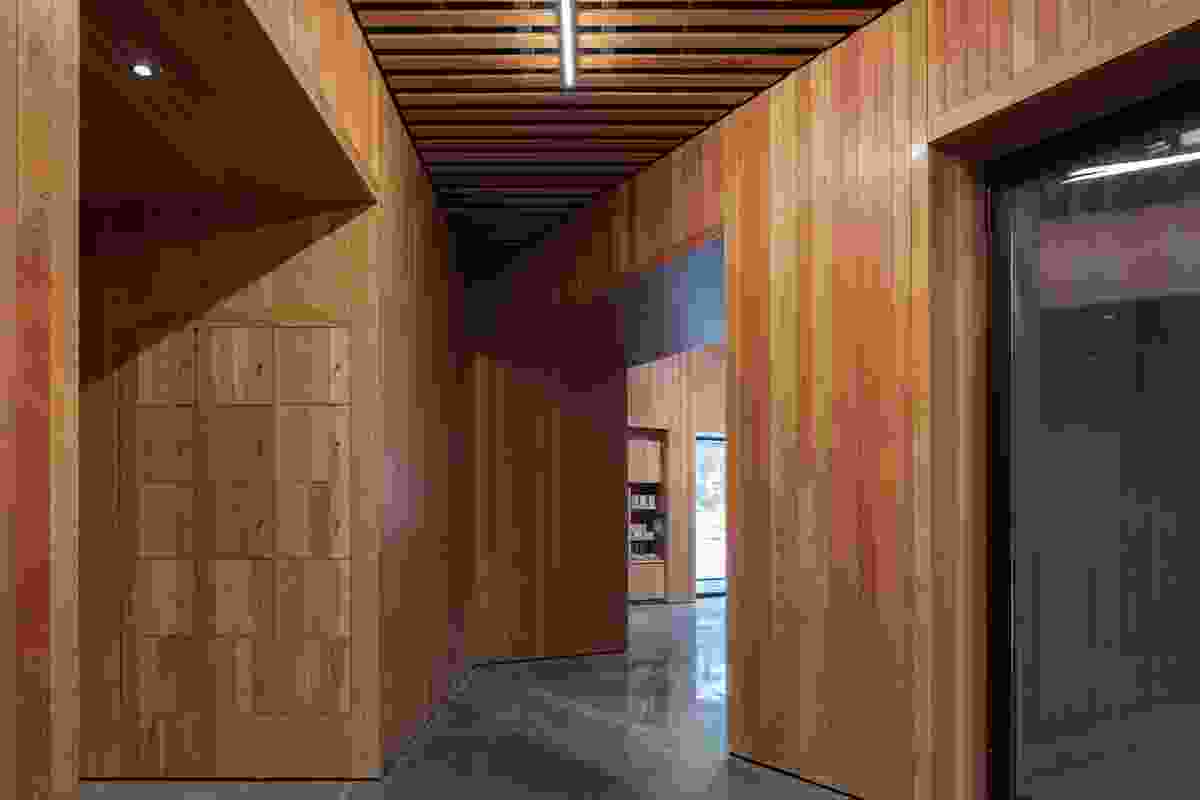 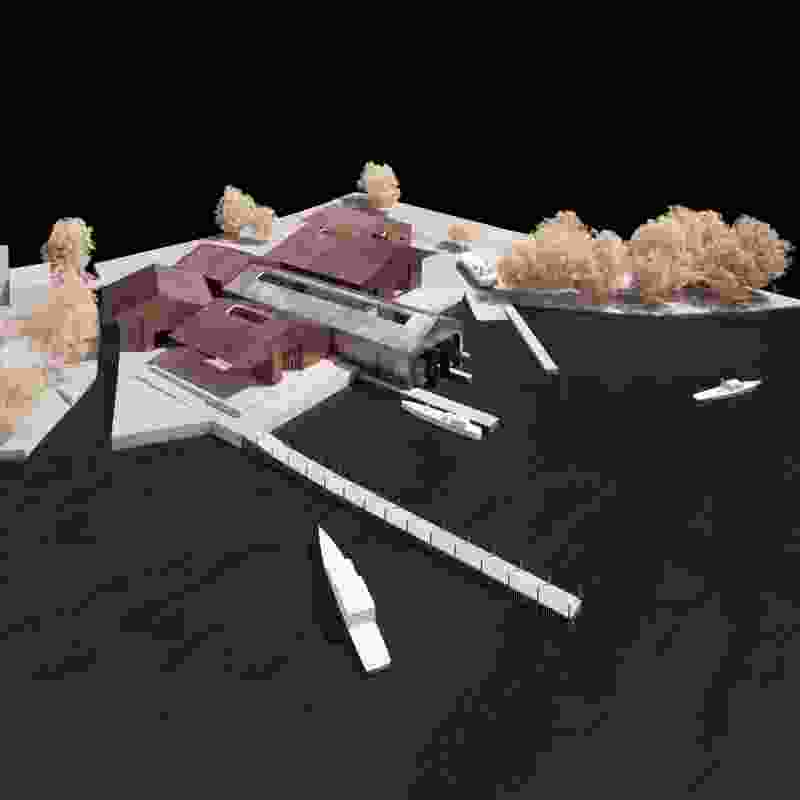 A model of Windermere Jetty Museum of Boats, Steam and Stories, designed by Carmody Groarke.