In the Canberra suburb of Red Hill, this house by Russell Jack exemplifies the Sydney Regional style. Nearly 50 years on, it’s as fresh and relevant as ever.

Arrival to the Cater house. A 1965 newspaper described the house as “masked” and “introverted,” referring to the white wall screening the front of the house.

Red Hill is one of Canberra’s early “dress circle” suburbs and its Mugga Way is locally called the “Golden Mile.” When Mick and Barbara Cater purchased a 1,400-square-metre block of land near the end of Mugga Way in the mid 1960s, the view over Canberra was very different from today. Canberra’s underlying governmental, civic and residential structure was by then well established, but its suburban areas were only beginning to experience the population increases and building density of future decades. The site looked out over a sparsely developed landscape toward Mount Ainslie and the airport. In the valley below Mugga Way, the sometimes flood-prone Molonglo River was being transformed into the sparkling artificial Lake Burley Griffin.

The Caters commissioned Russell Jack of John Allen and Russell C. Jack Architects to design a house that would take advantage of the sweeping view, offer privacy from the street and neighbours and provide accommodation for the young family and their guests. The brief required separate living and dining areas, four bedrooms, a guest room, kitchen, laundry, tool room, two bathrooms, parking and outdoor areas. Russell’s fine drawings detail the project’s development into a house as satisfying today as in 1965.

In contrast to the common practice of domestic display, the Cater house reveals little to the passer-by, presenting an almost reticent face to the street. The front door and carport are effectively screened from view, both entered at ninety degrees to the street. The white front walls of the house and carport are punctuated by a single slit window and an opening leading to the entry porch. Newspaper articles in 1965 described the house as “masked” and “introverted” under the heading “Award-winning house wins medallion,” a seemingly ambivalent reception for this clearly contemporary architecture.

The building hugs the ground, anchored by layered walls stepping down the slope away from Mugga Way under a single skillion roof. Mature eucalyptus trees and Australian native plants emphasize the planar structure of the house. The material palette is restrained, including load-bearing brick walls bagged and painted white inside and out, white painted plasterboard ceilings and oiled Queensland blackwood joinery, along with carpeted, brick and polished timber floors. The house is composed of a suite of three pavilions wrapped around inner walled courtyards on the western and eastern sides, opening at the back onto a generous veranda with sweeping views across Canberra.

Russell’s spatial sequencing is carefully orchestrated, with clear separation of the internal public and private areas. To the left of a small, brick-floored entry foyer is the guest room, with the single front facade window and a bathroom. The corner on this level is filled by the main bedroom, which looks onto one of two inner courtyards, suggestive of the enclosed garden or nakaniwa of Kyoto town houses. On the right side of the entry a short stair leads down to the centre of the house. At its base is a cosy, carpeted sitting room with a fireplace. On one side three vertical slot windows look back into the courtyard shared with the main bedroom, and on the other full-length sliding glass and dark wood doors open onto the timber deck and northerly views.

To the right of the stairs, the brick floor continues into a beautifully proportioned dining room, with a large wood and glass sliding door opening to the second internal courtyard. From a long dining table set under a Louis Poulsen lamp, the view is of an intimate courtyard setting of white walls, lush plantings, gravel, moss-covered tiles and a rectangular ornamental pond. Another large sliding door allows the dining room to be closed off from an adjoining informal family room and the kitchen, which flow onto an open external timber deck. Finally, a few steps lead down from the family room to the children’s wing, with three bedrooms, a bathroom and laundry. In the 1980s, the Caters sought Russell’s assistance to extend the kitchen, family room and external verandah. Original timber joinery was preserved and seamlessly incorporated into the additions, retaining and enhancing the integrity of the spaces.

The Cater House is a fine example of late Sydney Regional architecture. From the later 1950s, Sydney architects such as Russell were drawn to the work of American architect Frank Lloyd Wright and to the spatial organization and constructional motifs of traditional Japanese architecture. There was great interest in the natural environment, demonstrated by the design of climatic controls, the manipulation of natural light, the orchestration of views and a response to the forms of the landscape. Russell’s houses of the 1950s and 1960s embody these references in gestures such as the clarity of natural materials and construction techniques, the juxtaposition of dark timber joinery and white walls, and the use of sliding doors and screens to manipulate internal spaces and diffuse the boundaries between inside and outside.

The Cater House was awarded the 1965 Meritorious Architecture Award by the ACT Chapter of the Royal Australian Institute of Architects. Its lasting merit was acknowledged in 2001 with the Institute’s 25 Year Award, and in 2008 by registration under the ACT Heritage Act for “exhibiting outstanding design or aesthetic qualities valued by the community.” The house has been maintained in remarkably fine condition and Russell’s design has served the Caters well, with family, artworks and books happily accommodated for forty-five years. In 2010, the children have gone and the Caters have reluctantly made the decision to move to retirement accommodation. They hope for a buyer who will understand and enjoy the house for another generation.

This review of the Cater House is part of the Houses Revisited series. 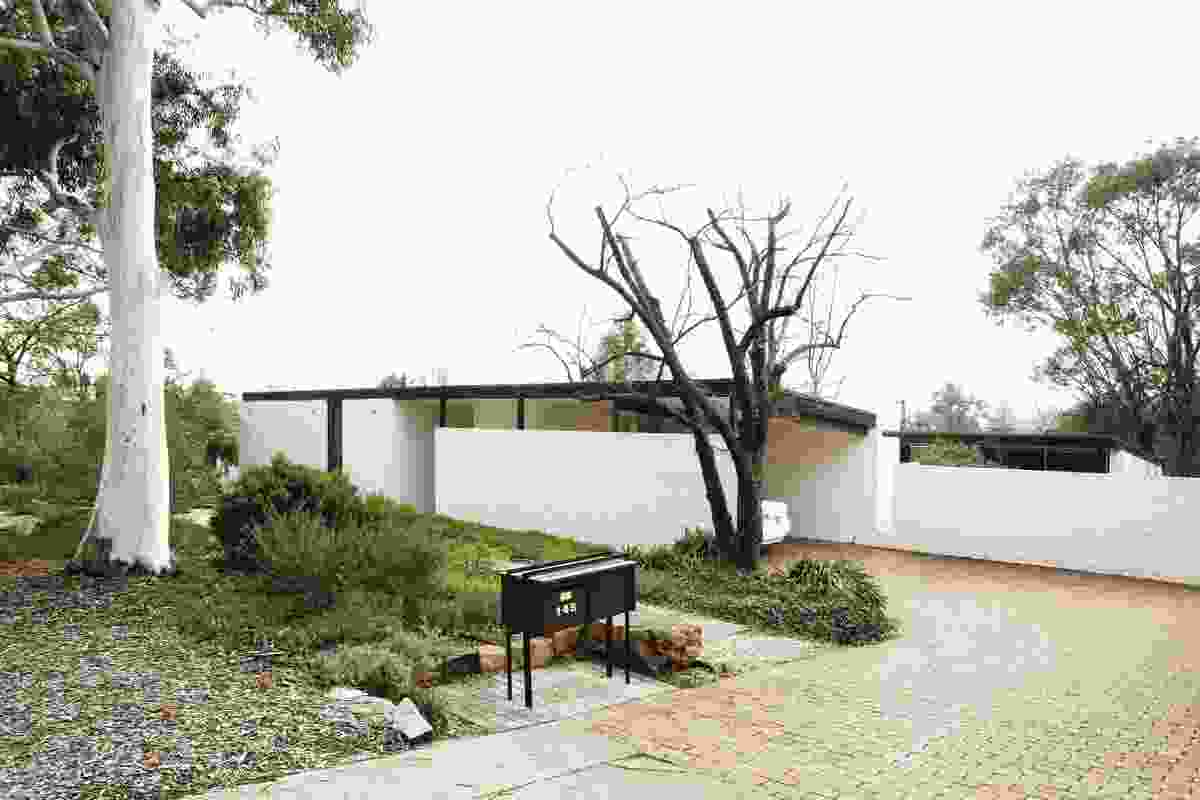 Arrival to the Cater house. A 1965 newspaper described the house as “masked” and “introverted,” referring to the white wall screening the front of the house. The cosy, carpeted sitting room of the Cater house features three vertical slot windows that look back into the courtyard. 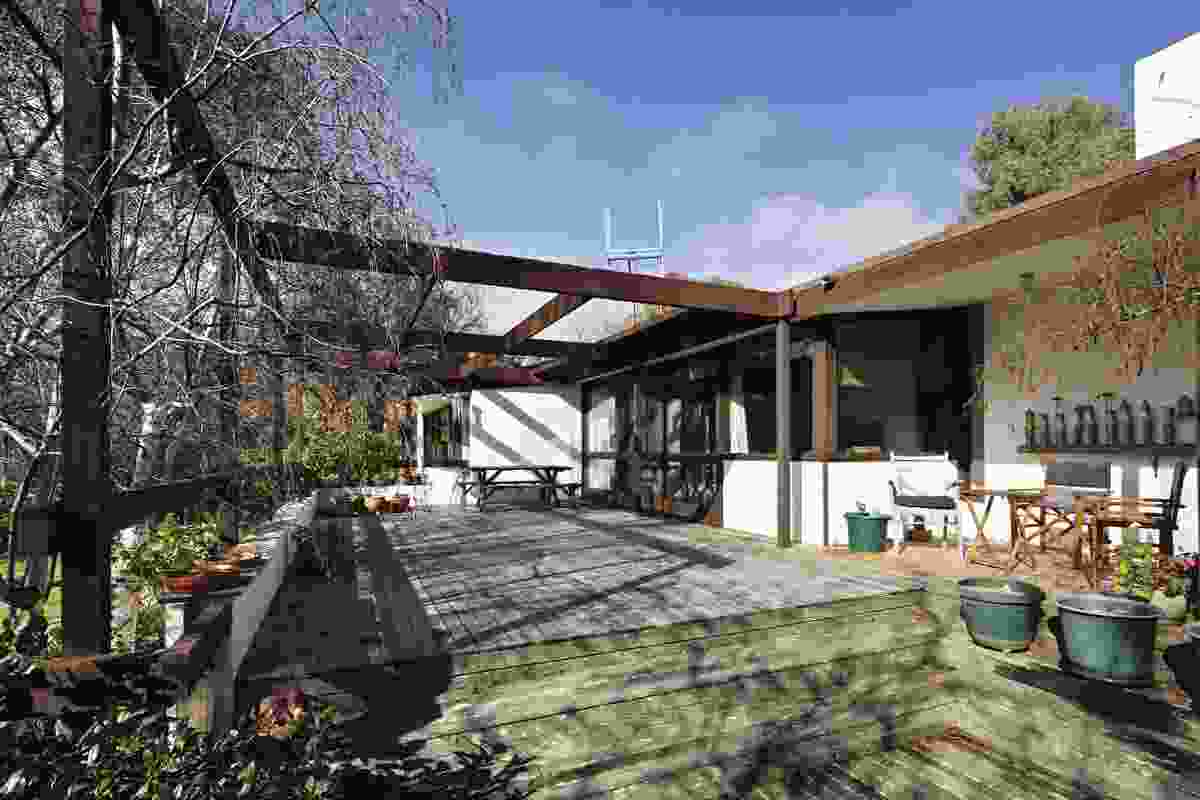 The kitchen and informal family room open out onto a timber deck at the rear of the site. 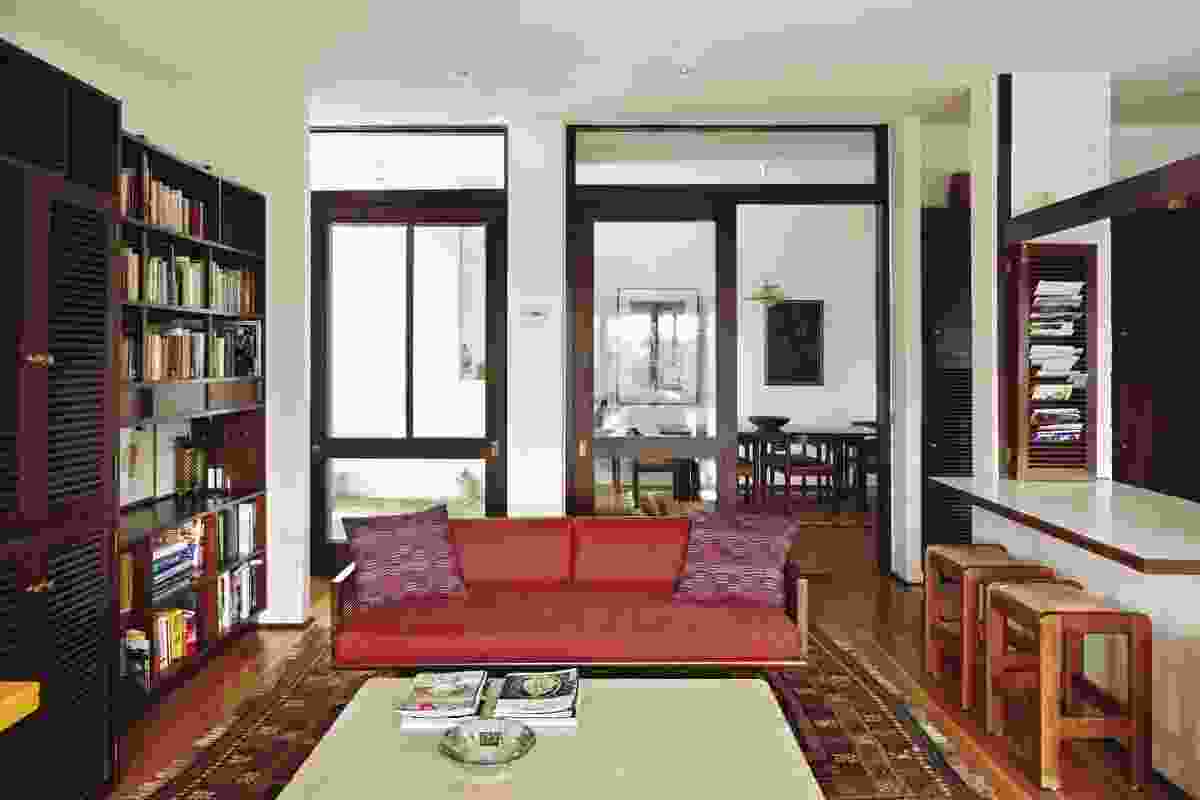 The kitchen is open to the informal family room, with the dining room through a set of large sliding doors. The long dining table sits under a Louis Poulsen lamp. The design of the short stair is reminiscent of the treatment of the external white wall at the front of the house. 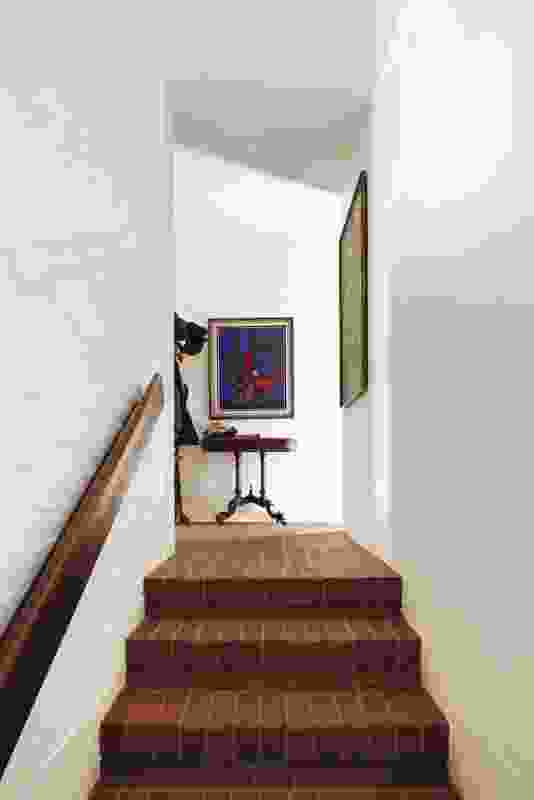 The careful play of natural light on the white walls creates an open, airy atmosphere. 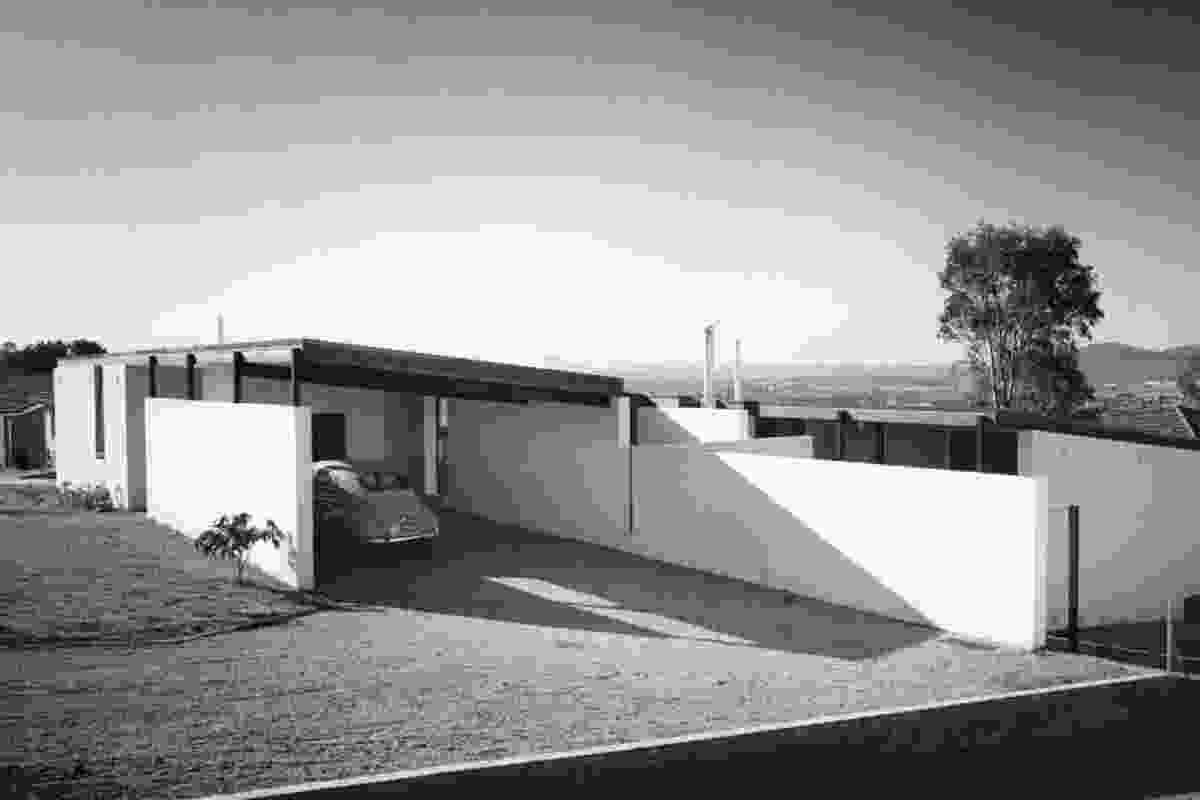 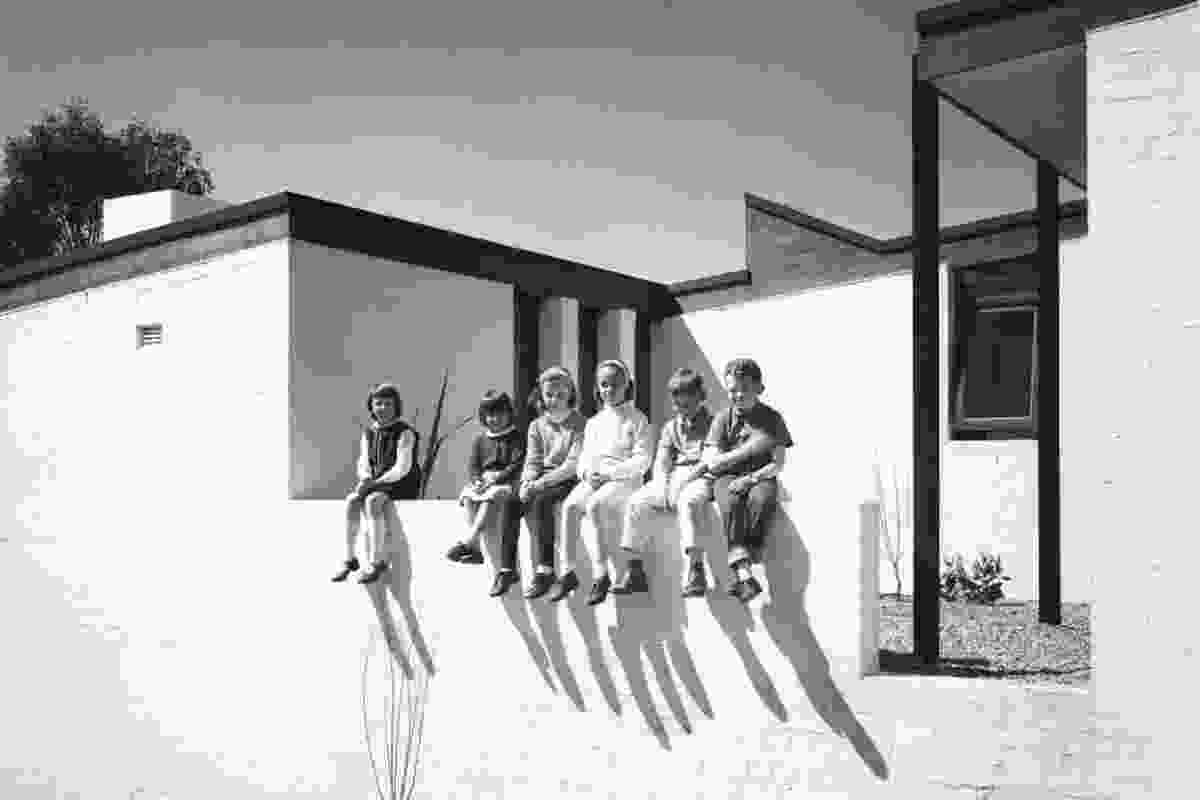 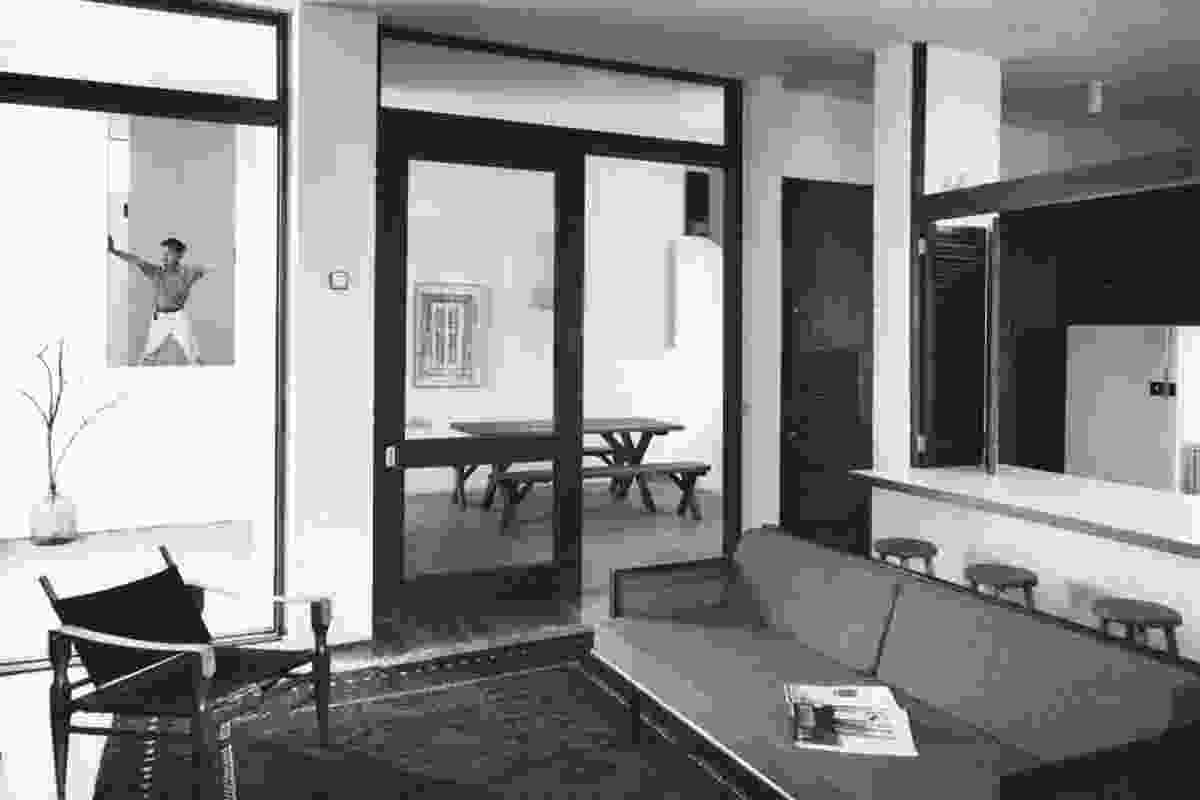 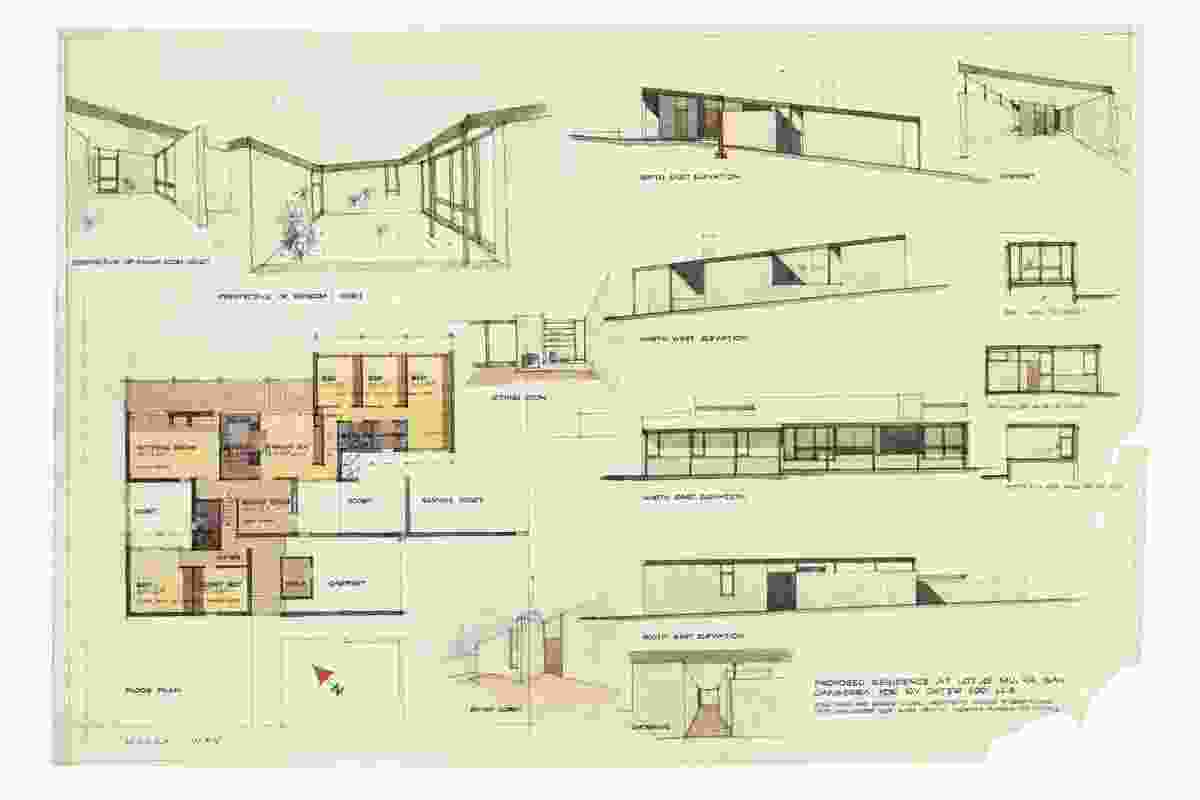 The original drawings of the Cater House, showing the careful orchestration of spatial sequencing.