A gentle, intricate alteration and addition to a Paddington terrace uses soft curves and interlocking forms to graft the new onto the old and provide seamless continuity of space.

A recessed niche in the bedroom wall makes reference to the form of the original attic space.

In alterations and additions to heritage houses, there is a transition point between old and new that needs to be addressed. It may be subtle or stark, a seamless integration of volumes or a dramatic contrast of space. At Regent by Smart Design Studio the transition point is an interlocking composition of softly curved elements that fuse the old and new together to create continuity of space.

The Victorian terrace in Paddington, Sydney, is home to a professional couple with two young boys. To achieve more light, better use and flow of space and an improved connection to the outdoors, Smart Design Studio replaced a previous addition with a new extension and resolved the interior layout.

The extension is made up of three interlocking, stepped contemporary volumes that respect neighbouring houses. Each volume has elongated full-height windows that accentuate the geometry and a splayed angle to reduce the sense of transparency and the heat gain from the western sun. Internally, they provide space for the lower living area and extend the footprint of the children’s bedroom and attic above.

The front rooms have retained their Victorian-era character, with stepped and curving cornices, marble fireplaces and a traditional staircase and banister. The front dining room is now a study for work or homework, with a large opening to the formal living room adjacent. Stairs lead down to the new kitchen, dining and living area, which flows out to the garden. An external staircase leads to the garage beneath the garden and the laundry and powder room have been relocated to the lower ground floor.

The staircase between the two living areas is where the volumes and spaces intricately interlock. An existing bulkhead that wraps around the high ceilings of the formal living room and alongside the traditional staircase establishes the ceiling height of the lower living area, allowing for a generous 1.5-storey- high space. “It’s as if the room is almost grafted into the rear of the house,” says William Smart, founder and creative director of Smart Design Studio. Indeed, when viewed from the living area below, the two spaces look as if they have been dovetailed together. A gap between the bulkhead and joinery – a sideboard with storage on one side and kitchen cupboards on the other – frames views outside and heightens the sense of compression and expansion where the two volumes meet.

Curved elements also unite the traditional and the contemporary. There are subtle curved details in the cornices, skirtings and window and door frames in the front of the house and they soften the forms of the new extension to create cohesion between the two. “Curves can change the appearance of materials and make surfaces feel contiguous,” William says. “A sharp right-angle corner always defines two distinct elements, whereas curves connect materials and surfaces.”

Curves are layered into the corners of the bulkhead and the walls of the new living room, diffusing light and casting shadows, and the curving marble banister and joinery details create flow and connection between the two levels and spaces. Architecture, joinery and furniture are also interconnected in the kitchen, dining and living area. A built-in banquette provides seating around the dining table, while the kitchen joinery extends along one wall, culminating in a sofa with a close connection to the outdoors. A skylight spans the length of the room to bring light deep inside the plan.

Bifold glass doors collapse into a panel on the side of the house at the transition point between inside and out, and a curved white wall sweeps around the edge of the garden, as if containing the outdoor space to read as a cohesive part of the house.

Upstairs, the children’s bedroom has been enlarged and the varied ceiling heights from the extension add playfulness to the space. The main bedroom faces the front balcony and a former adjoining bedroom has been transformed into the main ensuite. A marble installation within the room has intricate interlocking forms to provide for the vanity, shower, bathtub and storage and “is very handmade for how the clients use it,” says William. Towel rails descend from the ceiling with a curve that responds to the cornice. The attic has been enlarged and a bathroom and storage incorporated, offering separation and privacy from the rest of the house. The ceiling has been levelled and its corners rounded off, while the traditional attic form remains imprinted on the folded wall.

Throughout Regent, the transitions between old and new, indoor and outdoor, and traditional and contemporary spaces have been skilfully considered to create interlocking and less-defined thresholds, ensuring the continuity of space. 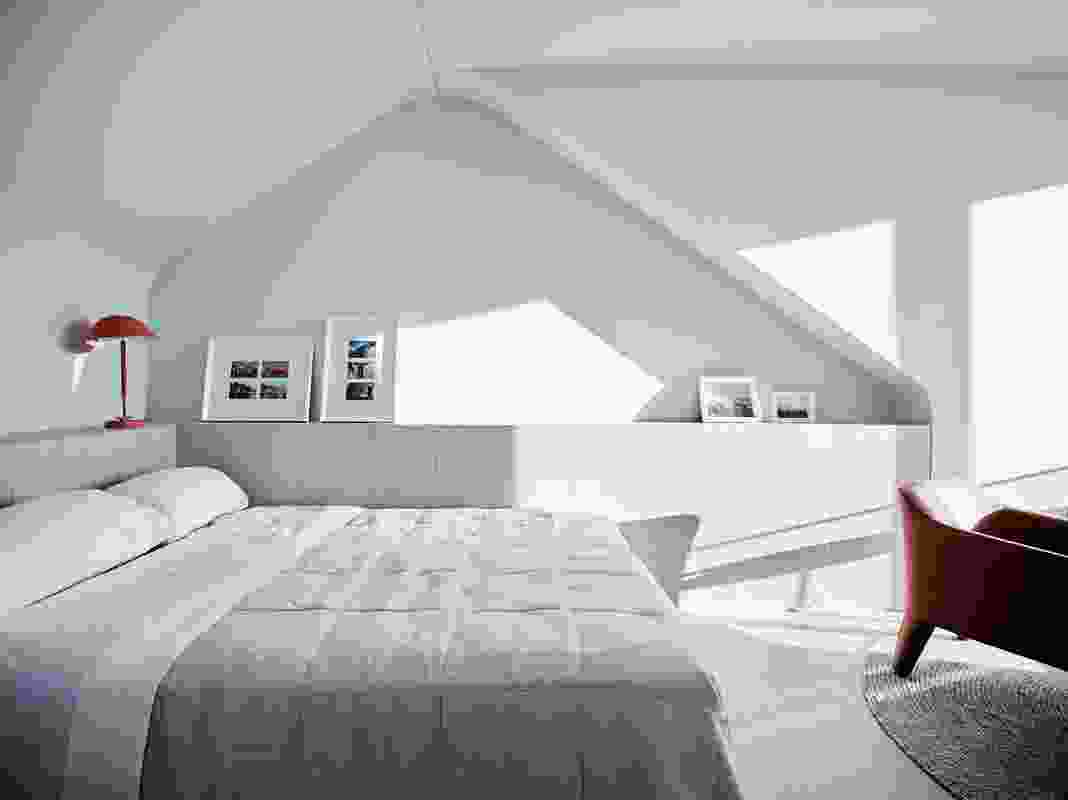 A recessed niche in the bedroom wall makes reference to the form of the original attic space. 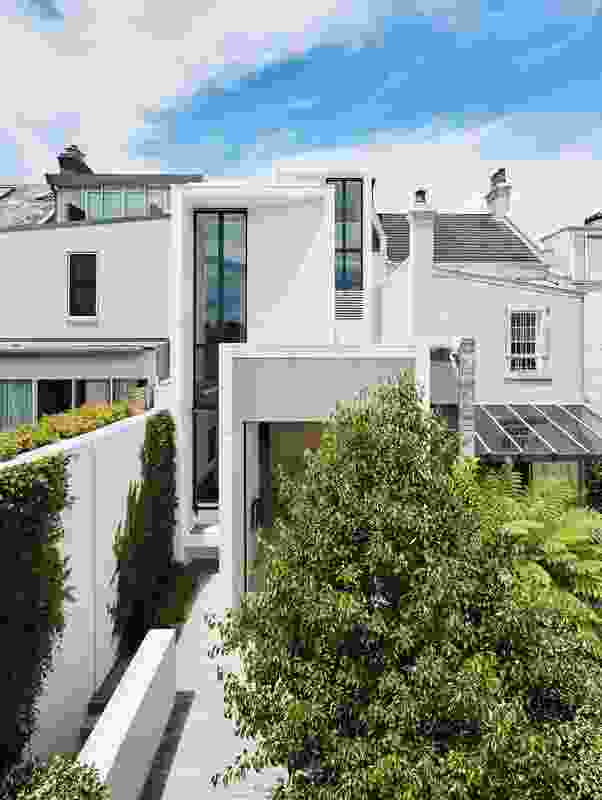 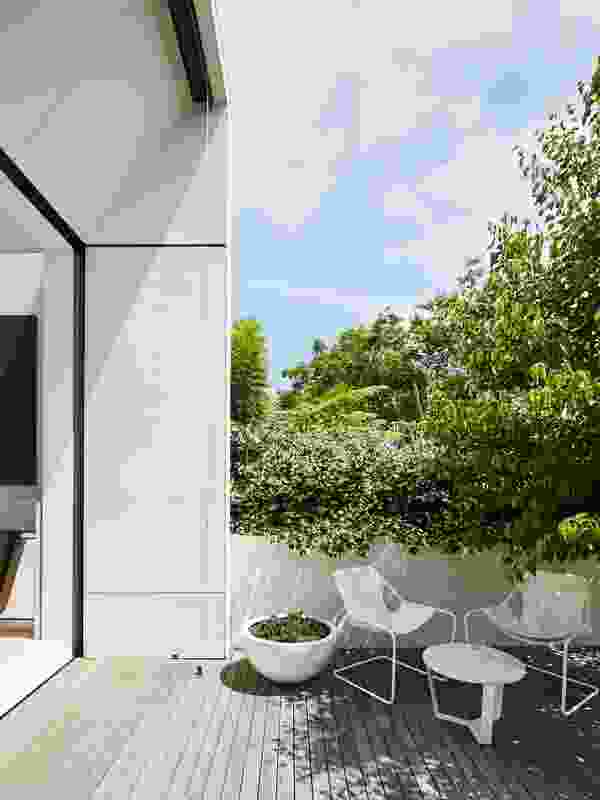 A walled raised planter extends the new architecture into the garden. 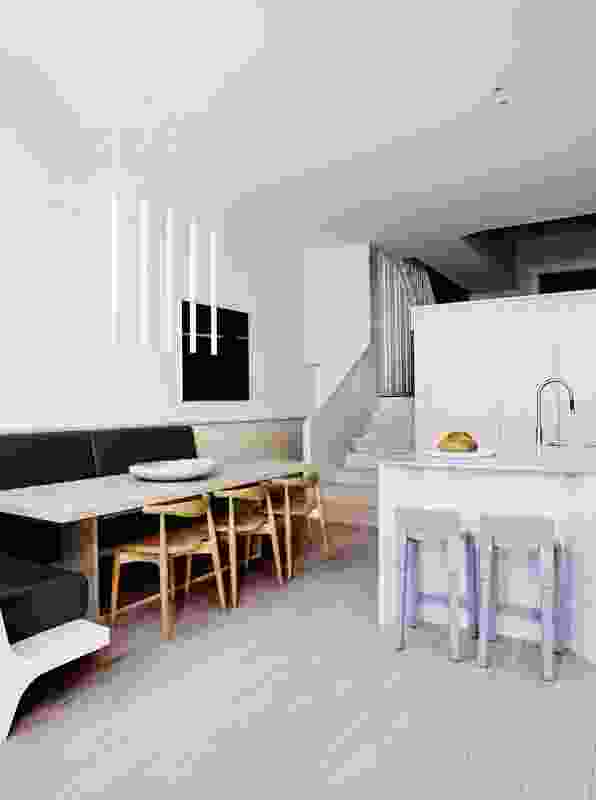 Materials that wrap around edges and a continuous bulkhead merge the new living space into the existing. Artwork: Kathy Barber. 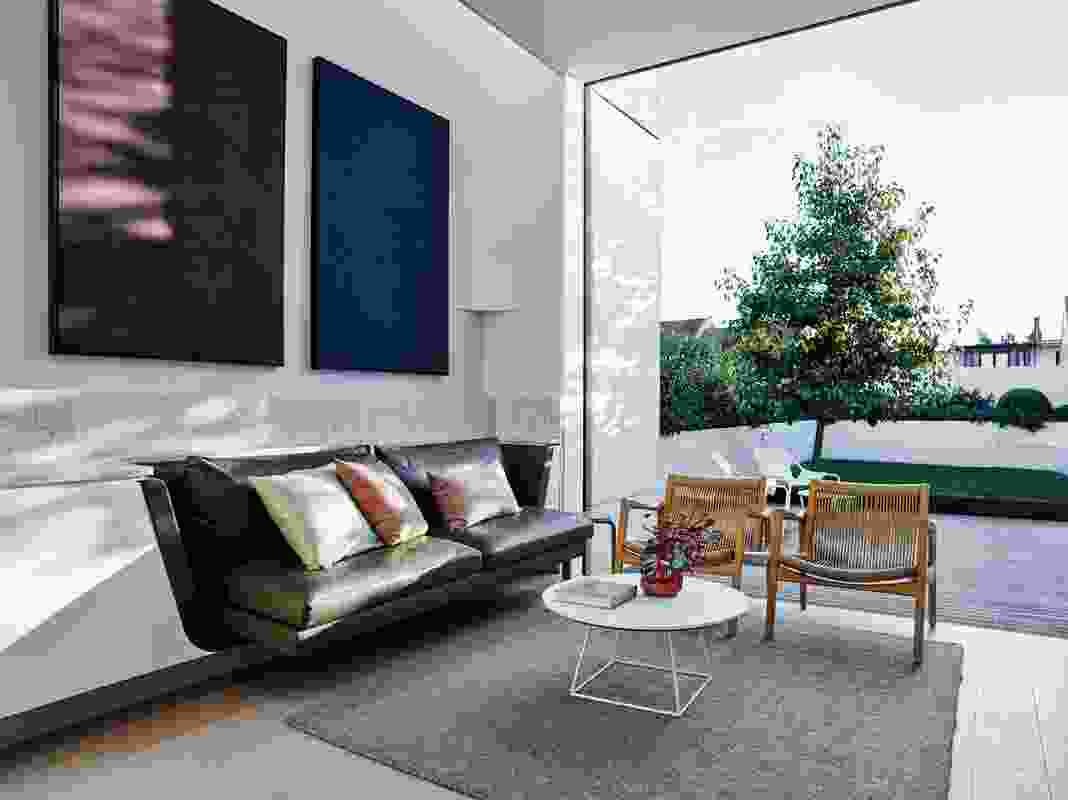 A built-in sofa forms a full stop to the joinery that runs from the kitchen to the living room. Artwork: Gareth Barlow. 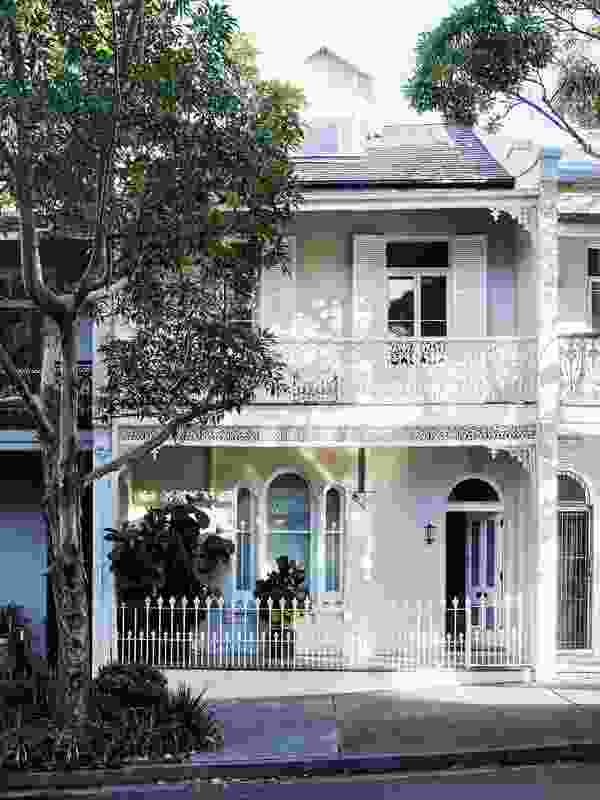 Imperceptible from the street, the addition upholds a traditional heritage frontage. 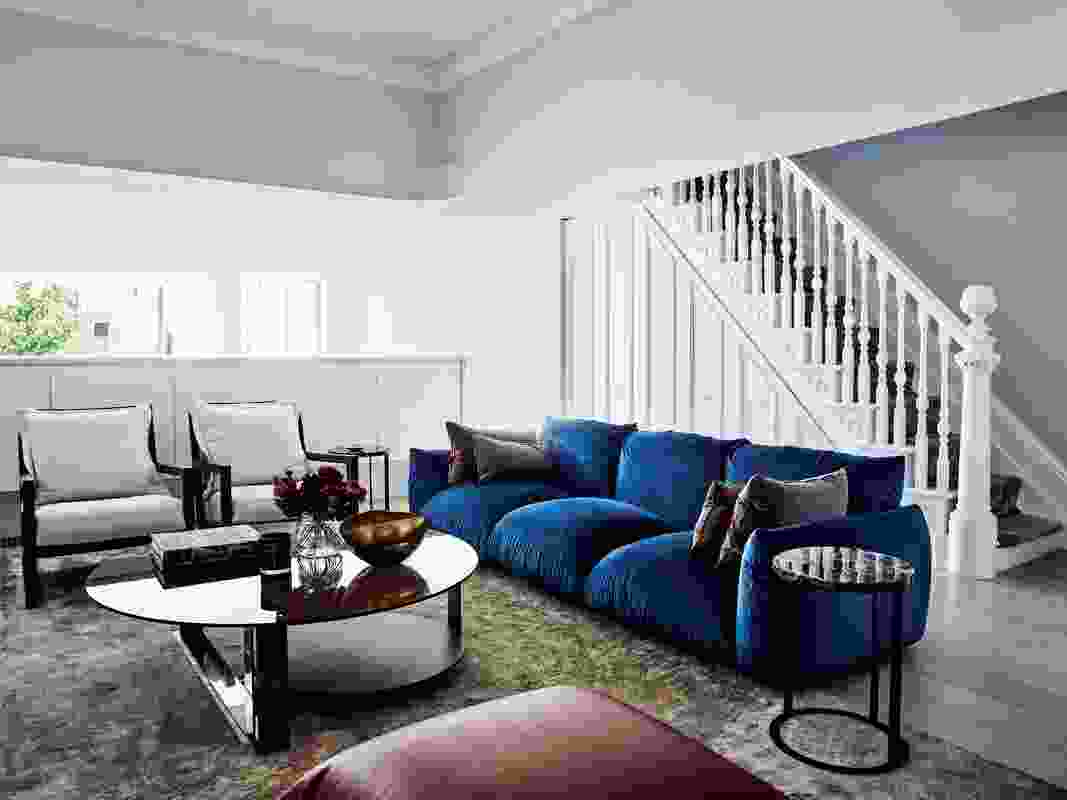 Views are framed by a gap between the existing bulkhead and two-sided joinery that unites living storage with kitchen cupboards below. 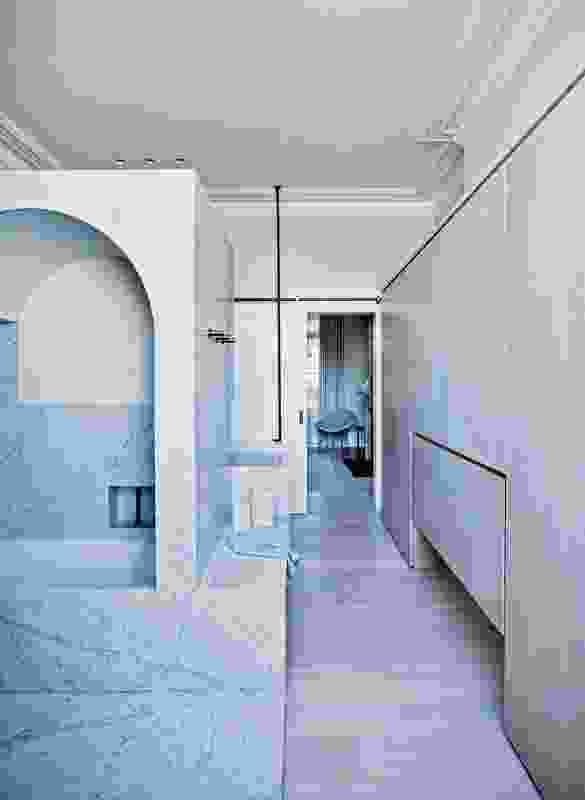 New architecture overlaps the old, subtly blurring the line between heritage and contemporary. 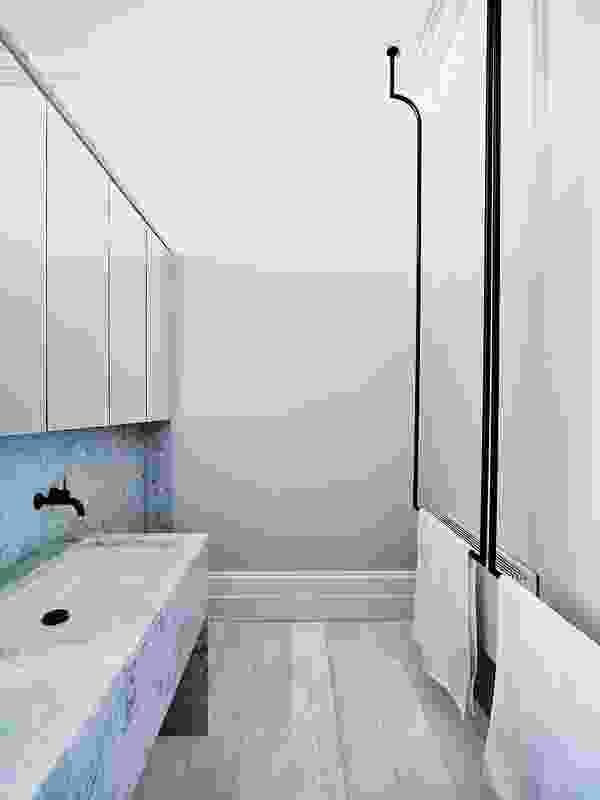