Bligh Graham Architects transforms a Queenslander into a light-filled family home where old and new are connected by a series of beautiful outdoor spaces.

A landscape of gentle terraces is accessed via a low deck.

In the leafy riverside enclave of Chelmer, in Brisbane’s west, time seems to stand still. Grand colonial houses are beautifully preserved; quiet, drowsy streets are picturesquely lined with the thick trunks of camphor laurels (also preserved despite a more recent condemnation as pests). Gardens are prim and proper, and the laurel leaves pick up dots of white light like a mellow Constable landscape. You can almost picture the games of street cricket that might occur between the local lads, and it wouldn’t be surprising to see pet dogs still allowed to roam of their own accord, or a greengrocer making home deliveries. It is like a film set for an earlier, more unruffled Brisbane, when suburbia was only a stone’s throw from the rural surrounds of cow paddocks and market gardens.

Despite a strong communal pact to preserve, ill-advised additions and “improvements” to some of the older homes are common enough. When architect Chris Bligh was asked to design additional living space at the back of this turn-of-the-century home, his appreciation for its elegant proportions and its happy positioning within the site, and the street, were paramount.

Working with the same trusting clients for the third time meant that the brief was open. The near-empty-nesters simply required a couple of extra bedrooms for come-and-go adult children, and more breathable living space that would have ready access to outdoor areas. Over many years, the owner had accrued a vibrant collection of art and objects that are carefully and cleverly placed throughout the house, so the requirement for a high level of detail and craftsmanship was also a given.

The front of the house, consisting of a formal arrangement of a bedroom and living room flanking a central corridor, remains intact. The symmetry of the arched central breezeway is reaffirmed, forming a strong axis to the light, white balloon of reconfigured space at the rear. The new living space is established beneath an old verandah roof and replaces earlier adaptations. The lower roof is neatly modulated and ameliorated through the use of long bands of skylights and a system of exposed trusses.

A kitchen scullery has been placed on the side verandah to the north, leaving a minimalist workbench as the boundary line between where the old finishes and the new begins. “In creating relationships between the old and the new parts of the building, there was the pragmatic issue of mediating between the different ceiling heights,” says Chris. “In order to push the ceiling as high as possible, we exposed the trusses so as to keep the roof above them thin. It also gave us the opportunity to bring in steel bracing and an industrial aesthetic.”

Vertical joint walls are also introduced to the new part at the linking zones, with plasterboard above a high datum line. In general the material palette is simple and neutral, allowing for moments of intensity in details such as the existing marble fireplaces, the drama of raw steel plates for desktops and hearths, and crafted window joinery. As the owner says, she didn’t want “schmick.”

“The bones of the building are on show here, and carry through to the extension,” says Chris. “It’s a way of negotiating between the tectonics of the old Queenslander, with its typical assembly of parts, and the new building, with its clear and honest construction.”

The generous living and kitchen space grafted onto the rear of the house spills onto the garden via a low deck hovering just above the landscape of gentle terraces. A more compressed and precise jigsaw connection is affected between the new living zone and the attached “bush house.” This grounded garden shed of sorts forms a filtered side boundary structure, a walled garden and green lung between it and the side lane address. It houses two bedrooms, a laundry/bathroom, library/television room and study nook. Its wide openings to either side contemplate the wall of greenery in its private courtyard, as well as the shared garden area edged by a pool and deck.

This chthonic space of concrete floors, raw steel and fibrous cement is enhanced through the use of ventilation fanlights. The owners were keen to eschew airconditioning in favour of capturing breezes and maximizing airflow.

While climate has been a driving force in the layout, and the capturing of light and breezes is carefully conceived, the circulation pattern that subtly divides private and public space is equally important to enjoyment of the home. The outdoor space is the celebrated connection point between the more compressed private-bedroom “bush house” and the generous public living areas. The garden is their shared moment and focal point, and the new moment of arrival from the formal entry hall. As a gesture to the supremacy of the outdoors, an existing large pool was cut in half and sacrificed, Solomon-like, to the green walled garden. 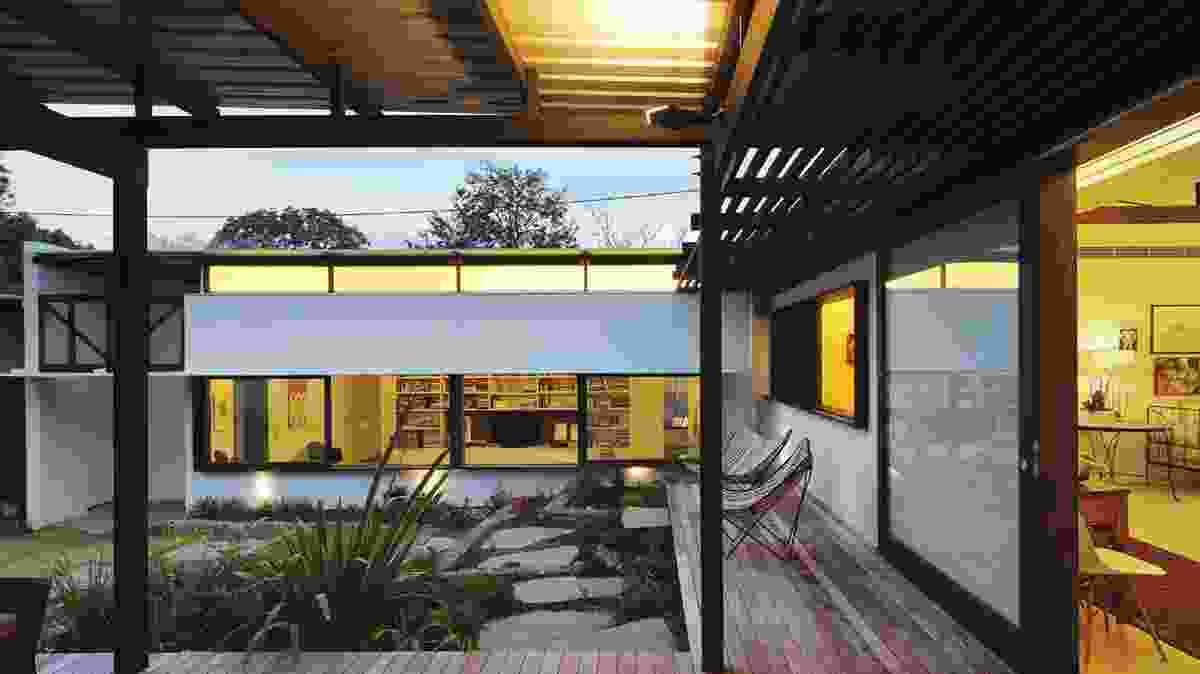 A landscape of gentle terraces is accessed via a low deck.

The new living space is established beneath an old verandah roof. 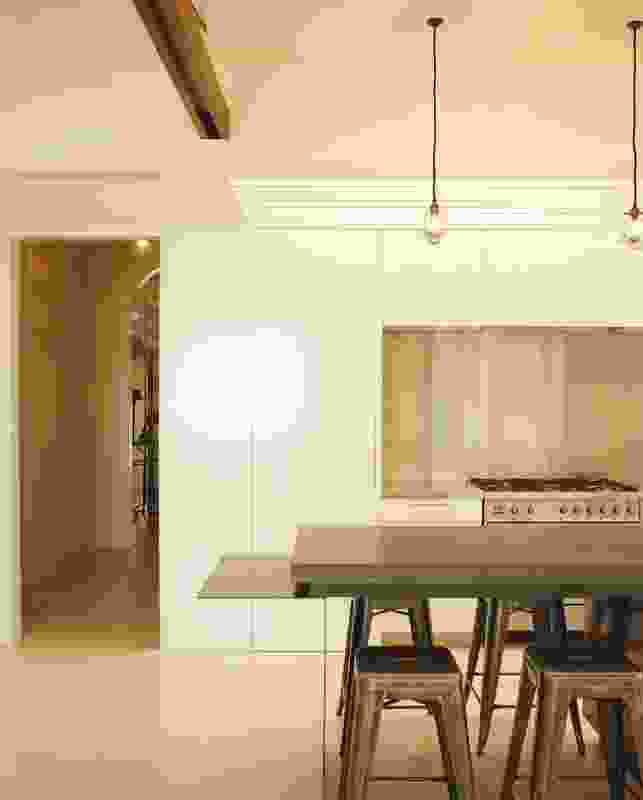 A minimalist workbench represents the line between old and new. 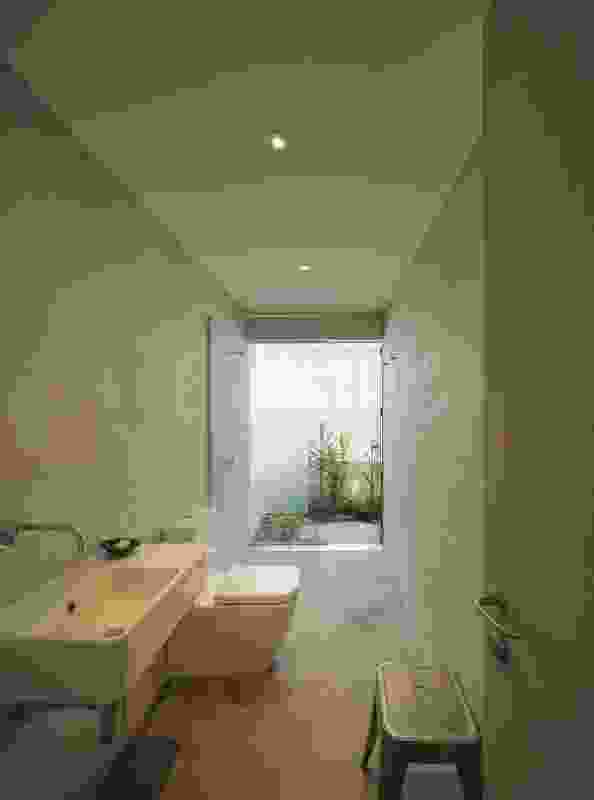 The bathroom looks into a quiet courtgarden. 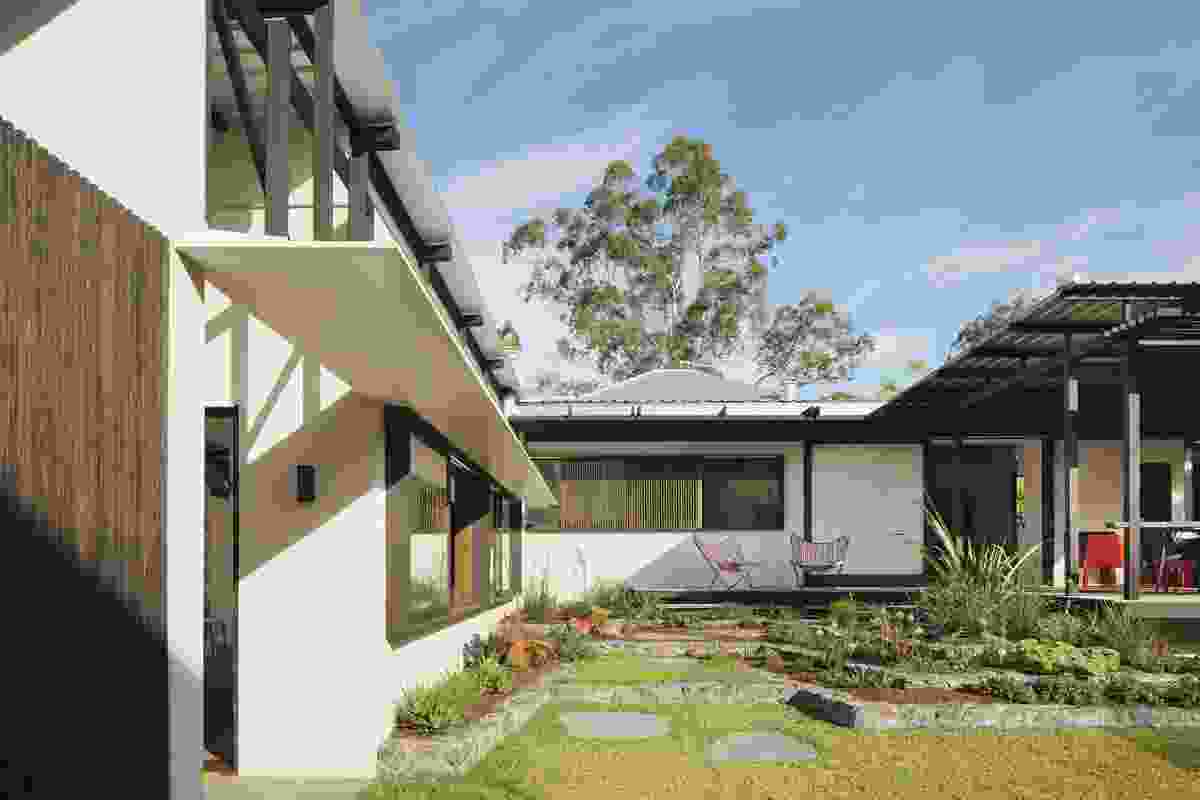 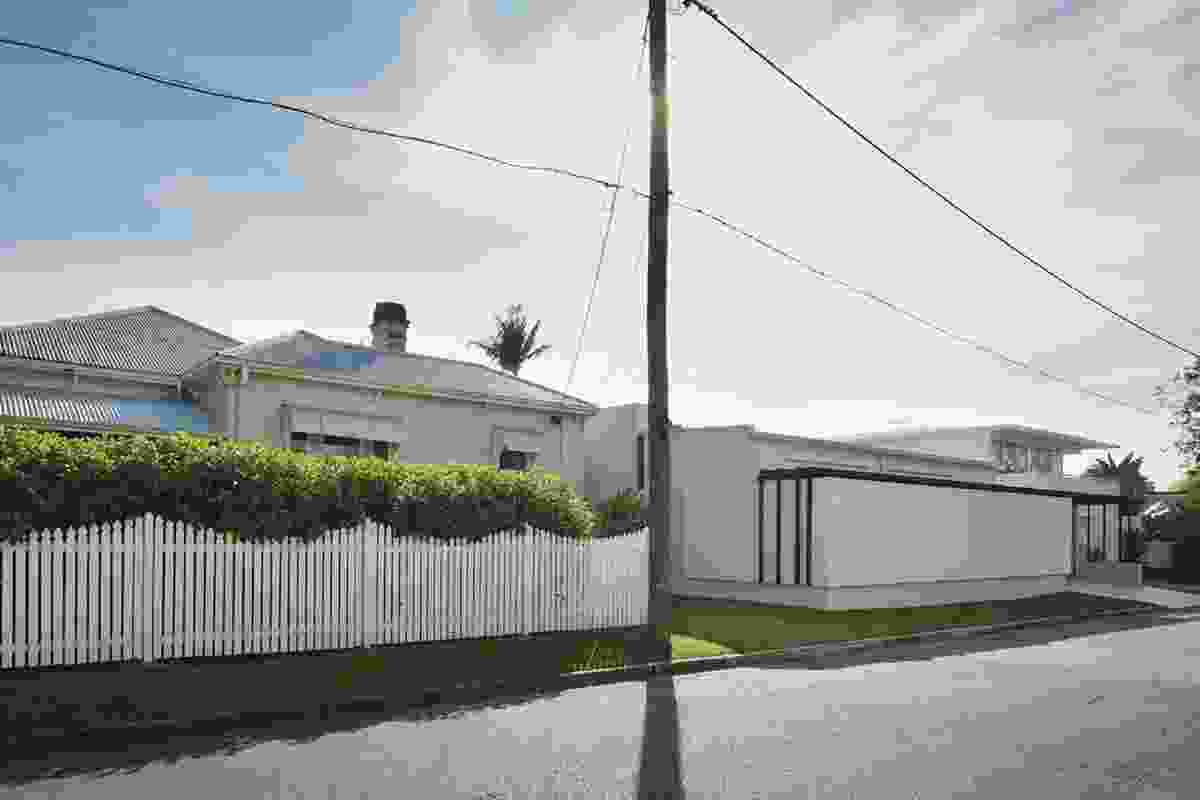