Inside the new Christchurch Botanic Gardens Visitor Centre, the spaces are white, light and ethereal.

The English musician/composer/producer Brian Eno once said, “Stop thinking about artworks as objects and start thinking about them as triggers for experiences”. Patterson Associates has applied this notion to architecture, creating an uplifting and heavenly experience in its design for a centre for visitors of the Christchurch Botanic Gardens.

Sited in Hagley Park, this new building reminds me of a contemporary version of those Victorian farm homesteads dotted about New Zealand’s rural landscapes. It sits glistening, white and elegant, surrounded by a pretty garden with a large lawn out the front in which children can run around and play. But, inside, the spaces are light and ethereal, and again, all in white. A leafy glade pattern in the pre-cast concrete of the ceilings and walls creates a dappled light effect throughout the building. It’s delightful and offers up a strong contrast to the ruins of this earthquake-tattered city.

In 2009, Pattersons won an architectural competition, run by Christchurch City Council, to design the centre. Pattersons was the only short-listed scheme to move the designated site, which was scheduled to be located 100m along the Avon River on the other side of the lawn. Pattersons’ concept was to fill up some dead space at the back boundary with Christ’s College, butting the building up against its boundary and, thus, freeing up the land in the front to create a large gathering space facing north-west. One beautifully sunny Sunday, I visited the centre to discover brass bands playing jazz and hundreds of people picnicking on the lawn. Sue Molloy, who coordinates botanical resources for the gardens, said it is “amazing for the people of Christchurch to have a new cultural centre”.

Patterson Associates’ design was ready to go before the 2010/’11 earthquakes and it was the only capital project to stay alive afterwards. I’m told it was lucky that Christchurch City Council gave it the go-ahead before “everything was screwed down” in the city after the ’quakes.

The Visitor Centre building is an economical build, as public structures go; essentially, it’s a fully automated Dutch industrial greenhouse, which has been modified, with its superstructure upgraded for public usage and to meet the seismic code. The design is a post-and-beam construction with repeating gables and, while the form is simple, it contains a complicated programme of activities. The rationale for the building was to consolidate various operations that were outmoded or inadequate, such as staff quarters built in the 1950s, which still had separate men’s and women’s lunchrooms. The library was situated in yet another building and the old nurseries, essentially modified aeroplane hangers, needed to be pulled down. The Council needed one lump-sum funding package to make it work and, hence, we have a truly multifunctional space that includes: a café, a shop, exhibition rooms, working nurseries, a library, office areas, staff facilities and a vehicle store and workshop. Importantly, the building has brought all of the herbarium collection – dried specimens of physical families of plants – together under one roof. It would be wonderful to have these specimens on display as they contain interesting stories, which would be of public interest.

The working nurseries enable the Council to grow plants to assist with regreening the new city. These are split up and modified for a variety of seasonal environments, with solar shading helping to maintain temperatures and exposure to light throughout the day. The automated shading of the glazing creates an interesting effect between being permeable or impermeable and being transparent enough for visitors to be able to view the plants or not. It prevents 69 per cent of solar gain and creates an ethereal, veiled effect. A tiny, white frit on the industrial, iron-free glazing, similar to what you find on the corners of car windscreens, is another contemporary shading solution that replicates the way glasshouses, traditionally, have been painted with whitewash, which is peeled off in winter and painted again in the spring.

Hagley Park is one half of a colonial settlement of 1,000 hectares which was formed in 1863: split up between the city and public use. It is one of the oldest public gardens in New Zealand; it turned 150 years in 2013. The collection of botanical specimens started during the 1860s, when the Canterbury Acclimatisation Society began to import plants, which were then fed into the gardens. A conservation plan was created in 2013 but planning of the gardens over the years has been pretty loose and the planting really tells the story of the talented gardeners who have designed it over that time.

Surprisingly, the eight working glasshouses in the gardens remained largely intact after the ’quakes and Cunningham House, which faces the Visitor Centre, didn’t lose even one pane of glass. The new building has a direct relationship to this elegant Joseph Paxton-inspired structure, built in 1923 and, now, it even shares a biodesiel boiler, with pipework from the centre fed under the front lawn and into the glasshouse.

Around the new centre, a slough helps with drainage and stormwater is processed through a reed bed and sent into the river. Clearly, this new building’s positive vibes are being felt already among the people of Christchurch, who must see this building as a fairy-tale palace within a troubled land: this city needs more knights in shining armour. 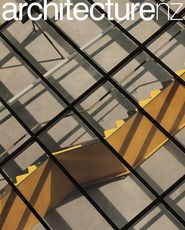 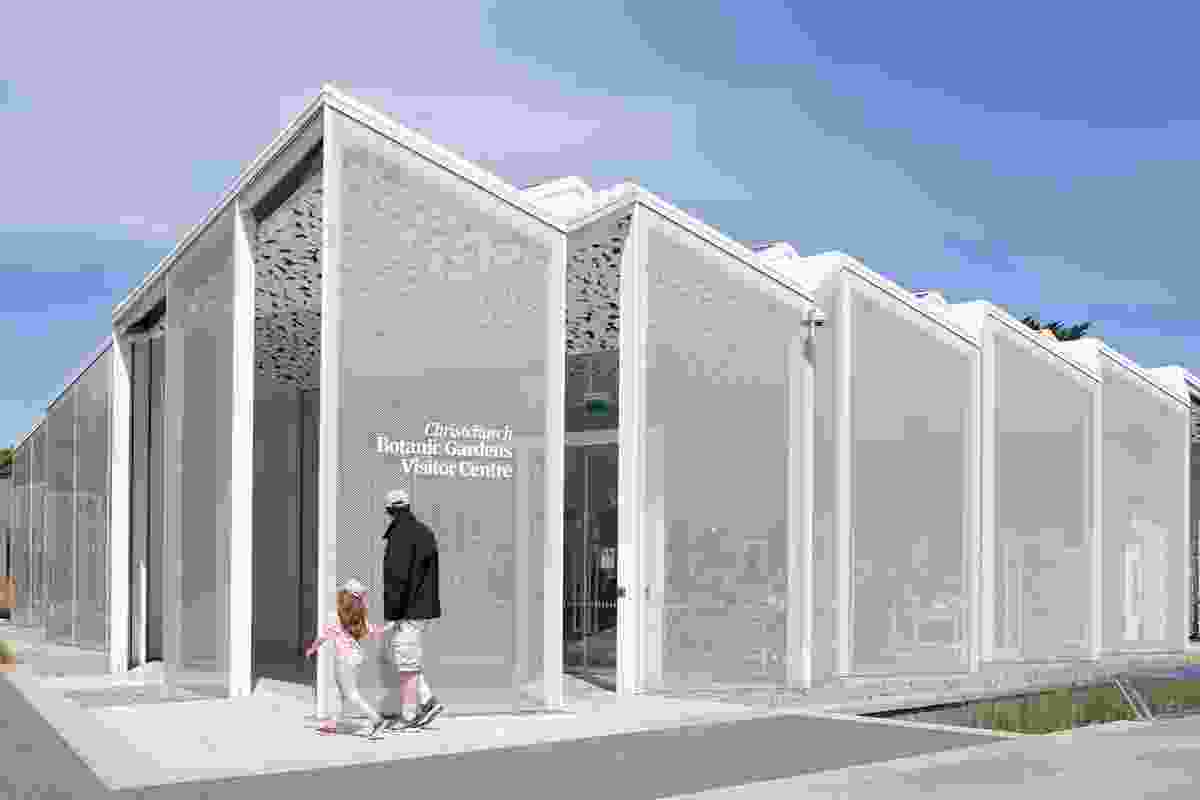 Inside the new Christchurch Botanic Gardens Visitor Centre, the spaces are white, light and ethereal. 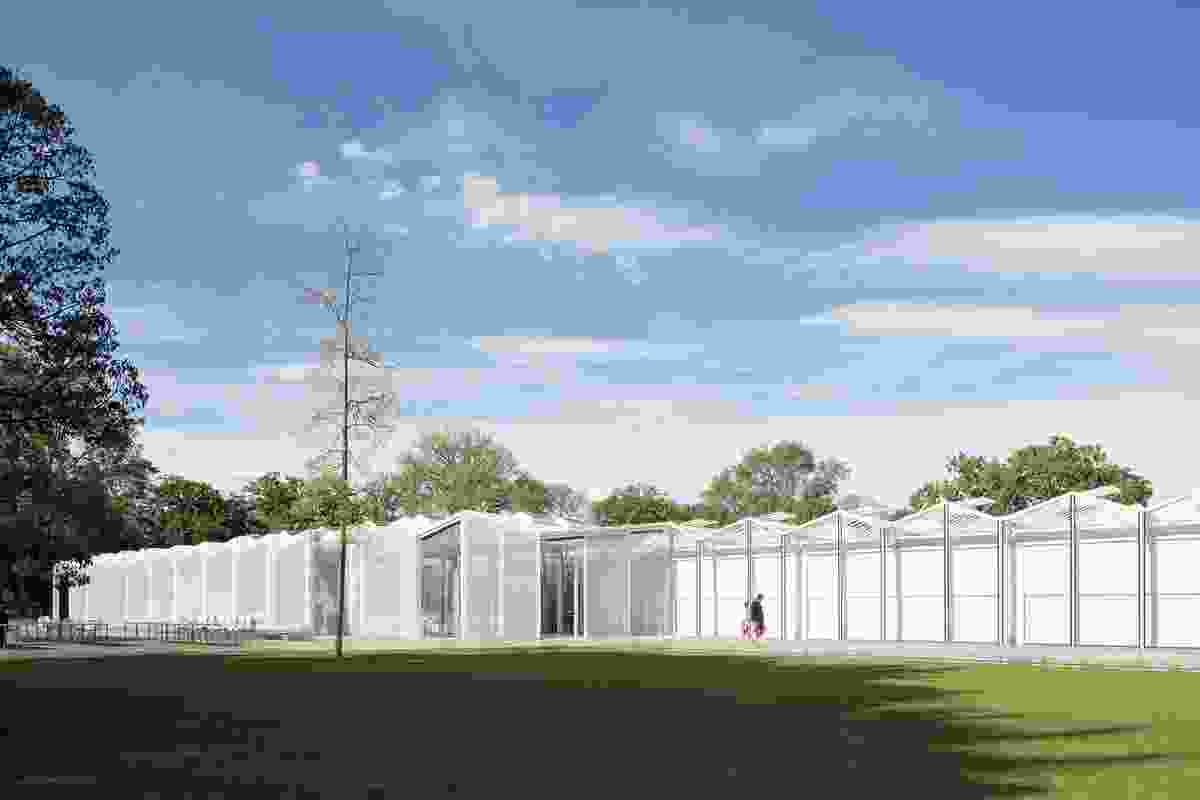 “The design is a post-and-beam construction with repeating gables and, while the form is simple, it contains a complicated programme of activities.” 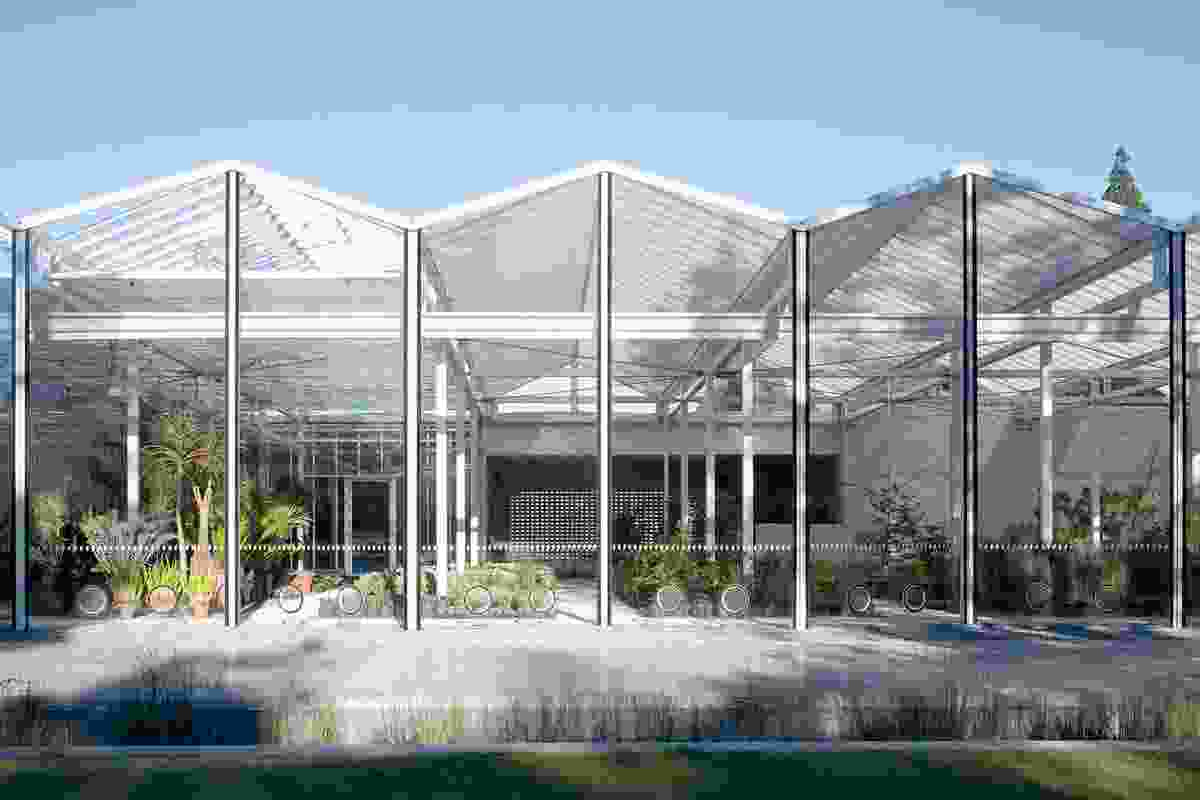 The fully-automated, temperature-controlled nurseries grow plants for both the gardens and the city of Christchurch and can be viewed directly by the public. 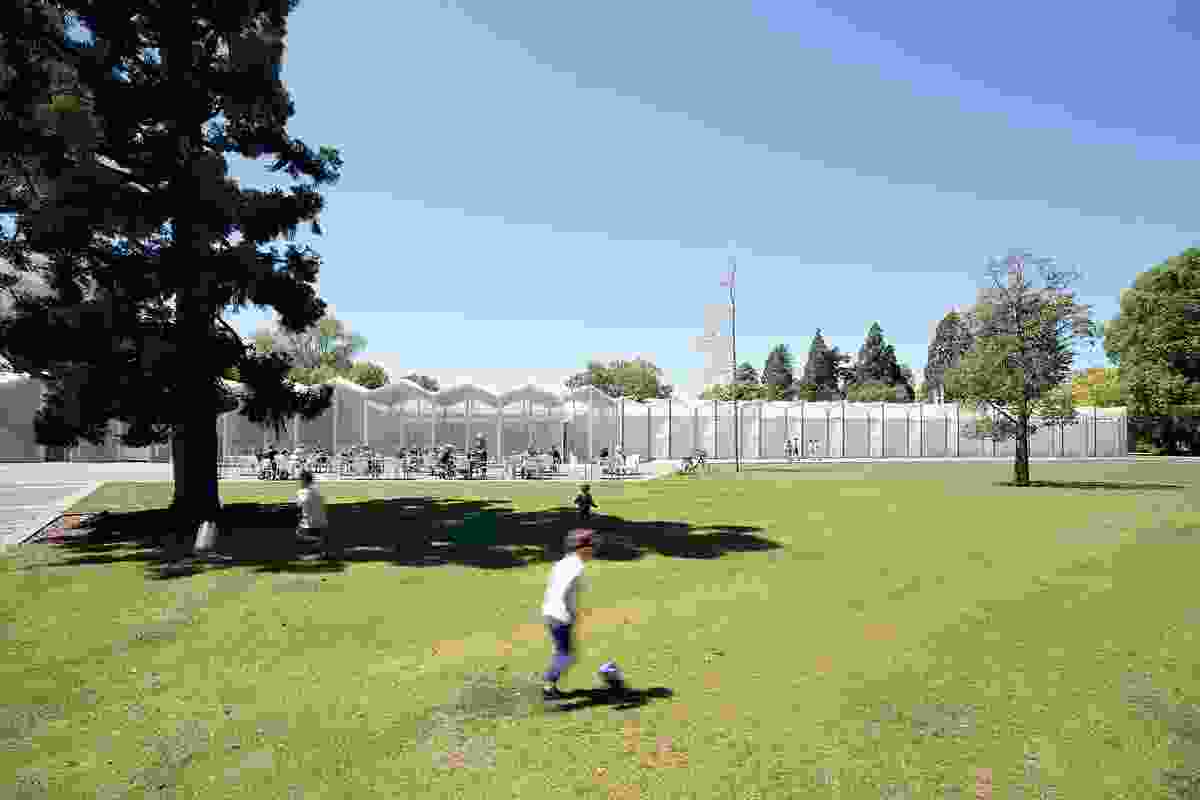 The building sits lightly within the park, with a café that spills out into an outdoor dining terrace, picnic area and play space on the lawn. 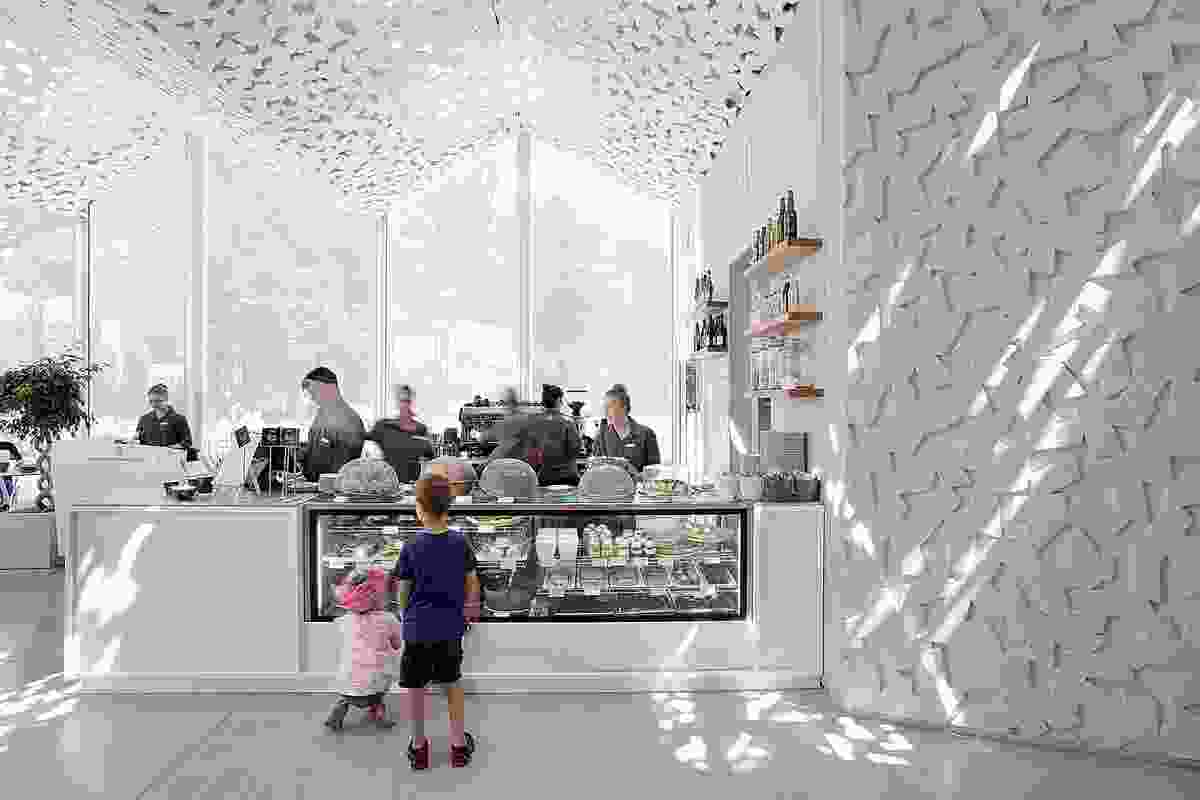 The café overlooks the front lawn and gardens, making it a scenic place to work for the barista. 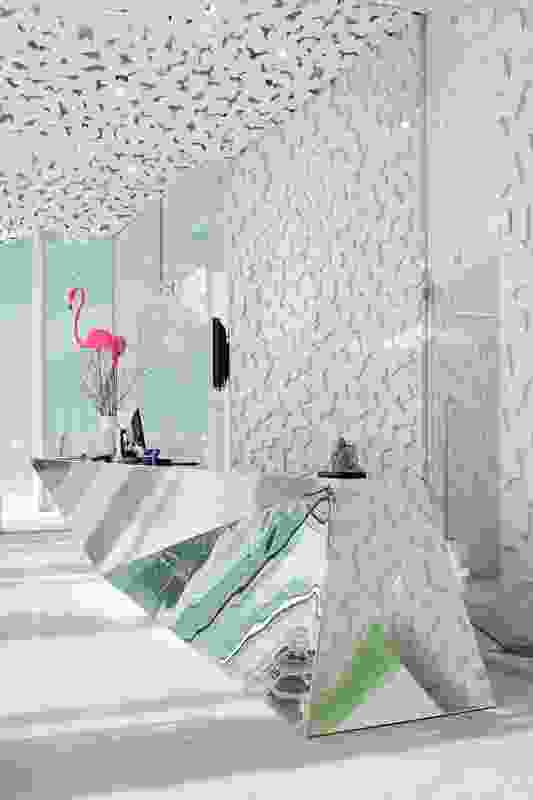 The form of the reception desk, designed by Patterson Associates, mimics the pitch of a Dutch greenhouse.