Embracing the pleasures of constraint, this new house by James Russell Architect was designed to contextually inspired principles, creating a social and relaxed environment that suits the location’s subtropical way of life.

Supported by slender circular steel posts, the crisp white and fine-edged double gables are lofty and open to the street.

Clayfield, in Brisbane’s inner north, is an established suburb situated on gentle breezy hills with views to the bay and city centre. It is characterized by impressive homes constructed in a variety of styles, many exemplary of their particular era, including several designed by renowned architect Robin Dods.

This new house by James Russell Architect was the first to be built on land released after the demolition of the Riverton Early Parenting Centre in 2012, which had occupied a large plot since opening in 1942 as a mothercraft hostel.

Initial contact between the clients and the architect occurred five years ago. While a project didn’t come to fruition then, valuable discussion took place about the potentials of home building in a benign climate. When the client reconnected with James to consider the potential of the newly released Clayfield blocks for a “downsizing” house, the conversation reopened. A relaxed and sociably spaced home was sought by the clients to support the evolution of familial relationships as their three sons, currently aged from early teens to early twenties, grow into independence.

James counselled the clients to purchase a smaller four-hundred-square-metre block neighbouring an existing house on the northern boundary. It was a sensible move as it meant the home’s northern orientation could be designed in relation to a known condition, and defense to the south could be formed against the unknown.

As an established and historically significant suburb, Clayfield is subject to design planning codes regarding its character. James and his colleague John Ellway enjoyed their negotiations with Brisbane City Council over requirements relating to form, material and decoration. Embracing the pleasures of constraint, a tightly managed selection of materials was deployed according to clear and contextually inspired principles; an intelligent balm for the planner’s anxiety for “fitting in.” To meet a quirk in the character code, the street-side face is clad in clear-finished spotted gum. While painted brick was agreed upon for other boundary-facing walls, the experienced substance of the house is distilled into expressed brick and concrete.

This refined expression sits pleasingly in context. The boundary is delicately outlined with familiar galvanized pipe and chain wire fence and gates. The crisp white and fine-edged double gables are lofty and open to the street, and supported on slender circular steel posts, they shelter both the entry patio and a tandem car space. The timber walls set back beneath give little away. For the most part, the house reserves its social energy for the interior, although when the boys feel like it, the barn doors of a small and informal street-side lounge can be thrown wide open in a friendly display.

From first sketch to final plan, the idea was to stretch the dwelling along the southern edge in an expanding and contracting arrangement of solid-void-solid. Space is formed around a grass court with openings organized to maintain privacy in prospect. A shadowy spine connects the house along the southern boundary, interspersed with smaller voids to passively purchase further climatic advantage. Making use of the fall of the land, the house digs in below street level, hard against the side boundaries. A secondary entrance sidles down a narrow stair on the southern edge, primarily for the adult sons to come and go without disturbing the household but also for accessing an ingenious sub-floor workshop.

The material language of the house is fastidious in its economical support of form and space and selected for its inherent “self-finishing” properties and low ongoing maintenance. The interior spaces immediately off the patio are timber-lined. The warm figuration of spotted gum gives way to expressed brick, its courses opened to make screens for a breezeway that buffers and extends into the private quarters of the client couple. From this early point, a stair connects down to the garden court, which creates the breathing space for the diverse elements to share its edge as required and take advantage of light and air. The three sons’ cave-like quarters enjoy it more secretly, while the living space opens wide upon it as space flows enticingly through to the visual magnet of a small pool set along the eastern edge. While the larger gable runs the full length of the house, the smaller gable covers the two rooms – the little lounge and the couple’s library – that participate quietly in bookending the garden void at the upper level. A functionally elongated “his and hers” kitchen that serves the living and dining areas, completes the southern servant spine.

The other significant material is concrete, formed in situ for the base-level elements and installed in hollow precast panels for the upper floor. With an excellent off-form finish, the undersides of the precast panels act as ceiling, with joints masked by timber elements that also hide LED strip lighting.

Just as a poem can be expressed in the form of a solitary line or in the multiple verses of a cosmic saga, so can architecture be spare or surging. While some architects layer their work with details and features, others deliberately and continually focus on distillation and refinement, towards maximizing the affective power of architecture through the most minimal means. Arguably, James Russell Architect is one such practice; and the striking Christian Street House is a fascinating haiku of contextually elegant forms carefully described in the language of resilient materials. 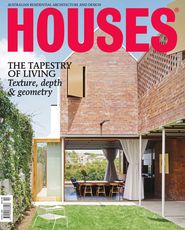 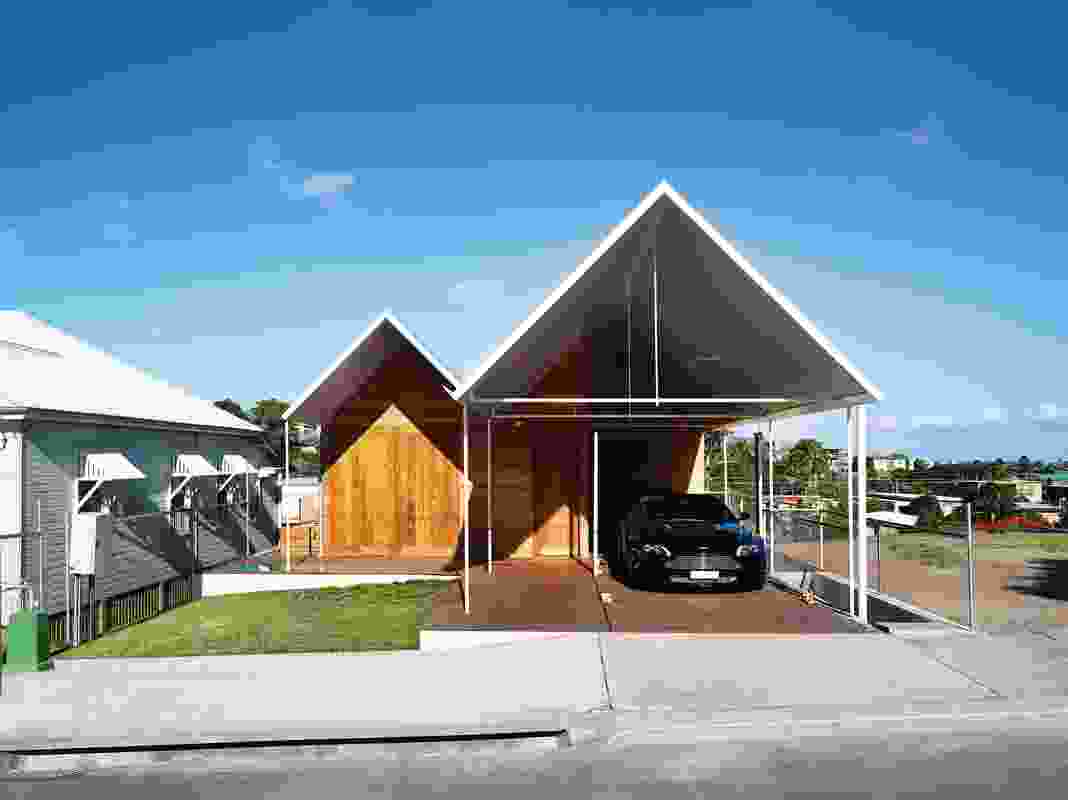 Supported by slender circular steel posts, the crisp white and fine-edged double gables are lofty and open to the street. 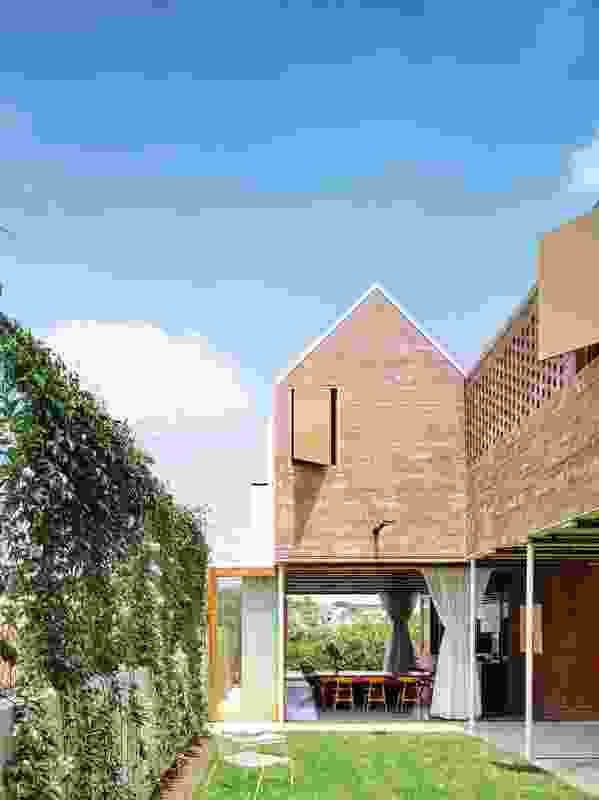 Space is formed around a grass court with openings organized to maintain privacy and prospect. 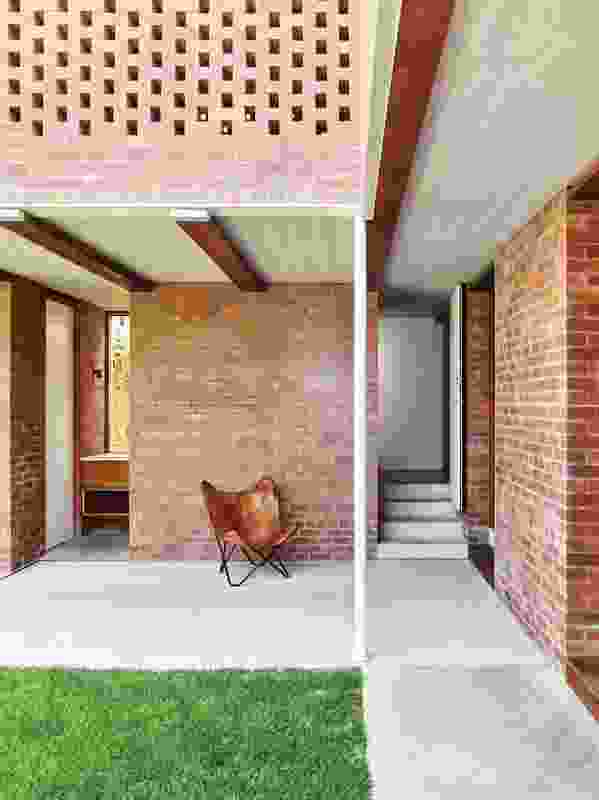 The clients’ sons bedrooms are located at the western edge of the grassed court on the lower level. 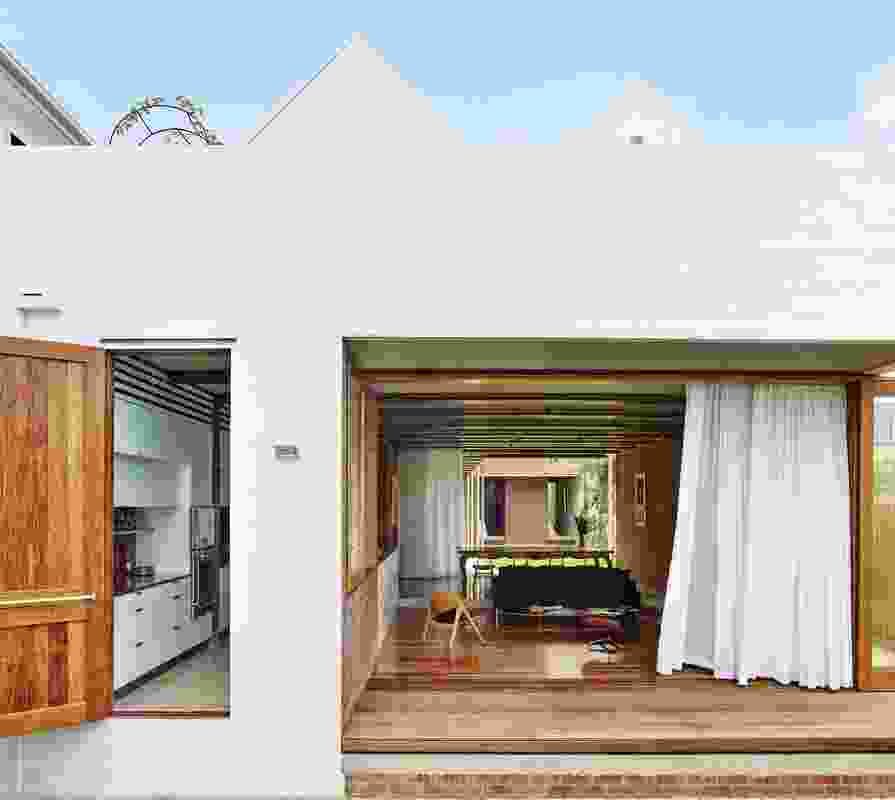 A functionally elongated kitchen that serves the living and dining areas, completes the southern servant spine of the house.

The material language of the Christian Street House is raw and resilient, requiring low ongoing maintenance. 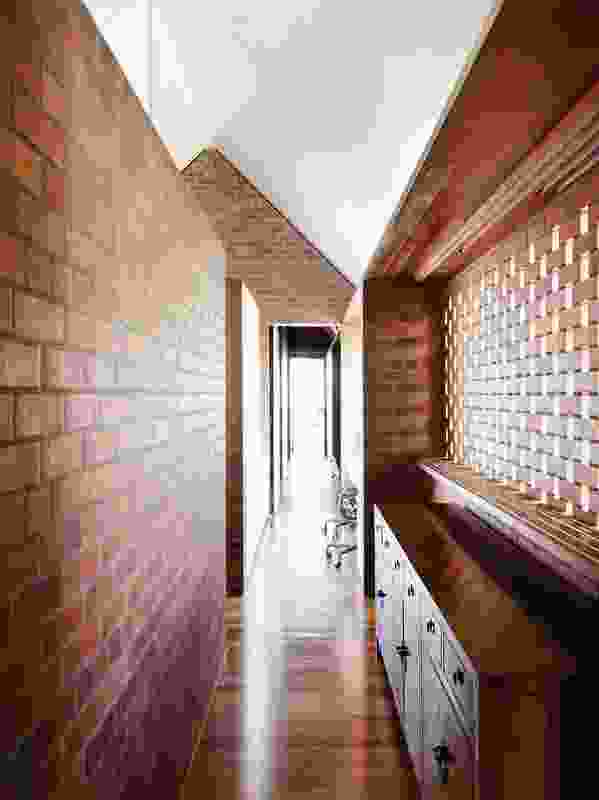 On the entry level, brick courses are opened to make screens for a breezeway that buffers and extends into the main bedroom.

Expressed brick walls continue into the bedrooms, softened by the warmth of the spotted gum floorboards. Artwork: Cornelia Burless. 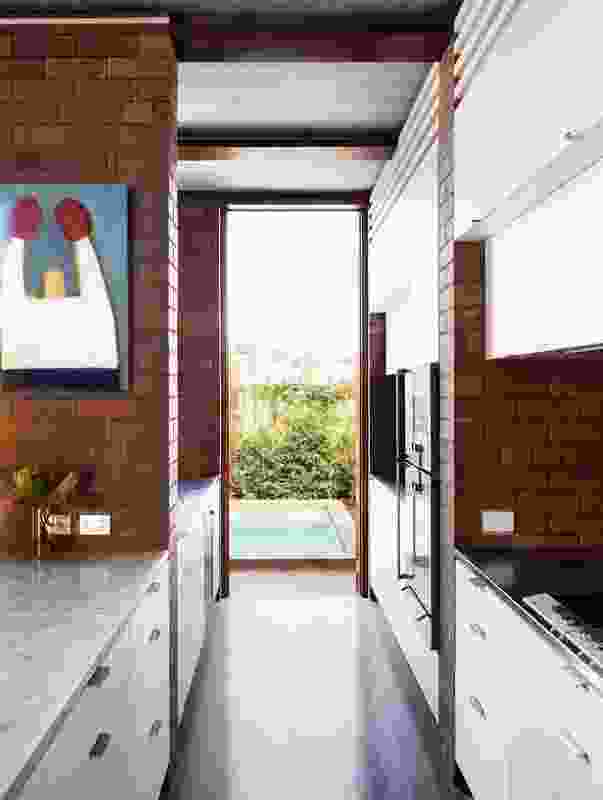 The kitchen flows enticingly through to the visual magnet of a small pool, set along the eastern edge of the site. Artwork: Paul Fairweather. 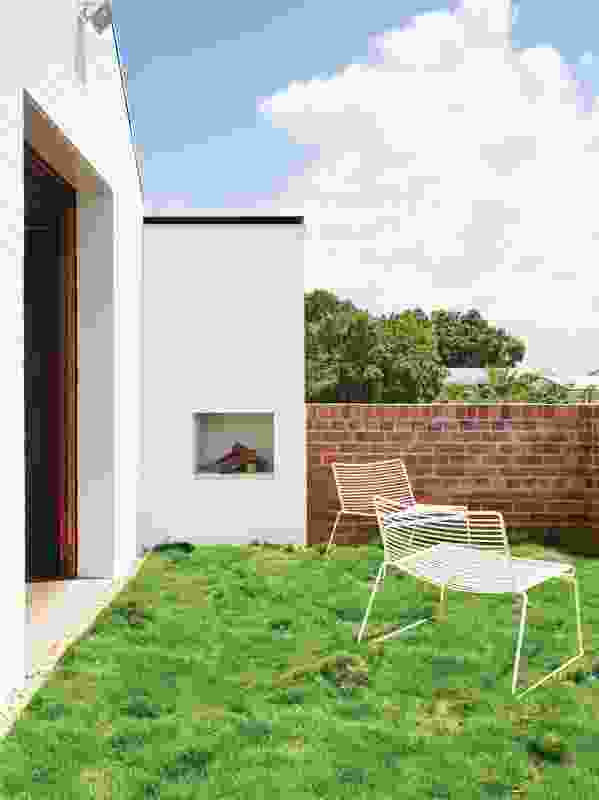 The main bedroom opens onto a grassed rooftop terrace above the pool below. 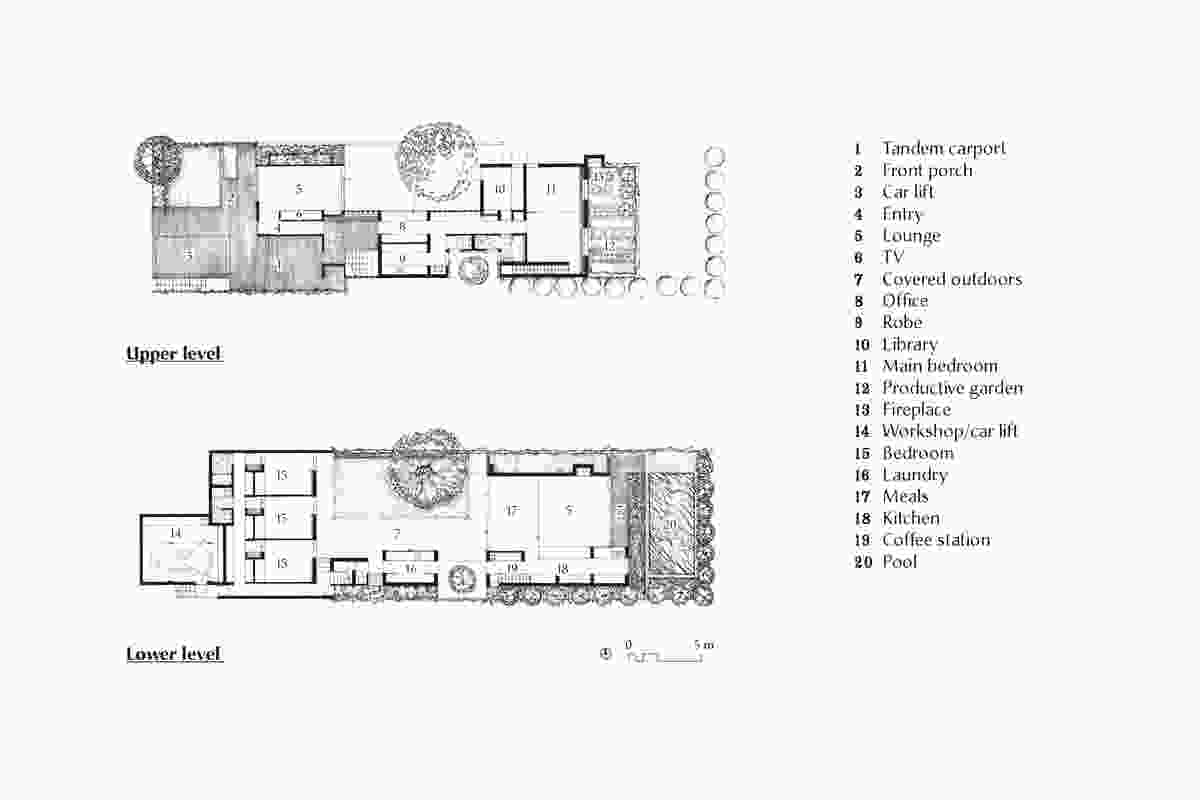 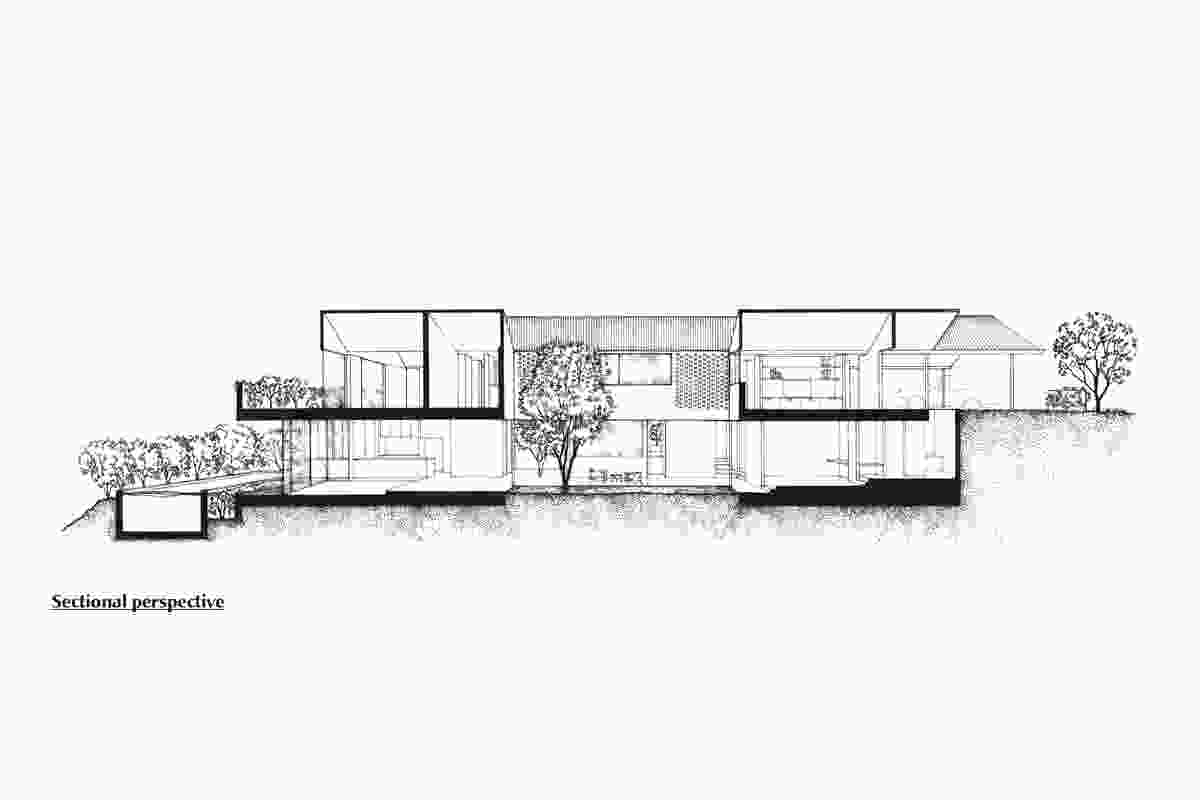