Finding inspiration from constraint, Powell and Glenn has taken a modest budget and turned the Melbourne offices of creative agency Clemenger BBDO into a perfect integration of stillness and energy.

Strong sight lines allow vignettes of activity to be reciprocally glimpsed between the zones.

Architecture firm Powell and Glenn’s refit of Clemenger BBDO’s office, the Melbourne arm of the international creative agency, brings a pitch perfect integration of stillness and energy to the space. The brief presented by the agency’s creative chairman James McGrath was multifaceted – to renovate a “weird and wonderful” 1980s office building that was spatially disorganized and had little visual or kinetic flow, and to subtly enhance working cultures in the process. The pre-existing office configuration closed off the various agency departments from each other, resulting in multiple but individualized pockets of creativity. The space invited retreat but not dynamic interaction.

In Powell and Glenn’s response, the collaboration at the core of Clemenger’s work would find visual expression. It was also the ethos that drove the design process itself. A highly discursive consultation took place, fuelled by a shared belief in the importance of creative initiative. The modest budget, too, was an enabling force for the architects, who found inspiration in the idea of constraint. The furnishings and fittings are low fuss, almost utilitarian – striking green carpet throughout, concrete feature walls and white, mini- malist office furniture. At the same time, through the workings of the reconfigured space itself, light, dynamism and fluidity enrich and charge the work environment. It is, in a sense, the people, their activities, movement and studied repose that the design mobilizes to central effect.

The space is reconceptualized as a series of encampments or zones that accommodate the various strategic divisions within the company – from “the suits” to “the planners” to “the creatives.” These zones are hotbeds of energy but also of quiet contemplation, as sliding walls and dedicated spaces of refuge within each allow the space to transform as required. Ever-moving vignettes of activity can be reciprocally glimpsed between the zones with the introduction of strong sight lines, while incidental meetings are encouraged by the reconfiguration of previously closed-off rooms and dead end spaces.

Communal spaces are prominent. The welcoming foyer, complete with a large-scale changeable wall panel behind the reception desk that reflects key contemporary campaigns, leads into a striking exposed staircase. This connects the two light-filled floors and knits these together with a triple-height void created by the original west-facing glass atrium. Clearly, the design celebrates the space rather than works against it. A common mess area – the modern-day staff canteen – with a chef making on-site meals, sits on the edge of the impressive void, allowing sight lines throughout the building.

A massive steel bench is an arresting presence in the mess area and is indicative of the project’s approach to a cohabitation of understatement and striking aspects. A signature aspect of the design is the lighting work of Stephen Hennessy, whose diverse installations are beautiful notations throughout the space. Hennessy’s work is a key visual feature of the external component of Powell and Glenn’s vision. Here, a previously unloved and scrappy rooftop, accessed from the bottom of the void, is transformed into a multipurpose outdoor playspace, complete with basketball cou rt and mini soccer field, as well as a large terraced area that becomes a rooftop cinema for staff on warm summer nights. A cottage garden grows in one corner of the rooftop, servicing the in-house kitchen with its fresh produce.

The star of this external space, however, is what architect Ed Glenn refers to as the “creative pavilion” – essentially, an additional venue within the complex, purpose built to afford the psychology of off-site retreat. Sited squarely adjacent to the sloping glass atrium, the simple, clean lines of this rectangular structure commun-icate sanctuary. Inside, the moveable interior can be configured into one large room or two smaller spaces, allowing for different sized gatherings, such as meetings and creative hothousing.

The space is booked solidly by staff, according to Glenn, who suggests that the value of such a space lies in its idea as much as in its use. Like a balcony off a bedroom, the potentiality of such an additional space – the sense of its availability – enriches the primary work environment by default. Contributing to this aura of almost mystic possibility, the horizontal roof of the pavilion hosts two arresting installations by Hennessy – two moons, one full, one crescent, that glow gently throughout the night. Enhancing the drama of these installations is the solid cement front face of the pavilion that gives way only to a small doorway. Once inside, however, the interior opens up to light via full-length clear windows at either end of the rectangular form.

Such interplays of openness and seclusion, the implicit and the explicit, the still and the mobile, are at the heart of this successful project – at once an enabler and a supporter of the creative engine that is this workplace. For McGrath, this “transformational architecture” has achieved its goal: to understand and to communicate spatially “how we work en-masse and how each individual has a place.” 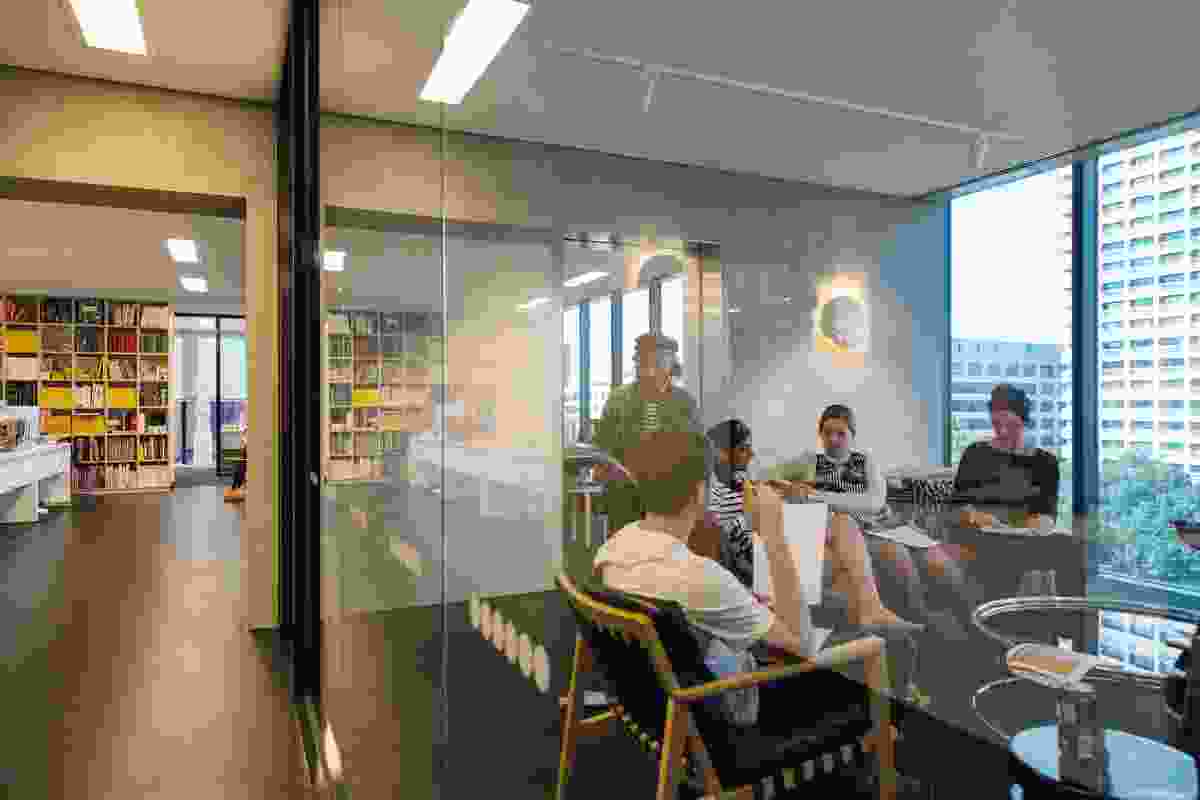 Strong sight lines allow vignettes of activity to be reciprocally glimpsed between the zones. 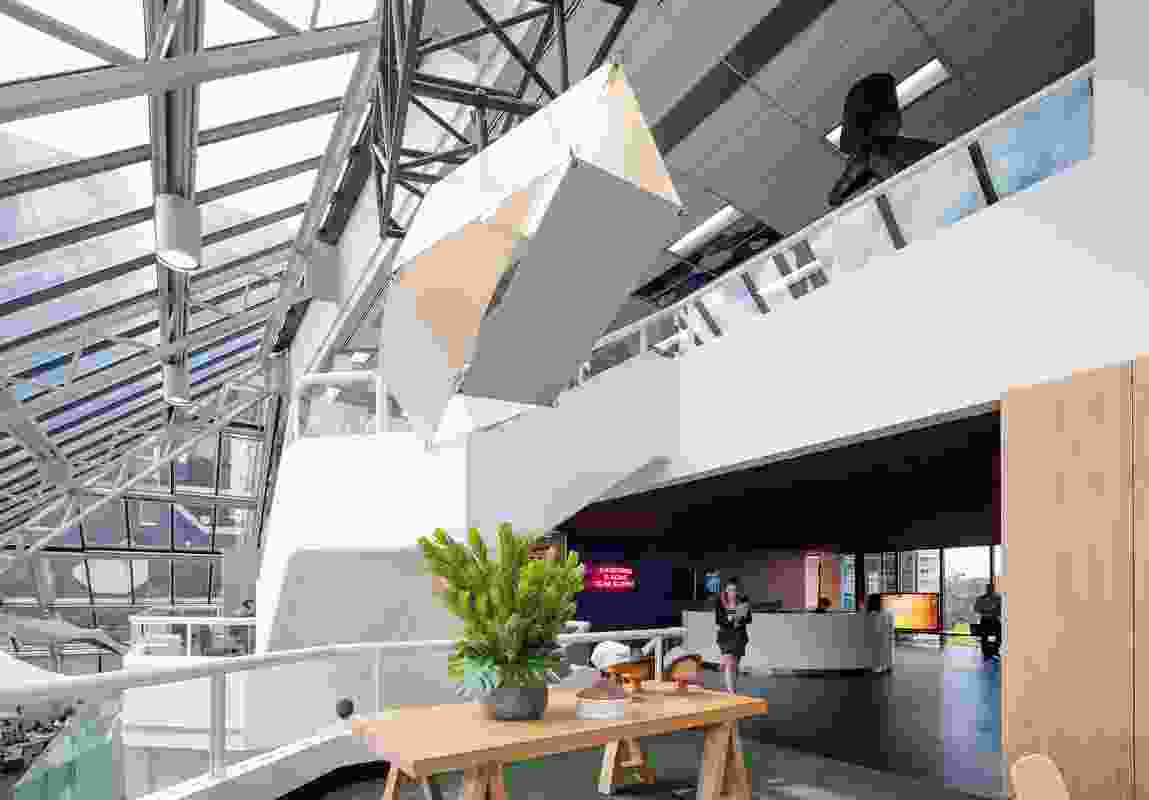 The welcoming foyer leads into a striking exposed staircase and a triple-height void. 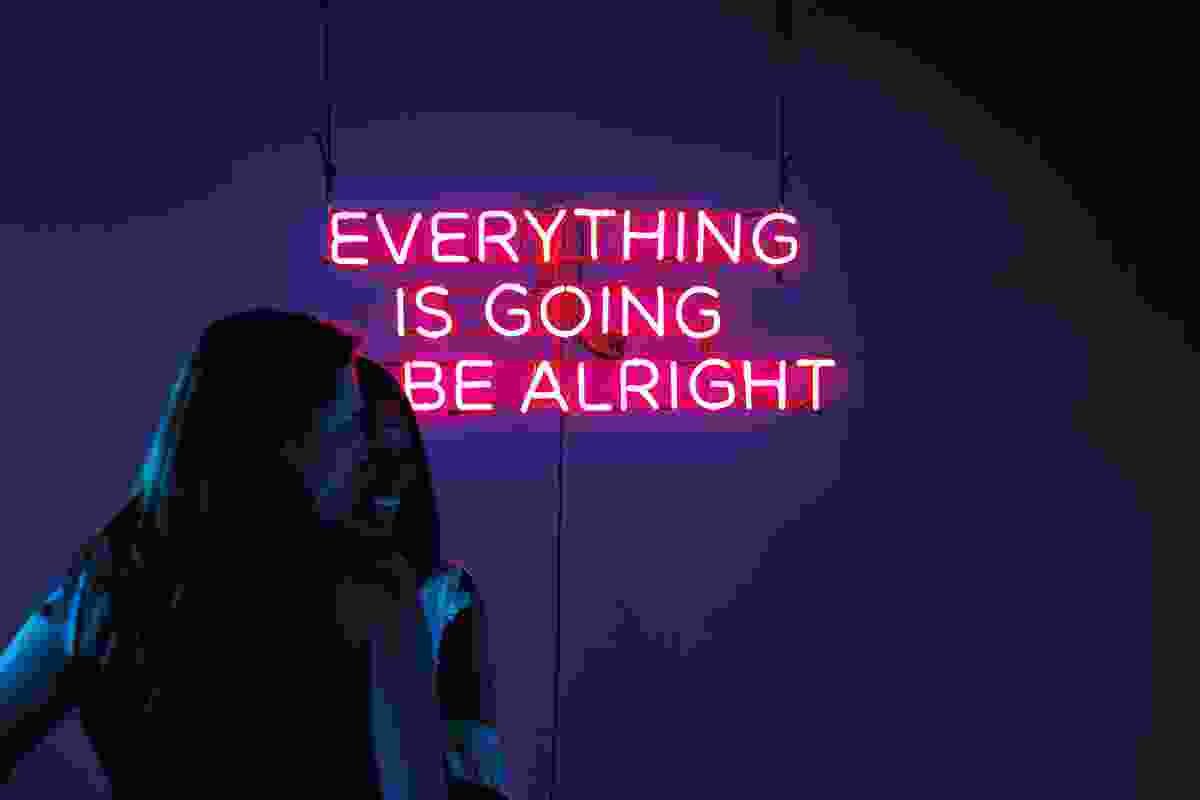 In the foyer, a neon sign captures the energy and optimism of the company. 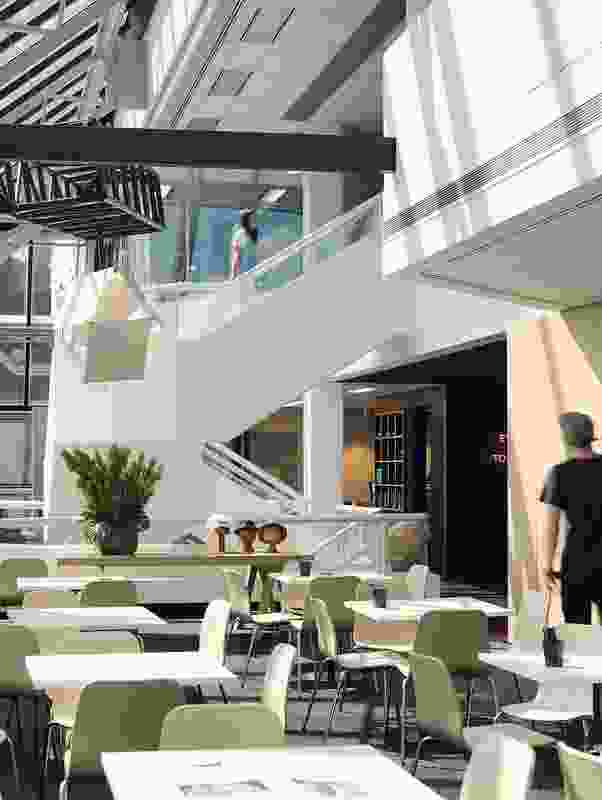 The staff canteen sits on the edge of the impressive void, allowing sight lines throughout the building. 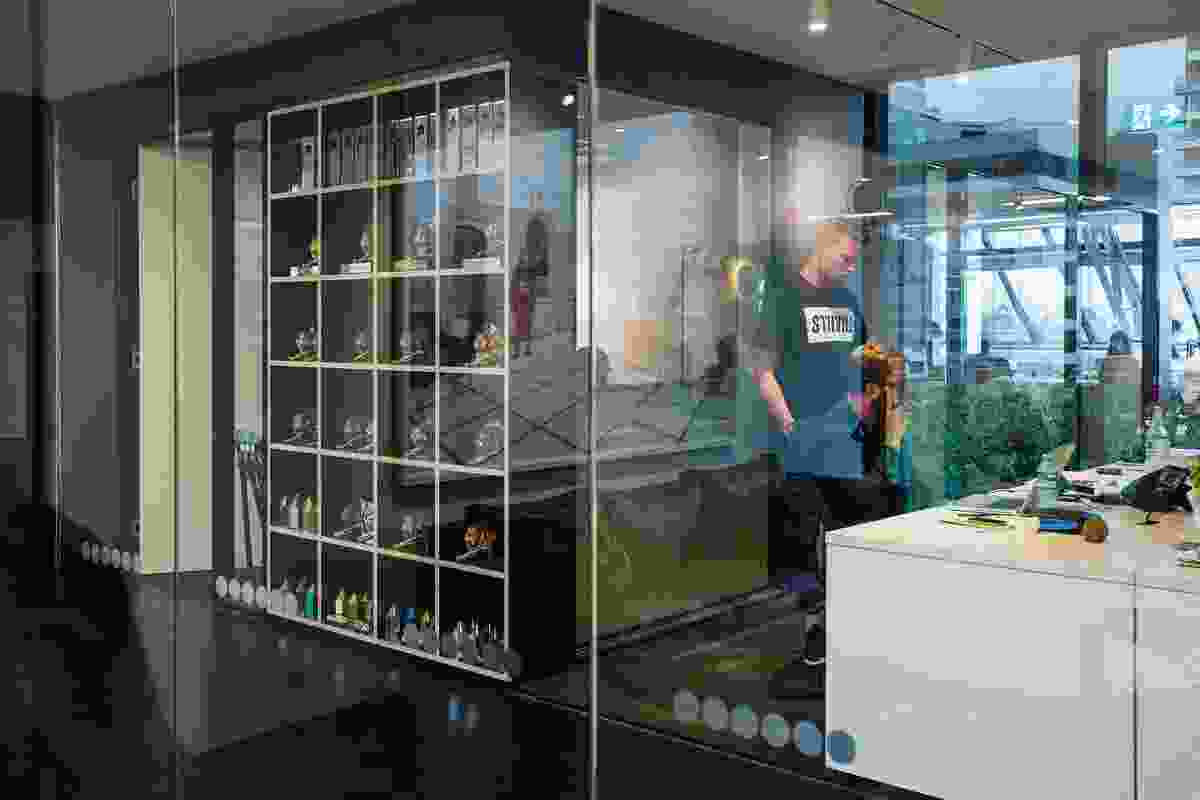 Incidental meetings are encouraged by the reconfiguration of previously closed-off rooms and dead end spaces. 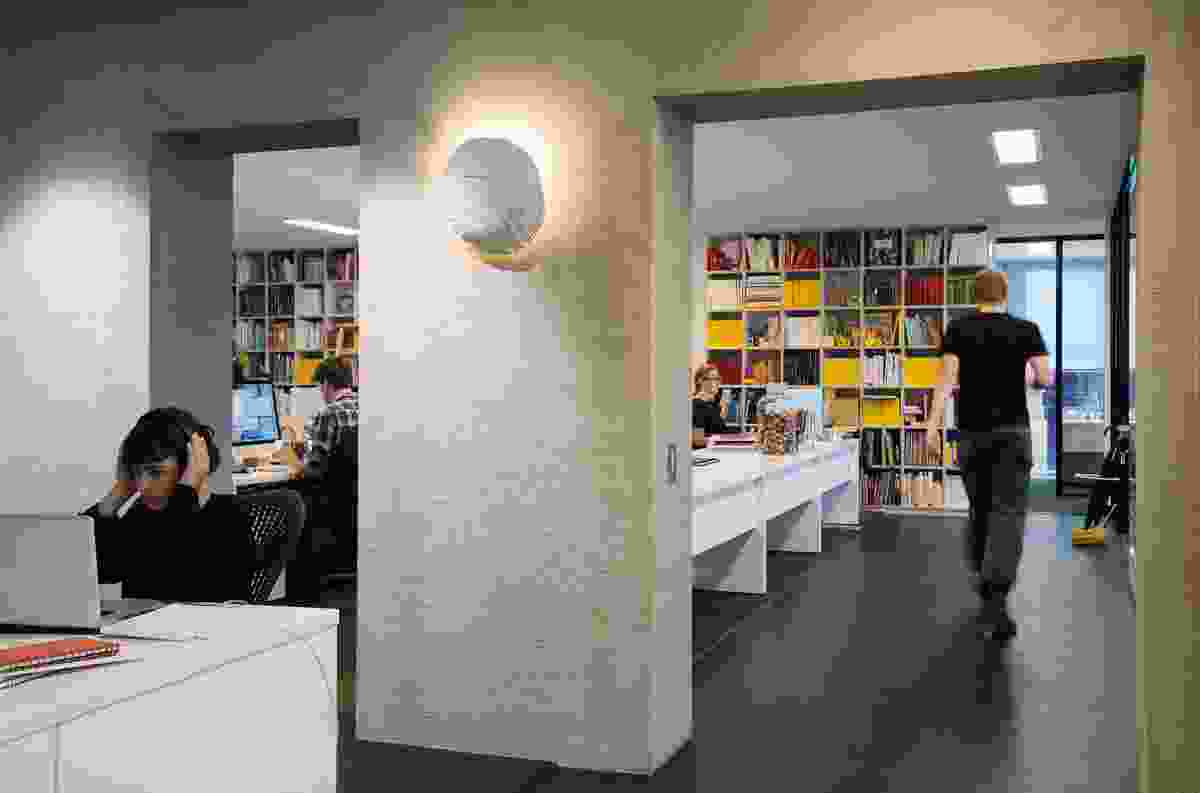 Crowned with moon installations by stephen hennessy, the external pavilion affords staff the psychology of an off-site retreat.

The pavilion’s interior can be configured into one large room or two smaller spaces.