This apartment, rich in detail and immersed in greenery atop a 1930s factory building in Surry Hills, is an urban oasis that sets an impressive precedent for apartment design.

With its cast iron hearth and connection to the outdoors, the living space has the feel of a country house. Artwork: David Larwill.

After nearly a century of growing pains, it could be said that apartment design in Sydney is finally reaching a stage of maturity. The first decades of the twentieth century saw the promising start of apartment design in the CBD and the eastern suburbs. Edgecliff, Potts Point, Elizabeth Bay and Darlinghurst have fine examples of well-designed and generously-appointed buildings. Notable examples are Kingsclere (Maurice Halligan and Frederick Wilton, 1912), Carinthia (Walter Leslie Nielsen, 1926) and Birtley Towers (Emil Sodersten, 1934). While there were some notable mid-century examples, such as 17 Wylde Street (Aaron Bolot, 1951), the apartment buildings of later decades – think of the brick boxes of the sixties, seventies and eighties – have left a legacy of mean-spirited, unattractive and poorly designed homes. However, the introduction of New South Wales Government’s apartment design codes in the early 2000s (SEPP 65) and their subsequent revisions over the past two years have brought about substantial change to the way apartments are developed, designed and occupied. It’s a change that can only be seen as an improvement. Evidence of this new maturity can be found in Cleveland Rooftop by SJB, an apartment that brings together the threads of adaptive reuse, green cities and experimentation in architectural design and interior detail.

This apartment is not the product of typical speculative development. The designer and owner, Adam Haddow, is a director of architecture at SJB, and has worked with the developer, Cornerstone, on numerous occasions. Adam purchased the rooftop on Cleveland and Co. – an adaptive reuse project of the Demco Machinery Company agricultural machinery factory – and set about envisaging an urban oasis. The two extant roof structures – the lift enclosure and overrun (now the main bedroom and study) and fire stair (now the third bedroom) – have been linked through the addition of a pavilion that forms the main living space and kitchen. Surrounding the apartment is a verdant garden designed by William Dangar and planted with Australian natives. The garden has provided a habitat for a variety of birds and an abundance of flowers for Adam’s bees. From the interior of the apartment glimpses of the city are filtered through the foliage. The proportions of the living space, the large cast iron hearth on stacked-granite slabs and the connection with the greenery outside give the room the feel of a comfortable country house. It is hard to believe that you are located on one of Sydney’s busiest streets.

Adam believes it is important that apartment living does not preclude the occupant from connecting with the outside. Every room has natural ventilation and the apartment’s key spaces, such as the vestibule, the shower room and corridor, are connected to the exterior with large skylights. This provides an opportunity to “see the sky and the day.” Large windows slide away into wall cavities and louvres allow for breezes to pass through. Despite the nonstop traffic of Cleveland Street below, the apartment is remarkably quiet and tranquil, testimony to a well-built envelope and correctly selected glazing systems.

The external architecture is secondary to the interior. This project has been conceived from the interior out. Ceilings are high, rooms are well proportioned and the material and detail is engaging. Adam saw that the Demco Machinery Company building’s interior by J. Aubrey Kerr had “pockets of ambition,” despite its functionalist nature and he tried to incorporate this spirit with the detailing of the apartment. Rough-finished materials such as concrete and granite are offset against smoother, more luxurious ones, such as plush carpet, velvet and marble. Particular attention has been given to the thresholds, where the juxtaposition of materials is played to its greatest drama. Adam sees these transitions as “very important,” as he believes that our experience of a space is generated as we move through it. At the thresholds we find experimentation with detail; this is where Adam could test out his design ideas before potentially applying them to other multiresidential projects in the future. He sees his home as one big experiment.

One of the most dramatic experiments is in the main bathroom, a tour de force of materials, light and space. Featuring generous amounts of Arabescato marble and full-height mirrors, the vanity area is a nod to the luxury of the Art Deco period. When passing through a marble-clad threshold to the shower, you are enveloped in vertically stacked teal blue tiles. Above the shower, a conical tube burrows its way up to the sky in a beautiful moment akin to the light funnels at Le Corbusier’s La Tourette, or to those in an Alvar Aalto-designed house. Scalloped-marble stairs snake around to take you to the outside bath, located in the garden.

As far as Adam is concerned, Sydney has the best apartments in Australia in terms of amenities. He believes this is due to strict government regulations, but also to the increased education of Sydney developers and purchasers in relation to quality design. He states that architects are also maturing, recognizing that multiresidential design requires a different set of skills and attributes to those needed for the design of a conventional freestanding house. It can only be hoped that the impressive precedent of the Cleveland Rooftop is disseminated into the wider stream of Australian apartment design. 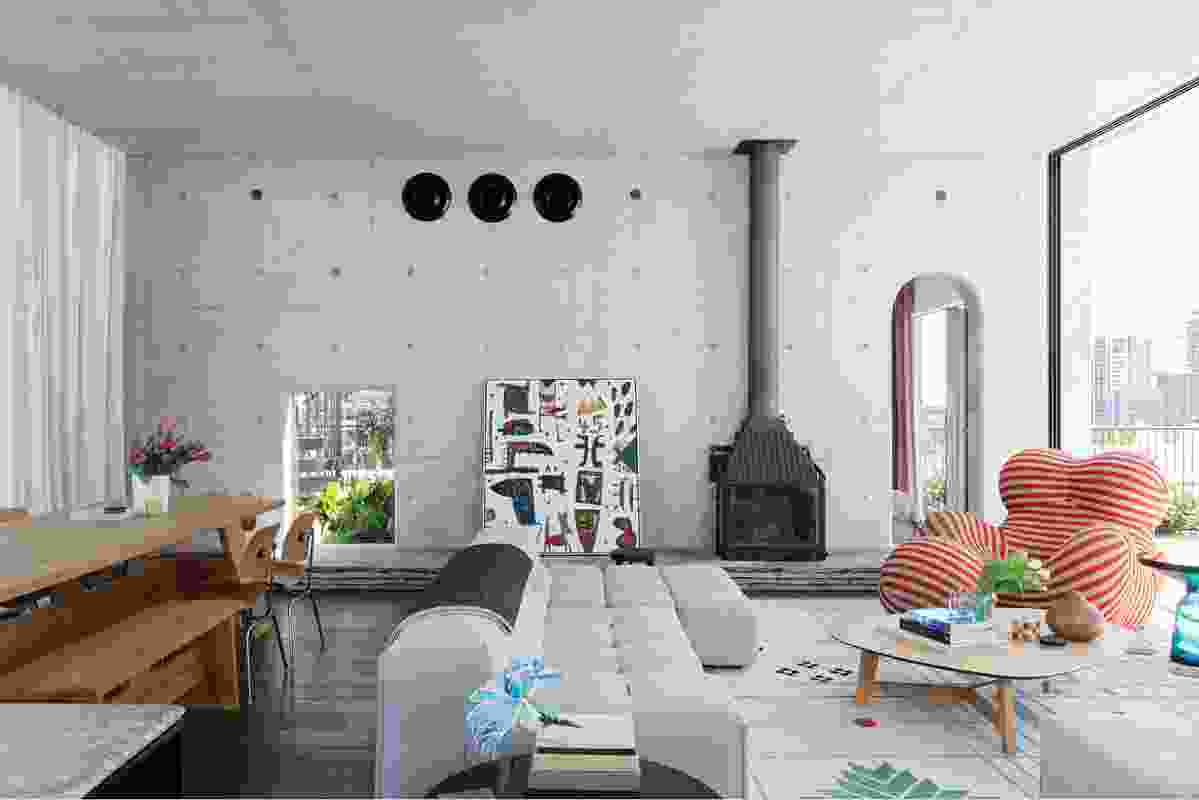 With its cast iron hearth and connection to the outdoors, the living space has the feel of a country house. Artwork: David Larwill. 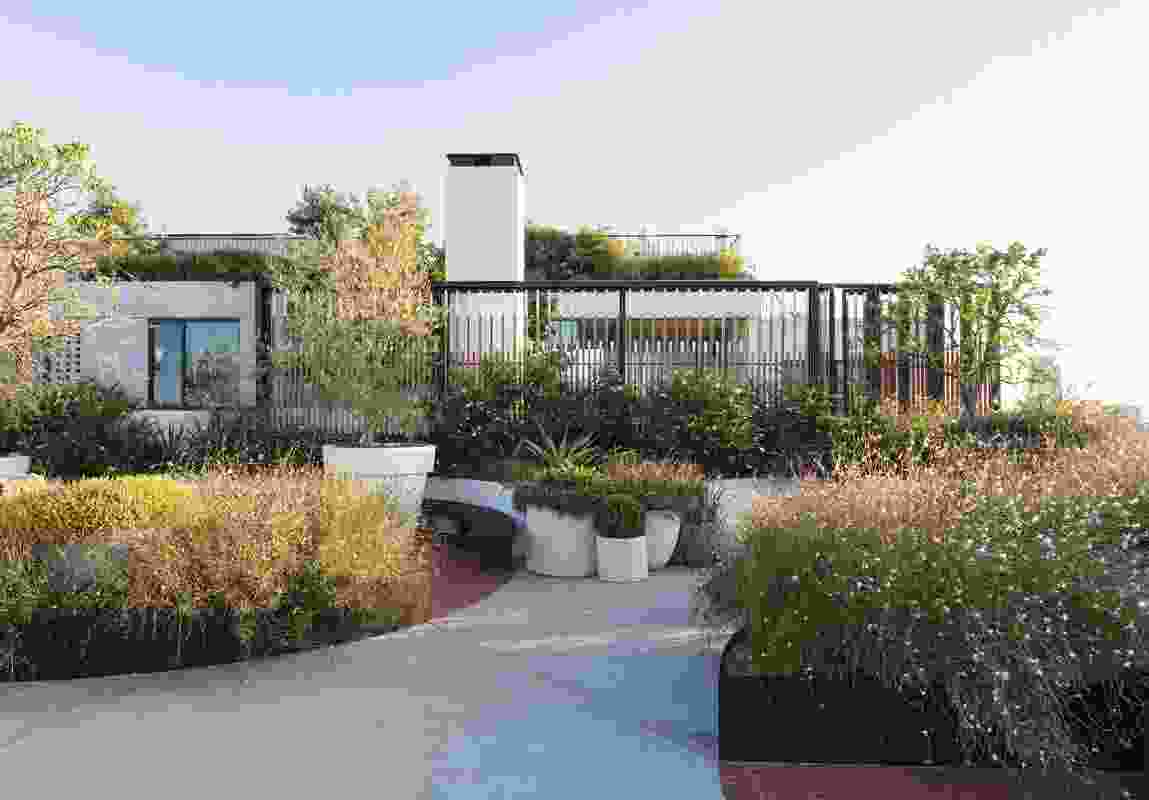 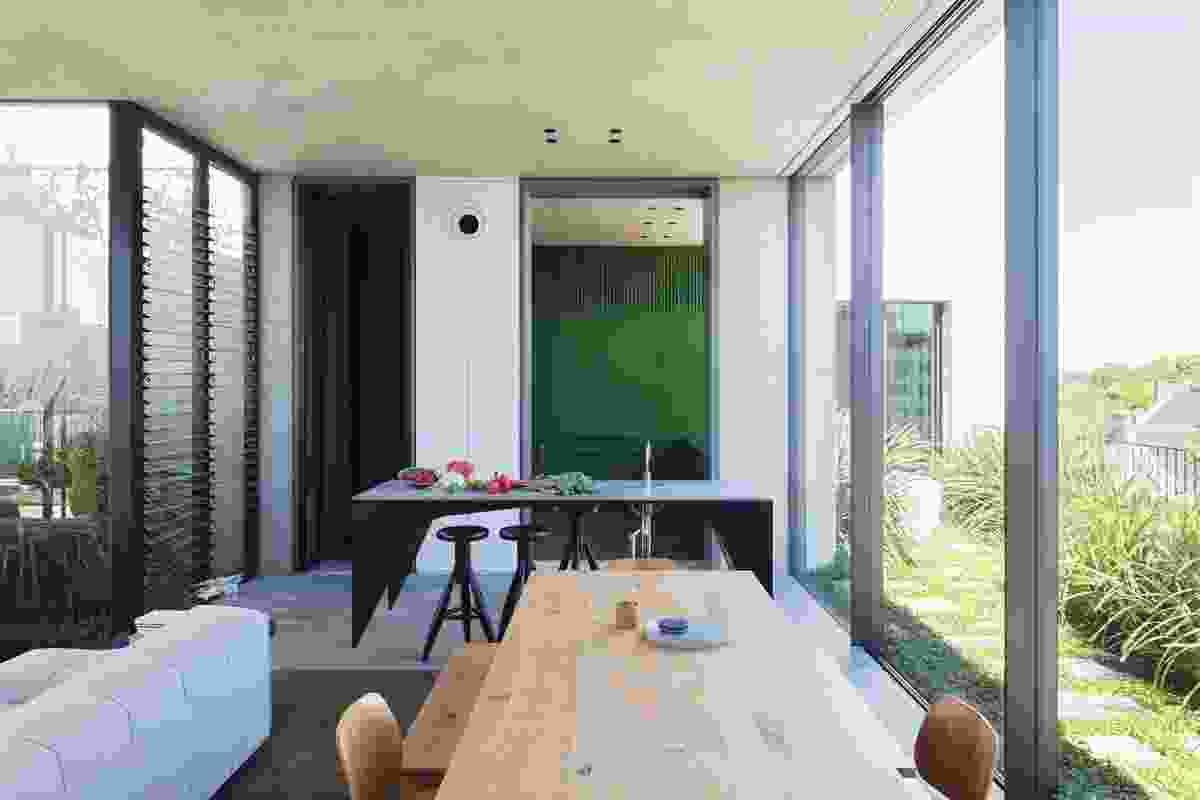 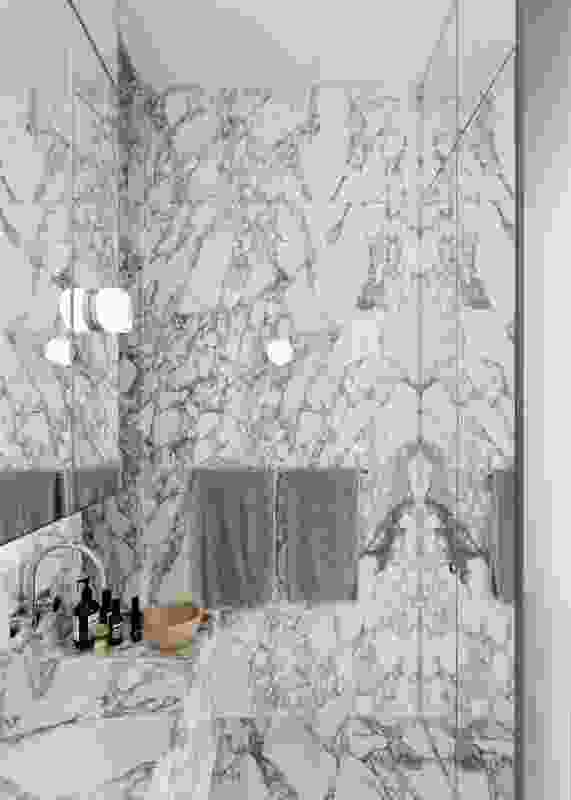 Featuring marble and floor-to-ceiling mirrors, the vanity area is a nod to the luxury of the Art Deco period. 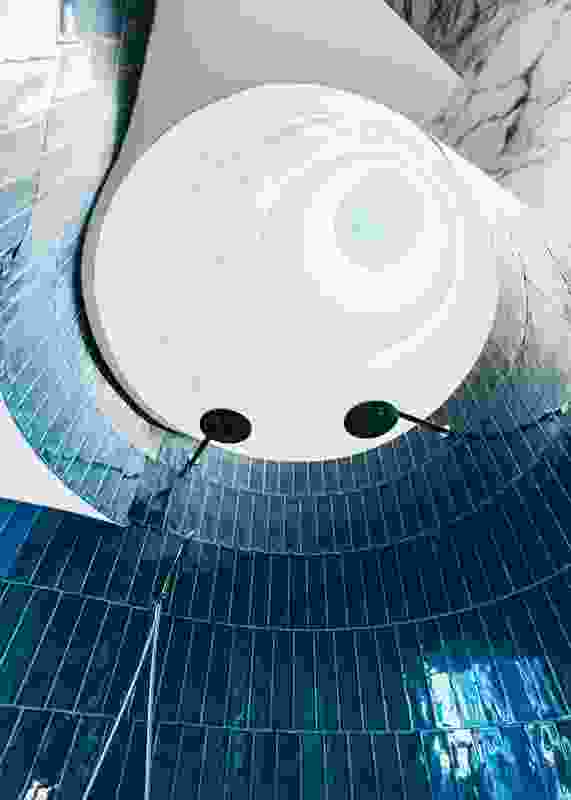 The skylight above the shower is a feature akin to the light funnels at Le Corbusier’s La Tourette. 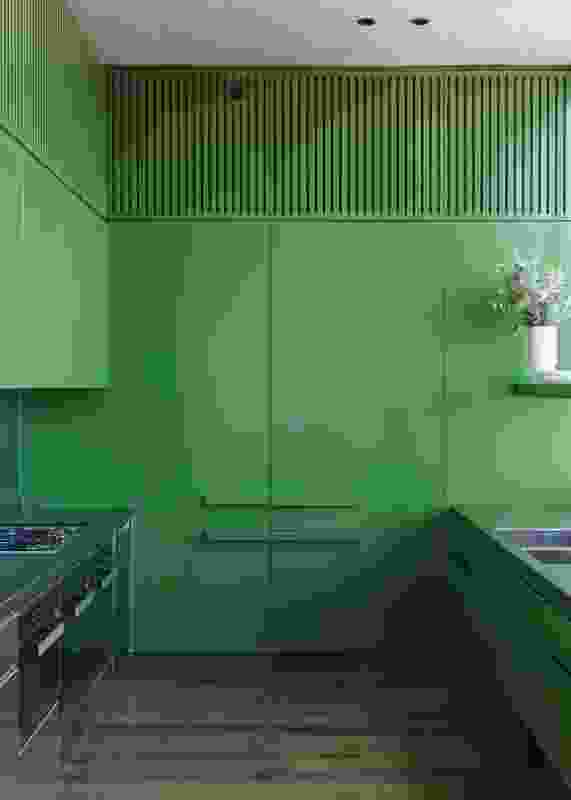 A bold experiment in detail, the mossy-green kitchen references the verdant garden while contrasting with the adjacent raw concrete. 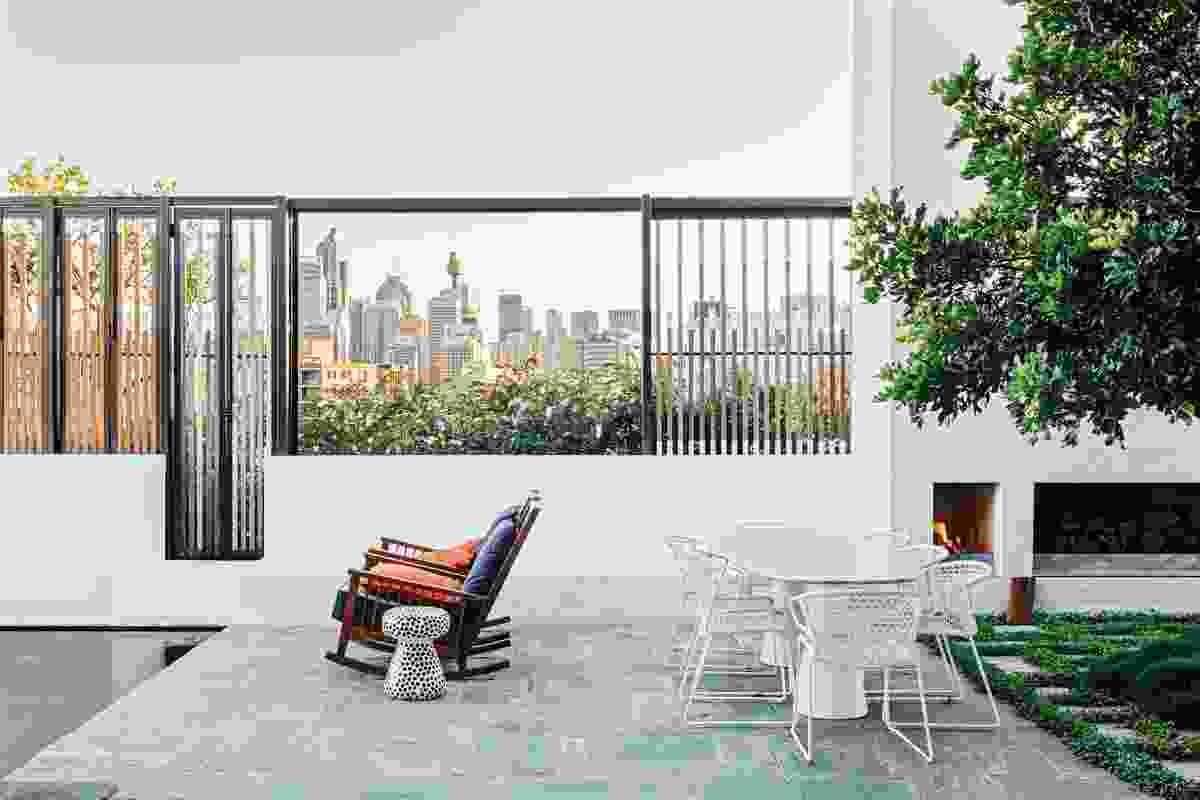 A patio area adjacent to a pool and skirted by greenery offers stunning views of the city. 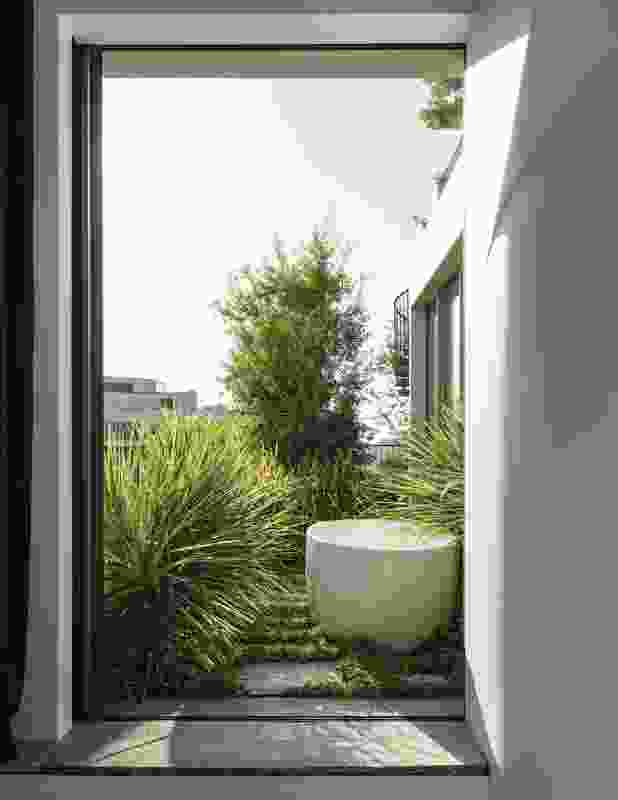 An outdoor bath provides an opportunity for reprieve and relaxation amongst the garden.