Fergus Scott and Peter Stutchbury collaborate on a Sydney house straddling the bush and bay at Pittwater. From the sandstone bedrock to its luminous canopy, the house is attuned to the elements.

The house forms an intimate connection with the landscape.

Fergus Scott Architects and Peter Stutchbury Architecture reprised a collaboration that began more than a decade ago to work together on the Cliff Face House. Before establishing his own practice in 2000, Fergus had worked in Peter’s studio. This project offered an opportunity to revisit the nascent ideas of the pair’s earlier work with the sharpened focus of an intervening decade of accumulated learning and experience.

The Cliff Face House draws itself tightly against a layered sandstone rock face at Pittwater, north of Sydney. The house faces away from the harsh light and brutal on-shore weather that typify the ocean side of the peninsula, and towards the calmer inland waters and the canopied points of the Ku-ring-gai Chase National Park. The project, decisively set below the adjacent street level, is allowed to develop an intimate relationship with its very particular landscape. Importantly, this positioning also allows the existing houses upslope to retain their connections to the landscape.

On the landward side, one descends through the house – and time – beside the stratified seams of the rock. This layered structure is mirrored at a landscape scale on the water side, where one moves beside a corresponding suite of landscape strata, from the shimmering band of sky, past the muted foliage of the national park, to the smooth mirror of the inland waters and then down to the intricate markings in the broad tidal flat that chronicle the daily tides.

The house is suspended between these strata. On the cliff top, a parasol roof tames the skylight and captures rainfall. A luminous polycarbonate vault suffuses the primary living areas with a delicate light that responds to the softened tones of the landscape outlook. The main bedroom is also on this level, so that it is possible for the client and her husband to independently occupy this part of the house while accommodating their sons’ families on the floors below.

On the intermediate level, the cliff face itself forms the inner wall of the house. The rock profile is sculpted and three-dimensional. A shelf that peels off the face at mid height instinctively guides movement along a hall to two bedrooms. A floor is hewn from the rock to provide access to the laundry and study.

On the lowest level a further two bedrooms and a second living space open onto a garden and foreshore reserve. Here, the cliff thrusts forward into the bathroom space. The raw surface of the rock, replete with growing moss and ferns, becomes the shower wall, with fine copper plumbing lines fixed directly into the face. Where the stone is too wet and fractured to expose, its environmental benefits are harnessed. A series of circular ventilation holes allow cool air from a wet, dark plenum to move up along the sandstone face to the uppermost level, naturally cooling the house. Although concealed, the plenum space itself is extraordinary. Large clay seams that were discovered in the rock face during construction have been infilled with cream-coloured brickwork that has been painstakingly contoured to meet the undulating geometries of the natural rock.

To use a natural cliff face in such a direct manner, with all the uncertainty it brings to the construction process, requires a leap of faith for all involved. In this case, the bravura of the architects was more than matched by a highly experienced, irrepressible and utterly engaging client, and a dedicated and patient builder. This collective skill and care is evident in every detail of the house. Every part of the house has been scrutinized and laboured over, from the beautifully constructed hardwood frame and trusses, the fine steel structure and the sharply finished galvanized metal jamb trims that ensure nothing gets between viewer and landscape, right down to tiny, bespoke brass handles.

The construction system uses paired hardwood columns with junctions formed from inter-sleeved galvanized steel plate. The system allows the language of connection to be reduced to its essence: timber is absolved of the need to make complex three-dimensional joints as the steel works tirelessly between the columns, allowing the structural connections to appear calm and effortless.

The western facade is not a facade at all, but rather a continuous verandah that links all the rooms on each level. This space is enchanting, offering each room an immediate and direct connection to the outdoors, while its dark formply soffits and perforated copper screens dispense with the unwanted effects of low, penetrating western sunlight.

When the shutters pass across each other, an extraordinary moire effect magnifies some of the perforations, creating shifting patterns of micro and macro circles, neatly summarizing, in the thickness of a single copper sheet, the essential architectural achievement of the house: the union of the intimate tactility of the rock face with the immense power of an extraordinary landscape. To occupy this very privileged space between them is nothing short of a delight. 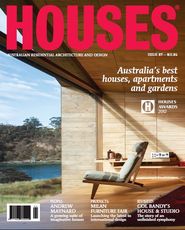 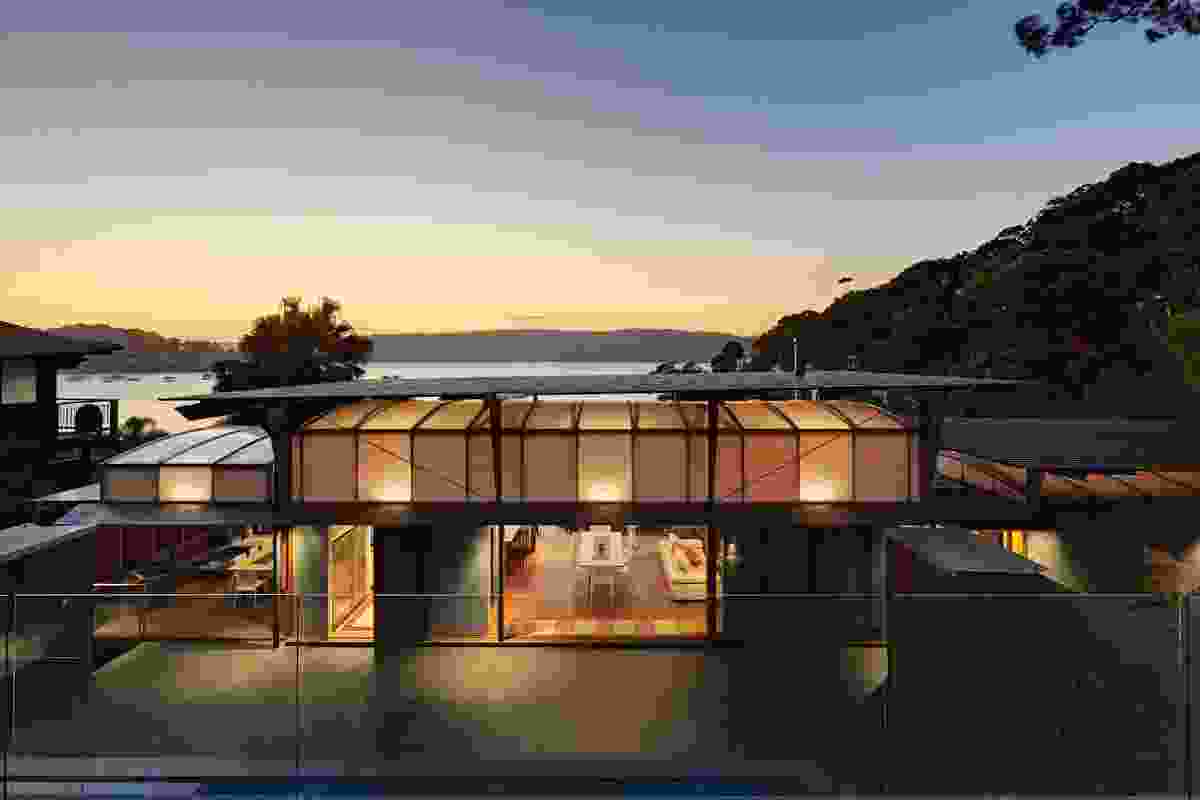 The house forms an intimate connection with the landscape. 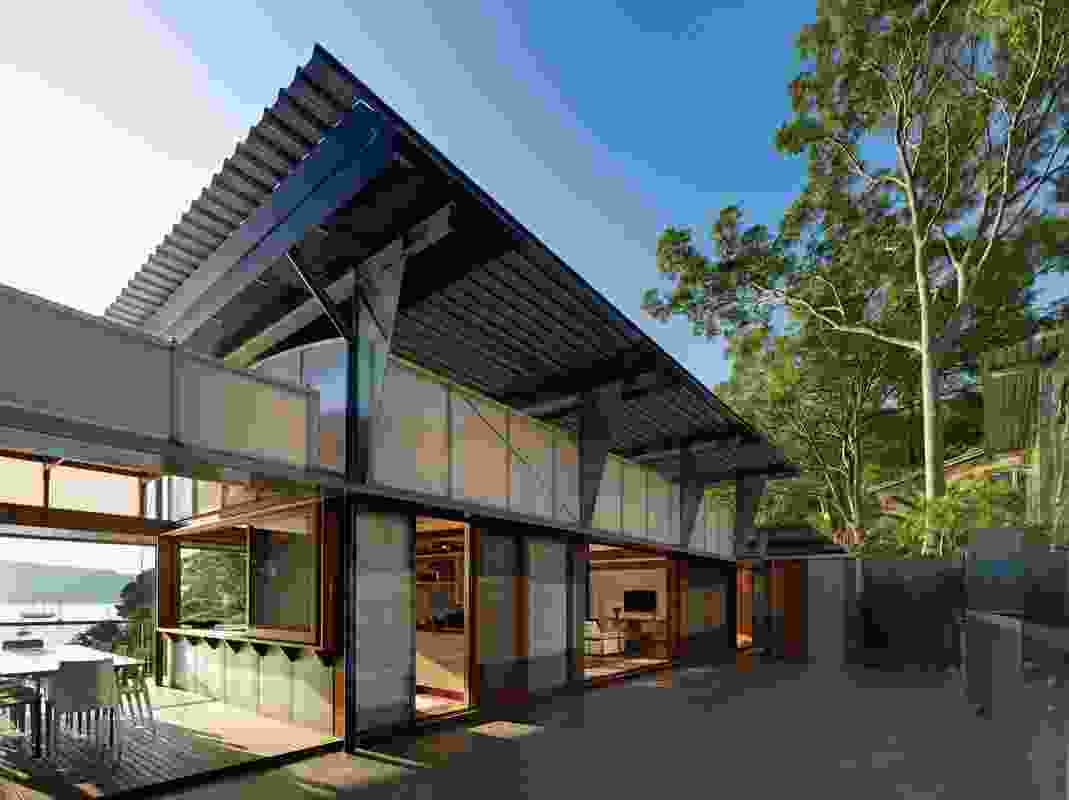 A parasol roof is pitched above the polycarbonate vault to screen sun and harvest rain. 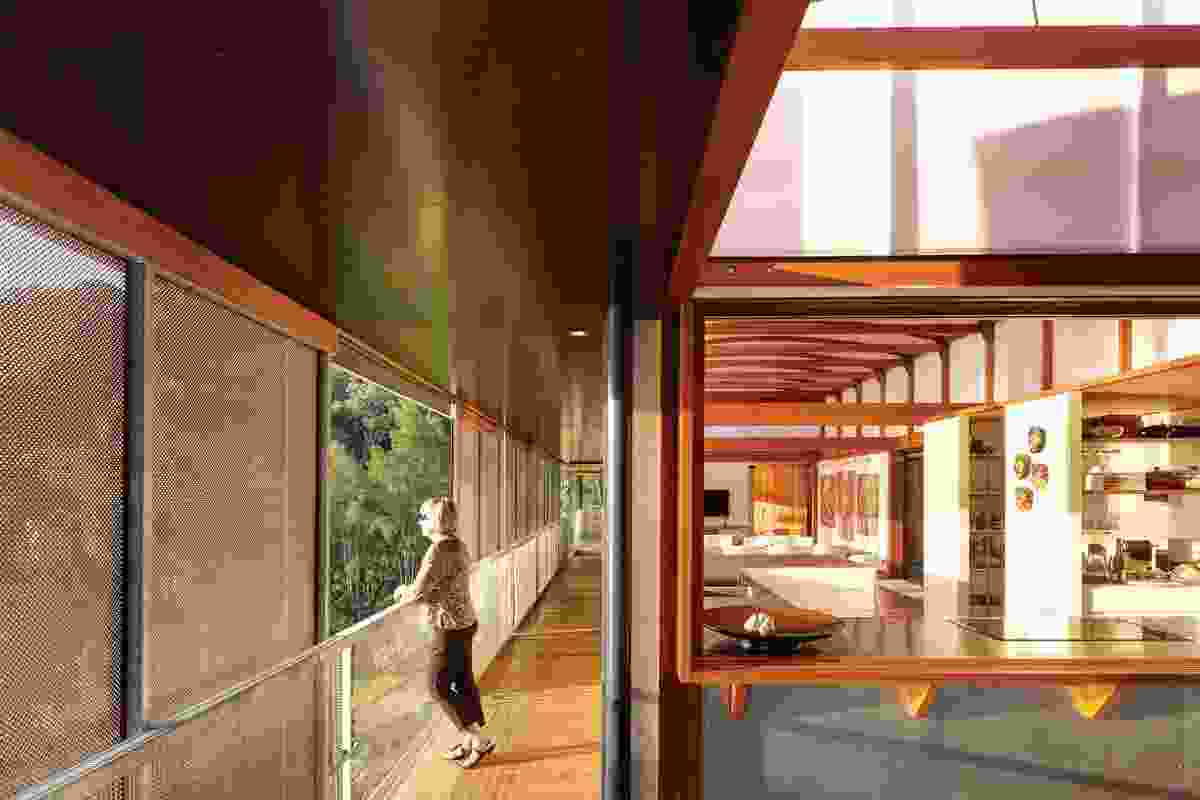 The verandah gives all rooms a direct outdoor link. 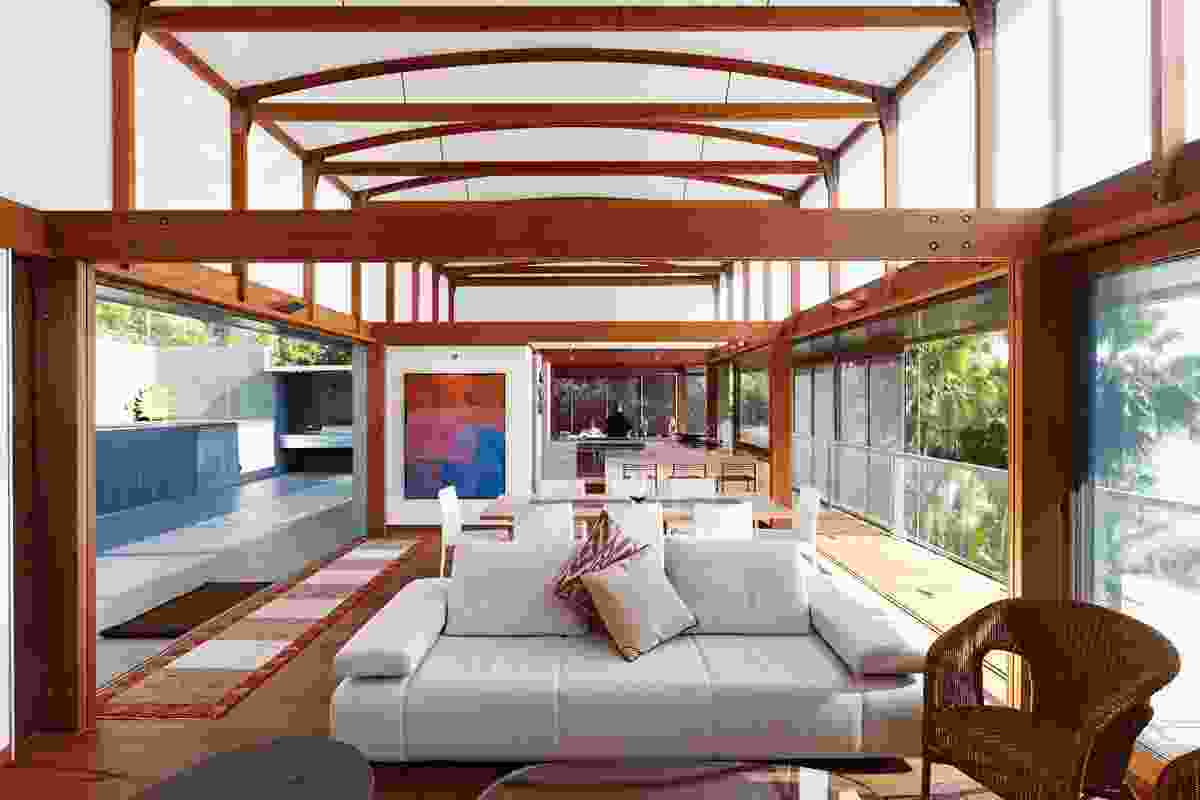 The living areas are lit by a polycarbonate vault. 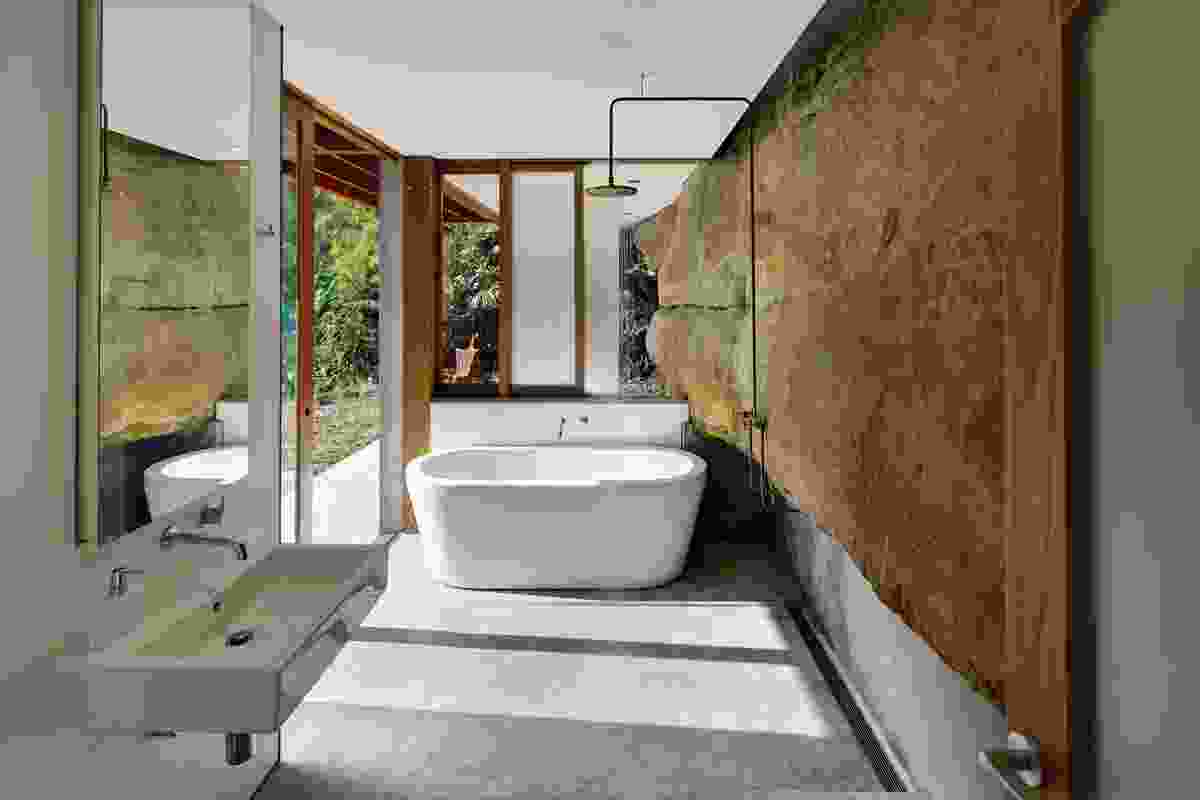 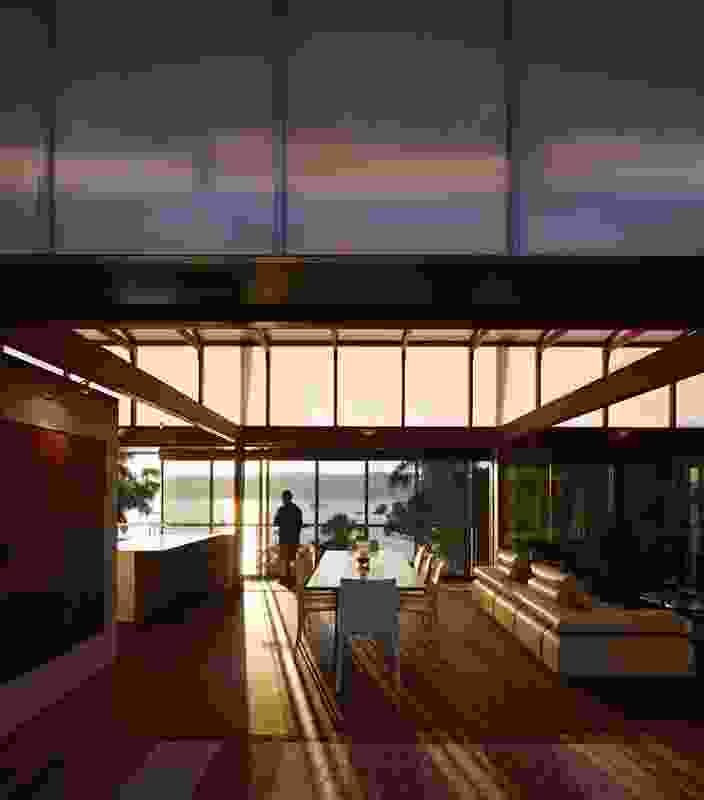