For decades, the broader architecture profession has held back from advocating for the ecological health of the planet while others in the built environment sector have taken the lead. Ken Maher argues the time has come for all architects to raise their voices and lead on the issue of climate emergency.

The Australian Institute of Architects at the Global Climate Strike on 20 September.

It seems Australia is experiencing the beginning of a “perfect storm.” Fed up with political inaction, school children, young people, their parents and grandparents have become climate change activists. The recent Global Climate Strike inspired hundreds of thousands of concerned citizens to flood the streets of our cities. The voices of children are demanding accountability and action from the generation in charge – that is each of us. The chorus of voices of young Australians is joining millions internationally inciting interest in this critical issue. It is clear momentum is building. Increasingly, organizations, corporations and city leaders are rightly declaring a climate emergency.

Architects have a huge leadership role to play in this conversation as the design of buildings, our cities, public places and infrastructure is such a fundamental agent in addressing these enormous challenges we are facing.

On 23 September, the United Nations Secretary General, Antonio Guterres, in leading the UN Global Climate Summit in New York, declared, “It’s time to come up with a plan.” Australia’s leaders declined to speak up, to our continuing national shame and neglect.

Global greenhouse gas emissions are reaching record levels and show no sign of peaking. The last four years were the four hottest on record, and winter temperatures in the Arctic have risen by 3°C since 1990. Drawing on further evidence that the time to act is rapidly evaporating, the summit focussed on the key demands including: no new coal, no fossil fuel subsidies, making polluters pay, and reaching net zero carbon by 2050. The invitation to the 195 nations committed to the Paris Agreement was to propose concrete, realistic plans to enhance their nationally determined contributions by 2020, in line with reducing greenhouse gas emissions by 45 percent over the next decade, and to achieve net zero emissions by 2050.

It is reassuring to see the summit’s focus on citizens taking action, mobilizing people worldwide and ensuring young people are represented across all its aspects. This includes acting on the social and political drivers that protect workers and vulnerable groups, who are most impacted by the effects of climate change.

The time is right for architects to again take a leadership role, to transform the popular perception of a focus on aesthetics and style, and a privileged clientele, to one of caring for public interest and the survival of life on the planet.

In parallel, the World Green Building Council has released a key report on the need in the built environment to pay attention to “Bringing Embodied Energy Upfront,” under the global “Advancing Net Zero” project.This report is critical in creating a conversation around the value and importance of embodied carbon, with the aim of creating and stimulating market action and demand for transparency, improvements, and verification of embodied carbon reductions.

Of course, architects’ concerns regarding the health and survival of our planet have been a topic of research, discussion and advocacy for decades – but only at the margins of the profession. I recall the writings when I was a student back in the late 1960s, including biologist David Suzkuki and Paul Ehrlich predicting catastrophic consequences if the ecological health of the planet continued to be ignored. Landscape architect Ian McHarg advocated for working with nature rather than blindly accepting the prevailing belief in domination. Little in urban development has changed despite thoughtful architects developing a growing interest in the consequences of human habitat.

While over the decades architects have joined initiatives to address concerns over the impacts of our work, they have been very much a minority. Design is a fundamental agent to addressing these enormous challenges we are facing.

Initiatives and movements have emerged within the built environment sector, forging key organizations, including the Green Building Council of Australia (GBCA) and the Australian Sustainable Built Environment Council (ASBEC).

Some architects have played critical roles, yet the broader profession has held back, and others in the built environment sector have generally taken the lead.

ASBEC has evolved into an influential evidence-based advocacy body with a strategic focus on energy and emissions, cities and infrastructure, sustainable housing, and more specifically, tangible building code reform. Recent publications include “Low Carbon, High Performance” (2016) and “Built to Perform” (2018) have been influential in stimulating policy and the regulatory frameworks so critical for industry reform.

Participating in these broader industry-based activities is important for the architecture profession, as is participating in research for the evidence base around carbon and the built environment. The recently concluded CRC for Low Carbon Living has been a significant initiative lead by Deo Prasad at UNSW. There is, nevertheless, a need for a greater focus on what agency architects can bring through design processes and actions.

A current generation of architects is demonstrating an interest in the broader context of their work. The time is right for architects to again take a leadership role, to transform the popular perception of a focus on aesthetics and style, and a privileged clientele, to one of caring for public interest and the survival of life on the planet. The current crisis of confidence in developers and the building sector also creates an opportunity. Questions of quality, which have been a recent and welcome focus at the design stages, clearly need to continue through the procurement and construction phases and this is relevant to the environmental and social performance of our buildings.

The Architects Declare movement has emerged at a critical time with the recent launch attracting currently some 650 participants and strong support from the Australian Institute of Architects.

All architects must raise their voices on these issues with clients and community to lead on the issue of the climate emergency. For the sake of our children it is our duty to be vocal and reasoned in our advocacy. The personal is political – we need to change our individual lives and practice in response to the climate emergency. If we listen to those young voices like Greta Thunberg and all act collectively we can give young people hope and reshape the future.

The time has come for architects to make the transition from advocacy to action.

Ken Maher AO is President of ASBEC, and former national president and 2009 Gold Medallist of the Australian Institute of Architects. 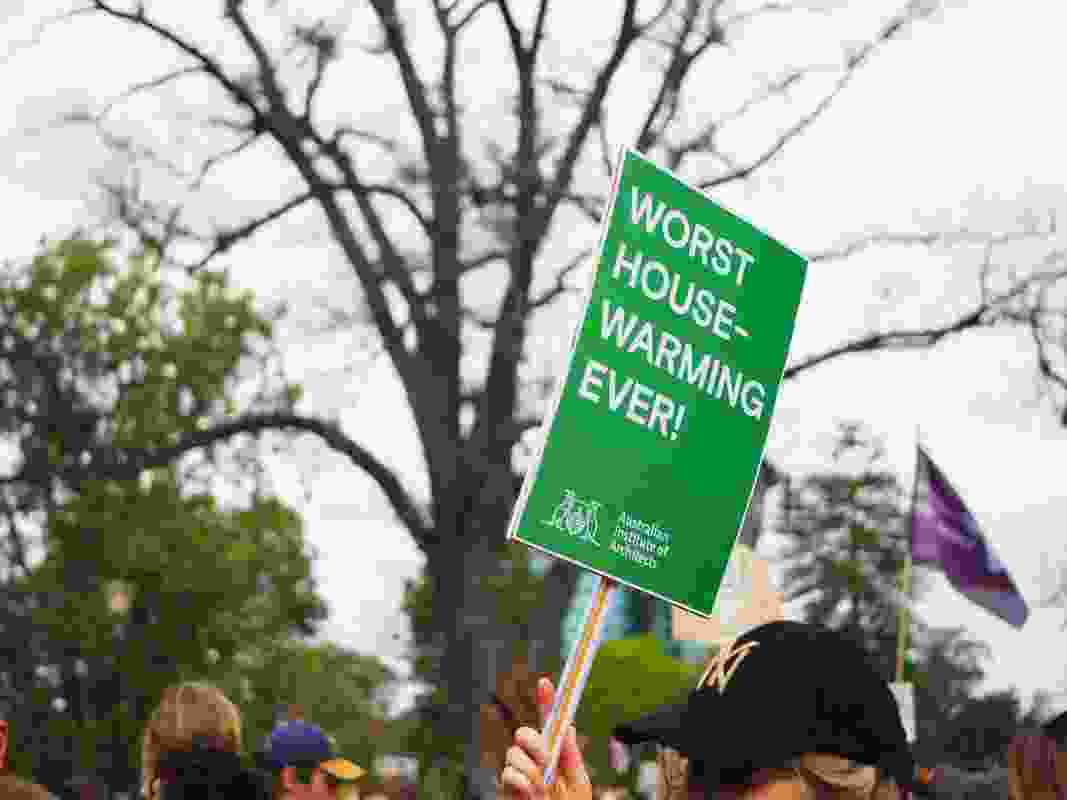 The Australian Institute of Architects at the Global Climate Strike on 20 September.