Modernism of a contemporary kind: The houses of CO-AP

The distinct yet complementary methods of CO-AP Architects principals Tina Engelen and Will Fung are united in the work by the practice, bridging design generations to make a marked contribution to Australian architecture.

Will Fung and Tina Engelen at the CO-AP studio in Sydney.

Tina Engelen has been a prominent design figure in Sydney for most of her life. Her family founded the Danish Design Centre (Dedece) in Sydney in 1978. She grew up immersed in Scandinavian design culture and remains, along with her two brothers, a director of Dedece. After studying interior design at Sydney College of the Arts, Tina joined Herbert Ypma’s highly influential Interior Design magazine as a feature editor and helped chronicle Australia’s burgeoning local design scene in the 1980s and ‘90s. She formed Daffodil with designers Marc Newson and Danny Venlet, a practice that, though short-lived, created such landmark projects as the Burdekin Bar at the bottom of Sydney’s Oxford Street – their interior for the project long since, and sadly, demolished.

By 1995, Tina had co-founded Engelen Moore with architect Ian Moore and was helping to define a new era of Sydney living. Their layered approach to interiors paired with rational architecture struck just the right balance, earning the practice awards and press coverage around the world. An apartment designed by Engelen Moore became a highly desirable commodity, fostering a local market for design-driven residential developments. The firm lasted almost a decade before the partners split. “It was very much a brand and when you’ve got your name on the brand you take it much more seriously,” Tina says of Engelen Moore. “I felt very strongly that it was representing me as a human. So, it was just this fantastic relief to finally go into a quiet little bubble and approach projects quite differently.”

The bubble she refers to is CO-AP Architects, a small practice co-founded in 2005 by Charles Markell and Will Fung (who is also an Engelen Moore alumnus), at which Tina is a now a principal. Will, who studied architecture at UNSW Sydney, worked with Tina in the earliest days of Engelen Moore before heading to the Netherlands to spend almost two years working with Wiel Arets Architects. He had then returned to Sydney, and Engelen Moore, but before long set up his own practice in a small studio in Surry Hills.

Having developed a friendship and a collaborative working relationship, Will and Tina began to work on projects together post Engelen Moore. “I need collaboration,” Tina explains. “I’m not a one-woman band and I suppose, because I’m a designer who loves architecture, I like to work with architects.”

In CO-AP, the pair saw an opportunity to start afresh and to work in a different way – more quietly and against the idea of architecture as a brand. Engelen Moore bore a strong signature, “a kind of dogma,” says Will. “We have an architectural approach that leads to an aesthetic.” Will and Tina focused on the brief and satisfying the particular needs of each client. They let the work speak for itself. Publishing wasn’t a priority for the pair. “There was no urgency,” Will says. “We were mulling away, gestating, finding out who we were.”

It was several years before one of their projects received attention – a house in the inner-western Sydney suburb of Annandale, with an exceptionally long and narrow site. In that scheme, a two-level Victorian terrace at the front of the property is kept intact, while beyond it, a new extension is quite unlike the Sydney terrace house renovation one might expect. A long line of enclosure zigzags down the length of the site, creating triangulated interior spaces and pockets of garden against the backdrop of a six-metre-high neighbouring wall.

The unexpected angular geometry of Annandale House (2011) creates dynamic, fluid spaces, both inside and out. There are expanded points in the corridor for kids to play in, for instance, or to accommodate a sofa or dining table, all the while plenty of service and circulation space is accommodated in an opposing spine. In places, the folding line of enclosure pulls the structure far enough away from the high northern wall to let in sunlight without sacrificing amenity. It’s a clever piece of planning. Upstairs, one of several bedrooms skews across the plan, taking the private space away from the neighbouring apartments so as to reduce issues of overlooking.

Tina and Will, an architectural generation apart, have an easy understanding of one another’s strengths. Tina confesses to being more orthogonal in her thinking and says that Will’s angular shifts go against her natural instincts, but, beyond that first impulse, they create excitement. Will, a generation younger, has honed a clear design signature during years of running his own practice, but says he sometimes feels constrained by his architectural thinking compared to that of Tina, whose design approach is more unfettered.

“I like a clear diagram and a clear vision,” says Will. “I always go back to the original principle and sometimes that makes me undercook things. Tina looks at the detail; she’s good at putting herself in the clients’ shoes.” Clearly, there’s a balance, and a lot of trust between the two, that works.

At Rooftop Pavilion (2014), atop a heritage apartment building, creases in the architecture transpose emphatically from the plan to the section. The home’s roof – folding, origami-like – is hardworking in its interactions with the highly urban, inner-Sydney setting, dropping to provide privacy and enclosure before rising up to an open sky. The British client hadn’t been inculcated with the more standard Sydney desire to open everything up to the vista. This allowed the designers to instead frame considered views, and to create a greater variety of indoor and outdoor spaces under the canopy of the roof.

An earlier project for empty-nesters, Point Piper Apartment (2011), transformed a 1940s three-bedroom apartment by extracting almost all of its internal walls. Non-structural walls were removed to convert the waterfront home into an open, flexible dwelling, with a generous main bedroom and a guestroom primarily for the owners’ visiting grandkids. From every corner, harbour views slice through the plan, which is anchored by the only structural internal wall, containing a fireplace and now reclad in limestone.

Will’s distinct approach to geometry is even more pronounced at Woollahra Courtyard House (2018), a new dwelling in a heritage area with close neighbours. Parallelograms, in void and volume, infuse the plan with subtle dynamism. Practically, the skewed bedroom space on the upper level pulls a wall away from a close neighbour in order to provide a bit more breathing space. On the lower levels, angular voids with clerestories add complexity, light and a seductive geometry to the interior without overwhelming it.

In the work of CO-AP, materials are often left raw or unadorned. Zinc roofing, corrugated metal, fibre cement sheeting, plywood panels, concrete, blackened or painted steel – each element is clearly expressed with good modernist detailing. There is also a sense of luxury, perhaps most apparent in the studio’s significant renovation to a historic property in Bondi, Moreton Manor (2018). Here, a monumental bath is carved from a single block of marble and the kitchen encompasses the space once occupied by four large rooms at the core of the original 1850s cottage. Extensions in concrete and steel have a volumetric grandness to them that matches the historic property’s stature. Rigorous planning is evident in the arrangement of new spaces, threading deftly through the old. CO-AP has flipped the orientation of the living rooms from south to north, with new indoor and outdoor spaces giving the house the contemporary amenity that a family needs.

For a long time, after Charles left CO-AP in 2006, Tina and Will ran the practice as a duo. Now, more than a decade later, the practice is a group of seven with no plans to get much bigger. “I’ve never wanted a big practice,” says Will. The three generations in the office all enjoy the differences between them in thinking and approach, and the ways in which that contributes to a small collaborative studio.

An ongoing dialogue about Australian architecture is important to the CO-AP team and continues to inform its path. Tina grew up in Sydney’s Northern Beaches and Will in Canberra, both loci of Australian modernism in unique ways. As Will says, they are definitely looking back “to the late ‘60s and ‘70s, Pettit and Sevitt housing, and the Sydney School.” Both Tina and Will give a huge amount of credence to Michael Dysart, Ken Woolley, Harry Seidler et al. “It was that whole generation who actually focused us on being Australian,” Tina explains.

CO-AP’s work represents modernism of a contem-porary kind. If it has a signature, it’s not obvious. Like all good architecture, each project is driven by the specifics of the site and the particularities of both the client and brief. The respective backgrounds of Tina and Will fuse into a holistic, assured and sophisticated response to every brief – each new project is a discovery, and an opportunity to quietly get on with their practice. 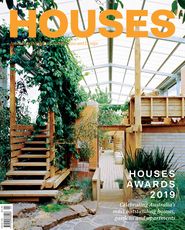 Modernism of a contemporary kind: The houses of CO-AP 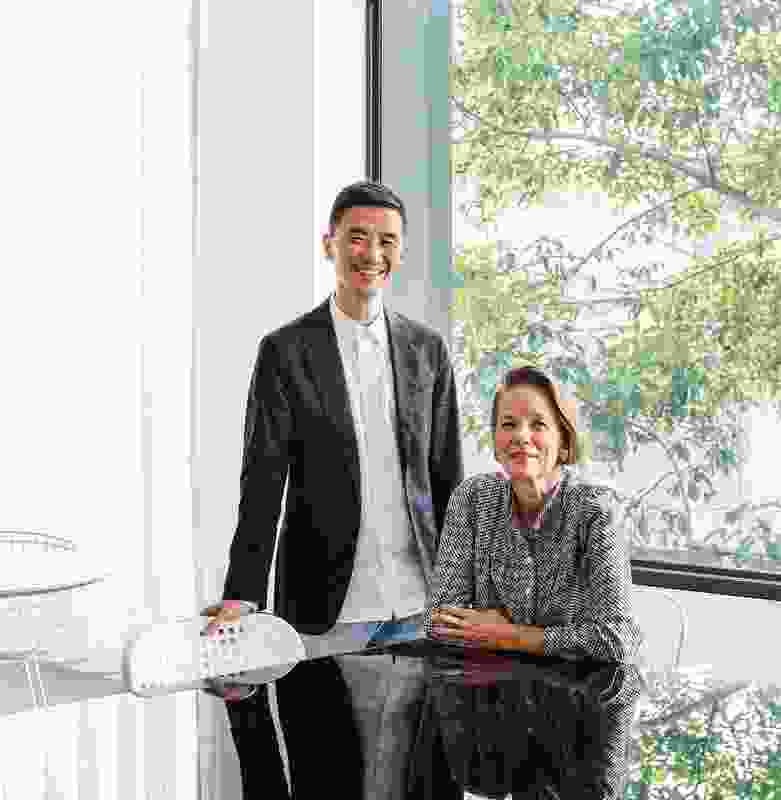 Will Fung and Tina Engelen at the CO-AP studio in Sydney. 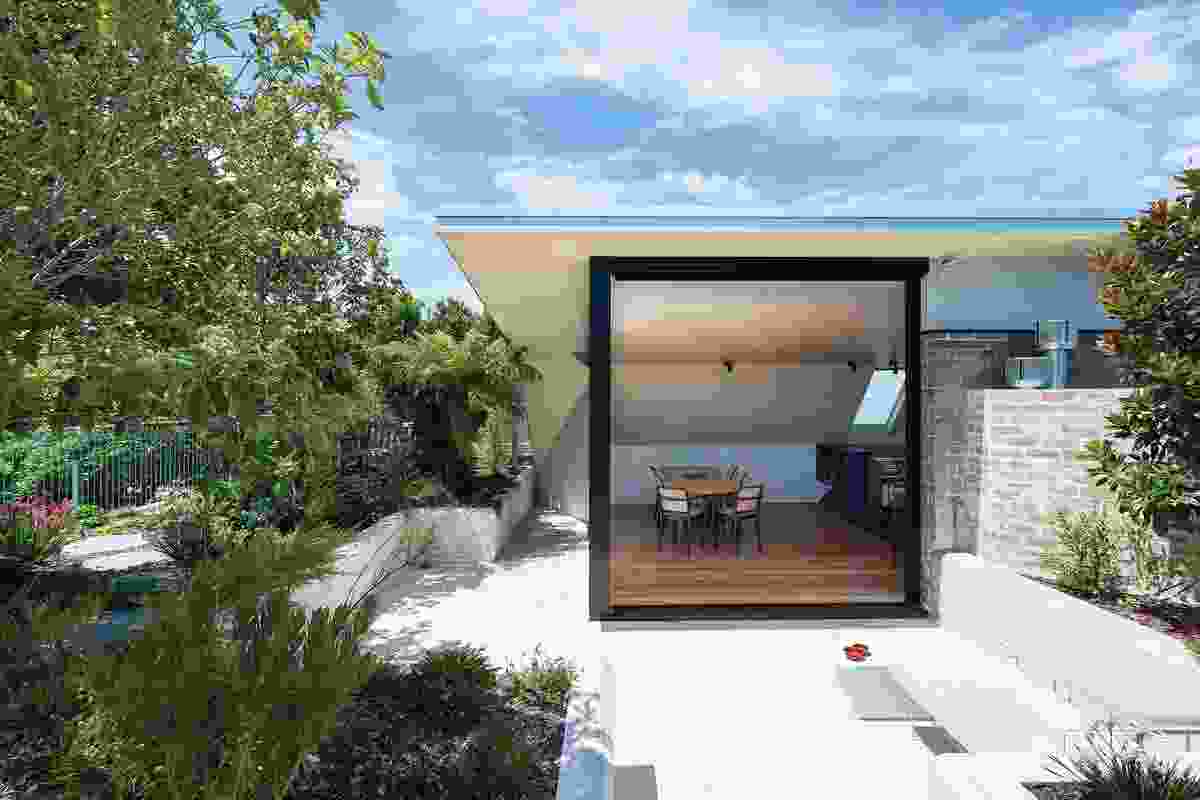 Shirking the common design move of capturing expansive vistas, the roof form at Rooftop Pavilion is shaped to frame only select views. 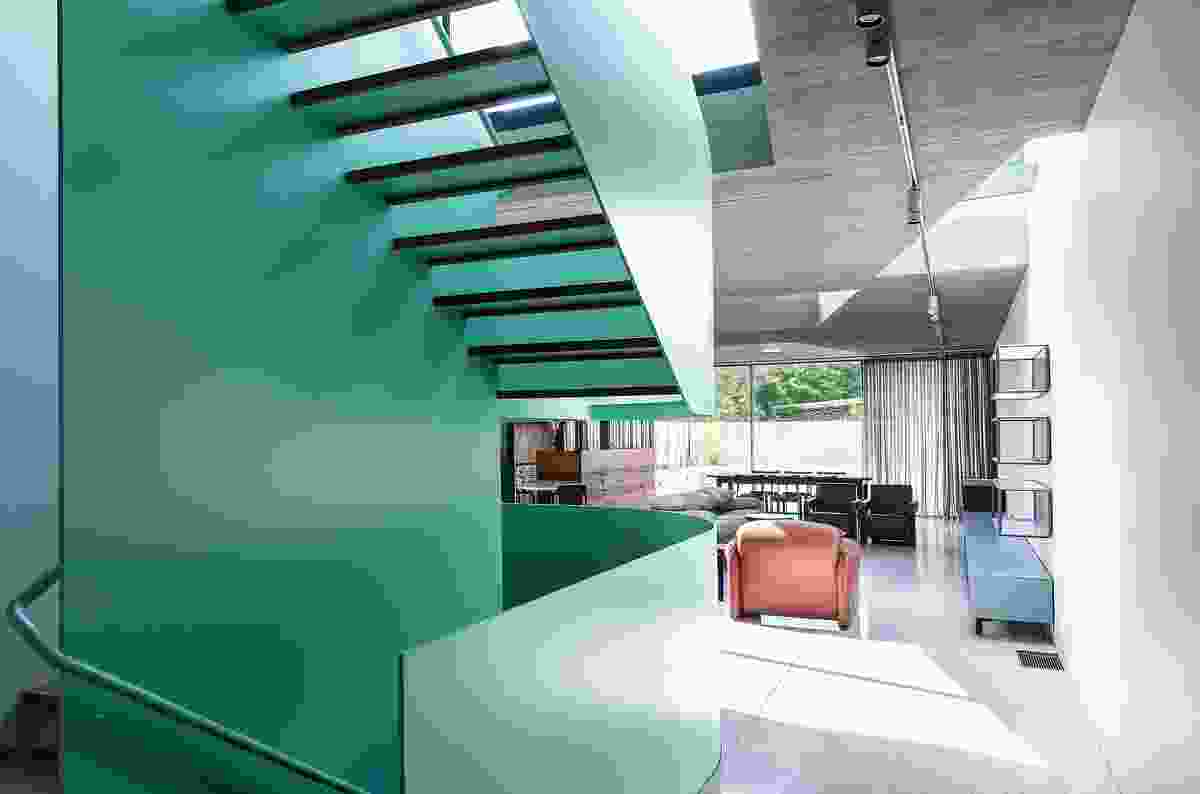 CO-AP’s signature approach to geometry is expressed at Woollahra Courtyard House, where angled skylights are carved into concrete. 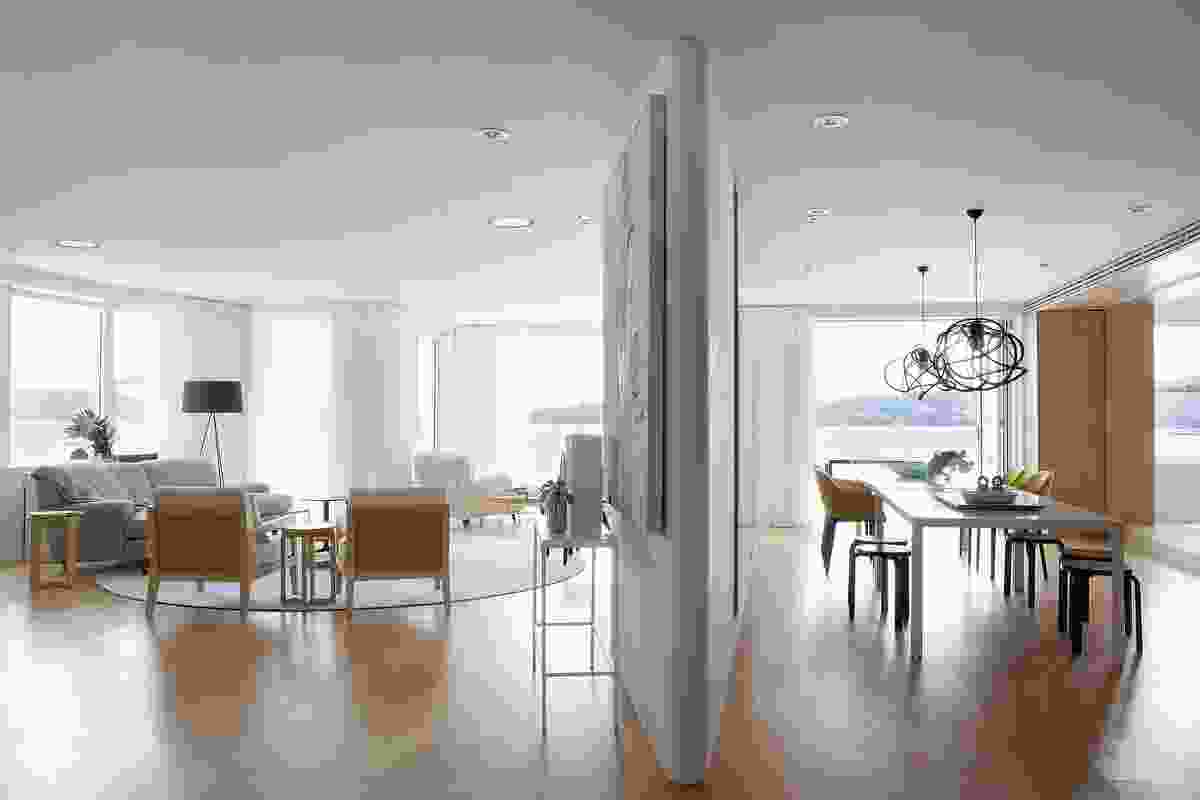 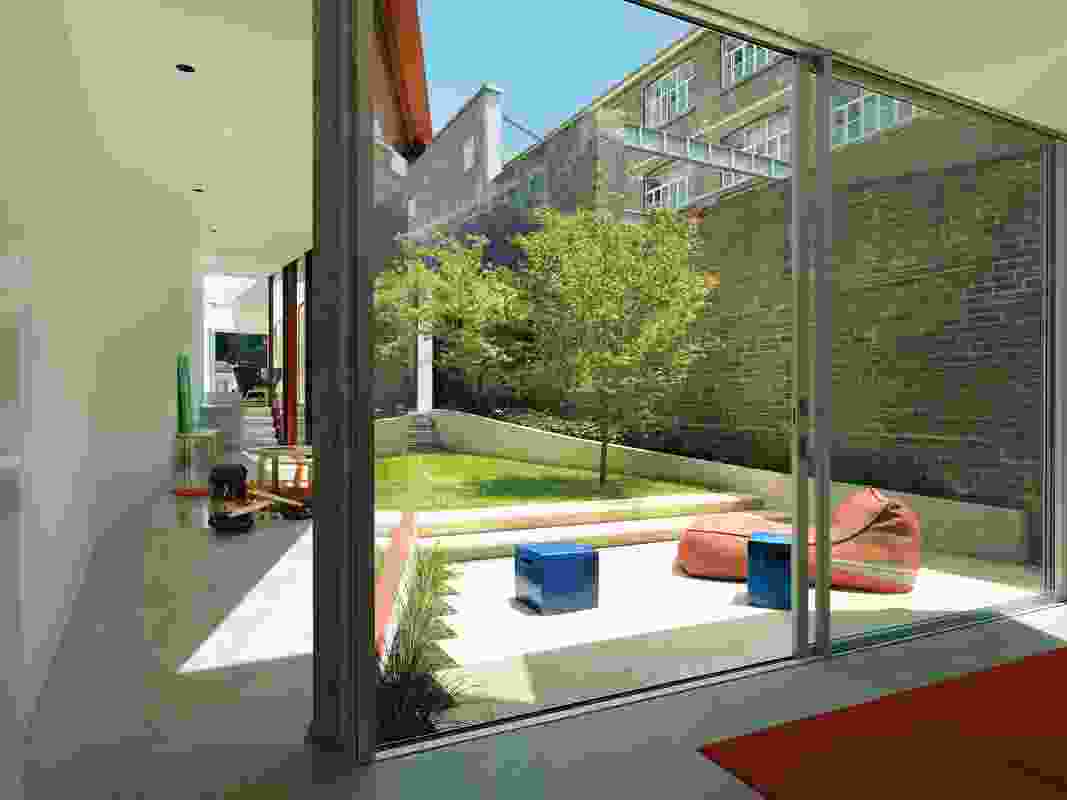 The design for Annandale House saw a long zigzagging enclosure added to the rear of the property to create dynamic indoor and outdoor spaces. 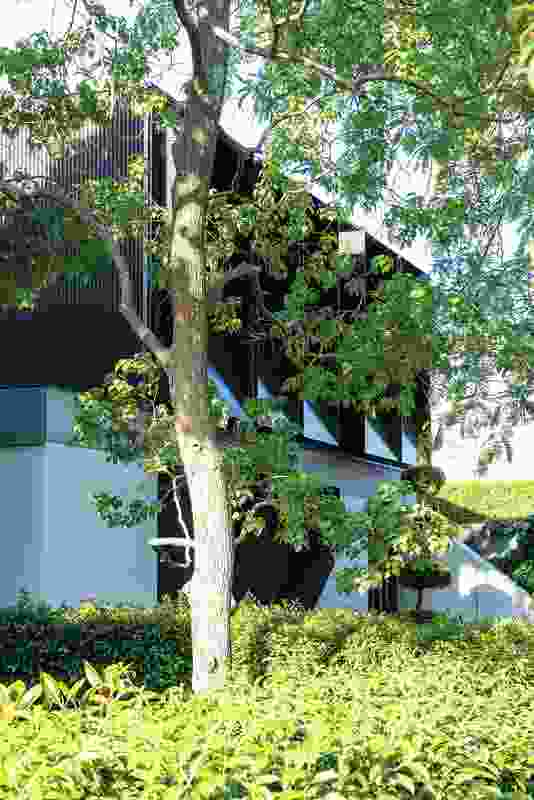 The fenestration at Woollahra Courtyard House responds to the rhythm and form of the neighbourhood’s historic streetscape. 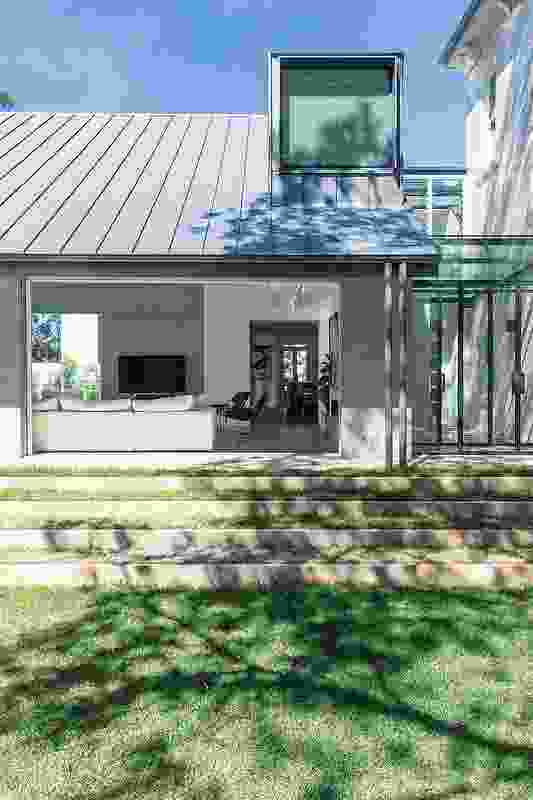 High-quality materials, such as zinc and marble, are left raw at Moreton Manor – a design decision befitting the significant home. 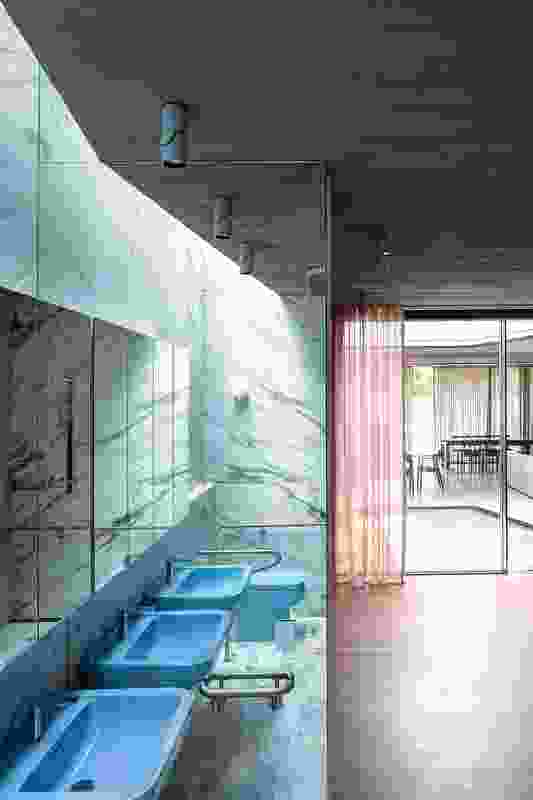 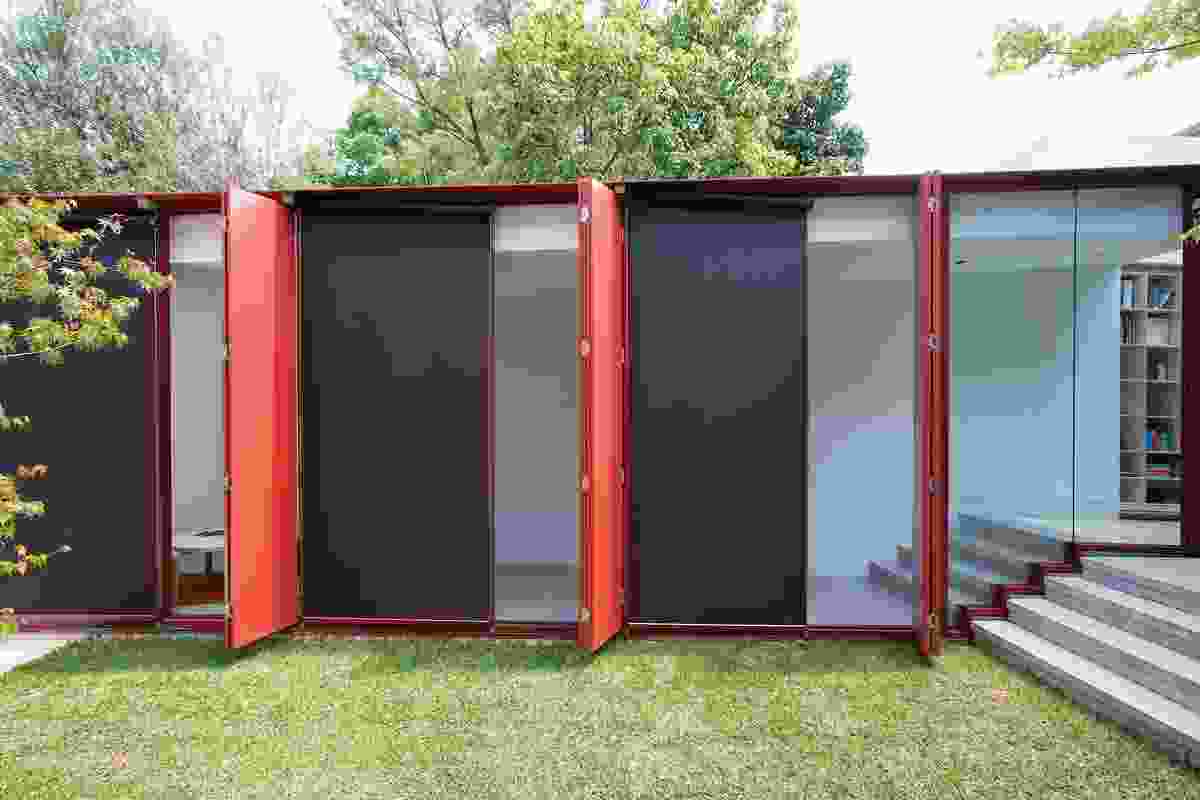 The first of CO-AP’s projects to attract public attention was Annandale House, an addition to a narrow terrace in Sydney. 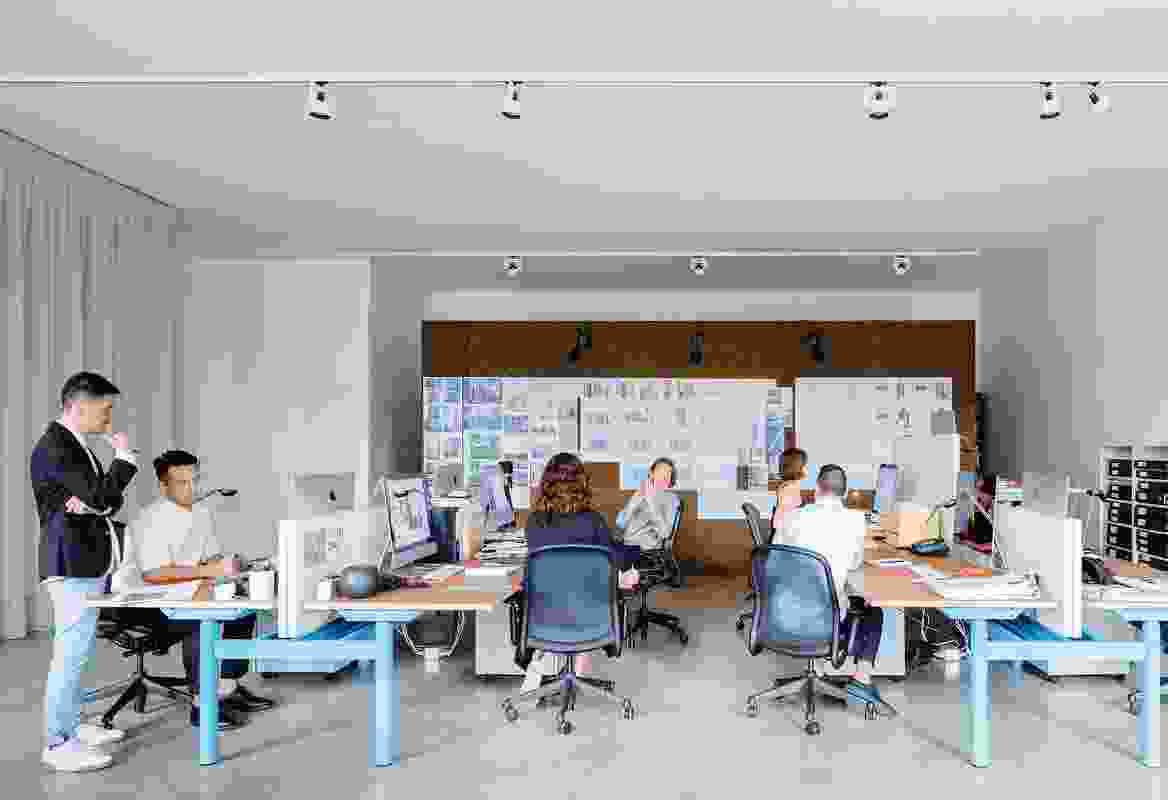 Diversity in age and approach among CO-AP’s relatively small team makes for a dynamic studio culture.