Each room of this new home opens up to pocket-sized courtyards and views to the sky.

The “bricks and mortar” nature of a home means it can have many different occupants over its lifespan, changing each time to suit the way the occupant inhabits the space. In the best examples, this bequeaths society with a direct link to our cultural heritage. In the worst examples, there is conflict between the original intention of a building, and how we live today. Jason Gibney, founder of Jason Gibney Design Workshop, confronted the latter situation in the rebuild of his coastal semidetached home in the Sydney beachside idyll of Bronte.

The way in which beachside living was conceived nearly a century ago does not match our contemporary vision. Jason’s modest house is perched on the high side of a quiet Bronte street with glimpses out to the ocean. However, the interwar semidetached house typified the worst qualities so often found in this housing model – long, dark corridors and rooms that faced a neighbouring fence, with no connection to the views. Jason was client, designer and to some extent builder. He had the liberty to experiment with this design, searching for a solution that maximized contact with the external environment, while simultaneously providing privacy from the very large and very close neighbouring houses. The approach needed a complete refresh of the semidetached model. The house was raised to a base level, allowing for a clean slate approach for a large part of the project.

Jason’s first move was to sacrifice overall square metres in favour of solar access and privacy. Many of the surrounding buildings occupy every millimetre of their respective sites, hogging views and light. Jason pulled back the form of his two-storey building, opening up every room to pocket-sized courtyards and views of the sky, dispelling the dark ghosts of the house’s previous incarnation. It also provides a complexity to the streetfront massing of the house, replicating “the beachside topography” of terraces, steps and rock formations of the area. The facade is finished in an all-natural mineral-based render that doesn’t need painting, so it will gradually patina with exposure to the elements. The entry of the house is from an offset path that leads to a vestibule, rather than straight into the long, dark corridor that used to be there. From this point, one can see sky through the entry’s eye-level window and, looking down the corridor, the backyard at the rear of the house. Though these views are not expansive, they are carefully choreographed so you never lose sight of the exterior.

The main corridor is lined with birch-faced ply panels. These conceal different functions such as a laundry, storage and a staircase. The wax-sealed flooring is made from the home’s original Baltic pine, re-used on top of the existing joists. Off the corridor is the children’s playroom – a cosy cubby space with a pop-out bay window that shields the view of the neighbouring property but provides views to the sky and the rear. The study shares a courtyard with the living space, giving the latter a double aspect, something that wasn’t possible in the old house.

The new section of the house is marked by a change in floor finish – pine gives way to polished concrete. Instead of an on-grade connection to the exterior, Jason has created a seating ledge, making the living room “sunken.” This gives the living room a sense of intimacy but also removes the need for a small patio and retaining wall. The view looks out to the grass and then to the studio garage, which is clad in western red cedar battens.

The upper floor houses the bedrooms and has views of roofs planted with local coastal plants. The main bedroom’s ply-clad ceiling folds up like an origami-inspired vault and the room has views out to the ocean. The house’s dance between openness and privacy is most evident in this room – when lying in bed, the occupant is afforded views out to the water through carefully placed embrasures in the balustrade.

This project is an excellent example of good design being placed above big design. The house is decorous in its relationship to the street and its neighbours, but uncompromising in providing its occupants with the perfect manner in which to enjoy a contemporary beach lifestyle. 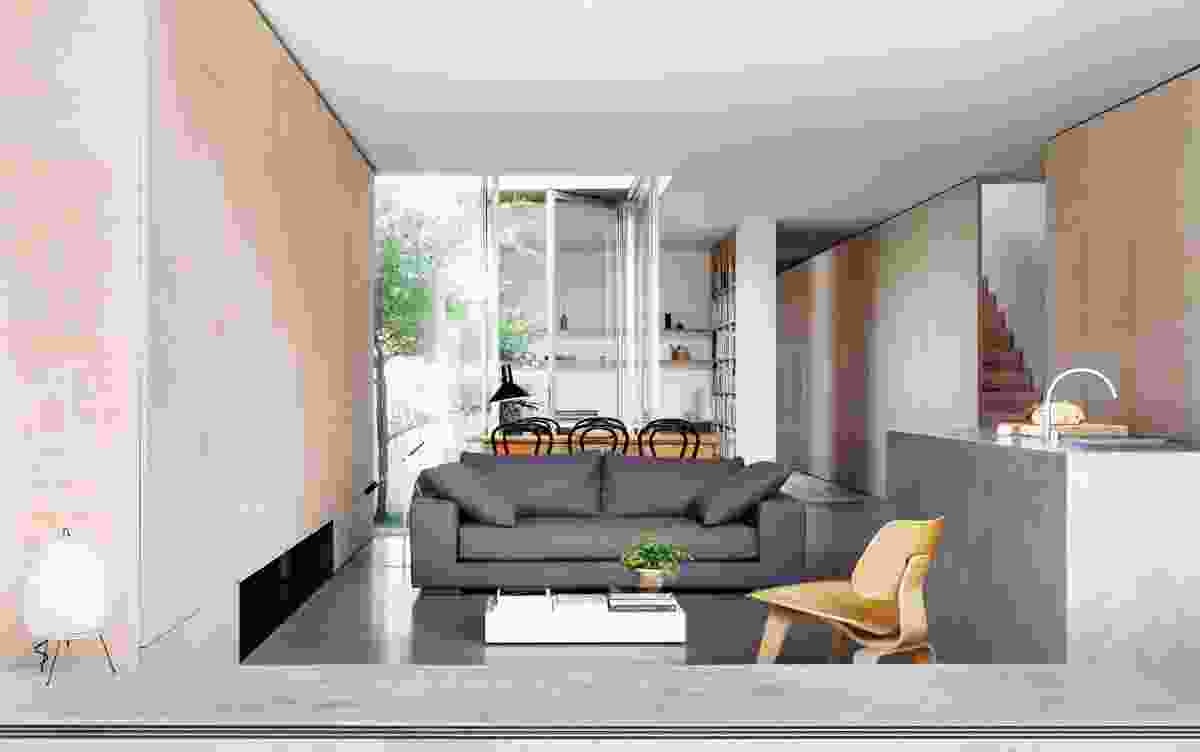 Each room of this new home opens up to pocket-sized courtyards and views to the sky. 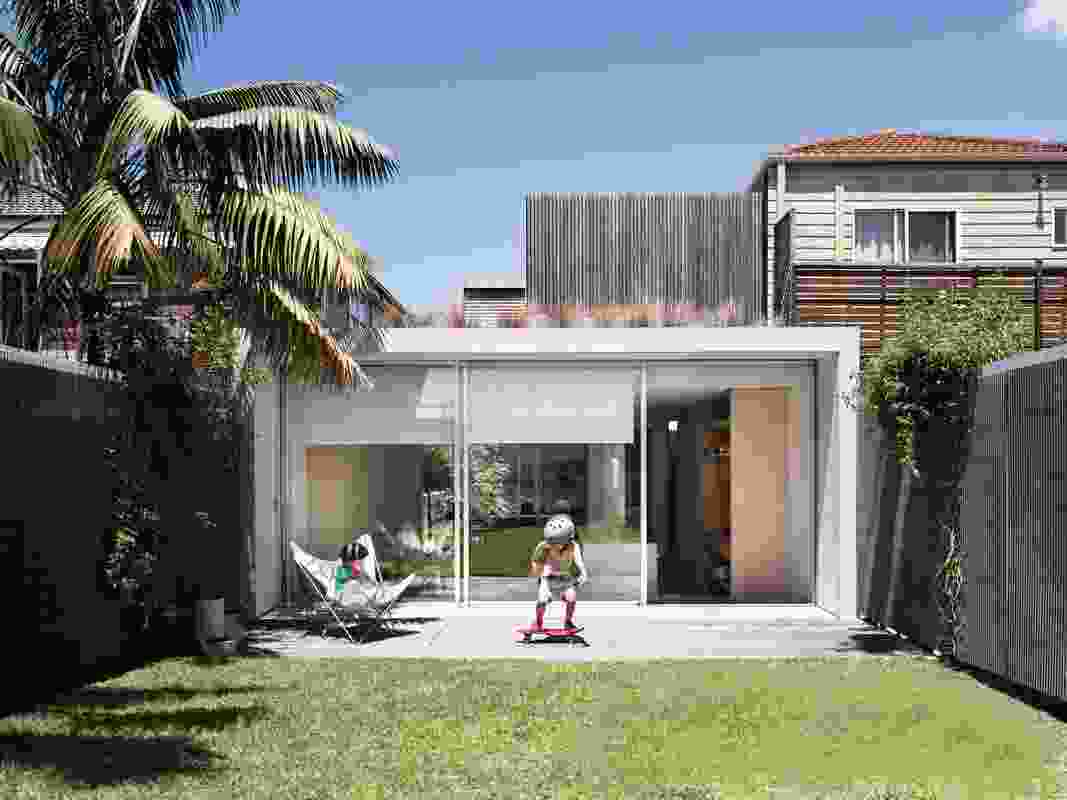 The mass of the building was determined by the desire for all interior spaces to have outdoor views. 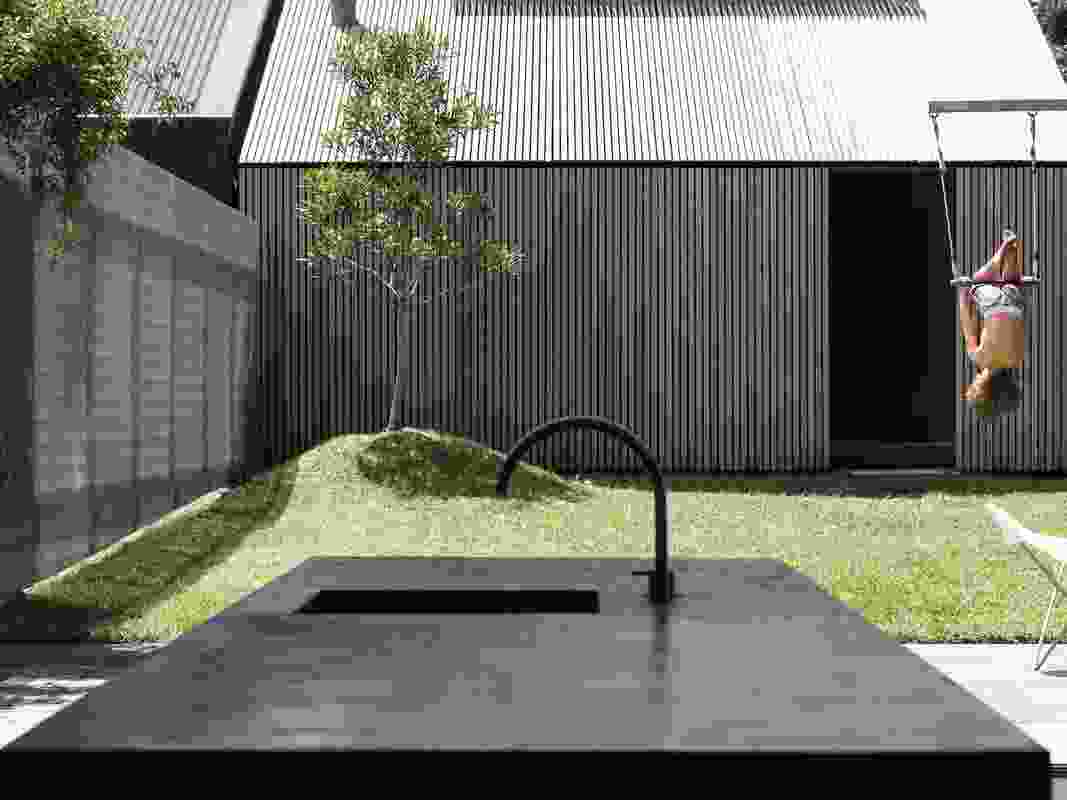 A separate garage/ studio bookends the site and the main garden sits between it and the home. 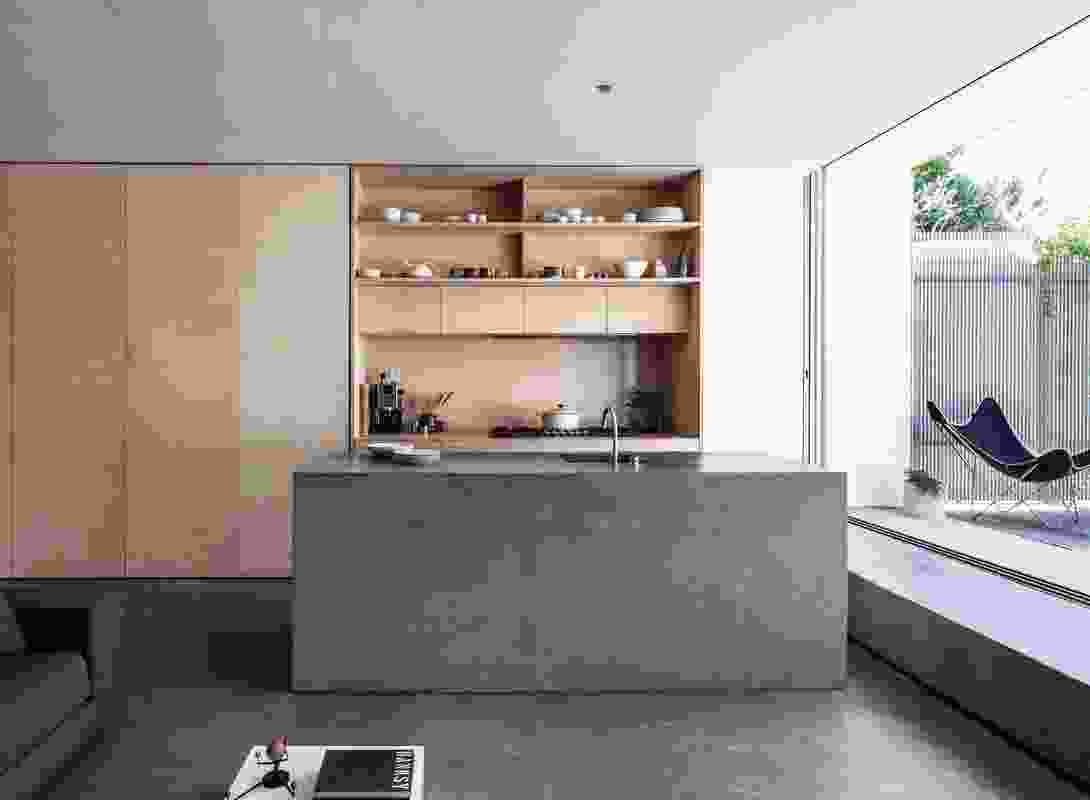 The living area is sunken to create a seating ledge along the threshold between inside and outside. 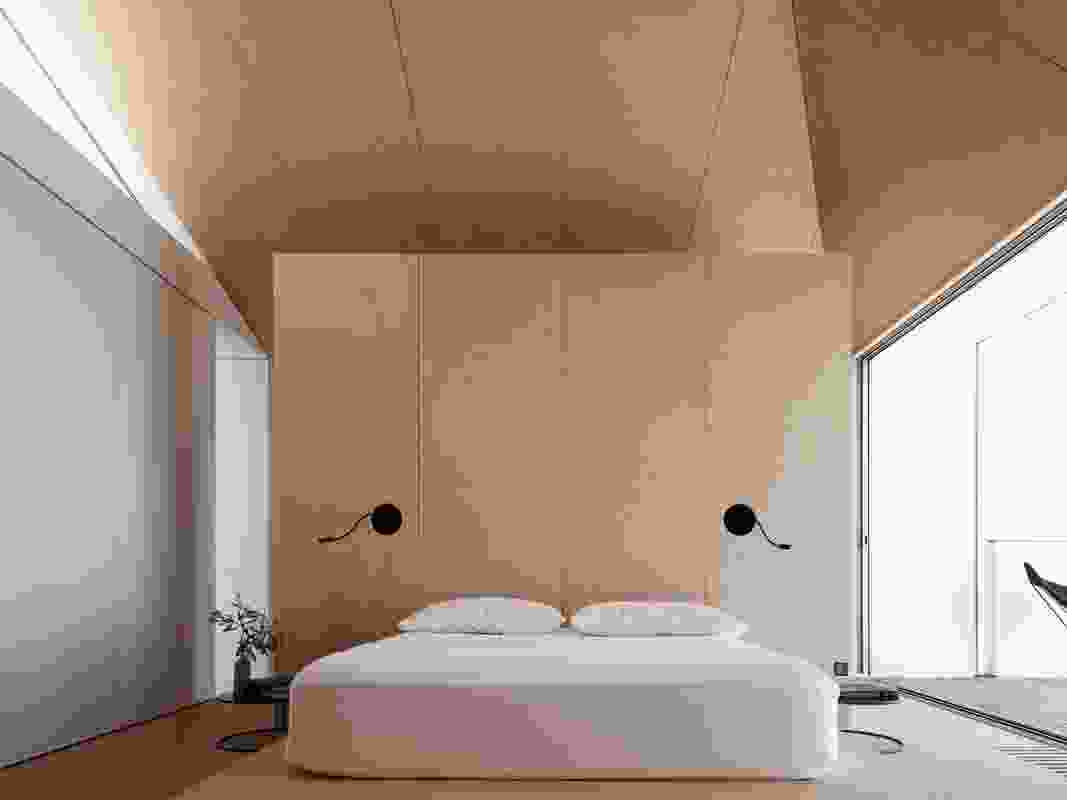 The main bedroom enjoys ocean views and has a ceiling that folds up like an origami ply-clad vault. 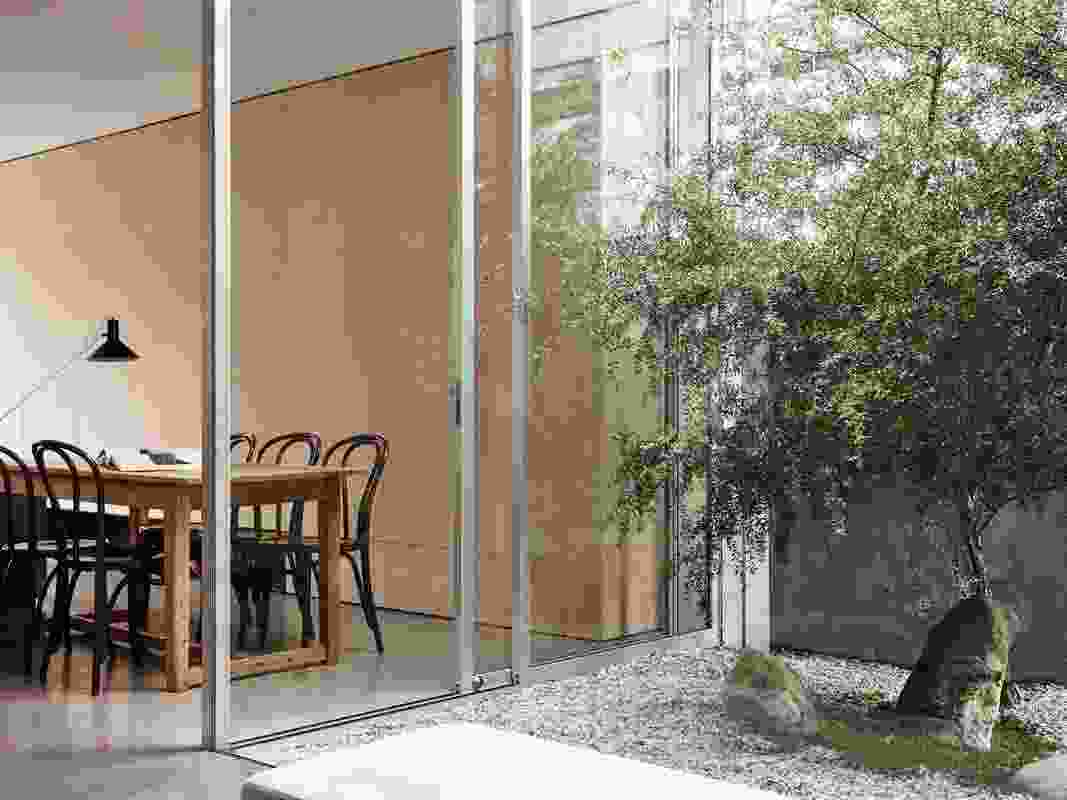 The courtyard between the study and living area gives the latter a double aspect and an abundance of natural light. 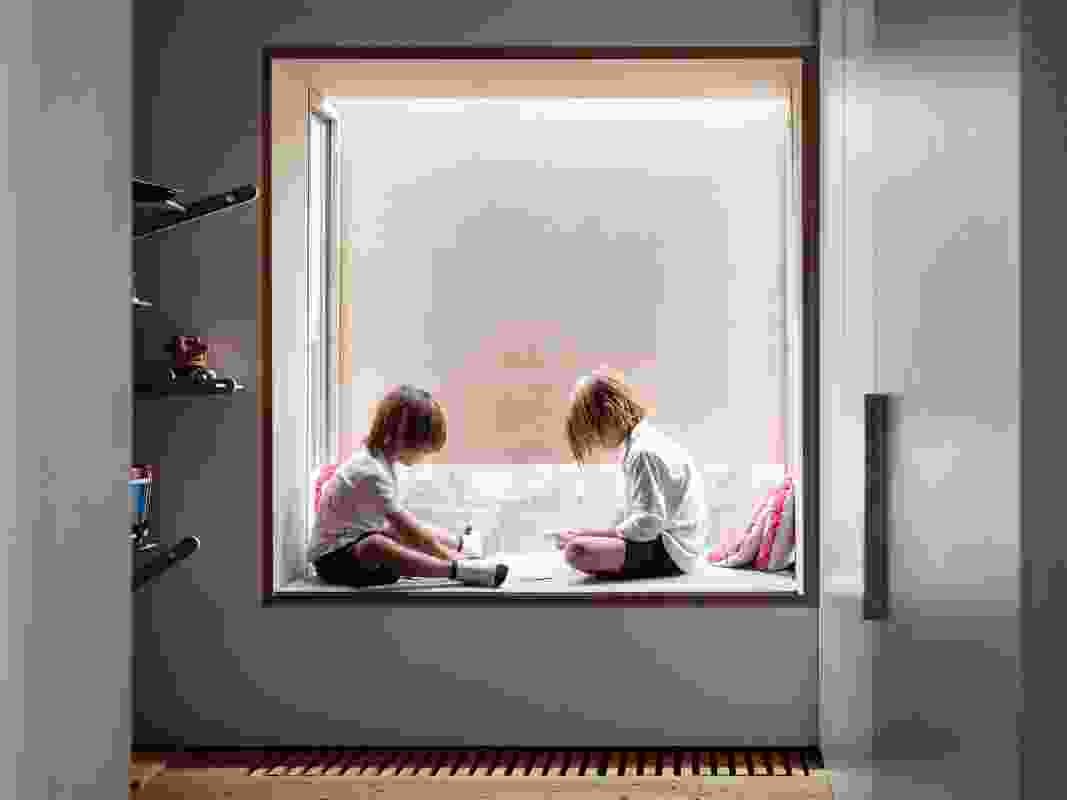 A pop-out bay window in the children’s room retains privacy from neighbours, while providing views to the sky and side garden. 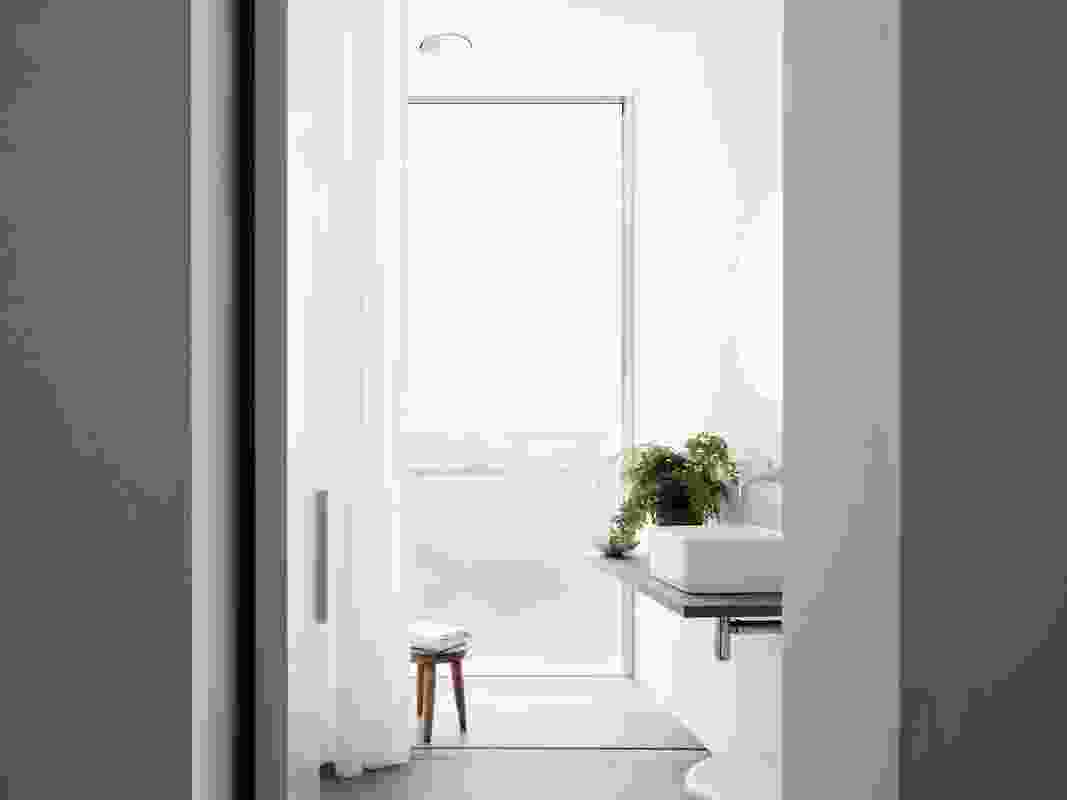 The poetry and feeling of calm throughout the home is continued into the bathrooms and other service spaces. 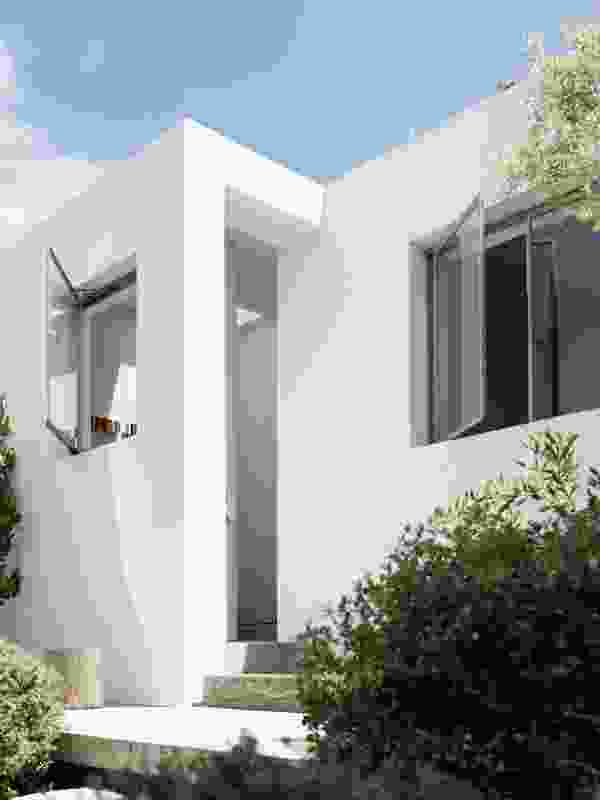 The facade is finished in an all-natural mineral-based render that will gradually patina with exposure to the elements. 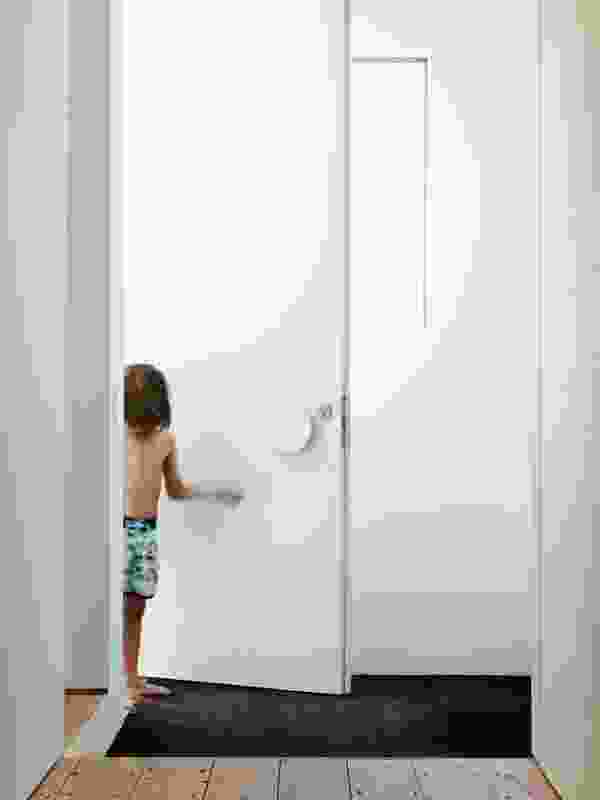 The entry to the house is from an offset path that leads to a well-lit vestibule.