Competition for an “architecturally designed executive residence”? Well, no, but you’d be excused for making the assumption. The brief for the First Edition Limited Design Competition actually sought to explore new housing typologies in Canberra’s nouveau Soho, the Kingston Foreshore. The Land Development Agency (LDA) – an arm of the ACT Government, and the developer of the Kingston Foreshore – had struggled to find a local reference for a type of housing that is the bread and butter of intense urban environments, and the competition is one way of generating discussion.

Colin Stewart, Canberra architect and joint winner of the Kingston Foreshore Masterplan Competition, 1997, has worked with the LDA to develop a new urban area that breaks the mould in many ways. For a start, the site is waterfront (a first for Lake Burley Griffin) and builds around the existing Kingston Harbour to create 37 hectares of new higher-density residential development, generously larded with heritage, cultural, environmental and recreational features. This in a city that until 15 years ago had little alternative to the detached bungalow on a quarter acre (although Roy Grounds’s Forrest townhouses of 1961 are a memorable exception).

The site has a gritty, post-industrial je ne sais quoi, but its warehouses lacked redevelopment potential. This presented an opportunity for Stewart’s long-held desire to reinterpret the traditional expressions of “small-lot development”. The ideas competition was to address the forms of living we know as the courtyard C house, the loft house and the townhouse. We’re talking the warehouse model – no setbacks, can go to three storeys, innovative solutions to natural systems, and mixed use – residence plus small office/gallery/business. Integral to the idea is smaller block size – and it becomes apparent that “small” in Canberra would be seen as “grand” in any other city. But the reality of the situation is that the package of 59 plots of between 230 and 490 square metres bear significant land value realization responsibility – the plots are expected to sell from $300,000 to $800,000. Clearly, the intended market is one that is not unfamiliar with architects and the idea of bespoke design. This is a market that developers generally seem to be increasingly engaging with through “off-the-rack” designs by prominent architects.

Five architects of “acclaimed national profile” were invited to participate in the first of a two-stage process. The jury – Graham Jahn, Angus Gorman of the LDA and Colin Stewart – selected three schemes to proceed to the second stage. The three finalists are Kerstin Thompson Architects, Lesiuk Architects, and Stutchbury and Pape. Keeping in mind that this is an ideas competition, the product is firmly in developed concept design territory, but the second stage was further informed by discussions of flexibility of use, adaptability to differing sites, cost, environmental performance and design innovation.

One cannot help but be engaged by the three finalists’ schemes – this is a scale and type of residence that most architects have thought or fantasized about. But the real issue of this competition is the freshness of the solutions to an age-old set of parameters and the usefulness of the concept as a new housing model. The schemes by Lesiuk and Stutchbury are instantly recognizable – chips off the block – gorgeous, rich, lyrical architecture that brings equal parts romance and refined logic. The Lesiuk concept works around a central courtyard, with the upper floors liberally illuminated through louvred and glazed roof lanterns. The planning is supremely elegant and difficult to resist. Spatial disposition is a distillation of essentially traditional relationships.

The Stutchbury scheme uses a linear idea, with the structure adjacent to a full-length courtyard, and is the only proposal to broach three storeys. In fact, the proposal has a curious vertical progression, with generous public areas on ground, alpha-occupant quarters bridging level two, and kids’ bed and “adventure” spaces taking the crow’s nest position.

The scheme that stands out is by Kerstin Thompson Architects – it explores the brief most thoroughly in relation to the development of a new housing model. Thompson’s proposal does all the things the others do, but with an invigorating spareness of gesture. Organized through large trusses, the house flows around three courtyards specific to site orientation and dimension. These and the service cores provide spatial demarcation. Much of this is resonant with architectural movements in Australia during the 1960s and 70s, where the potential of architecture as a social art was explored – particularly exemplified through the works of the Merchant Builders. This notion is reinforced upon analysis of the anticipated construction costs – the KTA scheme is less than half the cost per square metre of the others.

For the LDA, the ultimate measure of success of this competition is the degree to which the schemes manage to excite the market, and the way in which that market responds to the architectural challenge. The land developer is still preparing development conditions that will include the requirement that an architect is used.

It is also exploring options for more “affordable housing” on other sites.

Overall, this has been a useful exercise in reopening discussion and is a successful result for the LDA, but if we are to see real movement in the forging of new housing typologies, then the parameters need to become more challenging and applicable to higher densities.

›› Catherine Townsend is a principal of Townsend + Associates Architects. 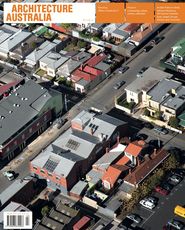