Tropical Darwin is twelve degrees south of the equator. There are parts of central Darwin that are two to four degrees hotter than the surrounding monsoon woodland. These increased temperatures in the city are particularly noticeable at night, and on a clear evening central Darwin can be as much as twelve degrees warmer. This dramatic difference in temperature between the city and its surrounding non-urbanized areas is described as the urban heat island effect.

The Draft Darwin City Centre Master Plan1 proposes some valuable insights and strategies for designing public landscape in response to the urban heat island effect experienced by the city. The draft plan (not yet approved or adopted at the time of writing) was prepared by the City of Darwin with the Northern Territory Government, and a consultant team led by Design Urban and including Urbacity, Clouston Associates, Space Syntax and Michels Warren Munday. It was created after community consultation and workshops, research and mapping of the city.

Darwin experiences a monsoonal tropical climate characterized by distinct wet and dry seasons. The Indigenous people of the local Larrakia Nation have a more refined understanding of this – their Gulumoerrgin seasons include seven periods characterized by distinct weather patterns that are reflected in the biological world by indicator plants and animals (terrestrial and marine).2 Darwin’s daytime temperature remains above thirty degrees year round, with overnight lows dropping in the dry season due to decreasing humidity. Winds tend to blow north-westerly in the wet season and south-easterly in the dry season, but there is significant movement around these directions at the change of season.

The findings of George Goyder’s 1869–1870 survey expedition established from the outset a settlement pattern that is largely intact even today. The orientation of the long streets on a north-west/south-east axis (similar to the main runway of the Darwin International Airport) can provide a breezeway, with drier winds coming from the south-east in the dry season and sea winds coming from the north-west in the wet season.

The Draft Darwin City Centre Master Plan identifies heat in Darwin as a major detractor to walking in the city. This was also supported by stakeholders and through public consultation. Extensive “point in time” studies were undertaken to identify heat issues and develop evidence to support them. Edge conditions and canopy cover were also mapped. The Northern Territory Government plans to develop a more comprehensive longitudinal study using satellite imagery, aerial photography and ground sensors. Nevertheless, this ground study gave much useful information.

From this data the plan proposed using volumetric controls to buildings that constantly shadow the street, as is done in many Indian and North African cities, and using shadow mapping to mandate buildings as shade structures. The plan also proposes including street awnings on all major streets, consideration of geothermal heat exchange (cool air) to shaded pedestrian spaces, and the creation of an urban forest.

Trees are one of the most cost-effective means to reduce urban heat island effects and transform our urban environments to create prosperous, liveable cities. However, in less than two decades, Darwin will have lost one in two street trees due to age and natural decline. On top of this, new developments and increased population densities will result in major tree losses from private land. When considering this in combination with our tropical climate, forecast temperature increases and the known heat island effect, we can expect the maximum temperature in the CBD to increase by two to five degrees within thirty years. The energy costs associated with such a temperature increase would be significant.

The role of trees in controlling the microclimate and reversing this effect is recognized as a cost-effective approach. 3 But to be most effective, it requires a complete rethink as to how trees are viewed in Darwin and particularly central Darwin. For example, instead of seeing trees as ornaments, we need to see them as critical infrastructure. Rather than thinking of them as having no monetary worth, we need to recognize their economic value. We need to focus on overall tree canopies as opposed to individual trees.

The dataset collected by the City of Darwin in the core area covers 1,150 individual trees and identified 542 vacant sites. The basic survey work undertaken by Clouston Associates for the remainder of the site study area identified more than 1,500 individual trees and more than 1,200 vacant sites. The City of Darwin survey shows that the site is home to 910 trees and 240 palms. Just six species make up more than 70 percent of the tree population.

This limited diversity can have serious implications for the long-term viability of our street trees. The impacts of climate change, pests, diseases and other physical threats can be better managed with a diverse range of species. The urban forest strategies prepared by the Sydney and Melbourne City Councils have identified diversity standards for representation of family, genera and species, but the current street tree stock in Darwin falls well short of both standards. Species selection will be an important consideration since an individual tree is required to meet many prerequisites including longevity, robustness, stability in severe storms, low maintenance, no safety risks or hazards, suitability to dry tropics and appropriate size.

The urban forest comprises the trees and vegetation throughout the Darwin area, including all types of trees and irrespective of whether they are on streets, in parks or on private land. The urban forest, measured as a canopy cover percentage of the total land area, is recognized as a primary component of the urban ecosystem. It is one component of our complex built environment alongside roads, car parks, buildings, footpaths and services.

Urban forests in and around urban communities provide physiological, sociological, economic and aesthetic benefits. They should contain carefully ordered urban oases and open spaces for recreation. It means we need to rethink how we deal with trees in our city to maximize the benefits.

Planning is in essence about connecting living, working and play but instead it tends to be focused on property, zoning and roads. Zoning makes dull towns and cities. The Draft Darwin City Centre Master Plan focuses on heat island mitigation – the urban forest, the (narrow) street; engagement with the street; buildings, awnings and trees working together; and building form. This masterplan of a small tropical city gives important planning directions, important ways and means, for Australia’s larger cities.

A final masterplan has since been released by the NT government. The Minister for Lands and Planning is currently seeking comment about the inclusion of the Darwin Ceity Centre Master Plan in the NT Planning Scheme. See the masterplan here. 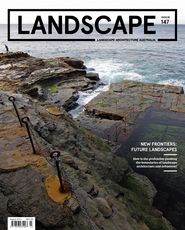 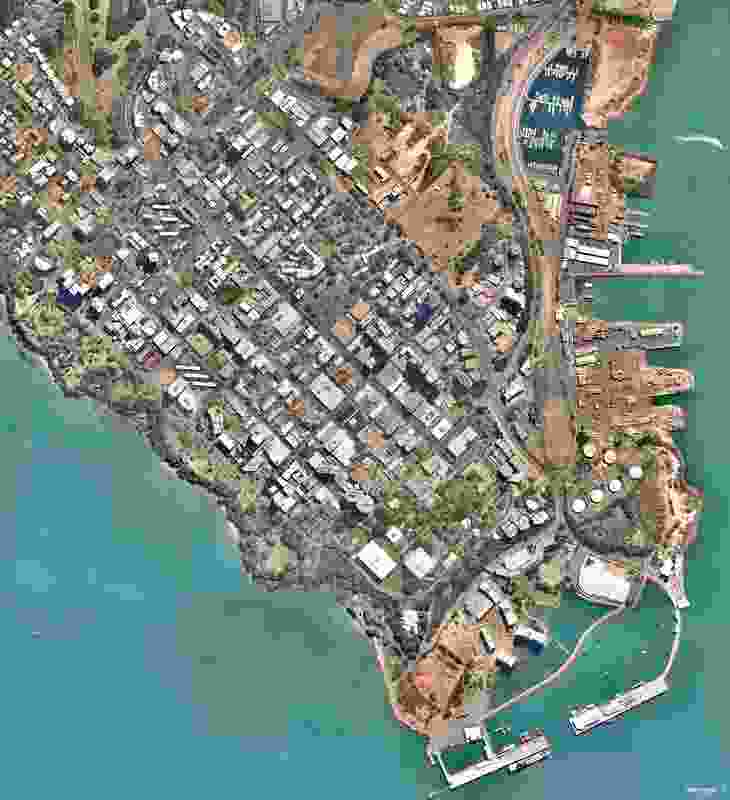 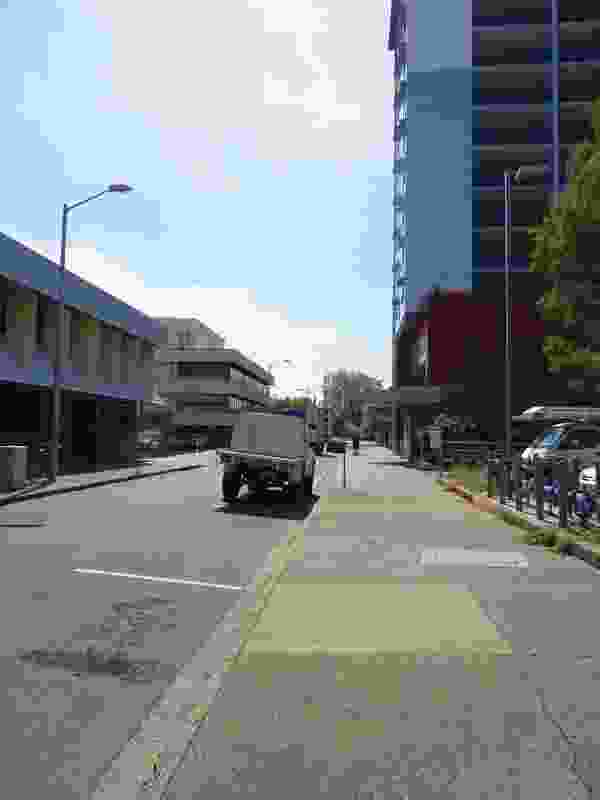 Briggs Street, Darwin currently has no provision for trees and its only shade is provided by adjoining buildings. 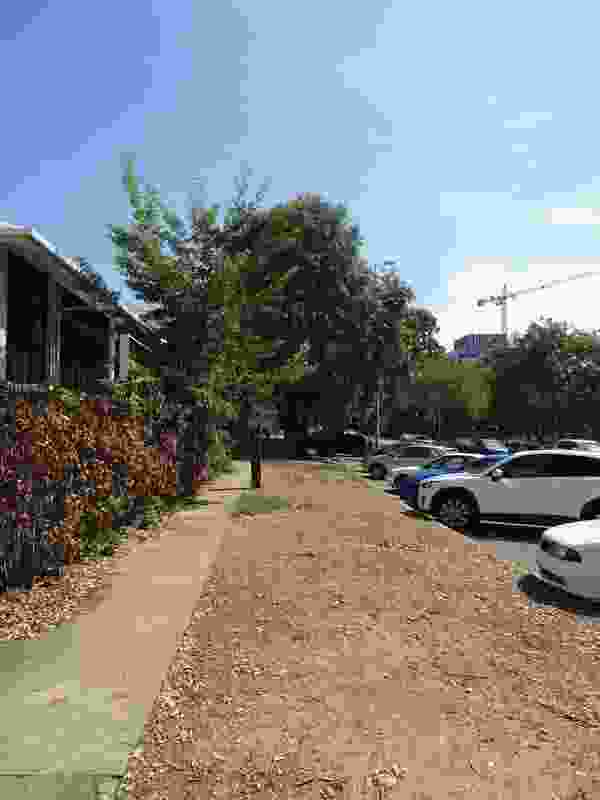 This situation illustrates how important it is for a city to have a long-term strategy to fill gaps and replace trees as they age and are removed. 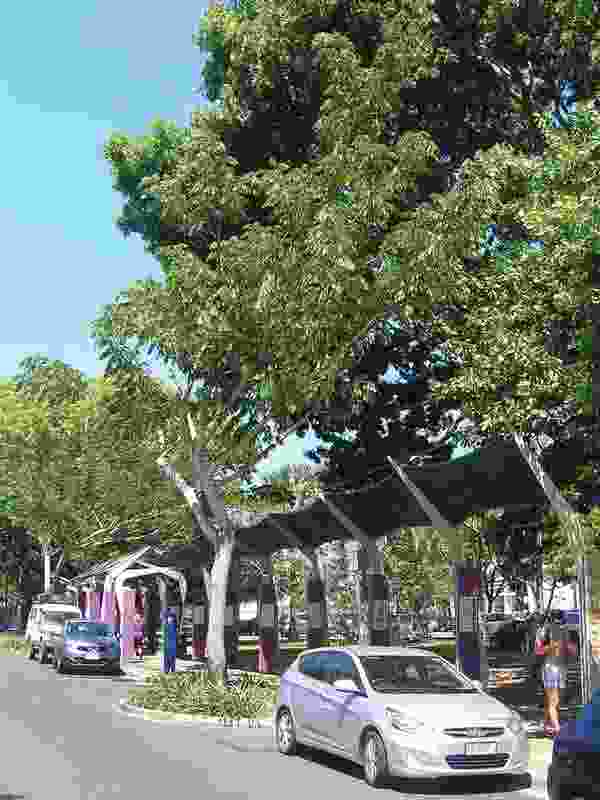 Albizia saman “raintrees” growing along Smith Street, Darwin will in time touch across the road and offer an extensive canopy. 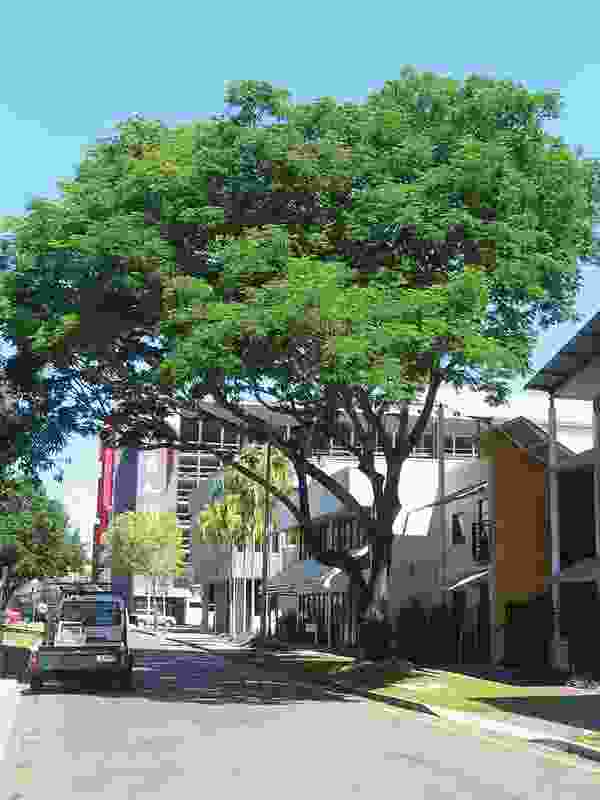 A mature Cassia fistula “golden shower tree” in central Darwin, contrasted with a row of palms further down the street. 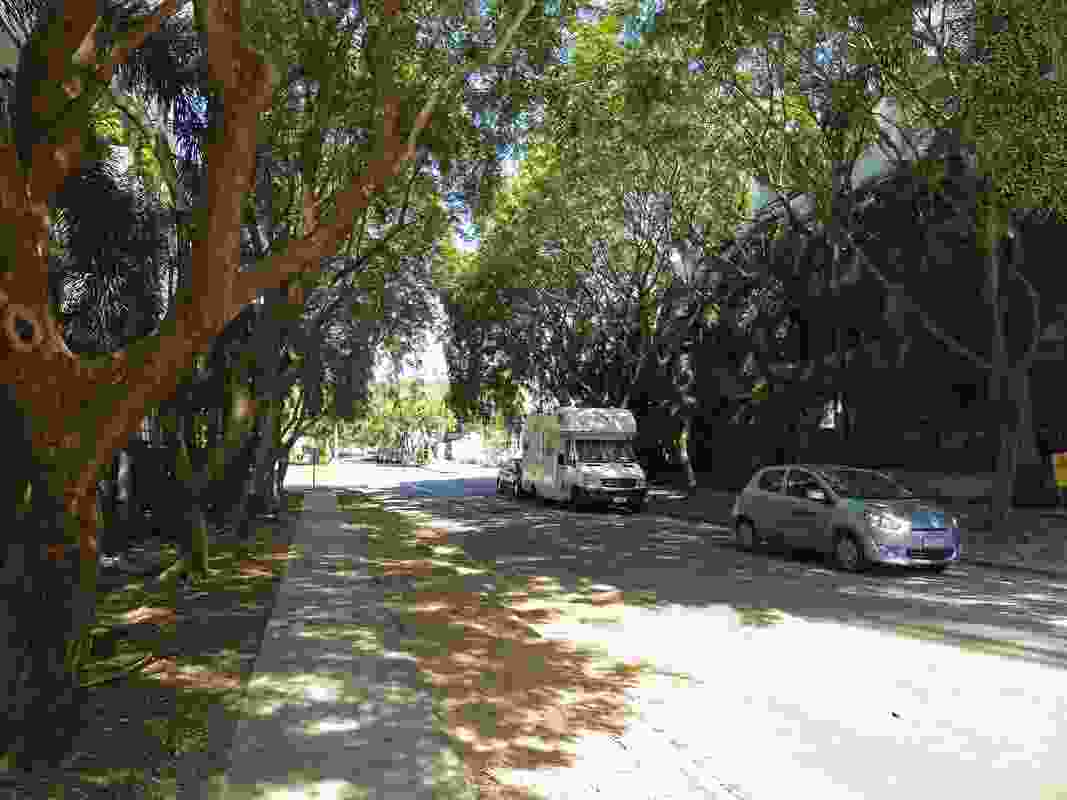 Shepherd Street in central Darwin is a well-shaded avenue with complete canopy cover.