Visiting Copenhagen in 2014 as part of the MADE Australian-Danish exchange program by the Sydney Opera House, Robert Martin is drawn to the icy waters of the Kastrup Sea Bath, one of a new wave of seaside public places.

Kastrup Sea Bath as seen from the shoreline of Amager Beach.

With an average summer temperature of only two degrees warmer than an average Sydney winter, it may come as a surprise to hear of the new Danish trend of building urban public spaces that encourage water recreation.

Kastrup Sea Bath by Swedish firm, White Arkitekter is one example. The day I stumbled across this intriguing wooden structure about twenty metres off the eastern shoreline of Copenhagen, it was not ideal beach weather. It was a cold, grey and windy winter’s day, but somehow the sky’s dreariness only added to the appeal. Already weathered by the Baltic Sea, the bath’s red ironwood sat motionless in the water’s current like a tiny island connected by a slim boardwalk.

An alluring gesture within the shelter enticed me from the gusty Copenhagen shore. On approach, a strategically placed cut in the wooden structure provided an unobstructed view towards the horizon. While the sea bath was my intended destination, this framed vista compelled me further outwards towards the skyline.

It’s obvious that the bath’s beauty lies in its simple, elegant form. What was not immediately obvious, however, was how its form was so intimately derived from a clear understanding of the bath’s primary function – as a shelter. As I first stepped into the periphery of the circular form, the howling wind seemed to suddenly stop, replaced by the quiet, repetitive lapping of small waves against the bath’s thick wooden piers.

Since its construction in 2004, the simple material palette of galvanized steel and red ironwood has aged beautifully. So much so, that the bath has the presence of a monolithic Richard Serra sculpture. Like Serra’s work, the bath also challenges the one’s perception of their body in relation to the water and nearby shoreline by encouraging movement in and around the structure.

Moving ritualistically around the central body of water, keeping a clear distant from the icy water’s edge, I rose gradually along the path’s turning inclination until I reached a height five metres above the the water. From here the curve of the structure steered me back towards the edge of Copenhagen, offering a completely new perspective on the landscape.

Kastrup Sea Baths is another example of the Danish commitment to well-designed urban spaces – both on land and sea. In 2014 Copenhagen was named the European Green Capital for its ‘eco-innovation’ approach to urban planning, and its high rate of city cyclists. The city intends to be carbon neutral by 2025; perhaps it will get there not only by thinking green, but also by leaning towards shades of blue.

Robert Martin was in Copenhagen for six weeks in 2014 as part of the inaugural Multi-disciplinary Australian-Danish Exchange (MADE) initiated by the Sydney Opera House. Apart from affording him the opportunity to explore the city’s rich design culture, the MADE program involved working on an urban project at Henning Larsen Architects with four other Australian students. After the six-week adventure, Robert was offered a position at the Henning Larsen Middle East office in Riyadh, Saudi Arabia, where he still works today. 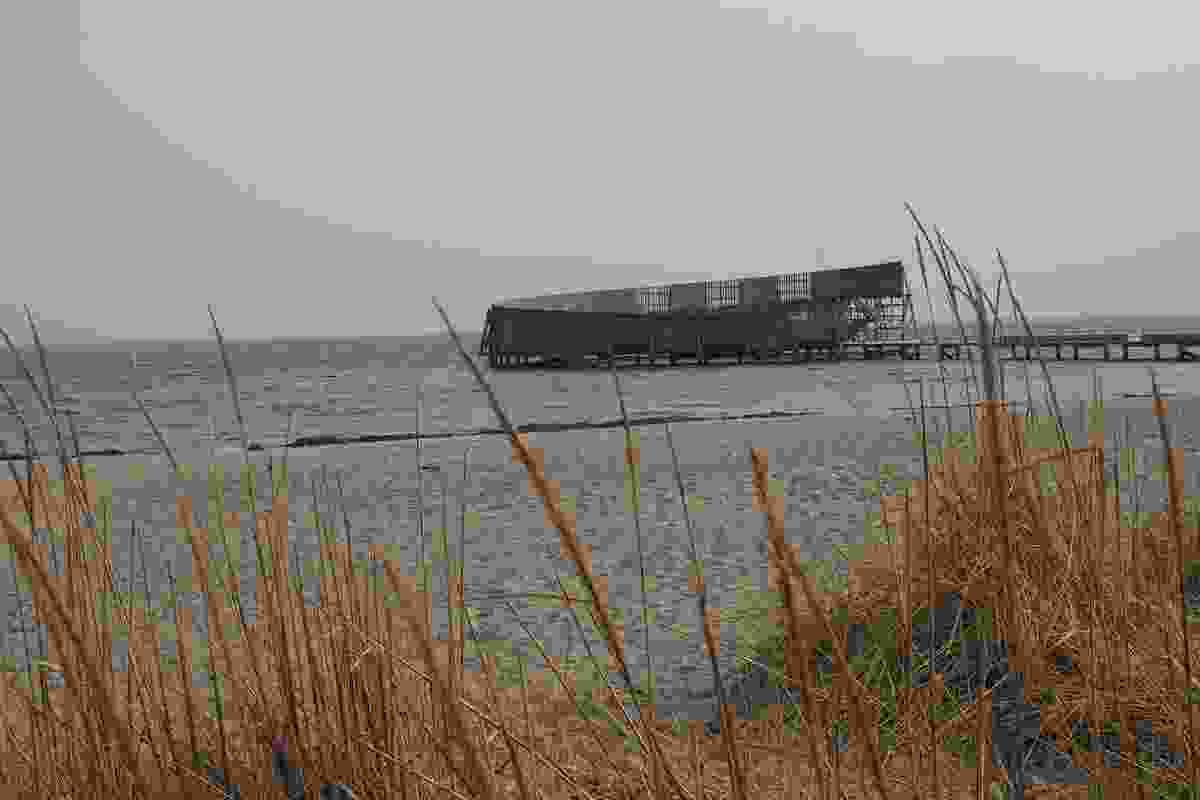 Kastrup Sea Bath as seen from the shoreline of Amager Beach. 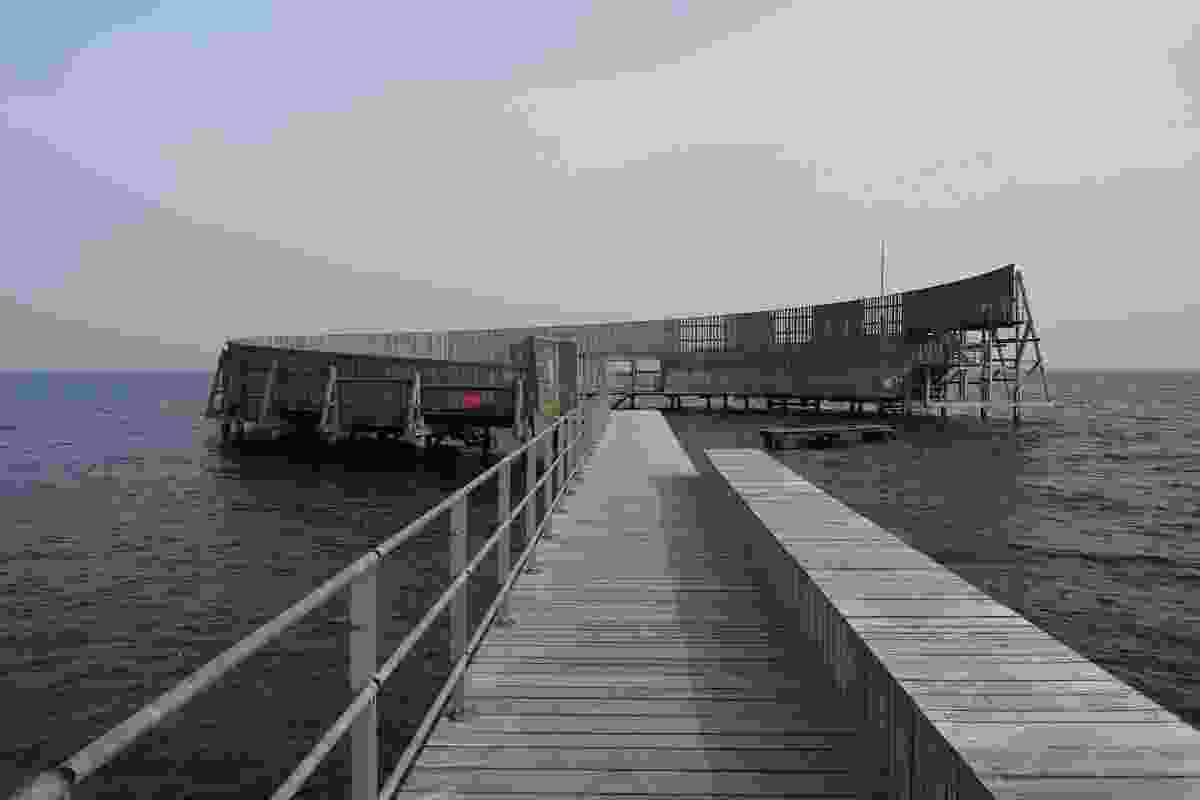 On the boardwalk towards the sea bath. 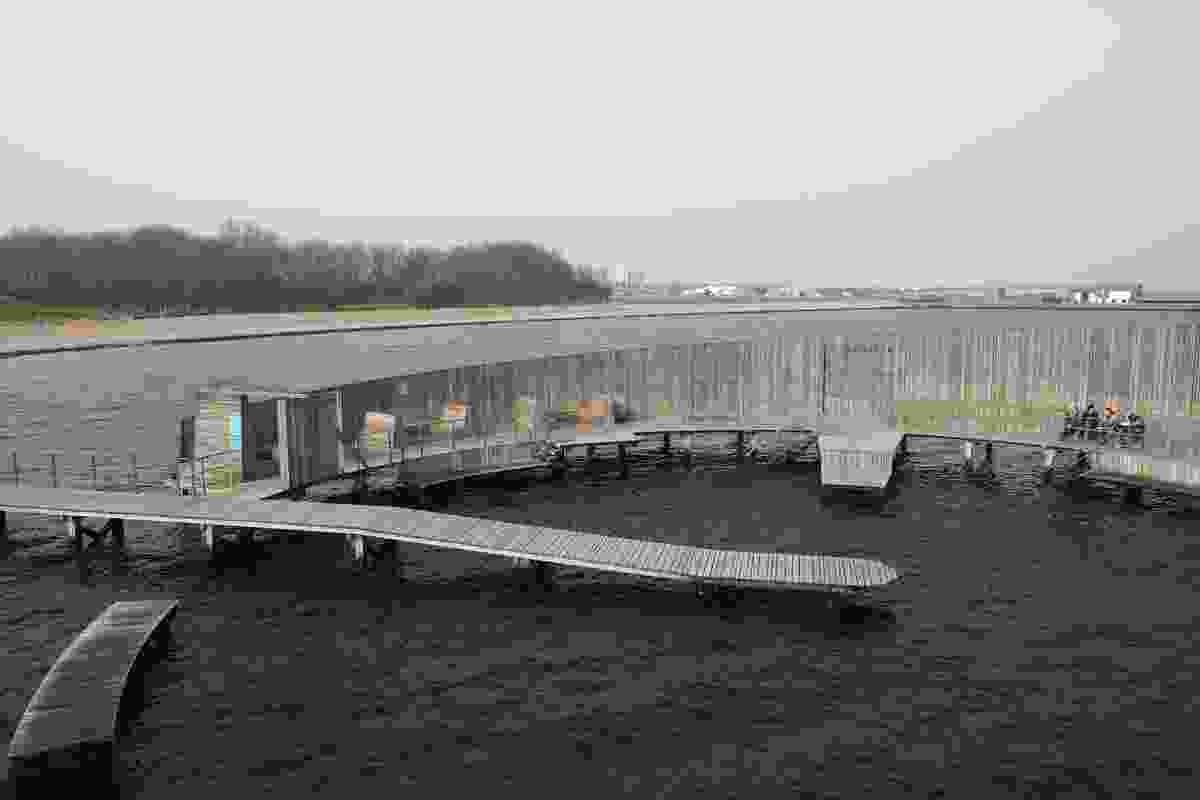 A group shelters (far right) from the wind at the waters edge. 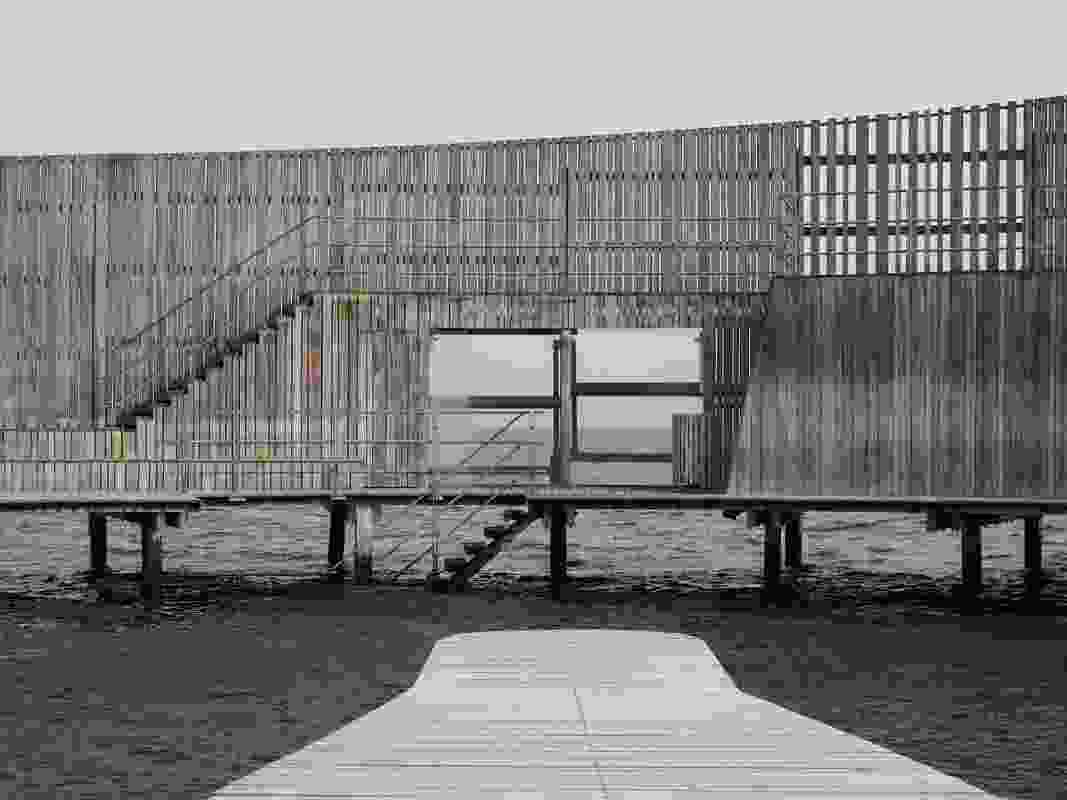 The sea bath’s beautifully framed view to the Baltic Sea. 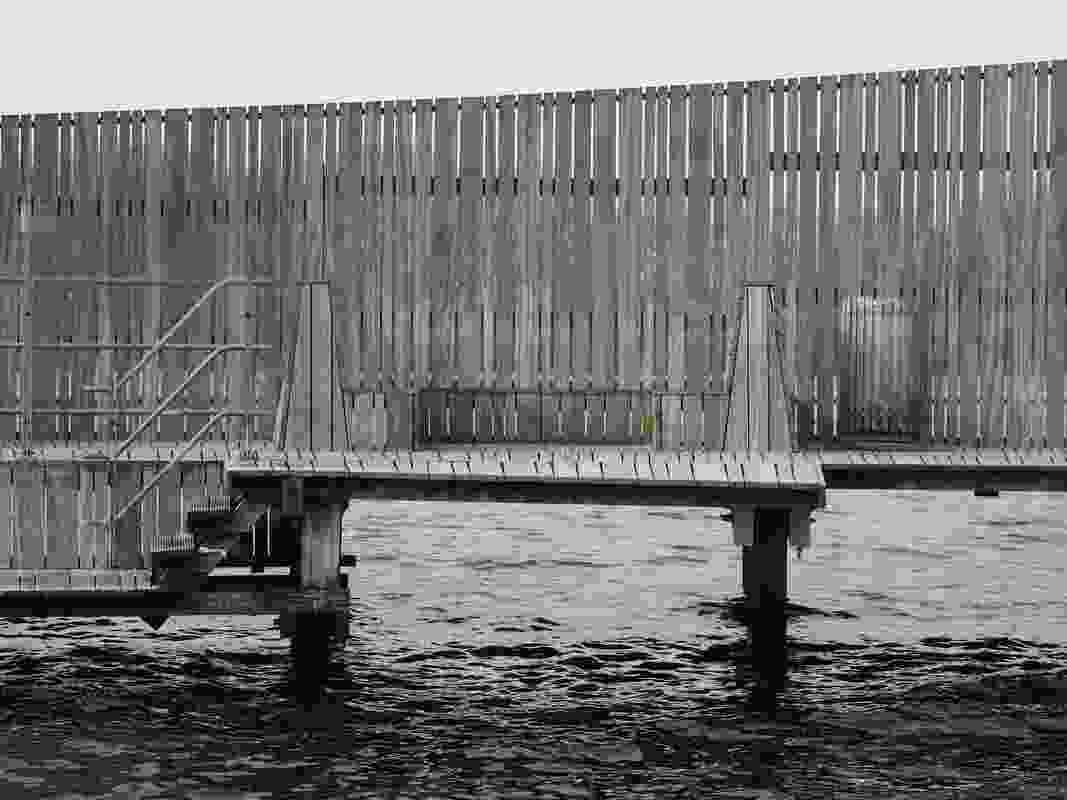 Inbuilt bench seating and bins are camouflaged by the extensive use of weathered red ironwood. 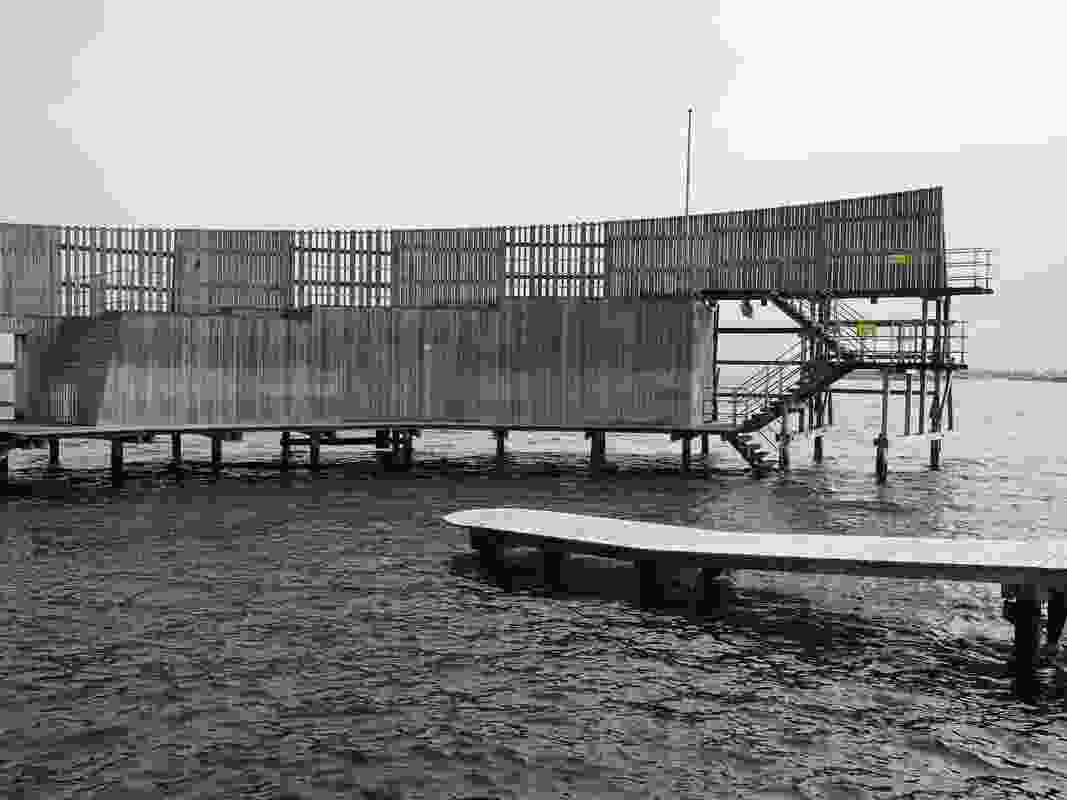 The pinnacle of the inclining path is a 5-metre high jumping platform. 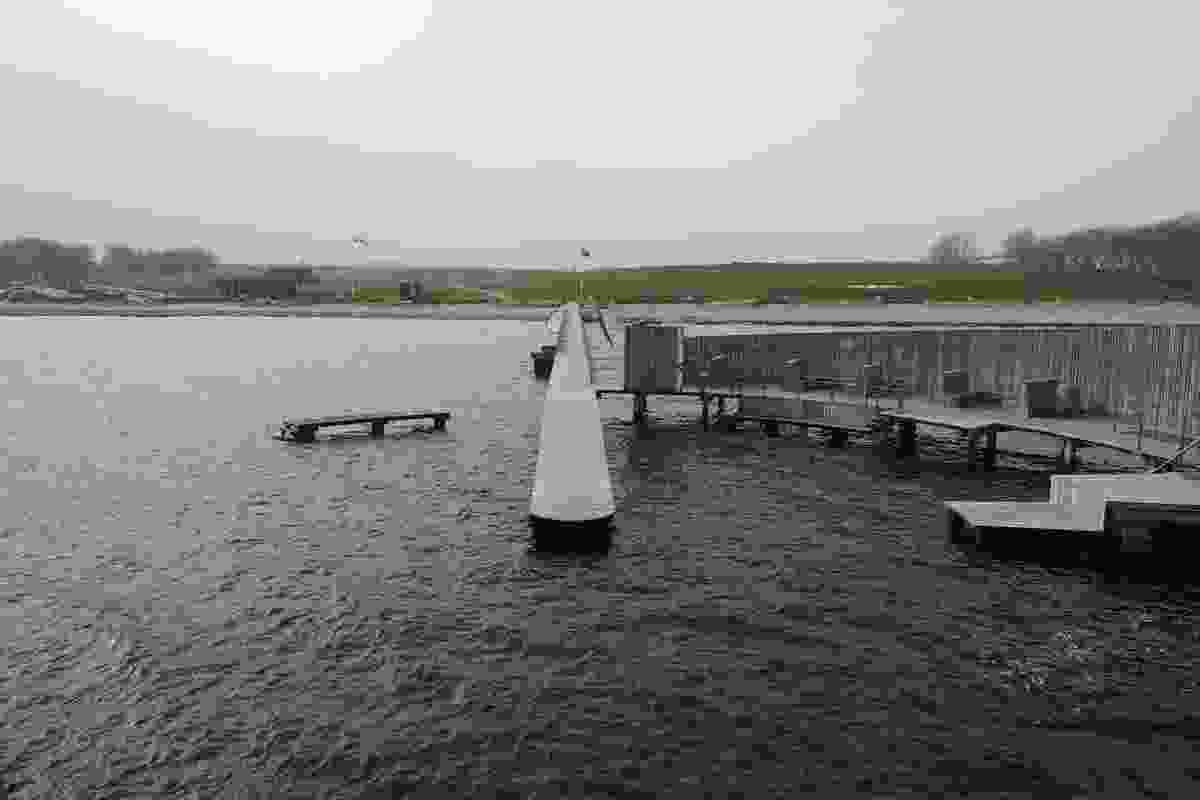 The view from the sea bath back towards the Copenhagen shore.