A thoughtful response to its unique setting and climate in the Gold Coast’s Sanctuary Cove, this house, by Justin Humphrey Architect, embodies principles of subtropical modern architecture to create a textured home for living and entertaining.

The floating roof ties together the home’s concrete and timber elements and gives lightness to its form.

Frank Sinatra and Whitney Houston headlined the Ultimate Event at Sanctuary Cove in 1988. The five-day festival heralded the grand opening of the Gold Coast canal estate, which had been ratified under its own legislative act, the Sanctuary Cove Resort Act 1985 . Over time, the secure, gated community has, for better or worse, resulted in an enclave of architectural expression. Set amongst all of this, Cove House by Justin Humphrey Architect is a visual delight, poised to make a valuable contribution to its surrounds for many years to come.

Director Justin Humphrey worked closely with the client to deliver the distinctive visual identity of Cove House. The client’s previous home had subscribed to the estate’s typical aesthetic and, in engaging Justin, she sought to make a defined departure from that vernacular. The result is a house that speaks to a much broader context, beyond the confines of its gated community. In addition to providing a beautiful home environment for living and entertaining, Cove House embodies a thoughtful response to its unique setting and climate.

Perhaps one of the most challenging aspects of the site was the need to contend with three outlooking interfaces – one to the canal, another facing an easement for a public path, and the street front – positioning the house very much at centrestage. The covenant required that the facade facing the pathway be built on the boundary and therefore fire rated. Rather than see this as a constraint, Justin used this wall as an opportunity to express the materiality of the house with board-formed concrete, articulated by powdercoated metallic louvres that cleverly assist in naturally ventilating the interior.

The home’s street front employs the external cladding materials to communicate its internal functions. The board-formed concrete continues around to express the public areas within the home, while the delicate timber battens proffer contrast and convey the private spaces, such as the bedrooms and bathrooms. Separating these two domains is a central axis that draws visitors inward from the entrance to the canal. The floating roof, with finely tapered edges, ties all of these elements together and gives lightness to the form. Many of these formal elements are propositions unique to tropical and subtropical modern architecture.

A further nod to tropical modernism exists in the sequence of internal gardens and courtyards. The large entry courtyard garden at once fulfils alternate definitions for the homograph “entrance” and performs several functions in the planning of the house, providing for entry to two bedrooms, designed for guests and adult children, and framing a view through the living areas to the water beyond. Smaller, open-roofed courtyard gardens, enclosed by sliding glass doors, work to visually demarcate circulation paths. They are seam-lessly integrated into the plan, adding light, texture and acoustic sensations reminiscent of those qualities found in Geoffrey Bawa’s domestic architecture.

The gardens are, collectively, a response to the client’s desire to work with honest materials, which extends to the refined materials palette chosen for the interior finishes. Most pronounced of those finishes are the timber battens used for screening and as a continuous element that ties the internal spaces together. When applied to sliding doors, they assist in providing cross-ventilation and passive cooling to the house. Each batten’s concave profile creates a seductive tactility through shadow and depth. The smart detailing evident in the screens represents so much about the project – most significantly, a collaboration between architect, fabricator and builder as a bespoke solution.

The internal finishes are also used to zone rooms within the open, public areas of the home. Individual spaces are sculpted using height and volume changes, the arrangement of garden courtyards and changes in ceiling finishes. This approach to creating rooms within the larger volumes encourages flexible inhabitation, from a quiet night in, to a large sprawling party. The capacity to entertain a small crowd was stipulated in the brief and, undoubtedly, Cove House will delight many party guests now and into the future.

Sanctuary Cove sits within the booming region of the northern Gold Coast, an area that is a growing hub for family entertainment. Cove House has the potential to play an influential role in defining a unique visual identity for its community, as well as leading the way toward climate- and context-responsive housing in an area of rapid urban growth. This is an important role to be played by architects and one for which Justin Humphrey Architect, and Cove House, can be commended. 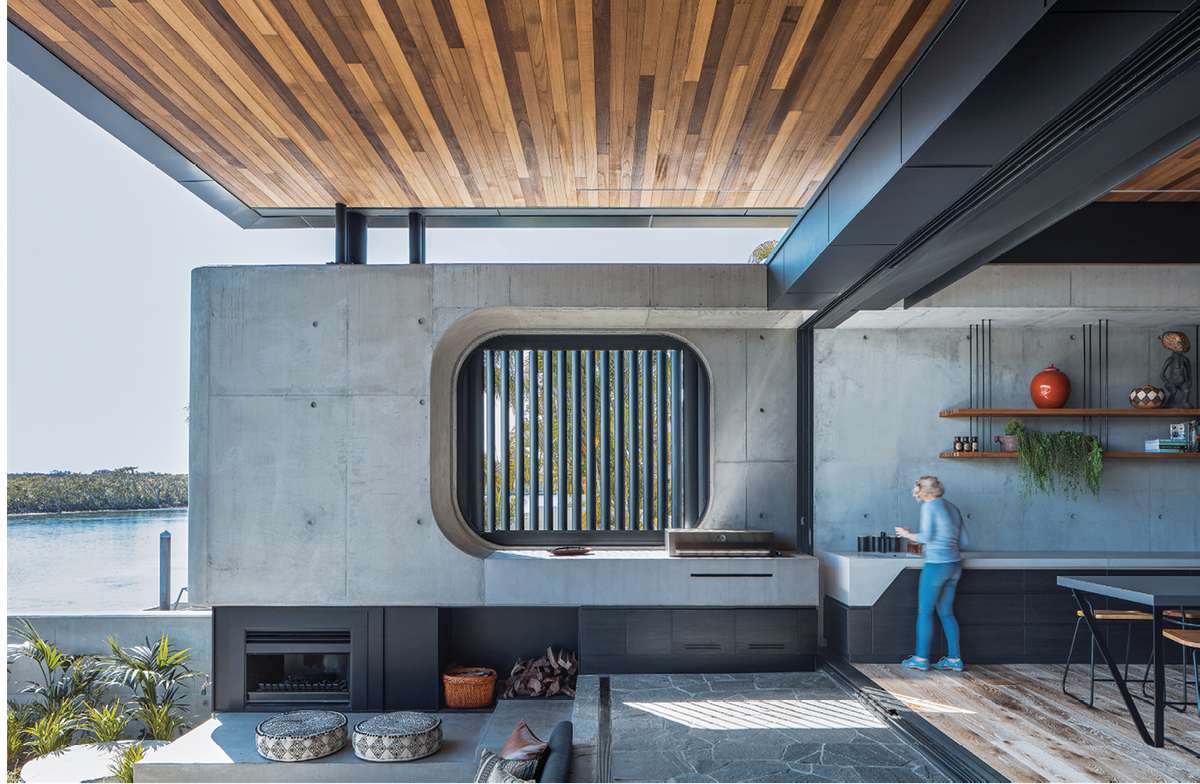 The floating roof ties together the home’s concrete and timber elements and gives lightness to its form. 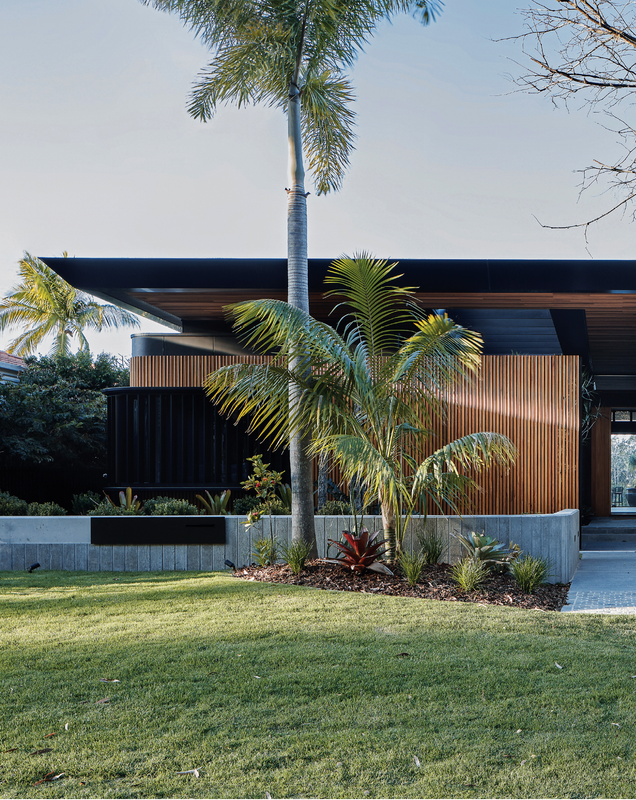 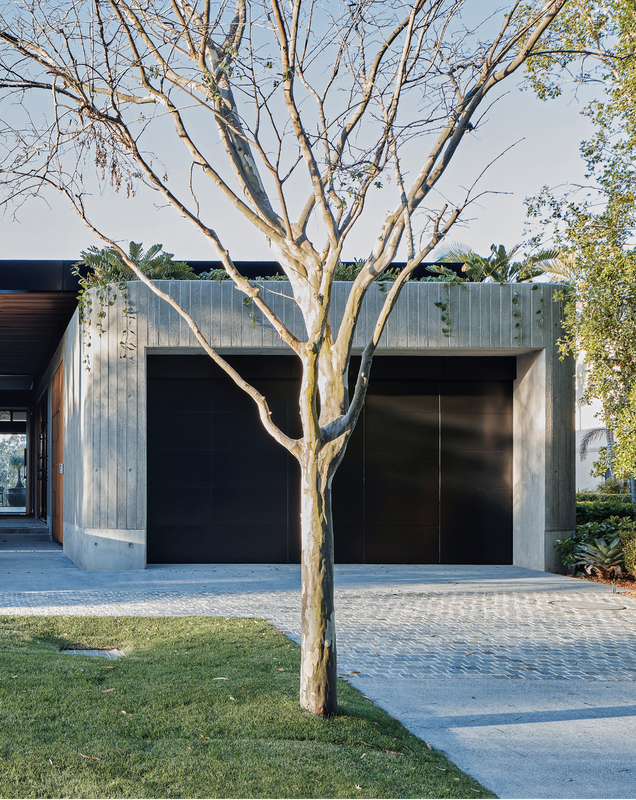 The home’s street-facing elevation hints at the materiality of the interiors. 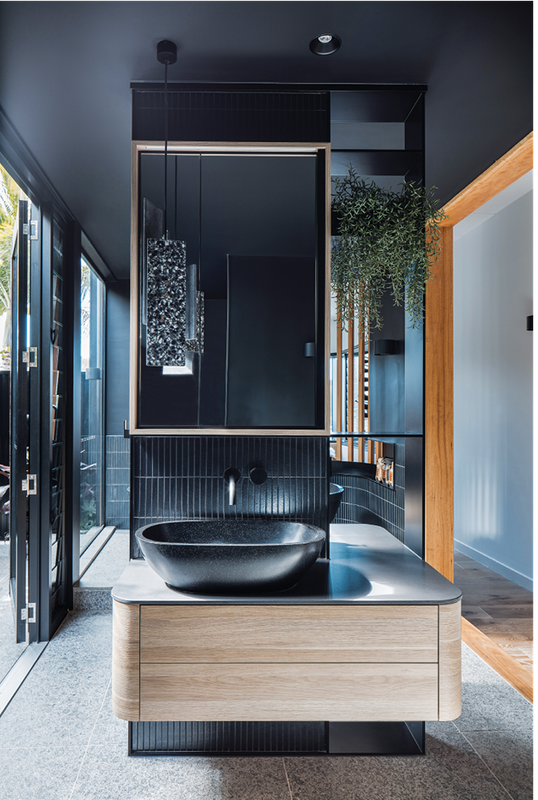 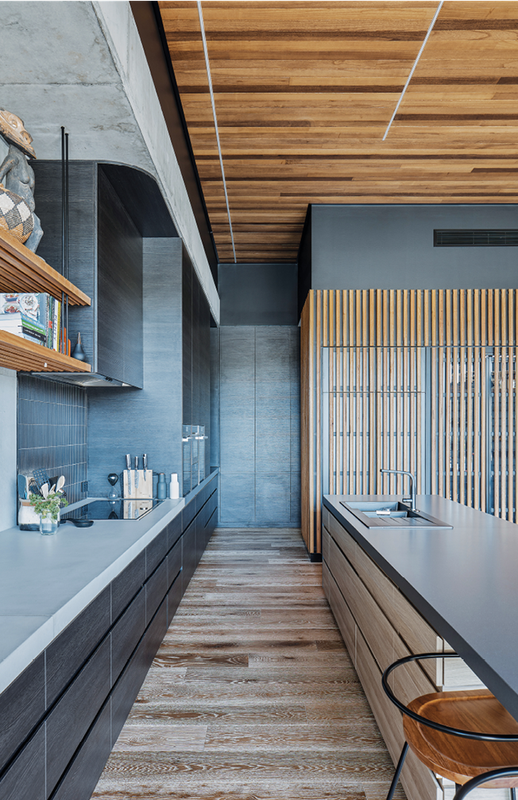 A refined material palette has been chosen for the interior finishes. 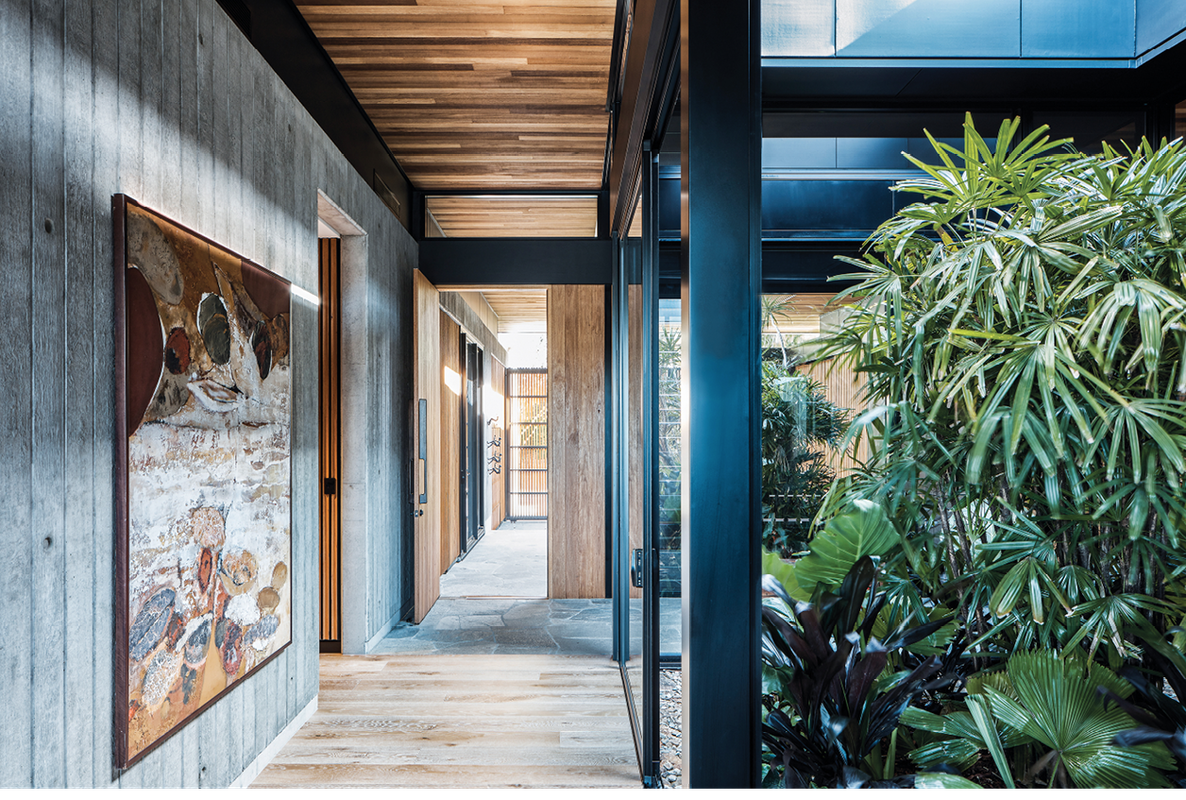 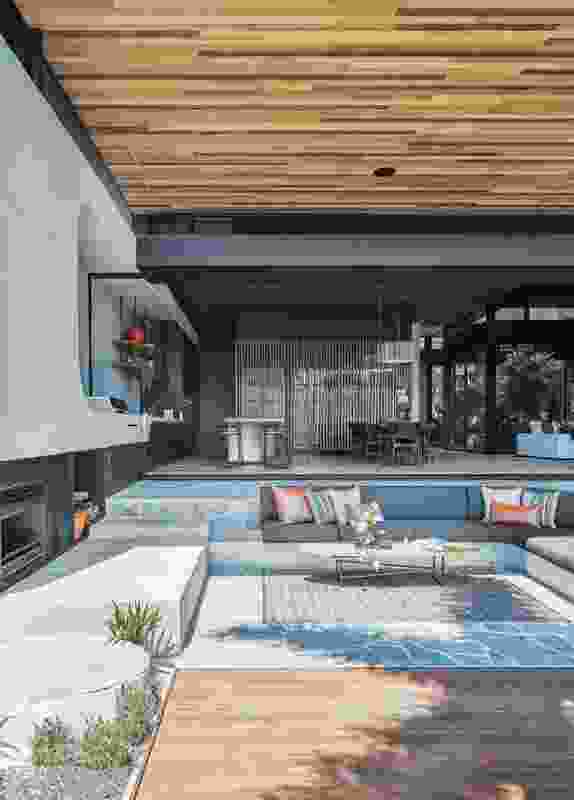 In order to zone rooms within the open areas of the home, individual spaces are sculpted using height and volume changes. 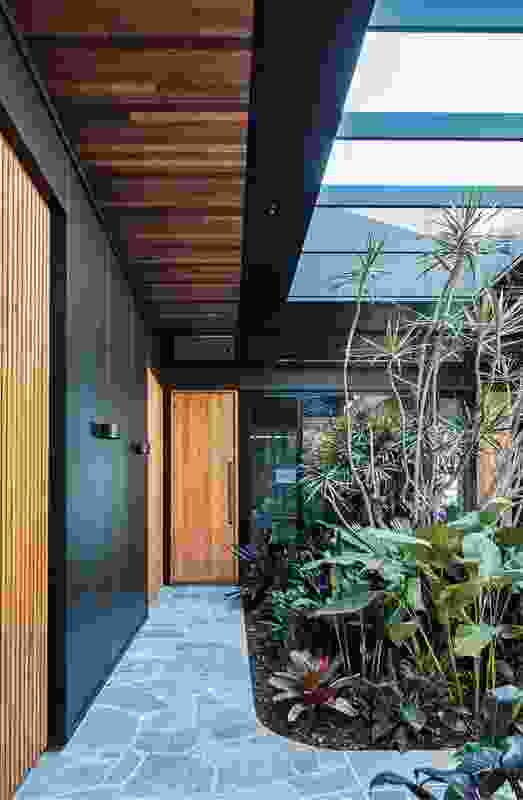 The home’s sequence of internal gardens and courtyards is a nod to tropical modernism. 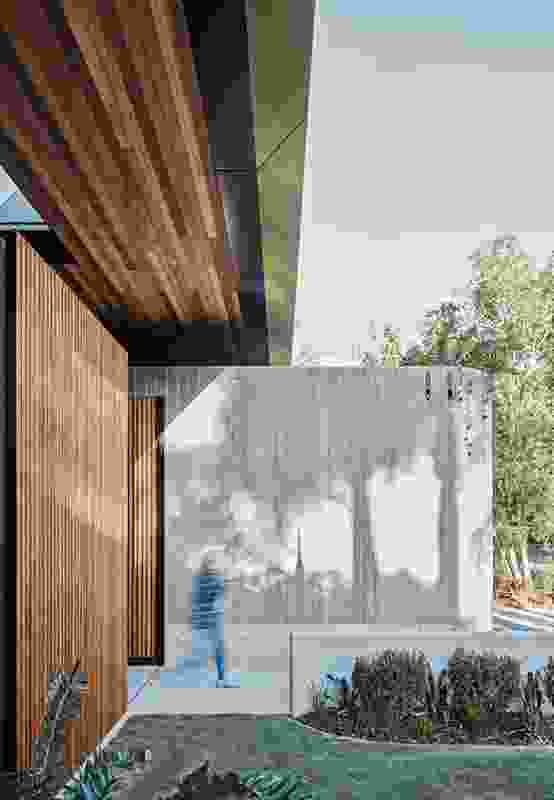 The entry’s curved concrete wall hints at the rounded forms found throughout the house.