A new set of five apartments by Smart Design Studio discreetly wraps around an existing terrace facade, while announcing itself to the street in a bold, white sculptural form.

White tile cladding applied to the new component is reminiscent of the Sydney Opera House as well as the long association that Surry Hills has with the Portuguese community.

Heritage redevelopment and infill has had a patchy history in Sydney. From the 1950s onwards many of Sydney’s handsome sandstone and masonry buildings were wiped away by architects and developers who built brown concrete monstrosities in their place. The 1980s saw uncomfortable pastiches of facades with no coherence and little aesthetic merit. Progress was made in the 1990s when architects began to engage directly with extant heritage structures and took the sensitive – if somewhat conservative – approach of clearly delineating new work from old. A respectful distance was maintained between the two with an explicit distinction in materiality – the old building a structure of masonry and the new of crisp steel and glass. In Crown 515 in Sydney’s Surry Hills, Smart Design Studio is signalling the next phase of a far more robust and sophisticated engagement with heritage redevelopment; an approach that allows old and new to have an equal voice in the way our cities are formed.

Surry Hills is renowned for its long streets of Victorian terrace houses intermixed with multi-storey brick warehouses and other remnants of Sydney’s inner-city past. The past twenty years has seen the gentrification of the area, which now houses creative and design industries, a wide range of hospitality and retail businesses, and multi-million-dollar residences. At the southern end of the main arterial street of Surry Hills is the site of Crown 515. The large, freestanding terrace was a curious remnant in an otherwise continuous streetscape. The challenge for Smart Design Studio was to create a new infill development that integrated the existing terrace while allowing the new structure to have a clear expression of independence. Having to create distinct architectural identities on multiple street fronts further increased the complexity of the project, but in the end resulted as a catalyst of the scheme’s resolution.

The strategy was threefold: firstly, the Crown Street facade would relate to the language of the existing terrace, with bipartite division of the horizontal plane; secondly, the corner would introduce a splayed vertical element that marks the ground-floor hospitality function while also allowing for a new architectural language to be developed along Miles Street; and finally a subdued masonry-like configuration of the rear facade on High Holborn Street would provide an appropriate residential address to the development. In order to successfully achieve this act of architectonic gymnastics, Smart Design Studio has had to take a somewhat riskier approach than is normally seen in Sydney. Rather than completely defer to the language of the terrace, the architects have respectfully done so on the Crown Street facade, yet defiantly stated their independence on the Miles Street facade. The game played is one of pure formalism, as the terrace is only retained in fragmentary remnants that emerge in bits and pieces as required. The interior of the old terrace has been erased to allow for the multiple functions of the new project to work. One of the most striking features of the exterior is the white tile cladding. Close to home, the tiles are reminiscent of the Sydney Opera House, but also hark back to traditional Portuguese architecture, with Surry Hills having a long association with the Portuguese community.

The entire ground floor is dedicated to a hospitality tenancy and the two upper floors hold residential apartments. An interesting aspect of the project is that the developer built the apartments to be long-term rentals, rather than “build and buy.” This meant that Smart Design Studio could be more adventurous in the design of the interior of the residences than a conventional speculative development may have permitted. While the exterior of the building is in glistening white, the residential entry at the rear immediately introduces colour. A dark, forest green and peach pink greet you at the main door. White is banished in the stairwell as you are immersed in greens and blues. The flooring is a black hexagonal tile with blue grout. This flooring continues into each of the residences, changing from black to white over the threshold. Within each unit the grout and joinery has been matched, so that in some the white hexagonal tile is grouted in a burnt sienna colour with matching kitchen and bathroom cabinetry, whereas in others it is powder blue or moss green. The residences on the first floor have exposed concrete ceilings, which, together with the tiled floors, push the boundaries of finishes in multiresidential developments in Sydney.

This development has added to the urban fabric of Surry Hills, and it has done so in an explosive fashion. Like the winged form of its facade, it is simultaneously respectful and disruptive, decorous and daring. Careful consideration, analysis and integration of the extant terrace allowed Smart Design Studio to acknowledge what good the past has to offer, but also to propose innovation where opportunity invited. 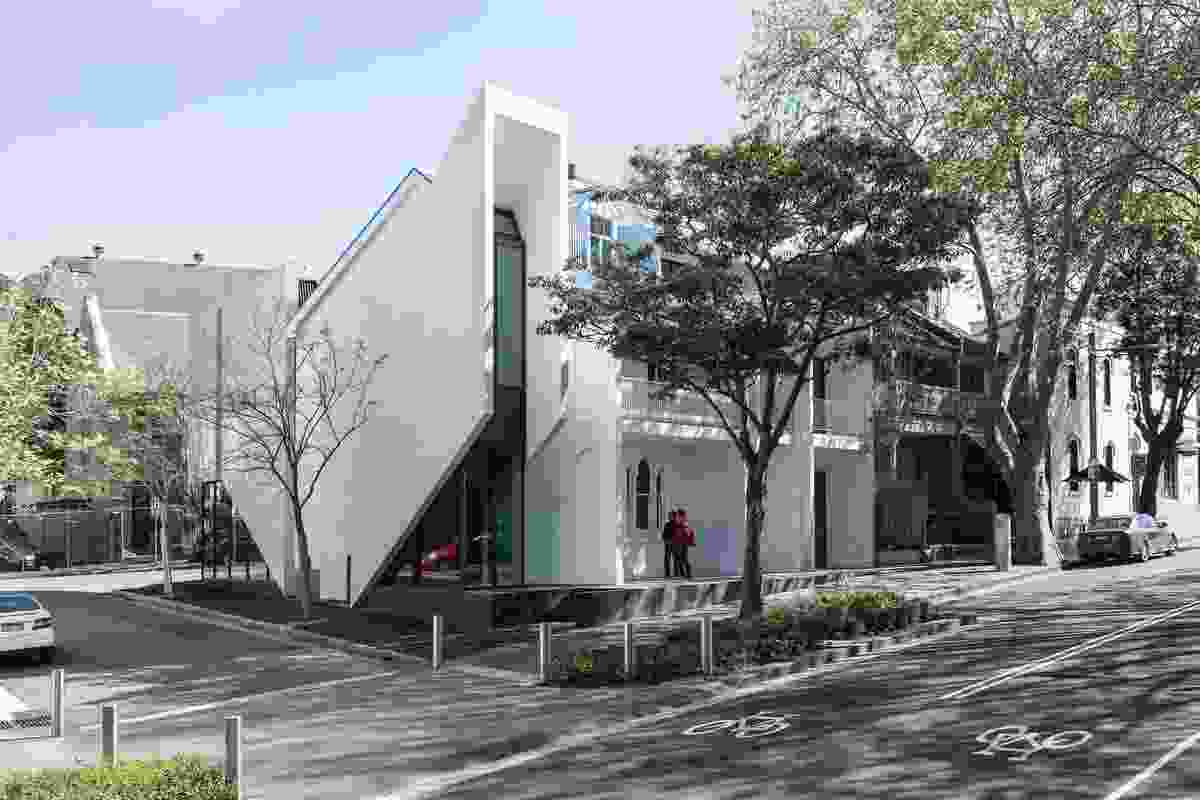 White tile cladding applied to the new component is reminiscent of the Sydney Opera House as well as the long association that Surry Hills has with the Portuguese community. 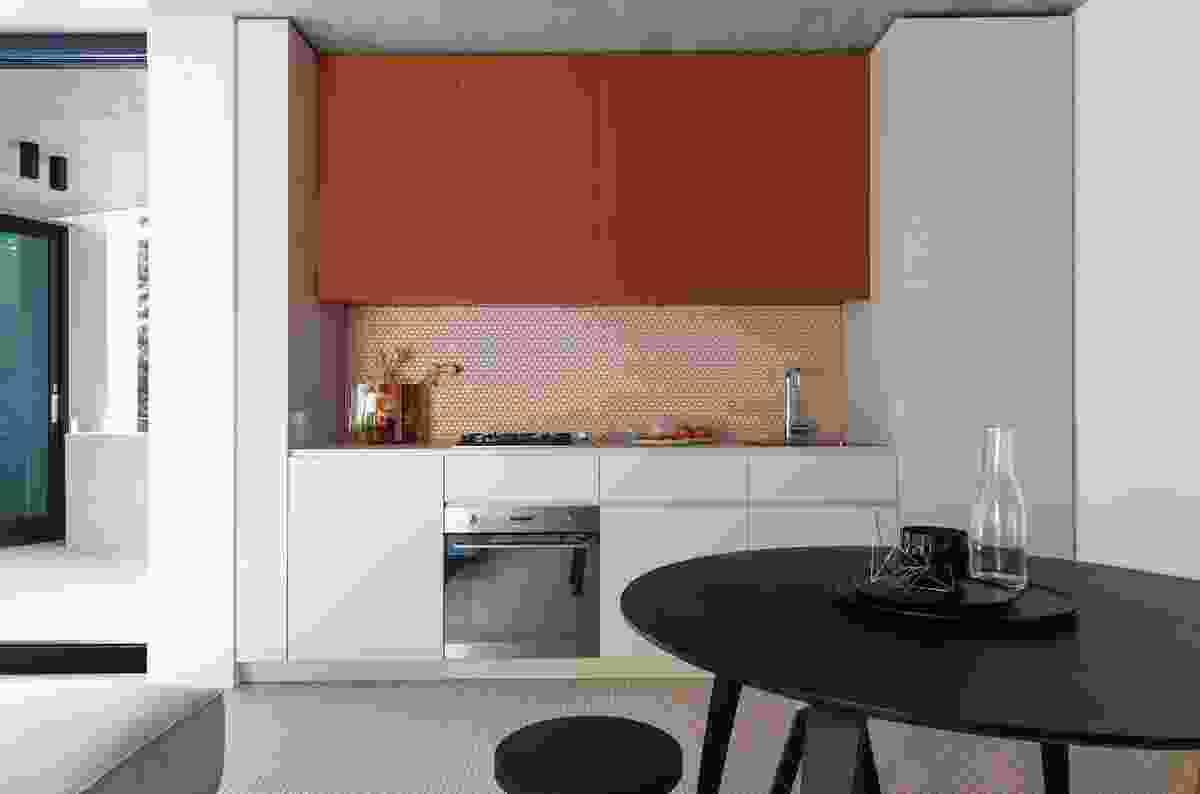 Within each unit the tile grout and joinery has been colour matched. A burnt sienna colour palette has been used in the two-bedroom first-floor apartment. 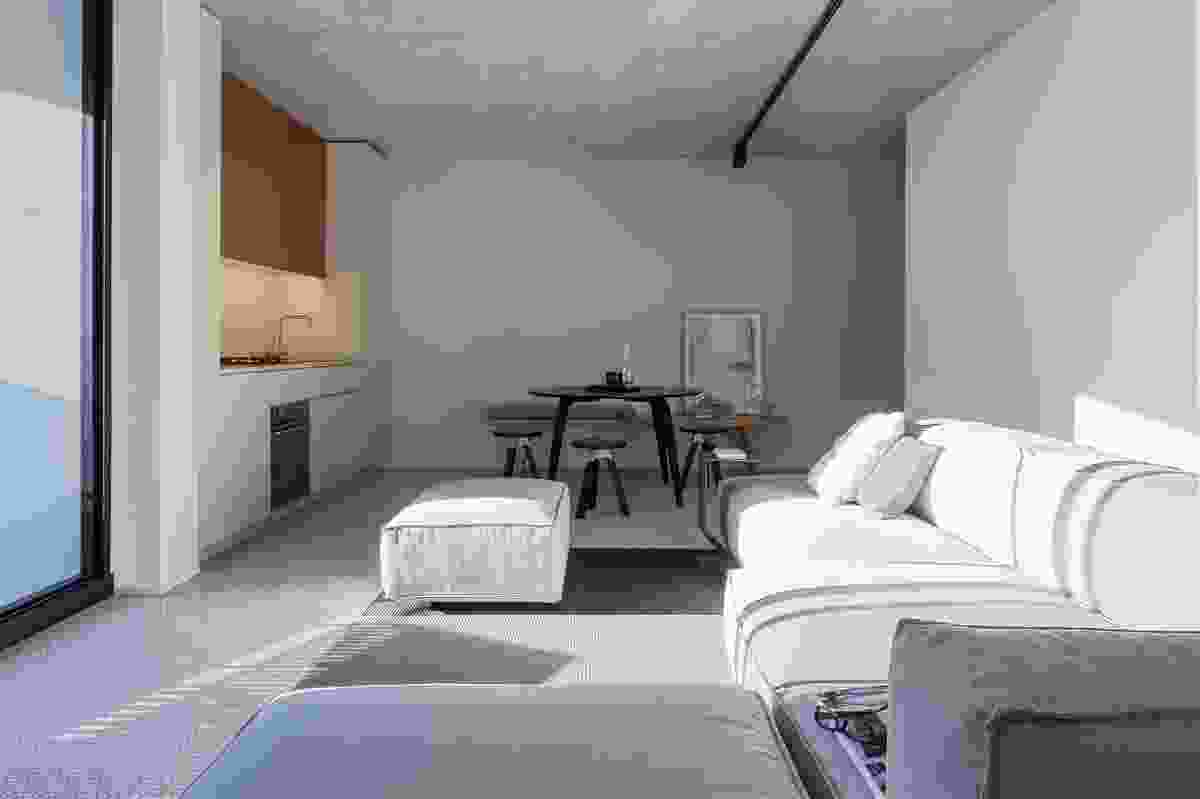 The apartment interiors push the boundaries of what is expected in multiresidential developments in Sydney. Artwork: David Band, Untitled No. 1 (in collaboration with Fraser Taylor) , 2007. 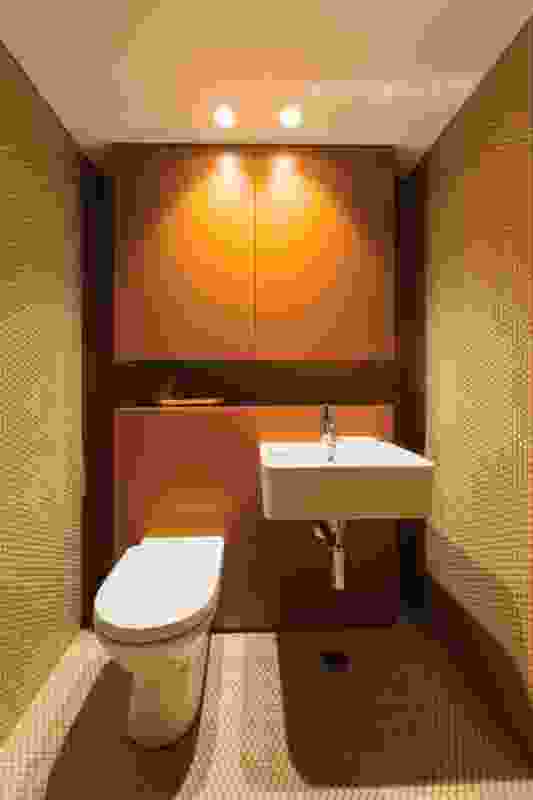 The colour scheme of the bathroom cabinetry in each apartment matches the corresponding kitchen. 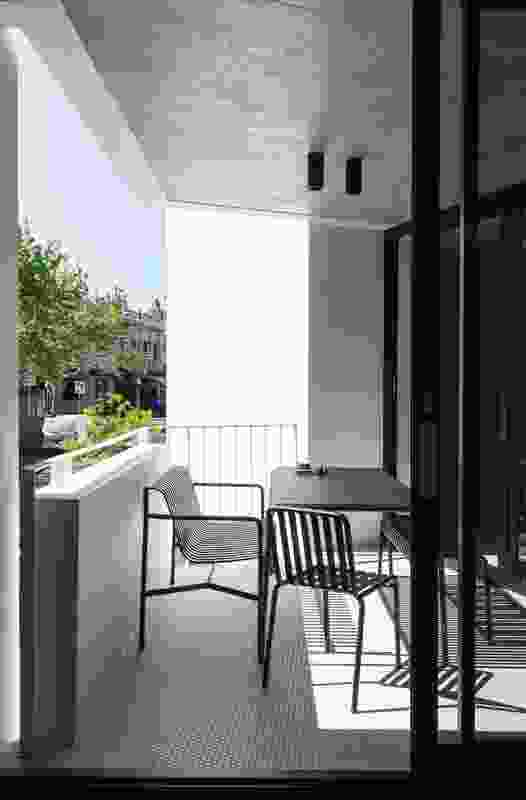 A small balcony pocket forms an external junction between one of the bedrooms and the living area in the two west-facing apartments. 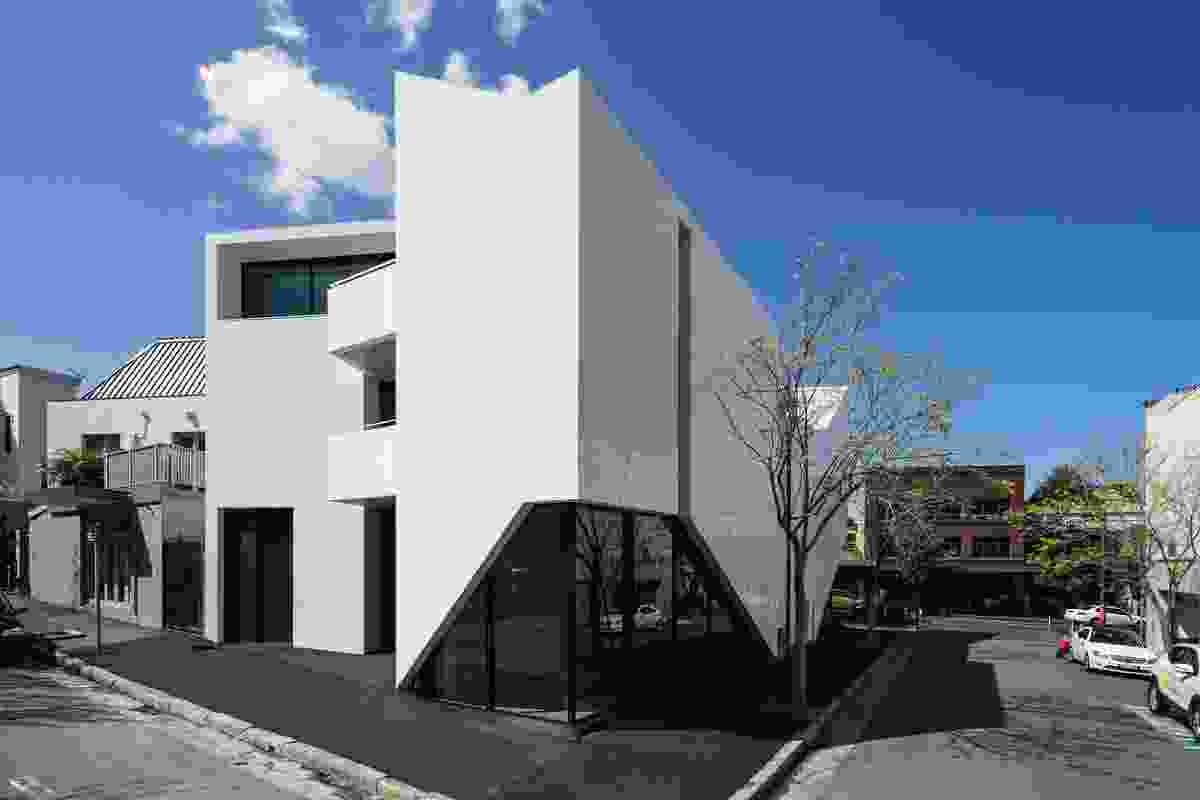 The western facade provides an appropriate residential address for the apartments, with the ground-floor hospitality tenancy taking the more public Crown Street entry. 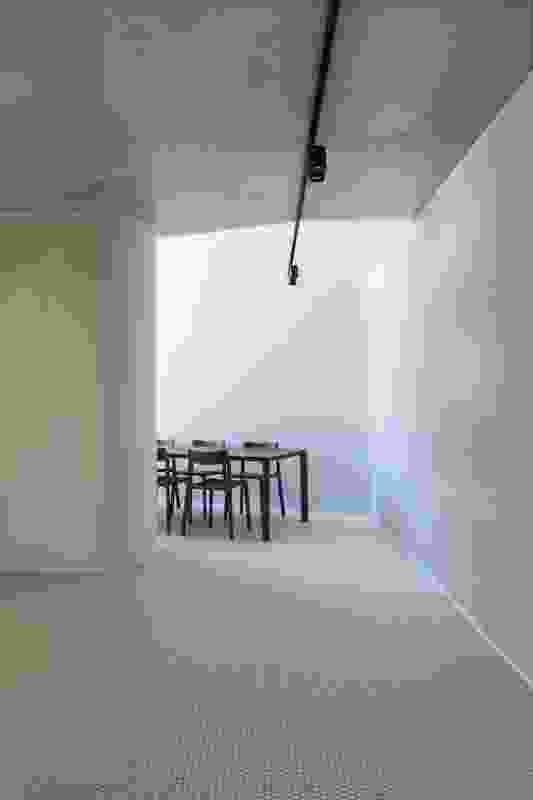 The winged form of the facade houses the well-lit dining space of one of the one-bedroom first-floor apartments. 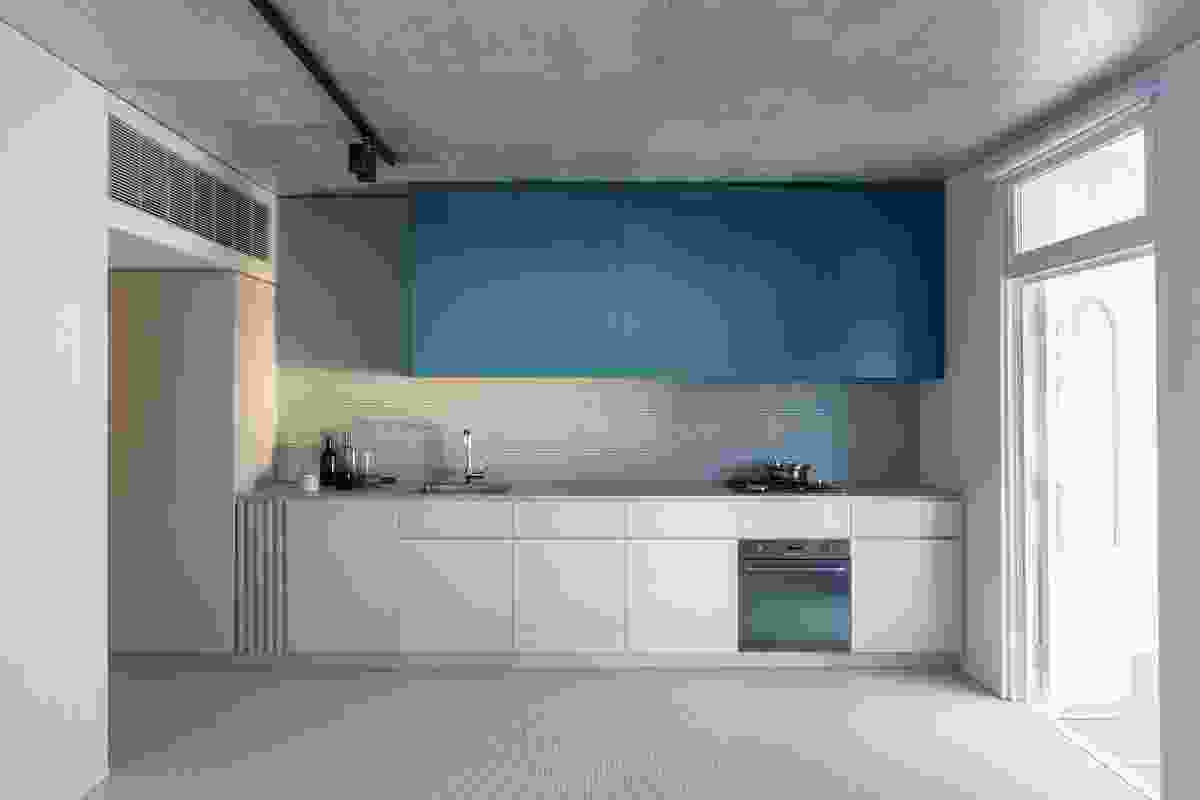 The interior of the old terrace has been erased, but the original terrace openings form an entry to the balcony of a first-floor apartment.