A house by Loucas Zahos Architects fits neatly into the fibro beach shack culture of the Sunshine Coast, built in proportion to the weekenders of Currimundi.

The facade with perforated anodized panels.

If the old fibro beach shack strikes an elegiac chord in your heart, then Currimundi on Queensland’s Sunshine Coast will have you weeping. In this enclave, which boasts sea-gazing perches atop its sand dunes as well as sequestered lakeside retreats, there are still plenty of remnant specimens of genus beach shack.

In its more pristine days, before the incursion of inland canal developments, Currimundi Lake was a marine garden of variety, depth and beauty. The old girl hasn’t lost it all but, perhaps as a consequence of forced sharing of her water supply, the tidal lake endures regular silting up and is shallower than in earlier times.

In short, it’s a place for fossicking, fishing and mucking about in boats (and there’s a mean surf break too).

A nature reserve on the northern side of the lake exhibits the wildness that attracted the early adopters, and banksia forests fringe the shores. In short, it’s a place for fossicking, fishing and mucking about in boats (and there’s a mean surf break too). Fancy restaurants and glam shops are the preserve of Noosa, eighty kilometres north. Back at Curra, as the locals call it, fish-and-chip cafes and bait shops do just fine.

Properties in the area tend to be held on to by families over the generations. The idyll of humble proportions and materials largely persists in the structures, although supersized and luxury homes are starting to make an entry too. When architect Con Zahos, of Loucas Zahos Architects, first met the owners of this house, they had carefully measured every room of its predecessor, one of the historic fibro beauties. Their decision to rebuild came with the strict brief to retain a similar scale in both room size and number. Wisdom indeed.

But the driving force in the architectural design came from another pre-existing feature in the landscape.

“When I first met the clients on site, there was an old fibro cottage there on top of the dune,” says Con. “The street frontage is quite traditional and there was no relationship between it and the beach. It wasn’t until you walked up the steep sand dune through a rainforest track that you could even register the presence of the beach in front. And there it is, suddenly, an unobstructed view. A lovely surprise.”

The magical transition from suburban street to open beach has been reworked and capitalized on in the new building and layout. Tangled plantings of vine-encrusted natives have been re-established beside a meandering track that winds its way uphill from the street to the front door. A two-level structure near the entry serves as a lock-up garage/gatehouse topped by an open carport and sunset pergola lookout. The driveway curves further uphill, allowing for a loading dock next to the kitchen.

The solidity of the house diminishes from the front door in a slow unravelling that lets nature eventually preside. The grassy terrace on the beach side is blurred with the living area’s floor plate, and covered by a mere handkerchief of canvas. Back at the street-side entry point, the home’s elevation has a strong presence, and is dominant through its sheer height and the use of a single wall plane. The facade is delightfully splintered by anodized aluminium panels that act as sunscreens. Each is punched and perforated with a pattern taken from the local foliage, and the seven different bark-like colours applied in the finish give the appearance of natural ageing taking place.

The interior spaces are anchored by rammed earth walls that house service and wet areas. The stacked entry pavilion has bedrooms upstairs and living below, then peels off into a one-level space wrapping around a northern courtyard.

Rugged structural timber beams collected from the owners’ historic rural property form part of the simple, organic palette. Timber floors indicate the circulation zones through the U-shaped plan; there is a clear passage from front to back, with the route going around the central north-facing loggia. Ritek roofs float above a glass clerestory, which is tilted and angled like the canvas fly set up over the grass.

To all appearances the roof, pinned and tensioned and supported by simple posts, is a lightweight element doubling as the interior ceiling and strung between the skeletal framework. Sight lines from the upper level of the western pavilion are carefully wrought, with the lower pavilion roof dipping out of view as the eye looks to the ocean beyond.

Operable glazed walls and open-up and shut-down spaces replicate the condition of camping, while offering more transparency than a tent. Who needs more than 250 square metres of shelter when the sky and the sand beckon? Modesty of scale aside, the arrangement of spaces around winter and summer boltholes, and laid-back communal gathering areas and more refined private retreats, are what will have this house lasting through generations. 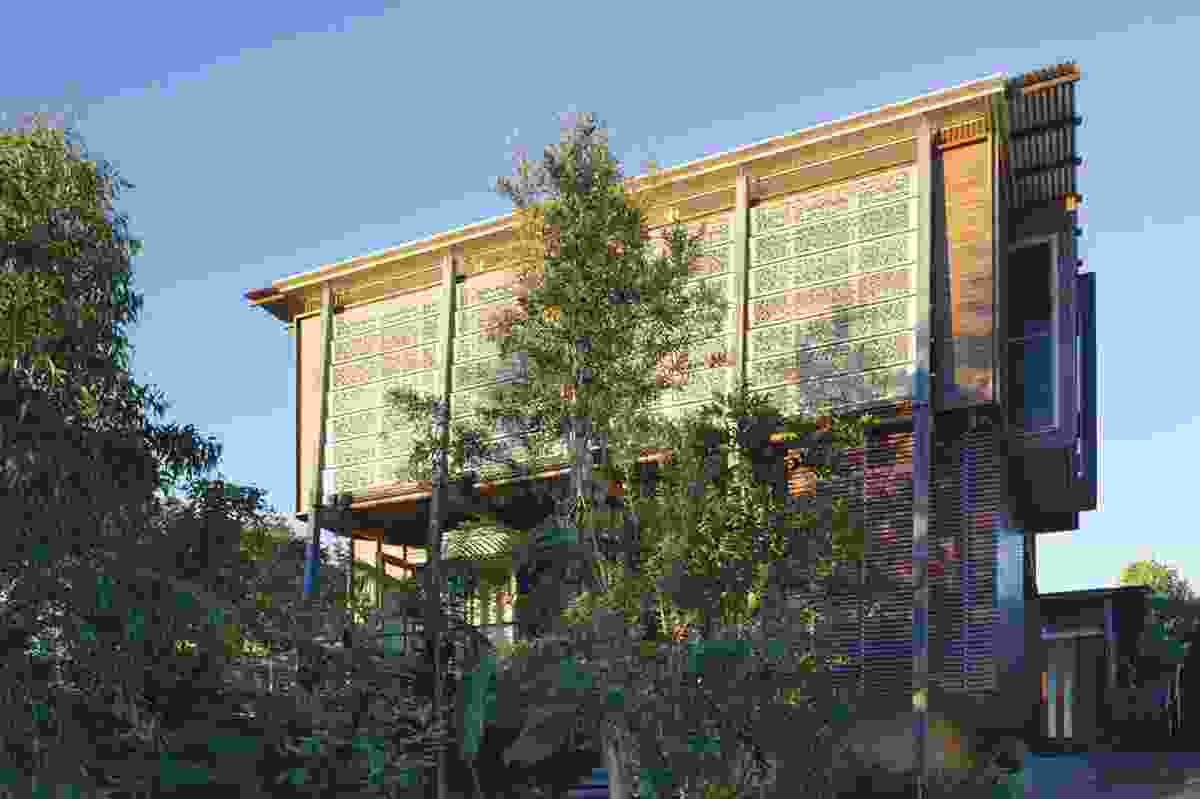 The facade with perforated anodized panels. 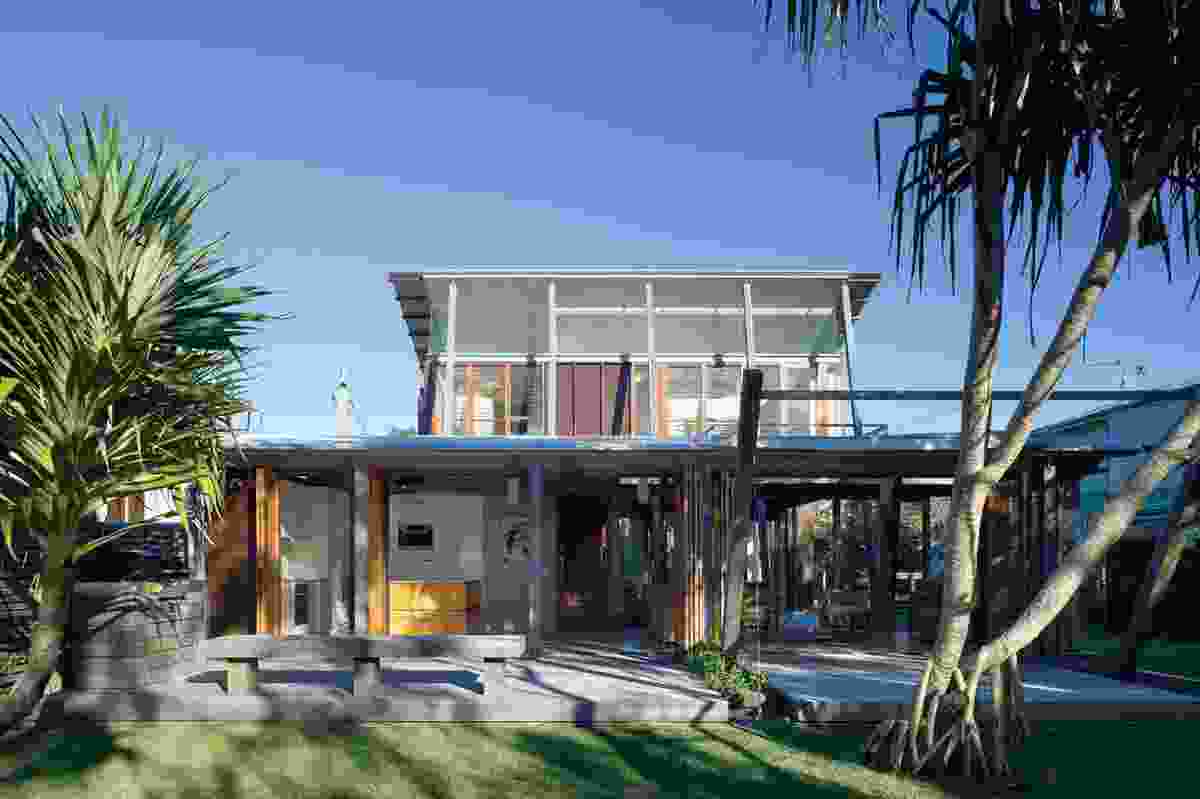 A tilted roof floats above a glazed clerestory. 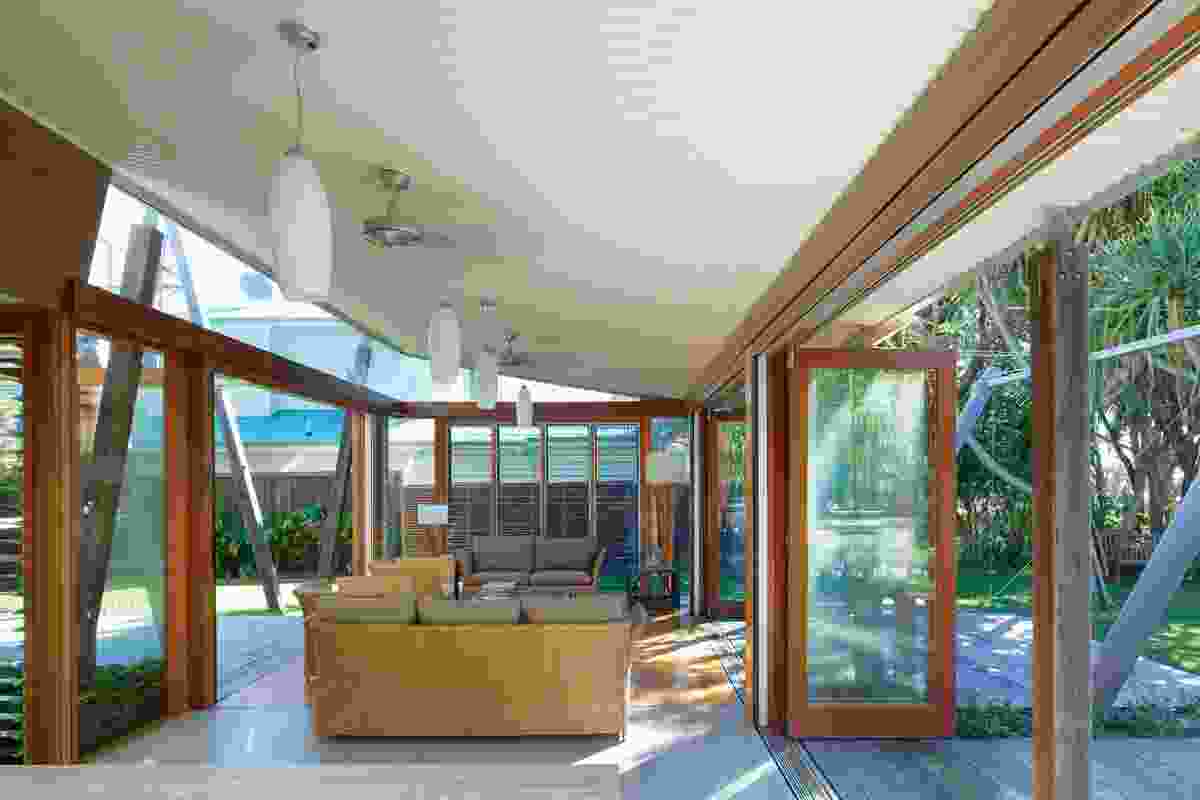 The living spaces “offer more transparency than a tent.” 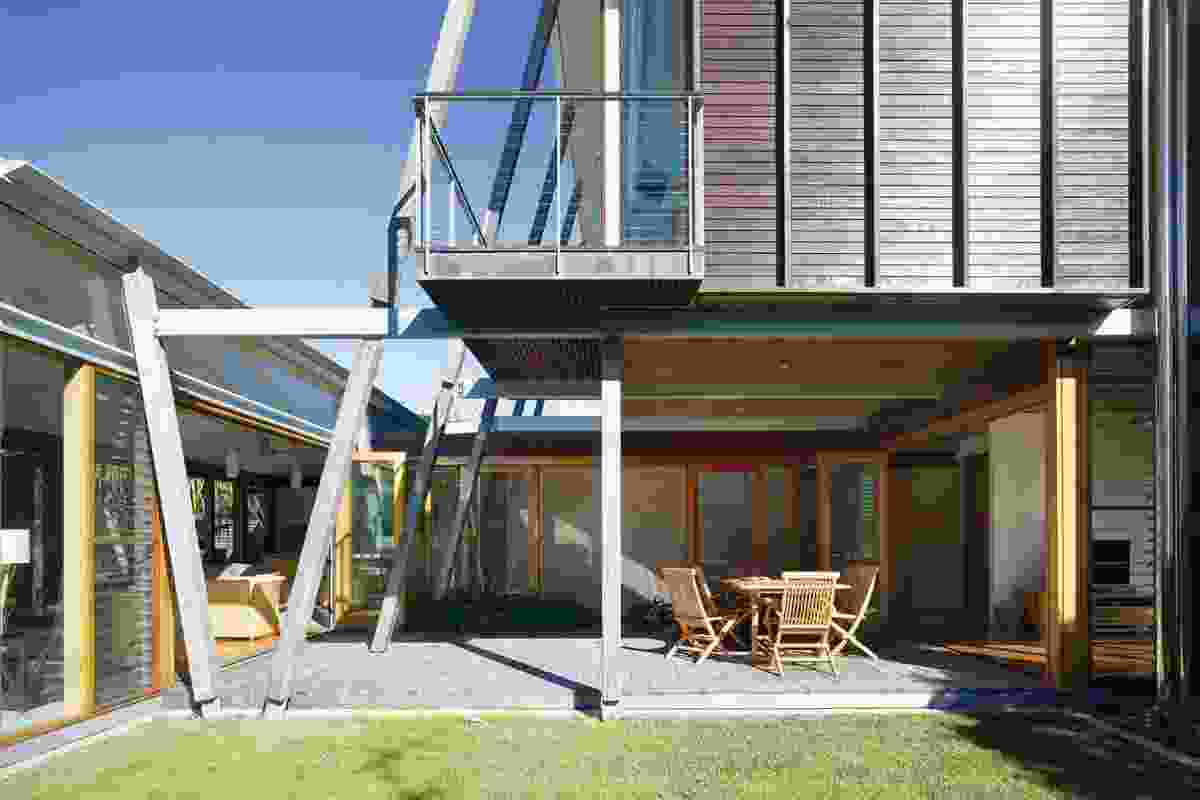 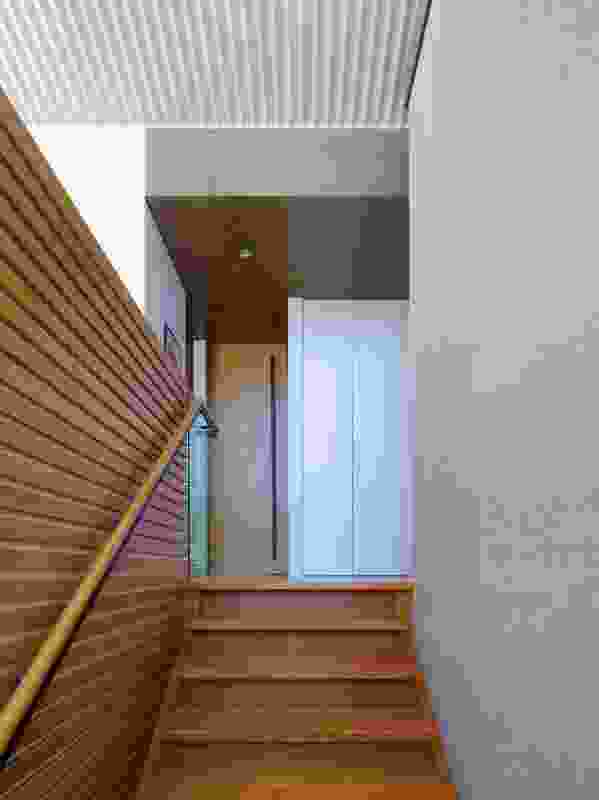 Most of the bedrooms are located on the upper level. 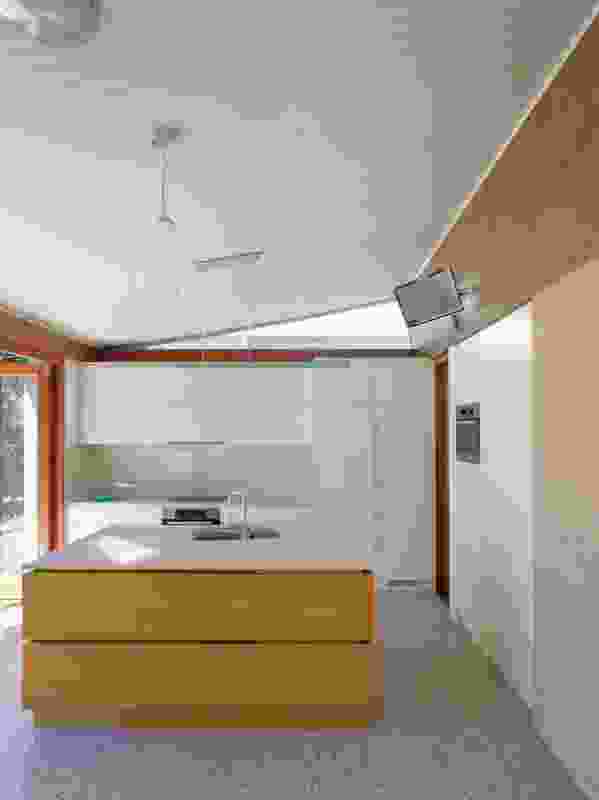 The kitchen is tucked at the end of the living spaces. 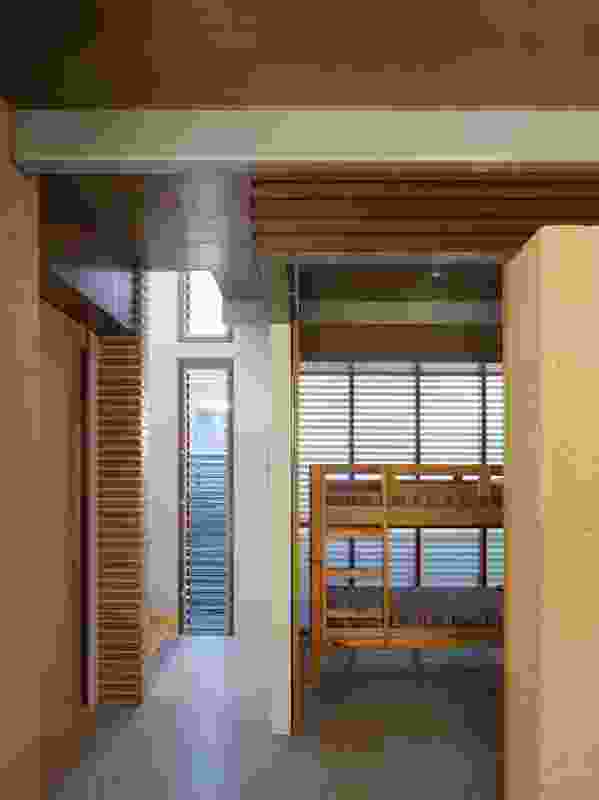 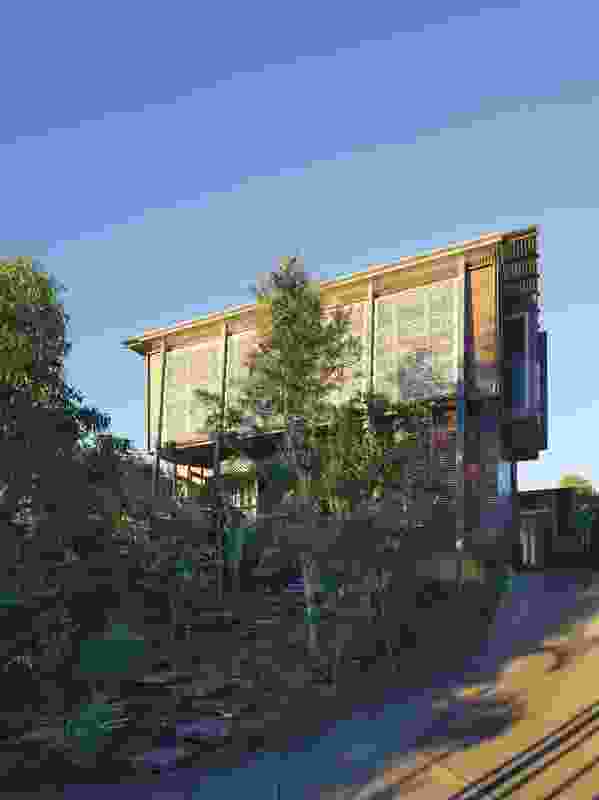