The original plan of this semidetached home has been “unlocked” by Marston Architects to allow light and air into an elegant and finely detailed alteration and addition.

Two full-height pivot doors define the living zone and frame the view to the terraced garden.

The eastern Sydney suburb of Queens Park is part of a significant urban green belt comprised of Centennial Park, Moore Park and its namesake, Queens Park. The leafy green streets that shaded me en route to the house hint at the nearby parkland amenity. The suburb is equally reflective of its earlier title – it was originally classified as part of Bondi Junction. This is evident in the suburb’s density and the impression of houses seemingly competing with one another for space and views. The D House by Marston Architects straddles this interesting junction of parkland and density, and responds with sensitivity to the urban challenges that are associated with such a site.

The house is located in a heritage conservation area, and architects Pip Marston and Matt Argent recall the local council’s condition that the original semidetached dwelling remain intact. With an existing “problematic” kitchen extension, the original house was disconnected from the garden and street. Dark and poky interiors were a result of not adequately addressing the site’s poor orientation. The dual interface – with a public street to the west and a service laneway to the east – contributed to poor privacy and overlooking.

The client’s brief was very clear and called for a dwelling that celebrated natural light, reconnected the home to the garden and provided adequate privacy. Most importantly, the clients expressed desire for their house to be a retreat within the surrounding dense neighbourhood. Functionally, the brief requested a new bedroom, study, kitchen and bathroom. It was essential for the project to comfortably accommodate the couple (and their two dogs) for the time being, and to also incorporate flexibility for future expansion.

The first significant move Marston Architects made was to demolish the kitchen extension. “This was fundamental in unlocking the existing house plan … in opening it up to the light and providing the opportunity to consolidate the existing and new ambitions,” says Pip. On arrival at the house you are met with a view to the garden, offered through a northern breezeway that organizes the house. The breezeway establishes transparency and reconnects the home to the street and garden, introducing natural light deep into the plan and defining a new circulation spine. Original brickwork has been exposed by removing the plaster, revealing a hidden urban character and forgotten history – scorched bricks are “a subtle reminder of the fireplace that was once there, a memory of the past,” Pip says.

As you move along the breezeway, the transition between old and new is defined. Each has a notably different spatial quality. The original house retains a cosy intimacy, while the extension is transformative in introducing light and air into the contemporary split-level home. Despite the varying spatial experiences, cohesiveness is established through the material uniformity of the brick breezeway. This consistency is due to the recycling of bricks from the earlier kitchen demolition, which proved to be a perfect match for the extension.

The sloping site is used to provide a split-level solution for the extension. The threshold between the old and new marks a point of choice: either up to the new main bedroom, ensuite and study or down to the living room and garden. The bedroom encourages the client to mediate and determine their desired level of privacy. A large, full-height opening welcomes a delightful view across the garden and beyond to the terracotta roofs and backyards of neighbouring houses. The opening aligns with the breezeway and conforms to the new house logic, encouraging light and openness at either end of the plan. Operable blinds, concealed within the head of the opening, alternatively allow complete privacy to the bedroom.

A linear skylight lets in soft natural light and articulates the transition to the living room. Two impressive full-height pivot doors define the space and frame the view to the stepping terraced garden and sky. When opened, the doors are neatly caught by planter beds, inviting in the scent of fragrant curry tree, lavender and native kangaroo paw, blurring the line between the inside and outside. While the garden is humble, its scale is made deceptively more generous by the welcoming gesture of the internal living area opening out.

Marston Architects cares deeply about the role of materials in space-making, maintenance and sustainability. This is particularly apparent in the living space, where the concrete floor and wall finish match, giving the impression of one folding into the other. The reflective waxy finish equally serves to bounce sunlight and catch colours from the garden.

The architects have skilfully resolved a number of challenging site conditions to achieve both light and privacy. There is great depth and rigour to the work, and the value placed on the collaborative process between the client and architect is clear. The D House has a sense of calmness, delivering the client’s wish for an urban retreat – a difficult feat in a dense inner-city suburb. 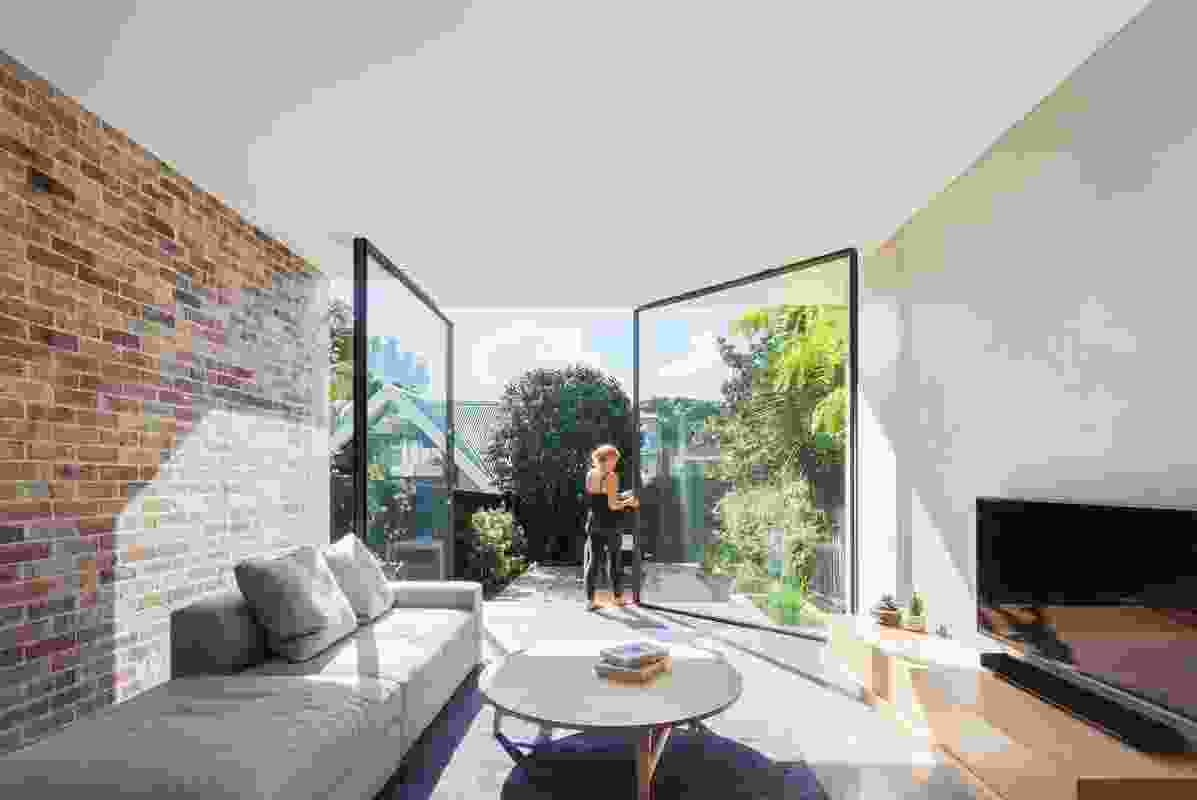 Two full-height pivot doors define the living zone and frame the view to the terraced garden. 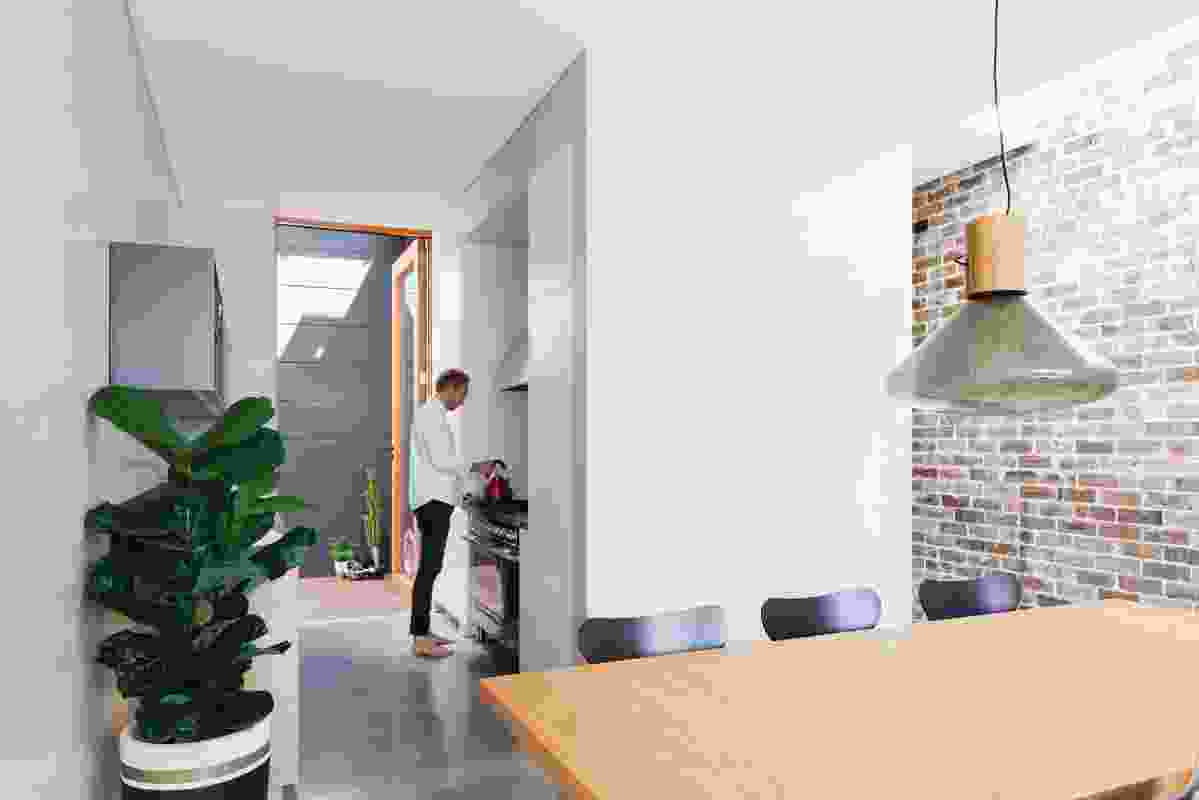 The kitchen is tucked alongside the main circulation zone and connected to the main living area. 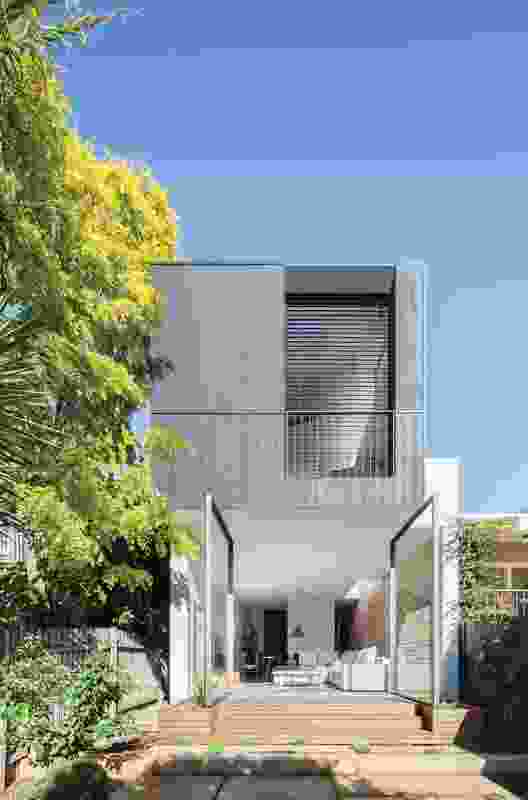 The rear elevation is simple in form and balances privacy with openness. 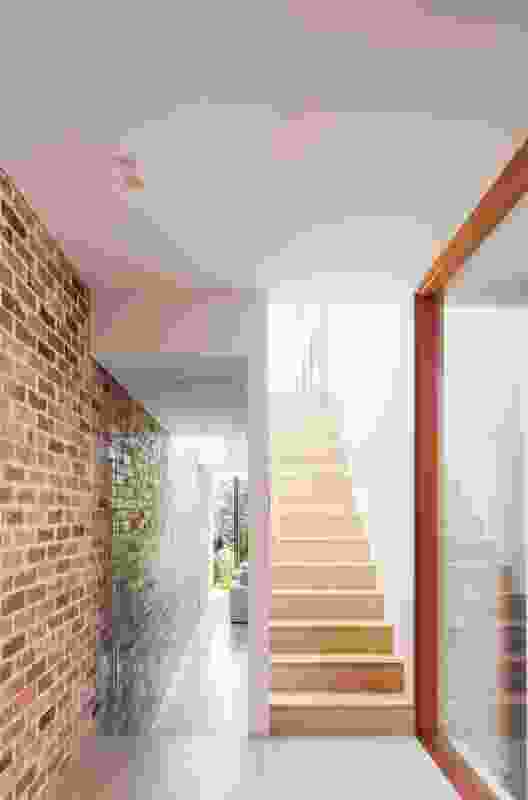 The threshold between old and new marks a point of choice: either up to the bedroom, ensuite and study or down to the living room and garden. 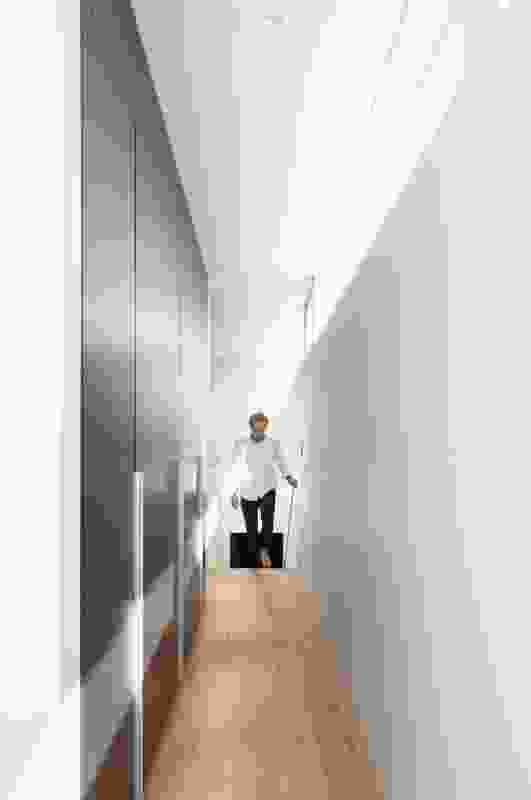 On the upper level, a robe is contained within the hallway leading to the main bedroom. 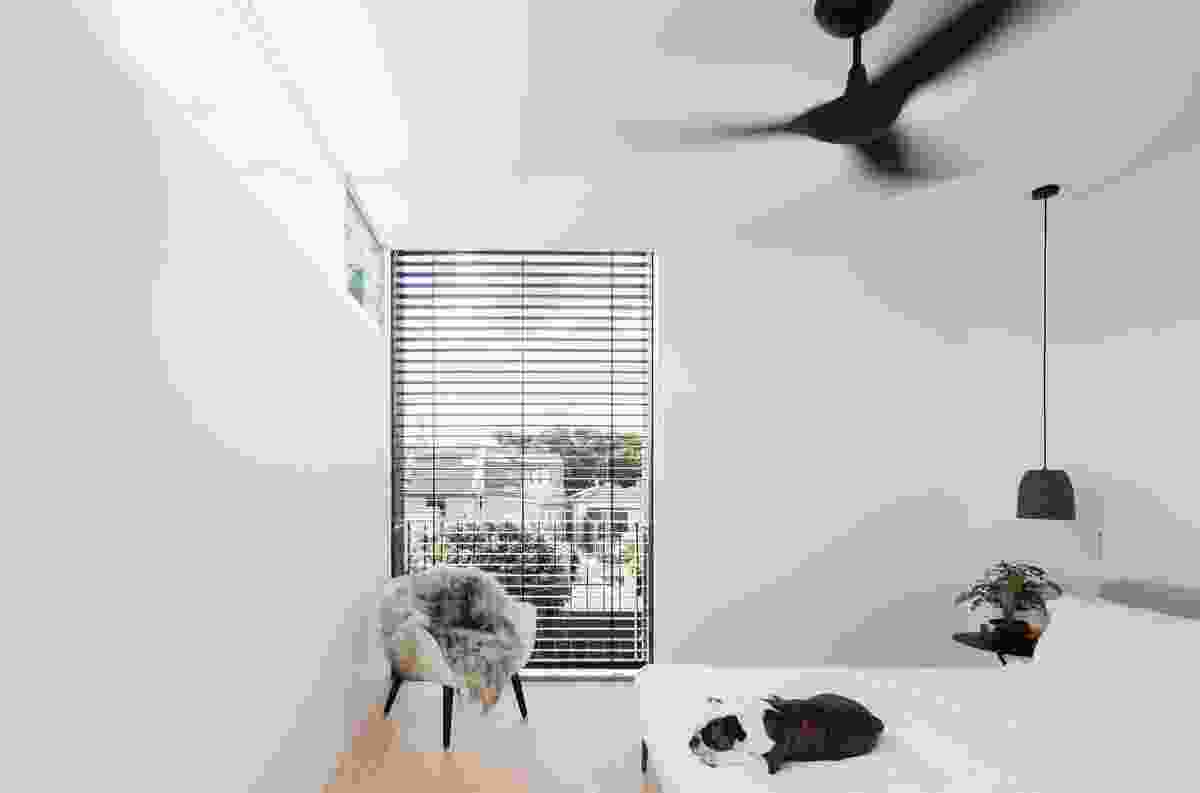 A large, full-height window in the main bedroom has a view into the garden and across neighbouring rooftops. 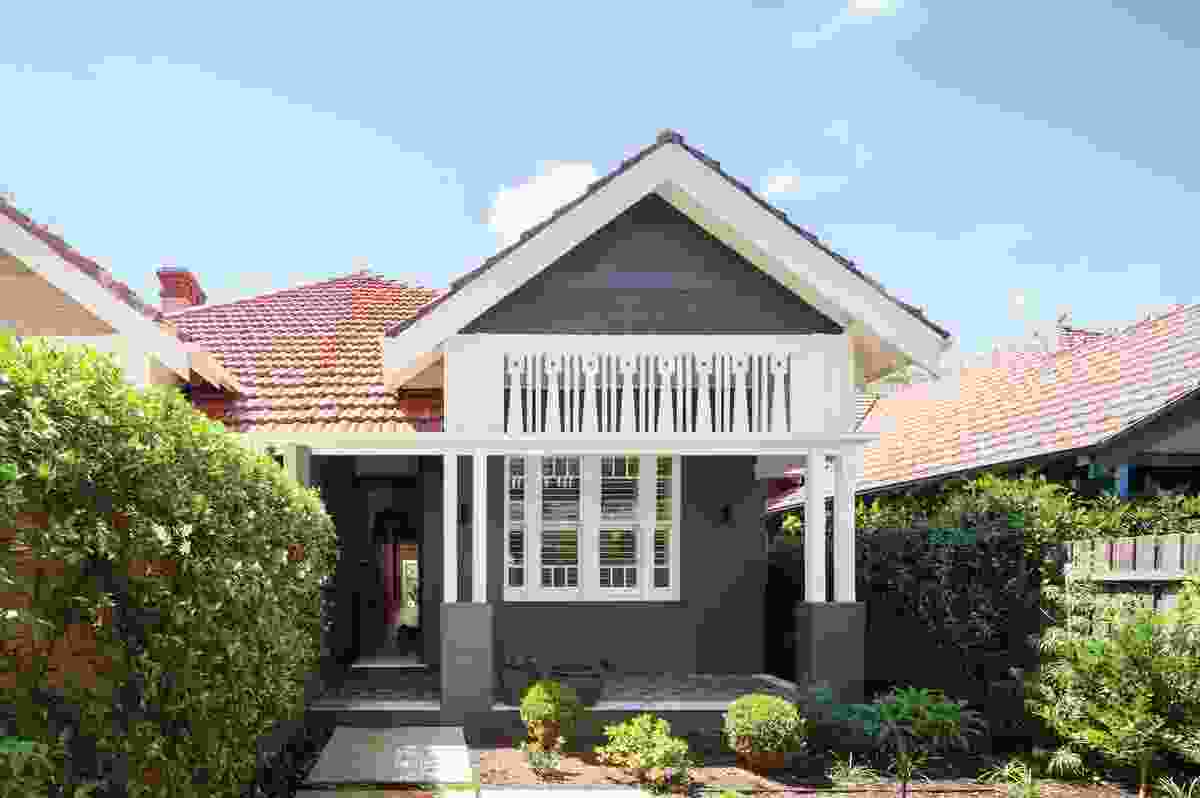 The semidetached house is located in a heritage conservation area, requiring the front facade to remain intact.