The new visitor centre by Malcolm Middleton Architects with AECOM adds a human dimension to civic infrastructure, with landscape architecture by Andrew Neighbour and John Donoghue.

Midway through the first decade of this century drought beset much of Australia. Urban areas in south-east Queensland, especially, experienced water shortages. Local and state governments responded with decisions to build a desalination plant on the Gold Coast and a water grid connecting the water resources of the region, and to raise the wall of the Hinze Dam, the city’s major water reservoir. A concerted public-education campaign elicited impressive community response, which reduced per capita water consumption by 50 percent.

With the dam’s capacity increased, there would be a need for a visitor and information centre to continue the water-education campaign. But the project proponents, with their focus understandably on the logistics of a five-year civil construction program, barely advanced this building brief beyond basic accommodation needs, car parking and desirable landscape treatments.

Big civil projects like dam walls are usually partially accessible, typically permitting a stroll along the fenced top edge. After the awestruck reaction to scale, an appreciation of the panorama from the novel vantage point and perhaps some marvelling at the engineering acumen, the visitor retreats somewhere for shelter, maybe information and usually food. But all too often the facility, if it exists at all, is miniscule by comparison, attempts “national parks rustic” architecture and elicits a sense of anti-climax. To its credit, the Gold Coast City Council, a Hinze Dam Alliance partner, wanted a public asset that was not shy, not an afterthought and not a flimsy expression of “sticks and skillions.” Fortunately, too, the masterful Lahz Nimmo precedents in Sydney’s Centennial Park and at Warragamba Dam (Architecture Australia Jan/Feb 2011), which legitimize the marriage of exemplary architecture with public amenities, strengthened the resolve to deliver a public asset of quality.

For the visitor centre, the client designated a small knoll that enjoyed an outlook southwards over a flat peninsula towards the vast waterway and hinterland beyond. This ideal vantage point, level with the top and within one hundred metres of the proposed new dam wall, was optimized in a design that orchestrated the progressive revelation of the panorama and indeed the visitors’ “discovery” of the best vantage point for the spillway. However, the peninsula below had an interim role before it became landscape for the visitor centre because, as flat space, it was suitable for a concrete batching plant. On a site visit, to the architect’s surprise, a third of the knoll had been summarily removed for peninsula enlargement. Undeterred, the team created a cantilevered structure where once there had been earth.

In contrast to the massive scale of the engineered wall, the new visitor building (consisting of a kiosk, an information centre, gathering spaces and amenities) could too easily have become a prosaic, dwarfed and somewhat self-conscious structure, but this potentially inequitable situation was sidestepped using simple strategies. Firstly, the building exudes a steadfast presence on arrival, expressed through strong anchorage to the ground plane and the height is pumped beyond domestic scale. Secondly, the arrival experience itself is addressed by the building’s northern exterior wall, which is aligned as a barrier to the panorama, but with an overtly expressed entrance as the “viewfinder.” Finally, throughout the facility, the small number of enclosable spaces are sheltered under generous roof areas to read collectively as two intersecting rectangular prisms, with the whole much bigger than the fragments.

Three purposely oversized off-form concrete portals mark the centre’s entry and exit points and ultimately the distant “surveyor’s marker” portal beyond, at the southern tip of the peninsula. The “desire paths” of visitors are well predicted and accommodated, giving ample space to discover then savour the outlook. The visitor is then drawn past an active water feature — a movement that is both languid and intuitive — and then through the eastern portal into the landscape to a view of the concrete spillway. There is a seemingly natural progression from within the centre to the broad public green, embraced by rock ballast which mimics distant hill formations and marked by two potential destination points — the concrete portal and the more intimately scaled pavilion by the water.

The journey on foot is long and hot (though vegetation will eventually offer shade), but each turn offers intriguing vistas, perhaps the most noteworthy being the imposing “take us as we are” greywacke quarry shelves to the west and the visitors’ centre, especially when it is viewed against a big sky as it cantilevers over its own rocky batter.

An interpretative sign reminds us that the first rule of dam building is “to source your materials on site because any other method is simply too expensive and disruptive.” Just as the red-coloured clay and greywacke material were sourced on site for the massive earthworks, the visitors’ centre sourced its materials locally, obtaining timber from the site and its immediate surrounds, and concrete and rock from the site, assembling them in a composition of honest and raw materiality that is low maintenance and accented judiciously by paint and timber stain in hues akin to those of the rich clays.

Civil and construction skills were also drawn from the work site, most notably the concrete formworkers who achieved class-two finish to the spillway and who regarded the proposed concrete-framed visitor centre as an all-too-easy challenge, but one which in normal circumstances would have been cost prohibitive on a building of only 940 square metres.

Infrastructure projects are long lasting and rely on luck, tenacity and the ingenuity of the committed players to deliver on the original promise. Most times, quality degenerates to a level that will suffice, and that is all. Yet infrastructure projects are a major public investment and the public deserves outcomes that invite access, lift the spirit and celebrate the strengths of project, be it a dam or a tunnel, and the public-associated facility should also be of a quality that calls for showcasing and celebration.

This project has been blessed with a team of collaborators with a common-sense attitude towards public-realm risk management who delivered a project that can evolve into a major events space, and which is simultaneously sublime in its containment. The building is respectful of and reflects the spectacular engineering and construction know-how employed on the dam, but mostly it is respectful of the client for whom it has, through dedication, delivered a signal to the public that the community is valued and welcomed. 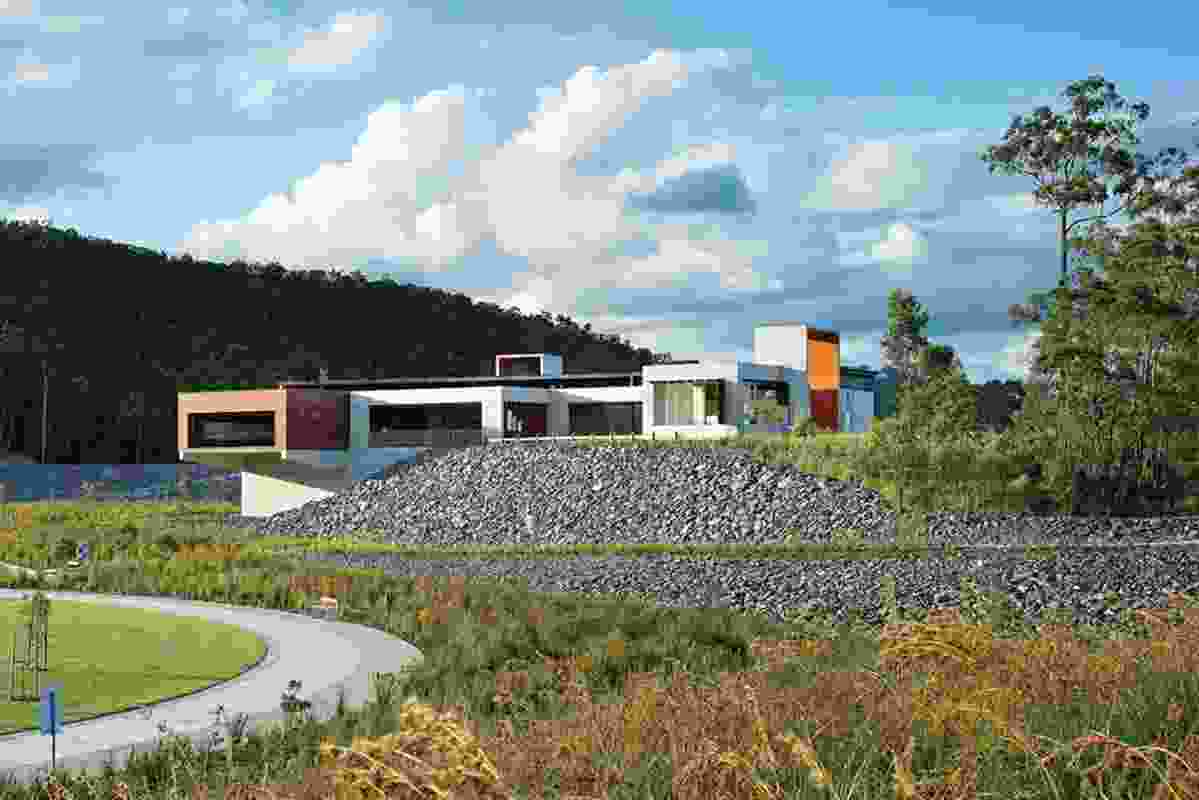 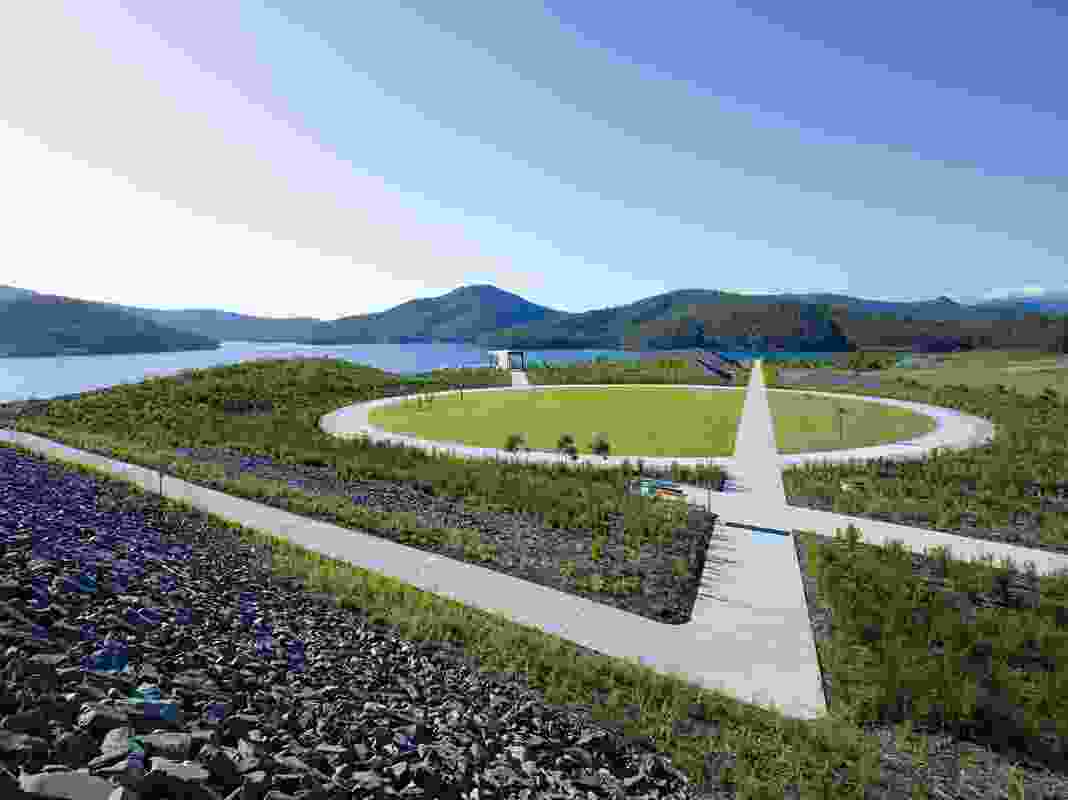 The centre is on a small knoll overlooking the waterway and the Gold Coast hinterland. 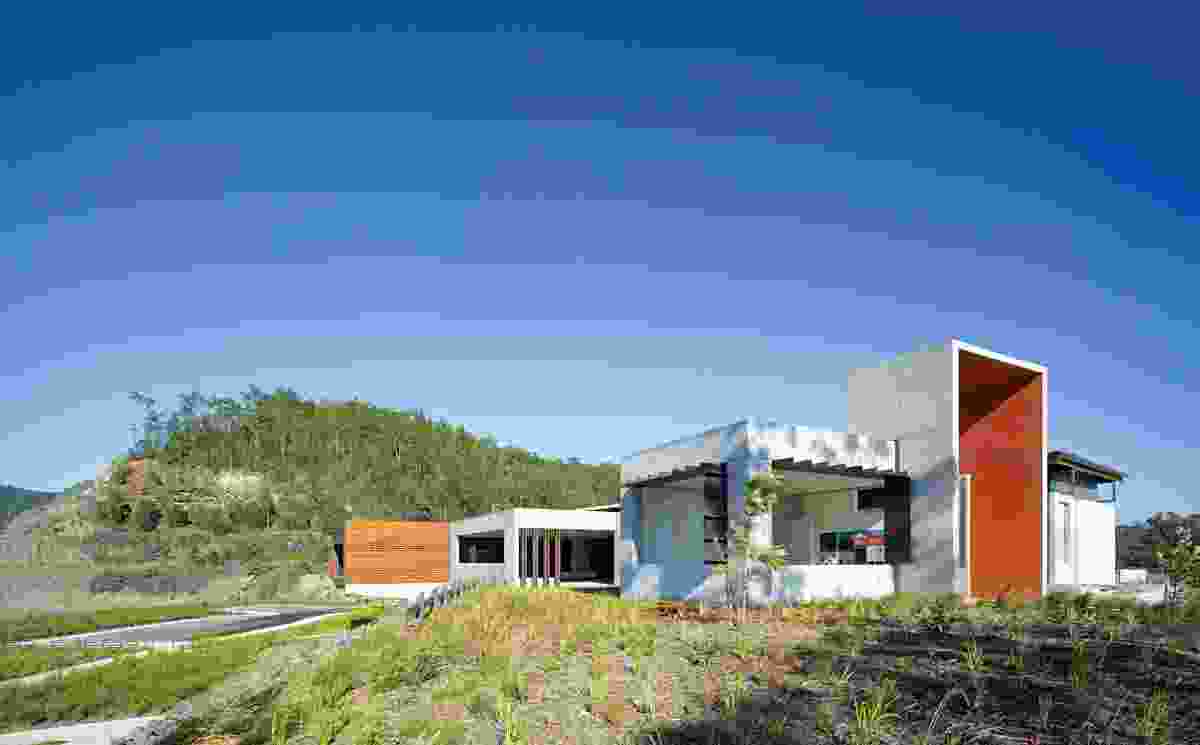 Strongly anchored in the ground plane, the building has a steadfast presence on arrival. 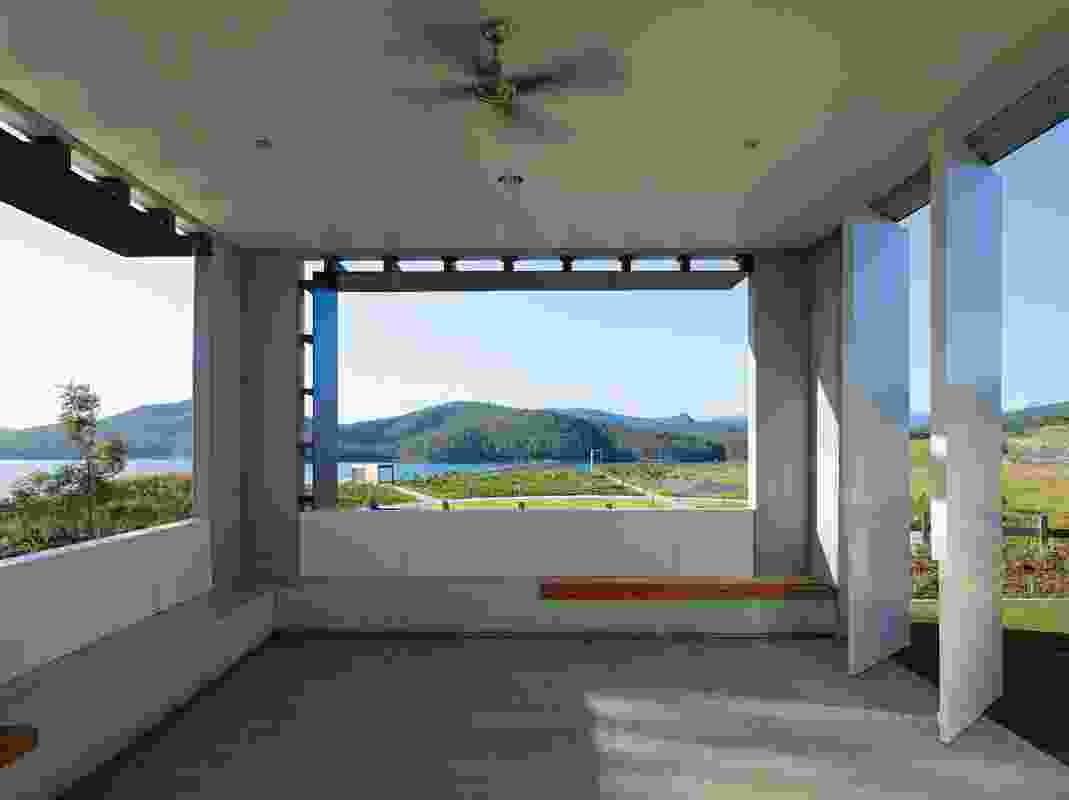 A further “surveyor’s mark” is found beyond the building at the southern tip of the peninsula. 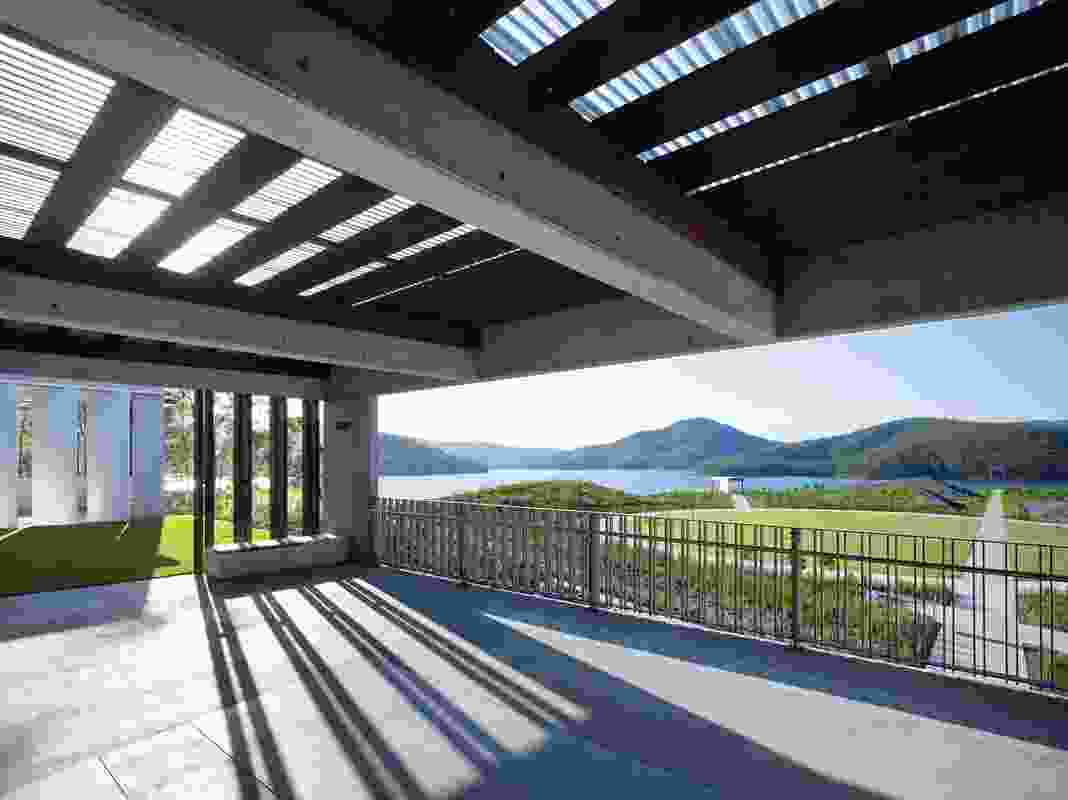 The view of the dam invites visitors to admire a large public investment. 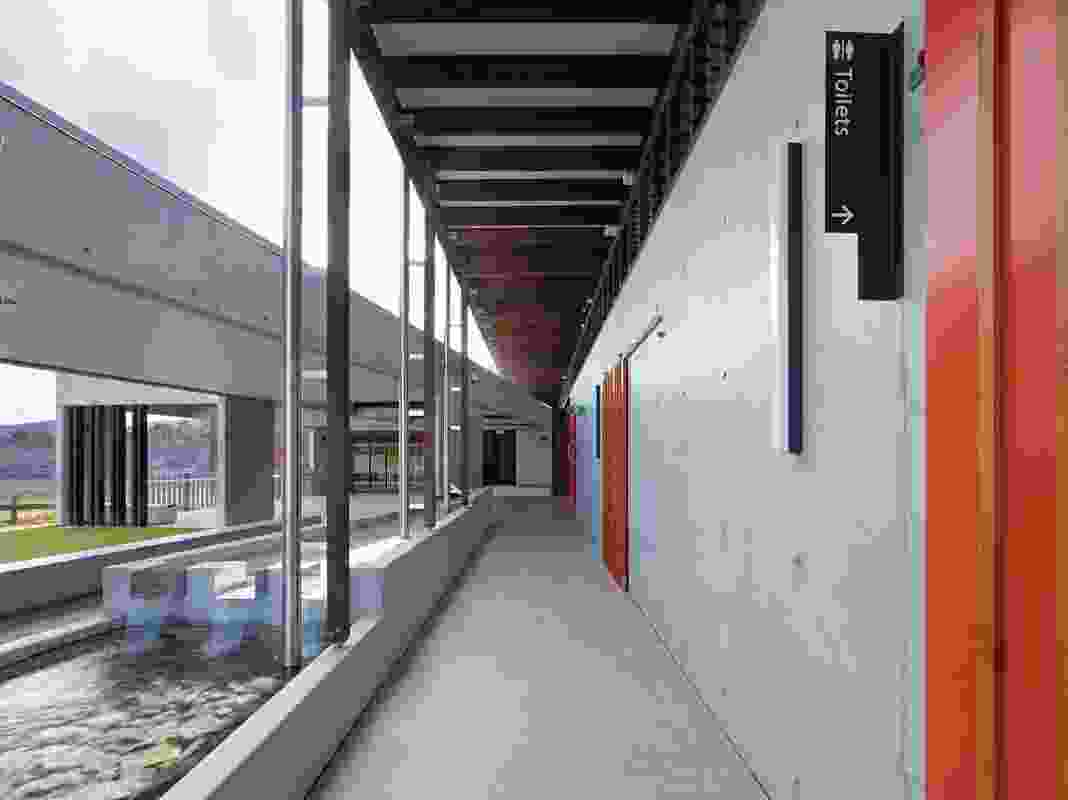 The visitor is drawn past a soothing water feature before turning to face the landscape. 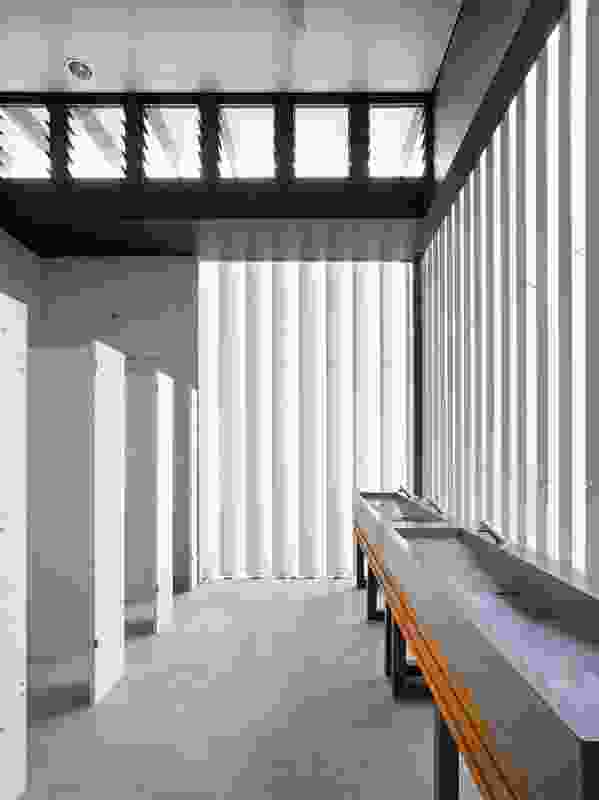 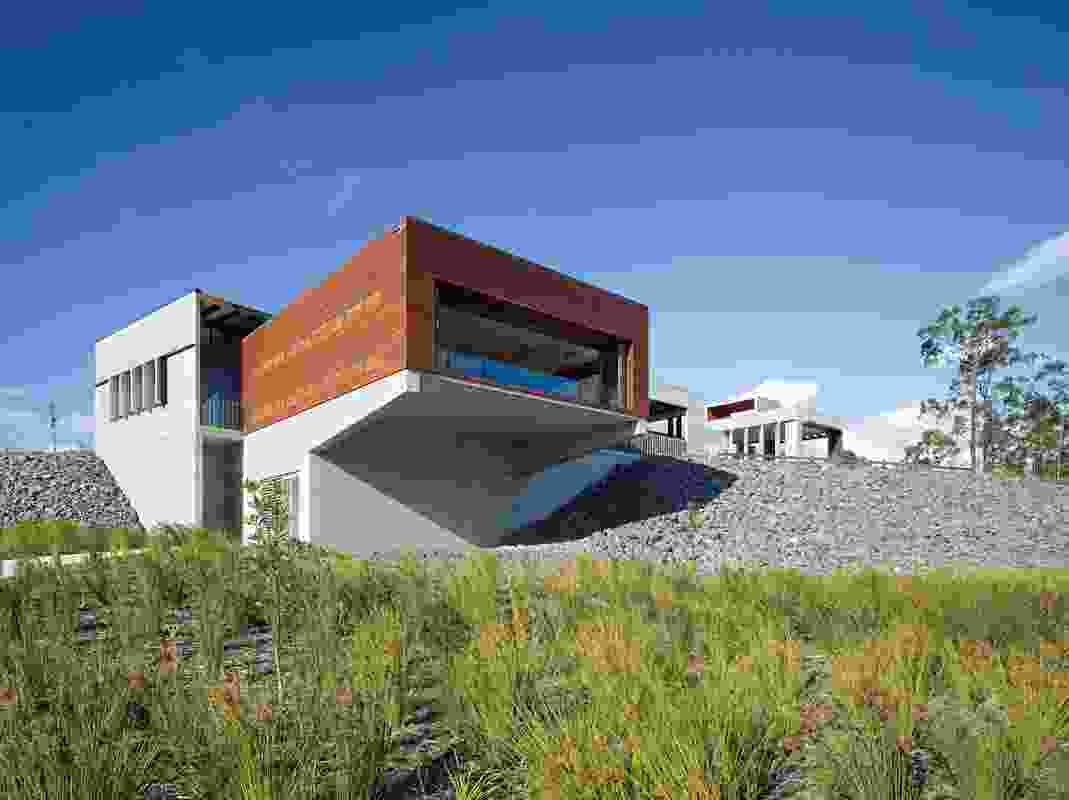 The timber, concrete and rocks used in the construction of the project were all found on site.