Uncle Max Dulumunmun Harrison gives the welcome to country at Deerubbin 2016, in front of the Milson Island Sport and Recreation Centre by Allen Jack + Cottier.

In mid-March, around 150 delegates gathered for the second ever Deerubbin conference – a weekend-long residential seminar hosted by the Architecture Foundation Australia at Milson Island on New South Wales’s Hawkesbury River. The weekend promised “good people and good architecture all together” and it certainly didn’t disappoint.

Uncle Max Dulumunmun Harrison, Aboriginal Elder of the Yuin people, personified the spirit of the gathering with his welcome to country. Filled with generosity and wisdom, this was a greeting from our guide to country, landscape and purpose. Rather than being instructive, Harrison instead set out a path to openness and awareness for us and asked us to think about the place and to question ourselves.

The speakers explored the theme “Hots and Cools” as a subtext for their work, investigating longitude, latitude and altitude within this framework. However a broader theme – one inherent in the approach to all the work discussed – was that of respect.

Many conferences are held together by a theme. The Deerubbin 2016 speakers worked with “Hots and Cools” (not just an instruction for packing – thanks Julie Stout from New Zealand firm Mitchell and Stout Architects). The speakers explored this theme as a subtext for their work, investigating longitude, latitude and altitude within this framework. However a broader theme – one inherent in the approach to all the work discussed – was that of respect. Respect for place, materiality, craft, cultural values, community and each other. This was a weekend based in architecture that speaks to broader issues. It was perhaps this connection between architecture and ideas of community and culture that attracted such a variety of genuinely interested participants and passionate and engaged sponsors.

It was refreshing to attend a conference where there was no pretension, and where the only expectations were of being surrounded by good people and being inspired by a genuine commitment to architecture. Interestingly, there were many attendees who were not architects or architecture students and who simply had an interest in architecture. And because everyone involved in the conference remained on the island for the three days, there was a genuine connection between all participants. The fact that some of the speakers also brought their young families to the event gave the occasion a very real sense of community.

Waking each morning to the murmur of activity in and around the bunkhouse accommodation reinforced this atmosphere. This, together with the clatter of plates at the dining hall, the chance meetings on the way to the bathrooms and the group discussions that could be overheard from one bunkhouse to the next, evoked memories of school camps.

The speakers presented well and the work was compelling. For a group with so much in common, it was testament to the curators of the event – Lindsay Johnston, Richard Leplastrier and Peter Stutchbury – and to the rigour, creativity and innovation of the architects selected that many of the projects resisted stylistic similarities.

Lene Tranberg (Lundgaard and Tranberg, Copenhagen) started the weekend of talks and spoke of an architecture of generosity that can invoke a memory of the place in which it sits. Brit Andresen explored what it is that expresses a national characteristic, and how materials can reflect a setting and a rich response to place, while former student of Lindsay Johnston, Christine Major (Welsh and Major, Sydney) spoke of the idea of the point of departure, and how this idea can act as a scaffold for the architecture. Antoine Perrau (AP Architectures, Saint-Denis) from Réunion Island exhibited solutions that are absolutely responsive to setting, inclusive of climatic focus. Gabriel Poole’s talk, which concluded Saturday’s presentations, was the first he had given for some 12 years. He spoke both humbly and passionately about his life’s work, and of the constant and continuing exploration of ideas, invention and innovation. It brought some to tears and all to a standing ovation.

At one point on Saturday afternoon, there were six Australian Institute of Architects Gold Medallists and 2016 Droga Architect in Residence Juhani Pallasmaa in the room. Some said the six also made it into the island swimming pool (not that us Queenslanders ventured in, despite the 31 degree heat). A Blues band provided the entertainment for Saturday night, but it was Lindsay Johnston’s late-night version of “Deep and Wide” that stole the show, reinforcing his passion for the spirit of this event.

Sunday morning started with Ingerid Helsing Almaas, editor of Norwegian magazine Arkitektur N, who questioned the architecture of engagement rather than the current preoccupation with that of the frame. She explored the merits of seeking the essence of the experience of the natural setting through architecture.

Richard Leplastrier and Peter Stutchbury jointly finished proceedings with a rough vertical slice through Asia and the Pacific, revisiting learnings from other cultures and exhibiting how some of this knowledge can be translated today. This way of seeing the value and learnings (sometimes lost) of other cultures, as well as our own, both re-presented and reimagined in projects, seemed a perfect way to wrap up the conference.

The Deerubbin event is an example of complete design thinking. There can be no better way to emphasize the core values of the conference than to have the speakers, organizers and participants inhabit a small island, equitably dispersed in humble shared accommodation, relying on a mutual respect and a sense of responsibility to each other and our surrounds. This is not so much a conference with a theme as it is an experience of values and ideas in action.

There can be no better way to emphasize the core values of this conference than to have the speakers, organizers and participants inhabit a small island, equitably dispersed in humble shared accommodation, relying on a mutual respect and a sense of responsibility to each other and our surrounds.

The idea of the Deerubbin conference – first held in 2014 – was born out of the biannual Røros Conference in Norway, attended in 2013 by Peter Stutchbury and Lindsay Johnston at the invitation of Ingerid Helsing Almaas. There, all the speakers and delegates shared a conference without the hierarchy of VIP-only dinners and separate events for the speakers. Deerubbin also recalls the Alvar Aalto Symposium, a triannual forum of contemporary architecture for which Aalto devotees converge on the small town of Jyväskylä, Finland – a setting rich in Aalto’s buildings and the Alvar Aalto Museum. But Deerubbin, with its limited number of attendees and its residential format, is immeasurably better. For each of us, memories of the scent of burnt orange blossoms, the sound of hastening cicadas and the ambitions of making good architecture and good friends lingered long after the close of Deerubbin 2016.

Deerubbin 18 is scheduled to take place, again on Milson Island on the Hawkesbury River north of Sydney, from 16–18 March 2018. 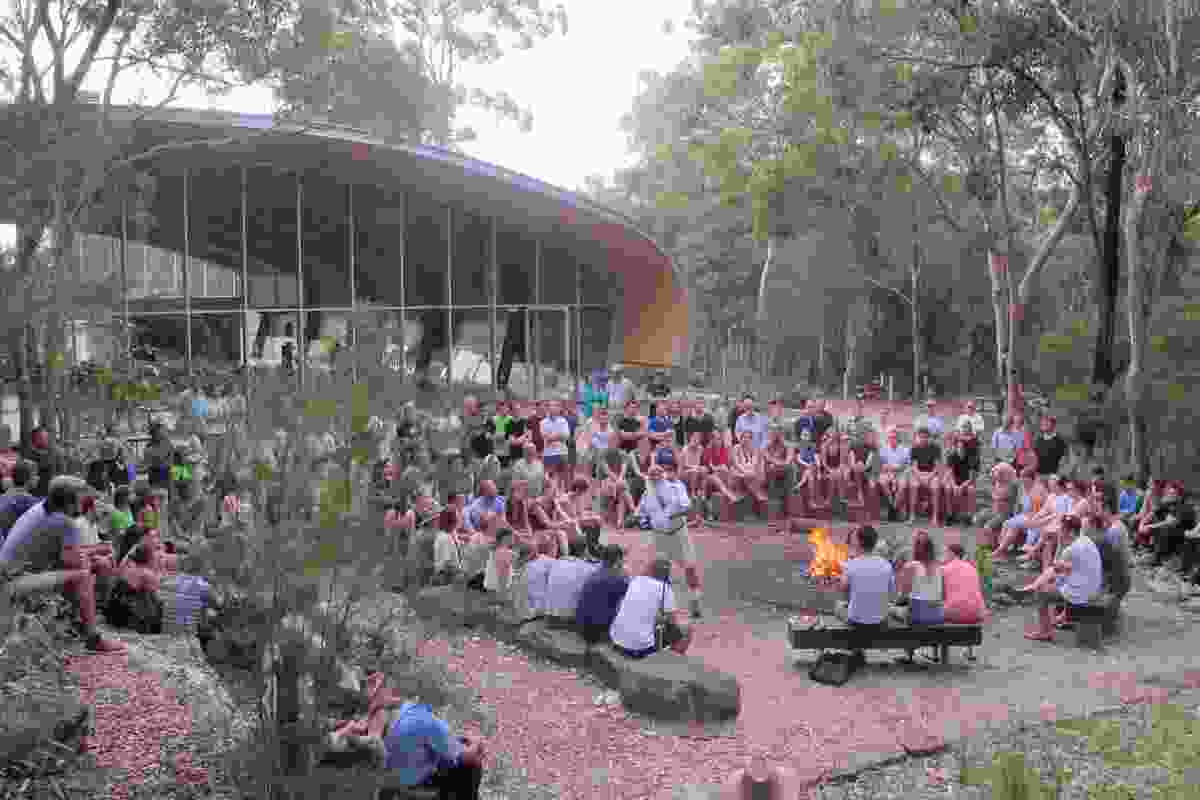 Uncle Max Dulumunmun Harrison gives the welcome to country at Deerubbin 2016, in front of the Milson Island Sport and Recreation Centre by Allen Jack + Cottier. 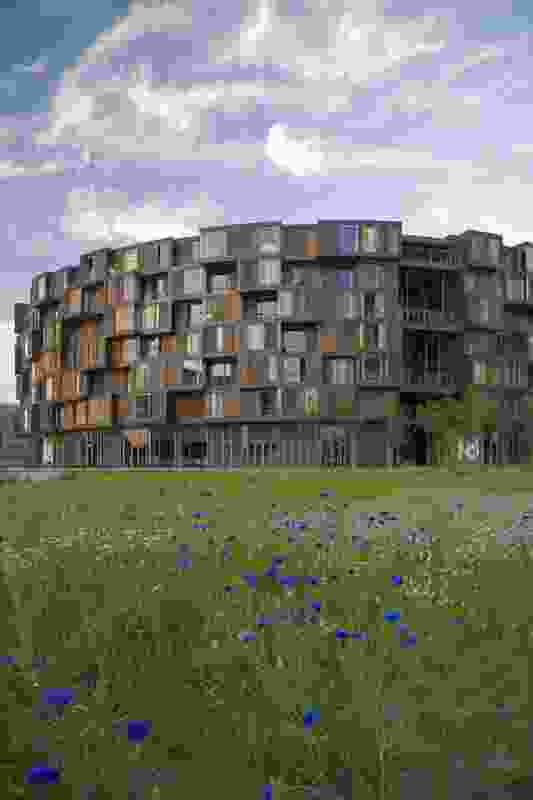 Tietgen Dormitory in Copenhagen, Denmark by Lundgaard and Tranberg (2005). 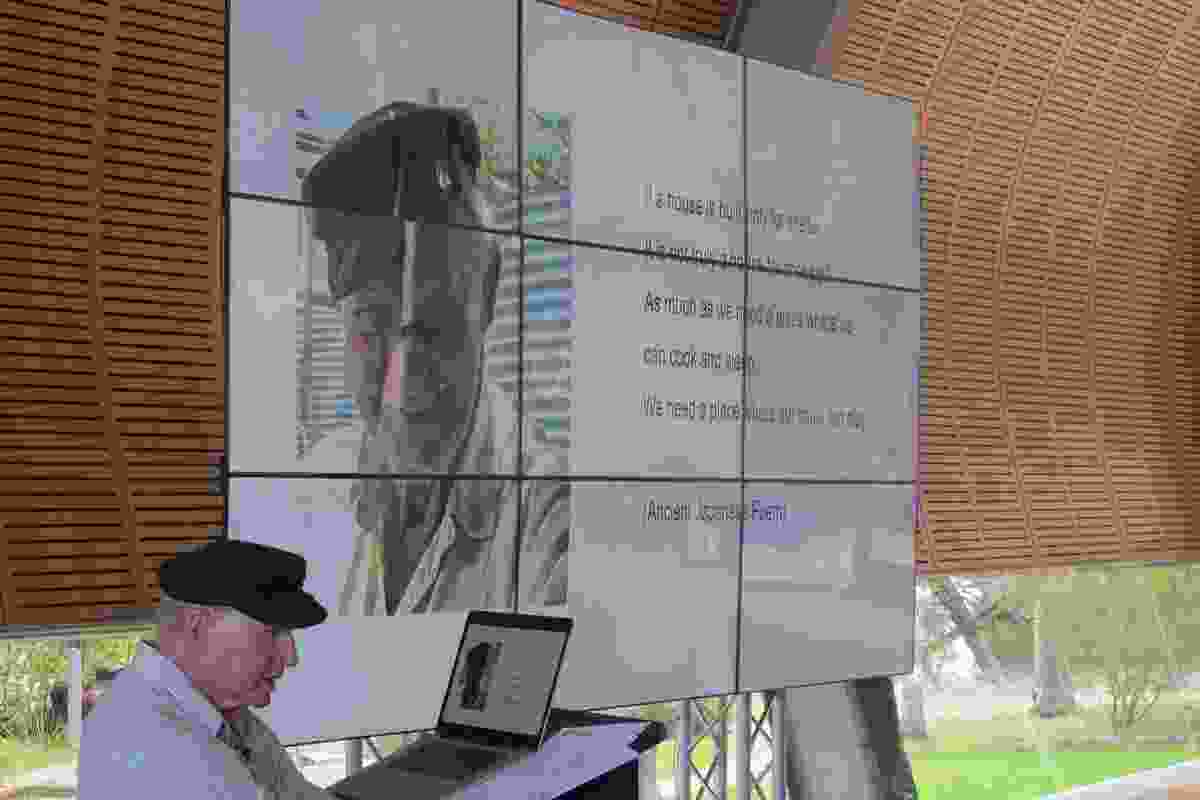 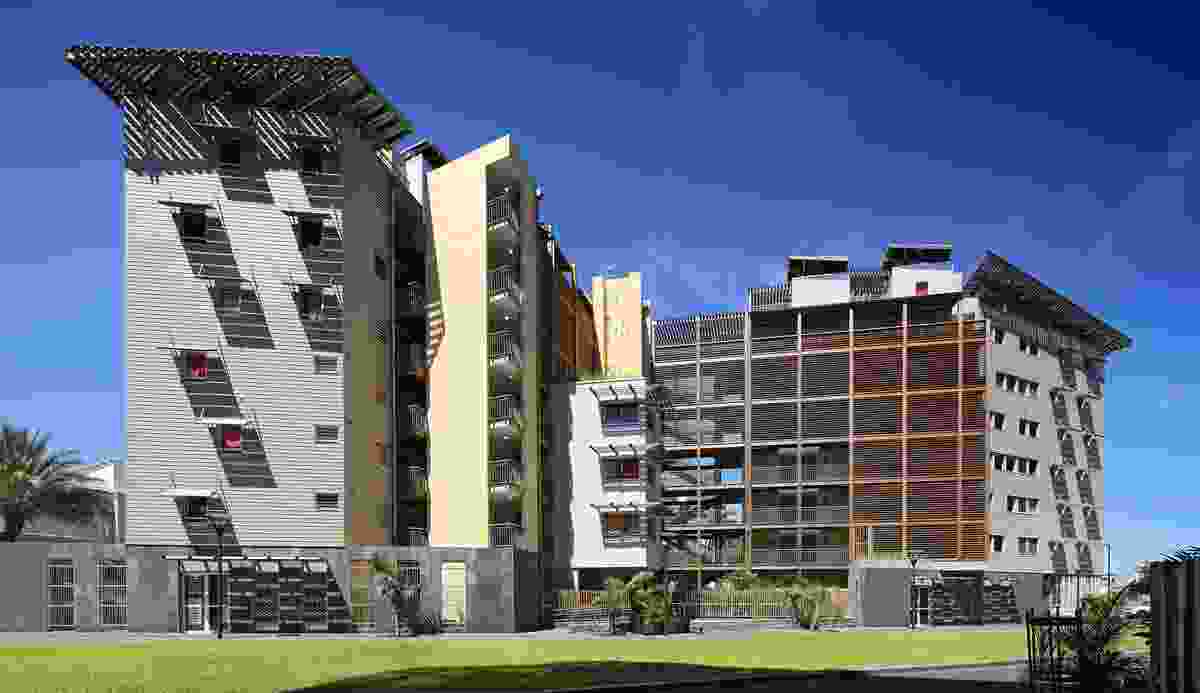 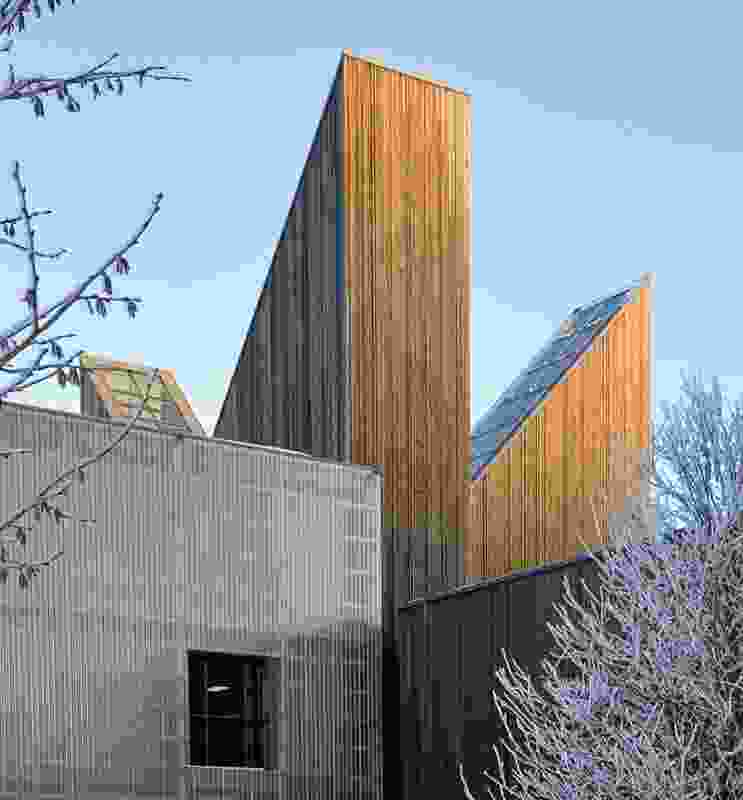 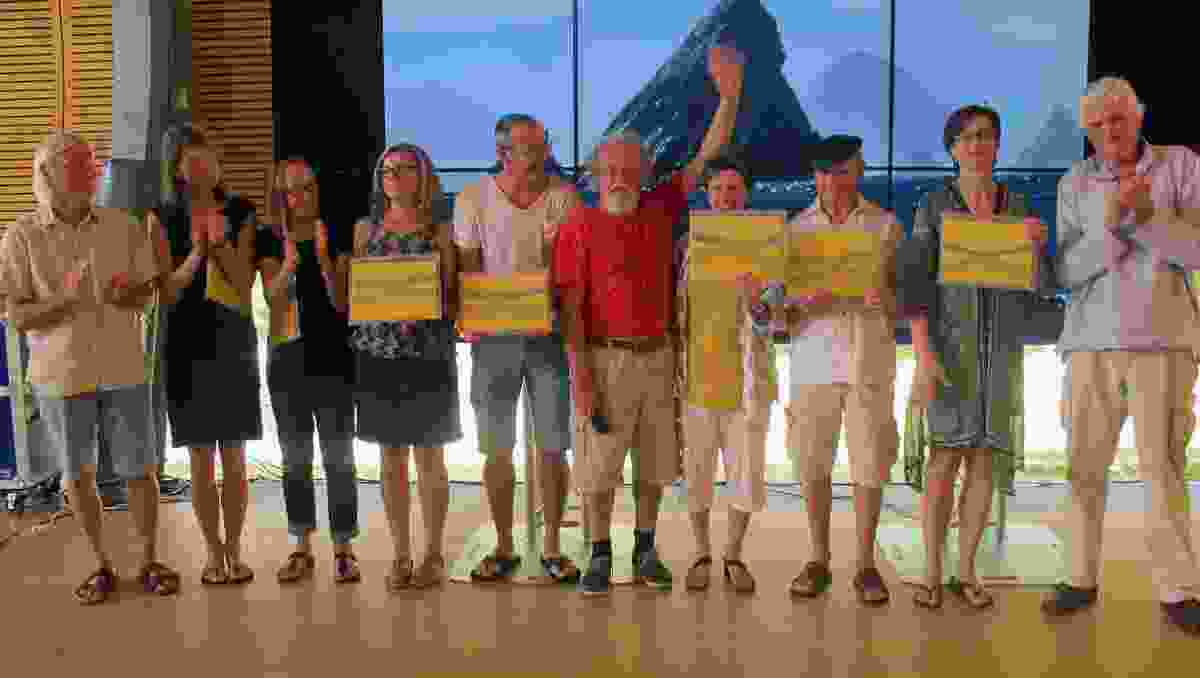