Donation to University of Sydney to shake up architectural education

The Arch-Museum, a project by University of Sydney graduate student Gracie Guan.

Image: courtesy the University of Sydney

The University of Sydney’s School of Architecture, Design and Planning is hoping to use a “significant” endowment to shake up architectural education by bringing high-profile, practicing, national and international architects into the architecture studio.

The endowment, which is of “significant” but unspecified size, comes from architect Sustan Rothwell and property developer Garry Rothwell.

“This is really a pretty big kind of thing,” said John Redmond, dean of the School of Architecture, Design and Planning. “This is not just a normal chair, it’s a whole program that they’re funding.”

Redmond said that the Rothwells approached the university with a number of concerns about recent trends in Australian architecture. Among these was a frustration that a string of recent, prominent architecture competitions held across Australia had resulted mostly in winners from large international firms.

“In the past, young architectural practices often went in for these competitions and that was how they got started,” said Redmond. “They’d win and they’d build their practice from there.”

“What we’ve seen instead [since then] is the big national, and often international practices winning them.”

While Redmond acknowledges that this trend is partially the result of a variety of structural and economic factors, the Rothwells also questioned whether architectural education in Australia puts architects-in-training in a good place to have a proper go at significant design competitions.

“They also felt that maybe studio education in universities wasn’t empowering these students enough in design. It wasn’t giving them […] the level of innovation that would allow them to be winners.”

While the details are still being hammered out, the plan is to use the endowment to establish a number of fractional positions that would be filled by a major international architect, a major national architect, and a third person who would coordinate and plan the program as a whole. The endowment would also be used to fund and provide stipends to a number of students in the University of Sydney’s new design PhD program, who would be mentored by these practicing architects.

“We’re talking to some really major figures about being involved in this program,” said Redmond, “The idea is not to kind of make these people part of the academy – the people we’re choosing as chairs are people at the cutting edge of architecture.”

Redmond hopes that the program might help to reconnect the academic architectural research done in universities with the work done in professional practice, something he observes as having suffered in the past few decades.

“The fundamental issue is that architecture suffered in the modern research university,” he said. “If you looked around at professional programs about 40 to 50 years ago – ones like architecture, law and business – you’d find that most of the staff members were basically practitioners that might have spent half of their time in the industry and half of their time in the university.

“There’d be a few scholarly people writing books, but by-and-large most of the people teaching would be these people who would come into the academy but were really professional practitioners.”

Redmond believes that while other fields have developed a successful “back and forth” between academia and professional practice in the decades since, this hasn’t happened in architecture.

“For reasons that are complex, but are partly due to a failure of the whole field to re-conceptualize professional and research practice, [architectural researchers] went to all the areas that were academically respectable – architectural history, social science and technology, for example.

He added that while research is conducted by practices, “it’s always kept as confidential IP. There’s no public critique of it, there’s no university critique of it, and there’s no discussion of it so that you get a whole body of knowledge building up as you do, for instance, in medicine.”

Redmond said that his eventual hope is that the program, if successful, might result in Australian architecture schools making more space for architecture researchers with one foot still in the field.

Donation to University of Sydney to shake up architectural education 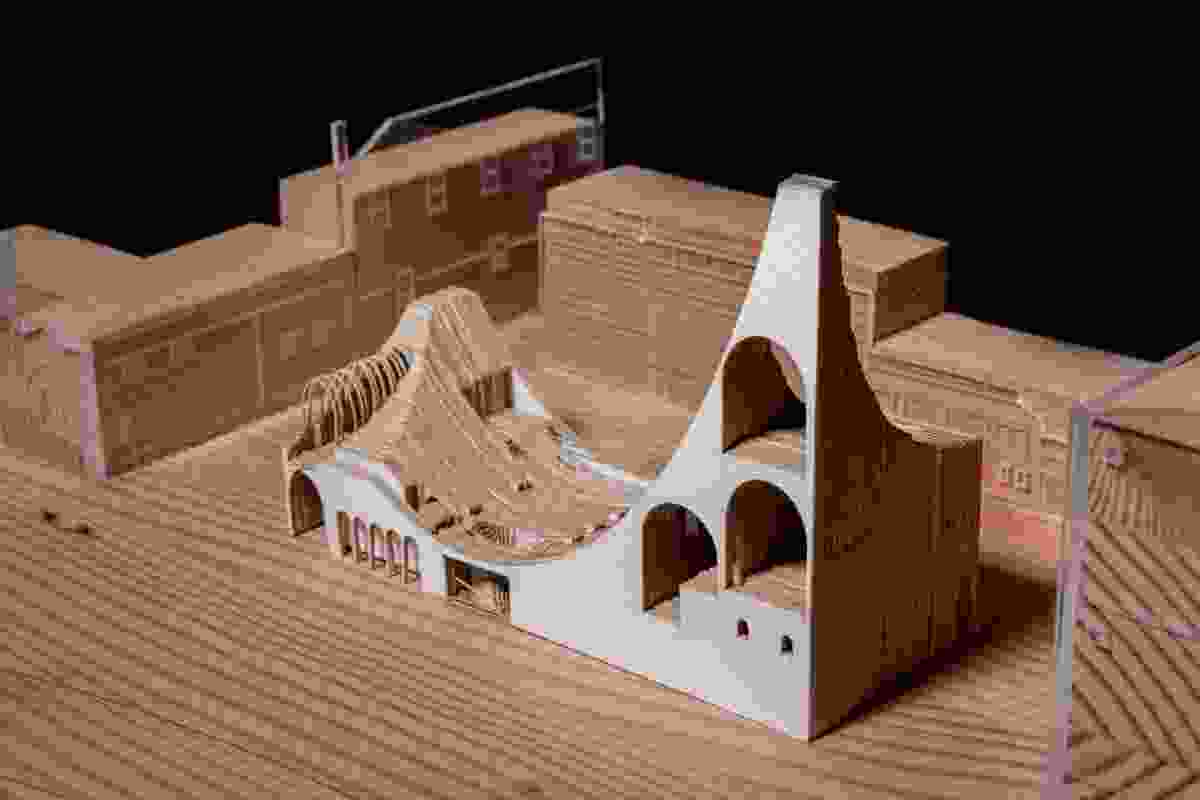 The Arch-Museum, a project by University of Sydney graduate student Gracie Guan.

Image: courtesy the University of Sydney