What was once a narrow, dark terrace house in Sydney’s Double Bay has been transformed into a home characterized by the interplay of volumes, planes and light. The main focus for architects Tobias Partners in transforming the four-metre-wide property into a family home for its client was to introduce much-needed natural light into the centre of the site with an elegant architectural insertion.

Heritage constraints meant the late-nineteenth-century facade had to be retained in its original form and that there could not be any newly built elements visible from the street. The house previously comprised two ground-level bedrooms, with the living space and kitchen in a lean-to structure at the rear and an additional upstairs bedroom and bathroom, all subsequently gutted beyond the facade and front bedroom.

Once inside the new, streamlined white entry hallway, the eye is immediately drawn past the front rooms (also accommodating a bathroom and separate galley-style laundry) through the soaring, light-filled central section of the home, which features a gravity-defying timber and steel staircase. “Keeping the sight lines through the length of the site, we essentially pulled the house apart to create separate volumes,” says project director Matthew Krusin. These volumes are linked by a bridge overlooking the central living area of the house.

The central double-height living space accommodates the kitchen, dining and stair circulation zone at ground level, and is flanked by a lineal perimeter courtyard garden (featuring wild banana plants) on the southern side, with glazed walls bringing light deep into the plan. In conjunction with high-level motorized clerestory windows from the new north-facing roof, it also provides effective cross-ventilation, which is often a challenge on narrow, built-up sites. In the warmer months, with the sliding doors open, the air flow is significantly enhanced throughout the house.

As with the architecture, simplicity defines both the lineal kitchen layout and the design of the flush cabinetry. Penetrating into the heart of the living zone is a sculptural island bench clad in ochre-toned Morato Etrusco marble that hides a bank of American oak-clad drawers. A wall of white polyurethane cabinetry conceals an additional preparation zone and integrated appliances.

Beyond the open-plan living area there is a separate, more intimate, family room that flows out into the rear courtyard and barbecue area through expansive, white timber-framed sliding glass doors. A marble-topped entertainment credenza, which extends outdoors along the southern edge of the courtyard to become an outdoor kitchen, and two wide floating concrete steps that double as informal seating, connect down to the garden. Dwarf cardamom ginger, magnolias and mondo grass, whose deep green hues can be glimpsed from many areas in the house, are located along the northern edge of the courtyard.

The screen of suspended white steel rods supporting the stair treads (and forming an integrated balustrade) creates a dramatic backdrop to the living area. On the upper level there is a spacious main bedroom, bathroom and balcony at the rear, and an additional two bedrooms and a bathroom at the front. Close attention to design detail has enabled concealed storage or services to be cleverly integrated at every opportunity, while all the doors either pivot or slide open and disappear into the wall cavities.

The compact, ground-level front bedroom/study, whose existing proportions have been retained as per council regulations, was enhanced with a new wall of elegant white built-in storage and a built-in desk. With its direct access to the adjacent powder room it can also function as a guest suite.

Limiting the palette to three key materials enhanced the connection between different levels and from indoors to out. While the interior is predominantly white, it avoids feeling flat and cold through the use of warm timber and dark marble accents. There is oiled European oak timber flooring throughout both levels and in the stair treads, while American oak joinery is used for the bathrooms, with a darker veneer used for the main bedroom joinery and ensuite. Rich, dark marble appears on the kitchen and bathroom benchtops, as well as in the built-in credenza in the family room and the outdoor kitchen bench. There are also oatmeal-toned linen-upholstered wall elements in the bedrooms and in the built-in family room banquette.

The external front elevation was already in good condition; it is simply painted in a deep ochre tone complemented by crisp white, highlighting the deep window reveals. In contrast, the rear elevation has a highly contemporary expression, with symmetrical glazed panels on the upper and lower levels, elegantly framed in white timber with vertical spotted gum timber privacy screens and horizontal sun control panels.

Sustainability was well considered throughout the design: the architects were highly conscious of the need to allow for cross-ventilation and passive cooling in the house. The floors are heated for the colder months. North-facing clerestory windows and the internal courtyard also ensure optimum levels of natural light throughout. Rainwater is collected from the roof and used to irrigate the garden, with the tank concealed beneath the outdoor kitchen bench.

Despite its narrow proportions, the home achieves a highly successful blend of open space, comfort and practicality. Above all, circulation, connection and views all become key elements in the design as light is effectively suffused from one level to another. 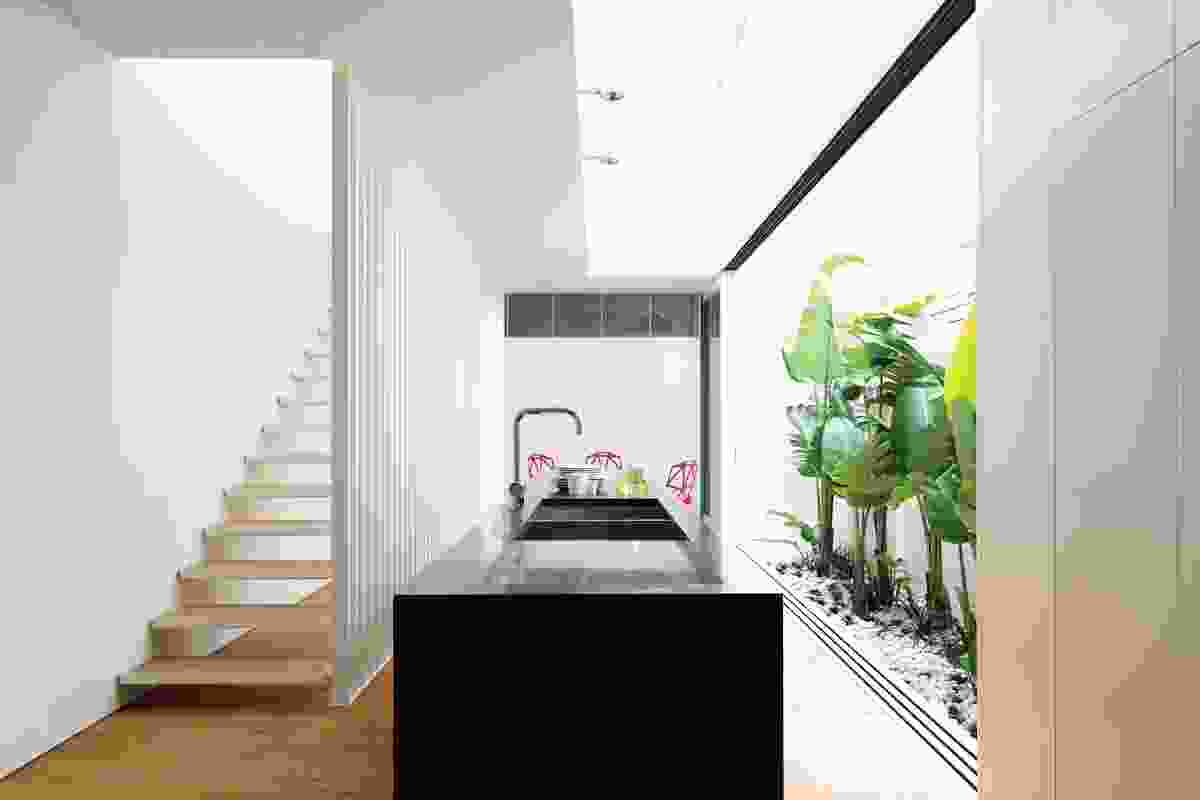 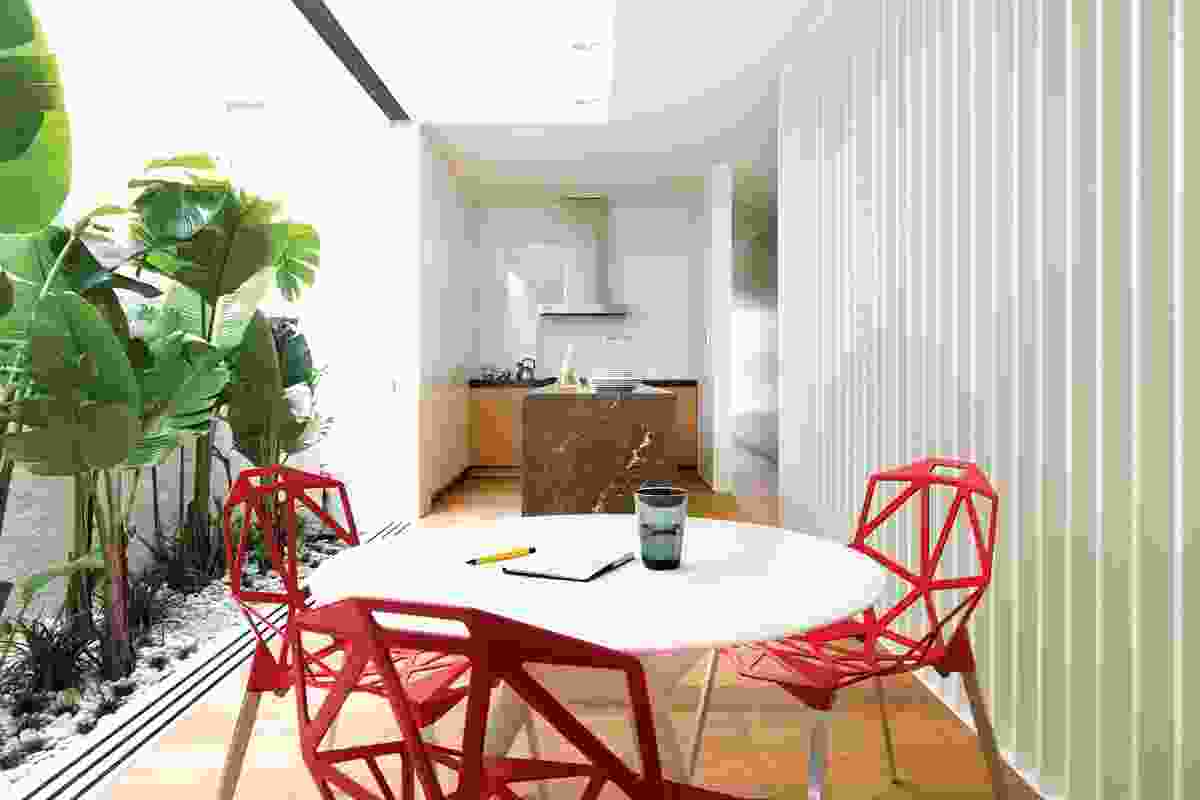 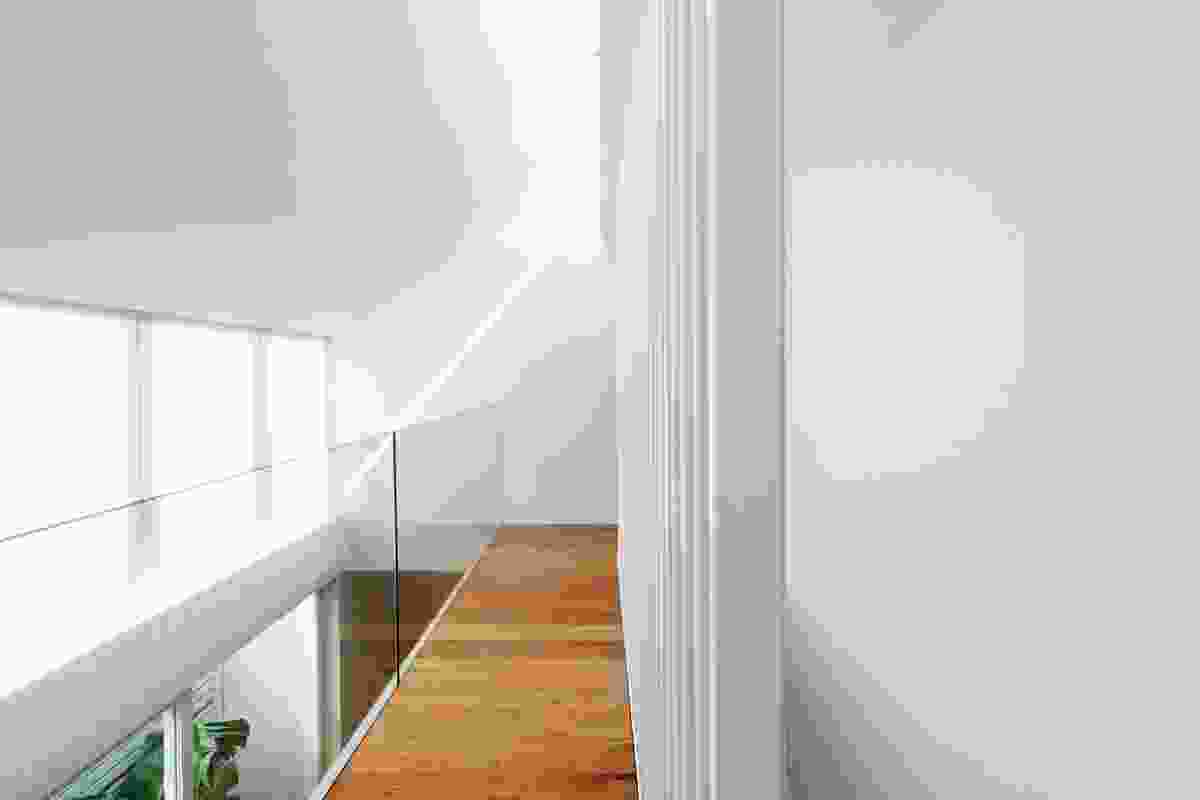 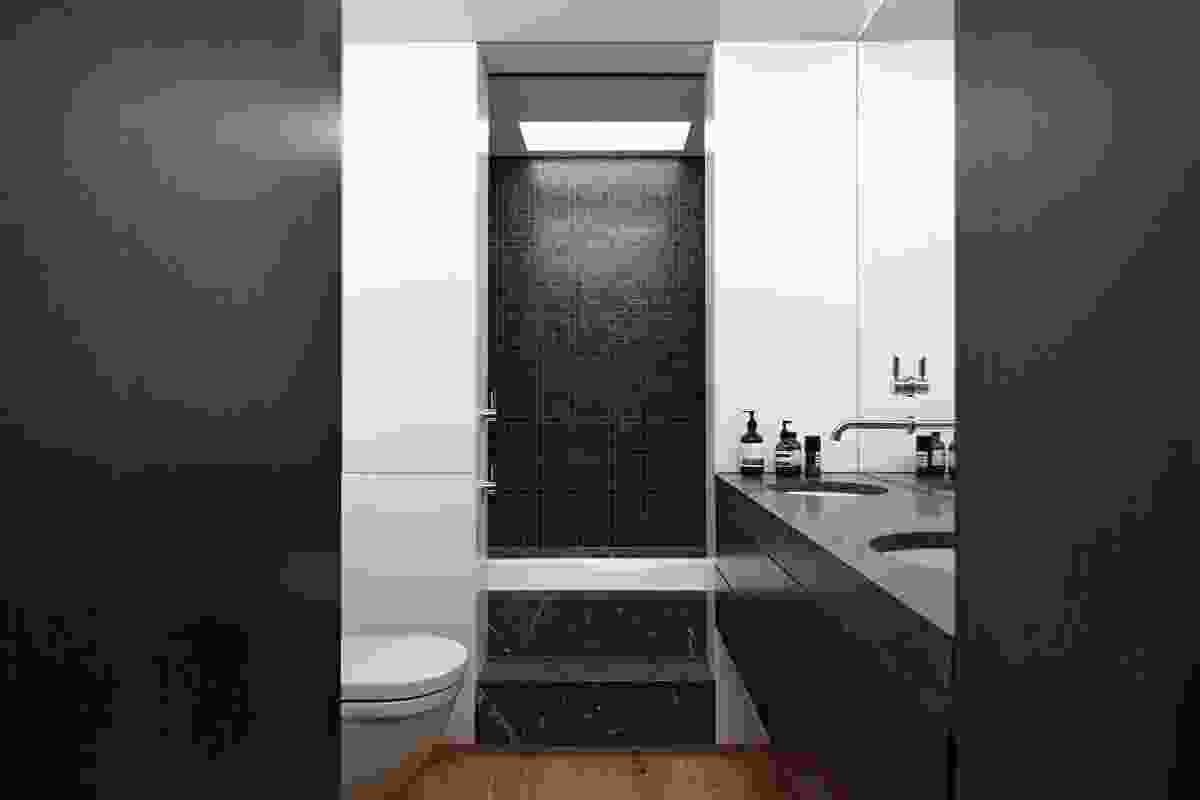 Rich, dark marble is used for the bathroom and kitchen benches. 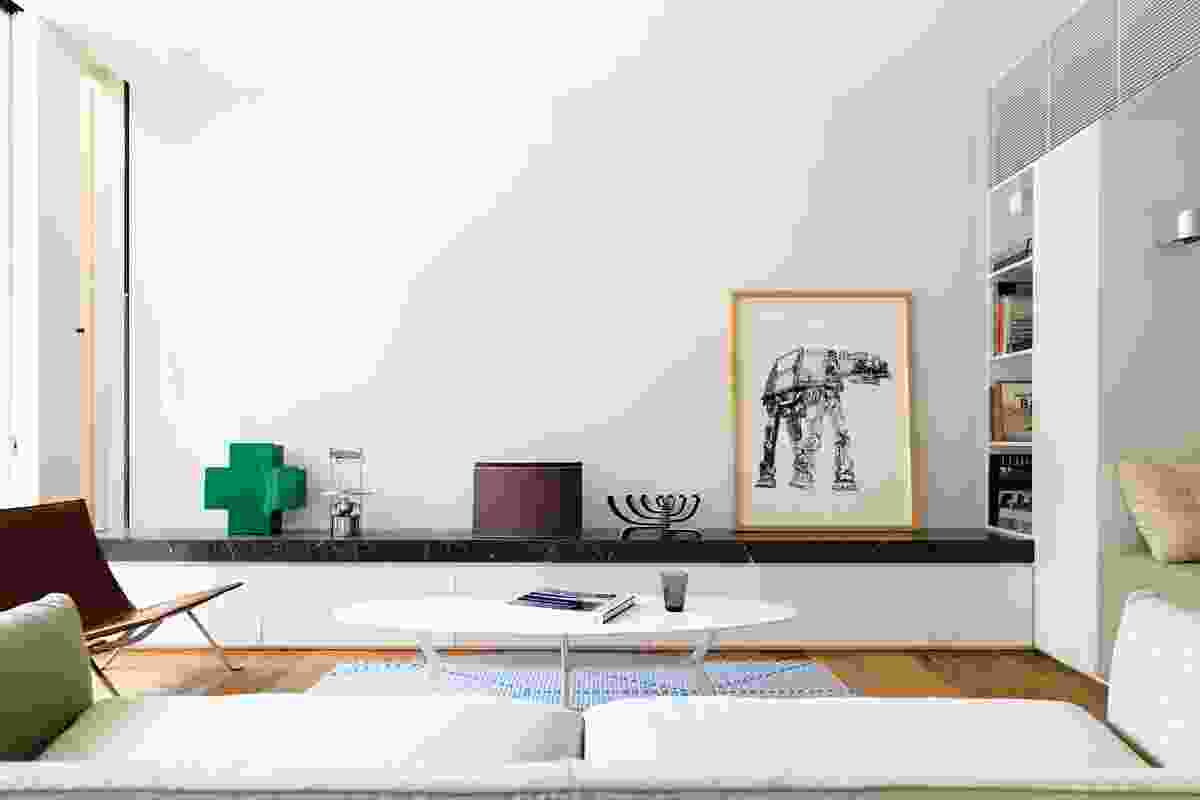 A marble-topped credenza extends into the courtyard. 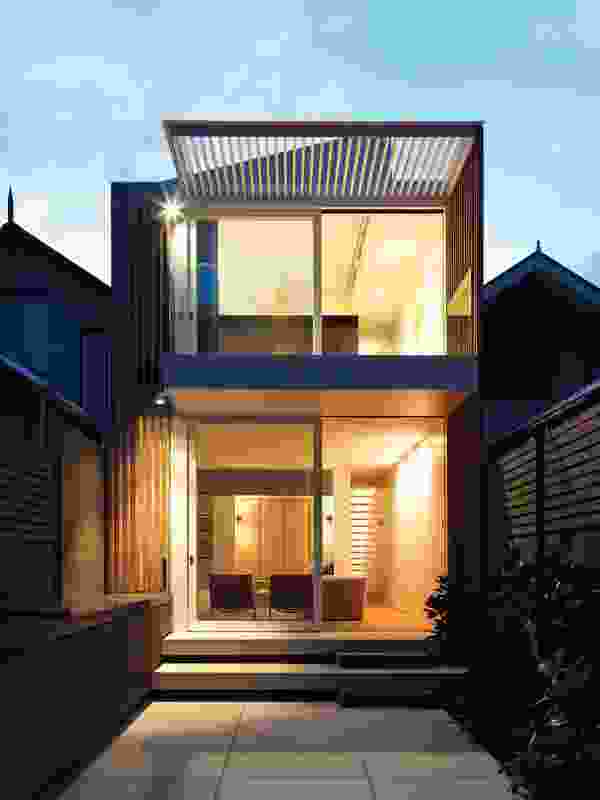 A family room flows out into the rear courtyard.