A recent installation by artist Lara Tumak, Imaginary Architecture, asked, “is it possible to create architecture out of nothing more than dreams?” As Naomi Stead discovers, the installation offered profound observations about urbanity and architecture’s place in popular imagination.

It’s always fascinated me, the place that architecture holds in the public imagination. I don’t mean that regular people frequently get carried away about buildings, which they generally don’t. I’m talking about the heady, even intoxicating way that architecture as a practice, and architects as practitioners, appear in popular media: on TV, in movies, in books, in toys and games, and increasingly also in art galleries.

As a result, if I had a dollar for every stranger who has confided in me (often quite shyly, perhaps a little disappointedly) that they always wanted to be an architect, I would at this moment be retired and lying on a beach.

The construction is almost entirely fantastical. Ask any architect about their actual working life and they will tell another story altogether – albeit one with its own satisfactions and fulfilments.

…architects are on the one hand charged with keeping alive all our most treasured dreams about inspiring places and ways of living, and on the other condemned as out-of-touch prima donna aesthetes who make (ugly) art with other people’s money…

But the fact that these ideas are fanciful doesn’t diminish their power; and to try and debunk them would anyway be missing the point: they are whimsies, wishful thoughts, romantic reveries. People really seem to want architecture to be this otherworldly, world-making activity. Or maybe they want to believe we live in a world where such wondrous transformations and constructions are possible. Whatever the reason, architects get an awful lot of good press.

(Actually they also get a fair bit of bad press: it’s an eternal irony that architects are on the one hand charged with keeping alive all our most treasured dreams about inspiring places and ways of living, and on the other condemned as out-of-touch prima donna aesthetes who make (ugly) art with other people’s money).

I’ve written about all of these issues before (forgive the shameless self promotion): about how such ideas manifest in childrens’ books and about how the popular conception of architecture seems to link it inexorably with play – framing architectural design as the exercise of childlike creativity; architectural drawings and scale models as dramatic props; architectural instruments as toys; and the work of architects as really a frolic: hardly work at all.

Then, a few weeks back, I saw yet another example of the phenomenon – and it got me thinking again.

Imaginary architecture was an interactive, “all ages” installation at the Melbourne Arts Centre, which ran for several weeks in January. Conceived by artist Lara Tumak, the exhibition was commissioned by the Arts Centre, following an earlier incarnation developed with ArtPlay – the City of Melbourne’s dedicated children’s cultural centre and program of art workshops.

The installation posed the question, “is it possible to create architecture out of nothing more than dreams?”

Of course in the real world the answer is, emphatically, no. But in the realm of art, and furthermore the realm of fiction and play, of fantastical exploration and imagined occupation, then anything is possible, and architecture becomes an incredibly rich field of conjecture and concoction.

The Imaginary Architecture installation was mounted in the dim downstairs of the Arts Centre, in a space that is as much theatre as foyer, and from the outside it looked like a pile of cardboard boxes. At intervals, mysterious sounds would emerge from within, and coloured lights would flicker and flash.

A perimeter of large appliance boxes piled up to form a loose enclosing wall, which you entered through a cardboard arch, at the scale of a child, forcing adults to bow their heads. Within, smaller boxes were stepped and stacked all over.

Each of these little boxes had been contributed by a visitor who, having been encouraged to bring a biscuit or cereal or shoe box of their own, could make their own scene inside the box, using art supplies and materials provided. They could then choose to add it to the colony.

Attendees were each given a torch to shine through a specially made aperture in the top of each box, revealing the scene inside.

The dioramas were inventive, and evidently mostly by children. Some had set a whole house within the box/room, others created outdoor scenes – dinosaur habitats, playgrounds, cemeteries. I saw a pet adoption centre, and a room full of hanging clothes. There were of course many bedroom scenes, with little cardboard kids inside, doing their own things. The attendant told me that some of the most popular had been undersea worlds, and party scenerios.

My own little boy worked diligently to make a paper campsite inside a shoe box - a person sleeping in a tent, under a blanket, while outside a river flowed by. He specified that it was night time, and that there was a “golden night-fish” in the river. It was very serious business.

The city as collective space

The installation, unassuming as it was, offered some profound observations.

First was its proposition about urbanity: to me it seemed a new take on showing the human life of a city (as opposed to, say, its infrastructure or built form). It framed the city as a collection of fantastical rooms: as the stacked accumulation of many lives, a colony of people each in their own separate spaces, each engaged in their own pursuits.

Like the lit windows of apartment buildings at night, each box thus represented a life taking place: separate, distant, unknown and yet familiar. This seemed a strangely compassionate vision of cities, of the commonalities of humankind, even alongside its multitudinous, mysterious difference. The vision is humanist without being nostalgic: this is how so many of us now live, in cities, this is how we co-exist in urban space, piled neatly one upon another.

Perhaps one of the reasons that architecture and cities are so frequently appearing in art galleries these days, as an instrument of interaction and “immersive” engagement, is precisely because they represent such collective activity. Like a coral reef or an ant colony, a city is the result of thousands and millions of individual agents, coming together in cooperation.

The interior life, not the exterior form, of architecture

Another refreshing aspect of the installation was its focus on the inner life of architecture – on rooms, and what goes on inside buildings, rather than their external form. With cardboard boxes as literal building blocks, the show was not about “signature” design or buildings as novel sculptural objects.

Dream homes are not only made from dreams, they are homes for dreams: places where whimsical ideas can take refuge from an increasingly frightening, turbulent world.

In this sense it was the opposite of another very popular recent instance of architecture in the art gallery - Olafur Eliasson’s The cubic structural evolution project. That work, recently reprised as part of Queensland’s Gallery of Modern Art’s 10-year celebrations, involves visitors making and remaking a city of white Lego, constructing teetering towers and elaborate, lace-like forms.

I saw that same work at the City Gallery Wellington in their intriguing 2015 show Demented Architecture, and it was amazing to see adults and children alike sitting down, with such commitment and concentration, to build a city together.

But while Eliasson’s work is clearly engaging, and very well loved by public audiences, Tumak’s Imaginary Architecture is another proposition altogether. It is a show about interior space and scenography and human action – the kinds of (both possible and impossible) things that people might conceivably do in a room.

We might even say it was a show about interiority: the quality of insideness that interiors have, and the sense that buildings have a secret and perhaps completely unexpected life going on within, which can rarely be read from the façade.

In this way, the interior becomes a metaphor for imagination itself. The inner life of rooms reflects the inner life of people. Dream homes are not only made from dreams, they are homes for dreams: places where whimsical ideas can take refuge from an increasingly frightening, turbulent world.

Maybe this is why architecture still holds such a particular place in the popular consciousness: it seems to provide a shelter and occasion for the play of the imagination. 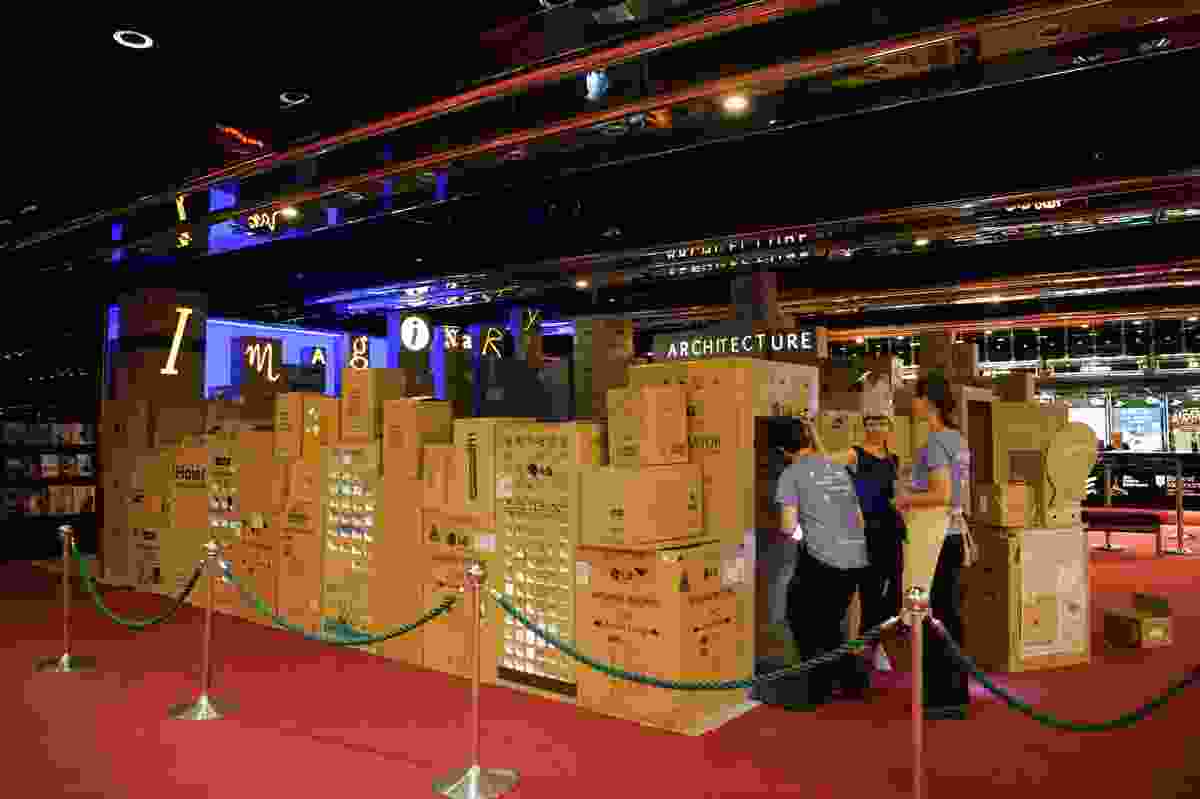 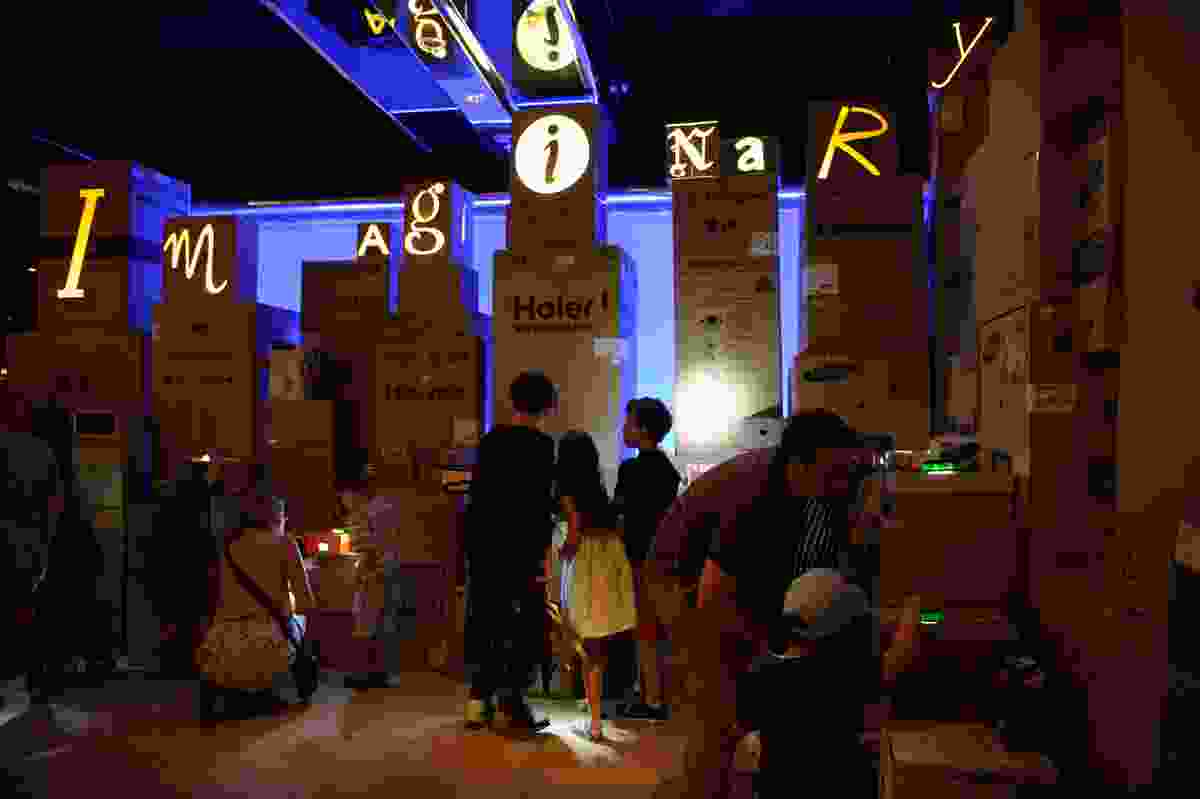 Imaginary Architecture by Lara Tumak is made with a perimeter wall of large appliance boxes. 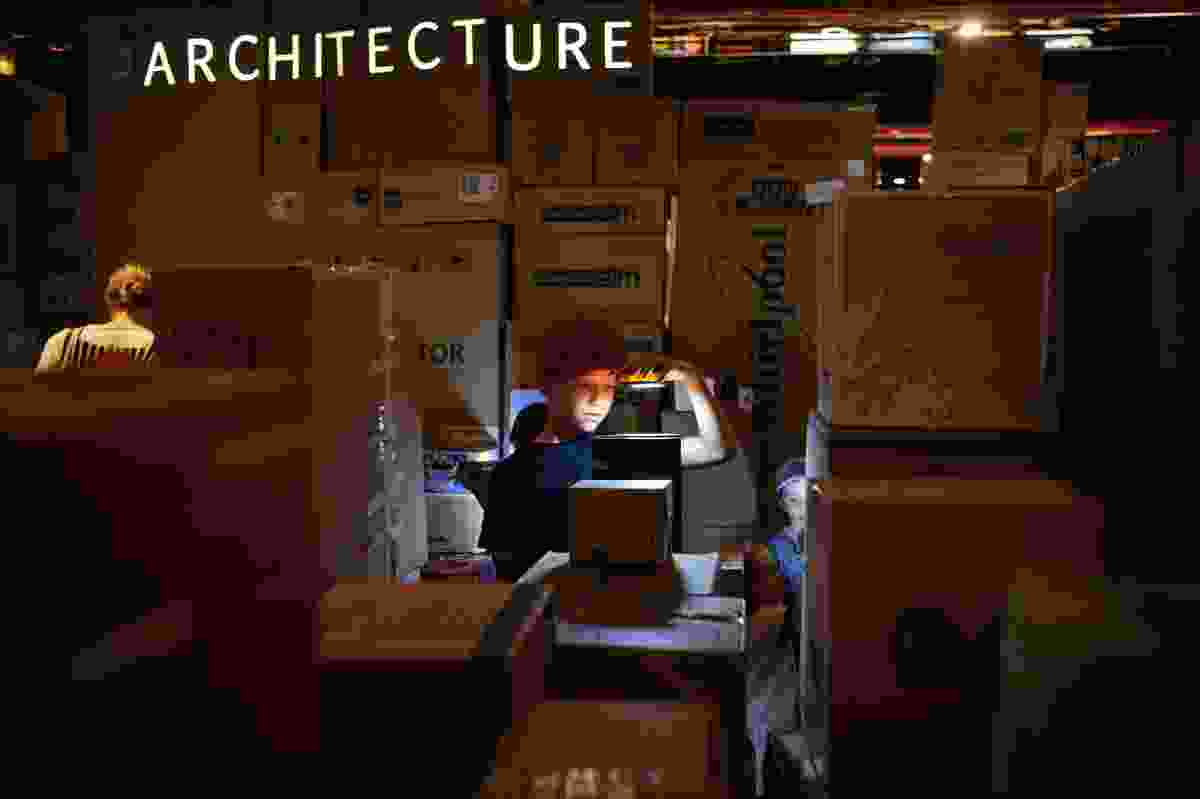 Participants were invited to make dioramas inside the boxes for the Imaginary Architecture installation by Lara Tumak. 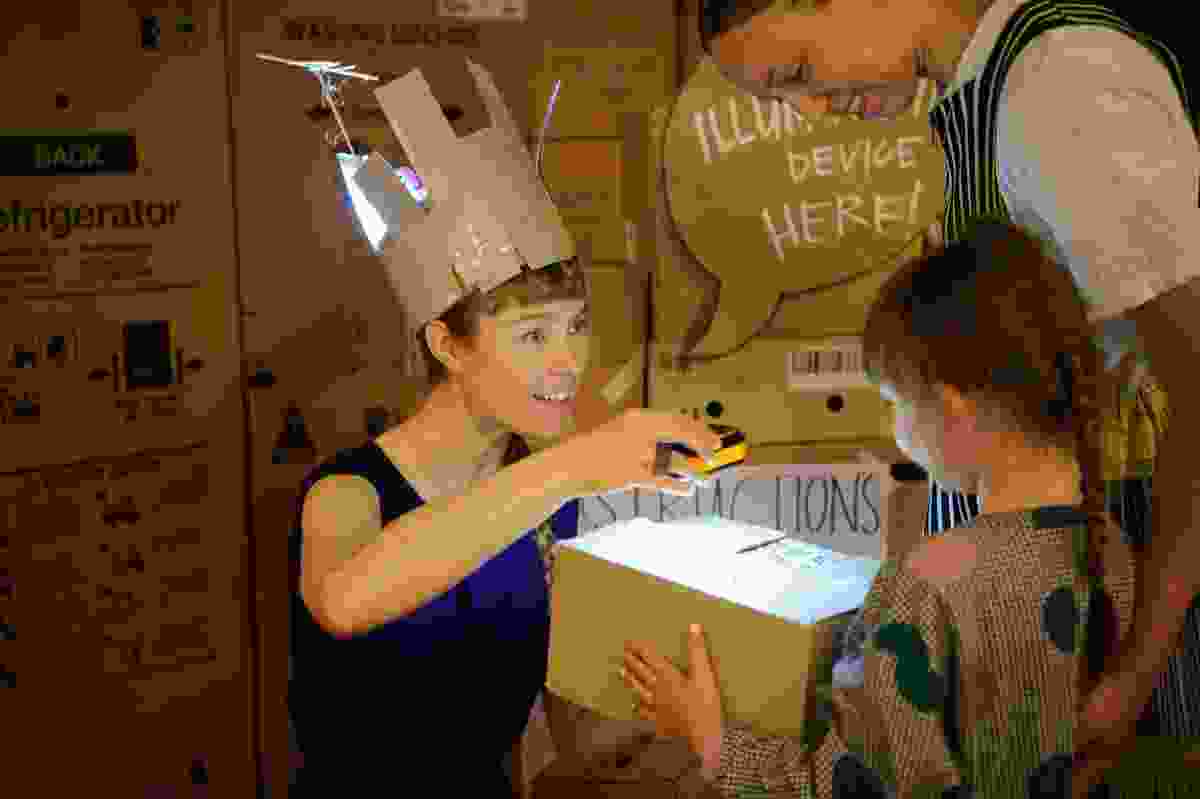 Each participant at the Imaginary Architecture by Lara Tumak was given a torch to shine through a specially made aperture in the top of each box, revealing the scene inside. 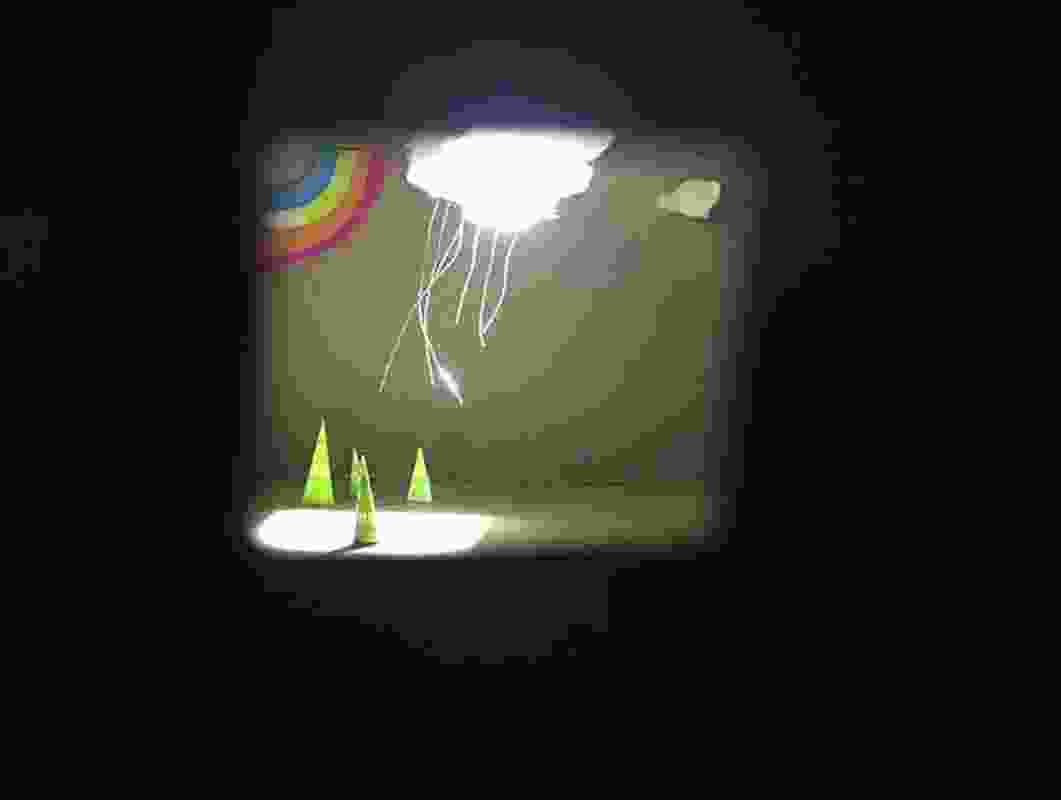 A scene inside a diorama in the Imaginary Architecture installation by Lara Tumak.