The apartment’s main living space bends with the arc of the crescent-shaped roof terrace.

When originally published in Houses back in 1998 (see issue 16), the Droga Apartment was presented with the headline “Zinc Slink.” There have been many articles written about this iconic project by Durbach Block Jaggers (then Durbach Block Architects), and most reviews have drawn on a range of analogies to capture its poetic expression: a sunning lizard, a slug, twisting bodies, a sleek cat, something with an uplifted head and scales, even a ship slicing through surf.

The Droga Apartment was awarded the Australian Institute of Architects Robin Boyd Award for Residential Architecture and the Wilkinson Award for Residential Architecture in 1998 (which marked the first time the practice received these accolades). Since then, Durbach Block Jaggers (DBJ) has established itself as one of Australia’s most important design-based architectural firms, led by Neil Durbach, Camilla Block and David Jaggers. They are in many respects “the architect’s architects.” Each of their new projects is highly anticipated and they are extremely influential on contemporary architectural directions in this country.

In part this is because their work is so idiosyncratic. While the practice is based in Sydney, the work does not fit into the Sydney School lineage and the architects have always pursued their own direction. Sydney architecture for the most part is fairly polite and humourless, but DBJ’s work has always contained wit and lyricism. For a while it seemed that they would mainly ply their trade in the up-market eastern suburbs domestic scene, but with the completion of the University of Technology, Sydney, Thomas Street Building (with BVN) in 2014, R7 at Barangaroo in 2016 and the Omnia apartments at Sydney’s Kings Cross (with interiors by SJB) in 2018, they have clearly established their bona fides well beyond the domestic scale, and that is very healthy for the local architectural culture.

Twenty-plus years later, it is interesting to revisit the Droga Apartment as a seminal DBJ project and the first under the Durbach Block banner. Within the project we can see many of the themes that have continued to evolve with the practice. DBJ manipulates space and form in a way that at first appears stylized but is instead a pragmatic response to project challenges, and this is well illustrated by the Droga Apartment.

The apartment sits atop a five-level nineteenth-century brick warehouse in the inner-city Sydney suburb of Surry Hills. Back in 1997, when the project was completed, this was still a gritty part of town. Since then it has undergone quite a transformation, with many of the warehouse buildings adapted into hip apartments and the street activated with some of Sydney’s best bars and eateries.

The project involved the renovation of the entire five-story warehouse, but it is the penthouse designed for Daniel and Lyndell Droga on top that has been noticed and published. It does not attempt to replicate the existing warehouse in any way; it is a foreign object – foreign in form, foreign in material – and appears to have been dropped into place. At the time, this seemed like a surprising thing to do, yet in the years since it has become a reassuring local landmark and part of the rooftop landscape in Surry Hills, although its awkwardness has not really diminished, which is also reassuring.

The apartment was an opportunistic proposition that arose because the planning rules indicated that a greater floor area could be realized on the site, and in Sydney you do not give away spare floor space. It was not enough to cover the entire roof, so the apartment footprint had to leave some of the roof vacant. Camilla explains that the apartment “inhales to create outdoor space,” which perfectly describes the crescent of outdoor area that was created.

It is not a big house; a single storey with a mezzanine above the kitchen that fits into the form as it lifts toward the north. In plan it is composed of three strips of space: the crescent-shaped outdoor area along the west; the big room, which is a generous bendy space for the kitchen, dining, living and mezzanine; and the flared remainder, which contains two bedrooms, service areas and circulation space.

The big room is double height, with the mezzanine adding an alternative living area that shares the same volume. Expansive views stretch across the city to the north, with horizontal slot windows framing specific vistas to the east and west.

The northern “head” of the zinc form makes a respectful counterpoint to the capping of the adjoining Edwards and Co building. Externally the Droga Apartment building is clad in the tough armature of the zinc skin, which gives way to a softer interior of white walls and timber floors. The main internal wall, along the east side of the living strip, hinges around a circular column and has a stage set-like feel, with deep cutouts and slots that give glimpses of the activities behind.

The apartment has had a few lives and the clients are a major part of the story. The Drogas lived and worked in the warehouse below and then in the apartment above until 2001, before renting the apartment to friends and artists for a while. They then gifted the use of the apartment to the Australian Institute of Architects Foundation at a peppercorn rent for five years, for the Droga Architect in Residence program. The program finished in 2018 and the apartment has now been sold.

As modern day cultural philanthropists (in 2018 they launched the Droga Indigenous Architecture Scholarship Program at the University of Technology, Sydney), the Drogas are of a rare breed and should be treasured.

The zinc-clad form is memorable and responds well to the opportunity to make its presence known, but it is the plan that is the most intriguing part. Taken purely as a line drawing, it is quite beautiful.

The great English architecture historian and critic Sir John Summerson, writing on Le Corbusier’s Pavillon Swisse in Paris (1931), stated: “We see a pattern which has a nervous, delicate beauty of its own … if we compare it with a Picasso drawing … we shall recognize similarities in the tensions of the curves and in those grotesque discords which, by playing a headlong game of never quite cancelling each other out, give the drawing – and the plan – an explosive, fascinating beauty” (in Heavenly Mansions and Other Essays on Architecture , 1949).

There are similarities in the way that DBJ bends and manipulates space and form, and this quote from Summerson could just as easily have been written about the Droga Apartment. While it can be dangerous to compare architects with artists, there are overlapping skills at work in the way that each resolves the geometries in a drawing or building plan. Like Le Corbusier, the work of Durbach Block Jaggers is (again Summerson) “full of a glorious, exciting contrariness – a contrariness which is never affectation because it invariably is a solution of a hard and fundamental problem of use.” 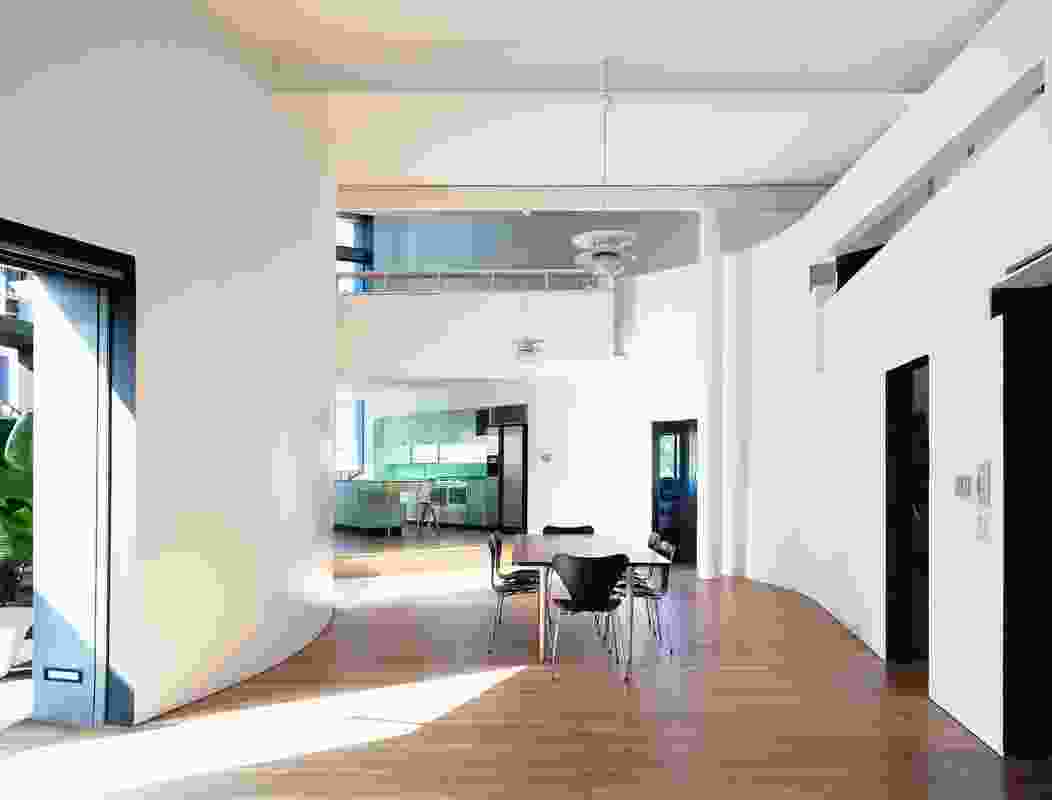 The apartment’s main living space bends with the arc of the crescent-shaped roof terrace. 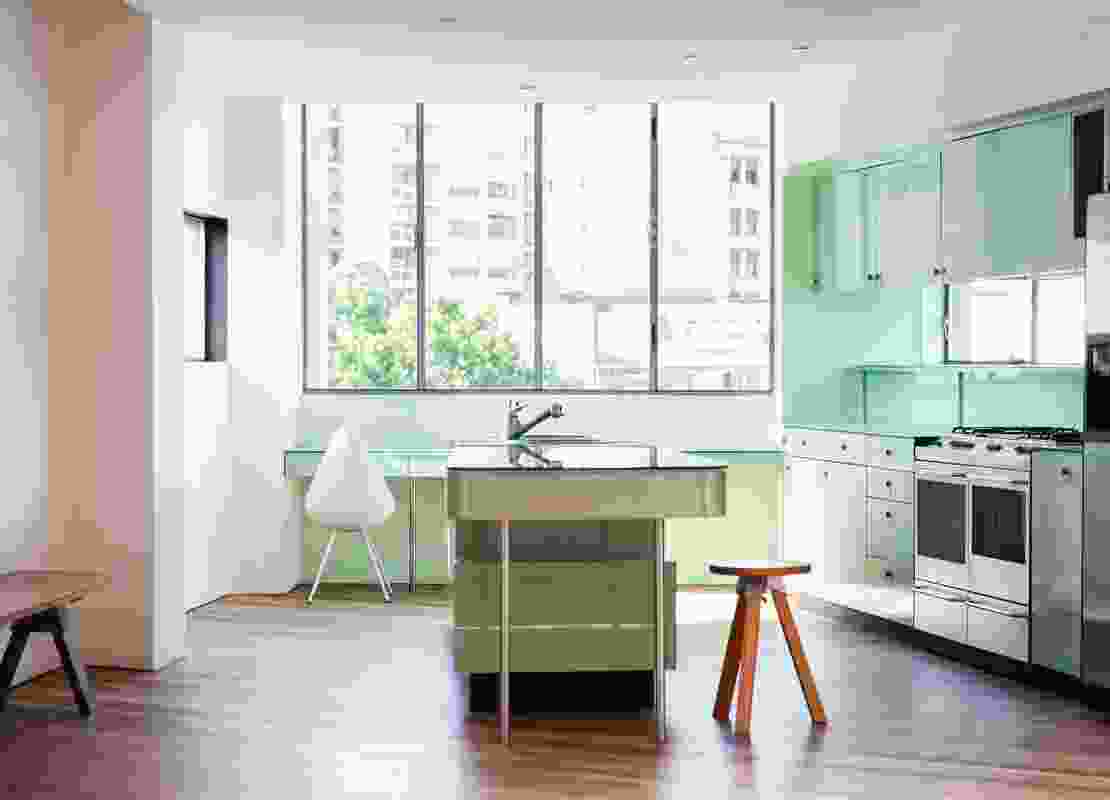 Positioned at one end of the generous living room, the kitchen’s windows capture leafy views. 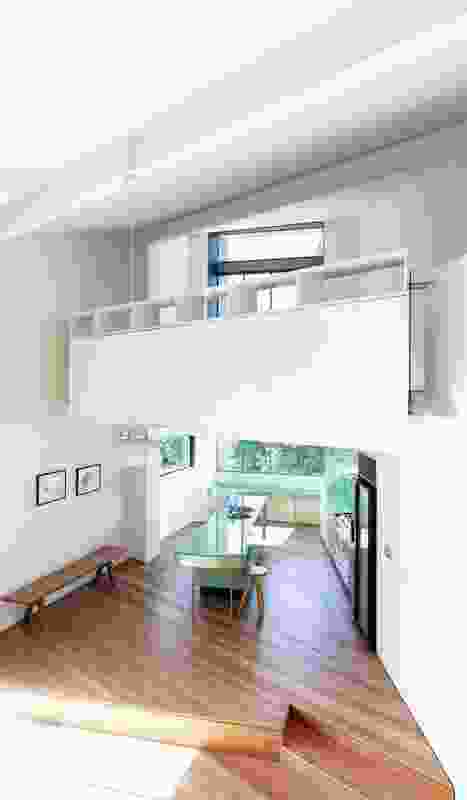 The double-height volume expands to accommodate a mezzanine level for additional bedroom or office space. 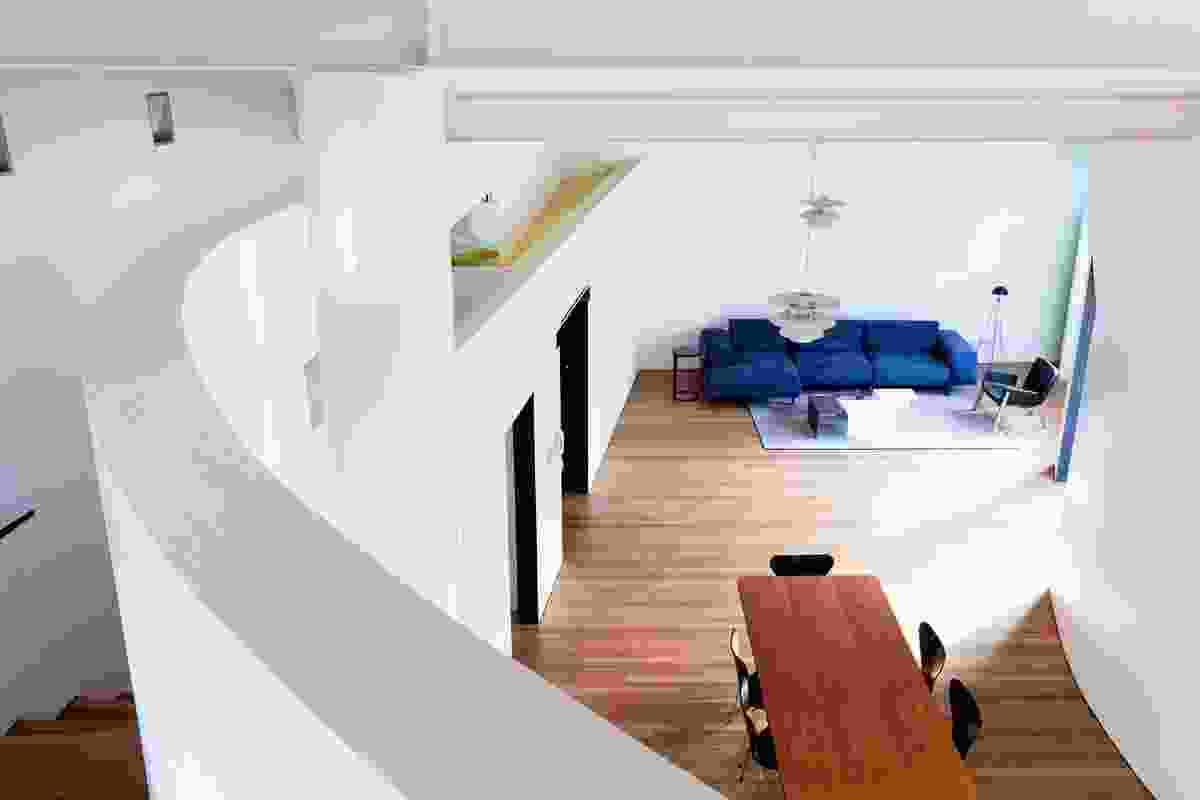 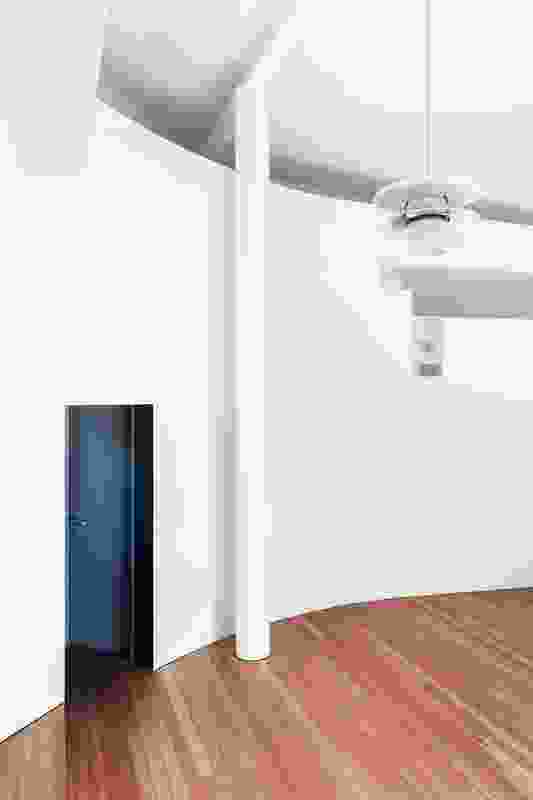 A soft interior of white walls and timber floors is protected by the apartment’s zinc “armour” cladding. 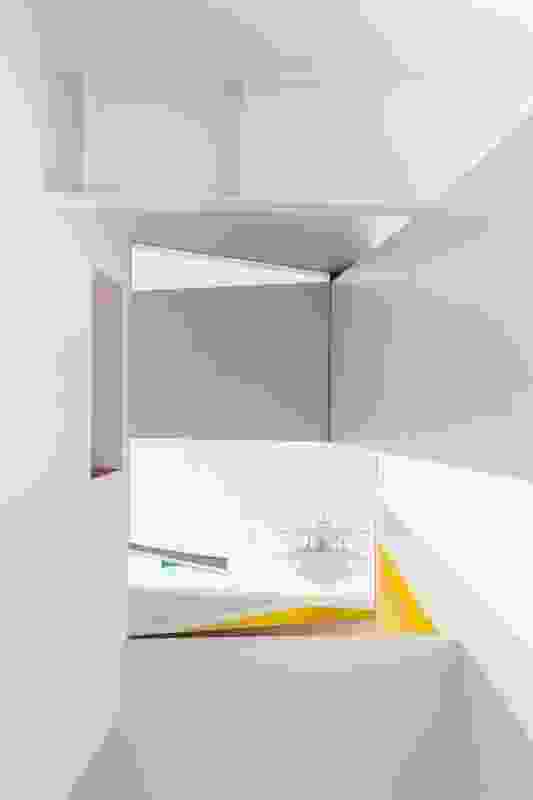 Space and form are manipulated by the architects in a manner that is at once functional and aesthetic. 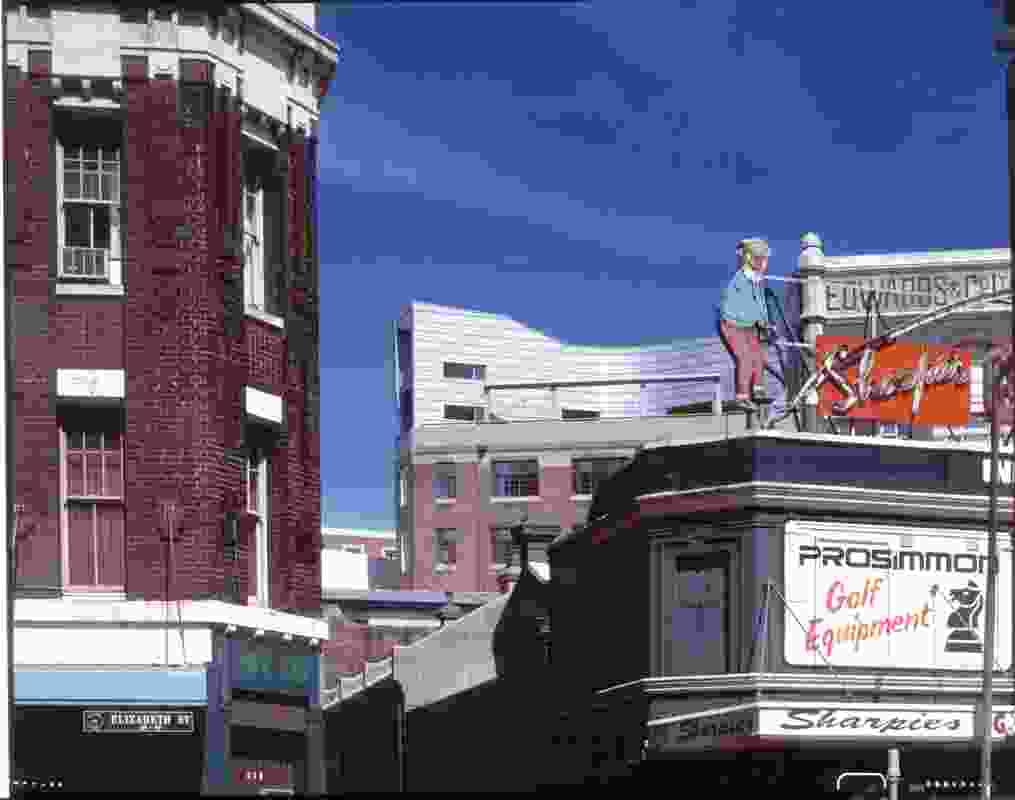