The owner’s love for this house, designed in 1959 in Brisbane’s Chapel Hill, has inspired an astute transformation by James Russell Architect that amplifies the inherent appeal of the mid-modern genre while adapting to the client’s changing needs.

Reinstating the original wraparound verandah re-exposed the living room as an operable corner.

Perched at the peak of its elevated site in the western Brisbane suburb of Chapel Hill, this ample and elegant house was originally designed in 1959 by architect Vitaly Gzell for the owner’s parents. It occupies its large acreage block in an elongated arrangement, with distinct sleeping and living zones on a single level orientated to the north-east, separated by a central entry. An original feature was a wide L-shaped terrace wrapped around the living area, offering fantastic views over the property and toward the city. In the late 1960s, the house was extended to attach a sunroom and two additional bedrooms over two levels at the south-eastern end.

The house remained unaltered for almost six decades until James Russell Architect’s commission to transform it for the next phase of his client’s life. She had lived there as a child and young adult, later returning with a family of her own for another generation of inhabitation. Her five children are now grown and living their separate lives, but the idea of downsizing to a different location was at odds with her sense of deep attachment. “I examined the various alternatives and thought, ‘I’ll make my house suit me as I age.’” It became the architect’s task to mediate the expanse by folding in the desired senses of security and intimacy.

After taking stock, James Russell proposed a “big ambit claim” to chop into the structure added in the late ‘60s and create a void in the long north-eastern frontage. “The original house is simply magic,” says James, “but the extension had expanded the living space such that it was hard to know where to settle within the space.” Reinstating the original wraparound verandah re-exposed the living room as an operable corner. The south-eastern end has become a distinct and private peninsula with a three-way aspect for the client’s desired suite of “big bathroom, big dressing room, big bedroom,” sized to adapt to future mobility needs.

Mobility considerations also inspired James’ promise to the client to considerably improve the circulation. Apart from the loaded corridor arrangement in the original bedroom wing, the house lacked clarity. However, this notion went beyond enhancing internal relationships – it unmasked connections between the home and its setting that were latent in the original design, particularly at the rear of the house. “It was very much an inside house, despite sitting within a beautiful garden,” says James. At the back of the dwelling, service spaces were blocking the opportunity for something special. From an architectural perspective, establishing an orientating vista through the house at the point of entry was essential to the overall transformation.

Continuing the tactic of editing, the existing laundry, toilet and terrace at the back of the home were removed to construct a new margin a few metres deep, expanding the long house laterally to formalize a new landscape of sleek, manicured lawn and relocated pool. From end to end, this ration of space – a revelation to the owner, who is daily thrilled to see the full length of the house – orchestrates a series of clarifying transformations along its axis. These include bounding the existing carport and open courtyard that sit behind the bedroom wing with niches of storage, laundry and kitchenette to service the new pool and garden; forming a covered patio threshold between the living room and the lawn, which can be opened wide or secured with two large sliding screens; and providing the owner’s private peninsula with a workspace, laundry and drying area, and a new connection to the front garden and carer’s quarters on the lower level.

James modestly describes the project as a collection of small moves. However, these adjustments have significant effects, improving all aspects of the house with a considered introduction of contemporary patterns and details. For example, ceiling heights are rationalized to achieve a consistent lower edge for the patio and circulation space, and are raised to define rooms. With the once raked eaves re-established as horizontal timber-lined soffits, James was very careful not to change the height at the door line, continuing the lower height past the threshold so that the patio and verandah spaces are felt to be “brought within.”

The location of the kitchen was preserved, but the space was reworked to effectively partner the informal living space and new patio, while also serving the formal dining area and wraparound verandah. The detailing incorporates spotted gum and brush box joinery, complemented by mid-century-referencing pink splashback tiles and opalized glass on the benchtop. These tones reappear in the jewel that is the owner’s private quarters, where spaces for tranquil bathing (open to the sky), dressing and repose are arranged in a seamless relationship. As elsewhere, the internal environment is sheathed in fine insect screening set well beyond the line of enclosure so that the interior can breathe securely.

James Russell Architect’s astute adjustments seamlessly meld future-aware adaptations to bring new equilibrium to the dwelling in its context, amplifying the inherent appeal of the mid-modern genre. Beyond the sensitive interventions, a lot of underlying restoration has also been completed to ensure longevity. The owner’s love of the house underpins this desire for endurance. “Why not?” she asks. “We revere houses that are one hundred years old, but what about houses that are sixty years old? Our work on the house acknowledges its significance in the history of Brisbane architecture.”

Lighting
Copper light by the architect 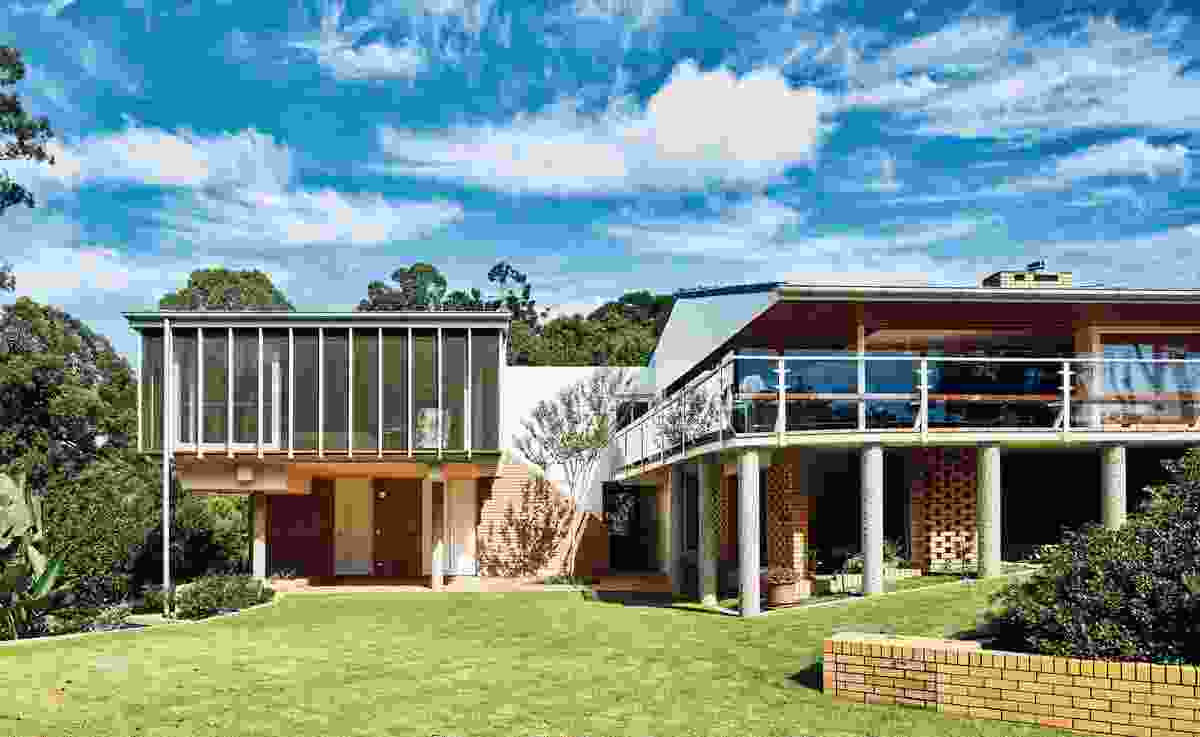 Reinstating the original wraparound verandah re-exposed the living room as an operable corner. 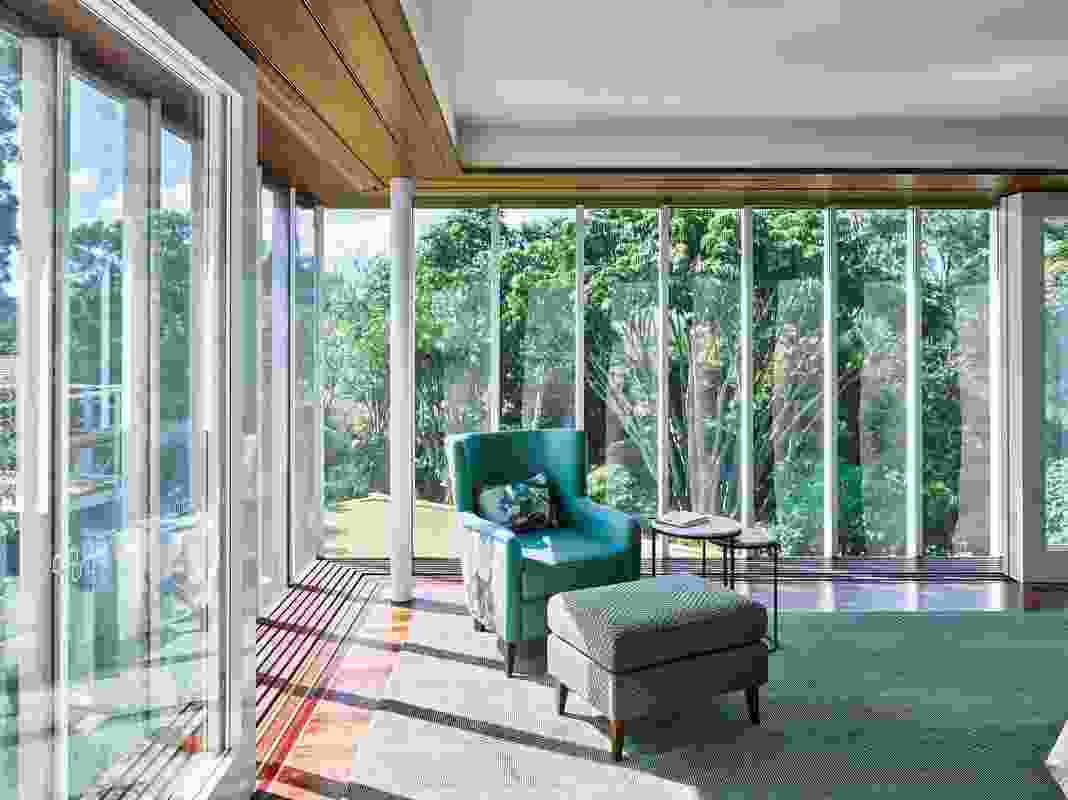 The main bedroom features expansive glazing that offers spectacular views across the property. 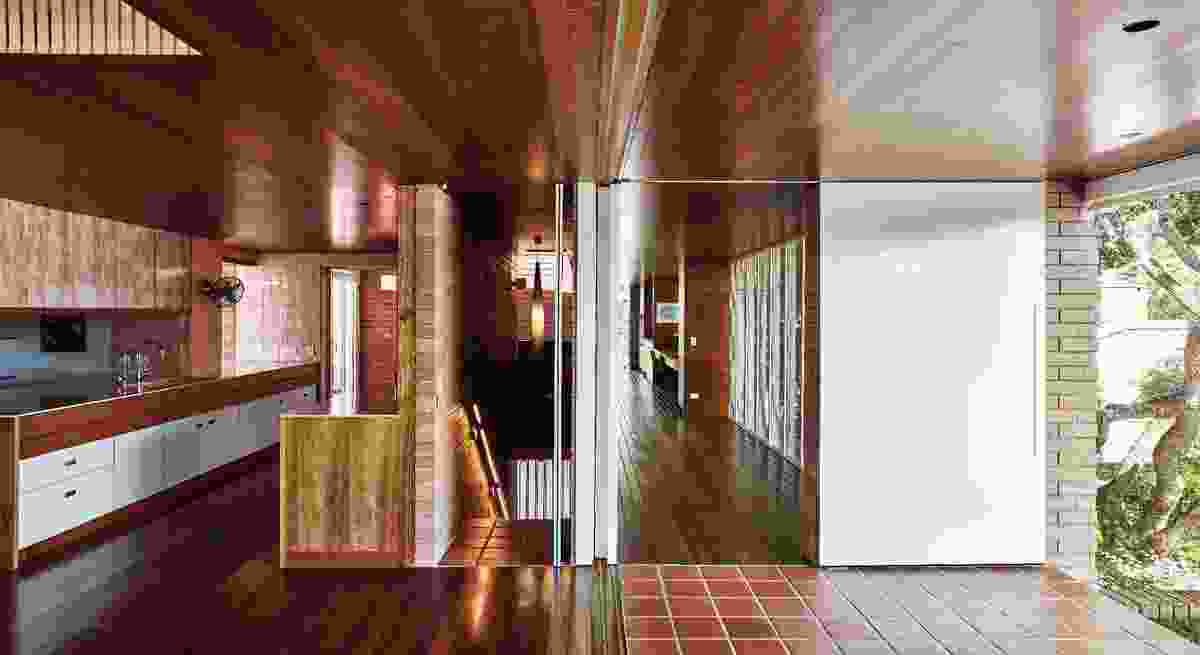 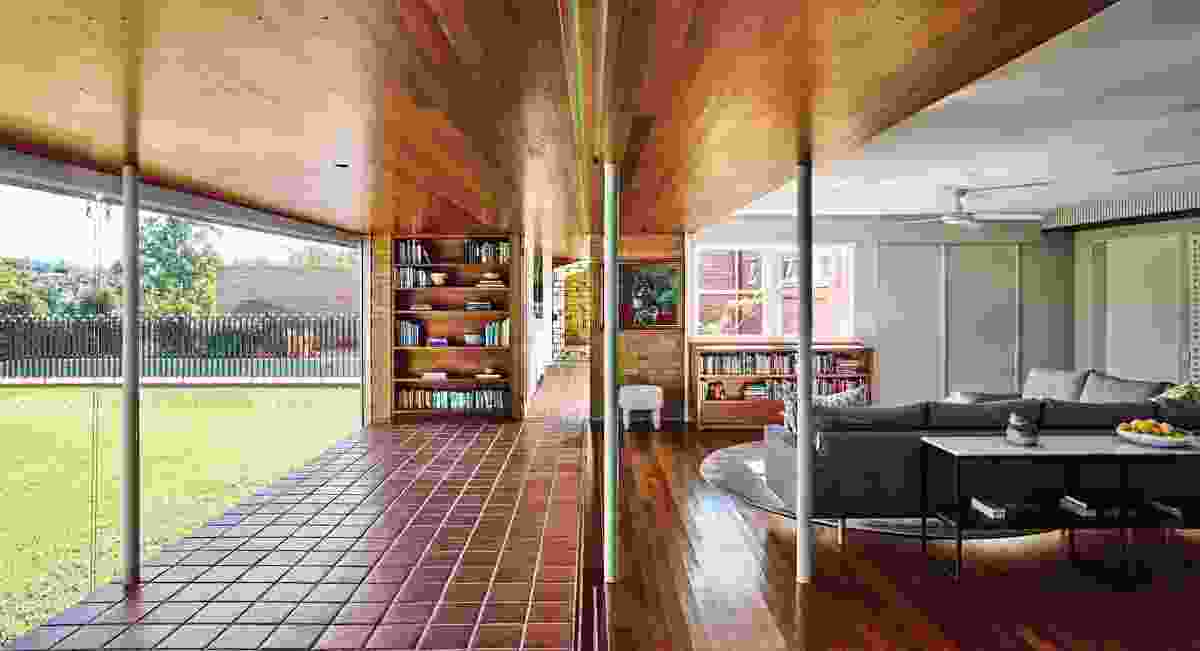 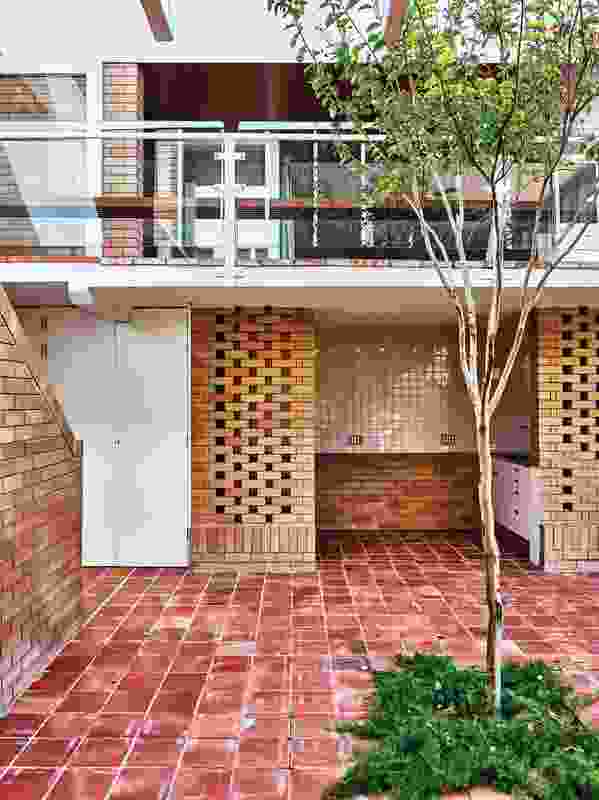 An outdoor kitchen has been inserted on the lower level, joining a number of other new service spaces. 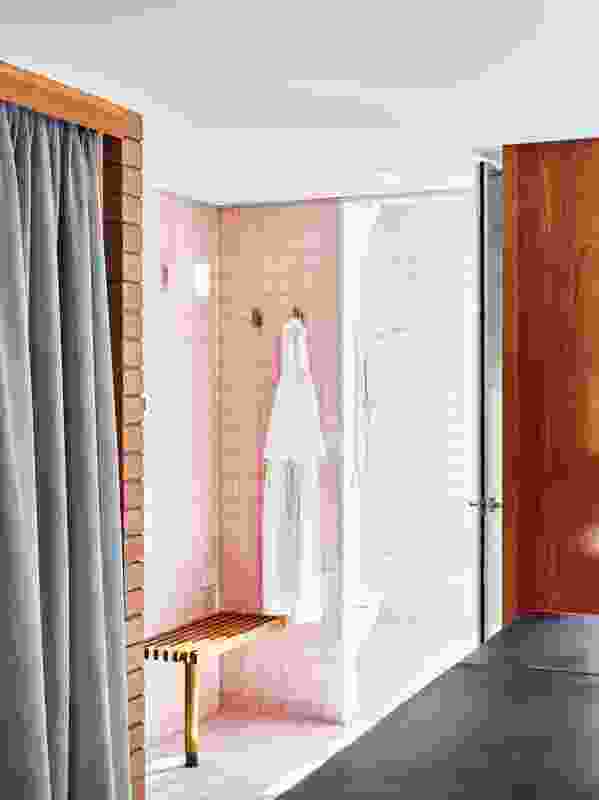 Tranquil spaces for bathing, dressing and repose are elegantly arranged.