This renovation of a dark terrace house by Wolveridge Architects has resulted in a contemporary, light-filled home with striking timber elements and comfortable connections to nature.

A low passage framed by dark-stained timber battens leads from the existing house to the rear extension.

When the clients for East Melbourne Terrace decided to relocate from their home in the suburb of Canterbury, they had specific requirements in mind: a smaller house, with little-to-no upkeep, and something that was modern and new. While a grand nineteenth-century terrace house didn’t quite meet their brief, they loved it enough to purchase it, with the knowledge that significant work would be required before their visions were realized and they could move in.

The clients sought the advice and expertise of architect Jerry Wolveridge of Wolveridge Architects, who undertook their brief to completely renovate the existing terrace and revisit the rear extension, which had been built some ten years prior. The existing bones of the heritage home were good and had potential to sit alongside and inform the new work internally, while the rear of the house needed more extensive work in order to resolve some design issues as well as fundamental functional and structural problems. On a deep block, access to light and outward views were limited, so replanning the ground floor was crucial. The architect saw an opportunity to design a contemporary renovation while respecting the existing house and its heritage overlays. Material selection, joinery composition and space planning were all fundamental elements in reinvigorating the period dwelling.

Originally, myriad small rooms were clustered at the front of the house, creating a series of thoroughfares through which to travel from one space to another. A lounge room accessed immediately off the entry seemed caught in the rabbit warren, with two points of access into the room. To resolve this, Jerry closed off the hallway door with a continuation of the solid wall, giving privacy to the room while defining the entry space as a separate vestibule. The original staircase ascending to the second floor was re-carpeted and given new timber handrails, reinvigorating the stair as an arresting sculpture in all its dark timber glory.

The cluster of ground-floor rooms was reconfigured, creating a guest bedroom and powder room, while a grand drawing room was designed adjacent to the stair. Tall, steel-framed windows were punched through the south-facing external wall, creating picture windows between the skirting and cornice to frame a small bamboo garden. The existing fireplace was wrapped by tall, dark veneer joinery panels, emphasizing the height and scale of the room and referencing proportions typical of late-nineteenth-century residential architecture.

The journey from the existing house to the rear extension is taken through a low glass passage, framed on two sides by dark-stained timber battens. Behind the vertical wall of timber, natural light is filtered through to the new guest bedroom window, while a small garden and a courtyard sit either side and soften the external edges. Incorporating garden outlooks is an important element in Jerry’s built work and design philosophy.

Internally, the extension is markedly distinct from the existing building. Strong lines of clean plasterboard run from ceiling to floor, and any reference to high skirtings or deep cornices is dissolved in long bulkheads and striking timber and black steel joinery. Beyond the new glass sliding doors at the end of the house, a stepped garden is defined by the existing swimming pool and an array of daphne, magnolia, hydrangea and crepe myrtle sits beyond the back door. The existing terrace was hot and arid so the introduction of planting and greenery was important to the clients.

From the top level of the garden, looking back at the house, the rear facade is revealed. Reflecting on the numerous finishes this facade previously featured, the architect used a straightforward strategy: simplify what was there and provide shade and privacy by way of a battened timber screen. The screen sits away from the facade and is fixed to a balustrade, maintaining the balcony walkway beyond and access to a spiral staircase and roof terrace above.

Upstairs the bedrooms were reinstated and existing robes refinished. An ensuite bathroom was added to one of the bedrooms and clear glazed skylights were installed to encourage natural light into these internal rooms. The main bedroom is positioned at the front of the house, with a new walk-in robe and ensuite behind it. This luxurious private suite features tall black steel and timber joinery referencing the ground-floor design language, while large windows in the ensuite and robe skim the top of the bamboo growing below.

Replanning the ground and first floors while reinterpreting their various functions became fundamental to the way the occupants live and work in their home. East Melbourne Terrace also offers its owners the promise of proximity to work and an inner-urban lifestyle easily accessible on foot. While the interior and rear exterior have been transformed sensitively yet strikingly, the new elements have been born from the existing bones, referencing these heritage elements and celebrating the longevity of their nineteenth-century form.

Lighting
Verner Panton Topan VP6 pendant, and Spinning Light BH2 and BH1 lights, all from &Tradition Blown Up Pendant by Inside. 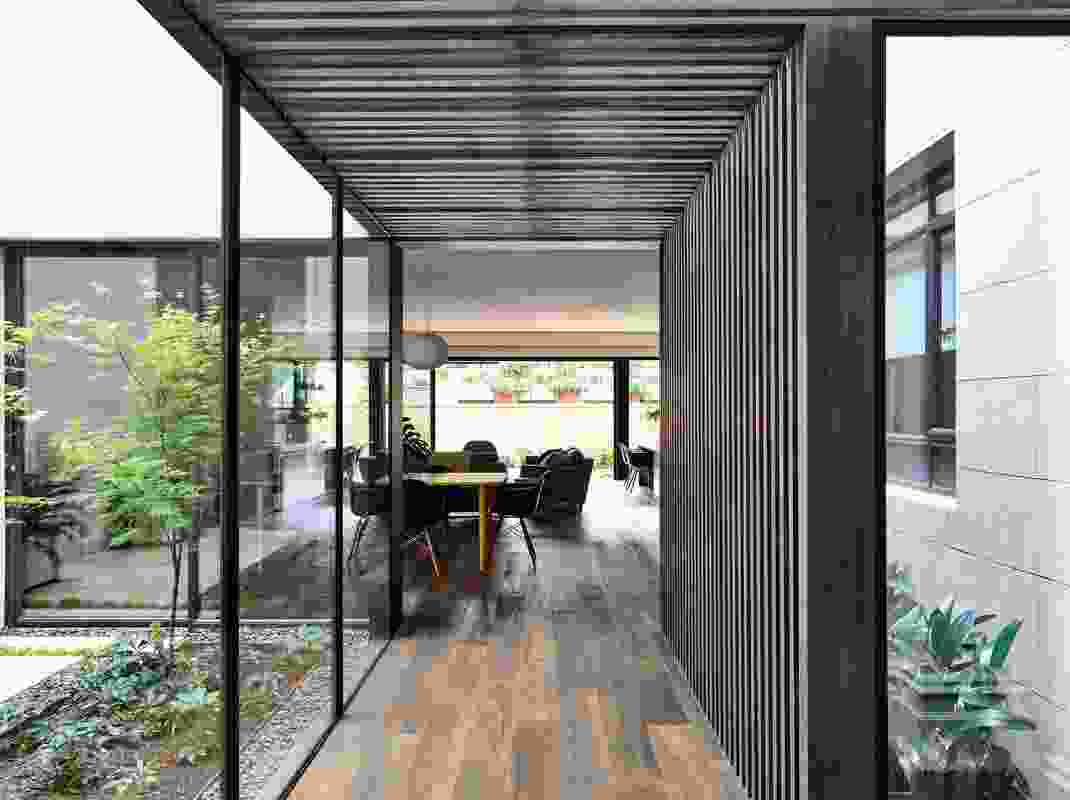 A low passage framed by dark-stained timber battens leads from the existing house to the rear extension. 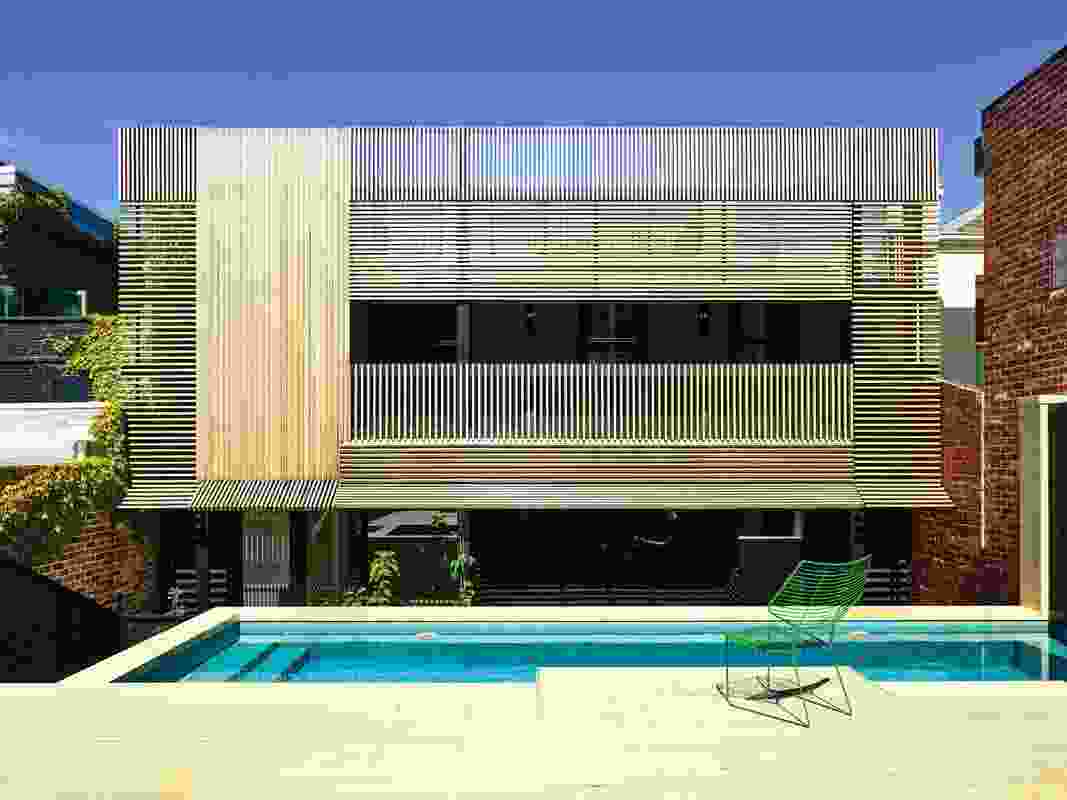 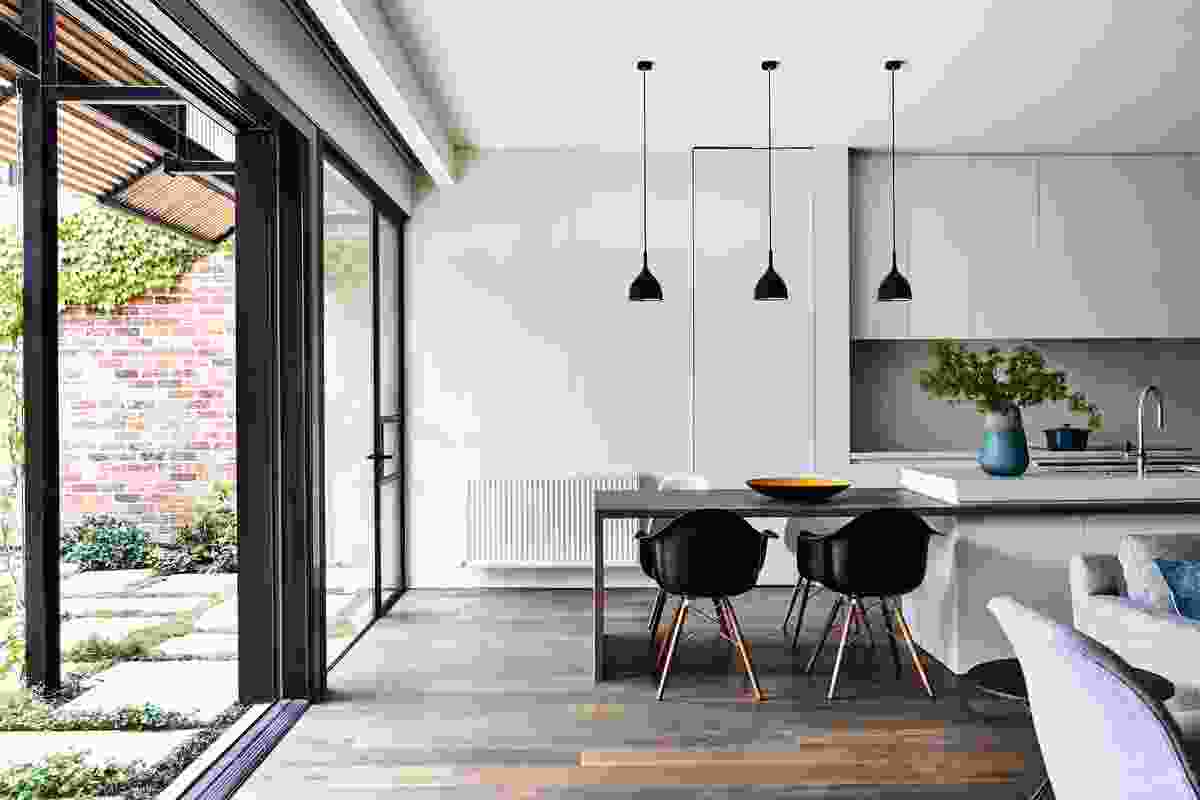 The extension’s interior is markedly distinct from the existing building, with strong, clean lines of plasterboard running from floor to ceiling. 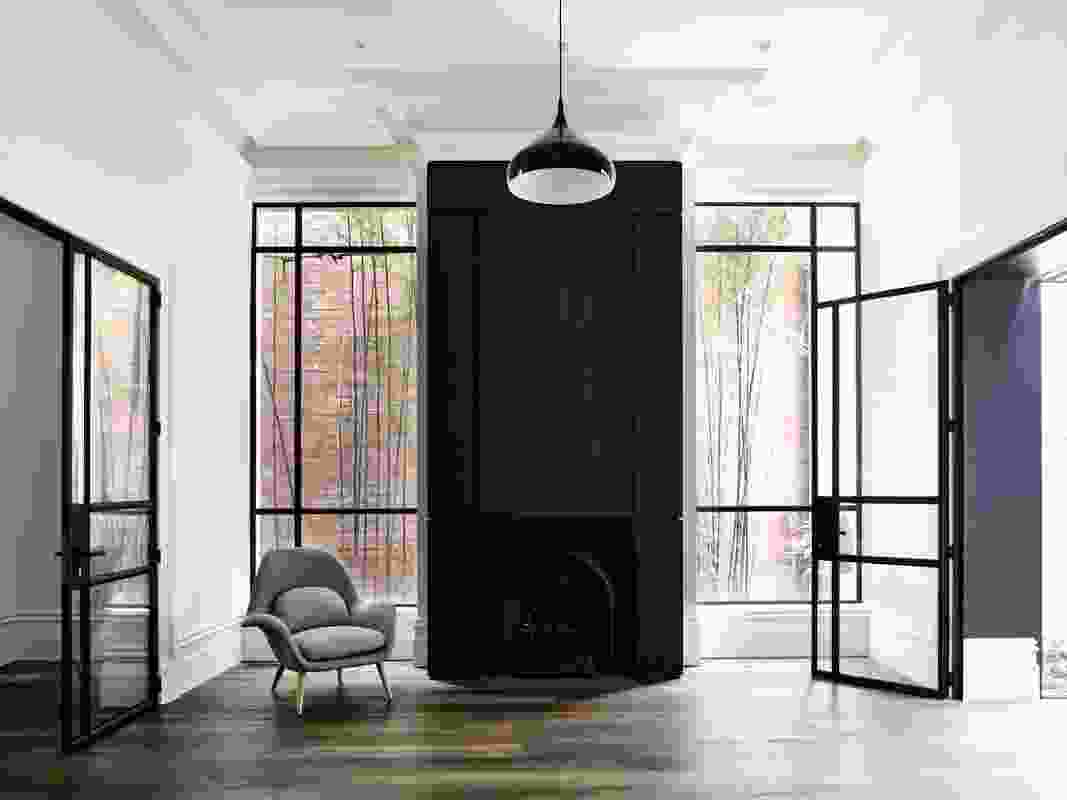 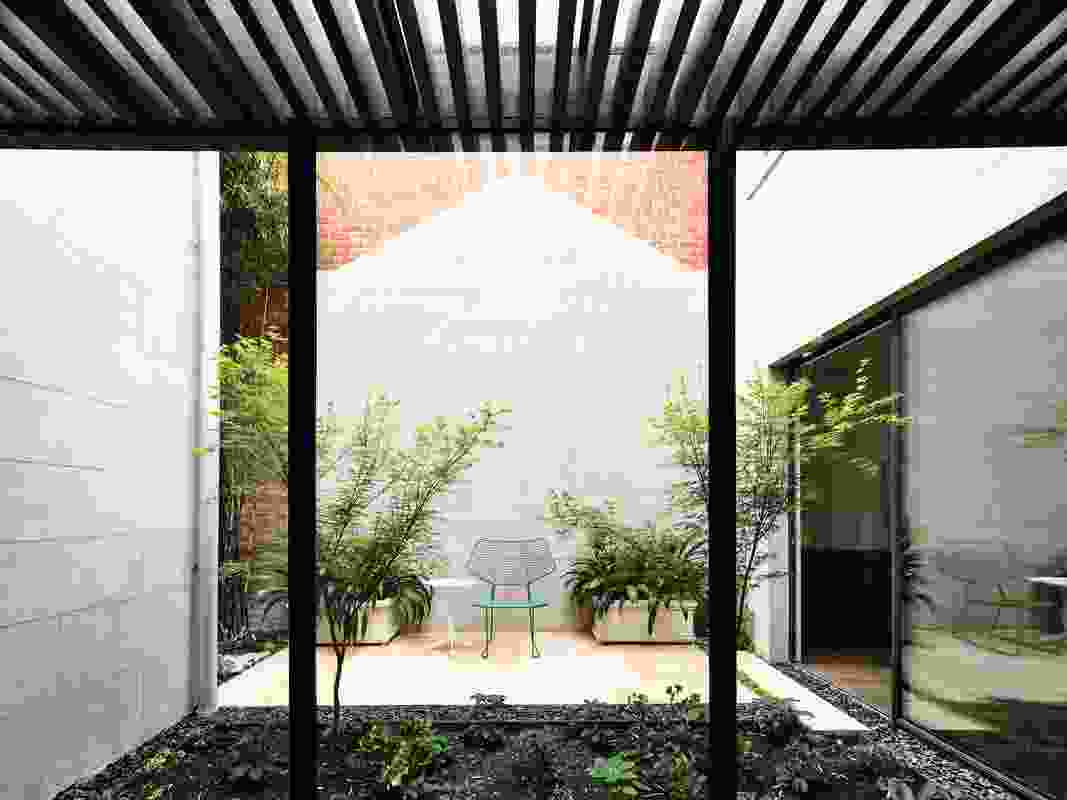 A central courtyard offers a pocket of retreat and lets light into the house. 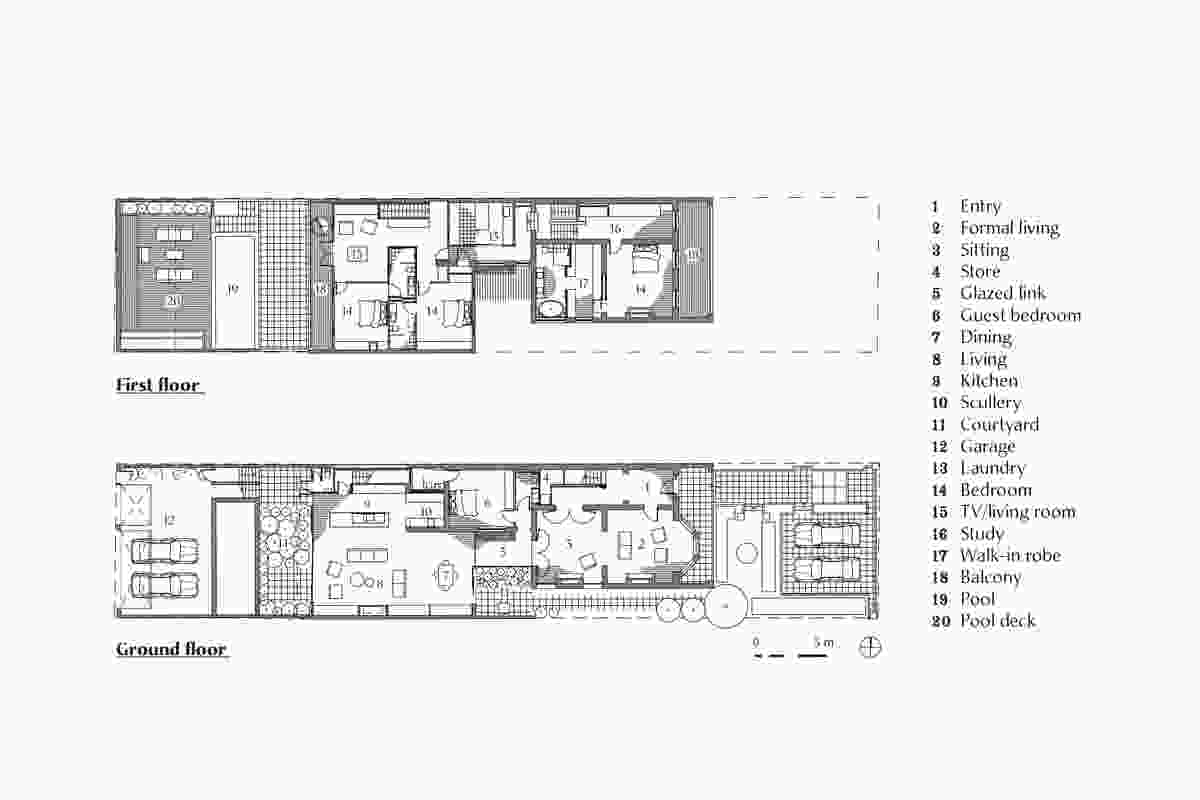 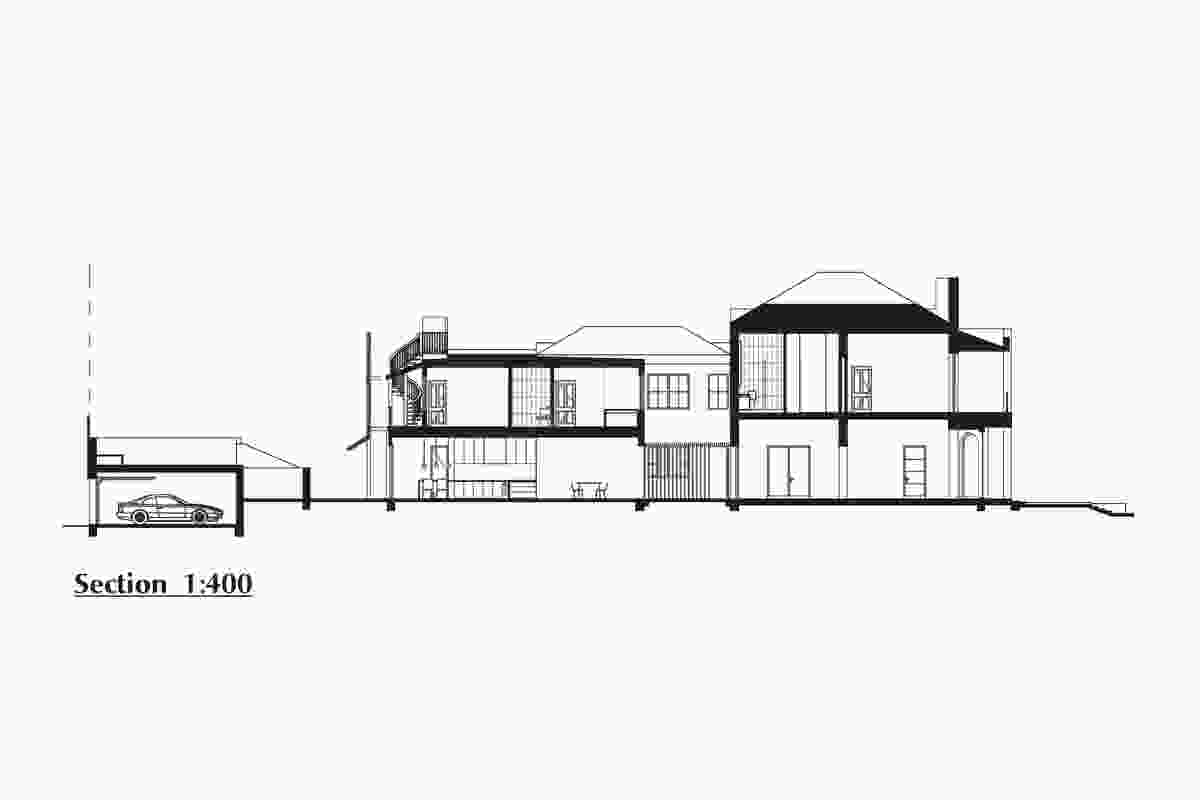