Making the most of every opportunity and a commitment to design detailing have led Rob Kennon Architects to create a warm and inviting inner-city home.

A consistent solid-oak surface covers floor, walls and joinery, concealing everything from the fridge to the alarm system.

Standing in the street, it is almost impossible to tell that an addition lurks behind the formal Victorian facade of the East West House by Rob Kennon Architects, and this is true for many house extensions located in heritage overlay areas. What does lie behind the facade is clever planning that allows light and fresh air into the narrow but deep site, located near the top of Melbourne’s Richmond Hill. As the name of the project suggests, the site is orientated east–west, and the building has been pulled away from the northern edge of the site to allow for a courtyard garden. This move allows for a much larger north-facing facade than would have been possible if the site was orientated north–south.

The formality of the original entry facade is loosened by the design of the front garden, primarily planted with wildflowers native to the Yarra River area. It’s a refreshing departure from the formal, symmetrical domestic gardens often seen in historic neighbourhoods, and this approach by landscape architect Robyn Barlow is carried through into the design of the courtyard at the rear of the site. The first encounter with this back garden is in the transitional zone between the old and new parts of the home, where the growth presses right up to a full-height glass wall. This, along with the bright northern sunlight streaming in, creates the impression that you’ve stepped outside.

Much of the “old” part of the house has been reconstructed to match the original and comprises a series of compartmentalized rooms. Elegant fireplace arches, Baltic pine flooring and timber mouldings are celebrated in these spaces, with custom-designed freestanding furniture clearly defined as new. When looking through the transitional zone you can see traditional planning give way to an open living space at the rear. This linking zone works hard – it is much more than just a space to take you from one part of the house to another. Services, including a bathroom, laundry and stairwell with storage underneath, are all contained within this area.

Open-plan living areas allow a feeling of space in tight, inner-city homes such as East West House. Rob has considered how to maximize the use of space, while subtly defining the various zones within the room. There is extra ceiling height directly above the living room, a change in the way the interior connects to the garden using different window types and sizes, and variation in artificial lighting according to which part of the room you are in. In the summertime, the adjacent garden becomes an integral part of this space when a large, sliding glass door peels back. A basic timber pivot door is placed alongside it for practical reasons: rather than using the sliding door to come and go (as the carport is out the back), you can use the side door.

A real commitment to design detailing is evident in this project. A consistent solid-oak surface flows between the floor, walls and joinery and conceals everything from the fridge and storage cupboards to the airconditioner and alarm system. Often timber veneer is used for such joinery applications, but rather than risk a change in colour from the floor to the walls, the solid-oak joinery is braced to avoid bowing and cupping (just like in medieval times!). The effect is memorable – it’s almost as if the room has lost one dimension. Rob likens it to a blue screen, where all surfaces read as one. The use of timber also gives the space natural warmth.

When standing out in the backyard you can see how the triangular, two-storey rear addition grafts itself to the old part of the house, rising up towards the west. Recycled pressed brick with a rough natural sand-and-cement render references the existing Victorian building, and a timber-framed, set-back pop-up to the east visually reduces the mass of the upper level. Upstairs contains the main bedroom, which again has a consistent material palette. Joinery is streamlined, as it is downstairs, with a custom-designed bed containing part of the robe in the bedhead. Tucked behind the robe is a small ensuite.

While multiple approaches and opinions surround issues of density in Melbourne, using the space on top of a building – a precedent set around the world – has been embraced throughout the city, as shown by its many rooftop bars. At East West House, Rob has introduced a roof deck that sits above the original footprint, but is not visible from the street (abiding by heritage regulations). There’s something almost magical about being in a sea of rooftops and chimneys.

Rob Kennon Architects has made use of every opportunity at this Richmond home; no stone has been left unturned. The rear addition is carefully planned to maximize access to the northern sun, painstakingly detailed so that everything has its place, and designed with subtle variations in lighting, volume and openings to break down the open-plan living area. Although these design moves aren’t new, they have been approached in a sophisticated and sensitive manner, elevating this project to another level. 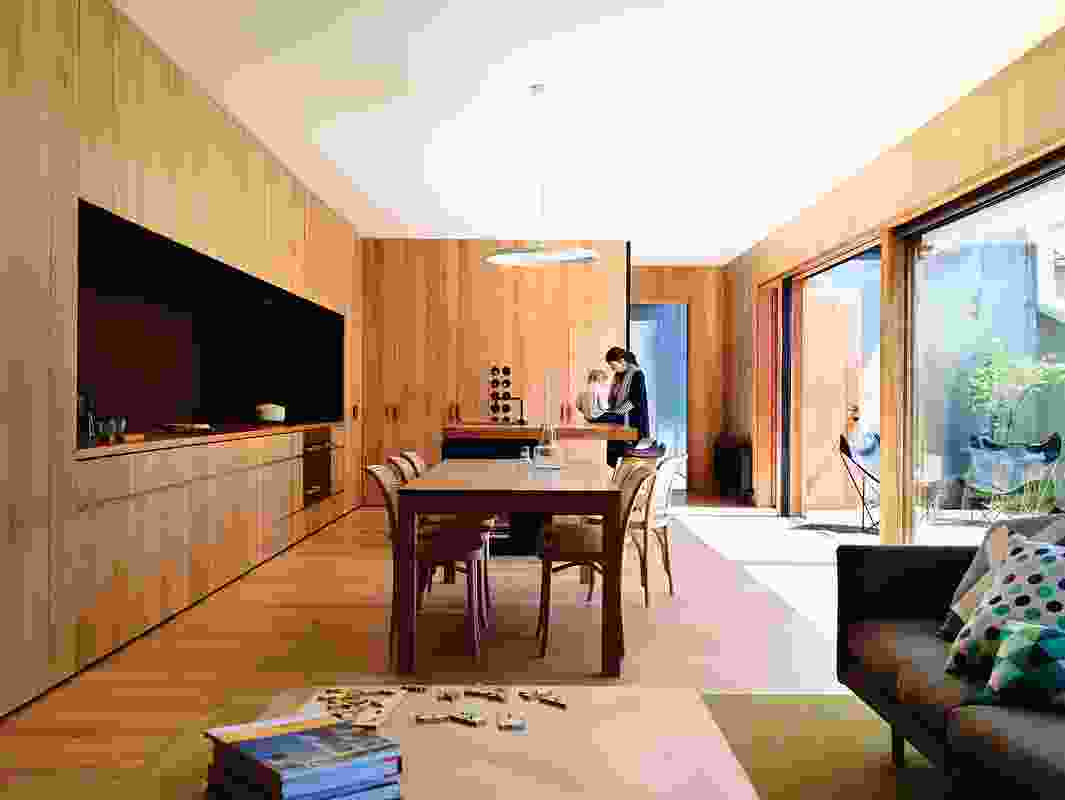 A consistent solid-oak surface covers floor, walls and joinery, concealing everything from the fridge to the alarm system. 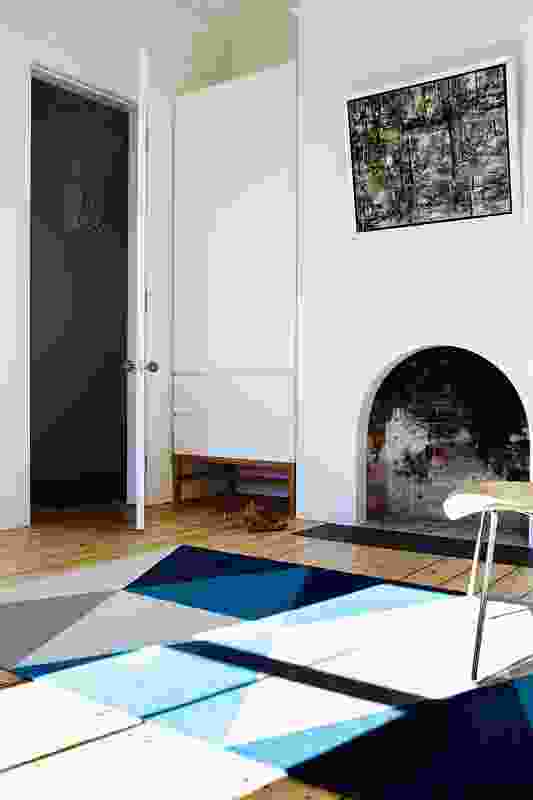 Custom-designed freestanding cupboards are clearly defined as new in the original part of the home. 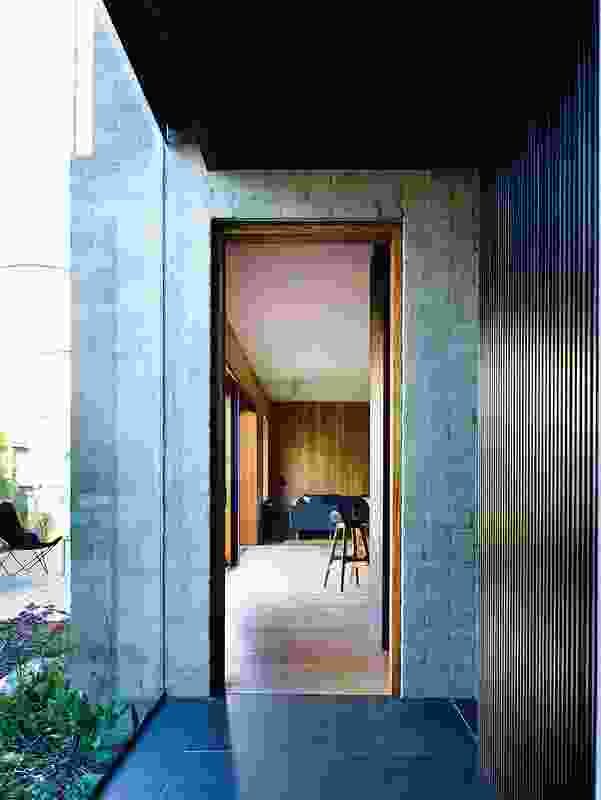 Looking through the transitional zone between old and new, with the garden pressing right up to a full-height glass wall. 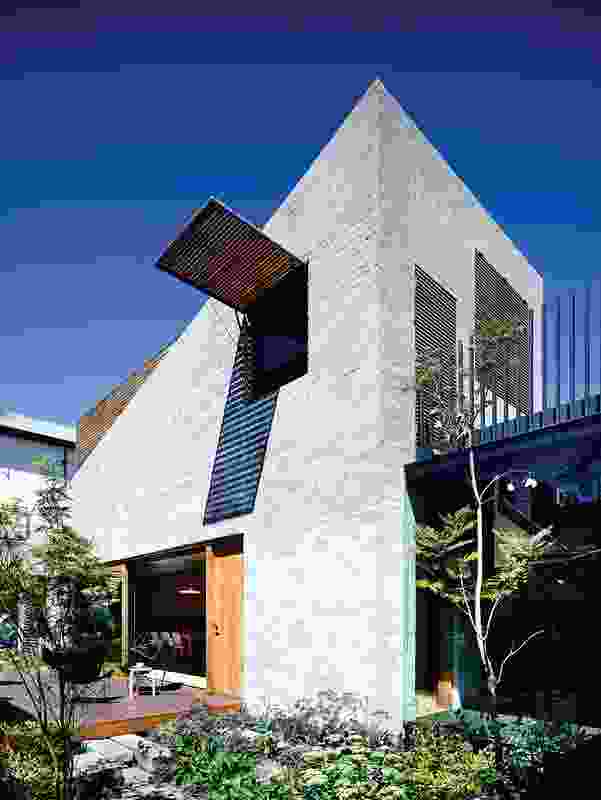 The triangular, two-storey rear addition grafts itself to the old part of the house, rising up to the west. 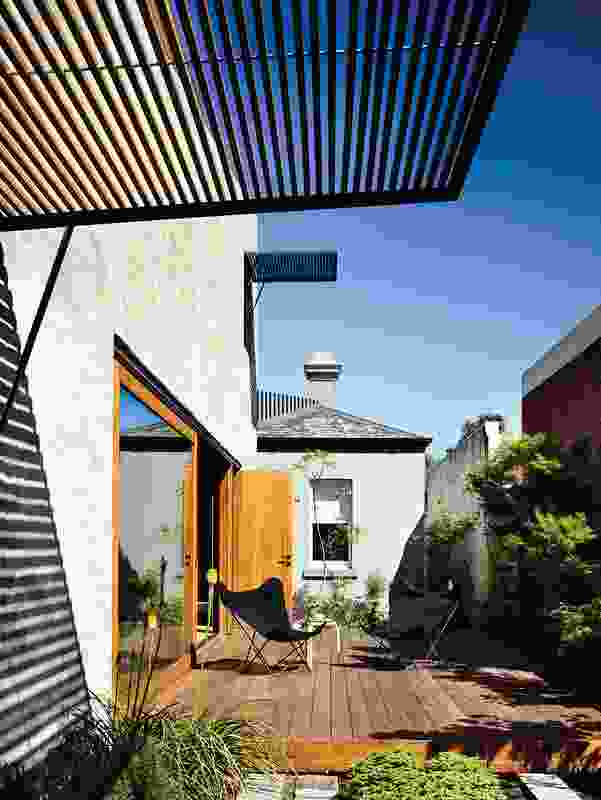 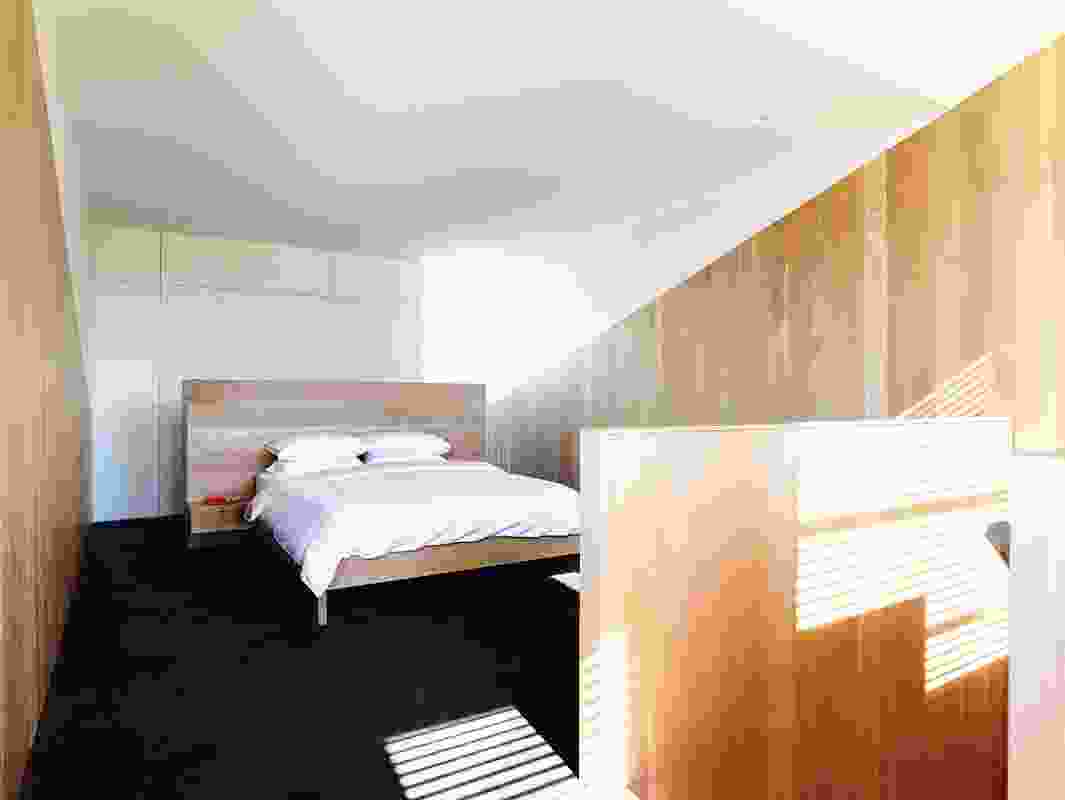 In the main bedroom on the upper level, a custom-designed bed contains part of the robe within the bedhead. 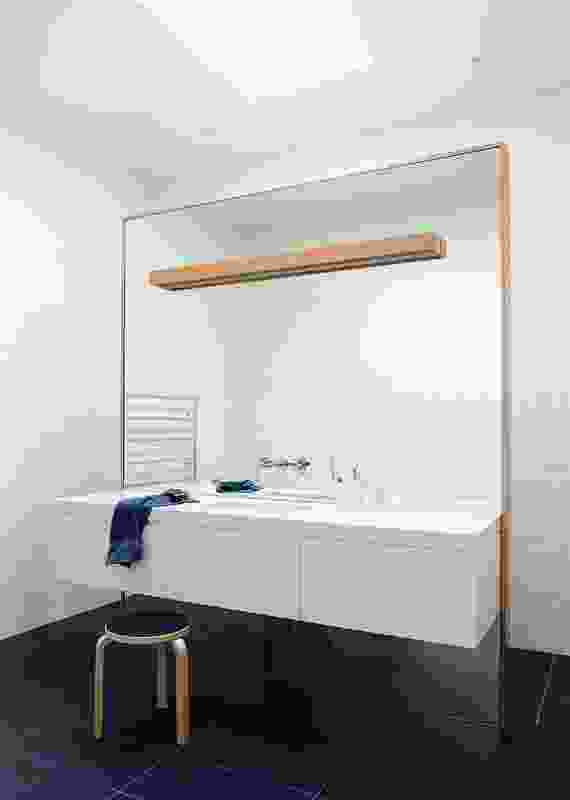 A skylight allows natural light into the new bathroom in the original part of the house. 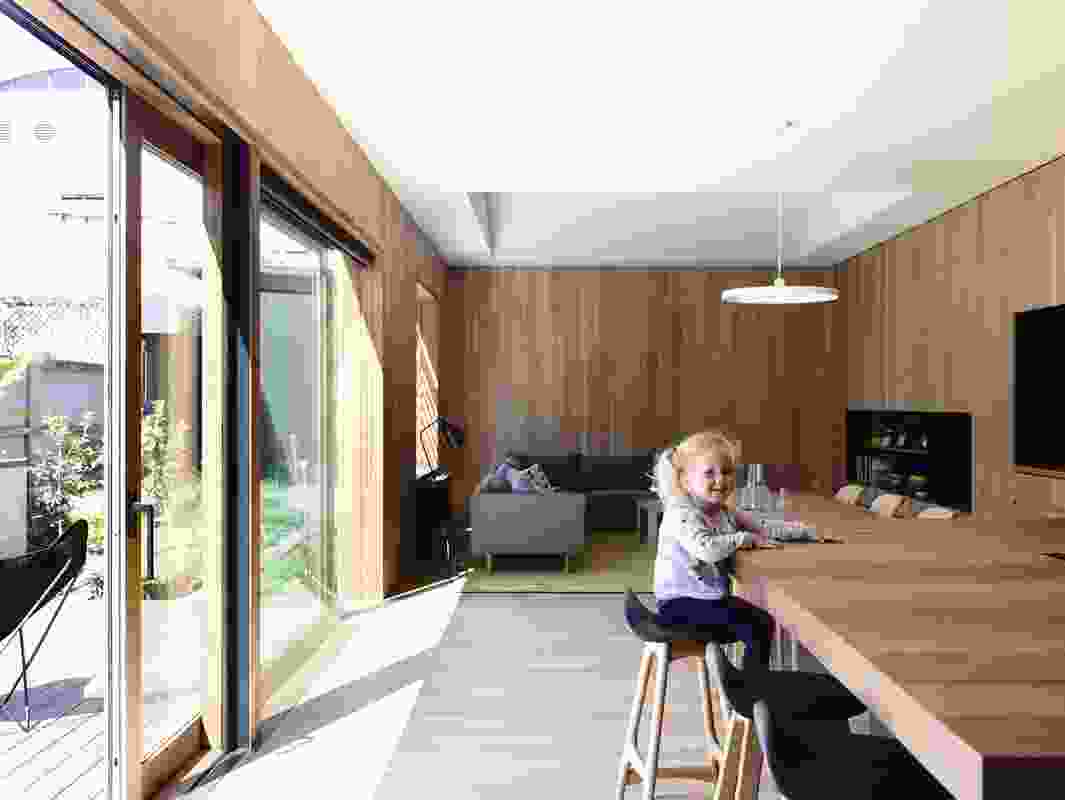 There is extra ceiling height directly above the living area to subtly define the various zones within the open-plan room. 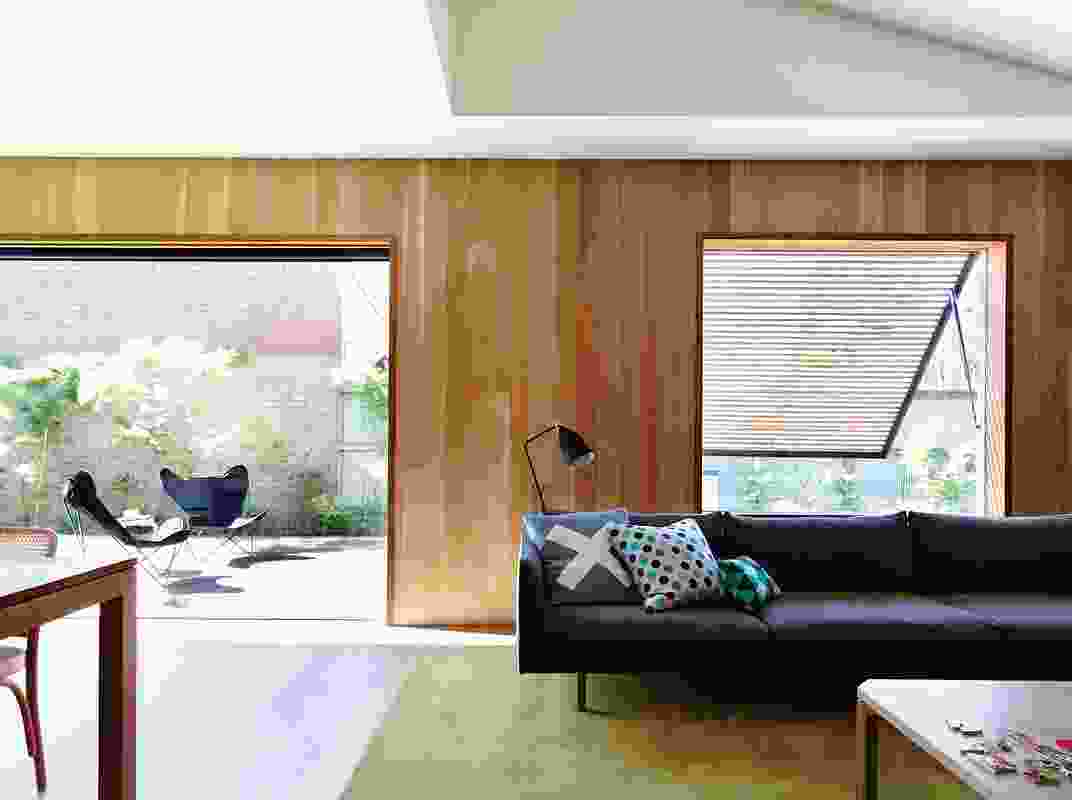 Large sliding doors peel back to create one large living space that includes the adjacent courtyard. 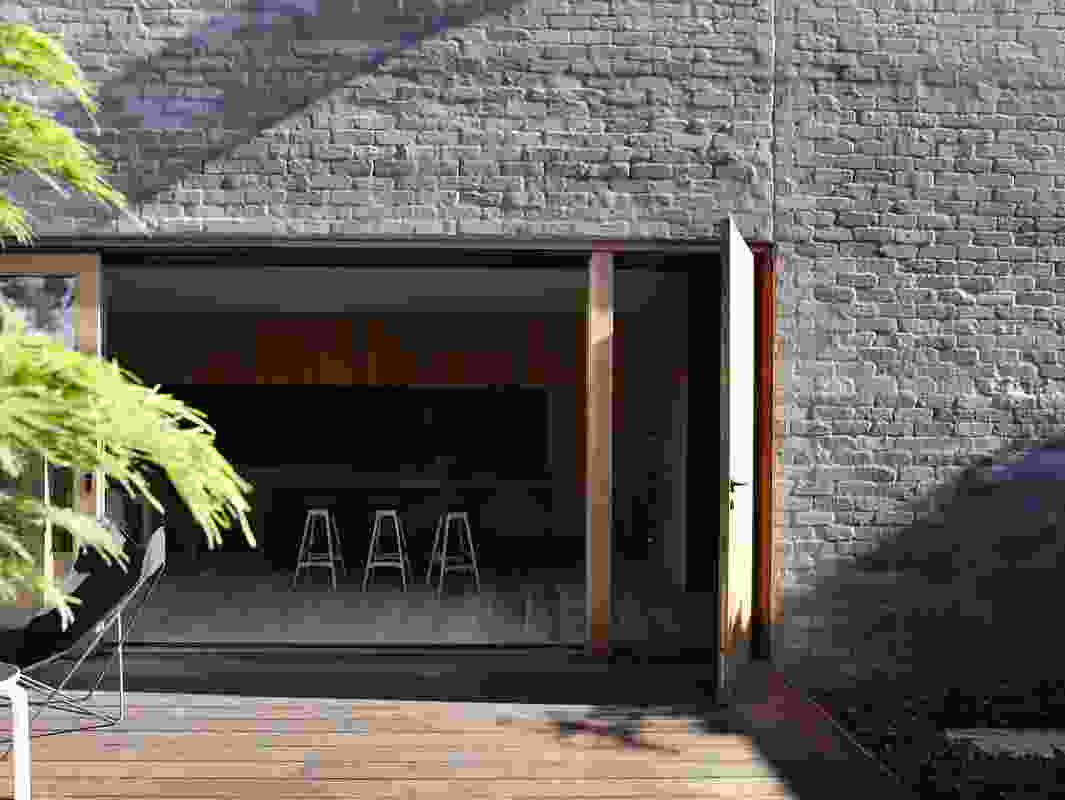 A basic timber pivot door is placed alongside the large sliding door for practical reasons: rather than using the sliding door to come and go (as the carport is out the back), you can use the side door. 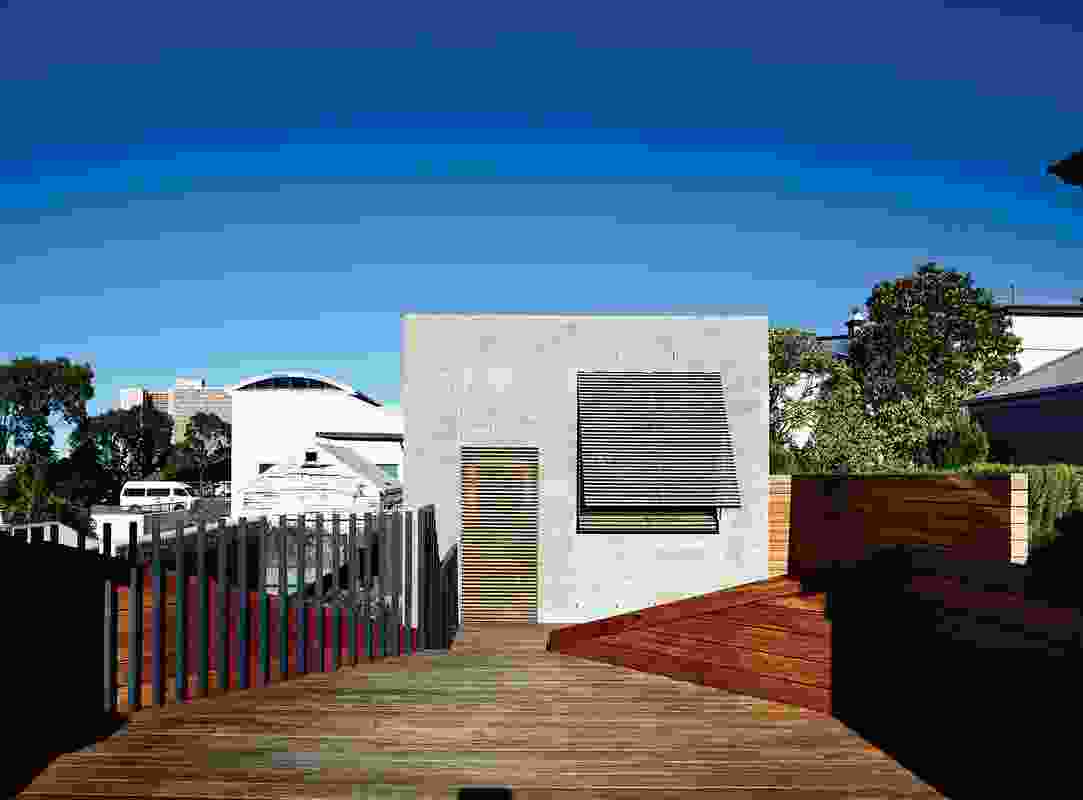 A roof deck sits above the original footprint of the house but is not visible from the street. 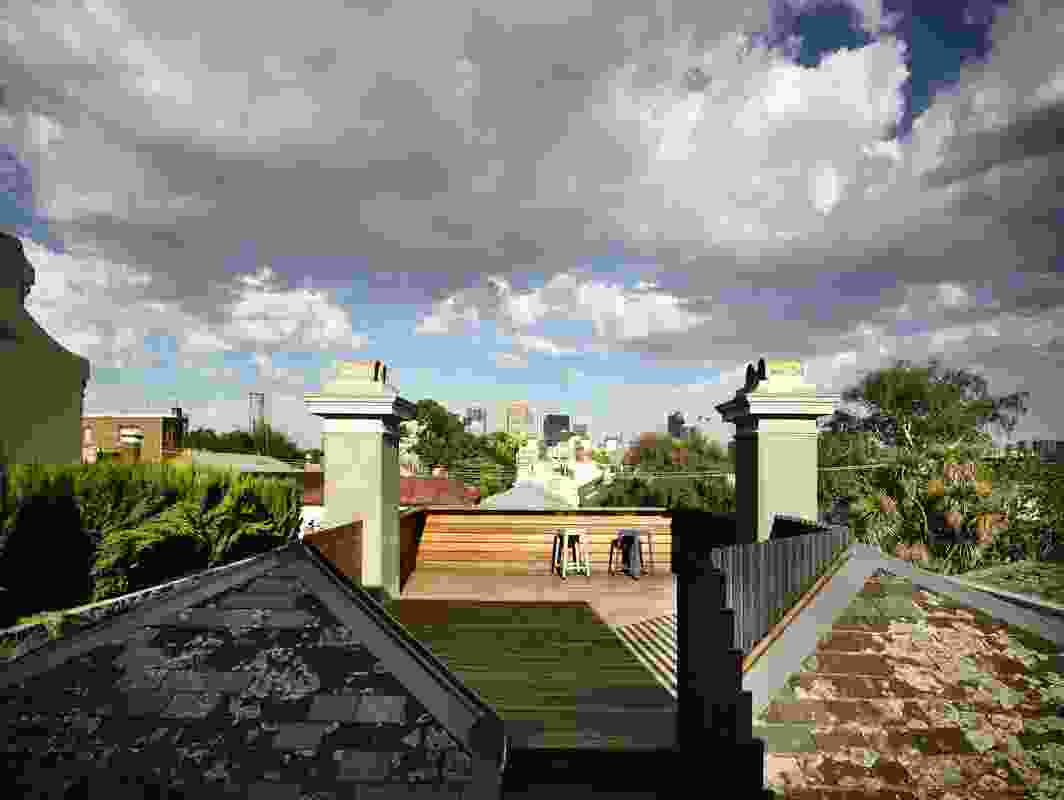 The roof deck overlooks the rooftops and chimneys of inner-suburban Richmond. 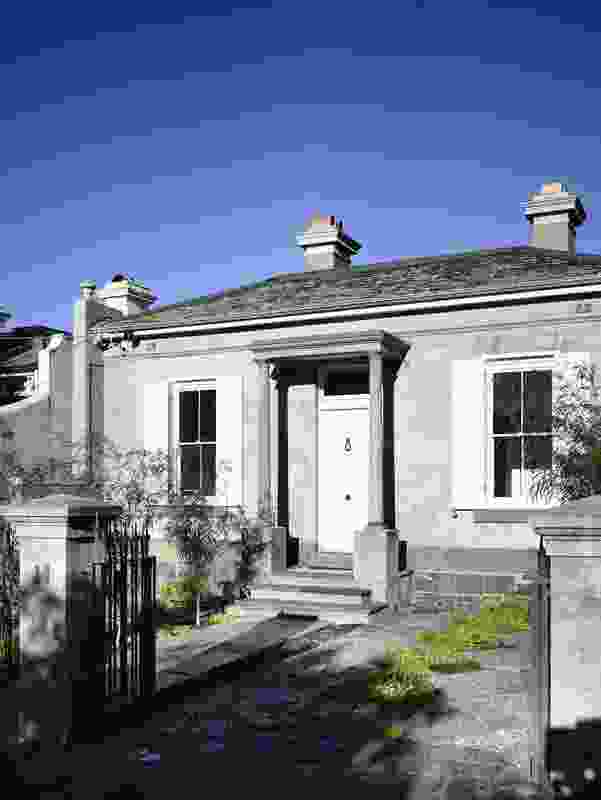 The formality of the original entry facade is loosened by the design of the front garden, primarily planted with wildflowers native to the Yarra River area.