Lippman Partnership’s exuberant addition to a synagogue campus in Sydney responds to two significant twentieth-century architectural works in a dialogue that reflects the plurality of the Jewish faith.

The building’s structural geometry is derived from the Star of David. Other abstractions of religious symbols include the geometric pattern on the northern glazed wall, which interprets the Seven Species.

“Synagogue is a spirit continually expressing what it wants to be; To be a place to meet under a tree; To become a great center of communion – a place under many trees. Free from a single traditional plan, free from a space everyone remembers as typical and bound to no continued association with a powerful style, ‘Synagogue’ is freer to become what it wants to be. ” – Louis Kahn1

At nightfall on Fridays and all day on Saturday, the Shabbat (the Hebrew Sabbath), the Emanuel Synagogue campus in Sydney’s Woollahra welcomes a vibrant community. The congregation enters from Ocean Street, one of east Sydney’s grand arterial roads, via a generous forecourt with mature trees and greenery. After some mingling and exchange, worshippers cluster and disperse to distinct rooms and modes of prayer. From a traditional Masorti Service conducted in Hebrew to contemporary interpretations in Progressive Service, from the Shabbat Live Service with instruments and melodies to the Renewal Service prompting reflection, parallel and sequential communions at Emanuel Synagogue have embraced the diversity of Jewish faith for more than six decades. The recent addition of the New Sanctuary and the reconfigured kindergarten by Lippmann Partnership observe and amplify this heterogeneous ambition.

Two synagogues flank the garden court to the east and north, and mark the campus’ early evolution. Designed by significant émigré architects Samuel Lipson and Aaron Bolot in 1941 and 1966 respectively, these mid-century works capture a lively intersection between the development of liberal Judaism and European-inspired modernism in Sydney. The founding synagogue, originally called the Temple Emanuel, overlooks the court and is gently authoritative. Well preserved, the two-storey, red-brick facade is restrained yet inviting, its classic order playfully offset by dynamic asymmetries. A small set of steps leads to an elevated porch and three tall portals, which demarcate the civic from the sacred realm. From here an intimate vestibule leads to a ten-metre-tall inner sanctuary. With capacity for twelve hundred patrons across the main level and the mezzanine, the space is significant and elevating. A gently inclined floor orients the room toward the ark while tall stained-glass windows admit soft coloured light to this tranquil setting. Despite several ad-hoc alterations (1954, 1966), the original order remains dignified.

Deferential to its predecessor, Bolot’s 1966 Neuweg Sanctuary is perched low, at grade with the street. An independent volume along the northern boundary, it presents as a pavilion within the court setting. The masonry palette and fenestration details of the Emanuel Temple are loosely recalled, albeit more elementarily. The prayer hall interior is direct and austere, featuring a brick structure, stained-glass windows and plastered interior. Originally facing east along its long axis, the room was reoriented to a northern altar to achieve a wider pattern of assembly. In placement, proportion and sensibility the Neuweg Sanctuary offers a distinct environment from its older counterpart and together they support a variety of experiences in the synagogue precinct. Commissioned to add a third public room to the campus, Lippmann Partnership extends this rich and episodic architectural trajectory and further gestures to the broader history of postwar synagogue architecture.

In the years that followed World War II, and throughout the 1950s, attitudes to synagogue design were probed and tested. Within dominant centres of Jewish migration, most visibly those in the USA, Jewish intellectuals promoted modern architecture as an appropriate medium for a dynamic Jewish expression. Motivated by the need for cultural identification on the one hand and national assimilation on the other, many believed that modernism synthesized the essence of Judaism with American democracy and its promise of freedom.

The partnership between suburban congregation and modern architects was mutually engaged and reflective. Dismayed by the expressive limits of early modernist vocabulary, postwar architects sought to revise and renew the modernist idiom and looked to religious commissions as fertile ground for experimentation. Nature, light and air were deployed for transcendental impact while collaborations with modern artists legitimized narrative and symbolic associations. In response to the synagogue’s integration of religion with cultural activities, centralized building types were revised as layered and multi-hierarchical constellations. And although by no means a definitive recipe for a Jewish institution, such themes were emblematic of the postwar disciplinary debates and ongoing evolution of the modern movement.

Emanuel Synagogue’s programmatic brief for the new works was informed by a progressive ethic. With a rapidly growing membership, additional accommodation was needed for day-to-day religious services. The Emanuel childcare and education facility, active since 1954, was to be further extended as a bespoke preschool setting. Beyond such specific use, the client requested an adaptive architecture; a flexible environment that could support cultural events and religious rituals, community formation and private worship. For the board and membership of Emanuel Synagogue, the revitalization of the synagogue campus was ultimately an opportunity to frame the campus as a community precinct.

Concentrated as a two-storey block, new additions are to the south of the main synagogue and replace the existing childcare and playground infrastructure. The battle-axe site, with pedestrian access from Woods Avenue, is framed by a hybrid residential fabric and features a mature Morton Bay Fig (Ficus macrophylla) with a magnificent canopy. Logically organized across two levels, the functions are materially coded: a childcare centre within a concrete podium supports steel-framed public rooms above. The sectional strategy adds to the layered campus topography. Three sanctuaries now sequentially step up, each time reorienting the user relative to the campus and the street.

The steel structure is precisely engineered and bold in expression. Triangular columns and crossbeams taper to fine ends and connect via minimal metal pins. A bright red colour palette highlights the structural lines and adds vibrancy to the floor and furnishings. The elemental composition and logical assembly system evokes a sense of nomadic transience, as if it were readily hoisted up to shade a community gathered for prayer.

The new building was conceived as a singular envelope protected by a skillion roof, with an operable wall that demarcates the volume in two. A formal interior defines an elegant forum to the south, intimately held beneath the inclined timber ceiling. Fixed seats, on a gentle ramp, half circle the aron kodesh (holy ark) and the reading desk. The aron kodesh has been crafted from local timbers and is the focal point of the room, cast in diffused light via an overhead aperture. When the partitions are removed, the 260-seat sanctuary triples in capacity during high holidays and religious festivals and is variously adapted for concerts, performances, films and functions.

Glass extends across the outer envelope and the overt transparency of the room is immediately striking. The unruly green upper branches of the Morton Bay Fig feel immediate and tactile, dramatically superimposed over the network of red steel. Infused with nature, natural light and fresh air, the architecture is exuberant.

Triangles permeate the design. The steel crossbeams brace diagonally in triangular and diamond formations and the timber ceiling panels repeat the geometric emphasis. Architect Ed Lippmann describes the geometry as derived from the Star of David, a device further employed to abstract religious depictions – the graphic screen applied to the northern glazed wall is an interpretation of the Seven Species and the privacy panels on the western boundary represent the Parting of the Seas. Janet Laurence’s whimsical Tree of Life, a glass artwork in the main synagogue entrance vestibule, further invests the architecture with allegorical content and adds a contemporary layer to the twentieth-century building.

An elevated platform, lightly held between the old and the new fabric, reconfigures an urban void as a new court. From here one can consider the eclectic network of gardens, courts, rooms, vestibule and interconnecting passages that now constitute the institution. The inherent potential of these accumulated layers, beyond their diversity, lies in their promise to invest cultural and religious rituals with participatory choice, inclusion and liberty. 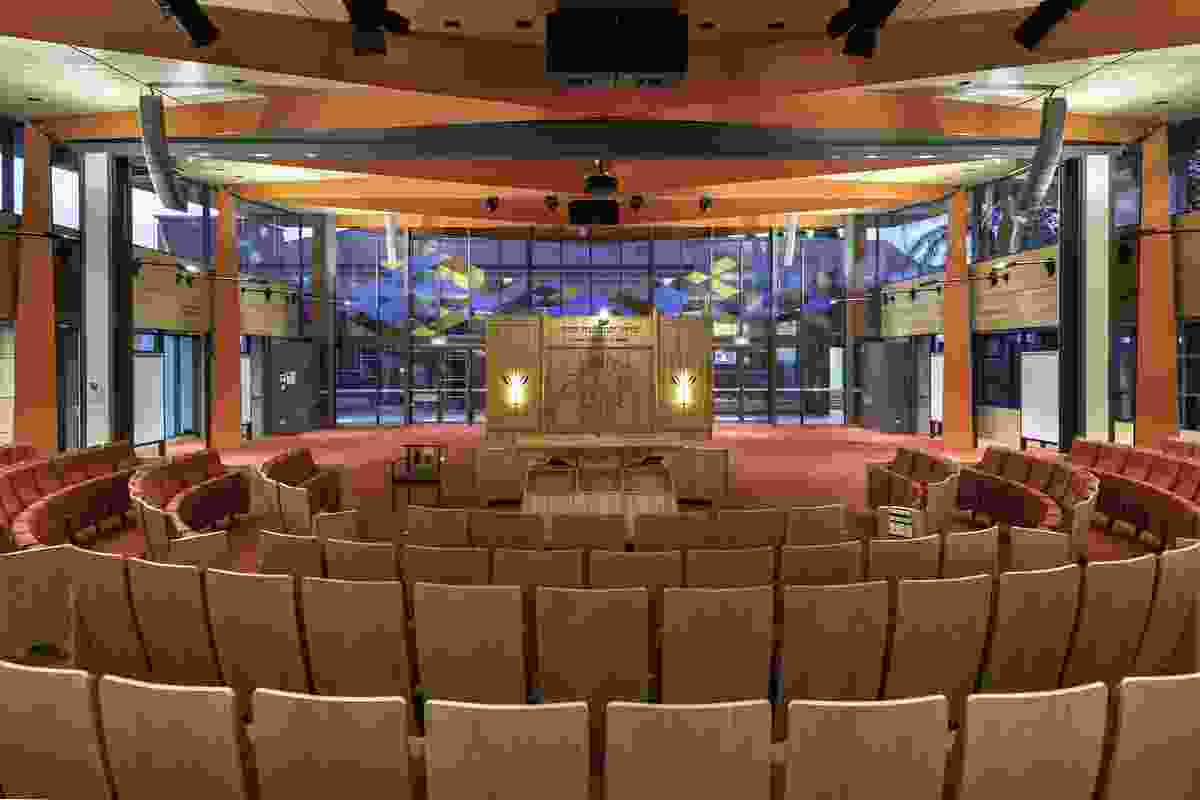 The building’s structural geometry is derived from the Star of David. Other abstractions of religious symbols include the geometric pattern on the northern glazed wall, which interprets the Seven Species.

Lippmann Partnership’s building is a large and open public room for the Emanuel Synagogue campus, designed to accommodate varied use. 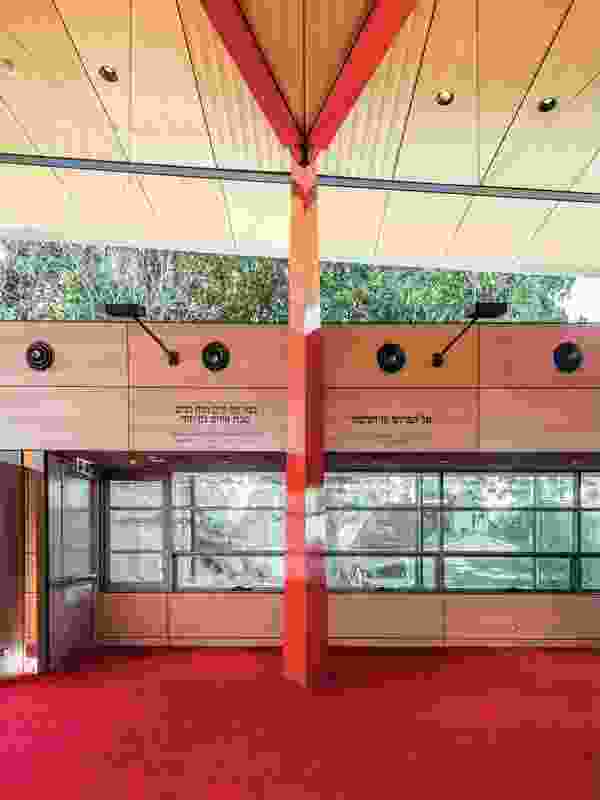 Natural light and views out to the landscaped garden contrast with the elemental composition and vibrant red palette of the structure. 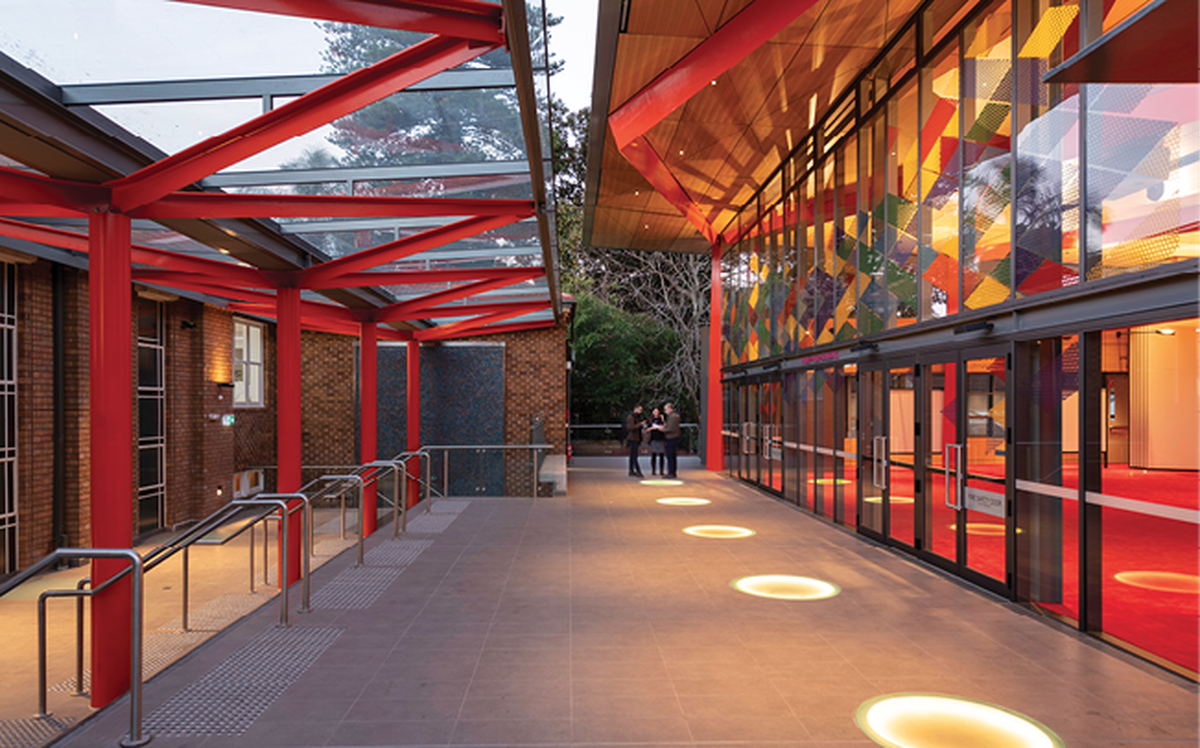 A covered courtyard connects the building to the main synagogue, designed by Samuel Lipson in 1941, and provides a gathering place for the community. 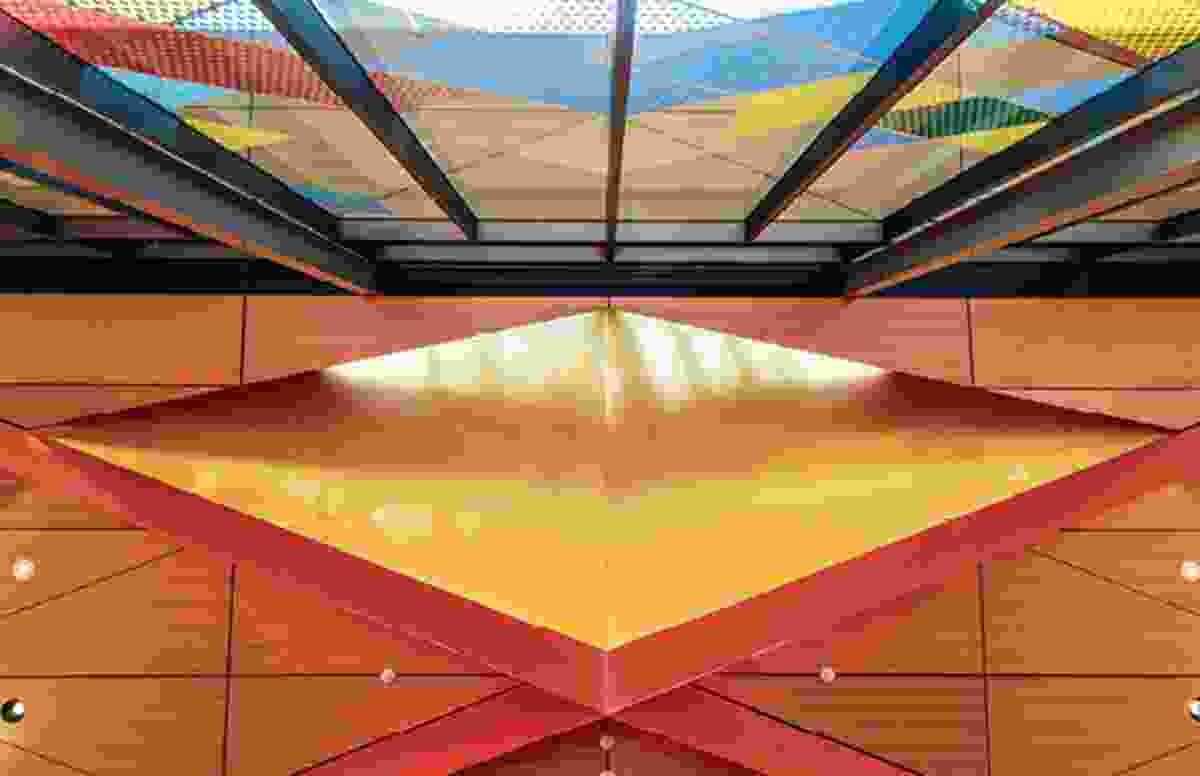 Roof lights further accentuate the overt transparency of the room.