“Are we there yet?” Liam Young reviews a recent exhibition at the London Festival of Architecture that speculates on Australian architecture through the idea of the road trip.

The exhibition as installed at the University of Westminster’s Bridge Gallery.

I remember the hot and sweaty drives to the beachside caravan park. In some form, the road trip has long been a part of the Australian psyche: the highway to nowhere, that endless beat stream of consciousness, fleeting places stitched together as an unfolding narrative, destination unknown, driving for the experience of the journey itself. Like the iconic tagline from Easy Rider, a man went in search of America, but never found it.

This romantic vision is rendered in a uniquely Australian way in Emoh Ruo, the Australian exhibition for the International Showcase at the London Festival of Architecture. The beat-poet ramble is replaced by the kids in the back seat screaming, the flea-bitten motel by the fibro holiday home, the wild rolling highway by the rhythm of vernacular town signs that mark the edge of aspirational communities. These same signs are the exhibition’s framing device.

Curated under the theme of “The Welcoming City”, Emoh Ruo is a tour of Australian architecture along three tracts – the vernacular, the built and the speculative. The exhibition is modestly housed in the corridor of the Bridge Gallery in Westminster, a fitting transition space, a microcosm of the highways and byways that the exhibition catalogues. This cold, fluorescent London corridor is tinted with a sweet nostalgia for the signs and iconography of the small towns I remember passing through on my own school holiday road trips. The three built projects in the exhibition are all sited along the Australian road network. The sculptural icons of DCM’s gateway to Melbourne; the Craigieburn Bypass by Tonkin Zulaikha Greer, Taylor Cullity Lethlean and Robert Owen; and the Heide Museum’s Helmut landscape sculpture by Cassandra Chilton and Tanya Court all form iconic city gates and boundaries, signifying aspirations of place-making rather than being places in themselves.

This collection of signs also marks the journey through a global atlas of speculative projects by six invited Australian architects. Like a bag of mixed lollies one gets from a petrol station pick ’n’ mix, it is an intriguing assortment of practices, from the big corporate office to the small and dynamic studio. Melbourne firm Minifie Nixon takes us on a tour through Mildura with a miscellany of small, catalytic projects scattered about the city – an island resort, a street orchard, an academic retreat and a sporting paradise anchor islands of intensity around which the rural city can grow. Similarly, the small design studio Point Supreme identifies and remakes the hills of Athens in an effort to rebrand the city as a destination in itself, rather than just a departure point for island hoppers. The Eco Hill, Cultural Hill, Olympic Hill and Wildlife Hill all form a new topography of urban events embedded in the grain of the ancient city. Large corporate firm Hassell has choreographed its own landscape journey through three site-specific pavilions for Rottnest Island off the coast of Western Australia. The first station point is tuned to frame the horizon, the second surveys the terrain from the island’s high point, and the third is a floating pontoon in the calm waters of a protected beach. In Ljubljana, Solvenia, Kokkugia, a small design studio fragmented between London and New York, has been studying the retail patterns, pedestrian networks and morphology of its locations’ urban landscapes to form a glossy tectonic field of public and retail space.

As with the vernacular signs marking city limits, what is common to each of these projects is both a modesty of scale and a commitment to the understanding and making of place. Rather than render an image of the contemporary Australian architectural landscape in itself, the exhibition presents place specificity as a methodology and a discourse. It is a practice of violent sensitivity that seems to run against the grain of the international office and its current mode of closed and inward-looking technique-based research. It seems that from our isolated island at the bottom of the world comes a methodology that is both unfashionable and unexpected. Like a strange, flightless bird on the Galapagos, the place-specific architecture that is iconic in Australia continues to evolve. The persistence of this strange, lumbering beast we call genius loci, the cliché of place, the touch-the-earth-lightly mantra is perhaps what makes us quite unique and, possibly, quite cool, but it still seems too elementary to be the dominant speculative agenda.

Collectively titled “speculative” in Emoh Ruo, these place-specific works perhaps read more as unbuilt projects than as speculations. Speculation presupposes a project based in experiment and conjecture, not fact and investigation. Both the corporate offices of Hassell and BVN and the smaller experimental studios of Point Supreme and Kokkugia are operating from within the same agenda of site investigation and place making. As one scans across the projects, it is not easy to distinguish either type of practice from the other. This inclusive spectrum of firms makes more apparent the question of where it is that we may find a speculative Australian architecture. Is there room in Australian architecture for speculation that extends beyond narratives of place?

In a United Kingdom context of recession chic, when all of the current discussion is about the possibilities of not building, it is intriguing to see an exhibition from a place with such unrelenting growth that chooses to focus on unbuilt work. In a country that is still building, are there opportunities for projecting our identity through speculative experiments in built works? The possibility for projecting an alternate discourse of speculating through making is an engaging one. From this exhibition in London, we see our home looming large behind us, reversed in the rear-view mirror. Emoh Ruo is committed to presenting Australian architecture as a global traveller. The spirit of the Australian road trip, however, is not just the spirit of place. As with the speculative project, the road trip promises the unknown as it privileges risk and bold new experiences. What this international showcase does do is something Australian architecture should be doing much more often – packing the bags, filling up the tank, laying down the rubber road and heading out there. But perhaps we can be much more adventurous about what we do along the way. 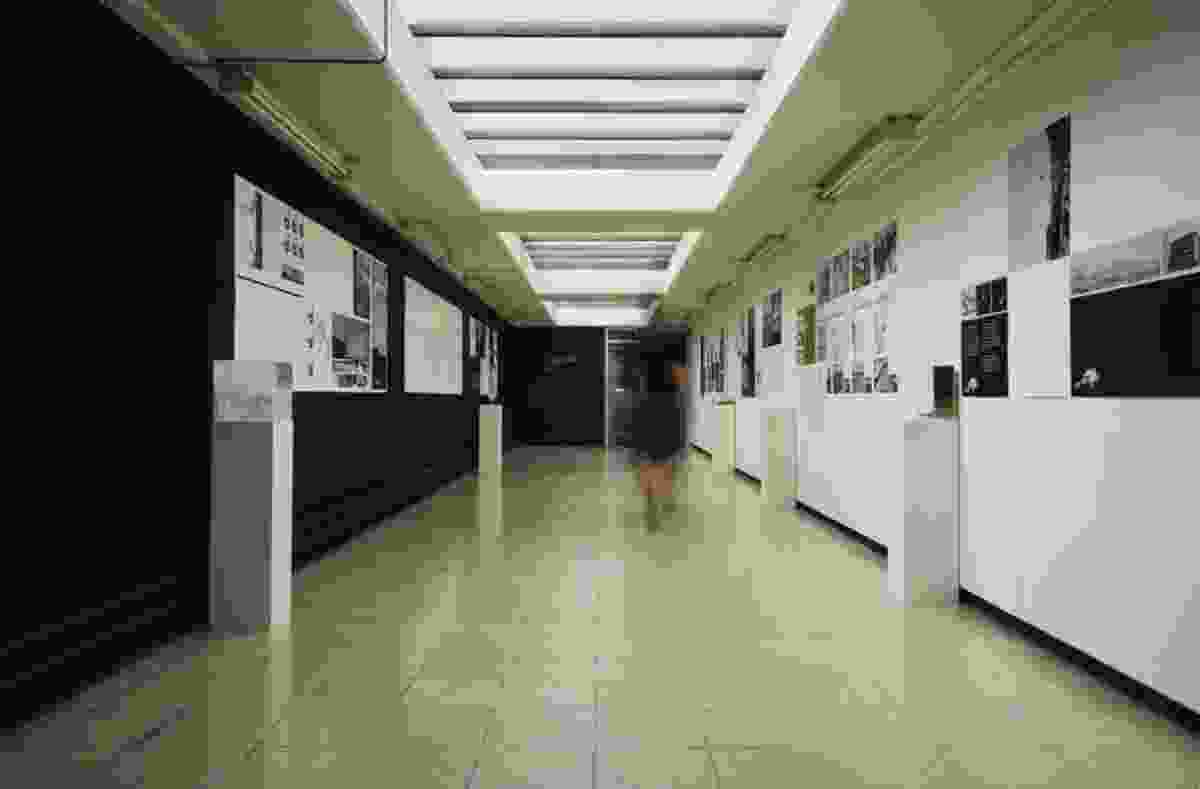 The exhibition as installed at the University of Westminster’s Bridge Gallery. 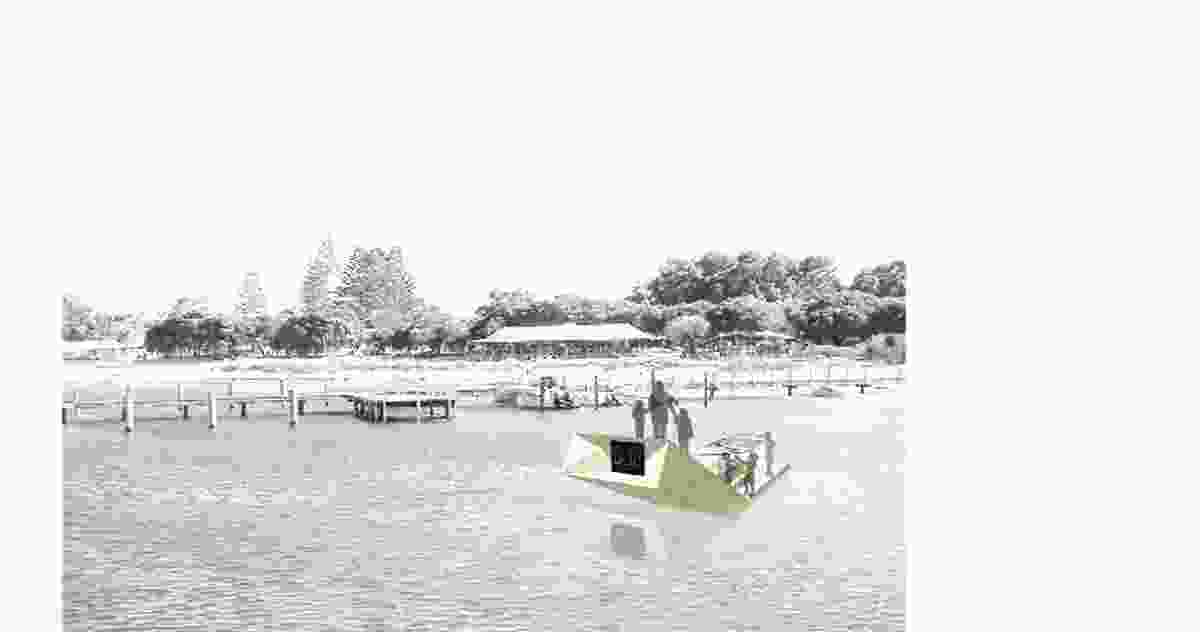 Charting Wadjemup by Hassell. “Time Karst: place, memory and transmutation in the landscape – interventions in time and place on Rottnest Island, Western Australia.” 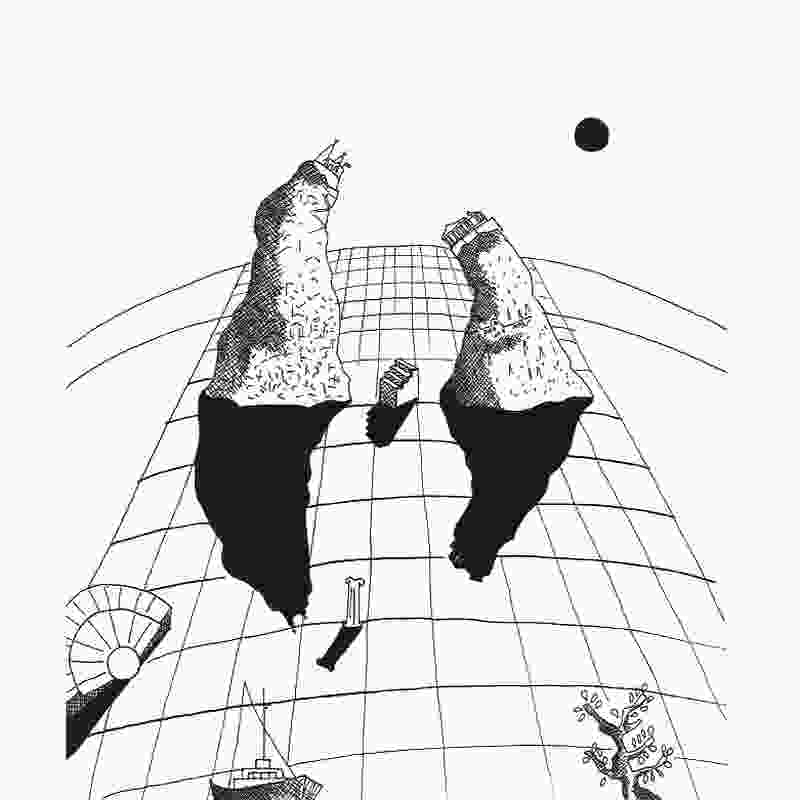 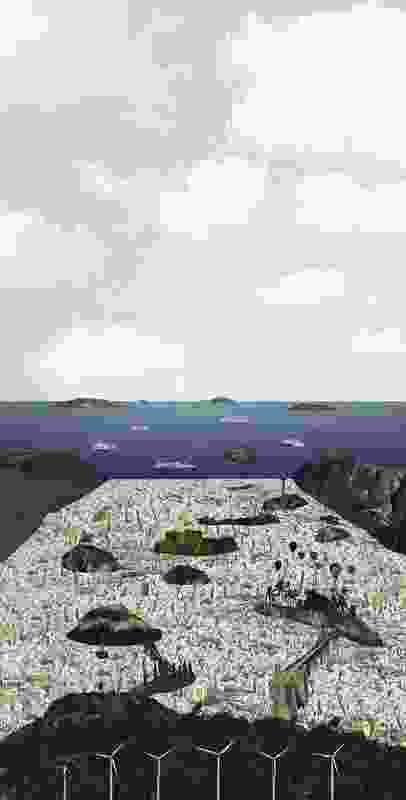 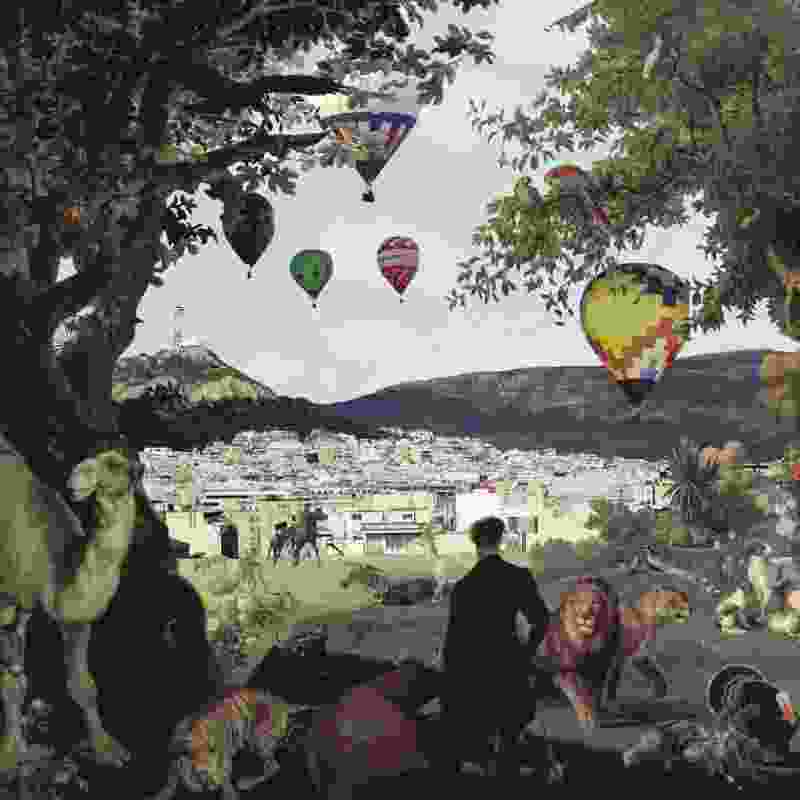 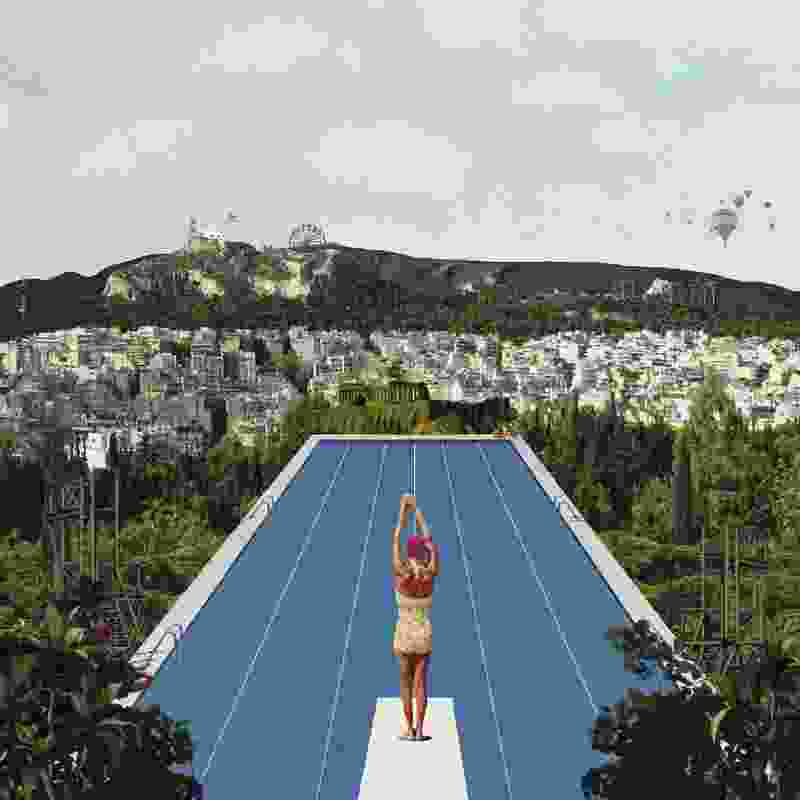 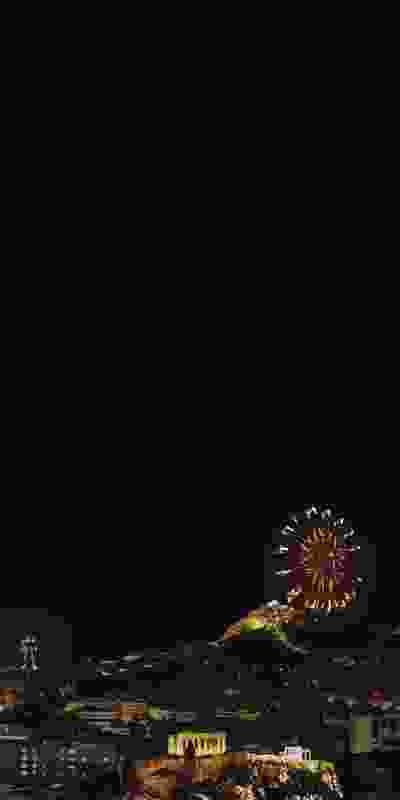 Lycabettus Hill by night, from Athens by Hills by Point Supreme.

The Other Harbour, by BVN Architecture. “Home to Sydney’s airport and primary shipping port, Botany Bay has long been the city’s true arrival locus. 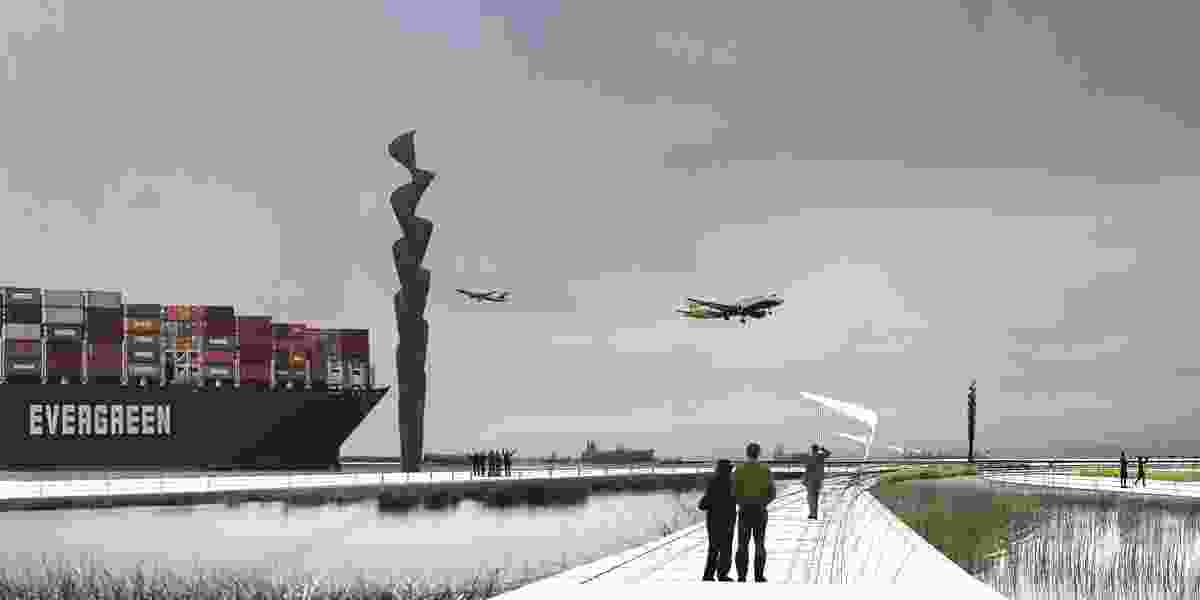 The Other Harbour, by BVN Architecture. “Home to Sydney’s airport and primary shipping port, Botany Bay has long been the city’s true arrival locus. 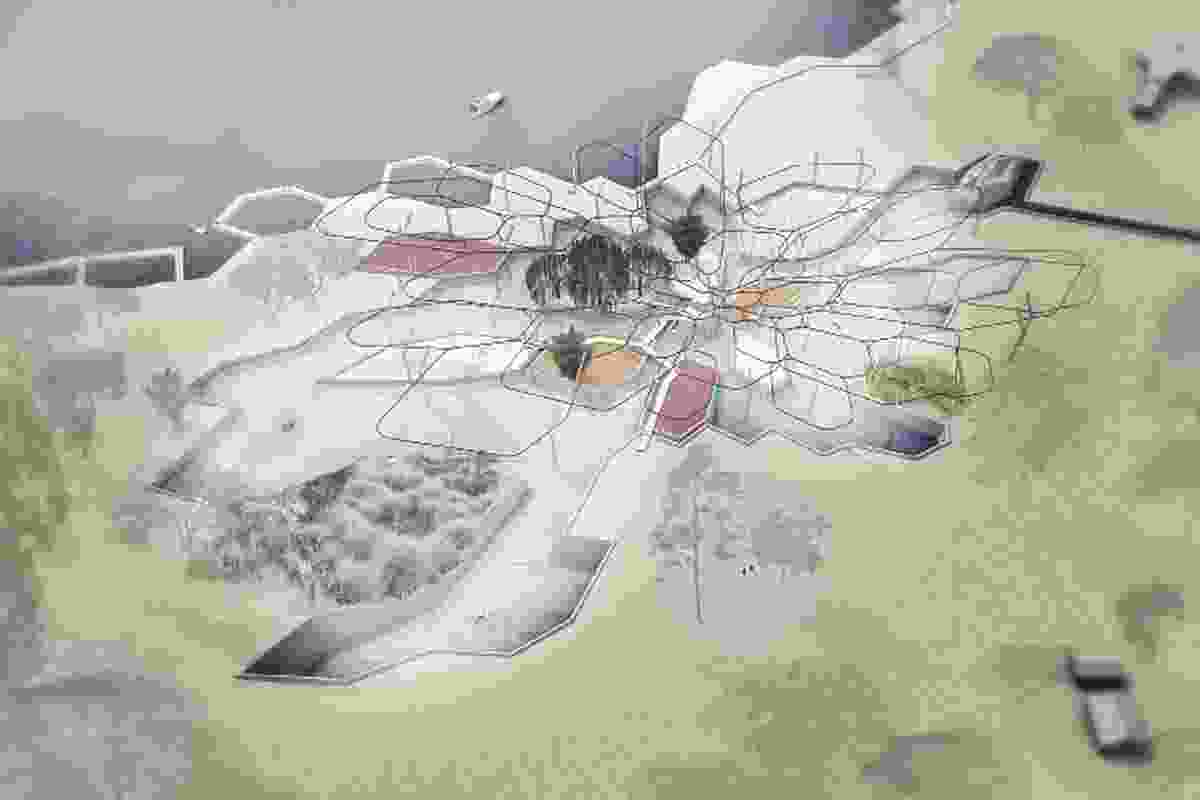 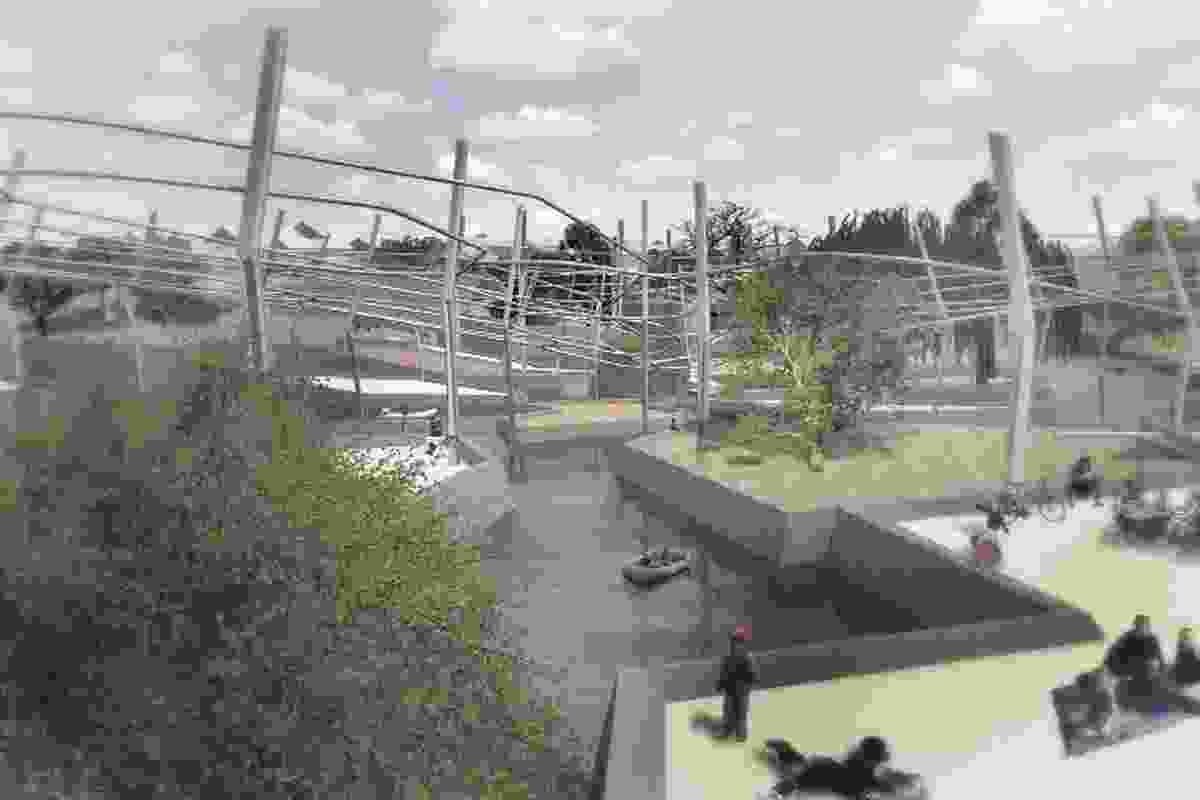 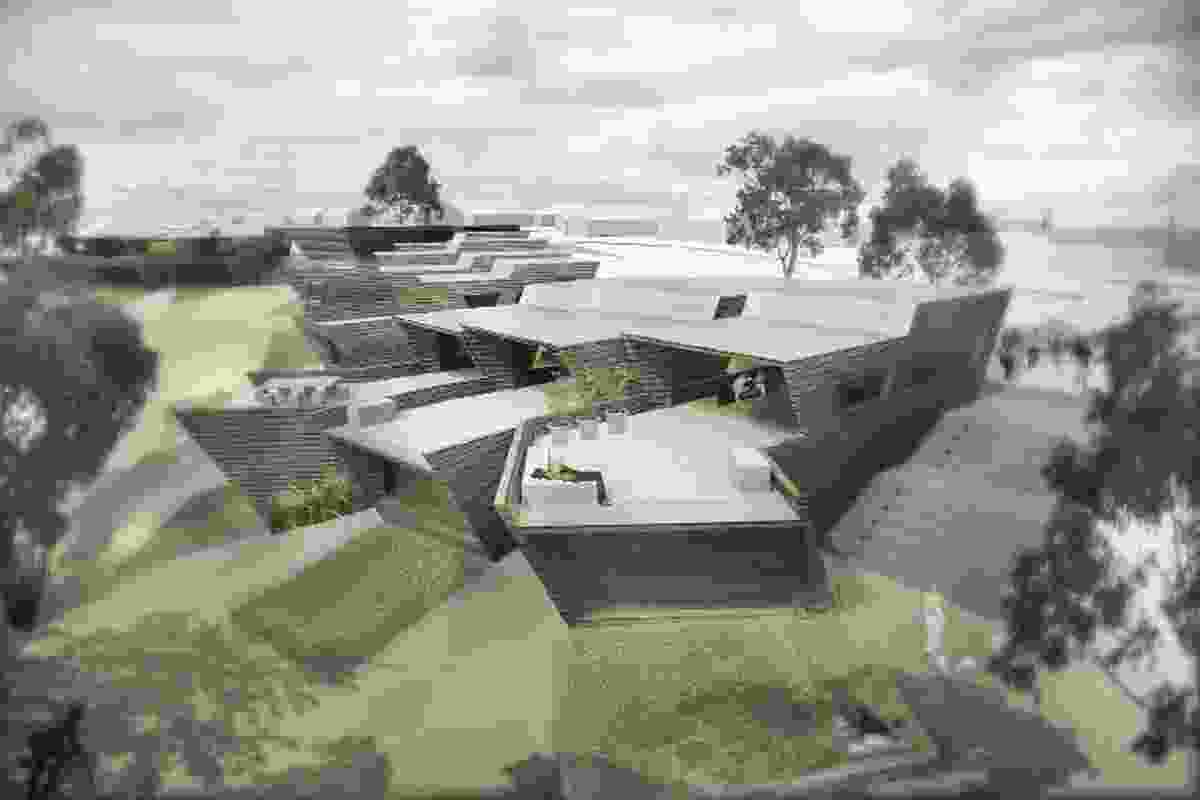 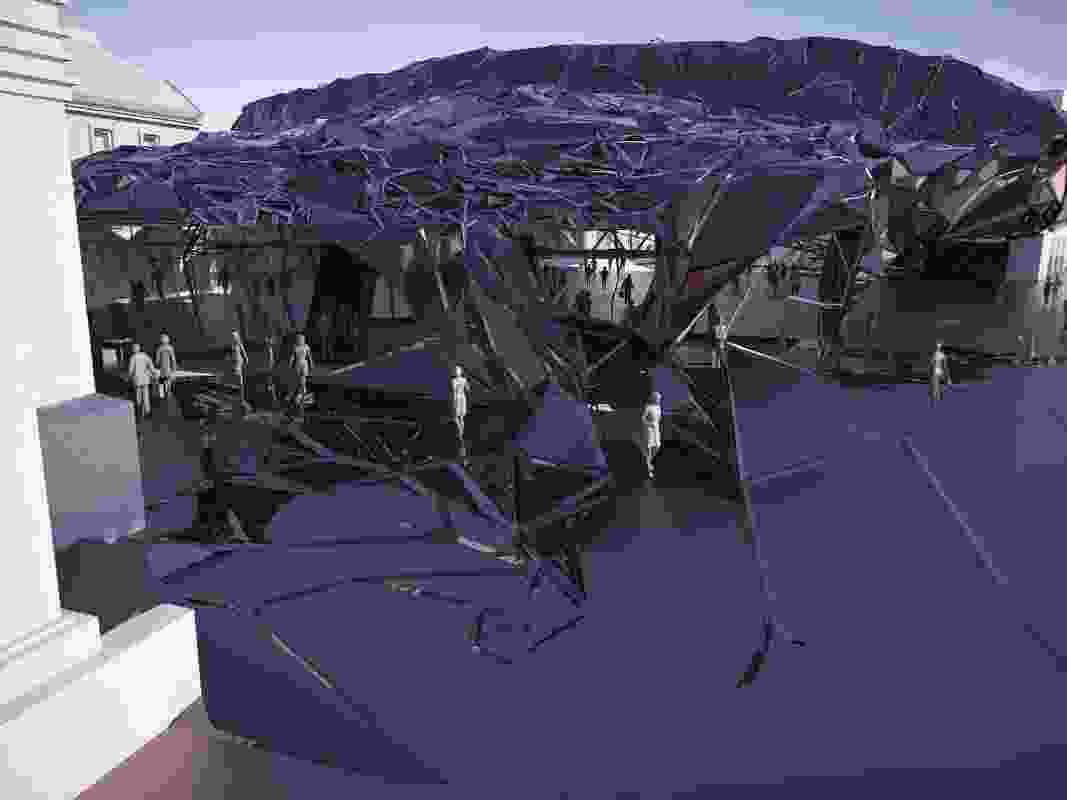 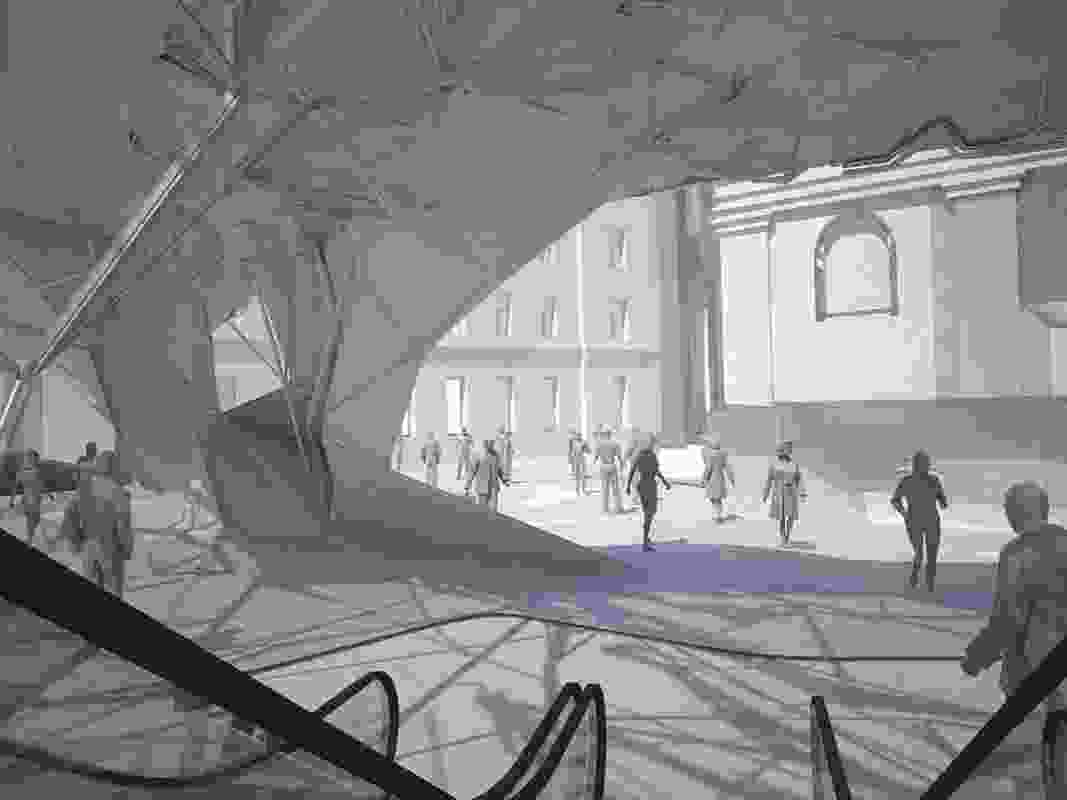 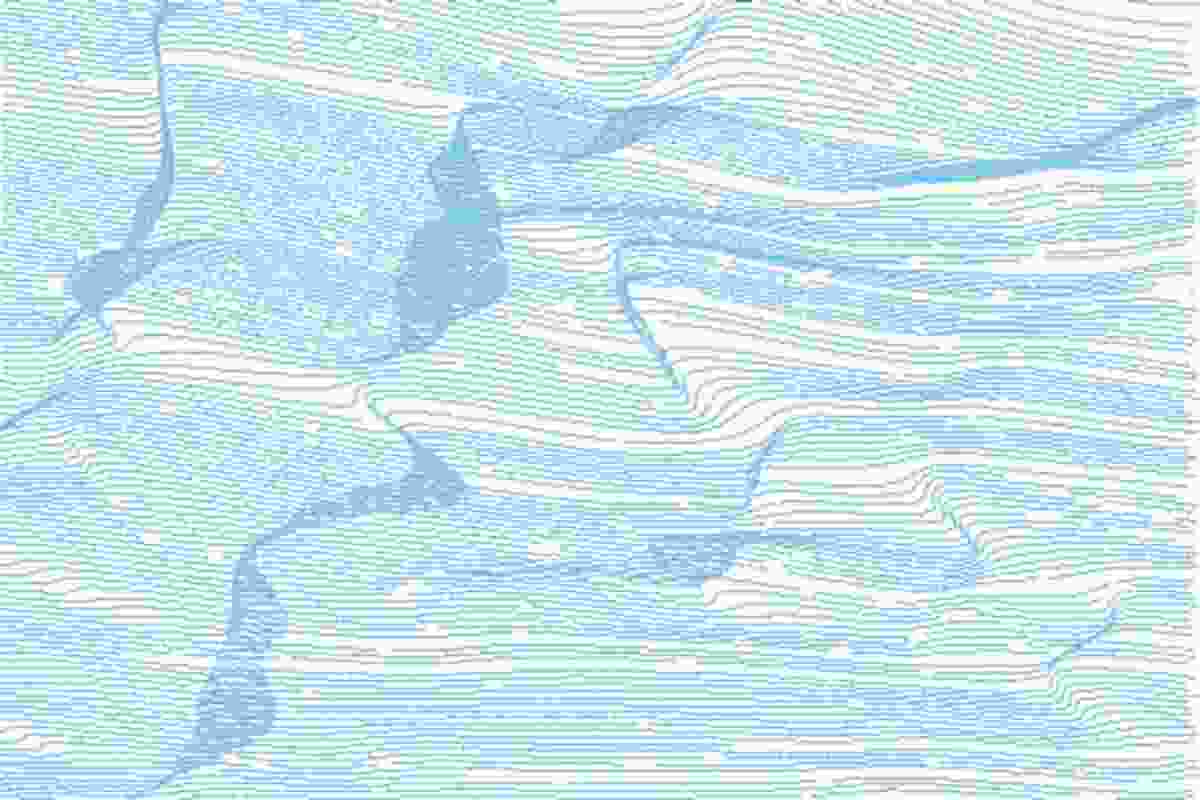 All is Not as it Seems by McGregor Coxall. “The Micronesian islands and their communities are impacted by a rise in sea levels. Shown here in the topographical lines of their islands.”