Emporium Melbourne is in some ways a model of classic retail planning, but in other ways it turns this model on its head.

Emporium Melbourne is the long-awaited infill piece in Melbourne’s Golden Mile, the stretch of retail properties extending from La Trobe Street all the way down the hill to Flinders Street. The opening of the new centre makes it possible, for the first time, to walk from La Trobe Street’s Melbourne Central shopping centre down to Bourke Street Mall without your feet touching the ground.

Since planning commenced in 2008, CFS Retail Property Trust Group, the owner of Emporium Melbourne, has been on a quest to introduce something unique to the city, at least in retail-planning terms. Perhaps tellingly, CFS Retail Property Trust Group’s regional development manager Daryl Stubbings explains that at the genesis of the project, the most important aspect of the vision was that Emporium Melbourne must not be, under any circumstances, a suburban shopping mall.

This simple aspiration created the framework for decision-making throughout the project’s life, and has influenced everything from the choice of materials and the structure of the retail plan to the selection of retailers. It also sets Emporium Melbourne apart from much of CFS’s retail portfolio, and both designers and operators aspired to achieve something “uniquely Melbourne.”

To understand Emporium Melbourne, you need to consider its organizational “bones.” In some ways, the centre is a model of classic retail planning and in other ways, it turns that model on its head. Stubbings explained to me that three ideas underpin the planning of the centre: a clear and consistent retail plan, highly visible and consistent location of vertical circulation, and the ability to see as much retail frontage as possible from any given viewpoint.

The retail plan is clearly expressed. The Lonsdale Street frontage is taken up by the “larger box” anchor retail tenancies, including Nespresso, Uniqlo, Superglue and Topshop Topman. Three of these four tenancies are set over multiple levels (Nespresso is the exception), and each of those contains in-store vertical circulation. With the street frontage of the whole centre anchored in this way, outward-looking, the centre itself behind the frontage is structured around a standard “racetrack” loop, with vertical circulation visible in the same spot on every level.

So far, business as usual – but then we get to the food court. In an inversion of the typical logic of the suburban mall, food at Emporium Melbourne has been elevated, both figuratively and literally. The concentration of food vendors is located at the top level of the centre and is broken up into a sinuously flowing sequence of spaces, quite unlike the standard “eateries at the edge, seats in the middle” layout. The interior design of the food court, by Melbourne team Russell & George, is theatrical and flamboyant, culminating in a veritable cathedral of eating – a twenty-four-metre- high, column-free glazed space in the north-east corner of the centre.

With regards to the vertical circulation and the requirement to see as much retail frontage as possible from any given vantage point, the design moves were direct and relied on the geometry of the plan and the section. Escalators are positioned at the same spot on each level – near the centre of the plan – while the lifts are at the north-eastern and south-western edges. As a result of careful planning, a shopper standing on any floor, leaning up against the voids that cut through the centre, can clearly see three levels of branded shop frontage – one floor above and one floor below, as well as the floor that they are on. This view-line requirement dictated the depth of the circulation paths around voids, and the position of balustrades, on all levels.

The initial concept for the look and feel of Emporium Melbourne, the flesh that hangs off the reasonably straightforward bones, was formulated by Tokyo-based studio Wonderwall, which was selected after an expansive international talent search. The concept, incorporating the spatial functionality and planning, included a detailed specification for finishes and materials. The challenge of realizing the project through to the completion of construction was then undertaken by The Buchan Group.

The Buchan Group’s task was one of creative interpretation – the key was to stay true to the initial concept, while solving the myriad technical, practical and logistical issues, and delivering the finished centre on time and on budget. This was euphemistically referred to as “base building,” but in fact the firm’s responsibility went beyond what we usually understand by that term. The firm took great pains over four years to ensure that the initial concept was interpreted with fidelity; it even went to the lengths of sending a team member to a quarry in Italy to establish and guarantee the specification of the travertine that is used extensively throughout the centre. The result is a piece of architecture that is true to the Wonderwall concept and yet has been translated beyond that initial concept to meet the specific requirements of construction and delivery in Melbourne.

Finally, the client was insistent that the new Emporium Melbourne would be outward-looking, “stitched into” its context, and thus anchored in place. The design team has worked to ensure that this is so by engaging with the original window openings from the retained facades, and running internal spaces right up to the original skin of those building shells. Lonsdale Street is also directly addressed by signature tenants, thus activating all the centre’s street frontages.

Given the client and design teams’ aspirations for the project, the question of whether Emporium Melbourne is “Melbourne” enough might be worth considering. To answer this thorny question, I would simply say that time will tell. It’s certainly off to an interesting start.

Kerstin Thompson Architects creates a calm and restrained store for Aesop at Emporium Melbourne, with extensive use of spotted gum timber.

Responding to the impact of online shopping, design practice Ha has conceived the Autonomy store at Emporium Melbourne as a demountable “kit” that can be relocated and reappropriated.

Other
Mosaic in cafe court by Studio Brave. 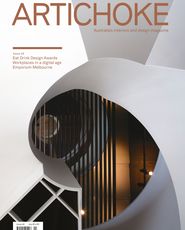 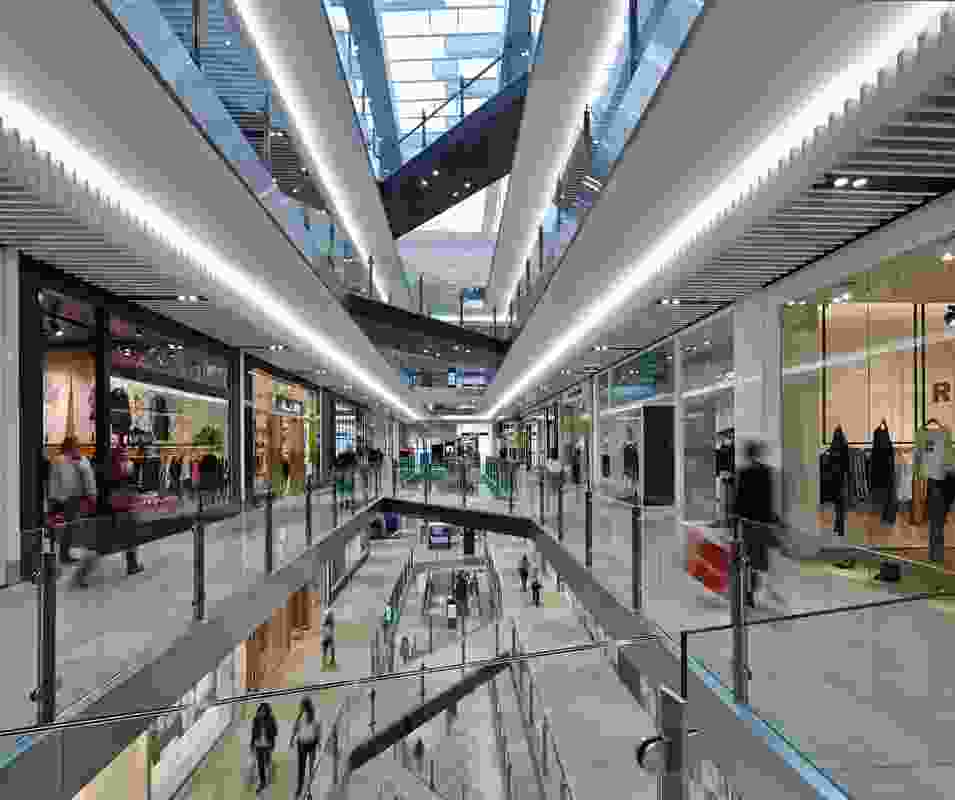 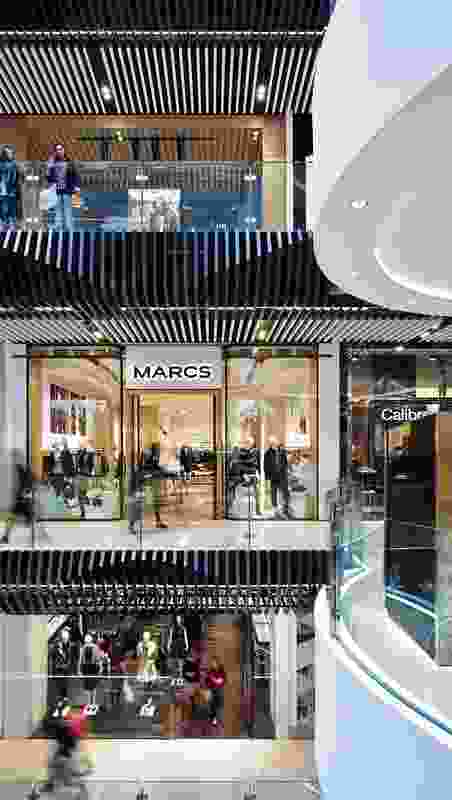 Shoppers standing on any floor can clearly see three levels of shop frontage. 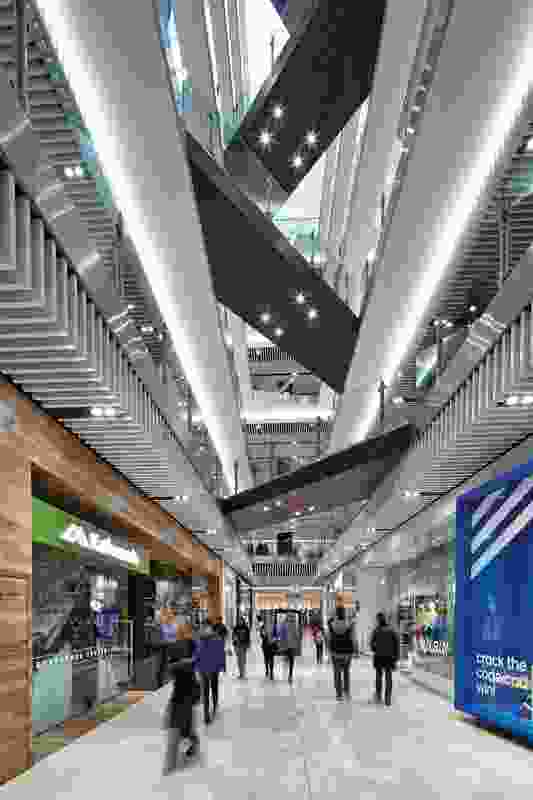 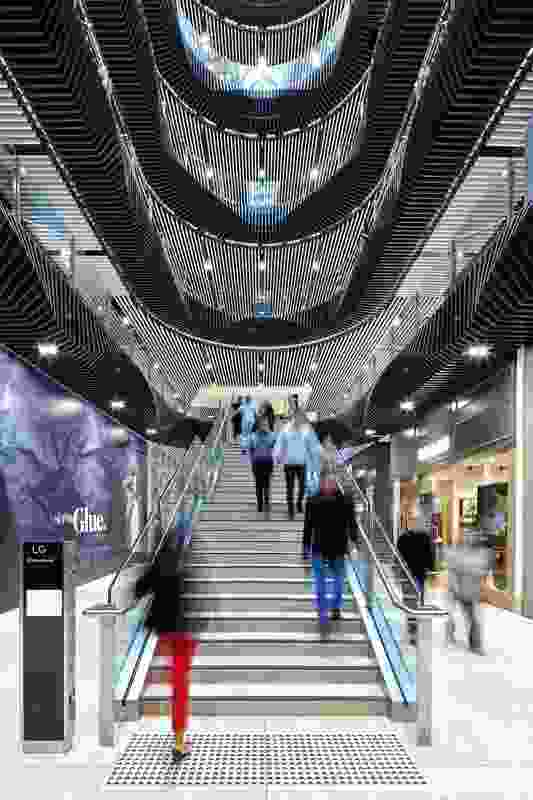 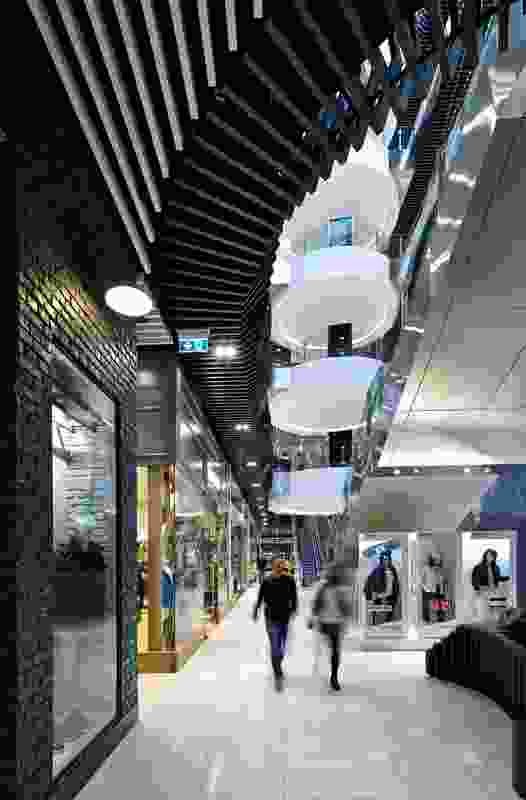 Large volumes help natural light into the centre, even to the lower ground level. 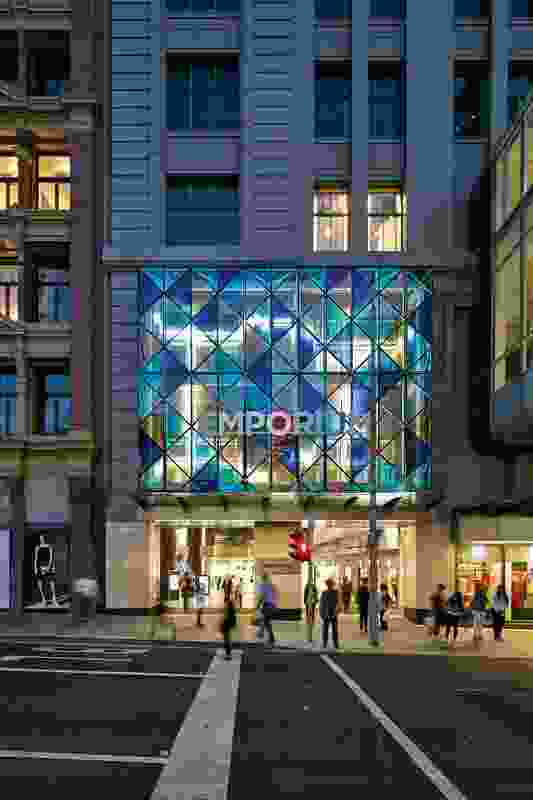 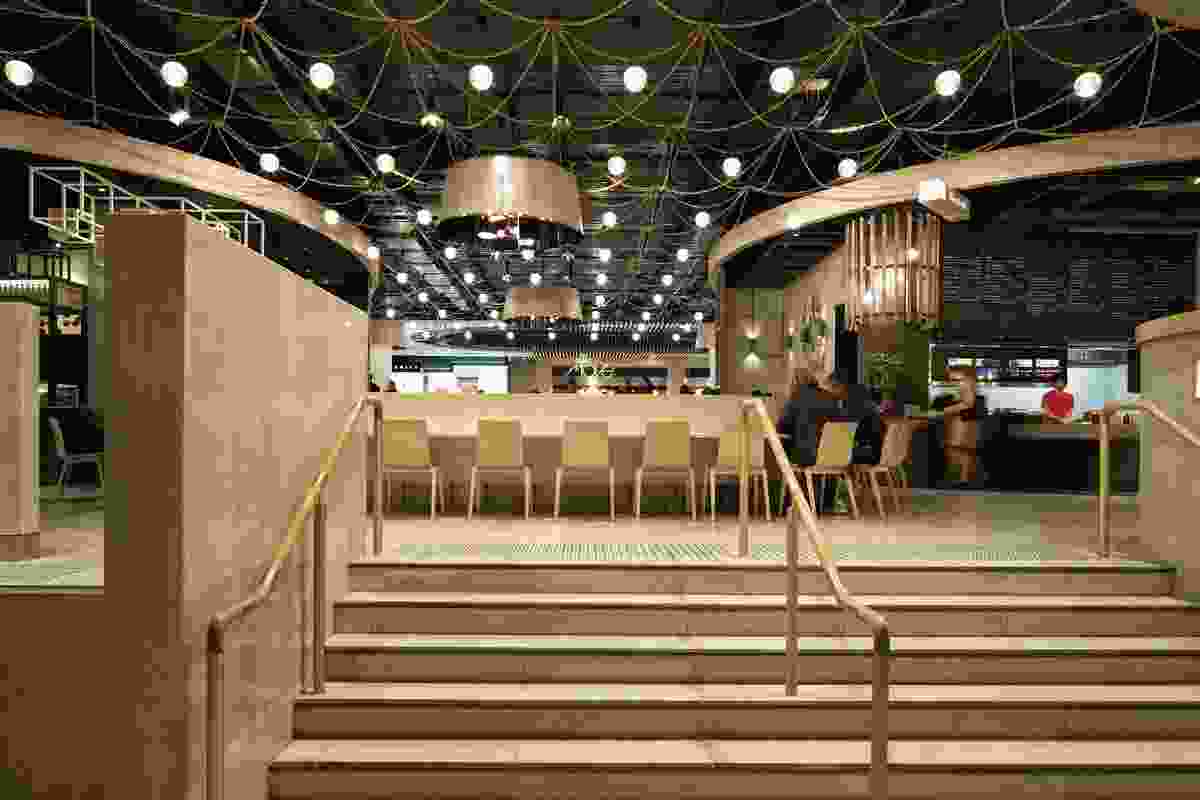 Designed by Russell & George, the cafe court is located on level three to draw visitors upwards through the centre. 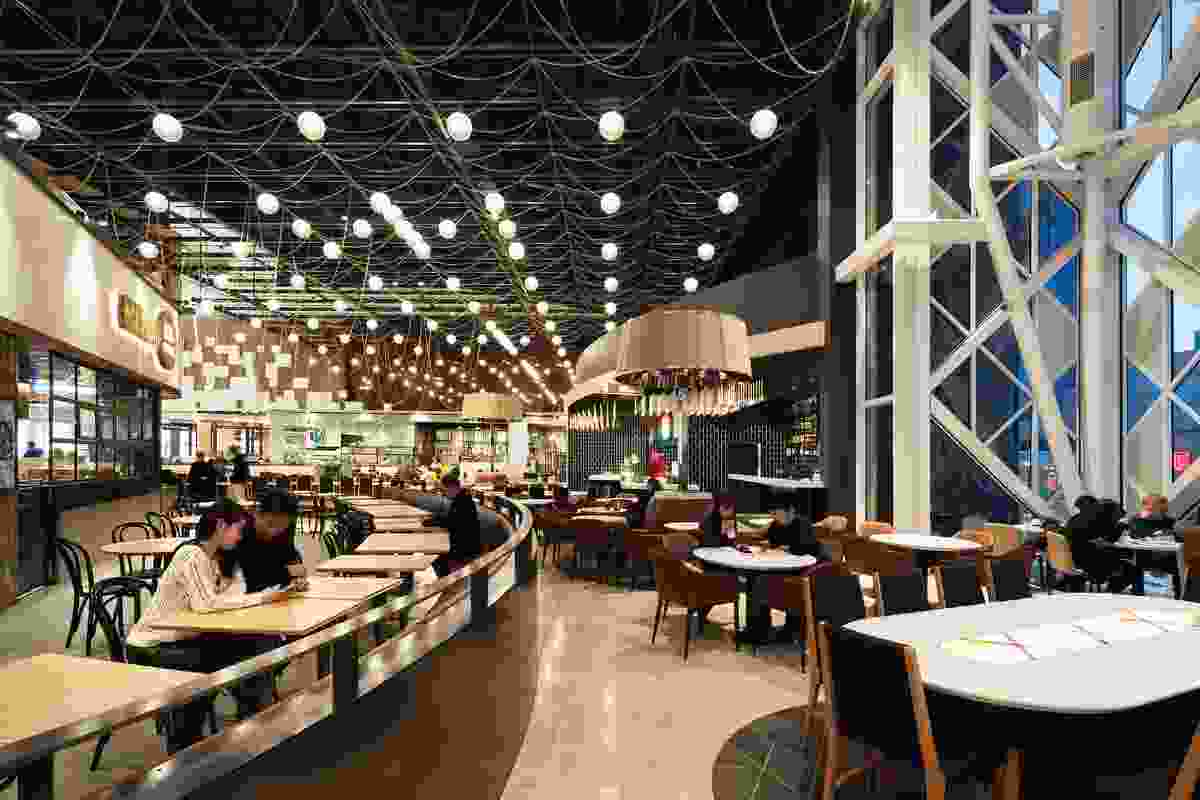 The theatrical cafe court is broken up into a sinuously flowing sequence of spaces. 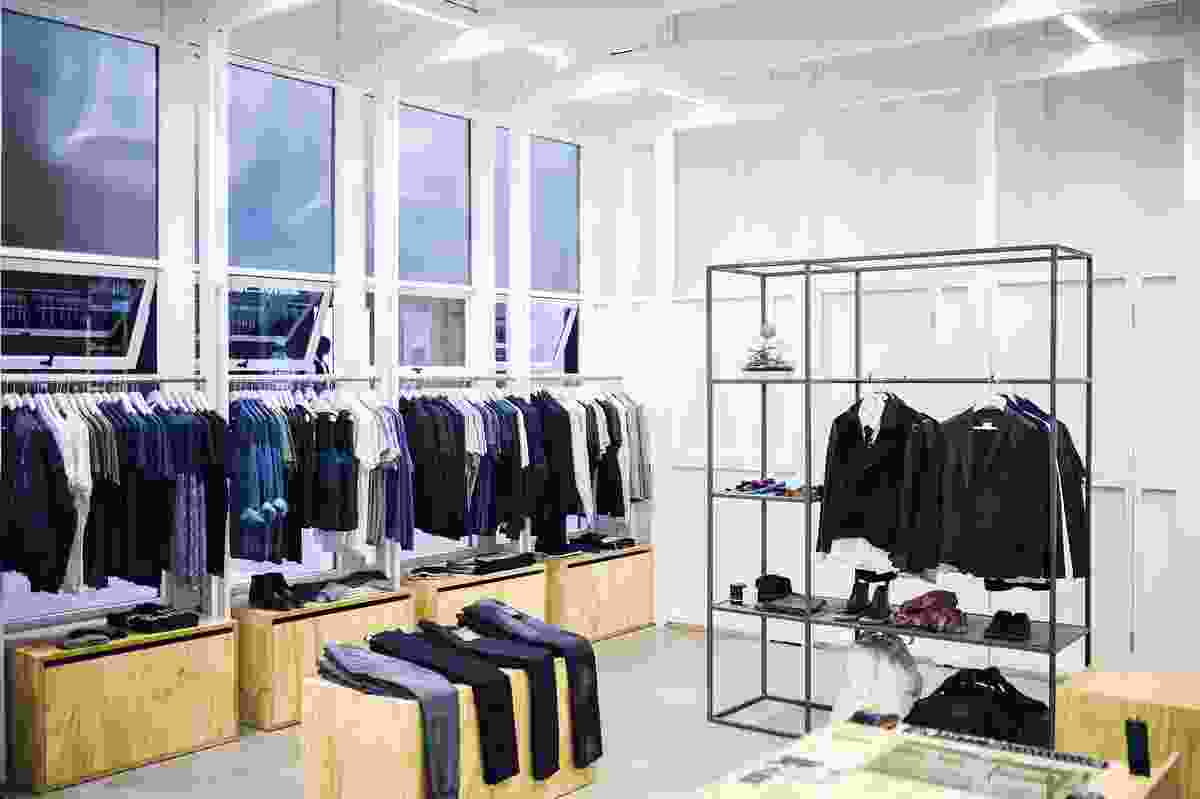 Autonomy at Emporium Melbourne by Ha.