A collegiate dinner and a new book celebrate the work of the 2006 Gold Medallist, Kerry Hill, an architect comfortable with the idea of tradition.

Contemporary architectural culture views the idea of tradition through a lens of thinly veiled scepticism, so it is an arresting experience to immerse oneself in Crafting Modernism, an architectural monograph that diligently tracks the engagement with the traditions of place, culture, making and architecture that underpin the work and practice of Kerry Hill Architects. Indeed, so cynical has culture become that the title of this monograph, Crafting Modernism, will be a provocation to the pervasive intellectual unease that greets the slow, patient “discipline” of architecture, and instead favours the frenzied pace of relentless “innovation” and the associated slide towards generalism.

In March 2012, Kerry Hill was a subject of one of Dedece’s exceedingly generous series of Vola Celebrates dinners. The intention of the dinners is to provide a dignified yet casual setting where the work of distinguished architects can be celebrated among their peers. The idea is that over the course of a fine degustation meal the event will transform itself into a forum for architects to talk candidly among themselves. The intent and execution are superb. “Casual” is not really an apt description of such a refined setting and the list of architectural luminaries present at the Kerry Hill dinner, yet the atmosphere was charged with mutual respect, generosity and collegiality, and between courses gently drew a compelling narrative from the softly spoken, unassuming Hill.

Much of this narrative is related in the new monograph. Geoffrey London’s fine essay, “The Nature of a Practice,” is a slow and patient telling of a practice’s history, and is a refreshingly forensic account for a book of this type. In being so, it offers a more generous and recognizable description of the development of an architectural oeuvre than the neat, post-rationalized precis typically proffered. Through London we hear of the seminal influence of place, Hill’s intense curiosity for Asian cultures – Bali, Singapore, Japan and Sri Lanka – and the formative encounters and friendships with Geoffrey Bawa and Peter and Carole Muller. It charts his course from green site architect of the Hyatt Hotel in Bali for Palmer and Turner (now P&T Group) through to his first commission for Adrian Zecha (later founder of Aman Resorts) in 1979, and documents the evolution of the large and consistent body of resort work through which Hill and his practice gradually made their path between craft, tradition and modernism.

The consistency of effort and precision of thought – or what Hill might call “exactitude” – involved is laid bare by the methodical, chronological arrangement of projects in the monograph. Each is located, described and documented through succinct plan and section drawings, with Hill’s taut, blue pencil sketches suggesting a tantalizing proximity between conception and execution that belies the painstaking toil in between. Through this rigorous representation, the shifts in the studio’s work are manifest as a gradual evolution over many projects, both realized and unrealized.

Hill’s engagement with the traditions of both modernist and ancient architectures is central to the spatial and material potency of the work. “The future is only the past again, entered through another gate.”

Hill’s engagement with the traditions of both modernist and ancient architectures is central to the spatial and material potency of the work. The extraordinarily nuanced series of relationships between interior and exterior space explored in the Amanusa, the Datai, the Serai, ITC Sonar, Desert Palm, the Lalu and Amankora resort projects display moments of solidarity with the modernist traditions of Kahn, Wright and Muller, but also the experiential, climatic and cultural lineage of India, China, Bali and Bhutan as well as the rich South-East Asian colonial architectures.

These explorations moved seamlessly with the practice into broader types of commercial and public building. “The future is only the past again, entered through another gate,” notes Hill. The effortless clarity of Genesis in Singapore, the Ooi and Oglivie Houses, and the Soi 53 Apartments in Bangkok display the same connection and invention with the practice’s traditional touchstones. In his essay for the monograph, Erwin Viray is tasked with evoking the experiential richness and material intensity of this work. A seemingly impossible task at any time, but particularly so within a climate that is dismissive of “soft” architectural writing limited to description. Viray’s essay displays all of the dangers implicit in that form, but nonetheless allows a broader sensual awareness to infiltrate the sublime photographic clarity of the book. Given the importance of the experiential aspects of Hill’s work, to evade the task would have been a greater failing.

The Dedece dinner offered Hill a chance to contrast his experience of life and work in South-East Asia with his experience of the same in Australia. The importance of international competitions as a way of earning commissions sparked an open discussion about the advantages and pitfalls of the competition process in both contexts. All were in agreement about the need for competitions awarded on the basis of merit, rather than track record. Hill’s reflections upon the nature of Australian and Asian cities were particularly sharp. He noted Singapore’s transformation from a small place to a dynamic, cosmopolitan city in the space of forty years. The contrast with Australian cities, despite their recent mining booms, could not be more stark. Hill ruminated upon the impact of the ease of lifestyle on the nature of Australian cities, and their remnant parochialism. Australian cities seek “international” status through commercial redevelopment, while ignoring the more basic and fundamental vitality of daily, lived experience. It is that vitality that supports urban culture and defines a “real” world city, and it is that vitality that sees Hill remain firmly ensconced in South-East Asia.

If the title and ethos of this new monograph set a few churlish architectural eyes rolling skywards, so be it. It is too easy to dismiss any positivity in architectural culture and discourse as sycophancy and hagiography. Architecture, as a discipline, is under extraordinary pressure. Events like Dedece’s Vola Celebrates series, monographs like Constructing Modernism, and the awarding of the Institute’s Gold Medal and reflection on the work of Gold Medallists are important opportunities for professional reflection and enrichment. They are the way we form, inflect and articulate our contemporary architectural tradition. T. S. Eliot’s 1919 essay “Tradition and the Individual Talent” argued that tradition is precisely the mechanism through which an artist can be most acutely conscious of their own contemporaneity. Kerry Hill’s astute understanding and respect for enduring architectural culture is entirely consistent with this spirit, reminding us of exactly what Eliot meant when he told us that tradition is a revelation “not of what is dead, but of what is already living.” 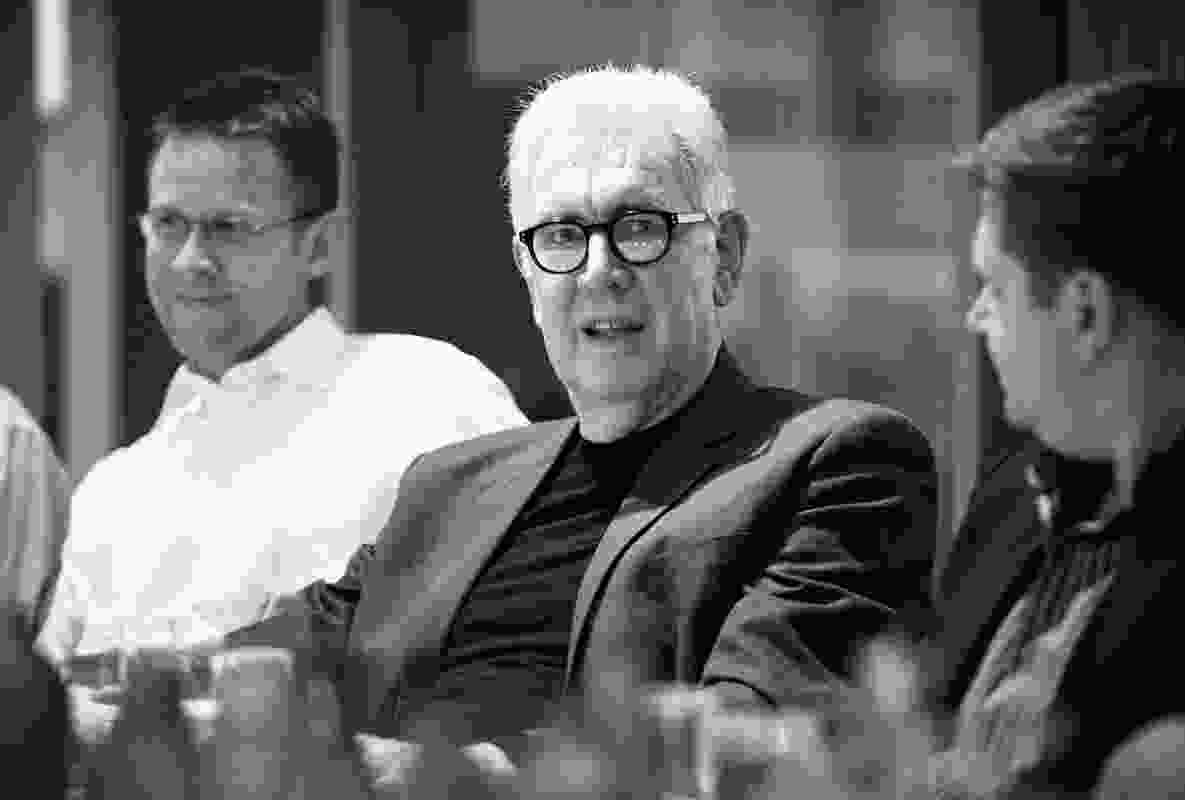