Extending the National Gallery of Australia

The understated extension by PTW to the National Gallery of Australia challenges the audacity of Edwards Madigan Torzillo and Briggs’ ambitious original design. This review by Laura Harding for Architecture Australia.

A view east in the foyer of the new extension to the NGA.

In a review of the National Gallery of Australia (NGA), coinciding with its opening in 1982, Terence Measham reflected on the great challenge posed by the design of a national institution – that of its aesthetic and intellectual resilience over time. He said, “The process of evolution, the process by which we reach into the future, is thrilling and chancy. Risks are necessary. Programmed by such an outlook, the Australian National Gallery could never be a passive statement; it could never be bland. It is, and will remain, edgy and challenging, offering to visitors an aesthetic experience which they cannot ignore.”1

Successive NGA directors have interpreted the gallery’s architectural expressiveness as an undesirable challenge to the works in its care.

In the intervening twenty-eight years, it appears that we have lost our appetite for such “necessary risk”. The relationship of the national collection to its majestic concrete reliquary has been consistently ambivalent. Successive NGA directors have interpreted the gallery’s architectural expressiveness as an undesirable challenge to the works in its care. Interior interventions attempted to blunt its force and tame its aesthetic intensity. Meanwhile, the national collection, and its requirements, continued to grow apace.

In 2000, Tonkin Zulaikha Greer (TZG) won a limited national competition for the refurbishment of the NGA. Their work involved maintenance works to the building fabric and necessary upgrades to the building’s services. They also reversed many of the destructive interventions that had compromised the original interiors, but their primary focus was the design of a new glazed entry and associated public facilities grafted onto the western corner of the building. These additions attempted to address the confusion resulting from NGA’s entries being configured in response to surrounding urban works that were never completed. They sought to draw together arrivals from the lakeside, the High Court and the King Edward Terrace frontages in the NGA’s iconic portico.

TZG’s proposal never proceeded due to a moral rights challenge launched by the original architect, Col Madigan of Edwards Madigan Torzillo and Briggs (EMTB). It isn’t possible here to untangle the multiple truths surrounding the breakdown in the consultation process that ended TZG’s commission in 2002. The salient truth is that the consultation process was presented by the media as an undignified clash of architectural egos, and essential public discussion about the architectural and cultural questions posed by the need to modify the NGA was smothered by sensationalism. From this point onwards the NGA was seen as an architectural minefield, and this was devastating, because if there is one thing that Madigan’s building will not tolerate, it is timidity of any kind.

In 2004 then director Brian Kennedy appointed Peddle Thorp and Walker (PTW) to take over the commission, which was completed under the current directorship of Ron Radford in September last year. PTW was set the task of resolving the ambiguities of the building’s entry, plus an expanded public program of new galleries dedicated to the exhibition of the NGA’s Aboriginal and Torres Strait Islander collection, new cloaking, reception and visitor facilities and a new function space for public programs and events. Technical and support areas and new loading docks are provided on the lower level. Further compliance and refurbishment works in the original building have also been undertaken.

Col Madigan was initially engaged by the NGA as a design adviser to this stage of the works, and while preliminary consultation did occur, it too was subsequently abandoned. Inevitably, this situation resonated in the evolution of the works, with new and old developing as architectural opposites.

The new gallery spaces respond to a desire by the NGA for a suite of traditional gallery rooms, rather than the circuit-based plan, elaborated through the generative triangular geometries, of the original. As such, the extension has developed as a series of orthogonal gallery spaces en enfilade. The larger galleries are suffused with natural daylight, which is mediated by a skilfully manipulated cross-section that evens the light distribution and reconciles subtle variations in the height and scale of each room calibrated to the works therein. Supplementary spotlighting illuminates the works, but the impact of passing cloud cover on the light levels in the room is a conspicuous and invigorating presence. Smooth plaster surfaces form the luminous neutral box so desired by curators. The legible composition of rooms allows for a thematic arrangement of the astonishing works in the Aboriginal and Torres Strait Islander collection. Judged in isolation, the galleries are highly successful and technically accomplished.

Yet they do not exist in isolation, but instead are locked in dissonant tension with the original work. The understatement of this new hand is challenged by the drama and audacity of the original. Madigan’s circuit is indirect and oblique. Its light is categorical and explicit, splicing into lofty rooms, spilling down concrete shafts and throwing deep shadows. Its scale is wildly elastic, interspersing intimacy and awe. Its palette is textured and raw. Thin slivers of glazing are given the task of prising these opposing forces apart – but don’t offer sufficient time for the body or the intellect to reconcile the coexistence of thesis and antithesis.

There are strong moments in PTW’s extension where it speaks synchronously with the Modernist bravura of the original work.

There are strong moments in PTW’s extension where it speaks synchronously with the Modernist bravura of the original work. The series of paired concrete blades that delimit the upper floor gallery spaces, echo Madigan’s linear axis and form a void between the new wing and the face of the original building are self-assured, and this space has an appropriate, quiet dignity. The large steel fish trap now suspended in this space casts an intricate tracery on Madigan’s watchful wall. The orienting foyer space shares a similar calm – but pulls its punches, with finishes such as fine, white marble and gilded doors feeling a little prim against the gutsier concrete palette. More significantly, the entry foyer fails to provide the necessary clear, long vista into the original foyer on the upper level – which is critical for the linking of all three entry points. Rather than resolving the NGA’s entry issues, this is likely to create a new sort of confusion in those entering from the lakeside or from the portico, who will need to move downstairs for cloaking and orientation.

Externally, the soaring verticality of the brutalist structure is paired with an addition that is half its height and where the horizontal line is prioritized in its precast panelling. While the addition gives the NGA a more clearly identifiable address from King Edward Terrace, there is a fine line between deferential and diminutive. The other key question regarding the setting of the NGA is the enchanting sculpture garden designed by Harry Howard and Barbara Buchanan. Now regarded as a landscape work of national importance, the garden was never completed. An autumn garden was intended to be formed on the site of the NGA’s temporary exhibition wing (also by PTW). As such, the new garden by McGregor Coxall is isolated. This is unfortunate, as the placement of James Turrell’s Within without skyspace in this garden feels detached, and its pyramidal geometry yearns for the cosmic triangles that underpin the Howard/Buchanan garden.

So how do we reconcile these coupled opposites? Is it that Madigan’s spirited challenge has not proved resilient over time – or have the needs and aspirations of the NGA as an institution shifted to the point where the two are irreconcilable?

In Measham’s review of the original NGA he underscored the importance of Madigan’s intellectual conception of beauty to his architecture. “His notion that beauty must be scarcely bearable is essentially eighteenth century, and ‘sublime’ is a term that can aptly be applied to the architecture …”2 This is critically important. The idea that a national institution or a work of architecture should challenge and extend us to the point where it is “scarcely bearable” seems foreign to us now. Contrast this with Ron Radford’s vision for the NGA as “more than a great place to view great art. It will be a superb place for meeting friends, enjoying a relaxing lunch, finding that special art book or gift, learning about art from around the world, conducting business, studying, enjoying a family day out or simply sitting in the gardens and soaking up the creative atmosphere.”3 Well, perhaps, but I prefer to imagine that the 13,000 new members who joined the NGA during the Masterpieces from Paris exhibition last year did so because they were inspired by the intellectual and emotional transcendence they experienced when communing with extraordinary paintings, rather than the proximity of picture books, coffee and convivial surrounds.

PTW has endeavoured to temper this tendency in its new wing, which, despite the difficulties in the manner in which it relates to the original building, still cultivates a dignified public sensibility. But it is important to acknowledge how far we have shifted. We embrace ease and eschew risk at our peril. The NGA should seize us by the throat and bring us to our knees. It must never be allowed to flatter and mollycoddle us.

Read a review of Falls the Shadow, a record of the aspirations and many difficulties behind the design of the National Gallery of Australia (NGA) in Canberra, according to its original architect, the late Col Madigan, and other critical protagonists and advocates.

Extending the National Gallery of Australia 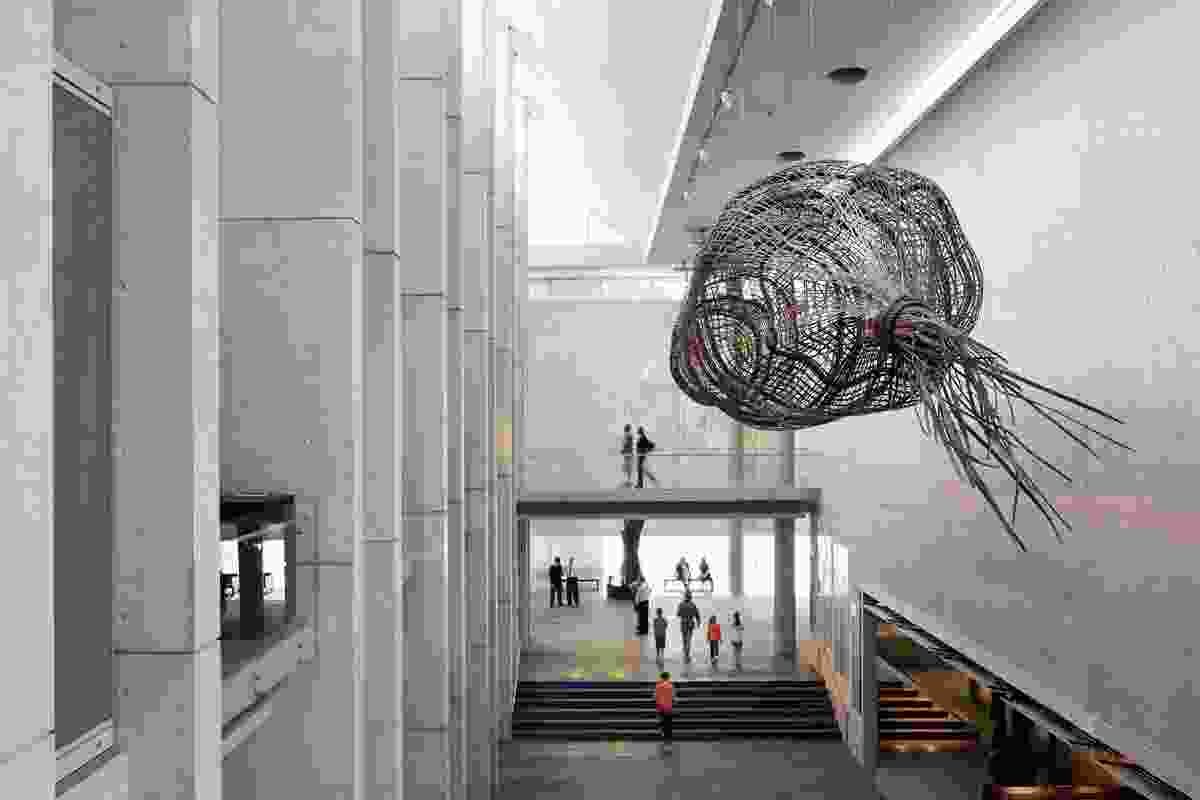 A view east in the foyer of the new extension to the NGA. 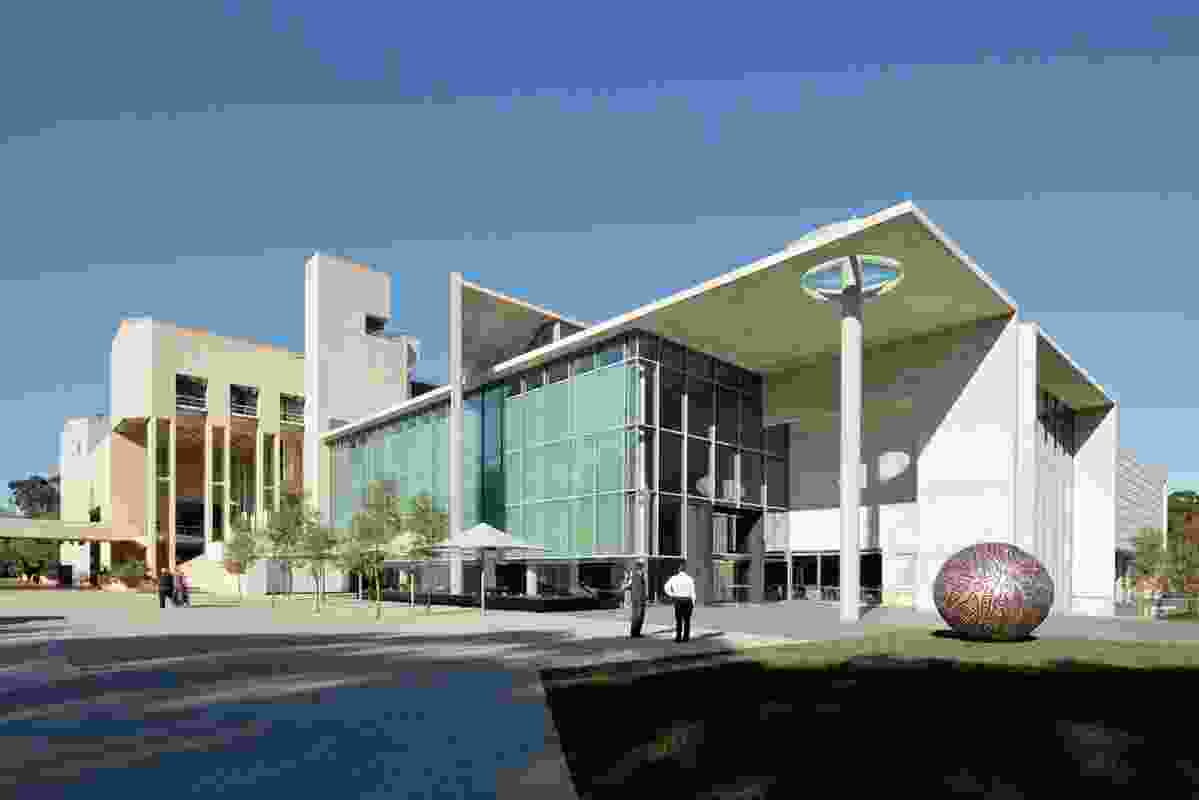 The extension forms a new entry on the south-western corner of the original building. 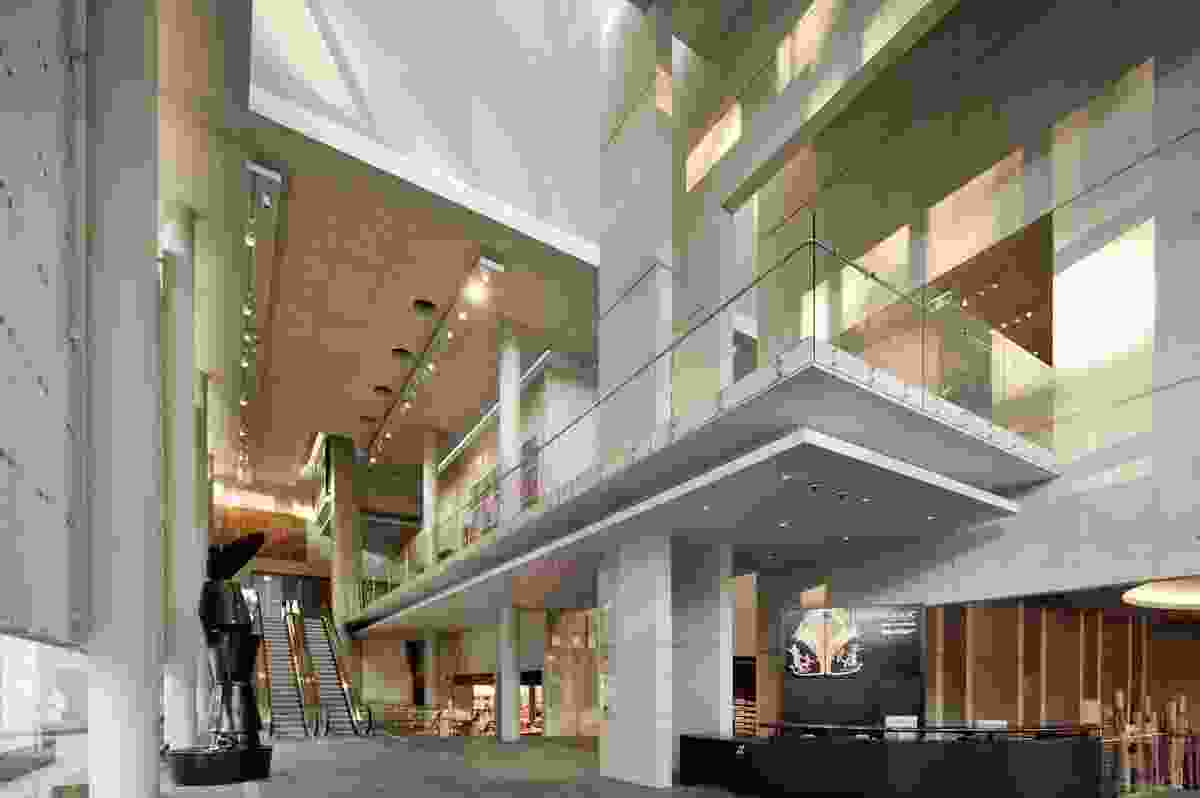 Precast concrete is the primary material internally and externally. 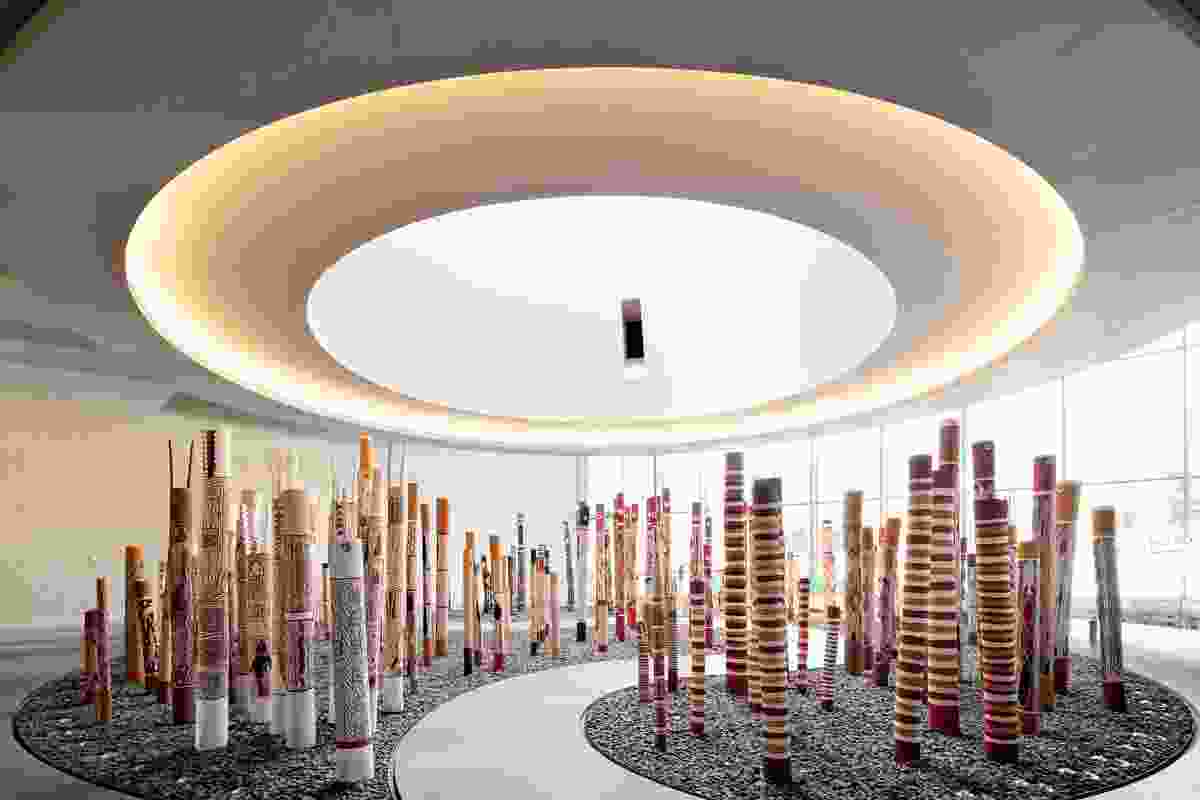 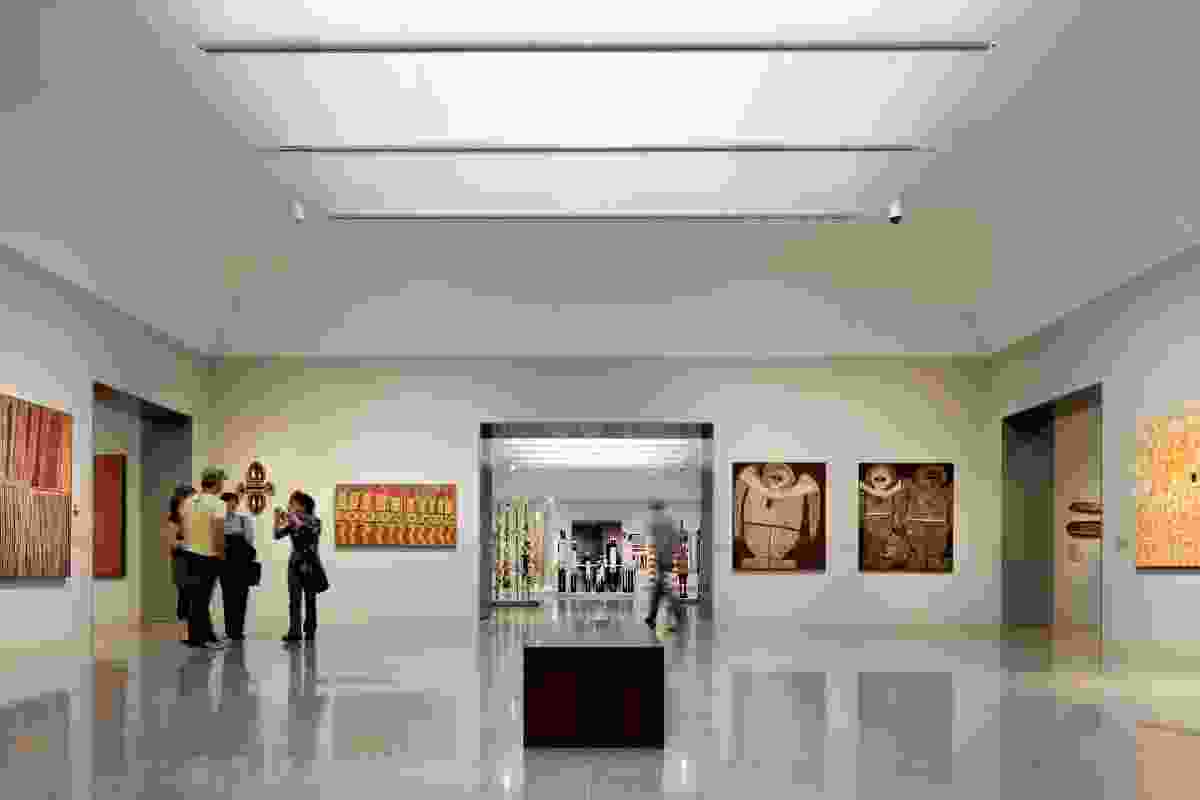 View from the Small Bark Paintings gallery into the Urban Aboriginal Art Gallery. 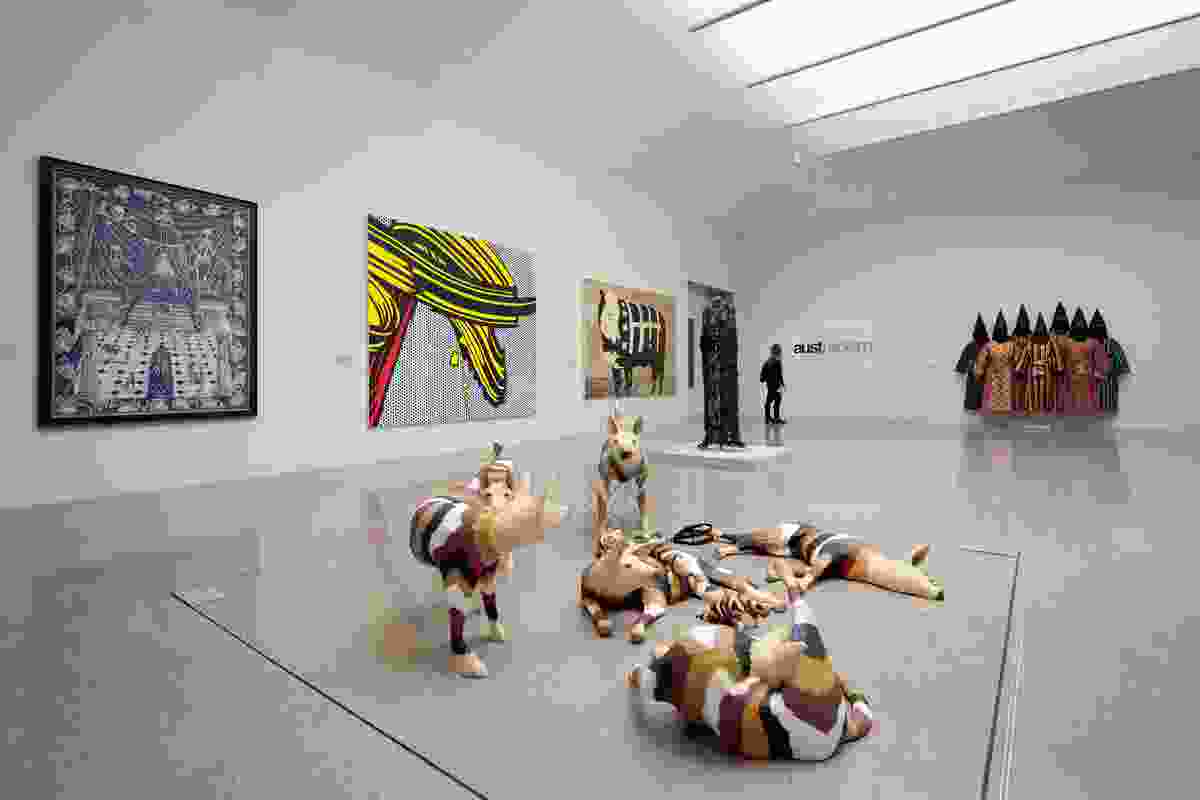 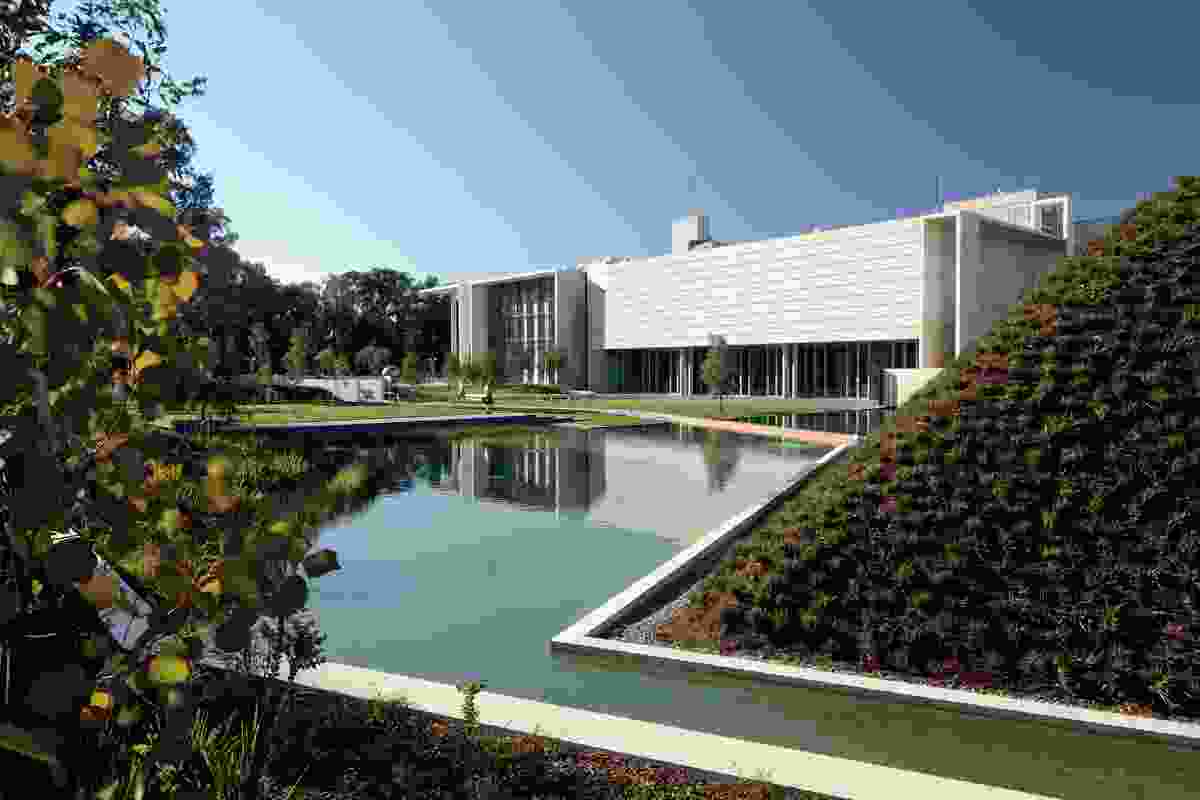 View north from the Australian Garden at the south of the gallery. 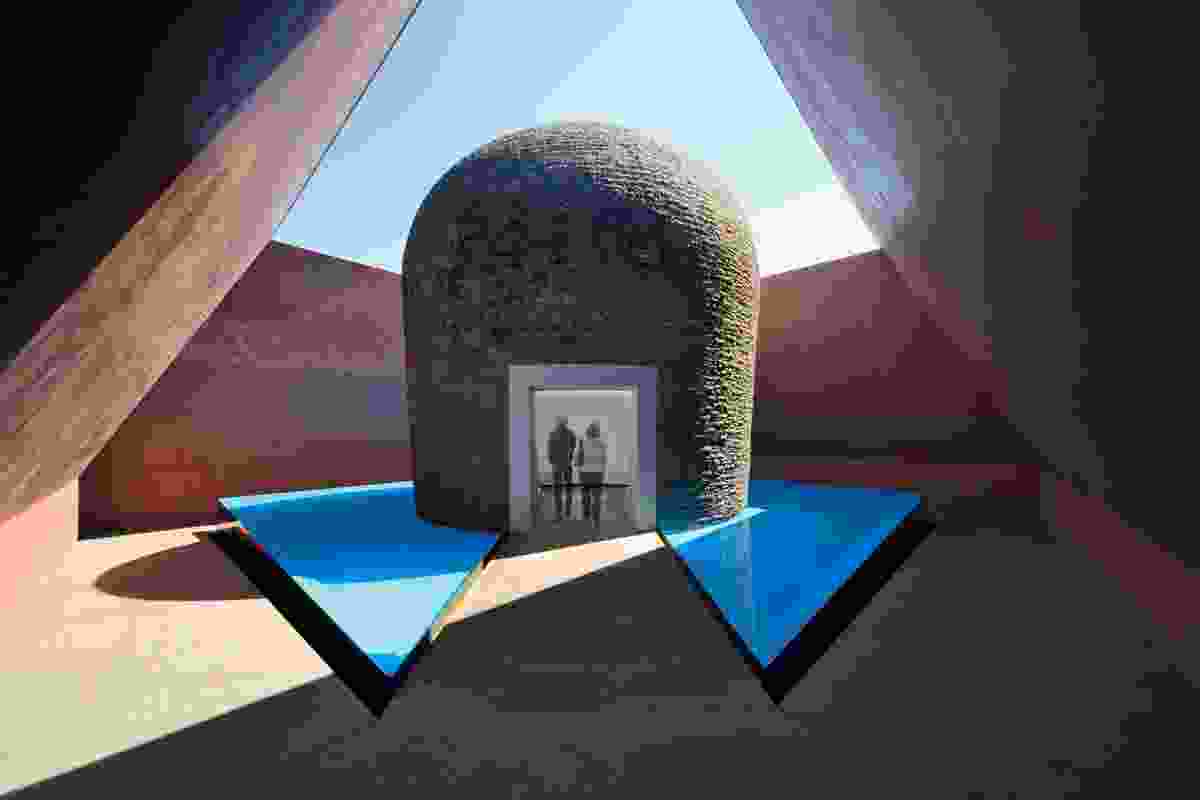