Fender Katsalidis, Cox twin towers to be among tallest in Melbourne

The $750 million project, dubbed Queens Place, is sited near the crest of Flagstaff Hill, the highest point in Melbourne, making the 270-metre, 79-storey residential towers among the tallest buildings in the city when completed.

Developer 3L Alliance ran a limited design competition for the site in which FKA and Cox Architecture submitted separate schemes. At the conclusion of the competition the developer suggested the architects combine their proposals, blending Cox Architecture’s podium design and FKA’s towers, which resulted in the practices’ collaboration on the project.

The development at 350 Queen Street is located one block south of the Queen Victoria Market, which is also slated for development. The design scheme aims to connect with this context.

“We know the market precinct is about to change quite dramatically,” said Patrick Ness, design director at Cox Architecture. “Our early thought was […] to generate a project that links in with the broader streetscape.”

Nicky Drobis, director of design at Fender Katsalidis, added, “It was really a ground plane-led solution for the site.”

The five-level podium is conceived as a three-dimensional public space, with a series of arcades and laneways that will be activated with a mixed-use program consisting of a crèche, a gym, workplaces, residential (in the form of loft apartments), retail and restaurants. “It’s like a mini-town,” Ness said.

“Rob Adams [director of city design at the City of Melbourne] talks about how the first 25 metres of a building defines exactly what it is – what kind of life can come into that space. So instead of the podium being a foyer with Prada in it, [it’s designed] as a liveable, useable, breathing thing.”

An existing 21-storey commercial office building on the site will be retained. “We’ve re-skinned it in a way that it can engage with the new streets,” Ness explained. “We’re putting new program in it so that it becomes a contributor to the public realm.

“The second thing is it’s a bit like a pebble in a stream. It forms the way that the streets and lanes moved around it.”

Above the podium levels rise two residential towers containing 1,600 apartments ranging from one- to four-bedrooms.

“These tower forms are very much of the school of sculpted buildings sheathed in a simple and sleek façade,” Drobis said. “It starts with the most efficient floor plate which is a double loaded, single corridor floor plate. And the external shaping of the façade gives us the form of the building.”

The tower forms step away from each other as they ascend towards the sky and are topped with a “lit crown.”

“It’s a screening mechanism – it serves a purpose in terms of discreetly hiding all of the plant and utility zones up on the roof,” Drobis explained. “But it acts as a marker for those two towers within the landscape.”

The project will be constructed in two stages, the first is the tower to north of the site, which will then be followed by the southern tower.

Fender Katsalidis, Cox twin towers to be among tallest in Melbourne 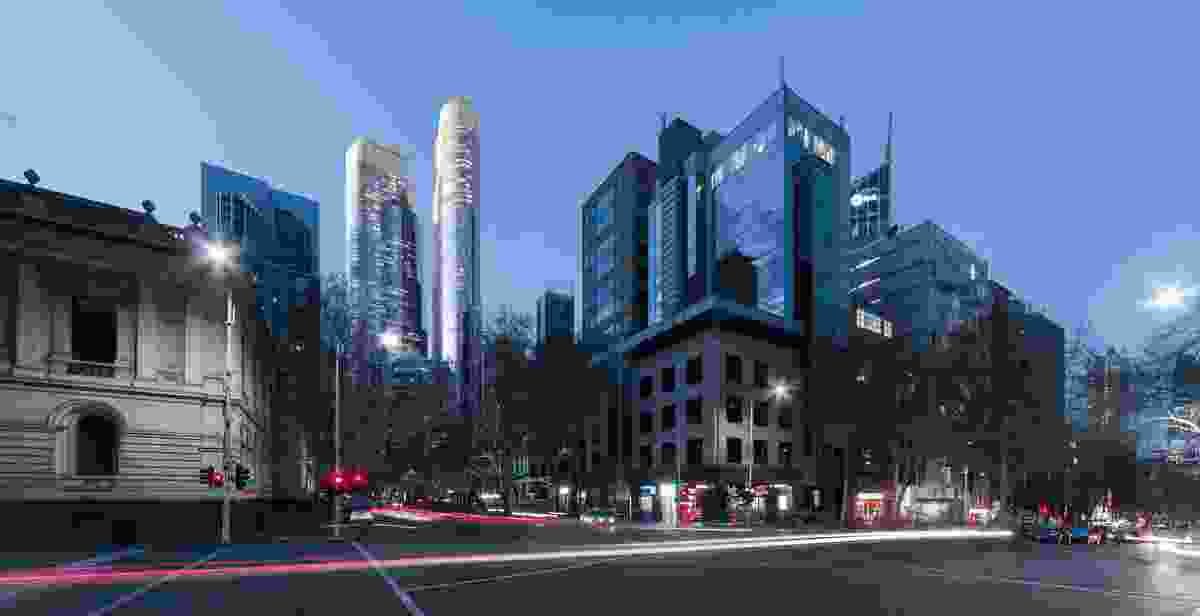 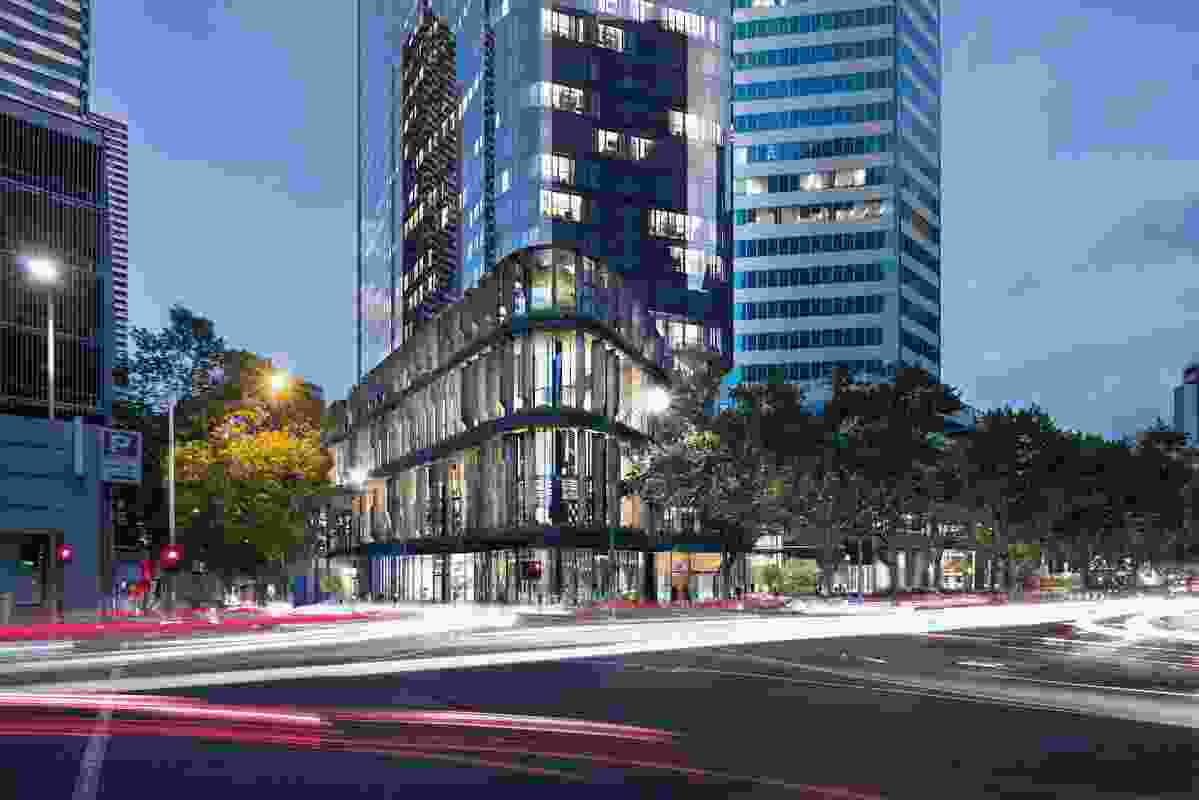 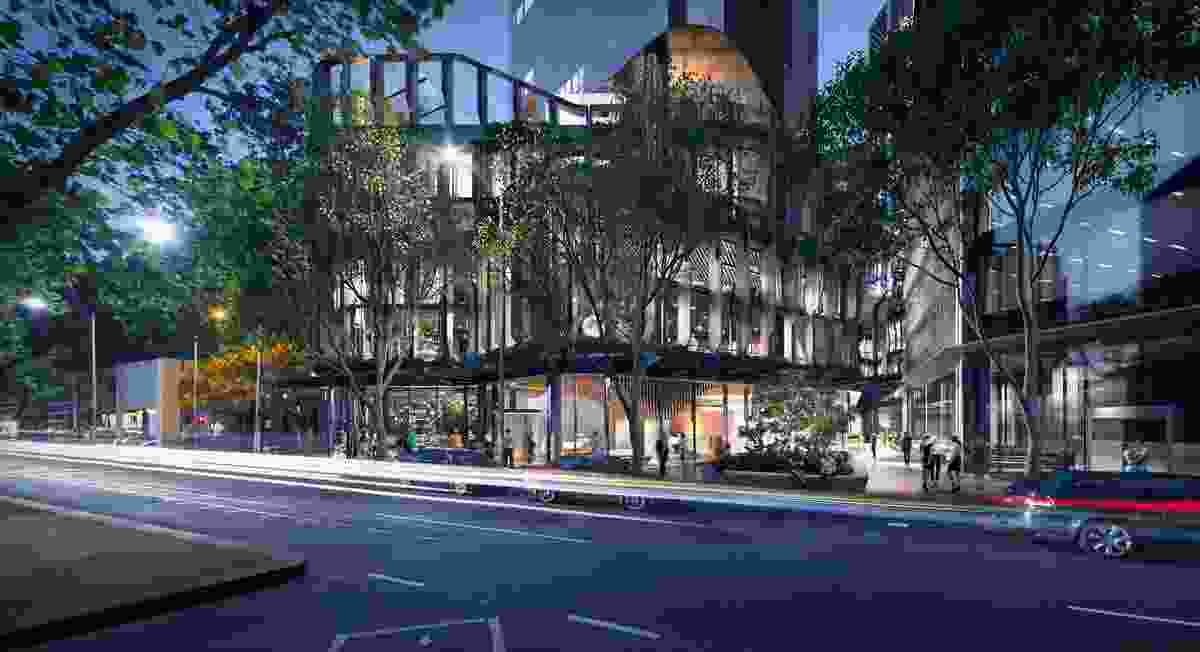 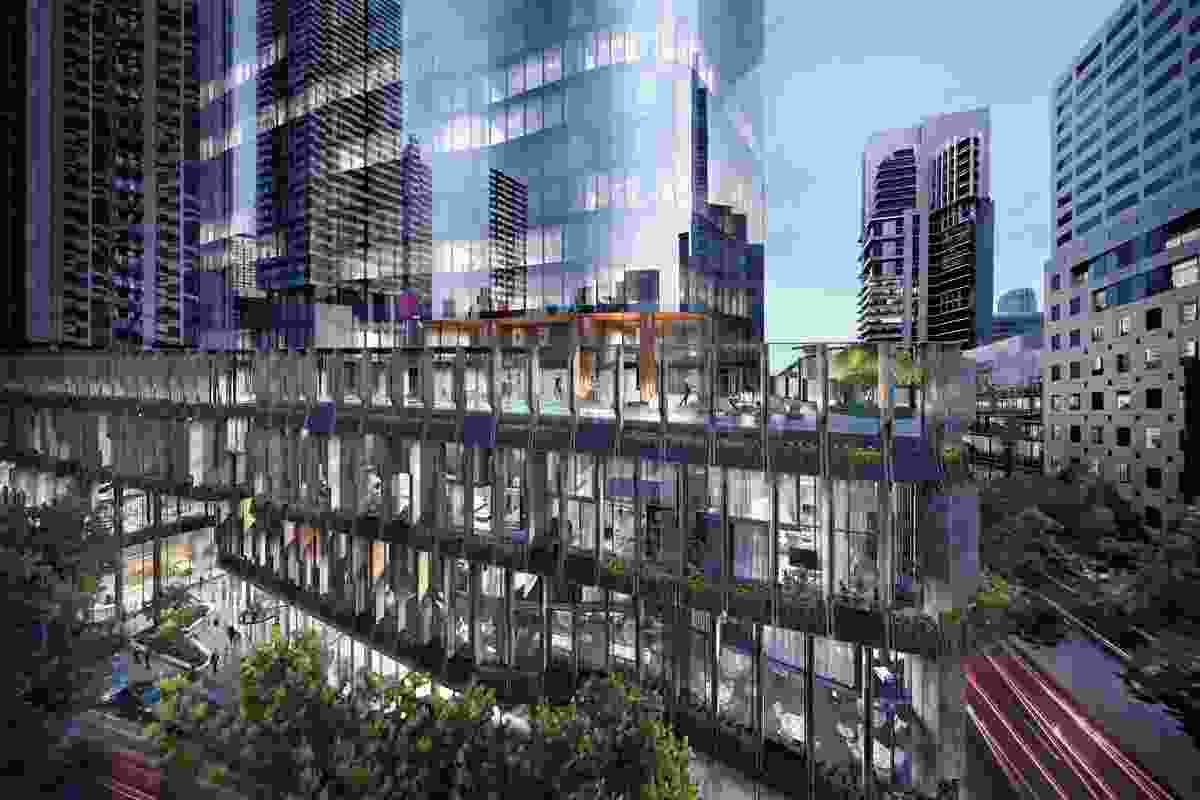 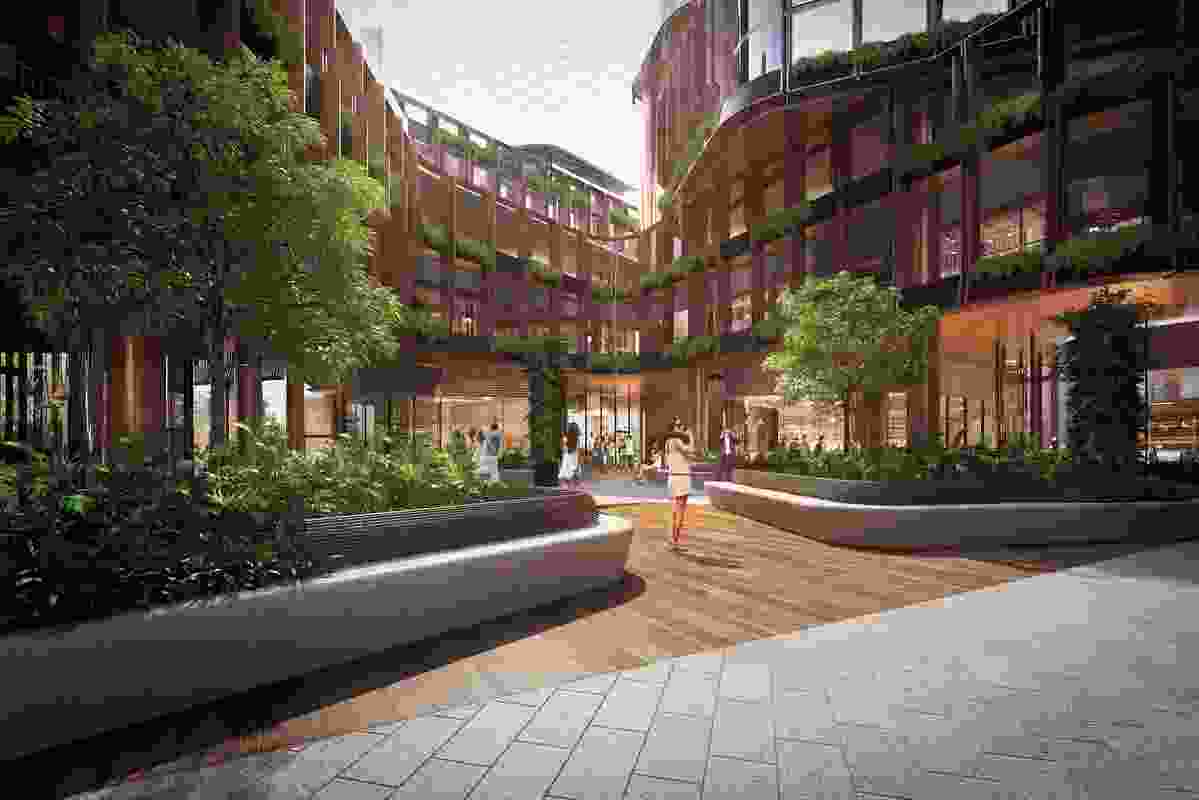 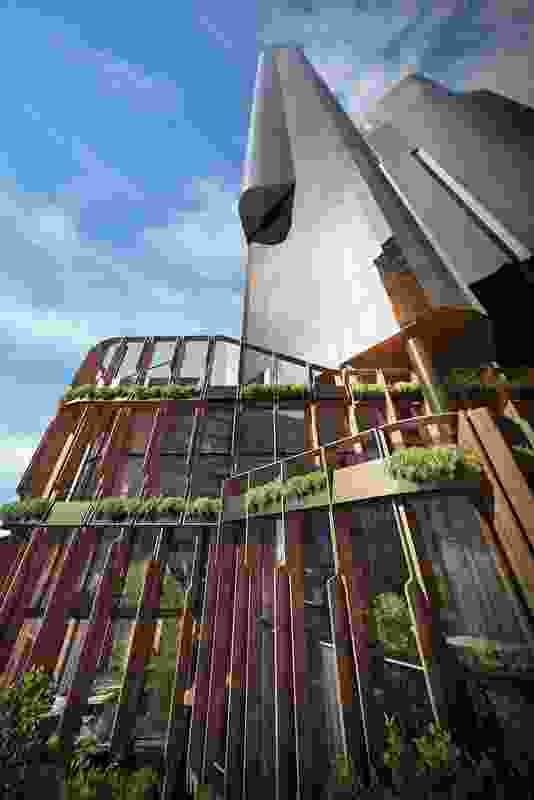 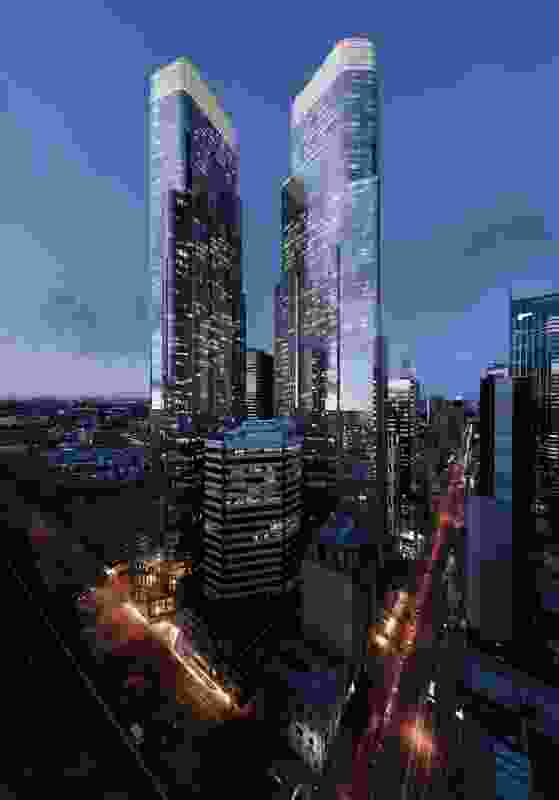 The Queens Place towers by Fender Katsalidis and Cox Architecture, sited near the crest of Flagstaff Hill, will be among the tallest in Melbourne. 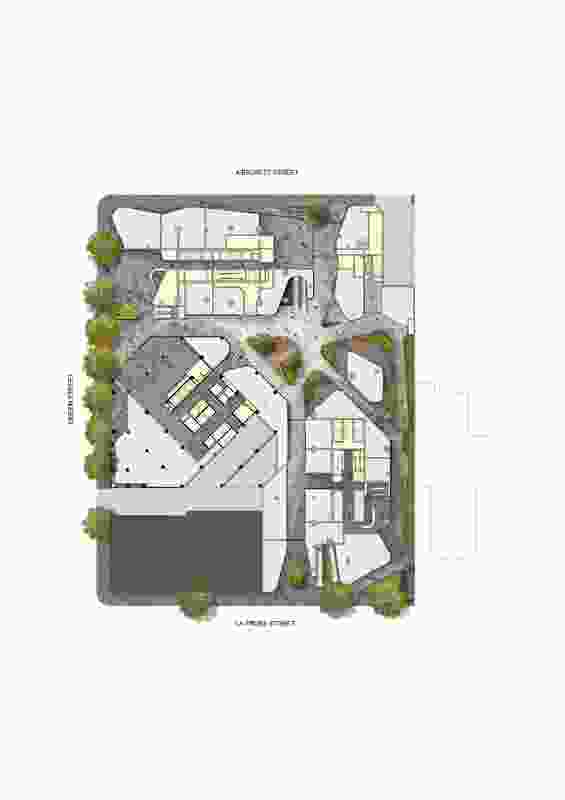 Section of Queens Place by Fender Katsalidis and Cox Architecture.