The NSW government has unveiled the final design for the proposed relocation of the Sydney Fish Market by an international team comprising Danish practice 3XN and its innovation arm GXN in partnership with BVN and Aspect Studios.

The Sydney Fish Market will be relocated from its existing location in Pyrmont to an adjacent, 3.6-hecatre precinct by a wharf in Blackwattle Bay on Bridge Road in Glebe.

The Sydney Fish Market is the largest fish market in the Southern Hemisphere and the redevelopment will more than double the size of the existing market.

3XN said its approach to the project would be to create a major cultural facility that was more than just a fish market.

“This building will be many things when it is done: a working fish market, an amenity for the city, a cultural destination, an urban connector, and an inspiring icon along the world-renowned Sydney Harbour,” said 3XN founding partner Kim Herforth Nielsen. “The natural value of the water’s edge should not be underestimated and should be accessible to everyone.”

The new facility, which will partially hover over the water, will link the bay with parkland opposite the site to the south-east.

The design is inspired by traditional market archetype, which “is the social hub of cities around the world,” according to Nielsen. “We want this one to be as important an icon for Sydney.”

The design is characterized by a distinctive roof inspired by fish scales that will be made from timber and 350 aluminium panels studded with skylights.

The roof is designed to be permeable and will use the prevailing winds to extract hot air from the building to minimize air-conditioning. It will also harvest rainwater, which will be treated and recycled.

The building will accommodate wholesale facilities on the ground floor, with landing and loading docks and an auction floor.

A foreshore promenade will wrap around the wholesale facilities, which will provide the public with a visual connection to the market’s operational floor. The promenade will lead to a retail market hall on the first floor, which will contain restaurants, food stalls and fresh seafood sales.

A mezzanine floor will house office spaces, a bar and the Sydney Seafood School.

The amphitheater and promenade will act as a continuation of the landscape, which also includes a wetland to provide a bio-filtration system for stormwater runoff and grey water recycling from the building, as well as a habitat for local birdlife.

The project will create approximately 6,000 square metres of public domain in the form of two plazas adjacent to the building, as well as a new ferry stop and community spaces.

“The Sydney Fish Market currently attracts more visitors annually than the Great Barrier Reef and accounts for around 20 per cent of international visitors to the Sydney region,” said Berejiklian.

“This brand new fish market will draw locals and visitors to Blackwattle Bay to experience the excitement of an authentic market and auction floor, and taste some of our finest seafood in state-of-the-art surrounds.”

Construction due to start in mid-2019, subject to approvals, and the new market is expected to open in 2023. 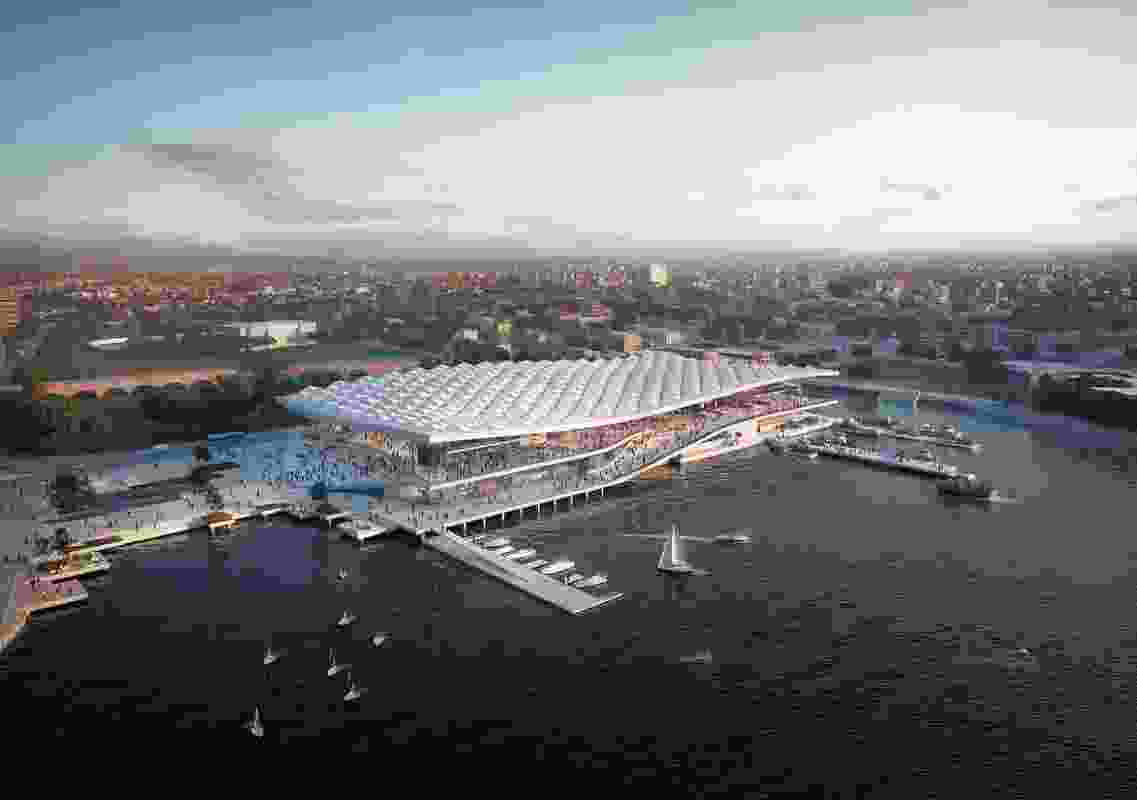 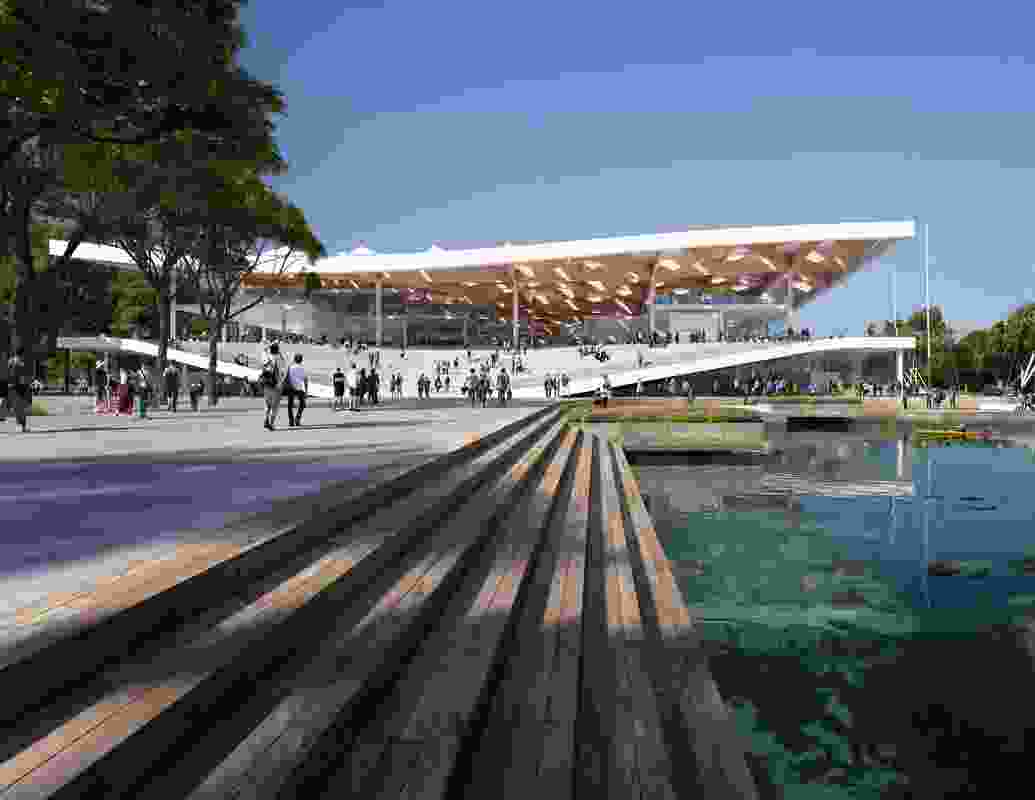 The proposed Sydney Fish Market designed by 3XN/GXN, BVN and Aspect Studios will incorporate public plazas and a foreshore promenade. 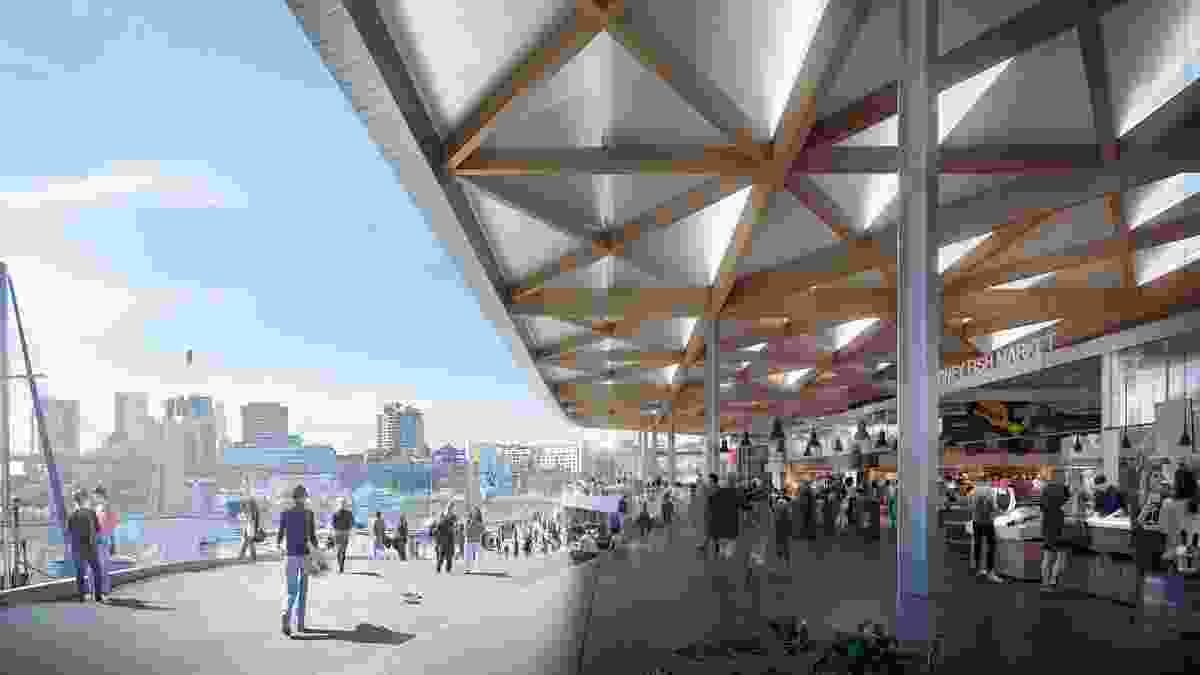 The roof of the proposed Sydney Fish Market designed by 3XN/GXN, BVN and Aspect Studios will be made from timber and aluminium to form a canopy. 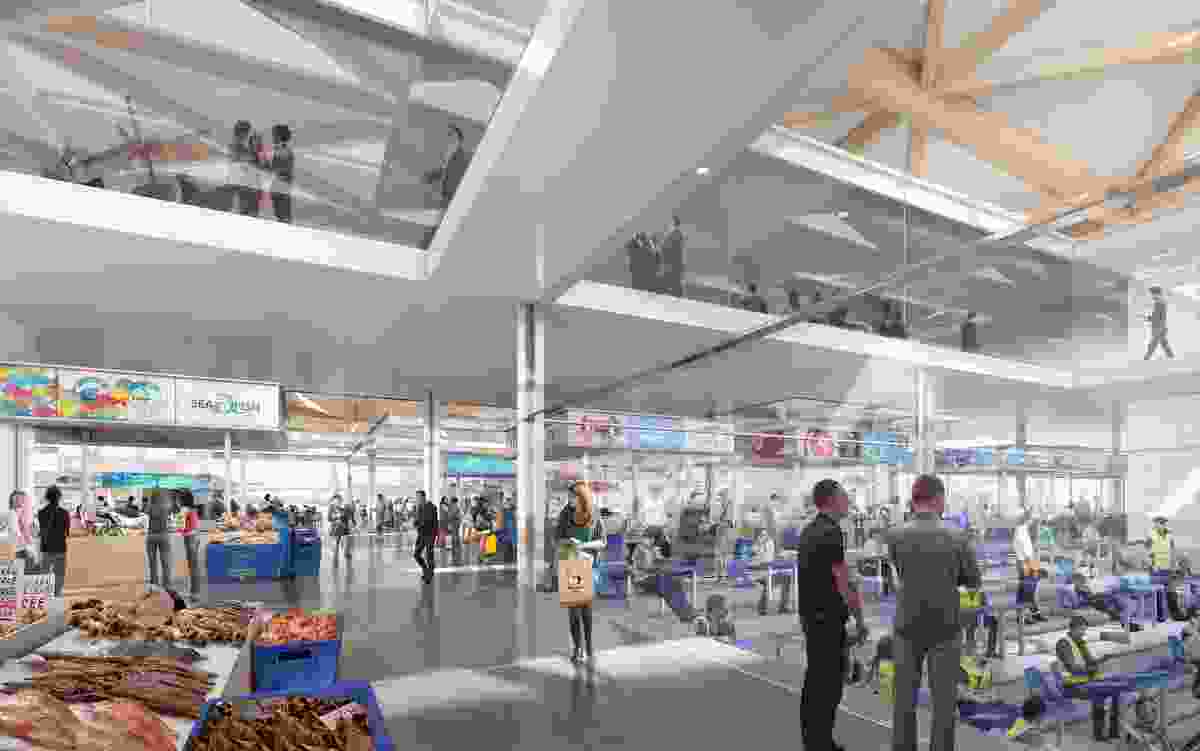 The lower level of the proposed Sydney Fish Market designed by 3XN/GXN, BVN and Aspect Studios will house the wholesale operations of the market.