After a false start that left a terrace house to become a burnt-out squat, a young Ian Moore cleverly transformed this home into two apartments, reconfiguring the layout and making the most of unused space.

In 1988, during my final year at university, I was approached to design significant alterations and additions to a terrace house in Darlinghurst, Sydney. My client had identified three young architects whose work he liked, me being one of them, and asked us for initial ideas of how we would approach the project. I was told that I was his preferred architect and prepared a concept design during 1989, which was first published in the Architecture Bulletin in July 1990, in an issue that featured projects by architects from six young practices: Julie Cracknell and Peter Lonergan, Andrew Stanic and Andrew Harding, Graham Jahn, Stephen Varady, Sam Marshall and me.

My client was an advertising executive who had been living in Asia for twelve years and was unsure of exactly when he wanted to move back to Australia. The project was put on hold and it was not until 1992 that I was given the official sign-off to proceed. The house had become a derelict, burnt-out squat. I vividly remember measuring up and climbing over people sleeping on mattresses in the middle of charred rooms, with graffiti covering any wall not already blackened by smoke and fire. The project took four years to complete.

My brief was to design two apartments, one for my client on the upper levels and one on the lower level that could be let separately. Located on a site that falls ten metres from the street to the rear lane, the building offers a panoramic view stretching from St Vincent’s Hospital in the west to Bondi Junction in the east. An existing separate entry from the street to the lower ground floor allowed for a self-contained one-bedroom apartment, with the rear yard half a level below that again, falling a further full level to the rear lane. This provided the opportunity to construct a two-car garage below a split-level rear courtyard.

The existing house highlighted some of the shortcomings of the Victorian terrace house type, in which all the major rooms address the street and the ancillary functions are relegated to the rear wing, with – in this case – a single 1200-by-800-millimetre window taking advantage of the dramatic view. The living areas were on the street level, with bedrooms on the upper level. The lower ground floor level had been the kitchen and dining room. There was also a large unoccupied roof space.

The primary concept was to reorient the house to the rear of the site and to invert the original arrangement, with the living spaces moving to the upper level and bedrooms to the street level. There was also a desire to dispense with cellular rooms in favour of a large, open-plan living space extending out onto a roof terrace to the rear and to the existing verandah above the street, as well as extending vertically into the roof space to create a double-height living area with a mezzanine study above. The open-plan living areas, double-height space and mezzanine have all become regular features of my subsequent projects, in both single houses and apartment buildings.

The dilapidated rear wing was demolished and a new exposed steel- framed wing built. It incorporates an aluminium-clad spiral stair, allowing access to the rear garden and garage from the roof terrace without disturbing the occupants of the apartment below. The street facade was faithfully restored to its original Victorian detail and is a clear contrast to the contemporary rear wing. As in a number of my more recent projects, the contrast between old and new is clear externally but internally there is a seamless integration of the two.

The kitchen, which opens to the front verandah, is divided from the main space by a three-quarter-height joinery element, clad in timber veneer to differentiate it from the structural walls. It is, in effect, a piece of furniture rather than a wall. This has become a recurrent theme in my work, in which service spaces are contained within pods, distinguished from the enclosing building envelope by use of material or colour.

The main spaces double as a gallery for the owner’s collection of Asian artefacts and contemporary artwork, completing the transformation from Victorian terrace house to urbane, modern apartment. 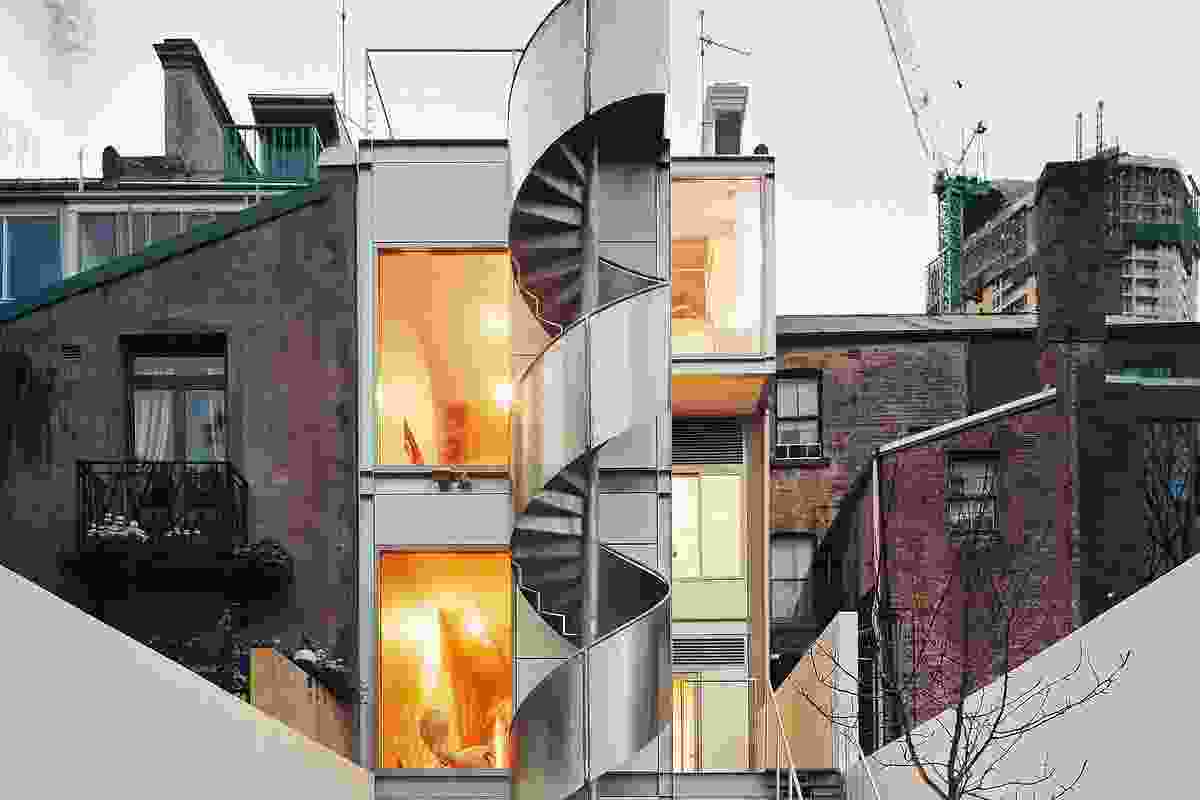 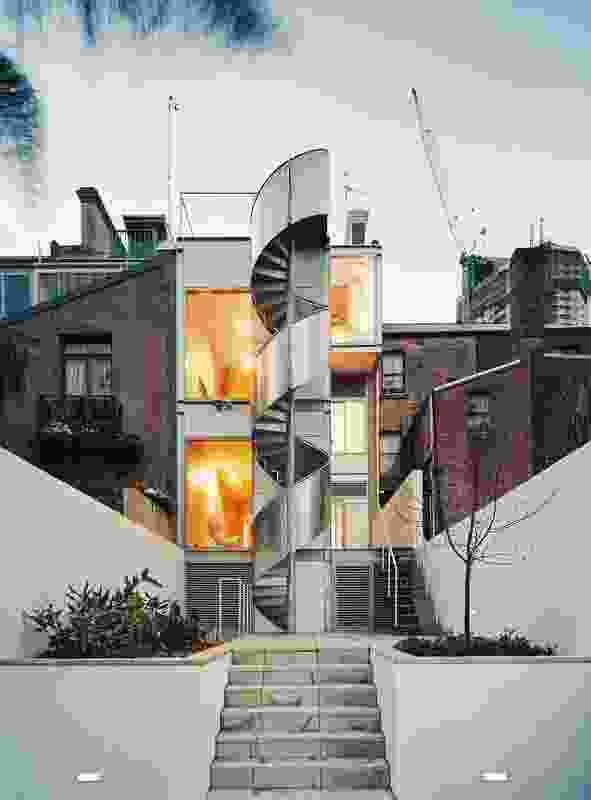 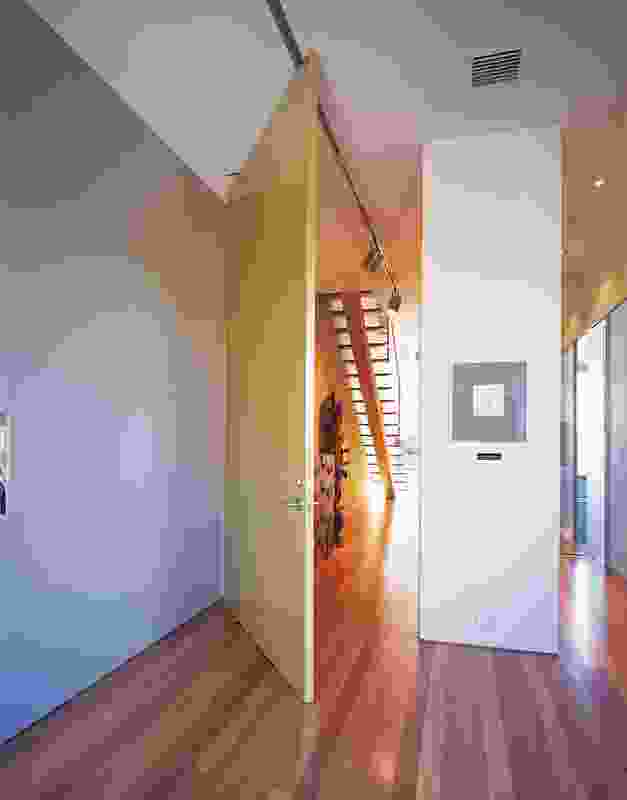 Service spaces are contained within pods, distinguished from the enclosing building envelope by use of material or colour. 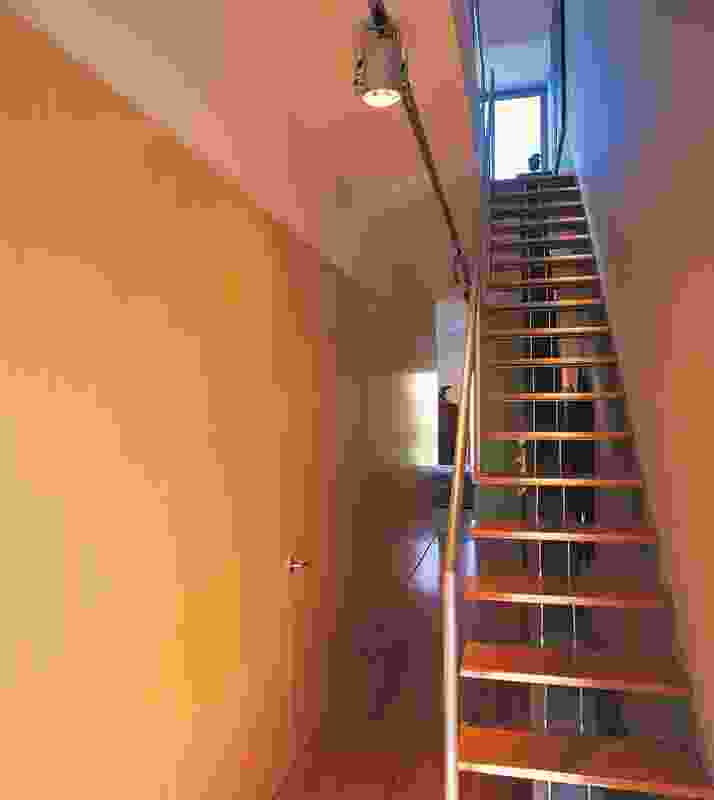 The new configuration places the living spaces on the upper level and the bedrooms on the street level. 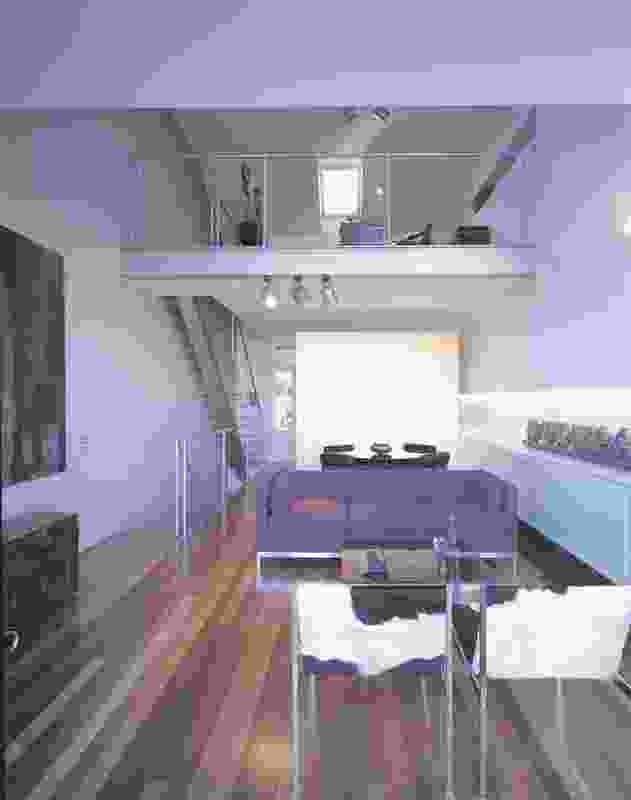 The open-plan living, double-height space and mezzanine have become regular features of the architect’s subsequent projects. 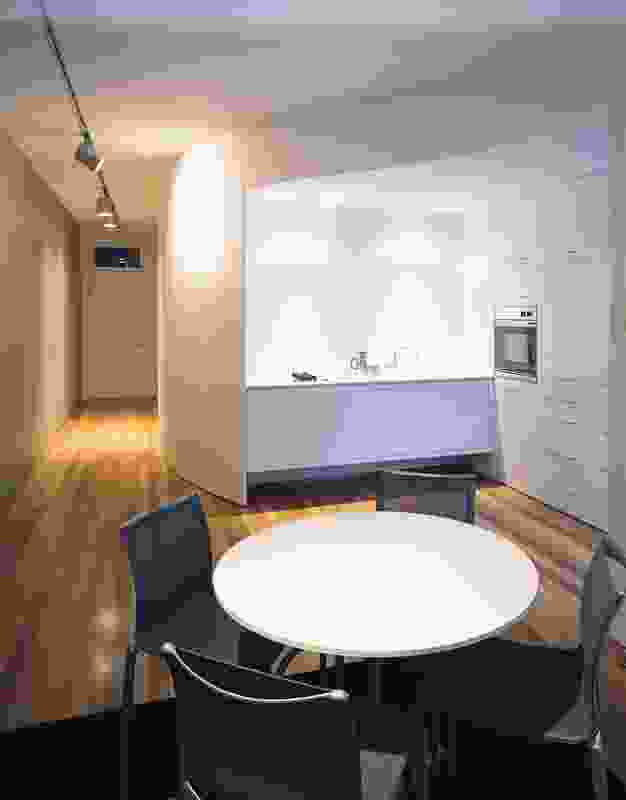 The lower ground floor consists of a self-contained, one-bedroom apartment with separate access to the street.