An intuitive design response by Adrian Amore Architects creates a geometric centrepiece for this terrace house renovation, with a stair that functions as much more than just vertical circulation.

The lower level of glazing is transparent to the light well and the upper level is frosted for privacy.

Architect Adrian Amore doesn’t do things by halves. The voluptuous curves of his Loft Apartment, winner of multiple awards including the Apartment or Unit category of the 2014 Houses Awards, demonstrated his strong grasp of geometry and dramatic spatial manipulation. At this terrace house renovation in Melbourne’s inner north, Adrian has applied these skills to the common problems associated with these narrow, poorly lit and poorly ventilated homes. Originally built in the 1970s, the Fitzroy Terrace was in very poor condition and needed more than just tender loving care – it needed almost a complete rebuild.

Only three structural walls of the original building remain. The street facade has been rendered and painted white and the two walls that contain the front bedroom have been retained and resurfaced. With a relatively clean slate to work from, Adrian still had to deal with the shortcomings of a narrow terrace house site and he has done this in almost one clean swoop, using a faceted spiral staircase that punches through a void and is located adjacent to a light well. This creates an architectural volume that spreads natural light throughout both levels and doesn’t take anything away from the limited floor area. Despite it being one of the more expensive options presented to the clients, they completely embraced the idea.

Of the stair’s geometric form, Adrian says, “Design is always an intuitive thing for me.” The design evolved from a smooth spiral into a faceted form – and then continued to be developed throughout the structural process. Originally the idea was to have the geometric surfaces plastered over a steel frame, but the fabricators made it work (surprisingly within budget) using just steel plates. The stair became a mathematical dilemma that would have stumped many, but Adrian rose to the challenge. “It was very difficult to work out all the angles as the space is tiny – the stair void is only 1.5 metres wide at the top.” For the design of the black steel handrail, Adrian put together a rough sketch for the fabricators. Welders then put the pieces together as he designed it, as a physical object, in the factory. This hands-on approach shows how this object has been treated as a piece of artwork – a centrepiece for the home.

The stair sits between the kitchen and the rest of the open-plan living area, adding another function to this object, that of a room divider. The living area opens out to a small courtyard at the rear of the property, but receives its impression of more space via the double-height void through which the stair spirals. The angles of the stairwell are cleverly reflected throughout the home, with angled window frames and joinery, a stretched, pentagonal kitchen island bench and a triangular window on the first floor.

The external form of the addition is shaped by local setback requirements in order to maximize floor space on the upper level. The close proximity of neighbouring properties in a row of terrace houses is often a difficult constraint to work with – particularly regarding the balance of access to natural light and the protection of privacy. For the design of the Fitzroy Terrace, Adrian paid close attention to this balance using screening, frosted glazing and strategically placed windows, as in the light well where the bottom level of glazing is transparent, while the upper level is frosted for privacy.

With one of the original two bedrooms replaced by a new kitchen, ensuite and powder room on the ground floor, two new bedrooms have been added on the first floor – one at each end of the void. A laundry is located behind a hidden door that runs along the circulation space between the two bedrooms. This upper-level circulation bridge sits within the void created by the stair, borrowing light and space to make this area feel bigger than it actually is.

For such an intuitive designer, trusting clients make the process much more rewarding for both parties – as Adrian says, “Clients get the best out of me if they trust my instinct.” The clients for the Fitzroy Terrace have owned the house since the early 1980s and it has since been rented. Structural issues prompted the clients to make the decision to engage an architect, but they always intended to remain in their home a bit further out of Melbourne and continue to rent the property after the work was done – an easy thing to do in such a desirable pocket of Melbourne.

The terrace house is a good model for compact, sustainable living in inner-city suburbs and there are lots of reasons to adapt them to suit the Australian climate and living patterns. Although there is a consistent set of problems associated with terrace houses, architects continue to come up with fresh solutions to these challenges and Adrian’s intuitive approach to the design of the Fitzroy Terrace is a great example of this.

Other
Furniture supplied by Stylecraft. 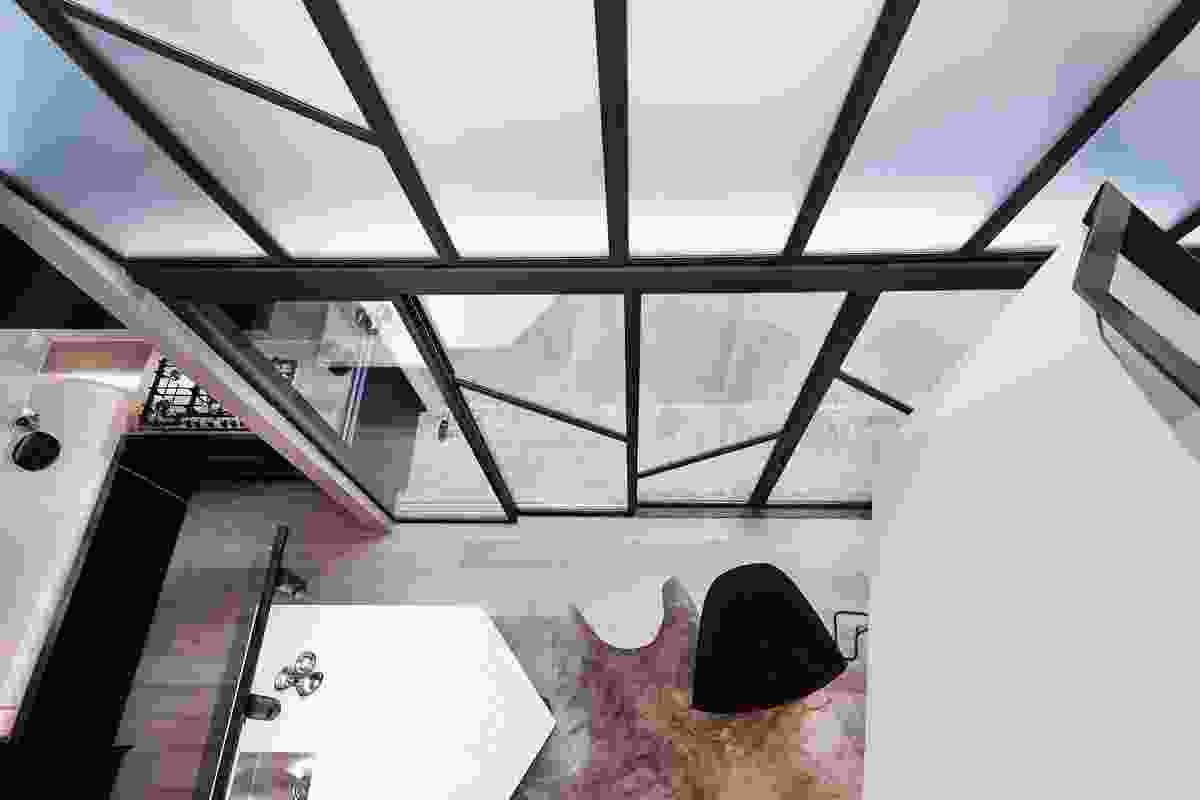 The lower level of glazing is transparent to the light well and the upper level is frosted for privacy. 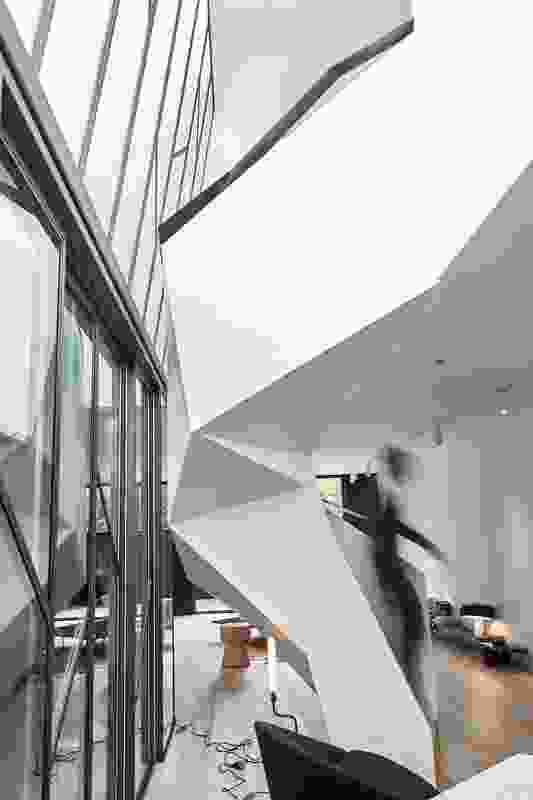 A faceted steel stair spirals up through a void at the centre of the open-plan living area. 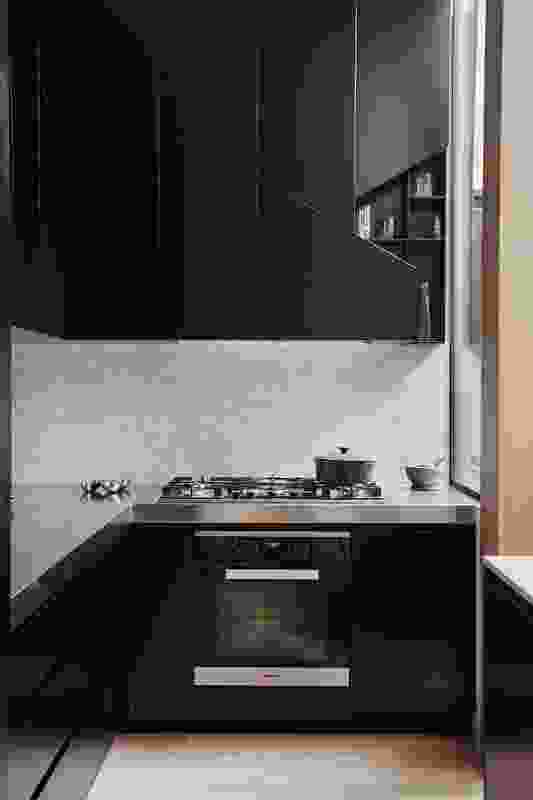 The angles of the stair are carried throughout the home, including in the kitchen joinery. 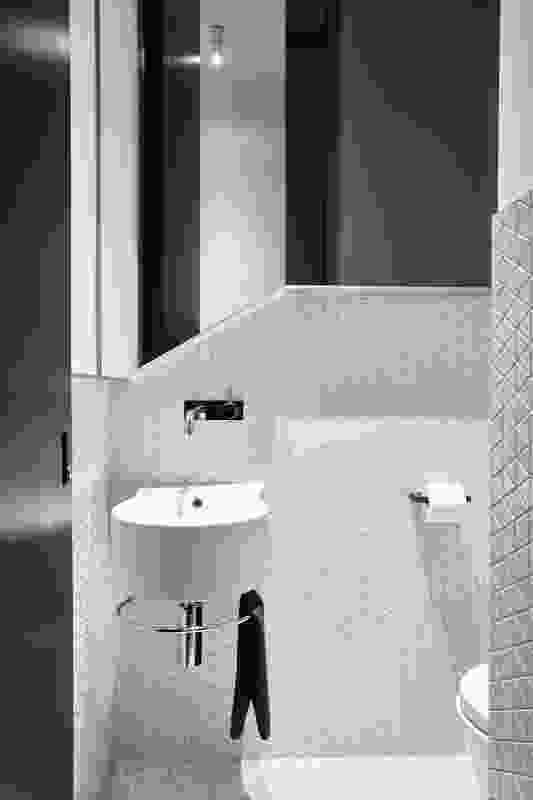 A small powder room is tucked between the existing bedroom and the new kitchen. 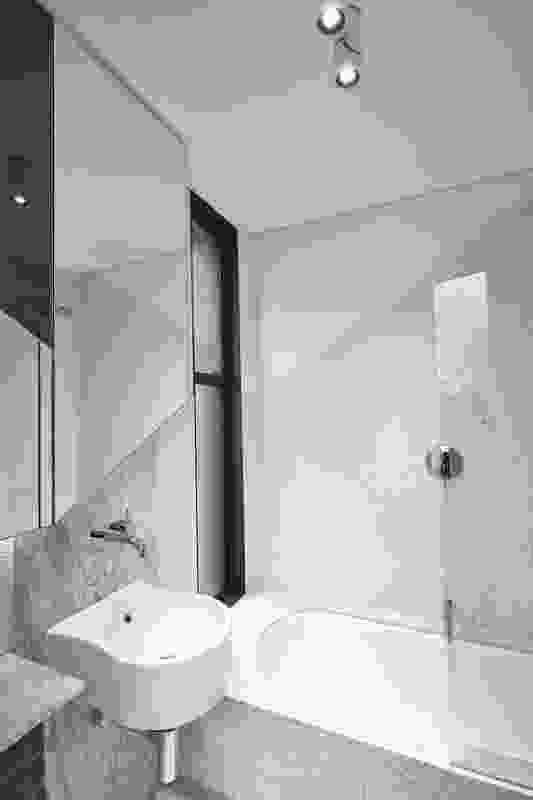 The textured palette of materials is limited to black, white and grey throughout the home. 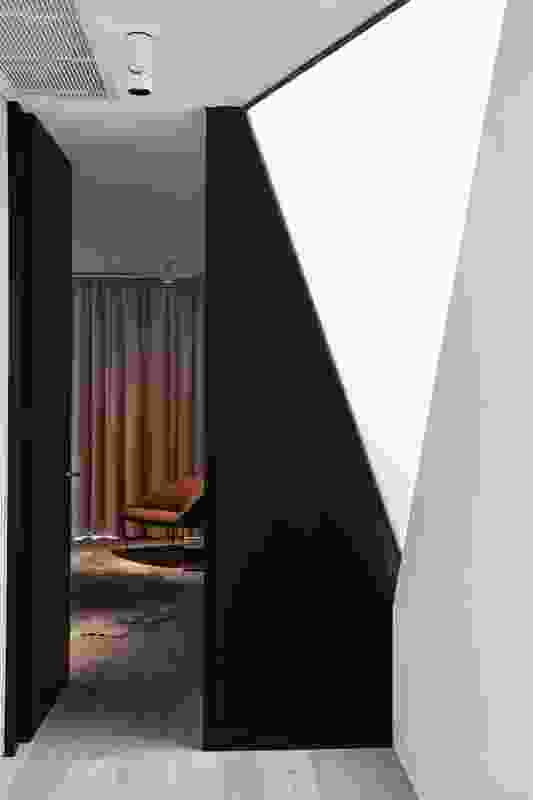 A triangular frosted window on the upper level adds natural light and a touch of drama. 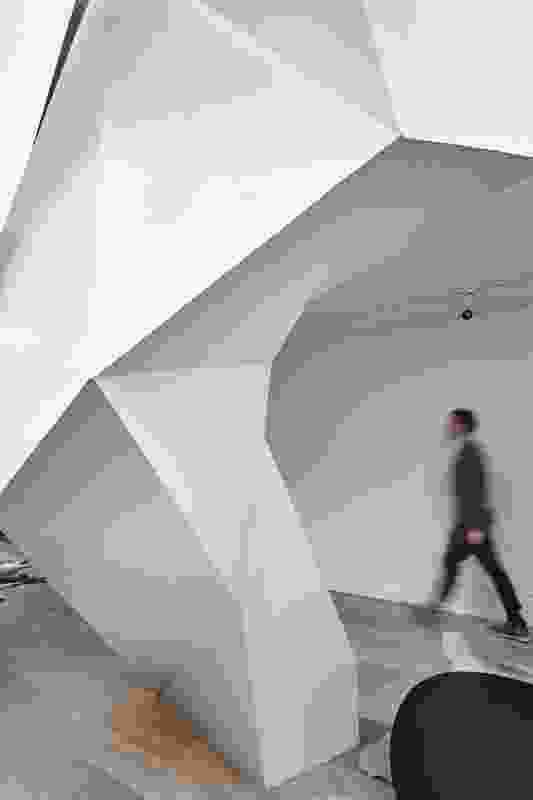 Adjacent to a light well, the staircase spreads natural light throughout both levels. 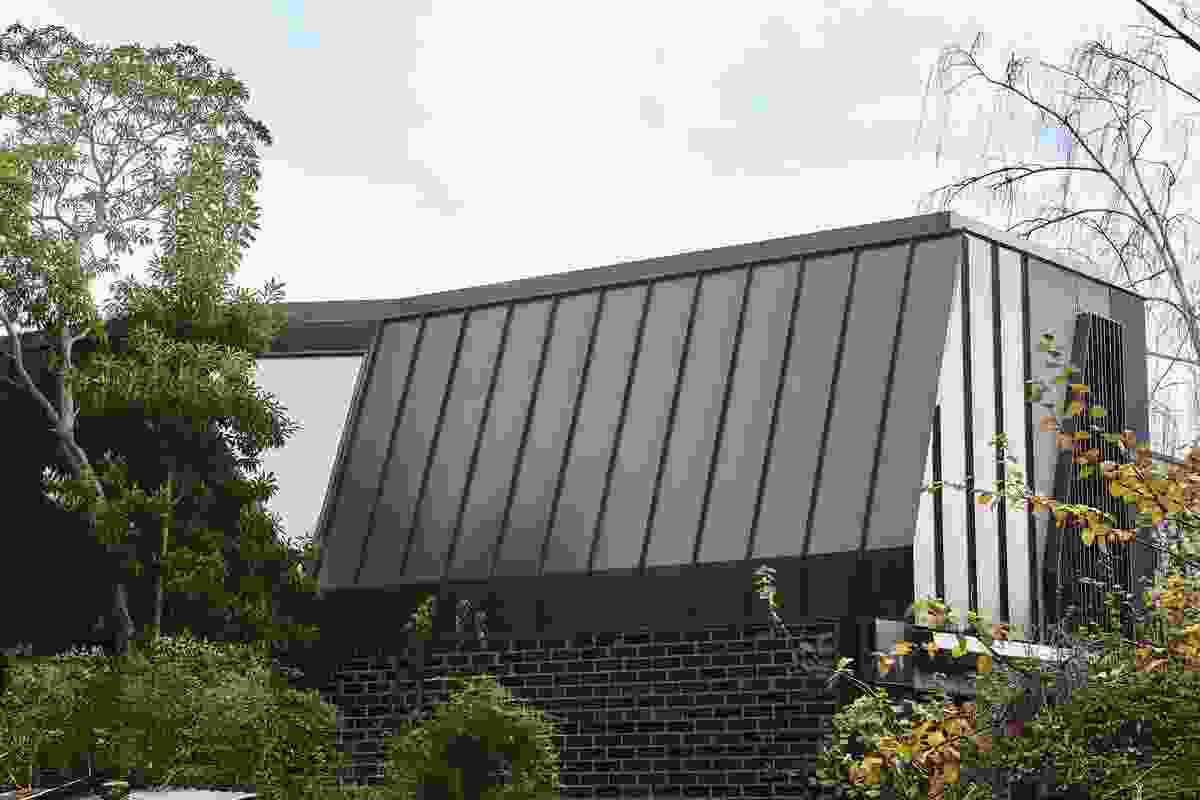 The external form is shaped by setback requirements in order to maximize floor area on the upper level.