A house on Victoria’s Mornington Peninsula by Ashley Lochhead Architects appears from the street like a TARDIS. Cloaked in silvering cedar, with a single window, it gives no clue of its welcoming interior.

From the driveway, the elevation reads as a flat, timber face.

Some people would do anything for a house – and location – like this. A short walk to the beach and a stone’s throw from the tenth hole of the nearby golf course, this is the holy grail for some sort of super-leisurely golfer-surfer hybrid (who I suspect wears a wetsuit-and-tartan-pants combo on their days off).

But for the original clients for this house on the Mornington Peninsula coastline, who have a young family, golf and surfing must wait. Of greater importance to the design of their home was that it be robust yet uncomplicated – a brief Ashley Lochhead Architects has delivered with this box in the bush.

The site, a long bar that juts slightly into the golf course, was originally dense native bushland, which was cleared to make way for the home. While the linear site commands the strong shape of the house, the established landscape softens it.

From the front gate, a driveway leads to the facade – a flat, timber face. It’s a curious, dare I say it, scheming face, one with a single eye and an underbite. I’m suspicious because he’s hiding something from me – the front door. My eyes dart in search of it until I spot the crazy paving. This leads to the entry, which is indented into the box shape and hidden from view from the driveway. This indent is paralleled with a back entry to the living space on the diagonally opposite corner.

Moving around the boundary of the site, the timber is inescapable. You look up and it’s there, high and wide, for the family and neighbours to revere. But here it’s coastal, it’s reminiscent of a beach shack, it’s Aussie. The outdoor entertaining deck is shielded by the northern sloping boundary, protecting guests from a weather forecast that is “always, always windy” and allowing them to take in the coastal sun. A patch of lawn leads from the deck to a pool on the western end, as well as to an access path to the golf course.

The house’s keystone, its cedar screens, are applied to the north and west facades, while blackbutt fins vertically scale the northern and southern sides. The cedar screens, aside from providing privacy from neighbours and protection from the sun, also protect from stray golf balls from amateurs on the tenth hole. In fact, there have been so many that a small Buddha statue on the deck has become the spot where these stray balls go to live (on my visit I counted six). If Buddha’s concept of karma is anything to go by, the guilty golfers might want to conduct their business wearing a helmet.

The timber facade has aged charmingly since completion. Originally given a stain, the cedar battens have since been allowed to weather naturally, resulting in a rich grey colour on the northern side and a paler grey on the southern side, where they are more exposed to the salty sea air. The southern side’s outlook is choppy, with dense bracken fern, banksias and gums to the boundary only metres away – a stark contrast to the millpond that is the golf course fairway to the west.

That sly face may have tricked me earlier but upon stepping inside I get the feeling we will get along just fine. This is a different side of the house – light, gentle and friendly. On the ground floor, a circulation spine runs down the southern side and accesses the garage, laundry, a small bathroom, and spacious kitchen and living areas. This south-facing side is dotted with full-height view windows every five or so metres, providing glimpses of the bush setting.

While the premier living space is set into the side of the site, its north-facing orientation and line of full-height windows provides good light. Single doors open up the living area to the outdoor deck, but stop gusts of wind from coming in. The polished concrete floor is paired with white laminate joinery and an American oak island bench and shelving in the adjacent kitchen.

Upstairs, the timber screens work doubly. All at once they provide beautiful dappled light to the upstairs bedrooms and bathrooms and an underlying grid to the entire house, with each room measuring three 1200-millimetre battens across.

The southern spine works upstairs again along the thirty-six-metre length, with views out either end. On the furthermost end, the main bedroom looks out over the pool and golf course, with glimpses of Bass Strait to the south-west. A walk-in wardrobe, two bathrooms, three bedrooms and an east-facing study follow in sequence down the hallway. The two bathrooms, identical in their appearance except for a hob around the bathtub in the children’s bathroom, are spacious, again afforded their three-batten length. The bathrooms employ a cubicle-style format with a shower and toilet tucked around the sides, and a long limestone bench and generous mirrors on the opposite wall.

The secondary bedrooms are configured in similar ways, with a built-in desk along one wall and a wardrobe on the other. These bedrooms are serviced by large sliding doors that keep the spine clear and open up the rooms.

It might not be obvious when you stroll into the driveway and see that one-eyed timber face staring back, but it’s a friendly house, this one. The exterior’s stern form and rhythm give way to a welcoming interior that is full of warmth and respite. As I’m leaving, I take a look back at the face. It’s here I realize that that’s not some “one-eye” sneer at all. That’s a wink. 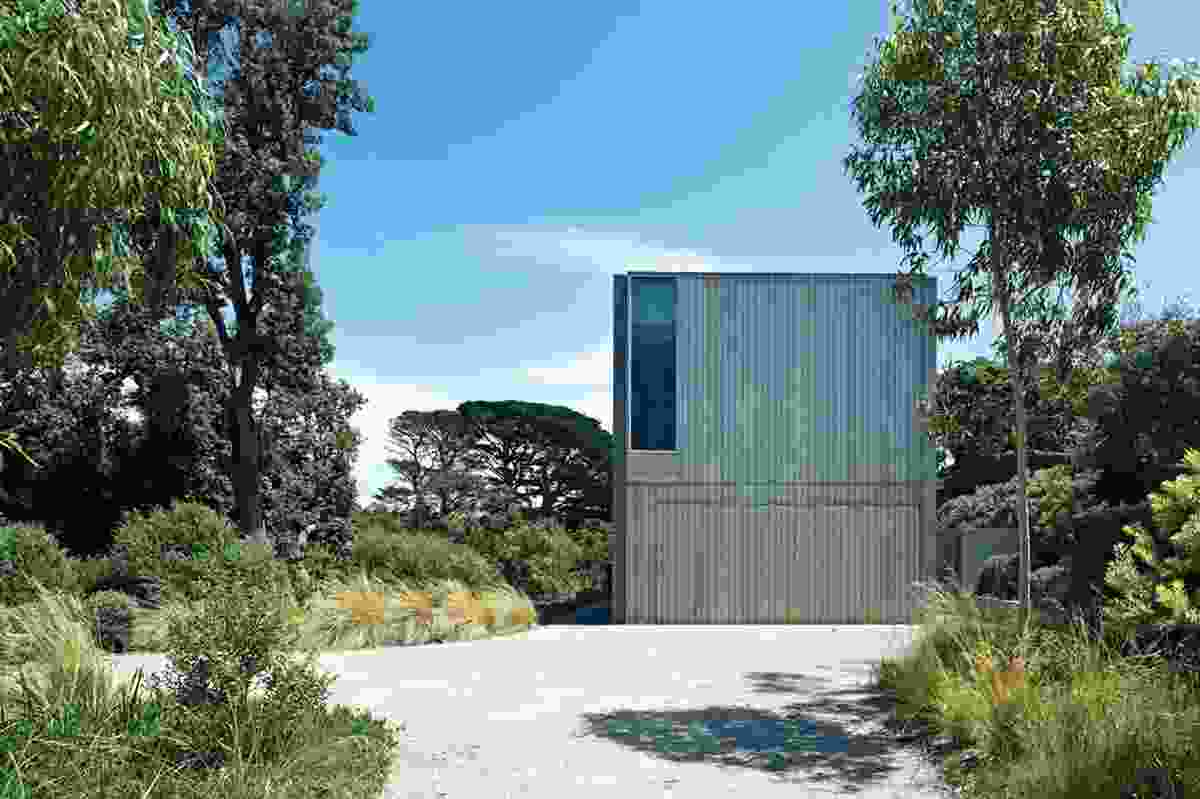 From the driveway, the elevation reads as a flat, timber face. 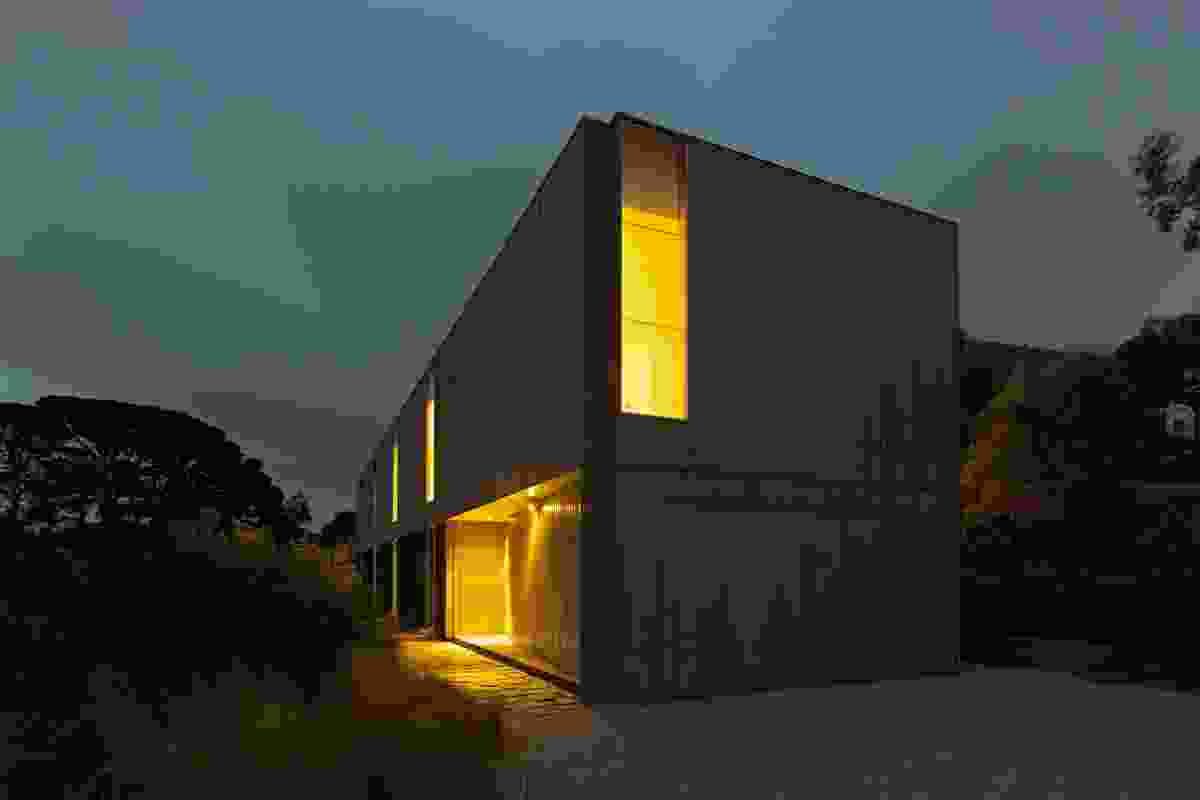 The nigh view illuminates the front entry – obscured by day. 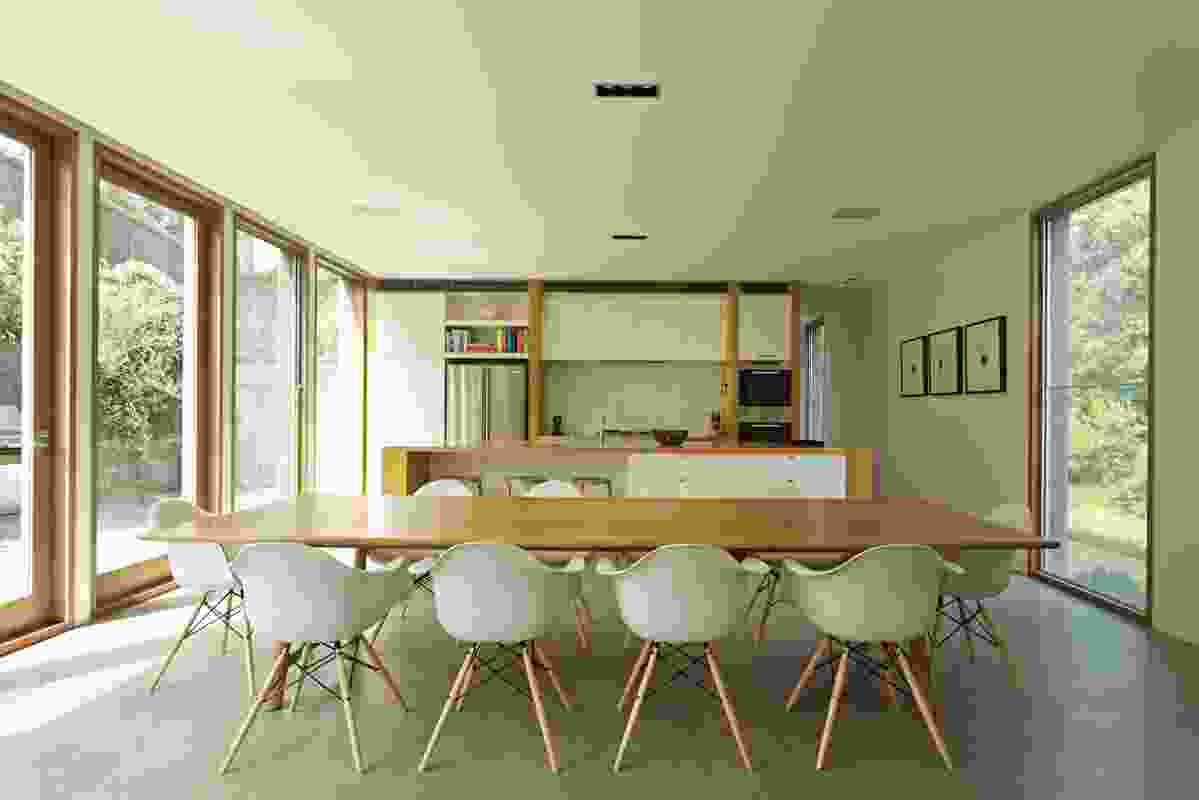 The interior is segmented within the linear plane of the house. 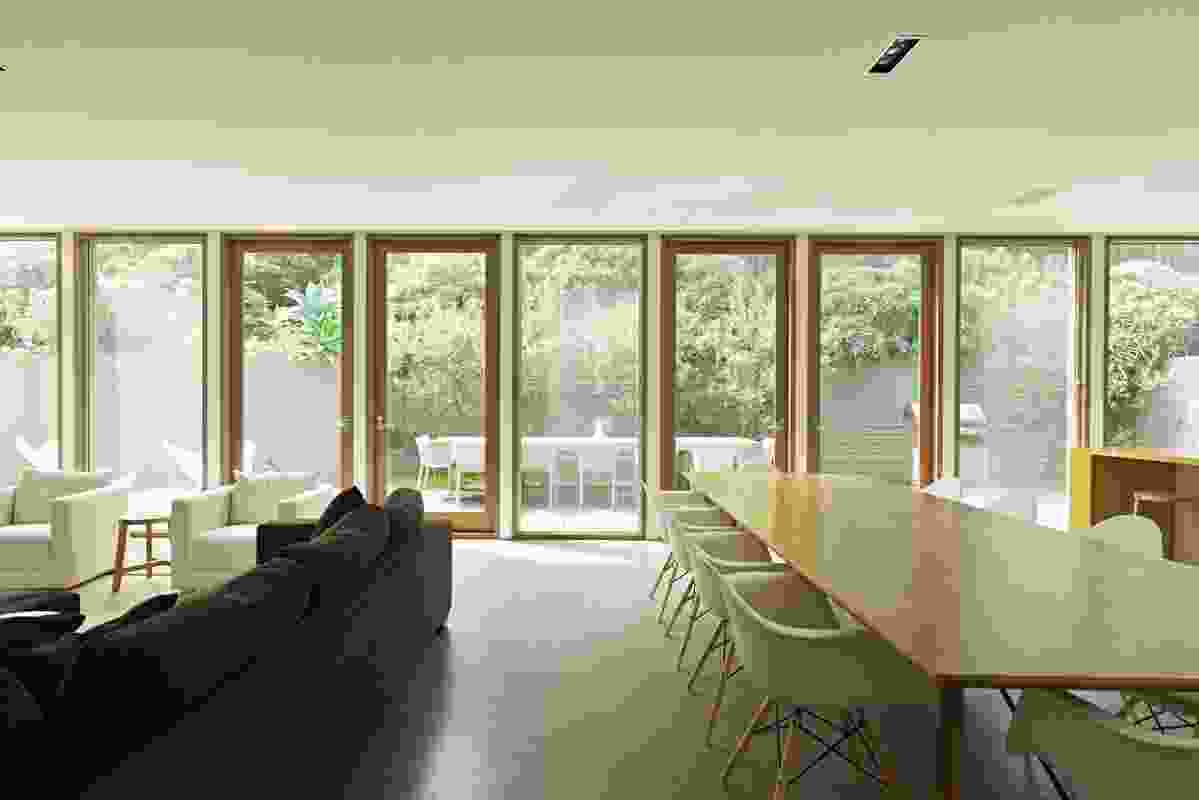 The north-facing living space is lined with full-height windows. 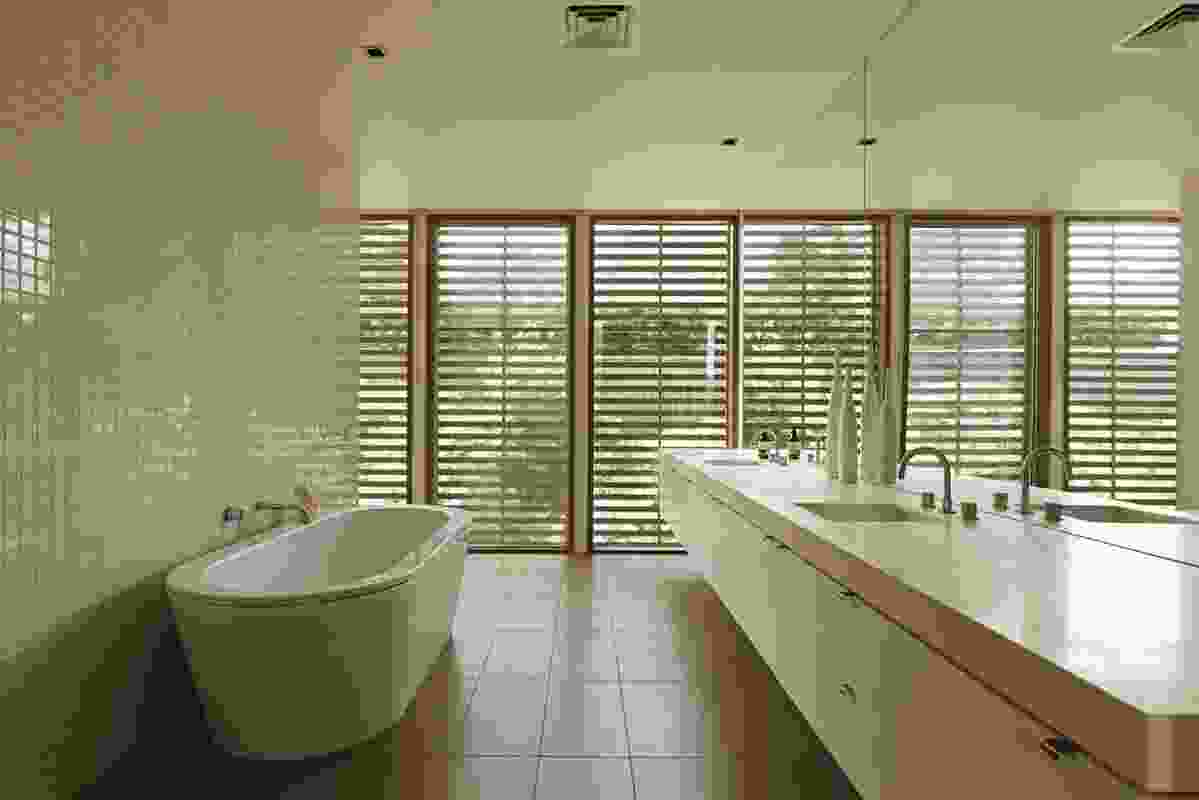 Shower and toilet are tucked around behind the baths. 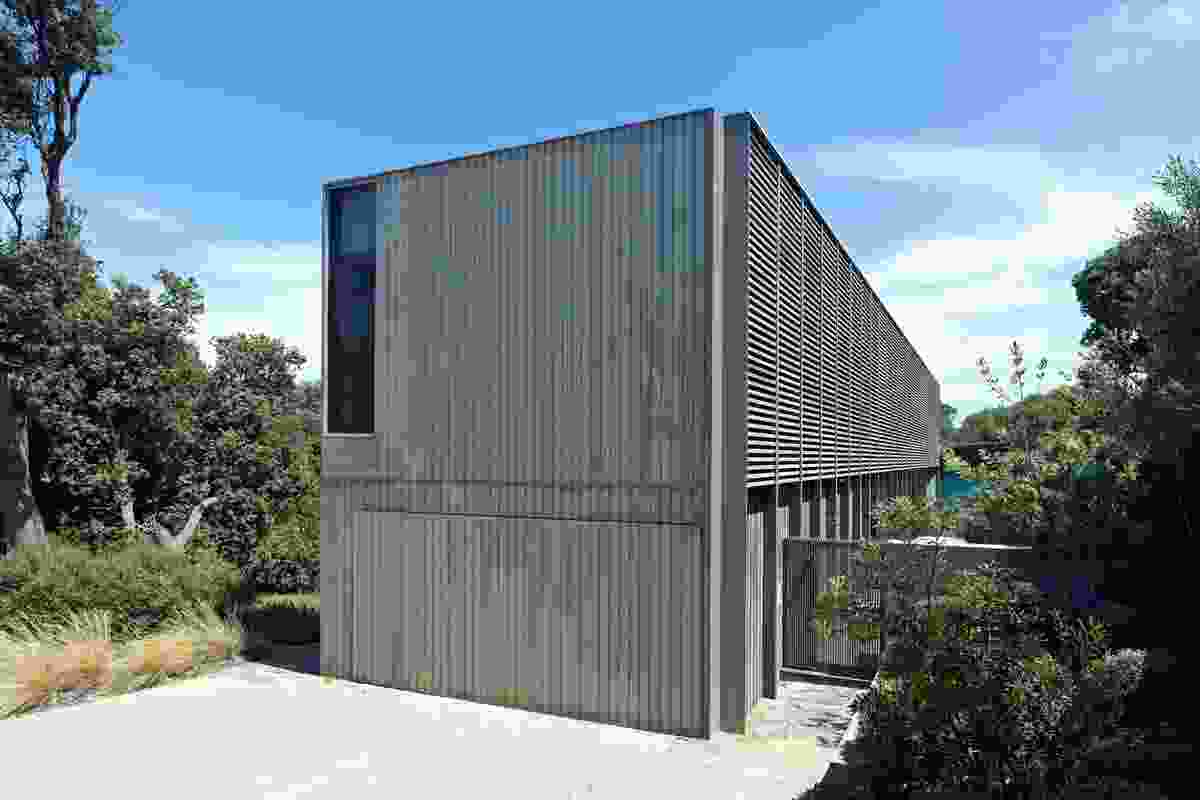 North elevation from the front. 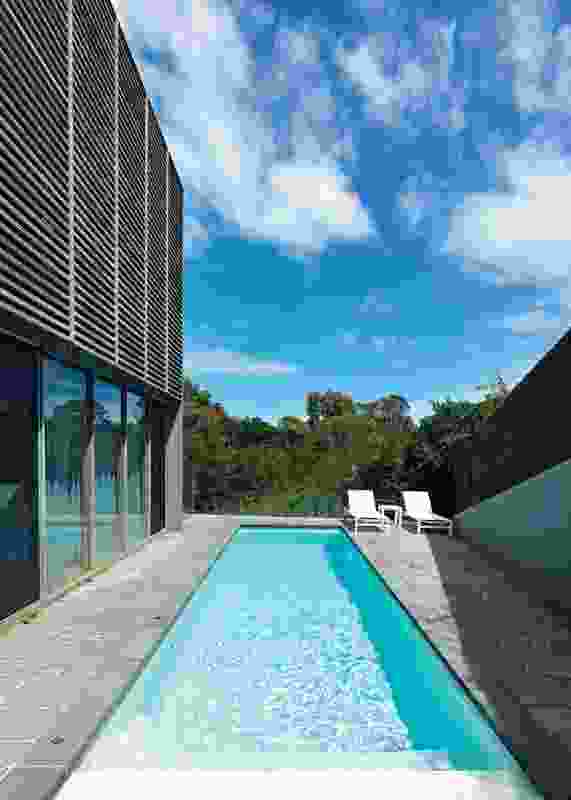 The sloped northern boundary shields the pool and deck. 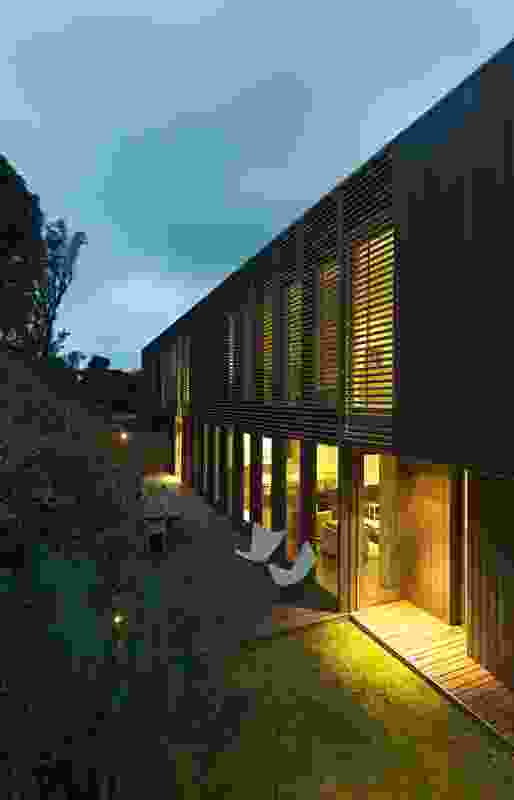 The night effect of the timber-batten screens. 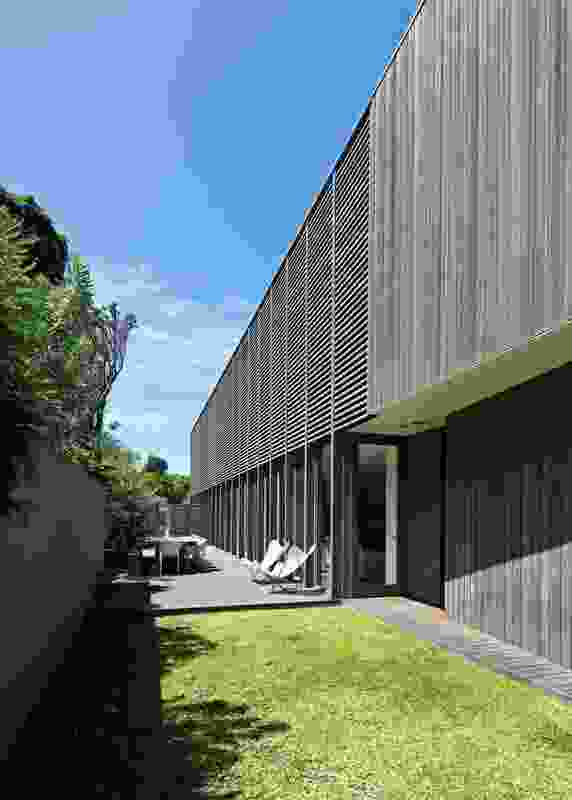 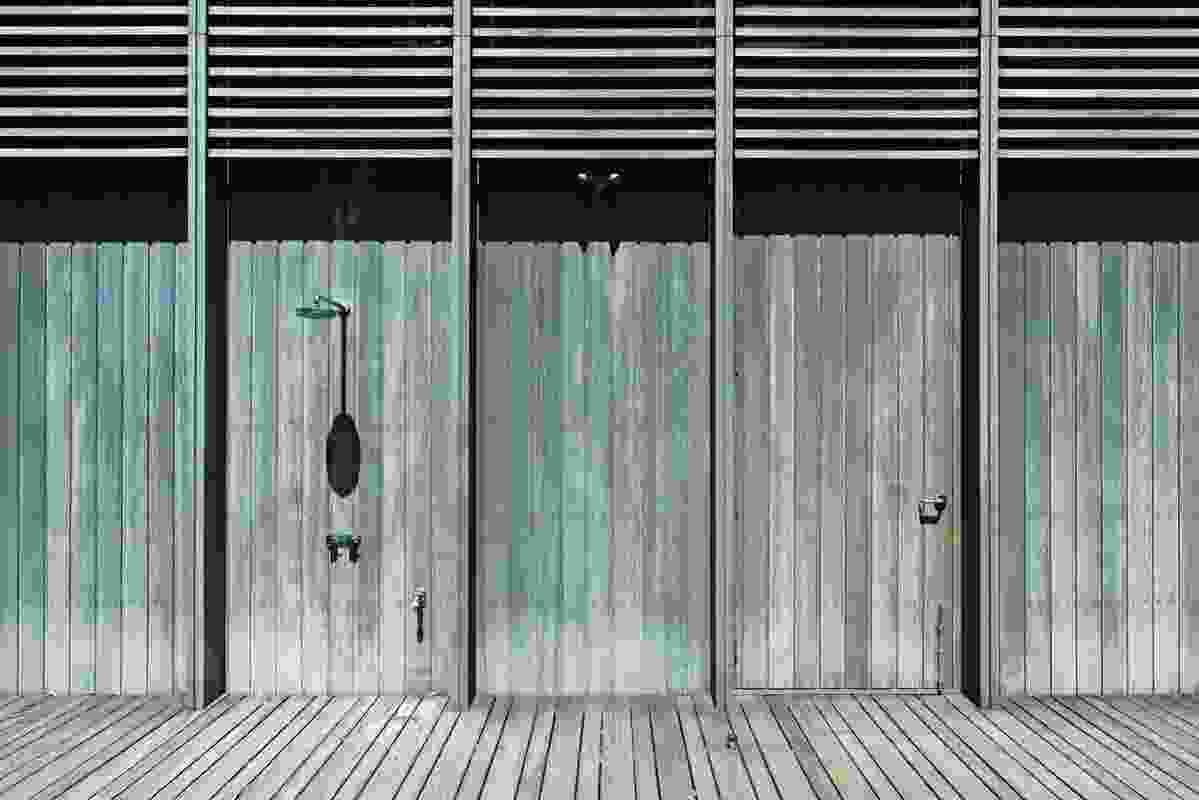 The weathering boards are reminiscent of a beach shack. 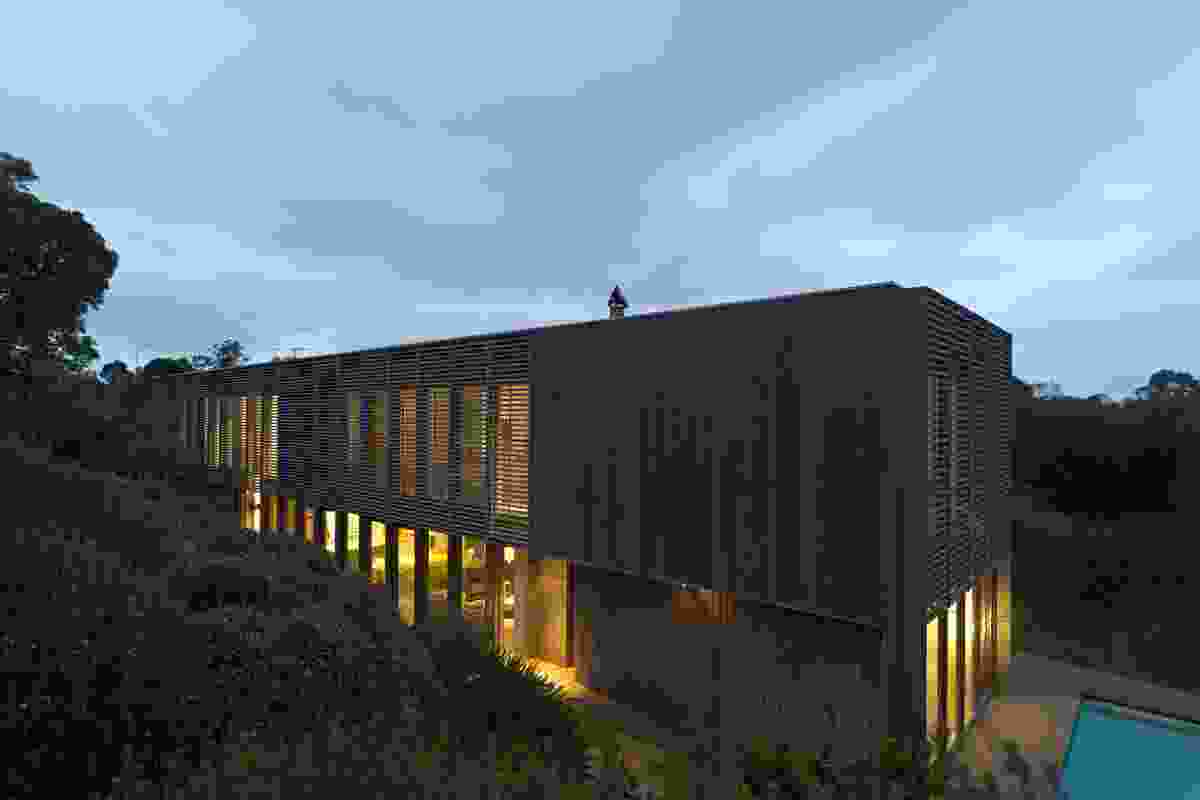 The north elevation light from within at dusk.