Allison Hopper deftly captures and contains the idyllic qualities of this weekender's setting in rural Victoria.

Ampelite cladding on the north face of this weekender filters light into the interior while masking unwanted views of the road.

On the other side of the world, a Dutch architect, famous for his buildings across the globe, recently curated an international architecture festival in Venice about the loss of “regional” architecture to the all-consuming facelessness of modernism. This “erasure of national identity” (Rem Koolhaas, Fundamentals, 2014 Venice Biennale) is said to be complex, not because it is hard to identify, but because the reasons for it, such as the internet, are so pervasive that the notion of architecture ever obtaining, or needing, “regionalism” again is doubtful. These thoughts followed me as I walked with architect and owner Allison Hopper through this perfect encapsulation of the argument.

Secreted behind a giant pine windbreak two hours from Melbourne towards Wilsons Promontory, this crisply detailed white box hovers poetically over terra firma, literally and philosophically avoiding contact with its site, while summoning the stream of European minimalism or Japanese infill housing that crowds every architect’s email inbox on a daily basis. This house is unashamedly modern and decidedly non-regional. This raises the question: what would an “Australian” response to this site be? A glass-and-tin shed touching the earth lightly, a heavy low-slung building of earthy tones and big verandahs? For Allison and her partner, both keen followers of the arts, the aim was to create a strong, sculptural and precise box, something that intensified the beauty of both the container and its setting by establishing the strongest possible contrast.

The house has a history almost as fraught as contemporary arguments for regionalism. After a long search in the area, Allison and her partner bought this site, complete with a six-metre-by-six-metre skeletal steel frame begun by another architect. After having it inspected by an engineer, they decided to accept the challenge and design a home around the existing structure. As it turned out, the frame was in worse shape than initially thought and after clearing out the rotting floors and removing temporary roofing, they discovered that nearly all of the members were twisted. This made construction an arduous process of discovery and remediation. Not that you can tell, however; every plane and junction in this compact plan is considered and each intimate space has been cleverly inserted to unfold with a fluid ease that belies the constraints imposed upon it.

On approach the house is dominated by a vertical wall of Ampelite on the north face. Pushing out from the primary mass and containing a spiral stair, this wall is one of only two instances where the container has been breached. This element lights up in the evening, guiding visitors safely past the edge of the dam, while during the day it floods the interiors with a diffuse natural light. Entry to the home is in the best weekender tradition, around the side through something akin to a back door, if it had a front one. This compact quarter of the floor plan is shared with the pantry, laundry and bathroom, a compression that is quickly released by the airy, double-height volumes of the kitchen and living areas. The voids in these spaces are a significant achievement given the tight plan and any sacrifice made to the still-generous upper floor is returned double on the ground floor.

Allison and her partner spent an entire summer camping on site, learning where the best views are, how winds cross the site and how the sun would pass across the house. Surely this is the “critical” in critical regionalism? It is no surprise, then, that each window and door feels as if it has been judiciously positioned, chosen to frame either long or short views appropriate to the space. In the dining area, a wall of glazed sliding doors stretching over both ground and first floors provides short views of a wall of pine trees, while long views for a spell of cloud gazing can be found by looking up through the void. The adjacent lounge room ends with the other deviation from the six-metre-by-six-metre boundary, a bay window jutting out from the plan to capture a long view down the valley, while carving a handy nook for the sofa. While there are no alfresco dining areas, or overtly clever blurring of transitions, both levels of the eastern face of the house can be opened to bring the nearby trees right inside. Intriguingly, windows on the north are completely absent. Considered the least attractive of the views, and also the approach by car, the view was edited out with the semitransparent Ampelite material, cleverly avoiding reminders of having to leave again so soon … and who could blame them? 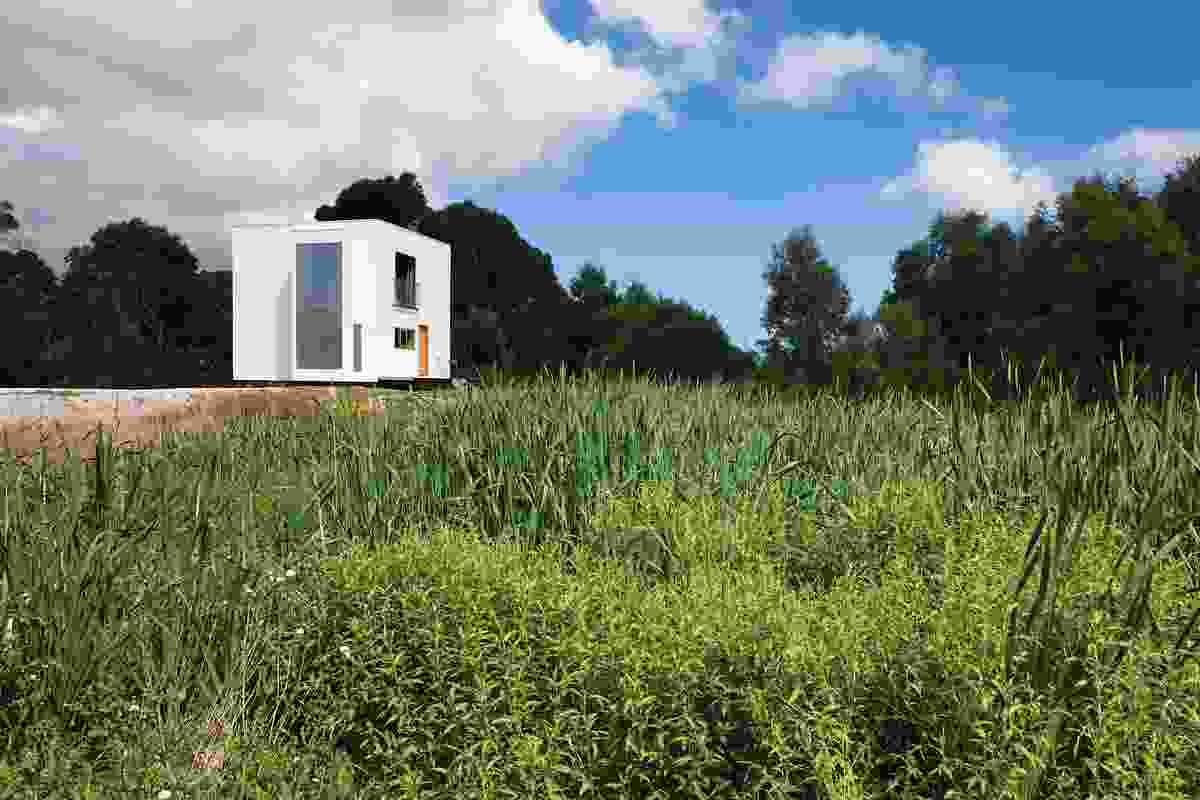 Ampelite cladding on the north face of this weekender filters light into the interior while masking unwanted views of the road. 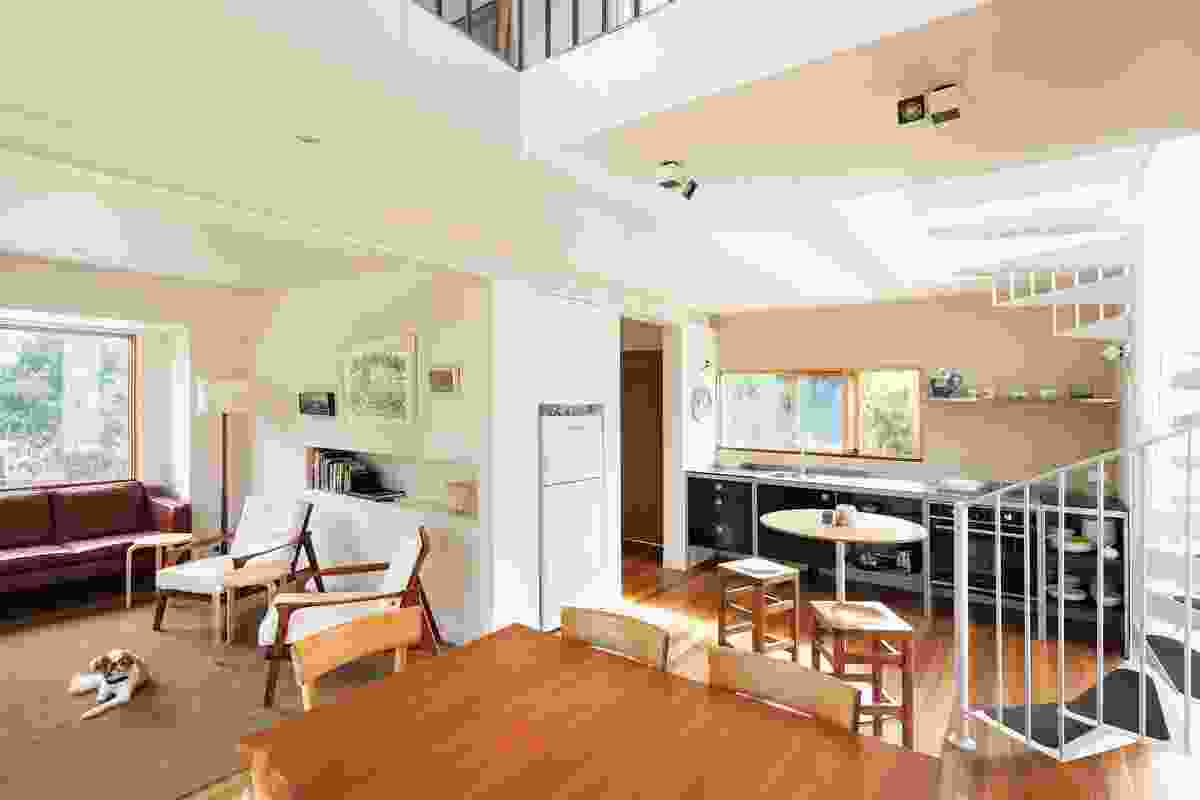 Airy, double-height volumes in the kitchen and living area lend this otherwise compact dwelling a sense of spaciousness. 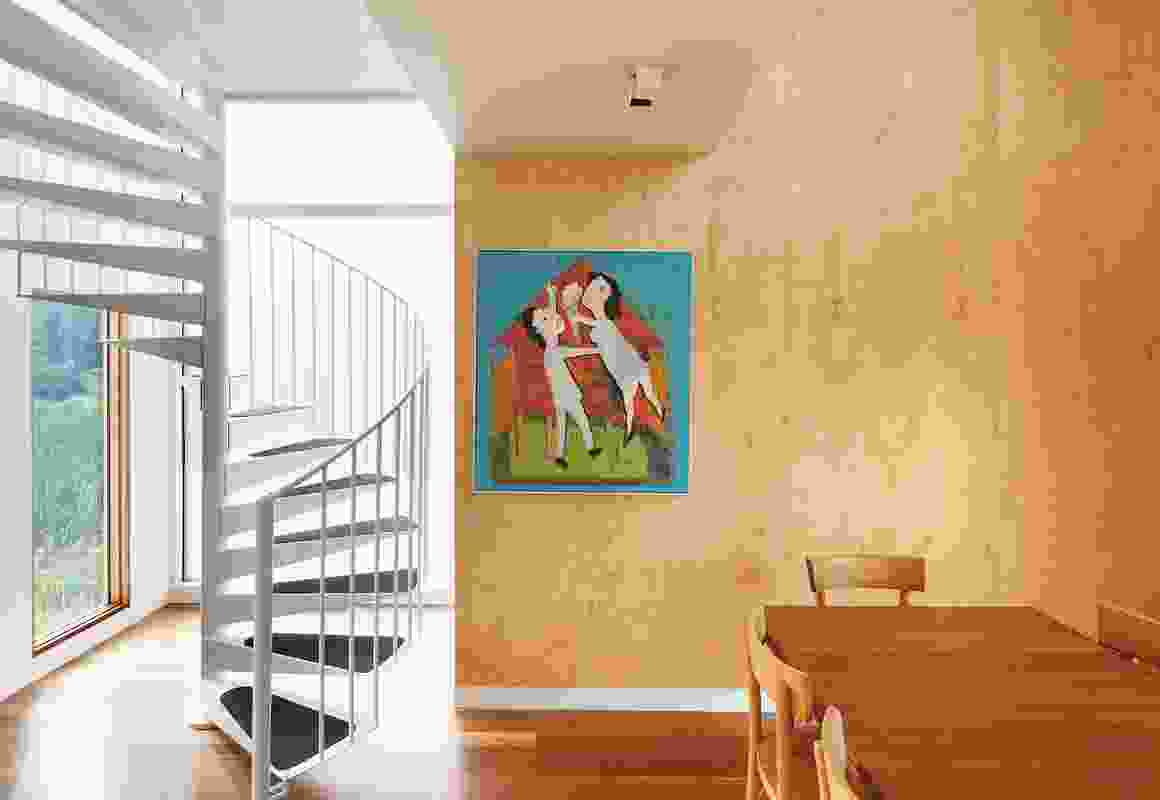 During the day, Ampelite cladding near the stairwell floods the interior with natural light. Artwork: Andrew Sibley, Rod and Sally In Love. 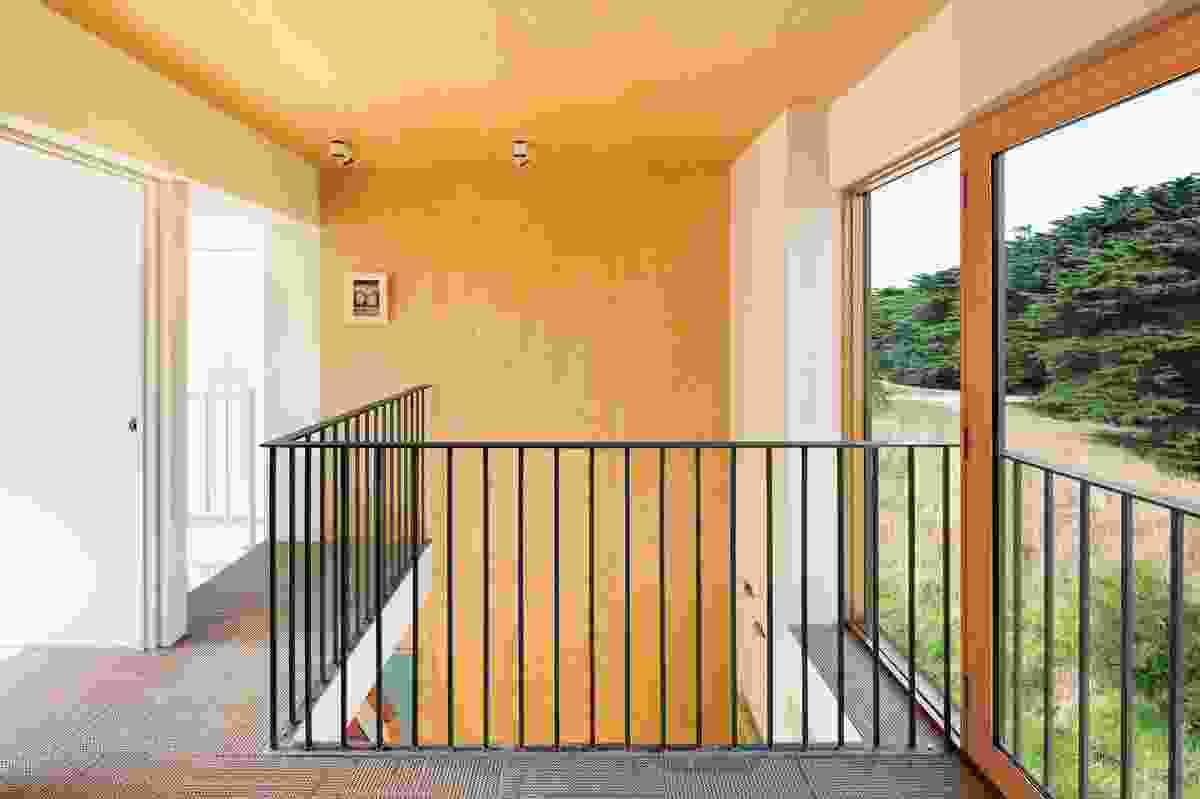 Ply cladding wraps up the wall and over the void of the living area, unifying the upstairs and downstairs spaces. 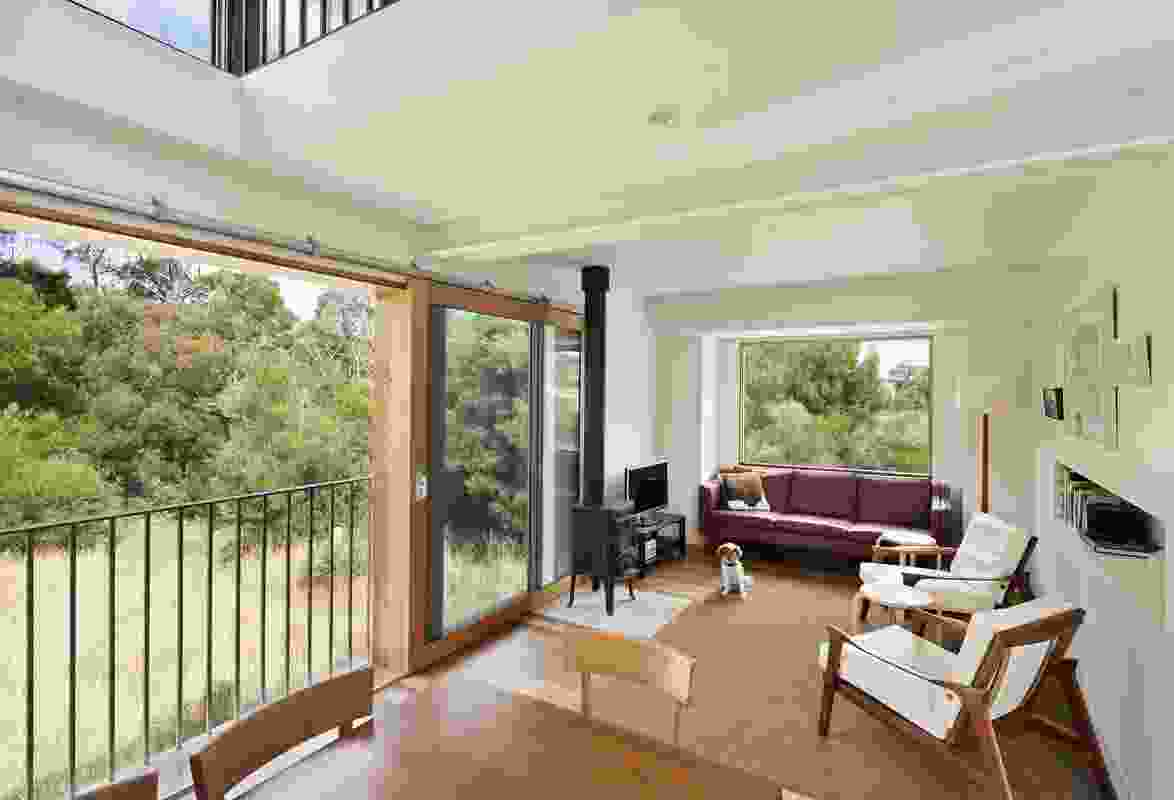 Each window and door has been judiciously positioned, chosen to frame either long or short views appropriate to the space. 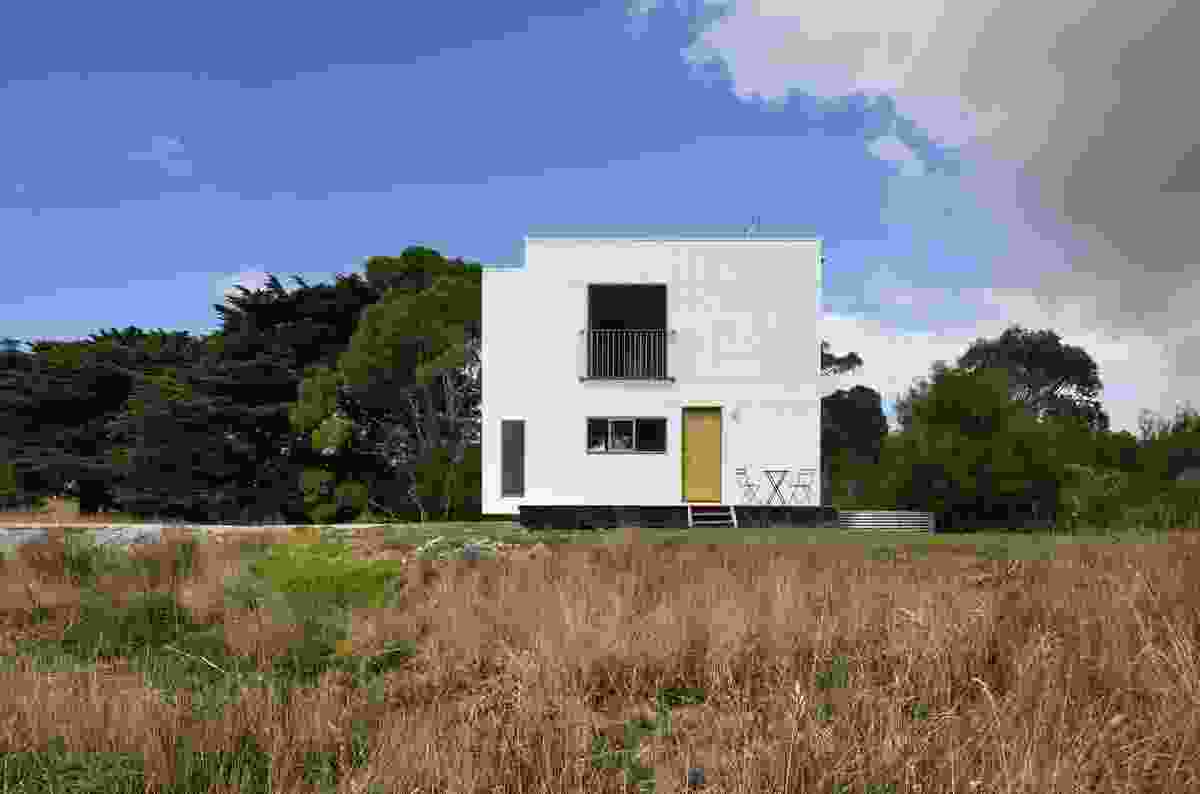 The aim of the project was to create a strong and precise box, something that intensified the beauty of both the container and its setting by creating a strong contrast between the two.