Presenting a curious, dark exterior to the street but with flowing light-filled spaces inside, this generous family home by ME is made from equal helpings of inventiveness and restraint.

When viewed from the street, the house appears as a dark box clad in compressed fibre cement sheeting and striped with battens.

The sunbelt of Queensland’s Gold Coast forms Australia’s sixth-largest city. While glittery apartment towers rise from the dunes and distended “blingy” mansions sit pompously on canals, the most noteworthy architectural endeavours of recent times hark back to the inventiveness of an earlier era; to mid-century modernism and to the informal simplicity of fibro beach shacks. The heritage of the city and its neighbourhoods in these terms is unquestioned, but rapidly disappearing as the drive to maximize property values erases these charismatic yet unaffected examples of beachside buildings. It is inspiring to find in the Francis Street House, located metres from the open surf, such authentic modesty and restraint in the design for a large family home.

Architect Matthew Eagle grew up on the Gold Coast. His professional practice has transformed his easy familiarity with the suburban landscape and its modern history into an attentive contemporary manifesto for building. His is an approach that knowingly references the past through the techniques of the present.

For the Francis Street House, Matthew carefully formed a defensive yet responsive solution. An arguably sober structure when rendered in the clarifying coastal light, the house is a dark box clad in compressed fibre cement sheeting and striped with battens that provide shadow to deeply emboss and texture the surface. The southern and eastern faces host boxes of white-painted fibre cement panels; projections that contain and shade the window openings. The south-most face houses a well-proportioned opening made from a combination of glazed and solid panels, and along the east is a longer ribbon of this same combination. The windows are off-the-shelf components but when set in the fibre cement panelled box and partnered with the solid panels of citrus hues of mid-century beach modern, any ordinariness is sublimated.

The streetscape is a muddle, assembled over time. Scaleless carports jostle at boundaries, poor neighbours to the bold divulgence of unfenced front yards that share the strip. Matthew opted to replay a simple contextual pattern of address. Interlocking with a modest lawn, the driveway of thin concrete tracks straddling a wider centre strip leads from the footpath to disappear under the almost imperceptible inscription of tilt-up panel in the front elevation. The secretive black box recedes in its concession to openness, absorbing the effects of off-street parking. In counterpoint, a delicate and layered white-painted fence set on a blockwork base steps up to the limits of the site.

The house is set as closely as allowable to the western boundary, pulled away from the neighbouring property to the east, in part for defensibility but also for aspect. Entry on foot is concealed from the street. A hint of a pathway landscaped like a beach track leads around the corner and along the western edge, to a door at the midpoint of the building form.

Entering the house, the memory of the sober box dissolves in the realization of a light-filled, generous and flowing interior space. Through the front stable door (the surprise of a standard door bisected), space opens above to the full height of the dwelling. Here, the clear-finished plywood stair that leads up to bedrooms is designed to offer a space of functional circulation along with the volume for climatic relief, but also for play and display: every second tread in the lower half-flight is drawn across to form stepped platforms. At the half landing, another pause suggested by a boxed banquette could be a place to sit, or another plinth for display. A plywood bridge disburses to the upper-level bedrooms and bathrooms spanning the void over the entry, and is naturally illuminated by a plywood-lined light well.

Back on the ground floor, a right turn from the entry leads to the laundry and garage, while a left turn leads through to the open living, eating and kitchen area. This bright white volume opens on two sides to the outdoors – to the west is a narrow strip of garden that elbows into a utility space at the rear of the home; to the east, a grassy court that leads to a swimming pool. The glazed eastern edge of the living space is stepped back such that it receives its protection from the overall building form. The strategy of climatic control through subtle projections and deep recessions to protect openings is effective and aesthetically smart.

The interiors are elegant in their restraint: taut plaster walls and ceilings, with clear-finished concrete floors on the ground level and glossy ply floors upstairs. Ply also highlights the staircase space and the bridge between sleeping quarters, separating a cute combination of two bedrooms and shared breakout space and bathroom to the south, and parents’ bedroom and seamless dressing and bathing suite to the north.

This house is the outcome of five years of toing and froing between client and architect as designs were reworked and details refined. An inventive prudence determined the form, material and detail of the house; making things special, mindful of means. Francis Street House offers noteworthy lessons to homebuilders in any setting, as the clarity of the result arises out of an impressively subtle understanding of context, climate and construction. 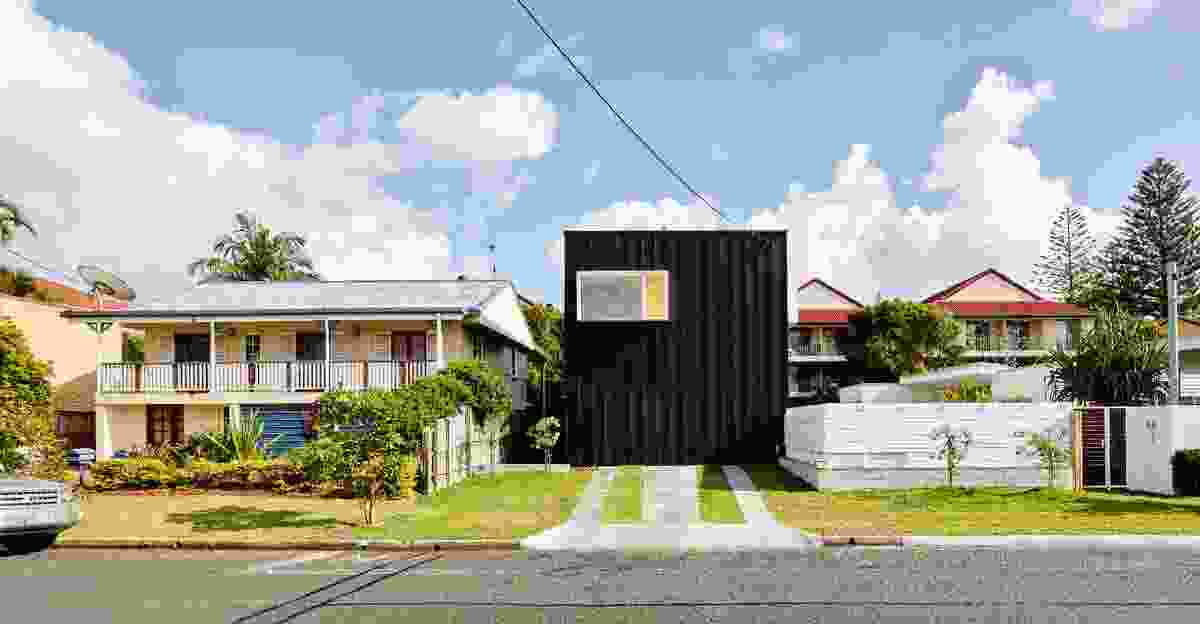 When viewed from the street, the house appears as a dark box clad in compressed fibre cement sheeting and striped with battens. 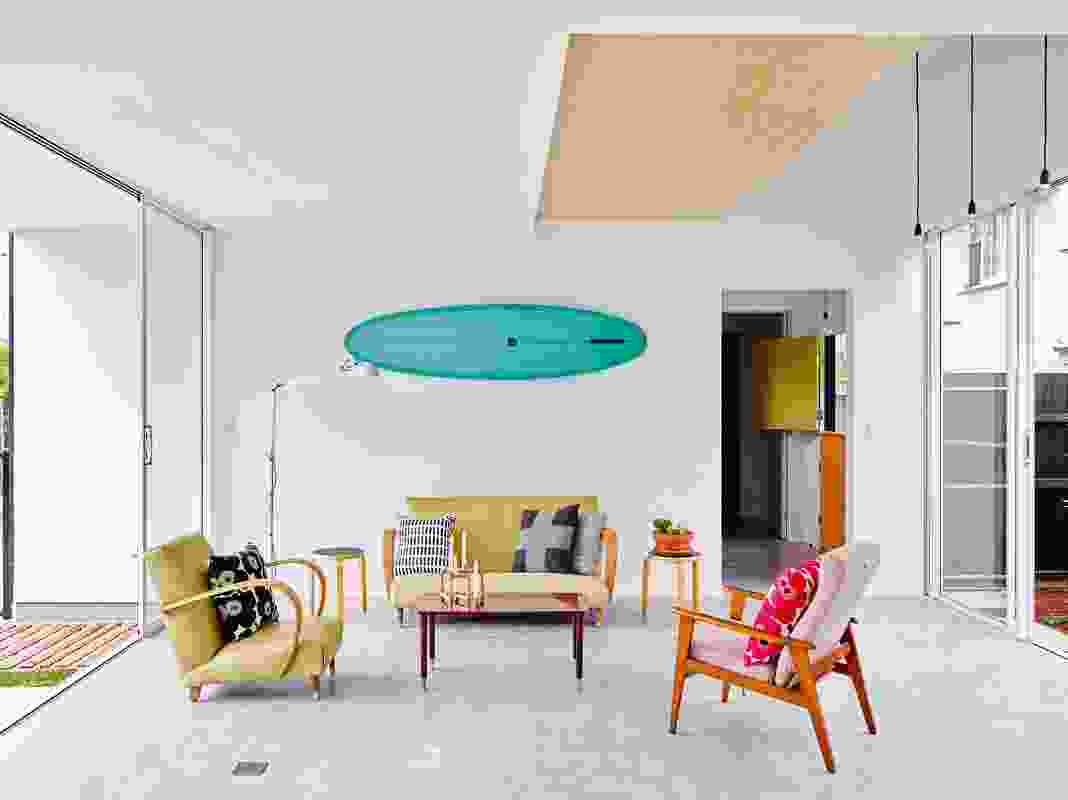 Once inside, any memory of the serious, dark exterior is replaced with generous light-filled, open interior spaces. 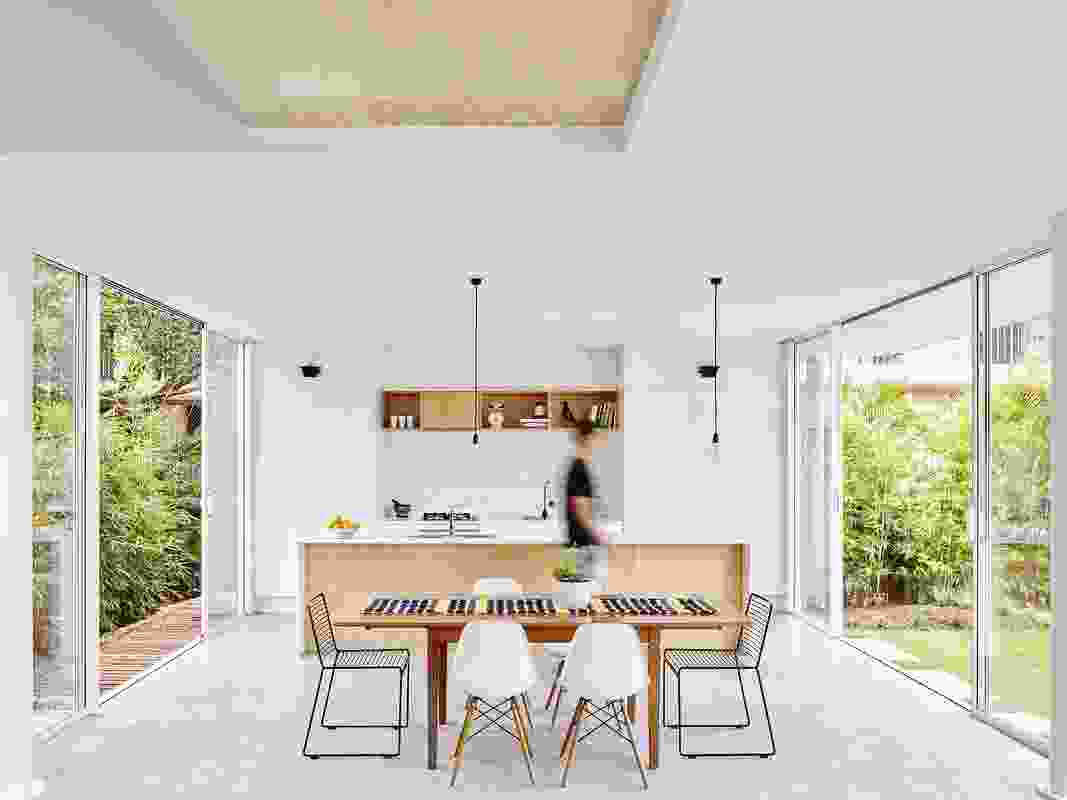 The plywood of the kitchen’s island bench is reflected above in the bridge between the sleeping quarters. 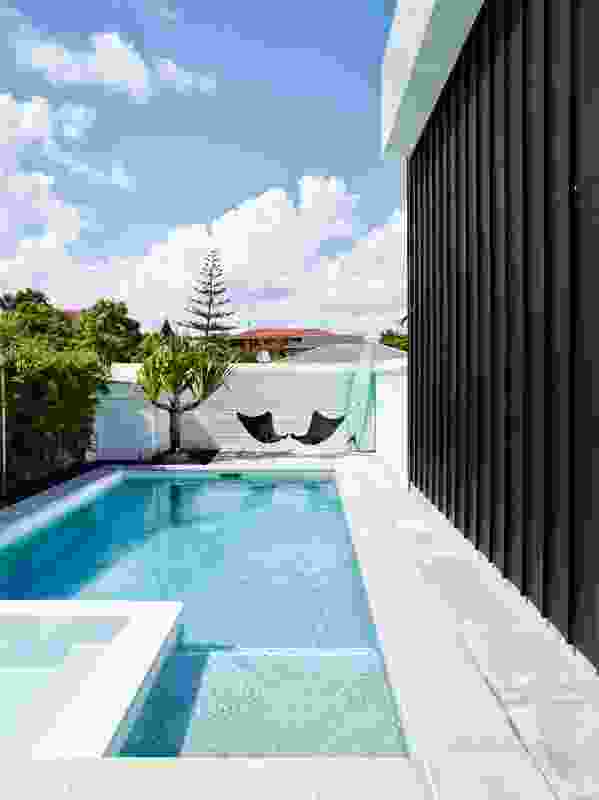 Bounded on one side by the dwelling’s batten-clad exterior, a grassy court leads to a swimming pool, offering a private spot to relax. 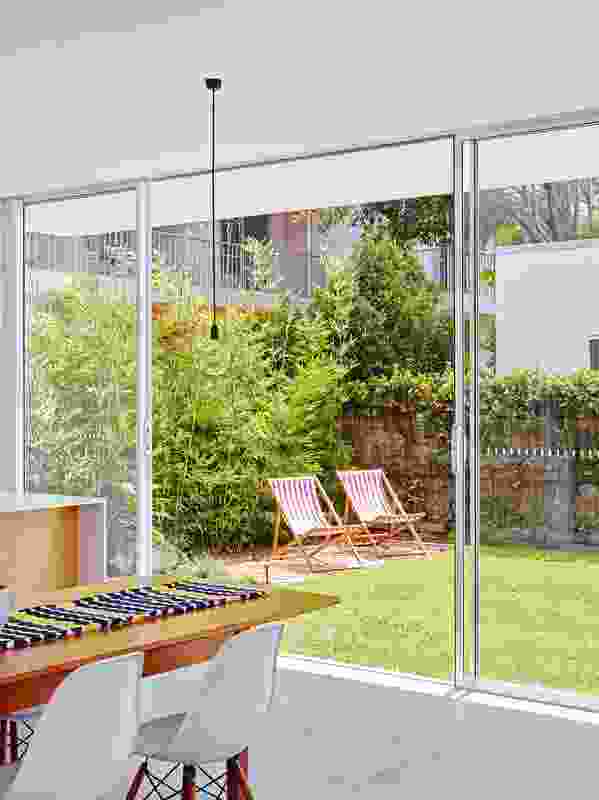 The glazed eastern edge of the living space is stepped back to receive protection from the overall building form. 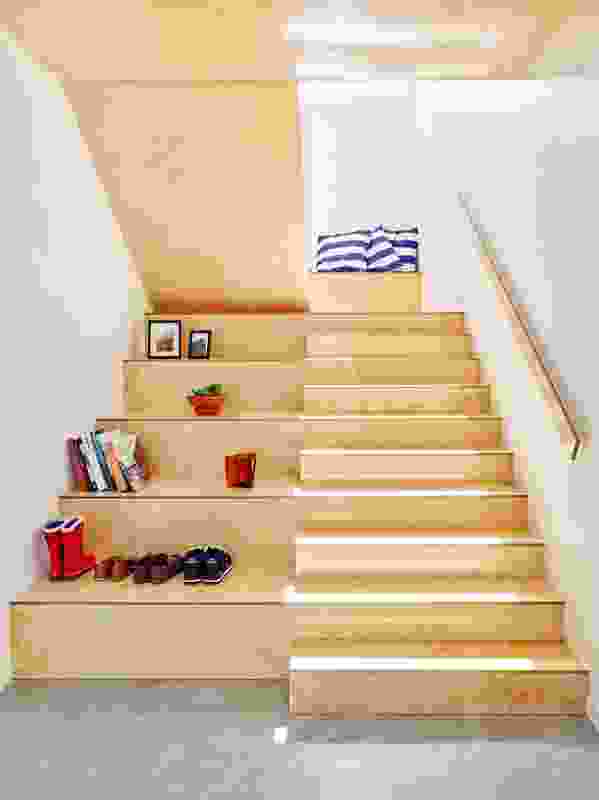 The plywood stair that leads up to bedrooms is designed not only for circulation, but also for play and display. 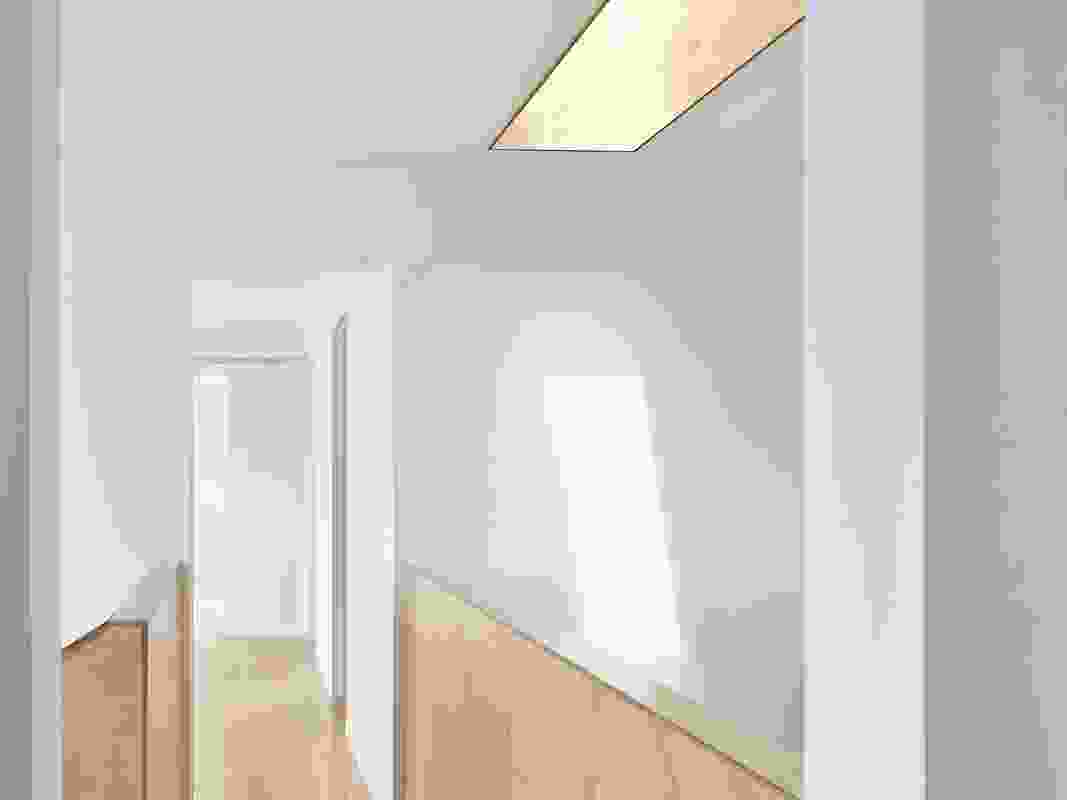 A ply-lined light well illuminates the void over the entry. 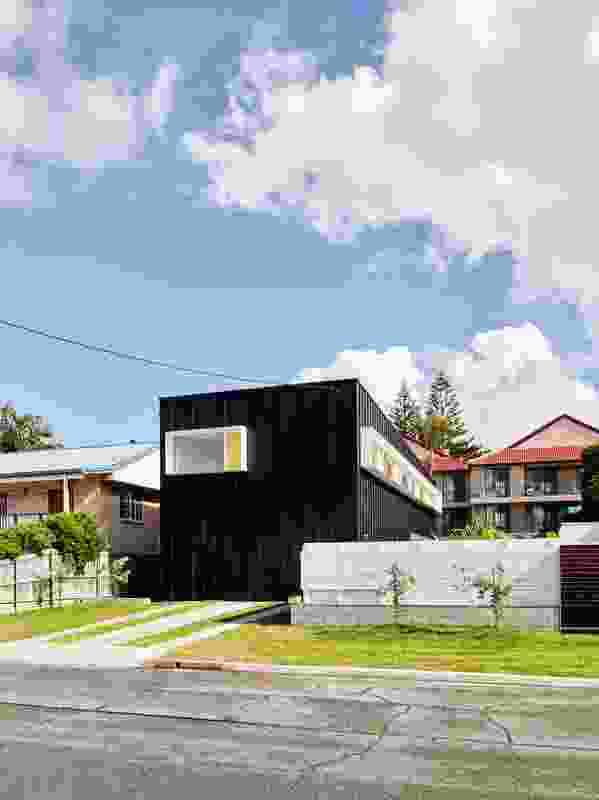 The home’s southern and eastern sides host boxes of white-painted fibre cement panels that contain and shade the window openings.